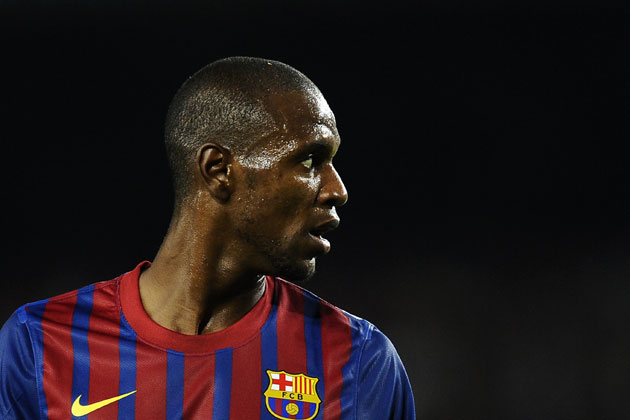 Éric Sylvain Abidal is a French retired professional footballer who played as a left back or a central defender. In his career, he played mainly for Lyon and Barcelona, winning 18 titles with both teams combined including two Champions League trophies with the latter. His later career was marked by liver disease, resulting in a transplant. A French international across nine years, Abidal represented the nation in two World Cups – finishing second in 2006 – and Euro 2008. 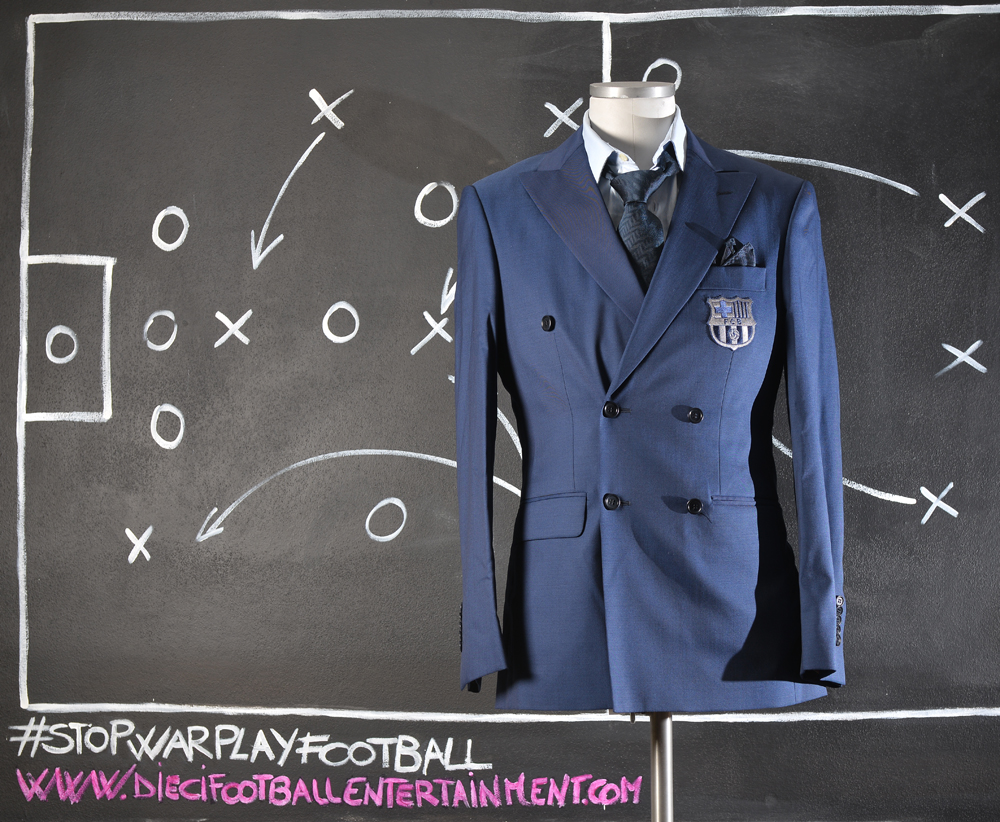 The 2013-2014 official Barcelona F.C. first team’s suit was made by Sacoor Brother a Portugal based fashion company well-known for having dressed high-profile personalities in fashion, cinema and television. The official shooting was made to the Nou Camp. All of the suits were custom made for every players. Moez Sacoor, company’s partner revealed some details about some player’s likes. Messi, for example, has his own way of wearing suits. David Villa has a more relaxed way. So the suits were all customized. 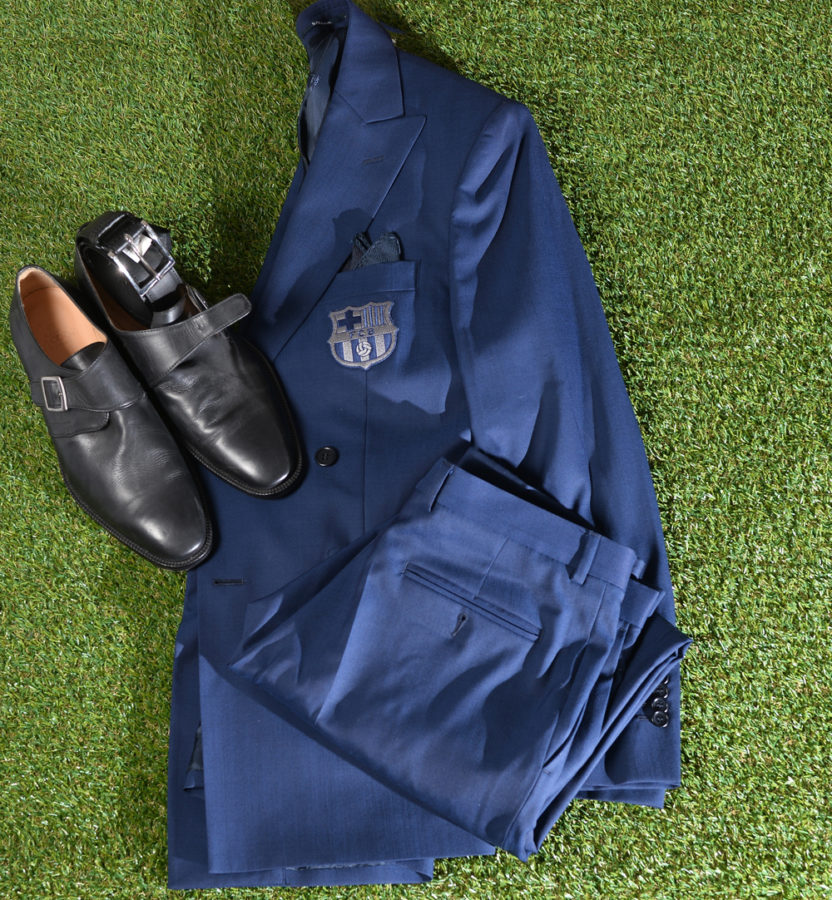 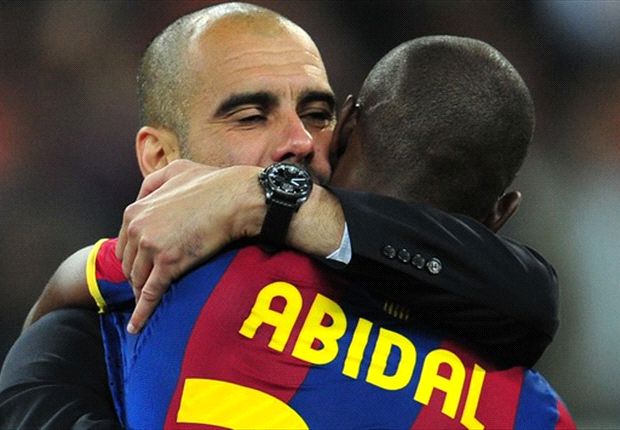 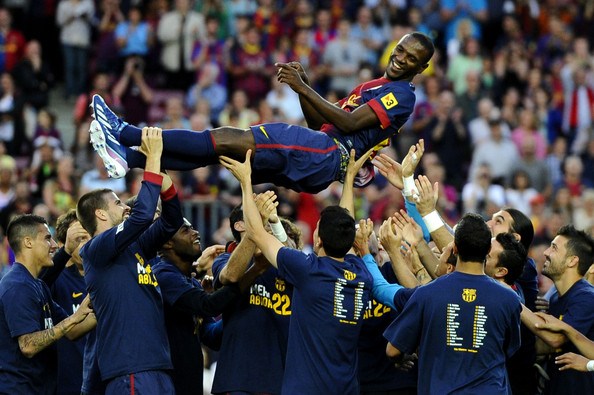 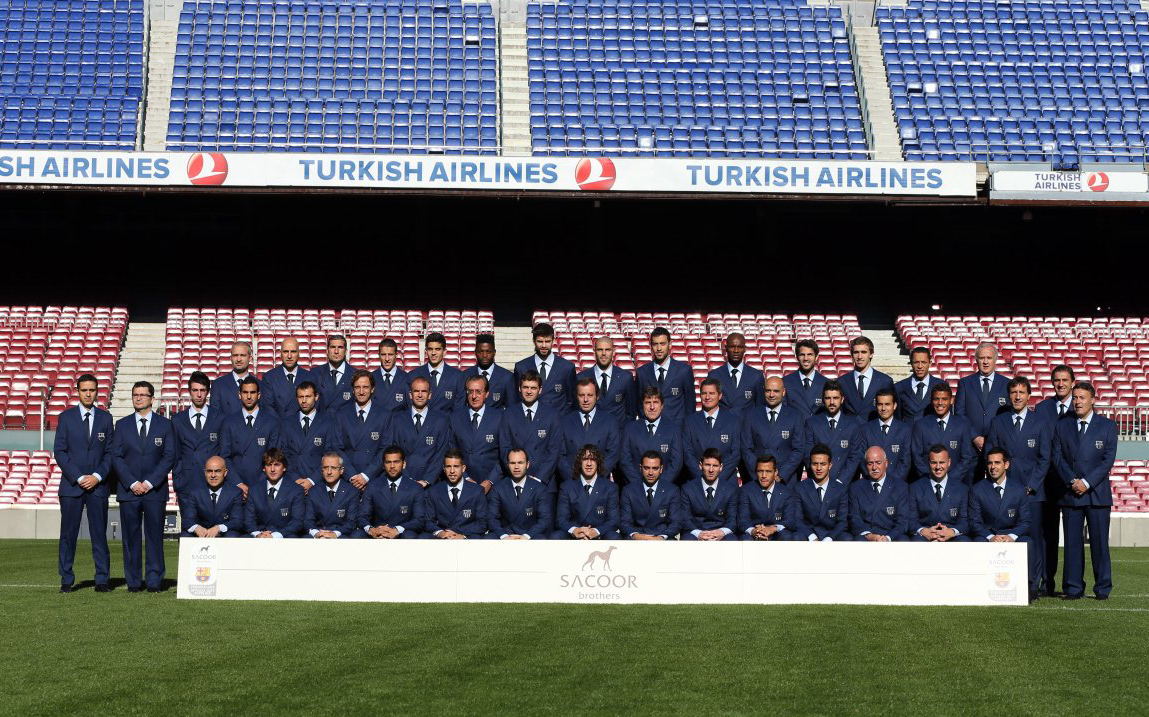 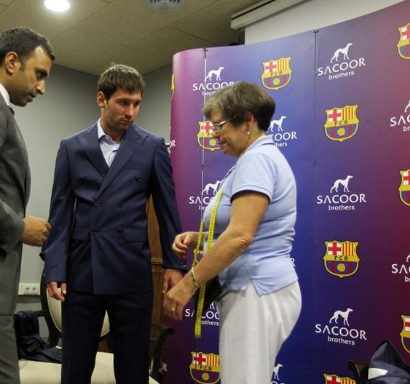 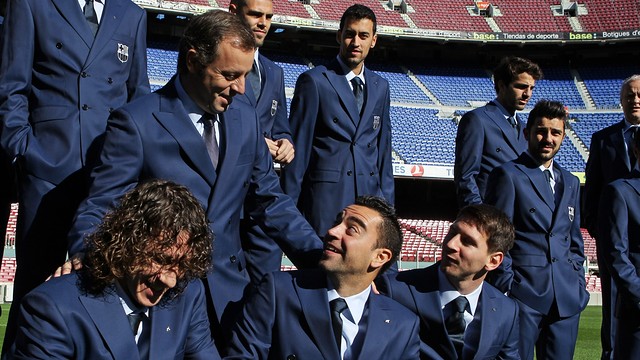 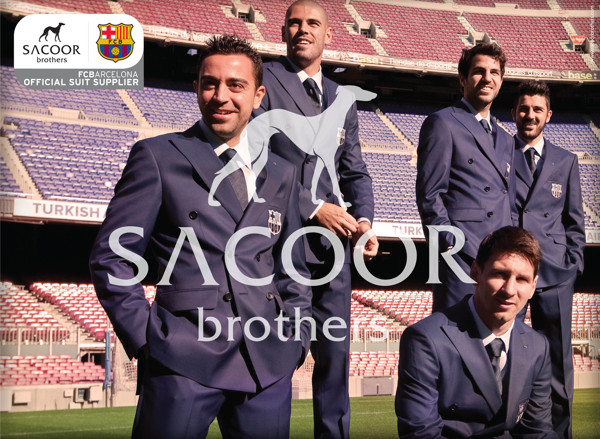 On 29 June 2007, Abidal signed a four-year contract with FC Barcelona for €9 million, after repeatedly stating that he would not return to training with Lyon if he was not allowed to move. He was given the number 22 jersey, as the number 20 he wore at Lyon was already taken by Deco; club president Joan Laporta also mentioned that his contract contained a €90 million release clause, and that Lyon would receive an extra €500,000 if Barcelona won the UEFA Champions League in any of the following four seasons. Abidal made his La Liga debut on 26 August 2007 in a 0–0 away draw against Racing de Santander, and completed his first season with 30 games as Barça finished in third place in the league.[14] He missed the 2009 Champions League Final against Manchester United after picking up a red card in the semi-final against Chelsea: the referee deemed Abidal to have fouled countryman Nicolas Anelka and denying a scoring opportunity, although video evidence suggested that any contact was minimal; again through suspension he also did not dress up for the decisive match of the Copa del Rey, as the team won the treble. In 2009–10, Abidal continued to be the starter for the Pep Guardiola-led side, even after the arrival of Maxwell from Internazionale. He scored his first goal on 5 January 2011, netting at the San Mamés Stadium in the Spanish Cup round-of-16 second leg (1–1 away draw, away goals rule qualification).  On 18 January 2012, Abidal scored his second goal for Barcelona, also in the domestic cup, helping the visitors come from behind to win it 2–1 at Real Madrid (eventually 4–3 on aggregate). He renewed his contract early into the following month, keeping him at the Camp Nou until 30 June 2013, but on 30 May of that year it was announced that the club would not further extend it. 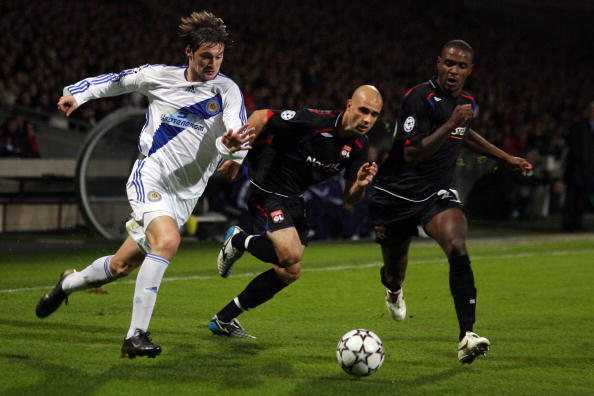 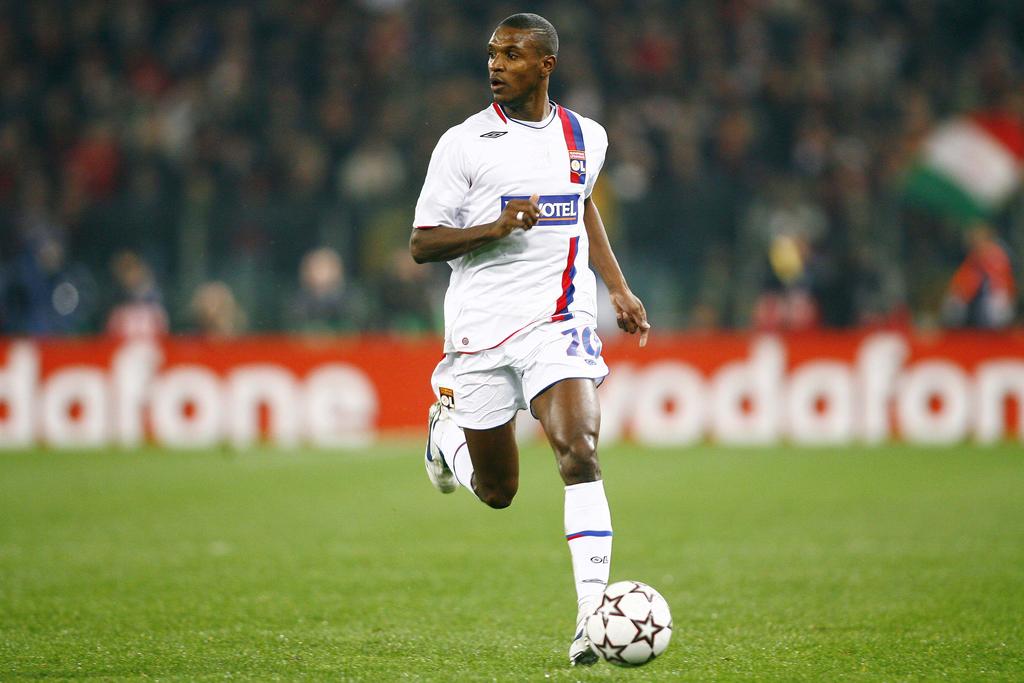 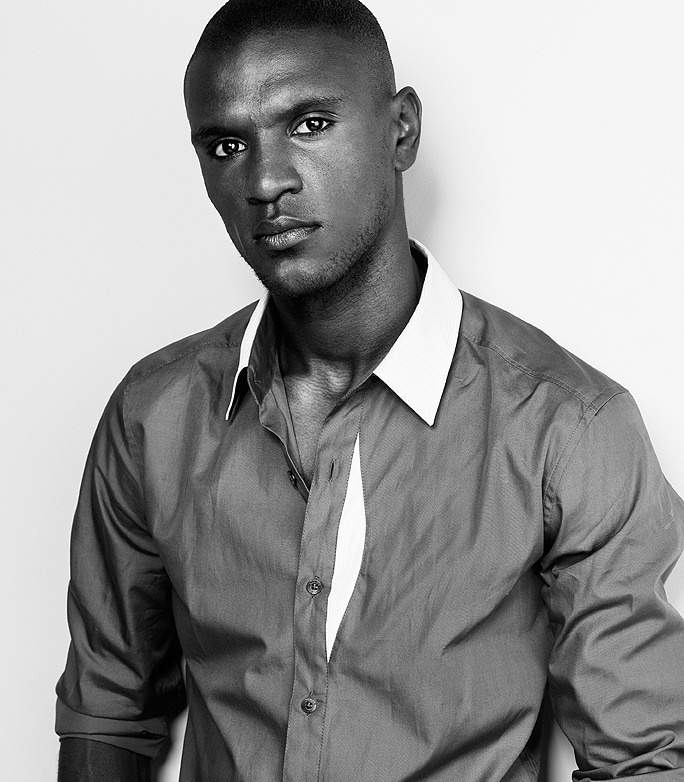 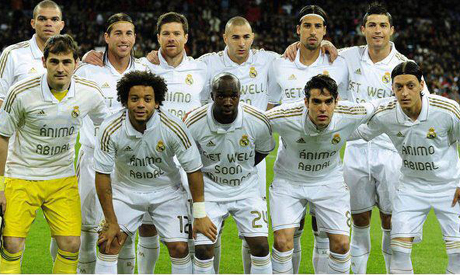 Abidal was a tactically intelligent and versatile defender, capable of featuring as a centre or left back due to his positional sense and his ability to read the game. In his prime, he was also quick and strong which, along with his technical ability and distribution, allowed him run up the wing to assist his team offensively as well as defensively. On 15 March 2011, Barcelona announced that Abidal had been diagnosed with a tumour in his liver, and the player underwent surgery two days later. Citing privacy concerns as wished by the player, the club did not release additional information in regards to his condition. In response to the announcement, players and fans around the world dedicated well wishes to him on various social networking service and sports websites. Before their round-of-16 match in the Champions League, both Real Madrid and Lyon players took the pitch wearing Ánimo Abidal (Get Well Abidal) T-shirts, with the same message being displayed on the Santiago Bernabéu Stadium’s scoreboards, in a show of support and solidarity. During Barcelona’s match with Getafe CF on 19 March 2011, the fans at the stadium clapped for the entire 22nd minute (the player’s shirt number). On 28 May 2011, in the Champions League Final against Manchester United, he played the full 90 minutes of Barcelona’s 3–1 triumph and, in a gesture to mark his recovery, Carles Puyol handed him his captain’s armband and allowed him to be the first to lift the trophy in front of 85,000 people at Wembley Stadium in London. On 15 March 2012, it was announced that Abidal would have to undergo a liver transplant because of problems which were unresolved with the previous operation. On 10 April he underwent surgery, with his cousin Gérard being the donor. On the same day Barcelona beat Getafe 4–0, and the victory was dedicated to the player in the post-game press conference; he later revealed that his friend and teammate Dani Alves offered to donate part of his liver for the transplant, but he denied because it would have affected the latter’s playing career. On 21 May 2012, Abidal was released from hospital to resume the recovery process at his home, and doctors revealed that he could still play football in the near future if he wished. He returned to training in the Pyrenees in October 2012 but, the following month, he stated that his priority was a return to full health rather than resuming his football career. On 18 December 2012, Abidal was given the green light to start training again, and he returned to active in January of the following year. On 19 March of the following year he played 65 minutes for FC Barcelona B in a practice match with FC Istres. 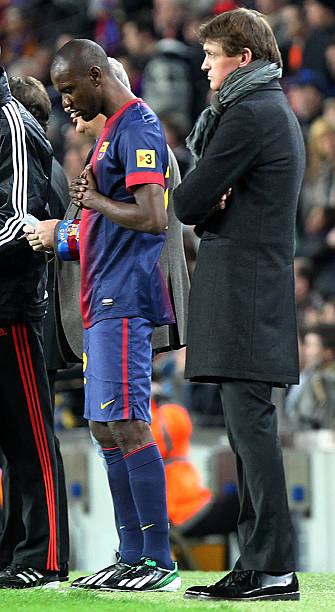 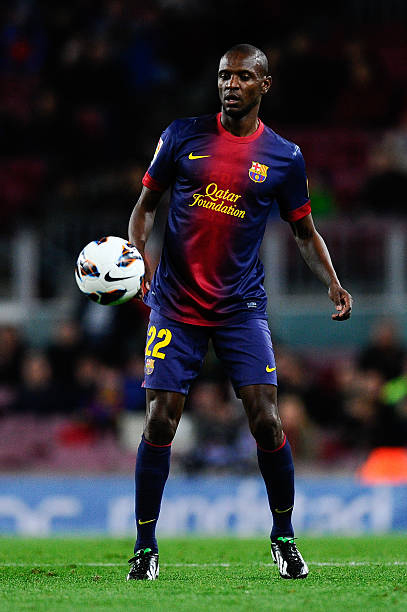 These boots were worn by Eric Abidal uniquely on April 6th 2013 while the player returned to official play, replacing Gerard Piqué for the last 20 minutes of a 5–0 home win against RCD Mallorca. Two weeks later Abidal played the full 90 minutes for the first time since his comeback, featuring in a 1–0 home success over Levante UD. 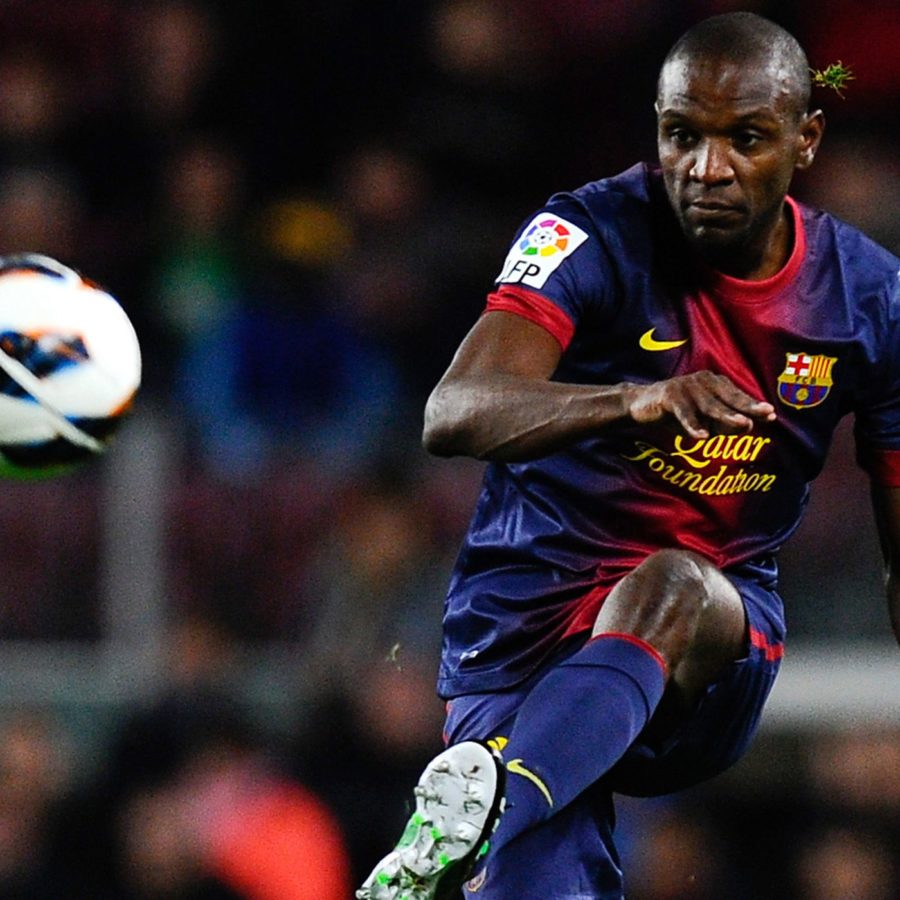 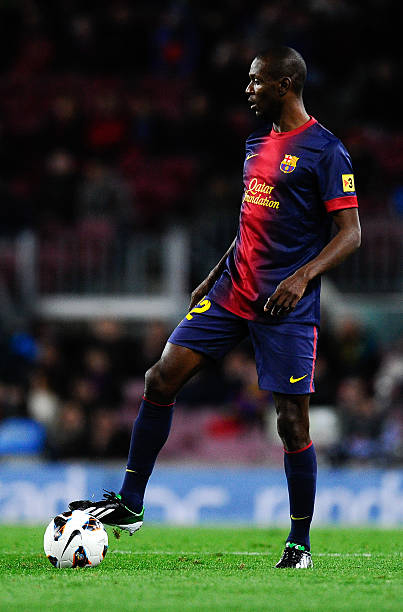 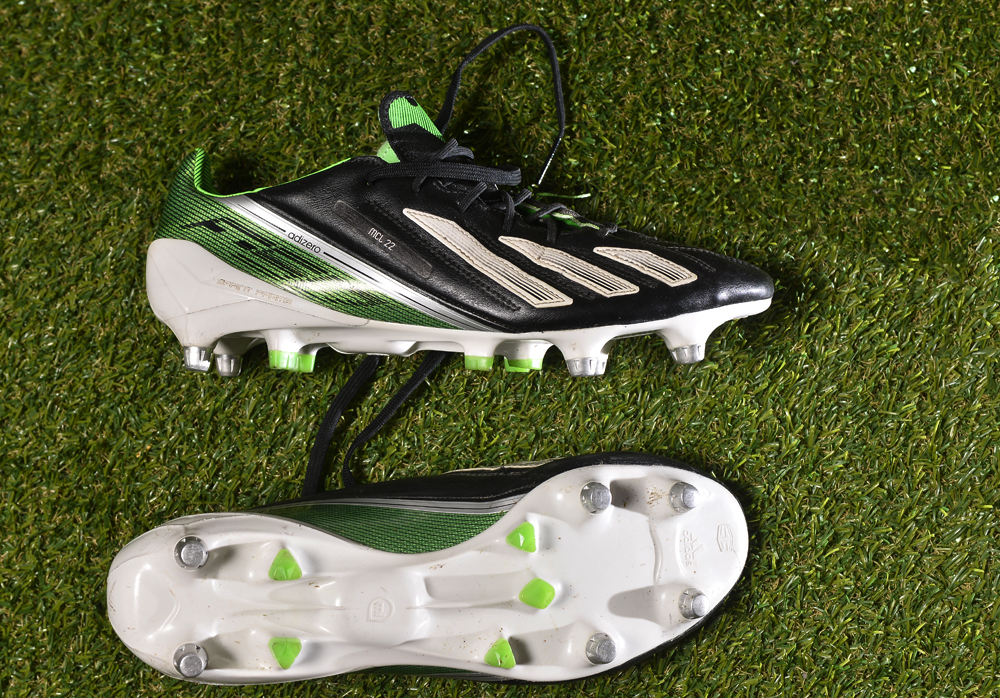 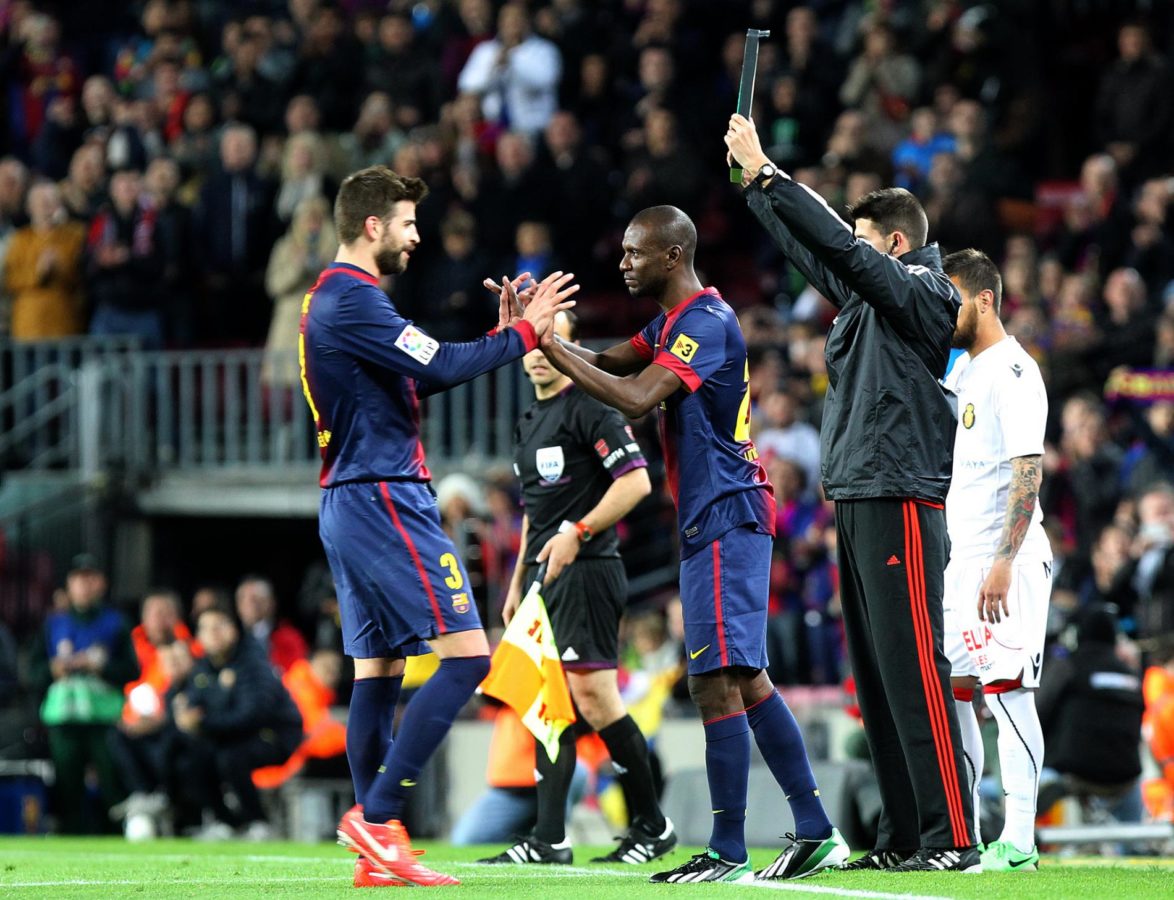 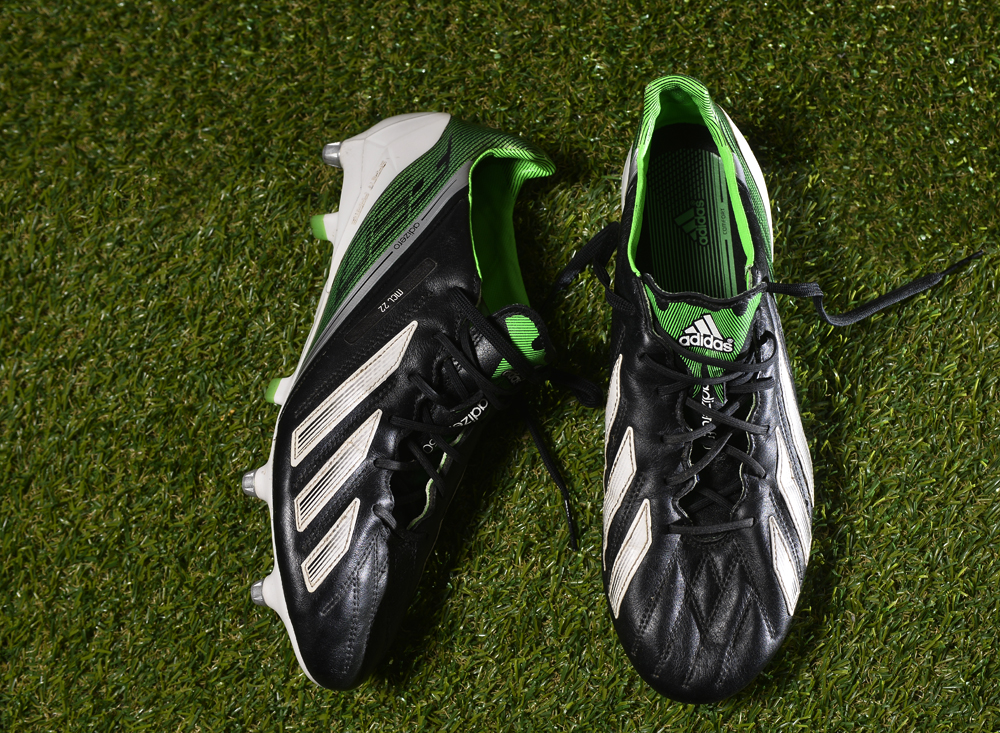 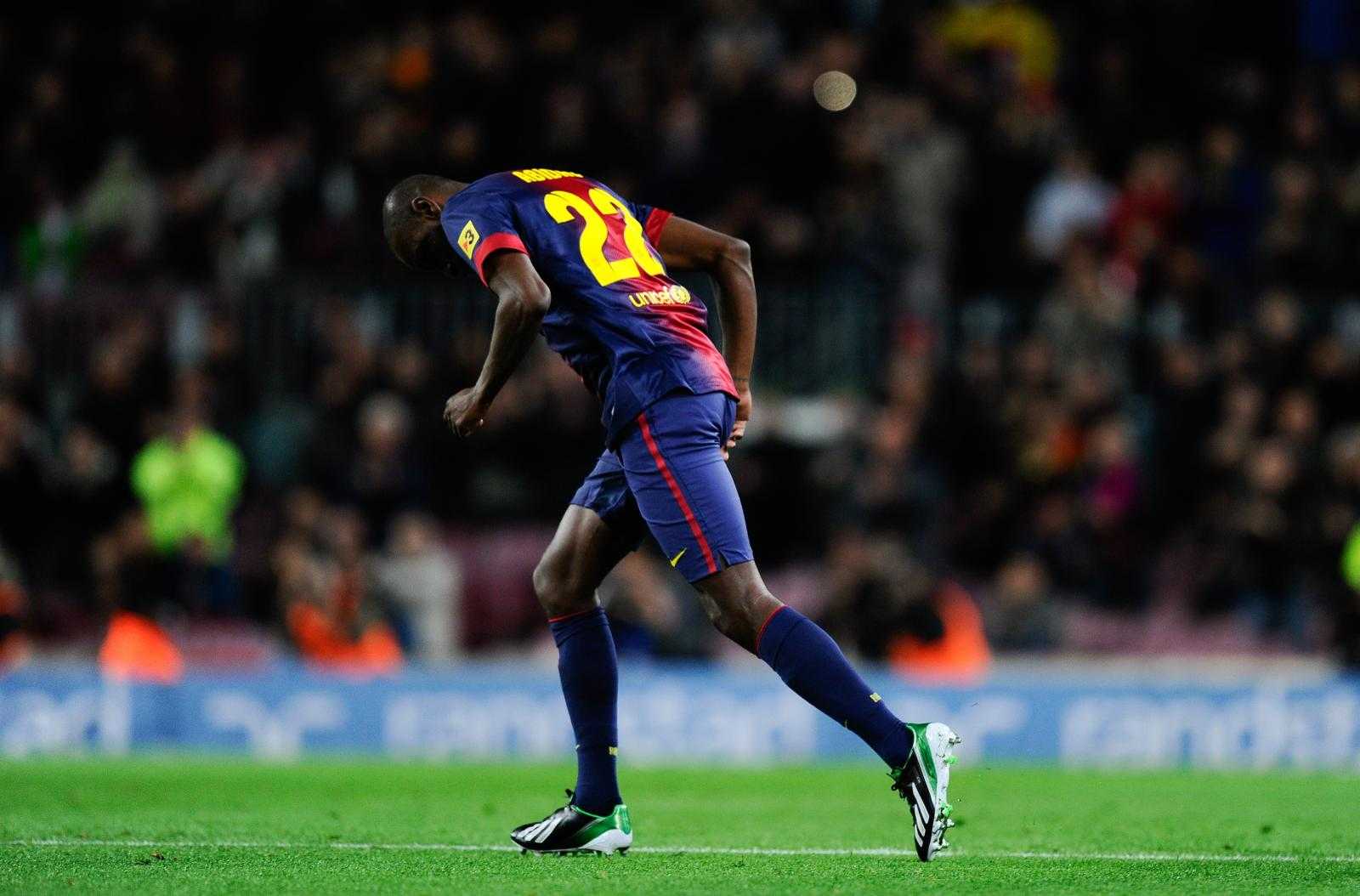 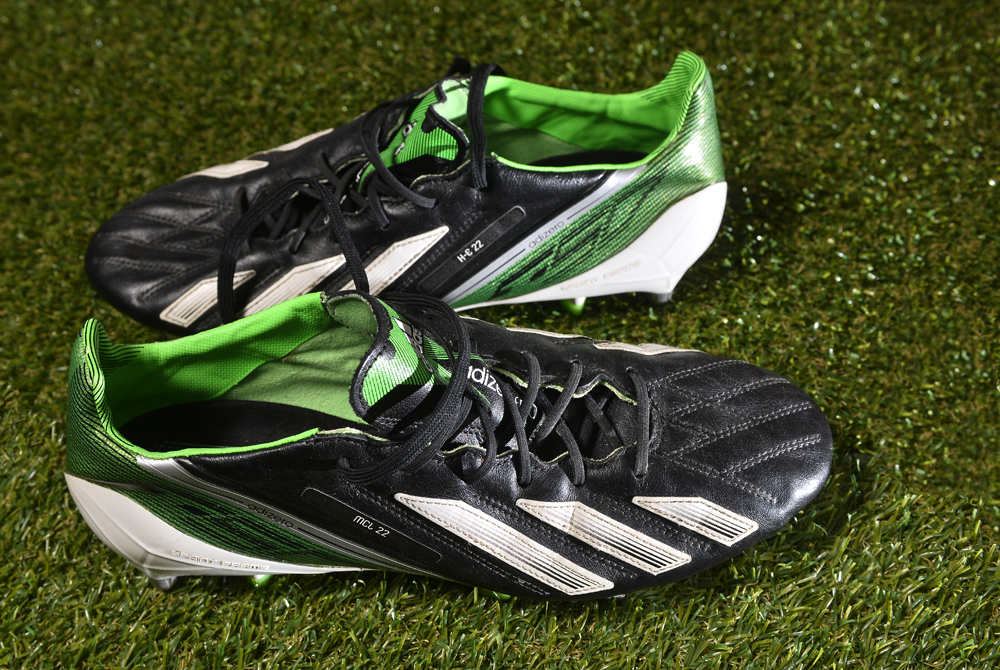 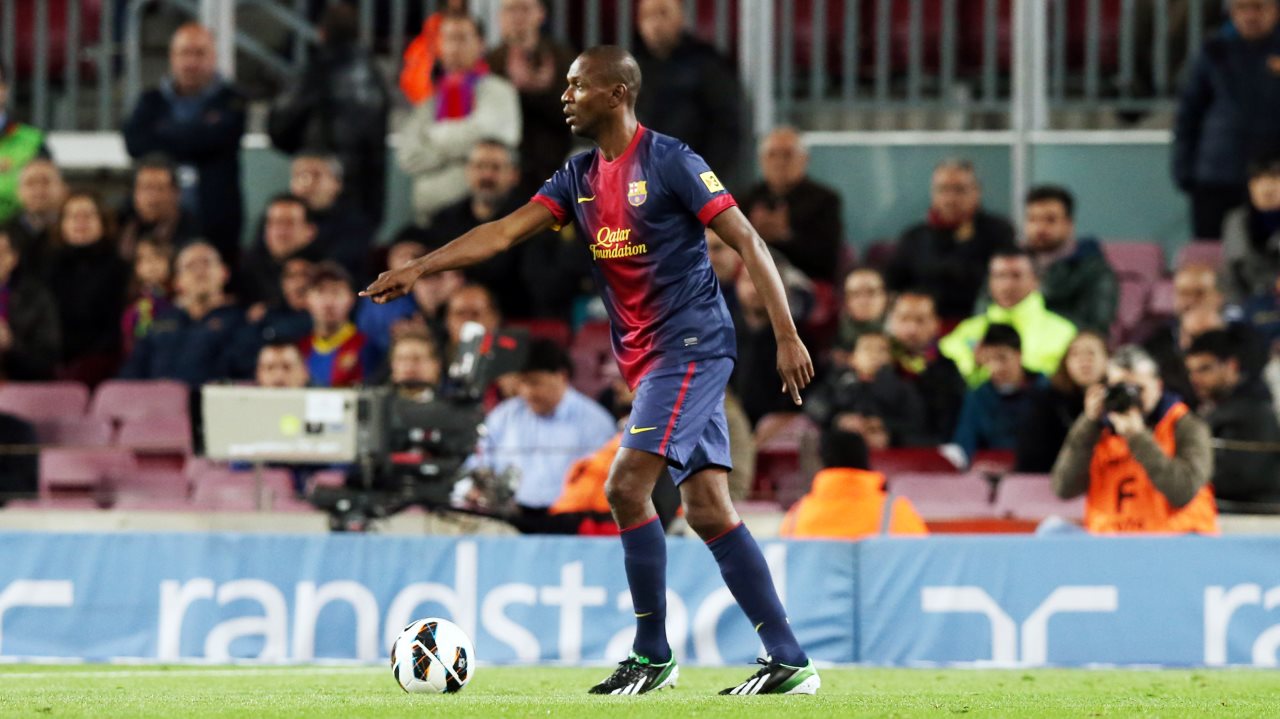 Grosso Grosso2019-03-29T22:43:23+00:00
Page load link
This site uses cookie technology, including third parties' ones. If you want to know more click here. If you access any element of this site outside this banner, you consent to the use of cookies. Ok
<script type='text/javascript' src='https: