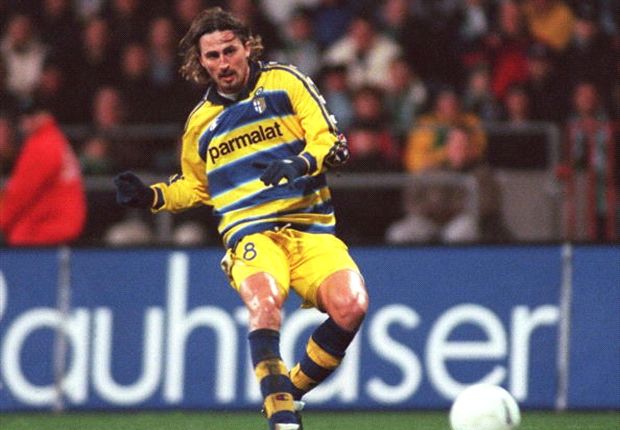 Dino Baggio is an Italian former professional footballer who played as a defensive midfielder. Throughout his club career, he won the UEFA Cup three times, twice with Parma and once with Juventus. He obtained 60 caps at international level for Italy, and was part of the team that reached the final of the 1994 FIFA World Cup; he later also represented Italy at UEFA Euro 1996, and at the 1998 FIFA World Cup. Despite sharing a last name, he has no relation to fellow Italian former footballer and team-mate Roberto Baggio. 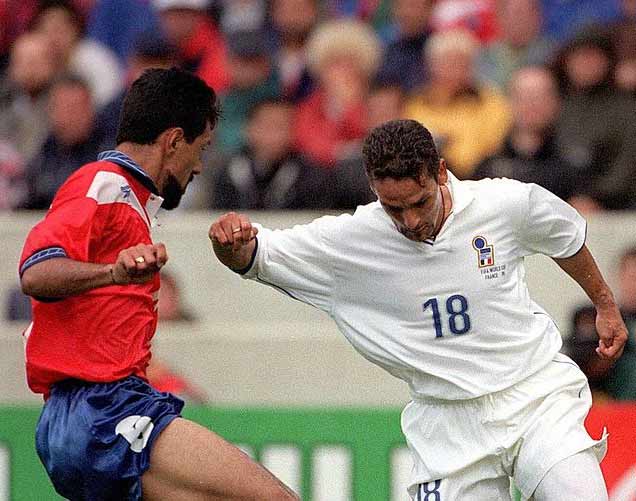 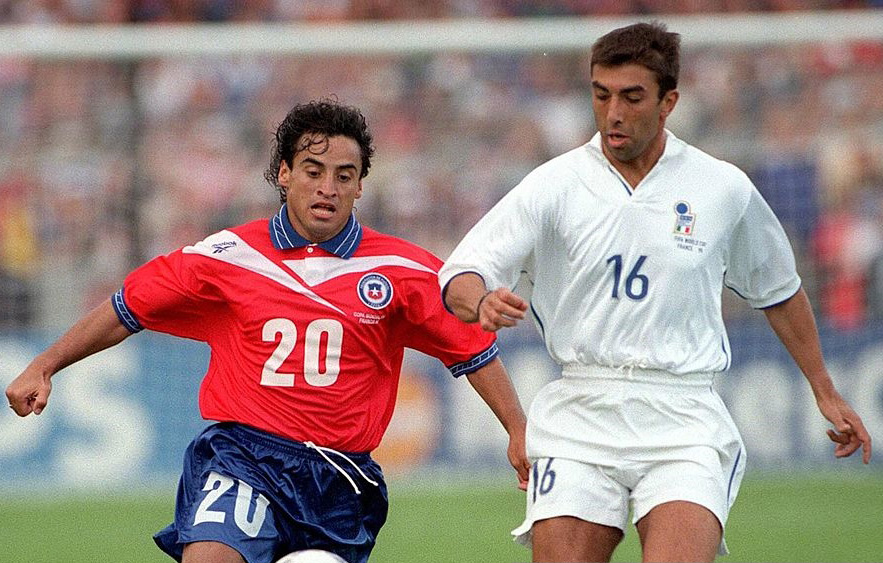 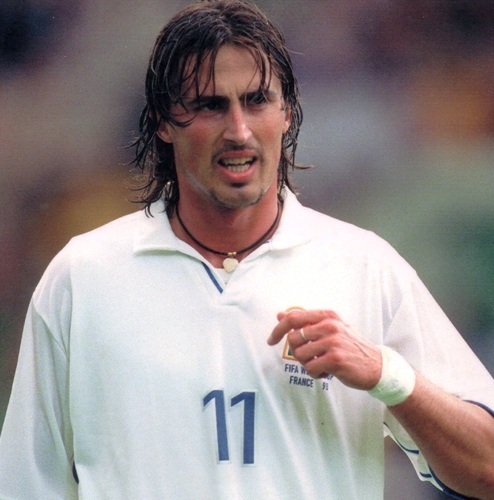 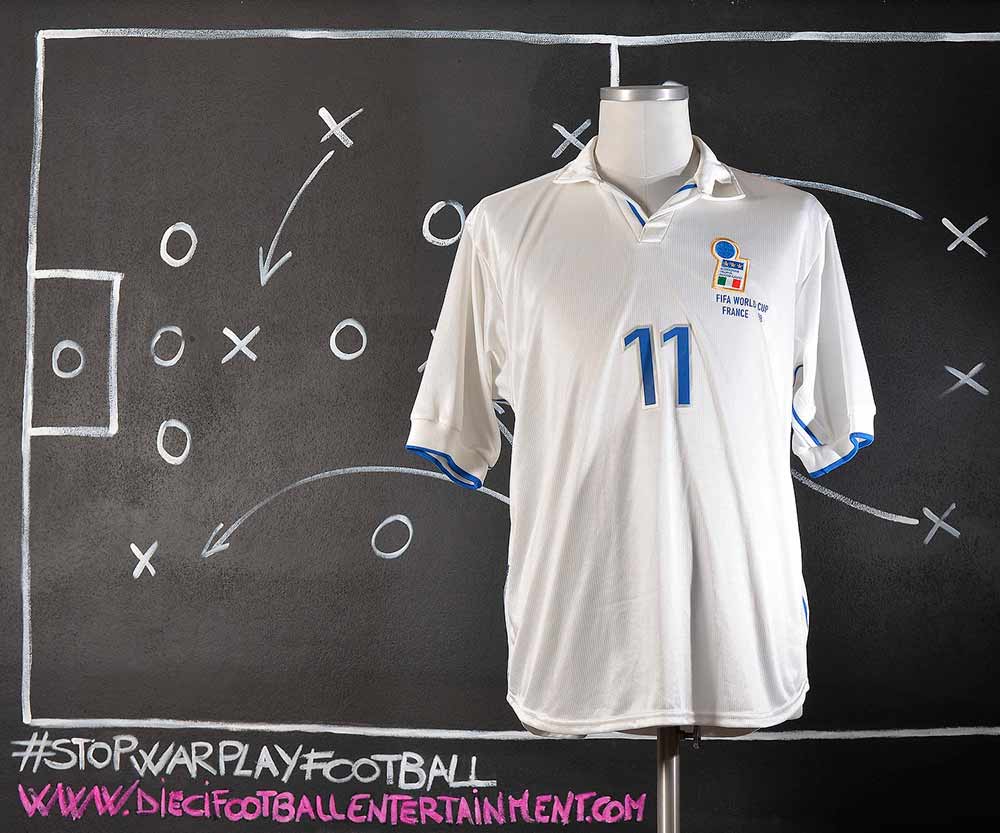 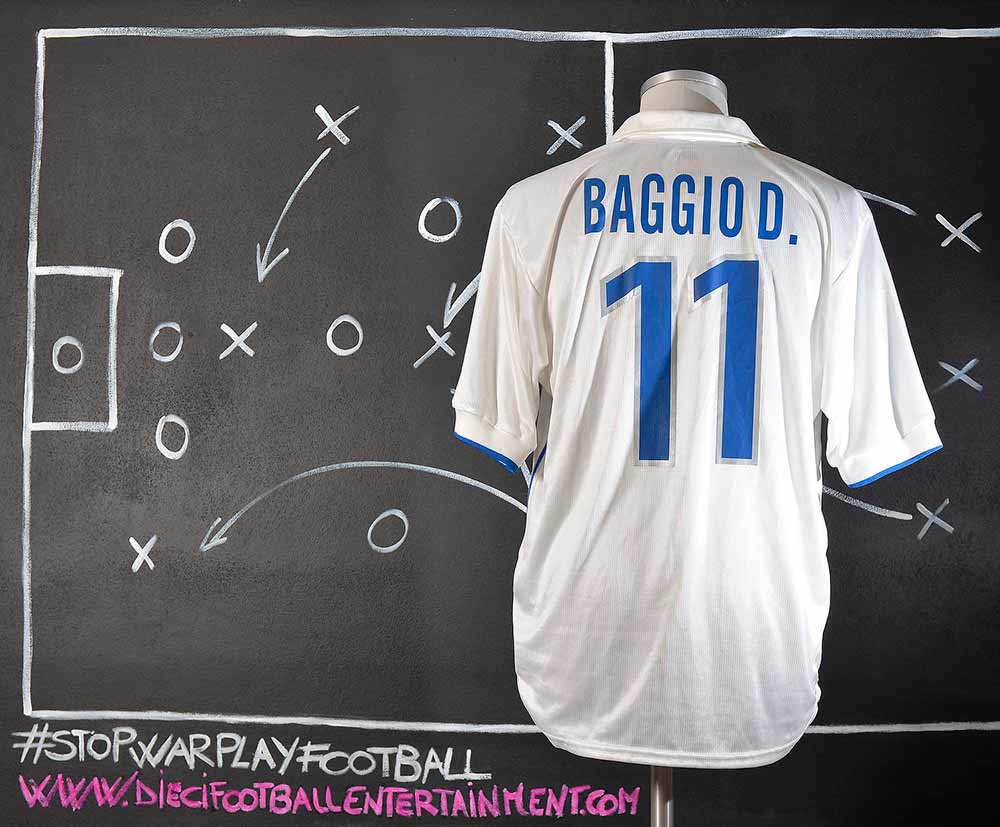 At youth international level, Baggio won the 1992 European U-21 Championship with the “Azzurrini”, and in the same year, he took part in the 1992 Summer Olympics in Barcelona with the Italian Under-23 side, under manager Cesare Maldini. Baggio made his international debut with the senior Italian squad under Arrigo Sacchi, on 21 December 1991, at the age of 20, in a 2–0 victory against Cyprus, in Foggia. He featured in the match along with fellow debutant Demetrio Albertini, who would play alongside Baggio in midfield with Italy for much of the 1990s. On 24 February, he scored his first goal for Italy, in Oporto, against Portugal. After representing Italy during their 1994 FIFA World Cup qualifying campaign, notably scoring the winning goal against Portugal, which allowed Italy to qualify for the tournament, Baggio was named a member of Italy’s 1994 World Cup squad under Arrigo Sacchi. In his first World Cup, he combined with his unrelated namesake Roberto Baggio. Together, they helped Italy to reach the 1994 World Cup final, scoring decisive goals, only to lose to Brazil on penalties. Dino scored two goals in the tournament: his first was a decisive match-winning header, assisted by Giuseppe Signori, in Italy’s first-round victory over Norway, and his second came from a strike from distance against Spain in the quarter-finals, assisted by Roberto Donadoni. Baggio would continue to play in other tournaments for Italy throughout the 1990s, such as Euro ’96, in which the Italians were eliminated in the first round. Baggio also played in every game for Italy at the 1998 World Cup under Cesare Maldini, which would prove to be his last major tournament with the Azzurri; Italy were eliminated on penalties once again by hosts and eventual champions France, after reaching the quarter-finals of the tournament. Baggio was initially in Dino Zoff’s provisional 26-man Italy squad for Euro 2000, before missing the final cut. He made his final appearance for Italy on 13 November 1999, in a 3–1 home defeat to Belgium in an international friendly match. In total, Baggio amassed 60 caps and scored 7 goals for the Italian national team between 1991 and 1999. He is remembered as a notable international player of the 90s by the Italian fans due to his World Cup performances, and as he was able to obtain a first-team midfield spot over many other talented players in their prime, such as Roberto Donadoni, Luigi di Biagio, Demetrio Albertini, Roberto Di Matteo, Nicola Berti, Alberigo Evani, Attilio Lombardo, Diego Fuser, Francesco Moriero, Sandro Cois, Stefano Fiore, Fernando De Napoli, Antonio Conte, Angelo Di Livio, Gianluca Pessotto, Carlo Ancelotti, Giancarlo Marocchi, Giuseppe Giannini, Giuseppe Signori, Roberto Baggio, Roberto Mancini, and Gianfranco Zola, among others.

Baggio was a well-rounded, hard-working, tenacious, and tactically versatile player, who was capable of playing in various midfield positions, and he was deployed as a central midfielder and as a box-to-box midfielder throughout his career, although his primary position was in a defensive midfield role, where he excelled at breaking down the opposition’s attacking plays; throughout his career, he was deployed in every position on the pitch. An aggressive and dynamic defensive midfielder, he was gifted with strength, tackling ability, pace, positional sense, and stamina, as well as solid technique, good vision, and reliable distribution, which also enabled him to aid his team creatively after winning back possession. Baggio was regarded as one of Italy’s best and most consistent midfielders during the 90s. Despite functioning primarily as a ball-winner who would then supply the ball to more creative midfielders, he was also able to contribute offensively and score goals due to his ability to make late attacking runs into the area, as well as his proficiency in the air and his accuracy with his head; he also had a penchant for scoring from powerful, accurate shots and volleys from distance. 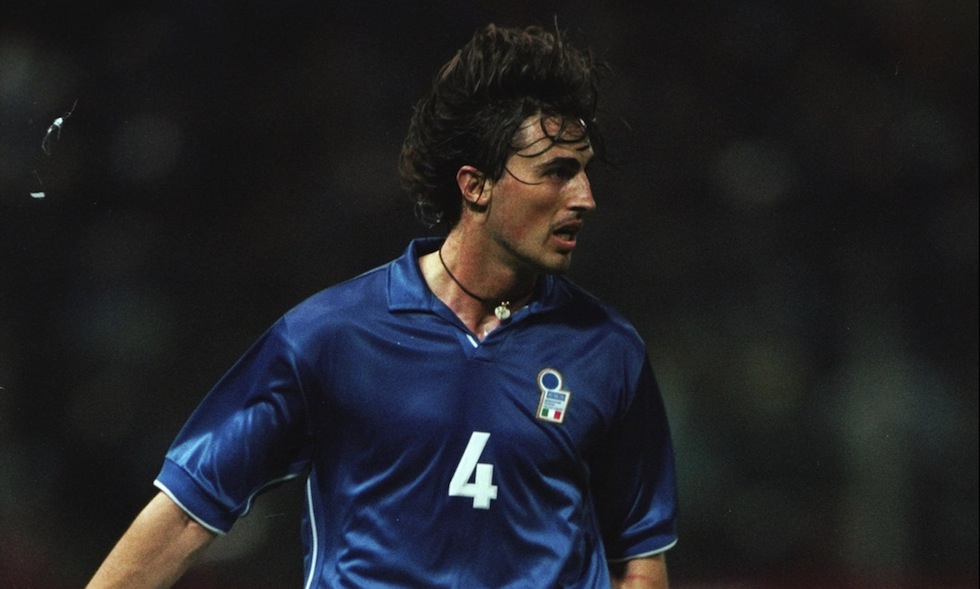 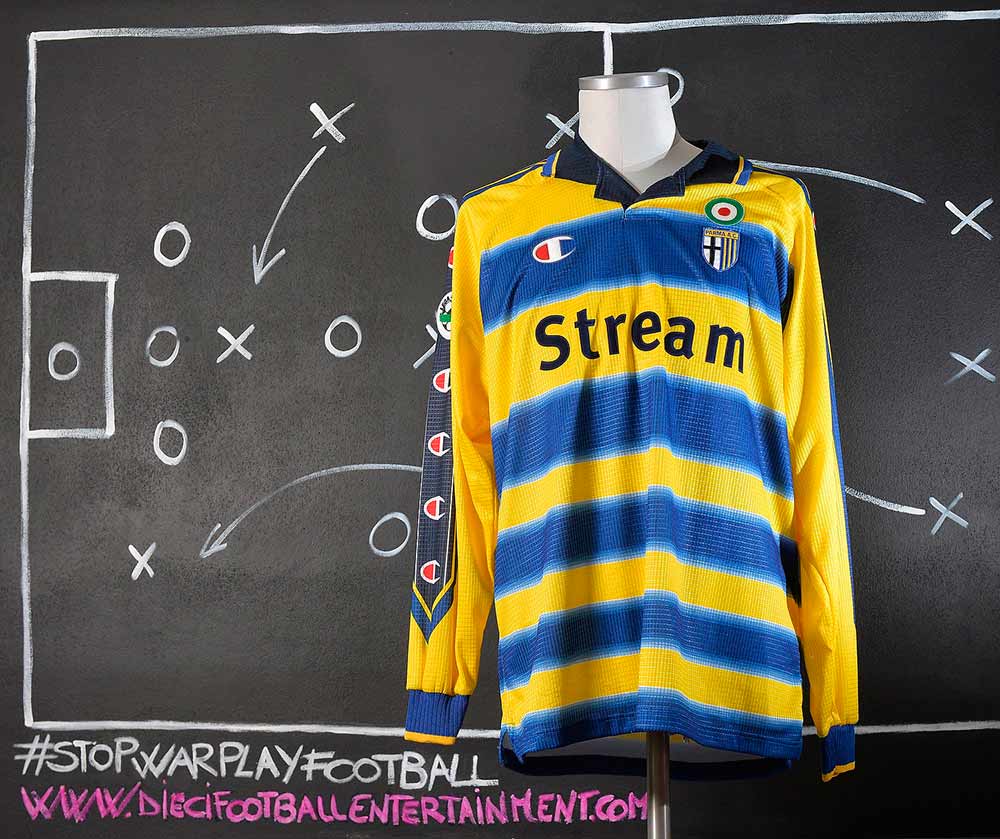 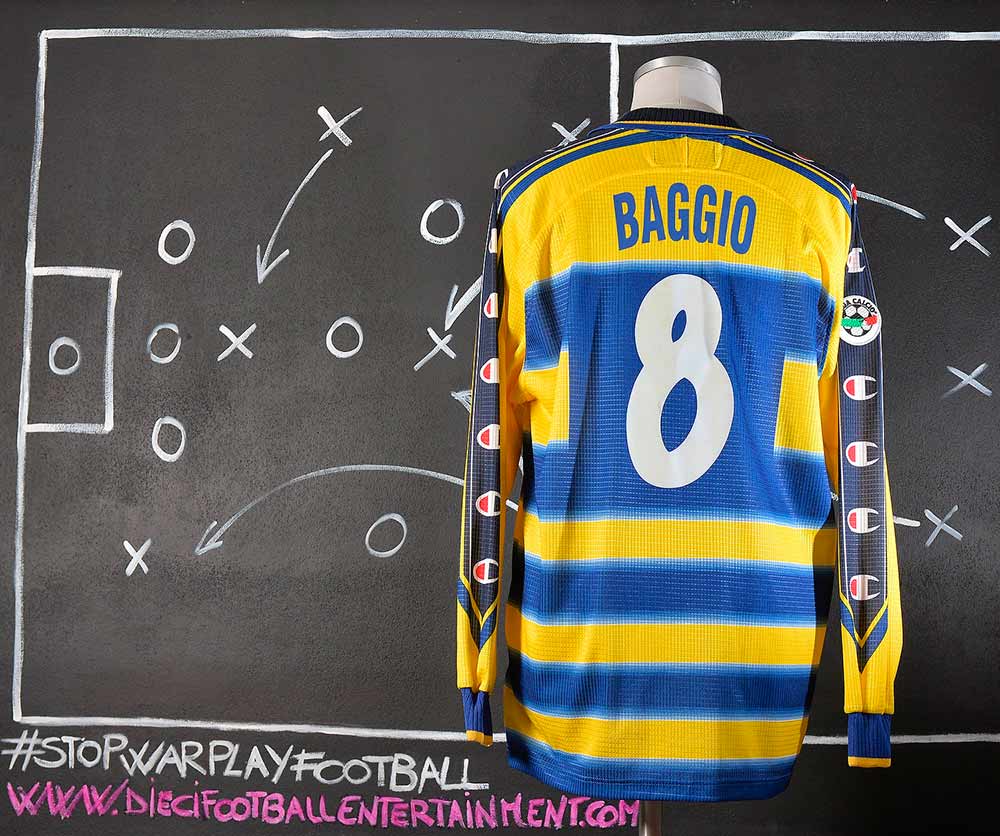 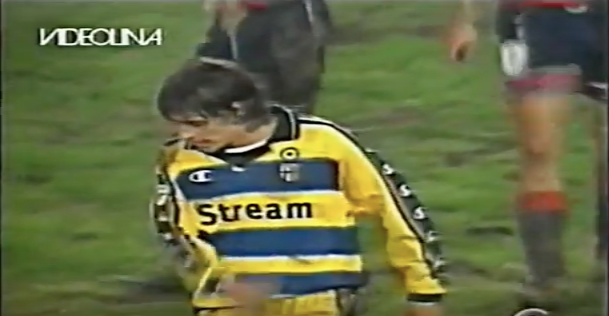 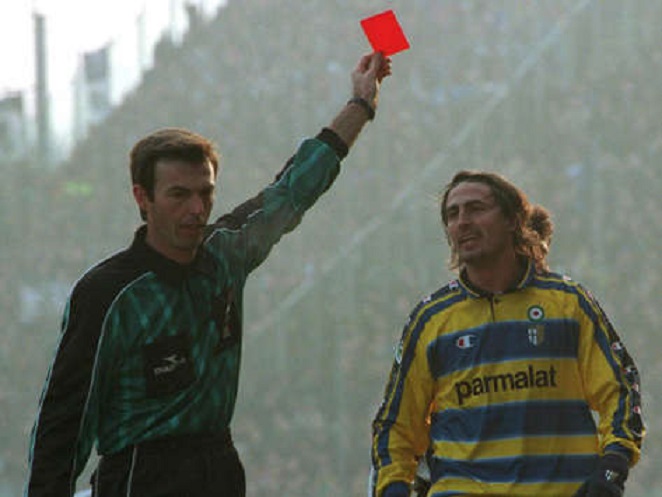 This kind of jersey with STREAM sponsor was used by the team only during the Tim Cup games. The regular Serie A sponsor of the season was Parmalat. STREAM was a pay per view cable tv that agreed with other Italian professional teams like Lazio S.S. and Roma A.S. for example, to be sponsor on their shirts for Tim Cup games only.

Baggio stayed with Parma until the end of the 1999–2000 season, helping the club to a fourth-place finish, and narrowly missing out on an UEFA Champions League spot following a play-off defeat to Inter. During his final season with the club, he also gained notoriety for a particular incident in a home match against his former club, Juventus, on the 9th January 2000. Baggio committed a foul on Gianluca Zambrotta, and was shown a controversial straight red card by referee Stefano Farina. In protest, Baggio made the “money sign” towards the referee, and subsequently spat on the ground close to Farina. Baggio was criticised for his behaviour, and was handed a two match ban, in addition to being fined 20 million lire, by his club, for the gesture. He was also prevented by Luciano Nizzola, the FIGC president at the time, from taking part in Italy’s friendly match against Sweden, on the 23rd February 2000.

Grosso Grosso2017-10-17T00:19:58+00:00
Page load link
This site uses cookie technology, including third parties' ones. If you want to know more click here. If you access any element of this site outside this banner, you consent to the use of cookies. Ok
Go to Top