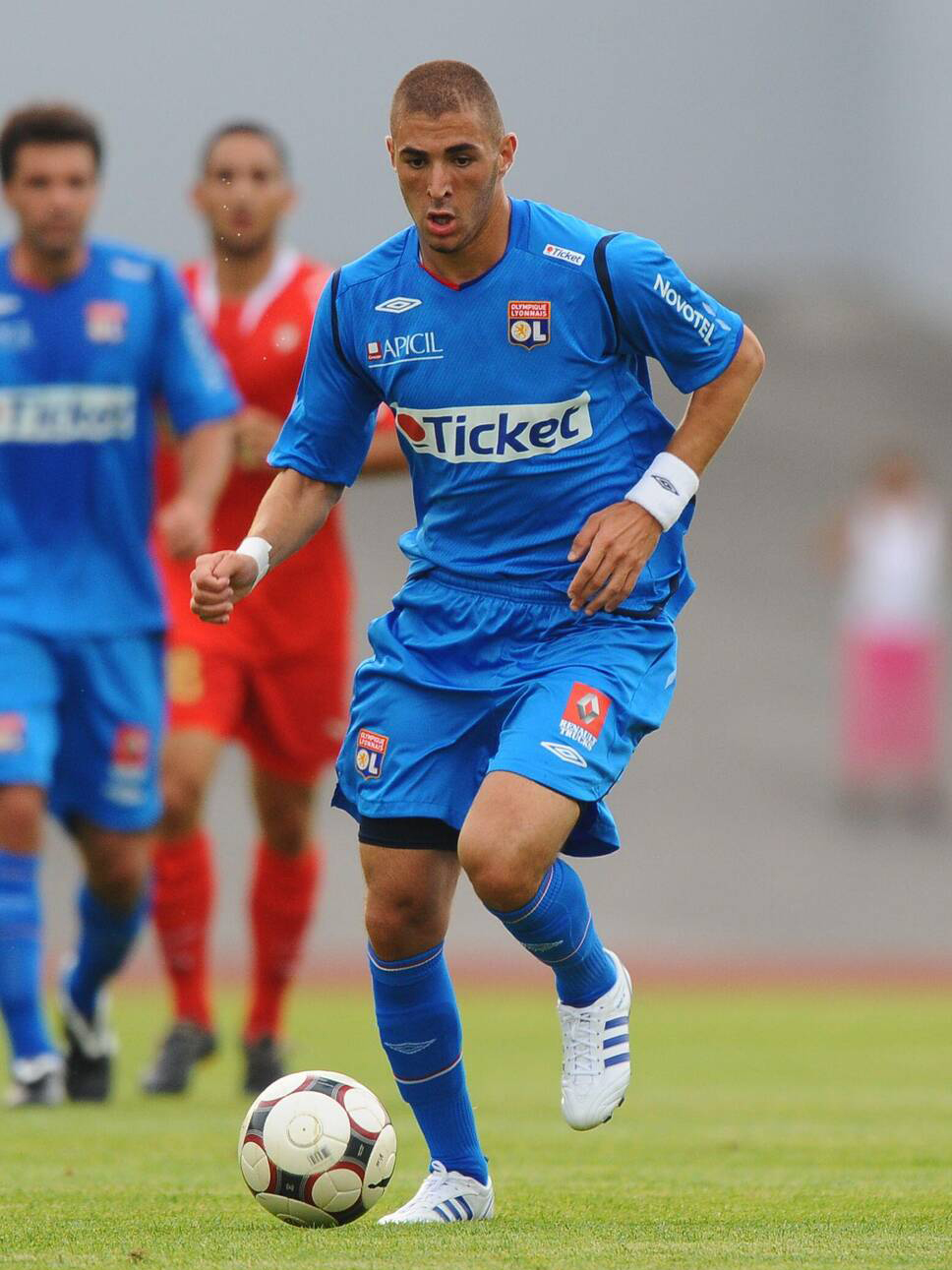 A skillful, quick, agile, and prolific forward, who is good in the air, Benzema has been described as an “immensely talented striker” who is “strong and powerful” and “a potent finisher from inside the box” with both feet, despite being naturally right footed. An atypical number 9, although he is usually deployed as a centre-forward, Benzema is also capable of playing in several other offensive positions, and has been used on the wing, or even behind the main striker. In addition to his goalscoring, Benzema is indeed known for his willingness and ability to drop into deeper or wider positions, and either link-up play with midfielders as a number 10, or use his strength and technical ability to hold up the ball to provide assists for teammates, courtesy of his vision, creativity, passing, and eye for the final ball. He has also been praised for his work-rate and tactical intelligence off the ball, as well as his attacking movement as a forward, which often draws opposition defenders out of position, and in turn creates spaces for Cristiano Ronaldo to make attacking runs into the centre of the area from the left wing. 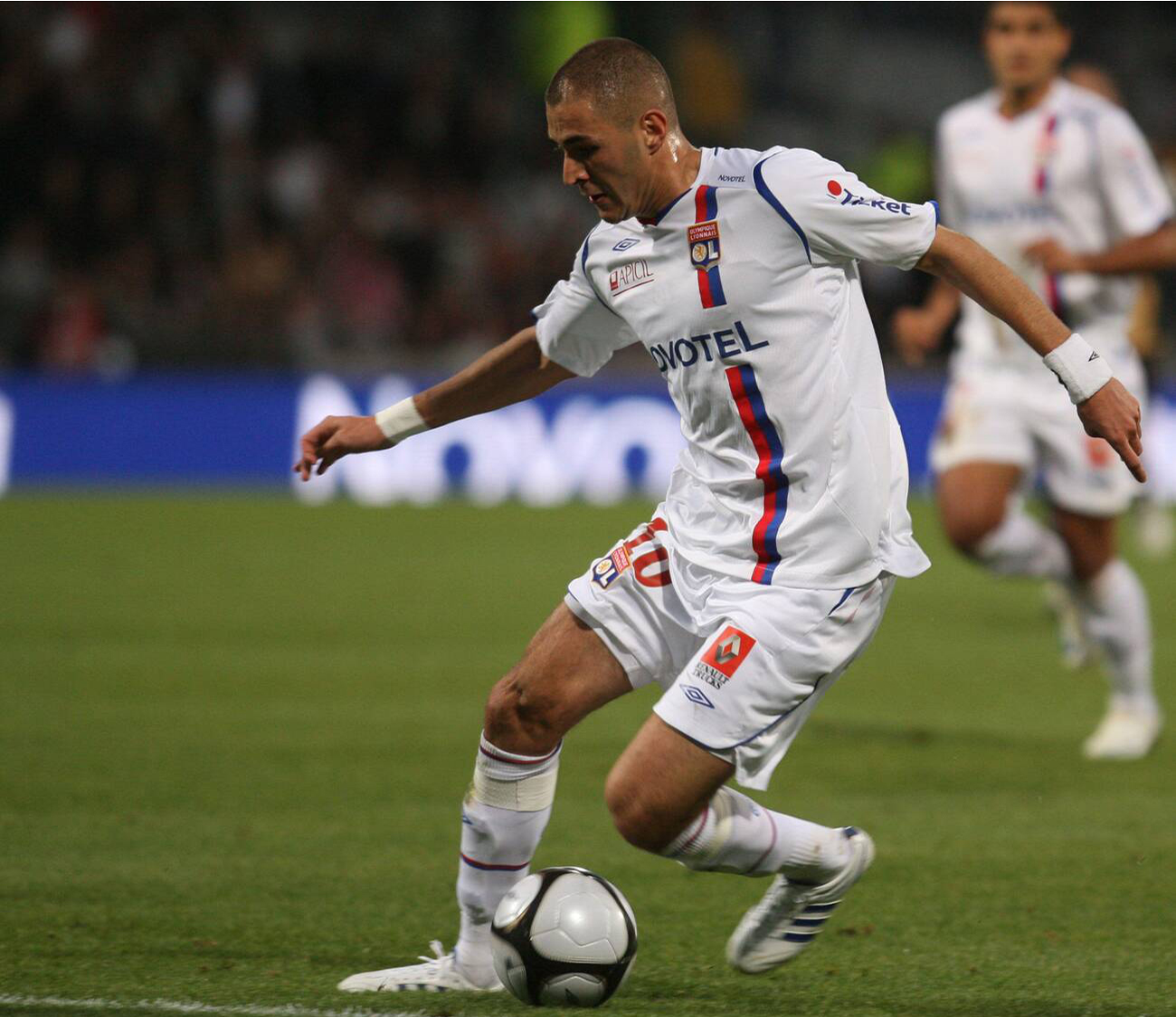 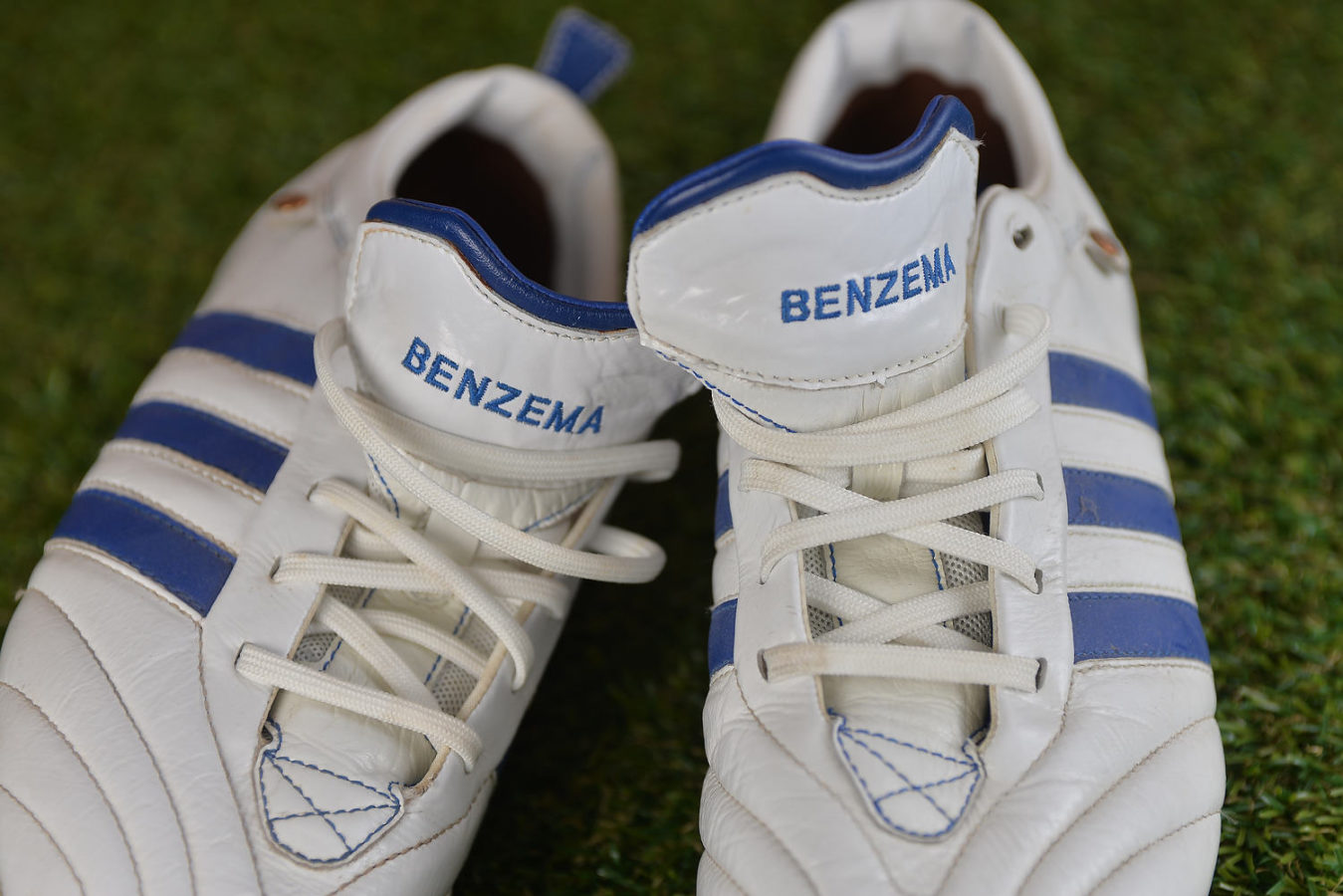 Karim Mostafa Benzema is a French professional footballer who plays for France national team as a striker. He has been described as an “immensely talented striker” who is “strong and powerful” and “a potent finisher from inside the box”. Benzema was born in the city of Lyon and began his football career with local club Bron Terraillon. In 1996, he joined the biggest club in the city, Olympique Lyonnais, and subsequently came through the club’s youth academy. Benzema made his professional debut in the 2004–05 season and appeared sporadically in his first three seasons as Lyon won three titles in that span. In the 2007–08 season, Benzema became a starter and had a breakthrough year scoring over 30 goals as Lyon won its seventh straight league title. For his performances, he was named the National Union of Professional Footballers (UNFP) Ligue 1 Player of the Year and named to the organization’s Team of the Year. Benzema was also the league’s top scorer and given the Bravo Award by Italian magazine Guerin Sportivo. After another season at Lyon, in July 2009, Benzema moved to Real Madrid in a transfer fee worth over €35 million ($50 million), and signed a six-year contract. After struggling to establish himself in his debut season with the club, in the ensuing two seasons, Benzema reached prominence, scoring 32 goals en route to helping Real Madrid win the Copa del Rey in 2011 and the 2011–12 edition of La Liga. He has been named French Player of the Year three times for his performances in 2011, 2012 and 2014. Benzema is a former French youth international and has represented his nation from under-17 level onwards. Prior to playing for the senior team, he played on the under-17 team that won the 2004 UEFA European Under-17 Championship. Benzema made his senior international debut in March 2007 in a friendly match against Austria, scoring in a 1–0 win. Benzema has earned over 80 caps and represented France at three major international tournaments: the 2008 and 2012 editions of the UEFA European Football Championship and the 2014 FIFA World Cup. However, Benzema has twice been intentionally left off major tournament squads (2010 World Cup and Euro 2016) due to various scandals. 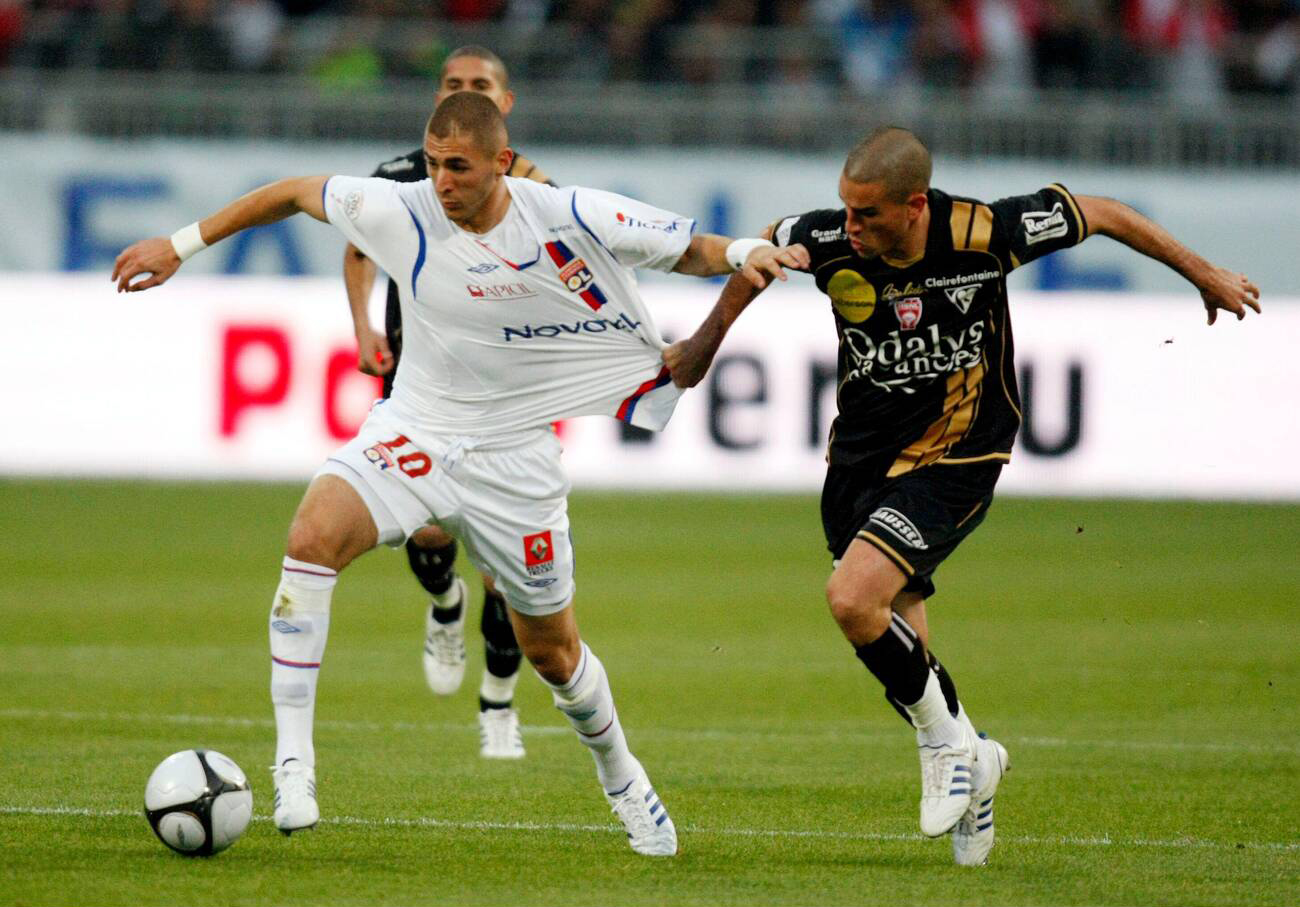 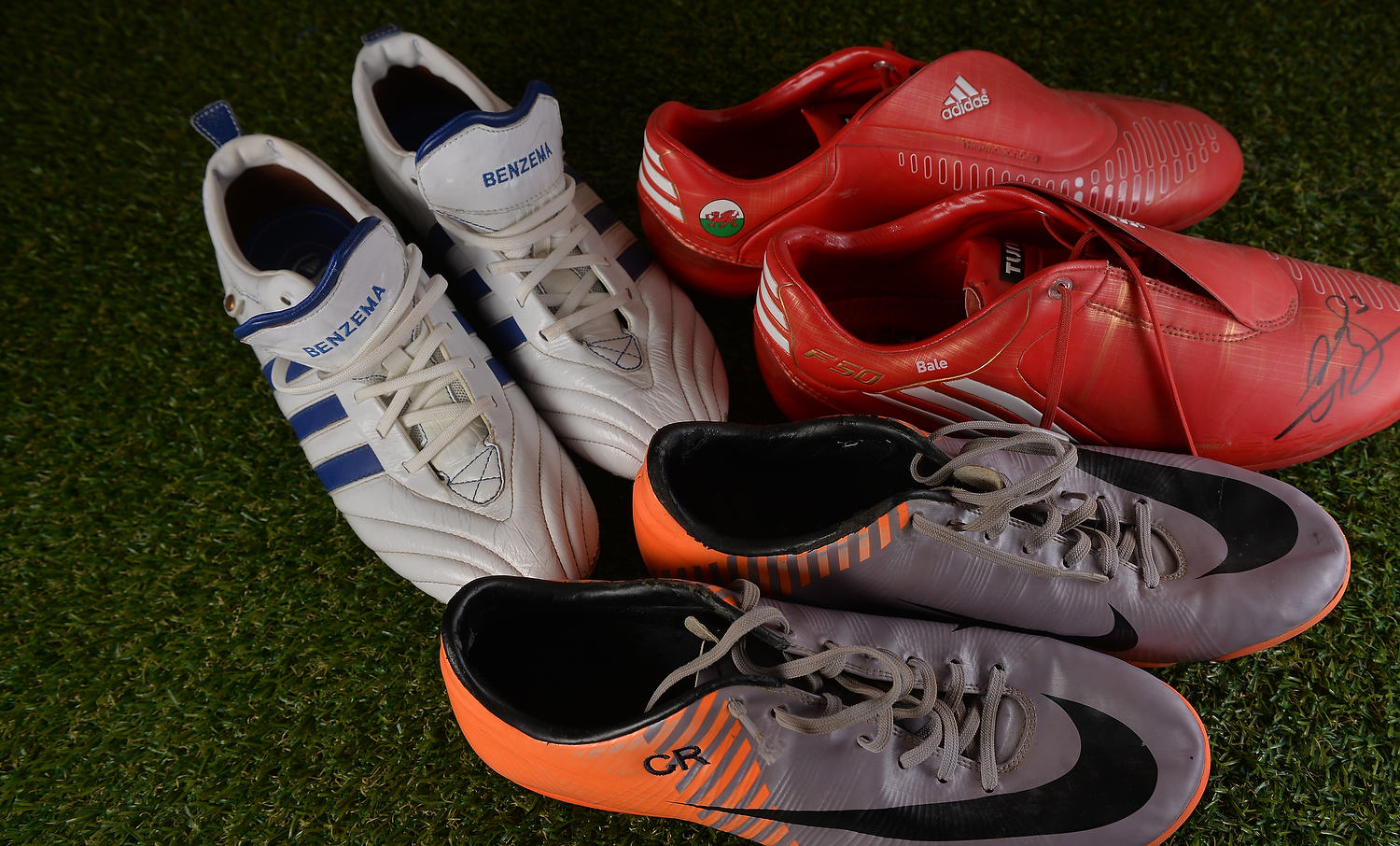 On 1 July 2009, it was announced that Lyon had reached an agreement with Spanish club Real Madrid for the transfer of Benzema. The transfer fee was priced at €35 million with the fee rising to as much as €41 million based on incentives. On 9 July, Benzema successfully passed his medical and signed his contract, a six-year deal, later that afternoon. He was presented officially as a Real Madrid player later that night at the Santiago Bernabéu Stadium, similarly to the previous signings of Kaká and Cristiano Ronaldo. Real Madrid’s attacking trio of Bale, Benzema and Cristiano, dubbed “BBC”, finished the season with 97 goals. 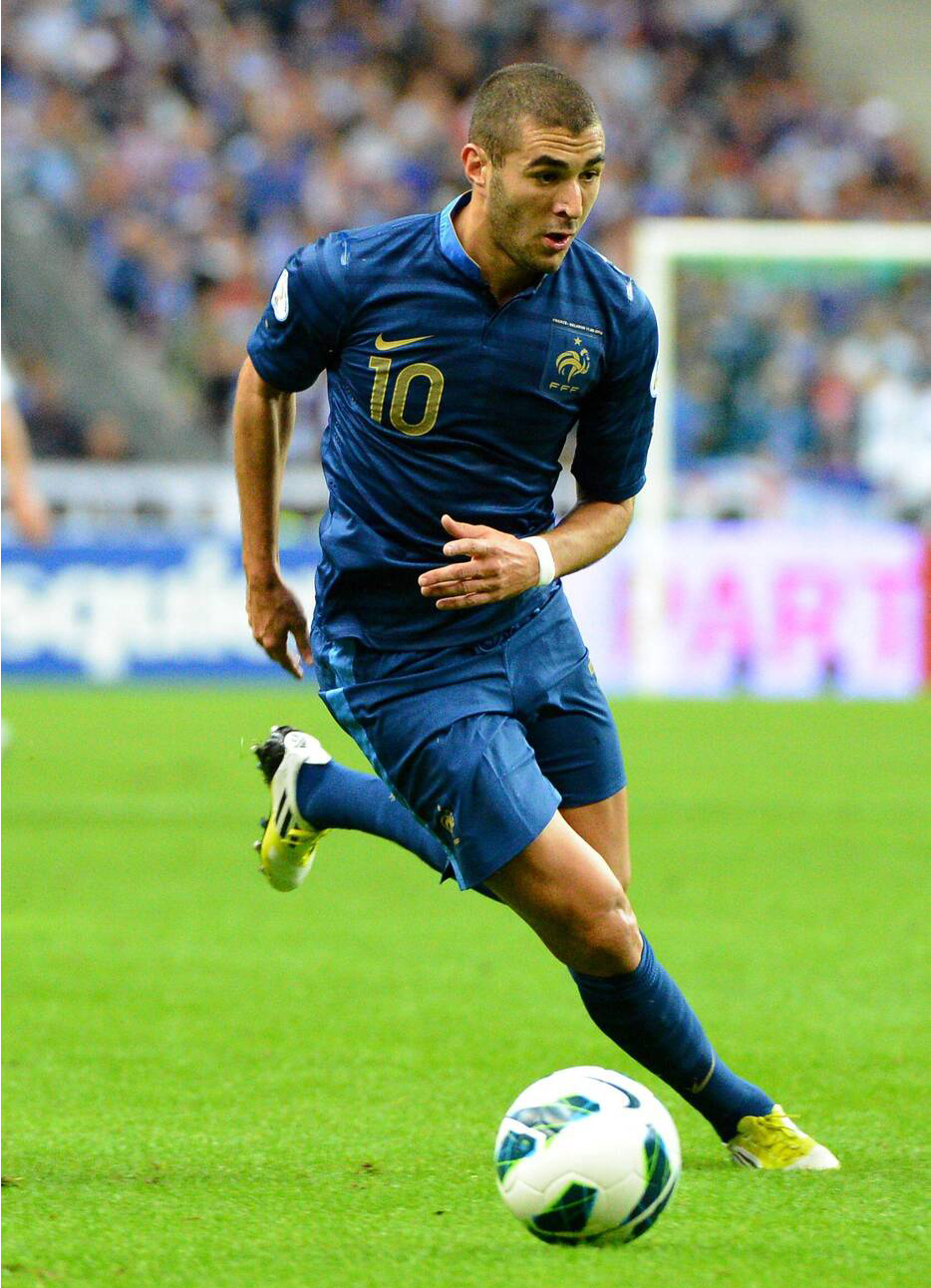 These boots were issued for Karim Benzema for the Fifa World Cup “Brazil 2014″Qualifying game between France and Belarus which took place in Saint-Denis, “Stade of France”, on September 11th 2012. These boots have match details on side which is pretty uncommon. Indeed while it’s very easy to see match details on shirts, it is not really common to see them on boots. Benzema was called up for the first time to the senior national team by Raymond Domenech on 9 November 2006 for the team’s friendly match against Greece that would be played on 15 November. Benzema described the call-up as “a reward”, while also stating “I am pleased, of course, me and my family. A (the senior national team), is the national team’s highest honor”. Two days before the match, he was forced to withdraw from the team due to a thigh injury, which he suffered while playing domestically for Lyon. After failing to make the squad for the team’s February 2007 match against Argentina, Benzema returned to the team in March for a UEFA Euro 2008 qualifying match against Lithuania and a friendly against Austria. After failing to appear in the qualifier, he made his international debut on 28 March 2007 against Austria. Benzema appeared as a half-time substitute for Djibril Cissé and scored the only goal of the match after a free-kick from Samir Nasri. On 13 October, Benzema scored a double in a 6–0 win against the Faroe Islands.[263] After appearing regularly in the team for the rest of the 2007–08 season, he was named to the 23-man squad to participate in UEFA Euro 2008. 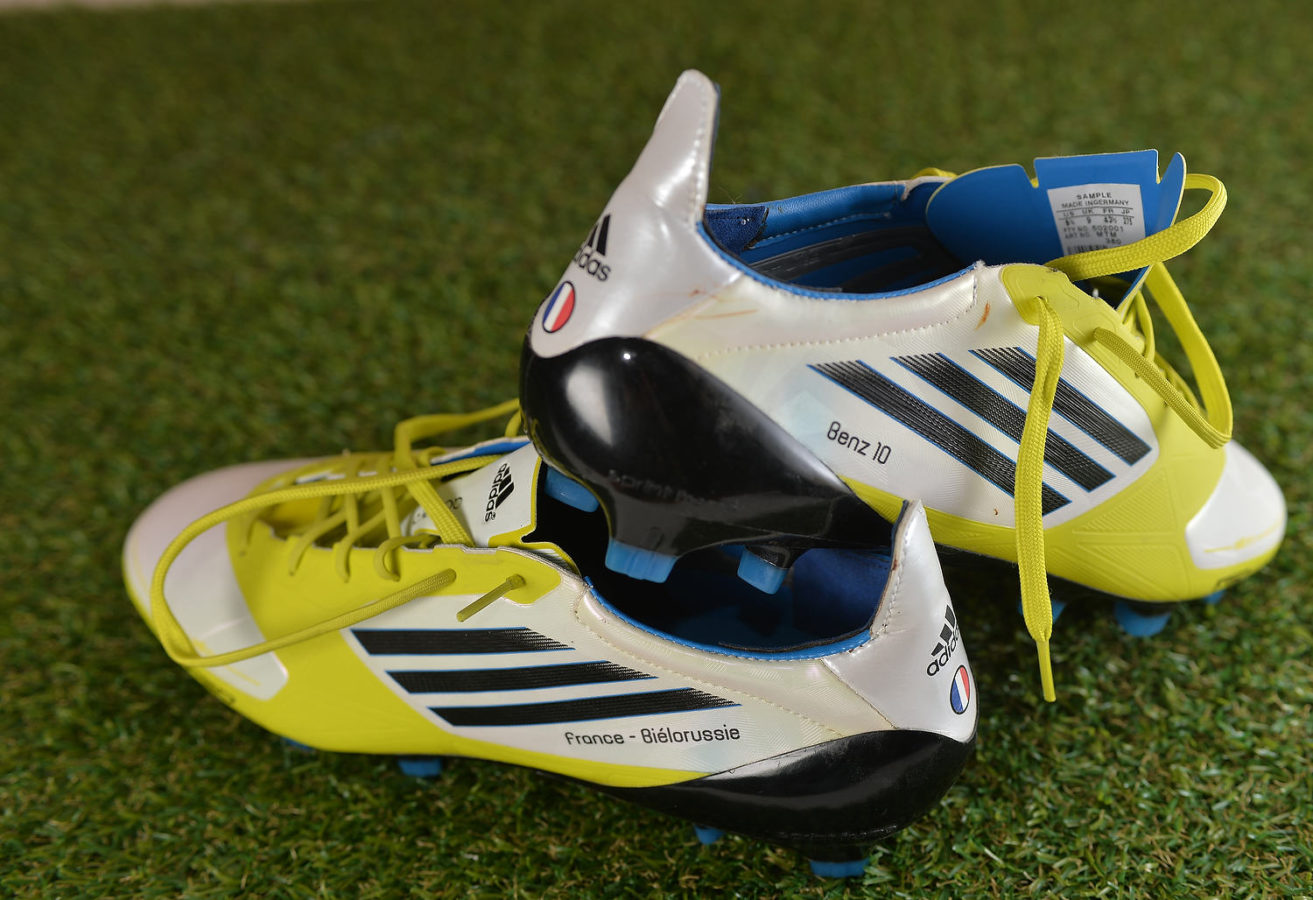 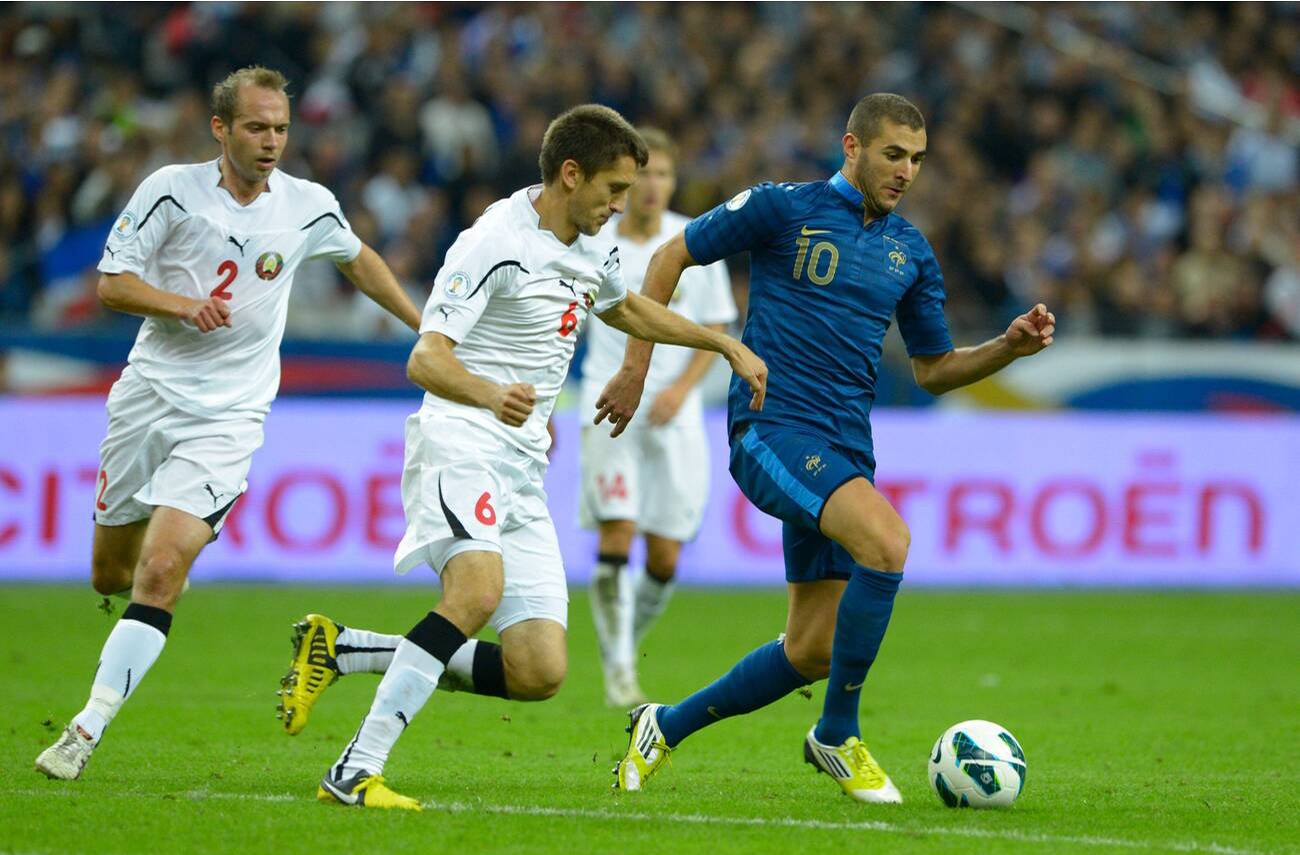 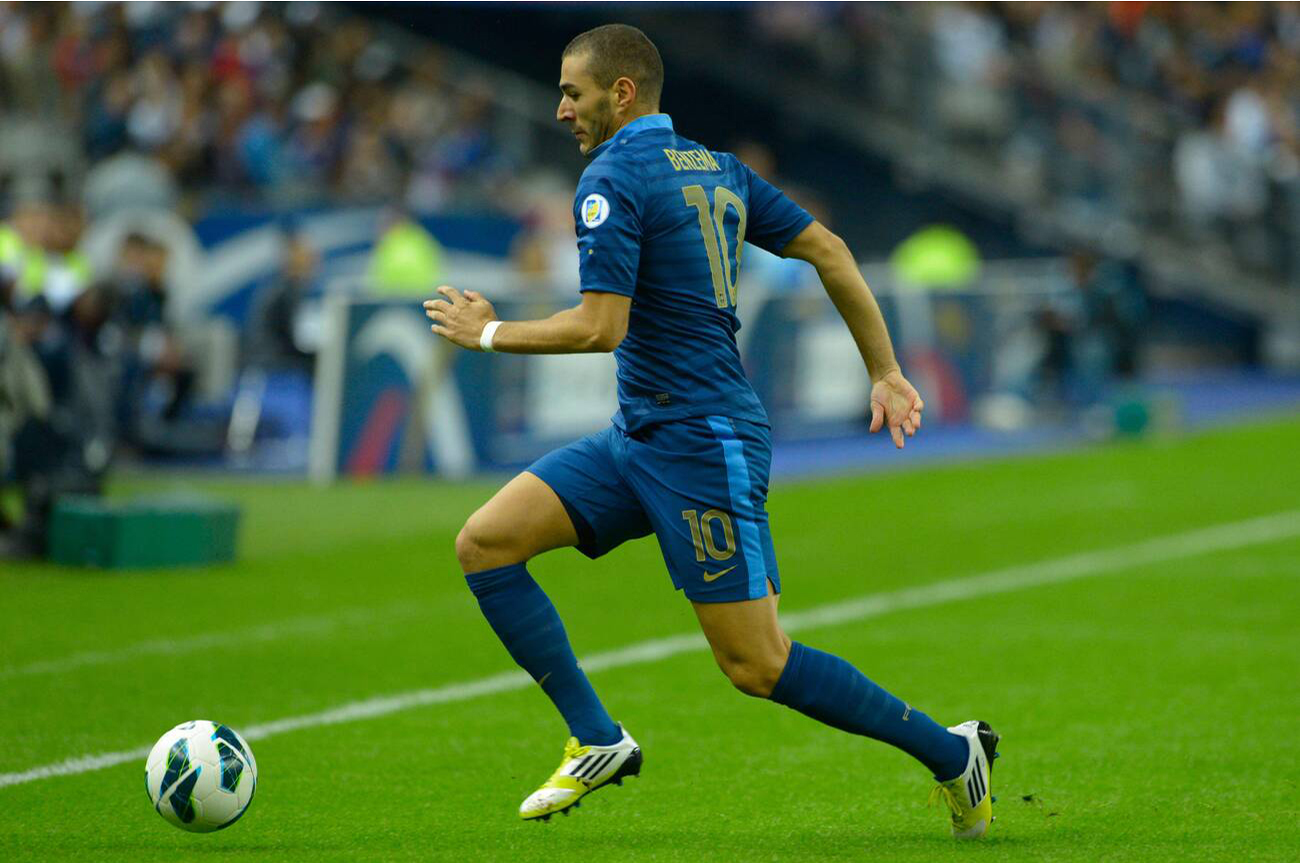 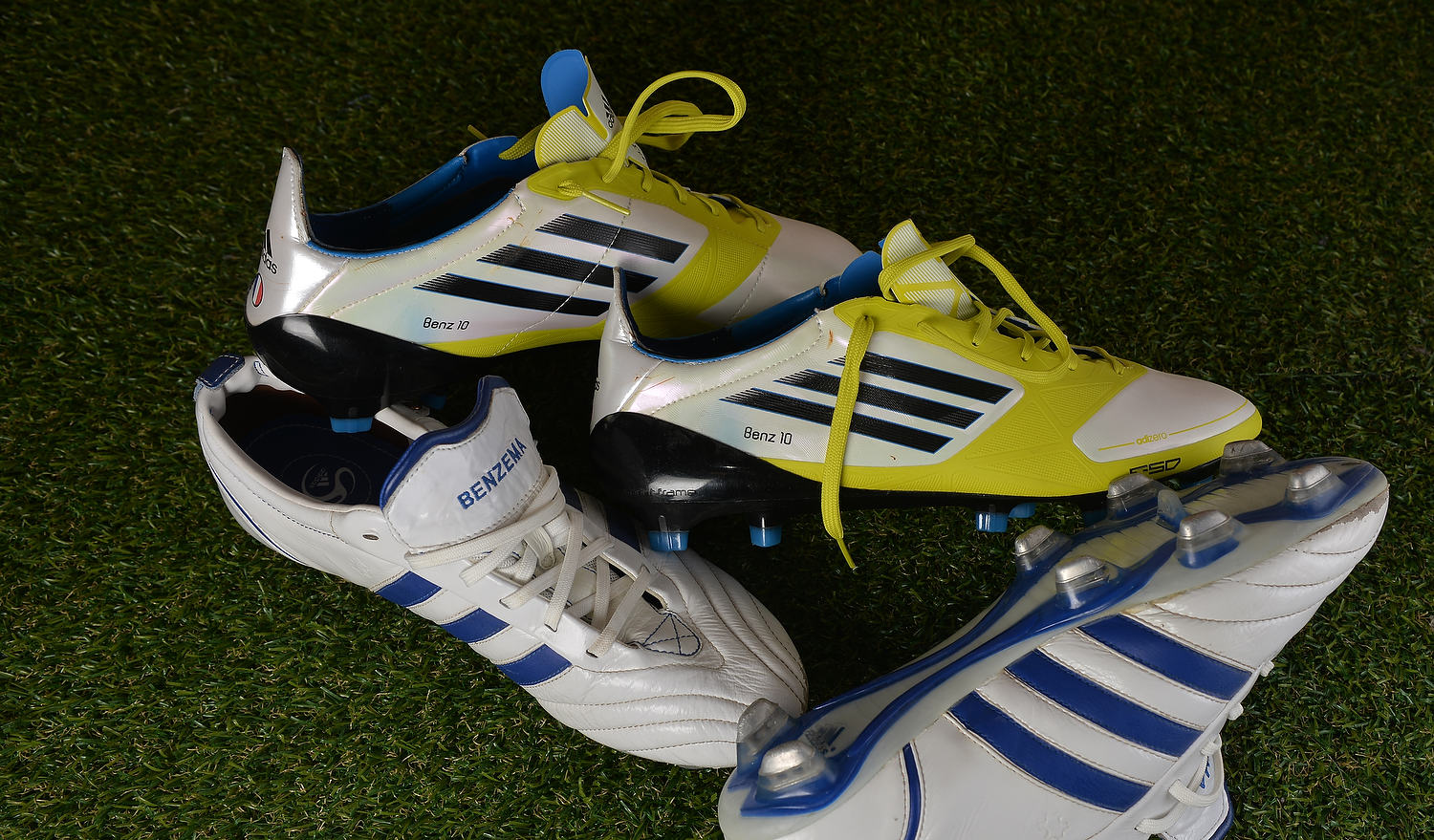 Grosso Grosso2022-10-19T03:37:42+00:00
Page load link
This site uses cookie technology, including third parties' ones. If you want to know more click here. If you access any element of this site outside this banner, you consent to the use of cookies. Ok
Go to Top