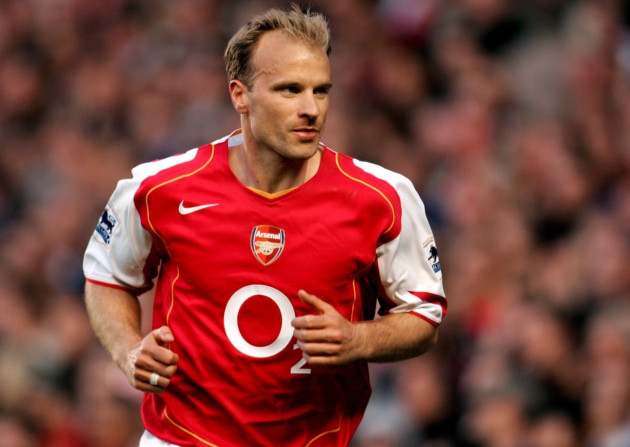 Dennis Nicolaas Maria Bergkamp is a former Dutch professional footballer. Originally a wide midfielder, Bergkamp was moved to main striker and then to second striker, where he remained throughout his playing career. Bergkamp has been described by Jan Mulder as having “the finest technique” of any Dutch international and a “dream for a striker” by teammate Thierry Henry. The son of an electrician, Bergkamp was born in Amsterdam and played as an amateur in the lower leagues. He was spotted by Ajax at age 11 and made his professional debut in 1986. Good form led to an international call-up a year later, attracting the attention of several European clubs. Bergkamp signed for Italian club Internazionale in 1993, where he had two disappointing seasons. After joining Arsenal in 1995, he rejuvenated his career, helping the club to win three Premier League titles, four FA Cup trophies, and reach the 2006 UEFA Champions League Final, which marked his last appearance as a player. With the Netherlands national team, Bergkamp surpassed Faas Wilkes’s record to become the country’s top goalscorer of all time in 1998, a record later eclipsed by Patrick Kluivert, Robin van Persie and Klaas-Jan Huntelaar. Widely regarded as one of the greatest players in his generation, Bergkamp finished third twice in the FIFA World Player of the Year award and was selected by Pelé as one of the FIFA 100 greatest living players. In 2007, he was inducted into the English Football Hall of Fame, the first and so far only Dutch player ever to receive such honour. 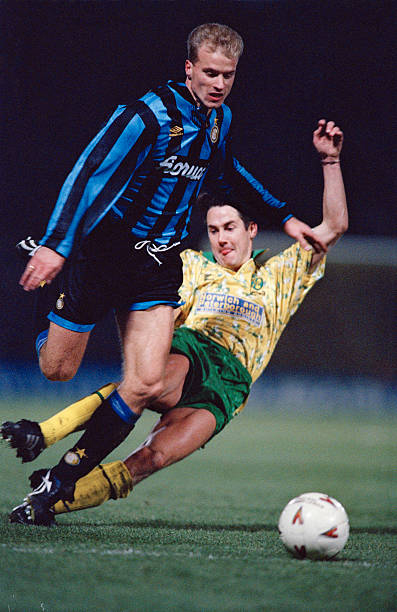 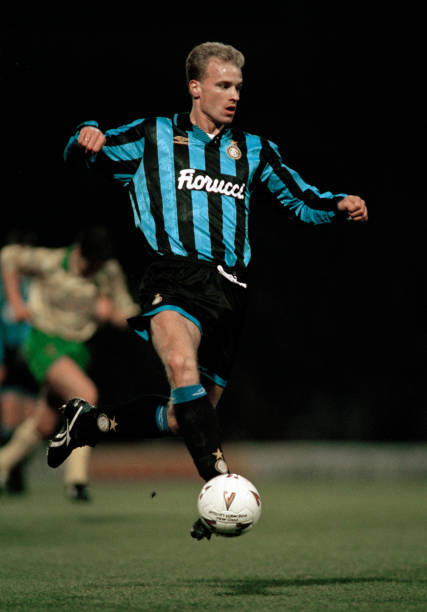 This shirt was worn by Dennis Bergkamp during the Italy Cup’s game between Lucchese and Internazionale which took place in Lucca, “Porta Elisa” Stadium, on November 10th 1993. Lucchese defeated Internazionale 2-1 but Internazionale passed to the following round. The shirt was swapped after the game with a Lucchese’s defender who we got it from. 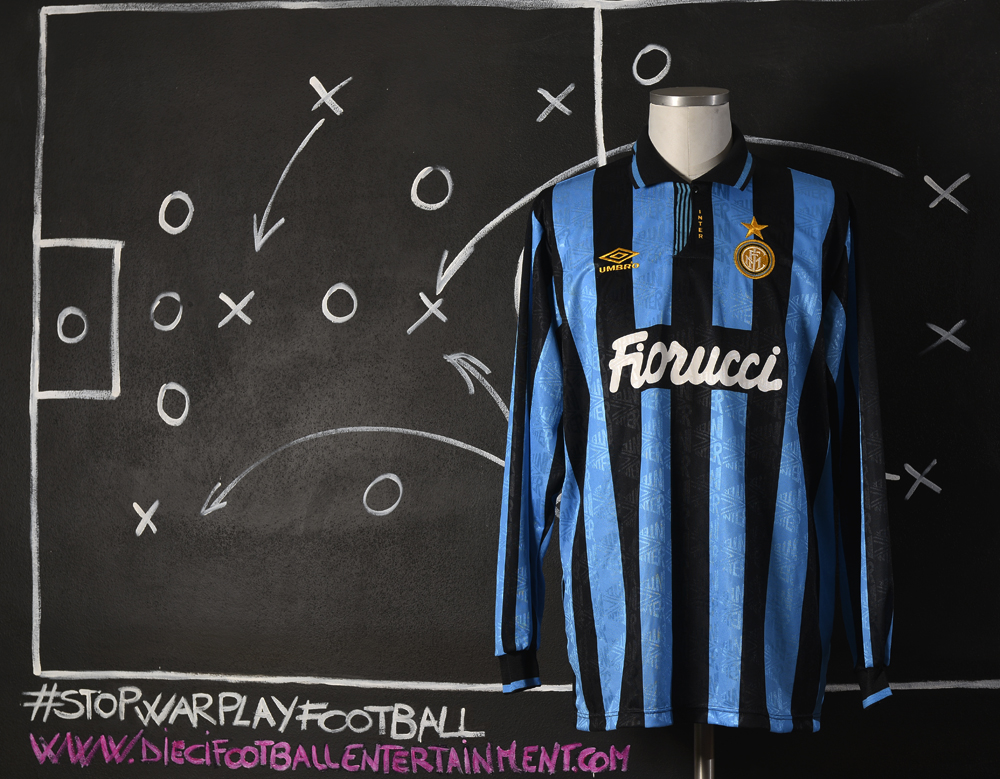 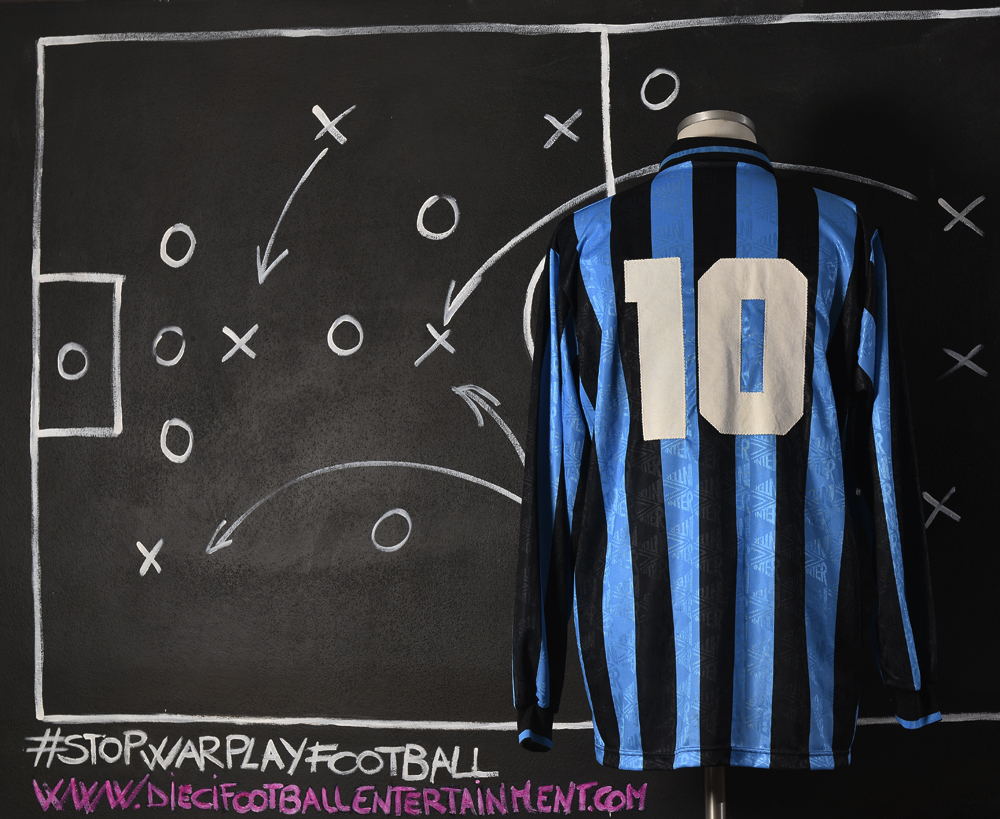 Bergkamp attracted the attention of several European clubs as a result of his performances for Ajax. Johan Cruyff advised him not to join Real Madrid, one of the teams said to have been interested in him. But Bergkamp was insistent on playing in Italy. He considered Serie A “the biggest league at the time” and preferred a move to either Juventus or Inter Milan. On 16 February 1993, Bergkamp agreed a £7.1 million move to the latter club in a deal which included his Ajax teammate Wim Jonk. Upon signing, Bergkamp said Inter “met all my demands. The most important thing for me was the stadium, the people at the club and their style of play.” Bergkamp made his debut against Reggiana on 29 August 1993 at the San Siro in a 2–1 victory. He scored his first goal for the club against Cremonese in September 1993 but had a difficult time against the highly organised and resolute Italian defences, scoring a further seven goals in the league. This was partly due to manager Osvaldo Bagnoli’s inability to find a stable forward partnership, preferring Bergkamp in a three with Rubén Sosa and Salvatore Schillaci. Inter’s poor league form culminated in the sacking of Bagnoli in February 1994 and his replacement by Gianpiero Marini, a member of Italy’s 1982 FIFA World Cup-winning squad. The club finished 13th in Serie A, one point away from relegation, but enjoyed success in the UEFA Cup, beating Austria Salzburg in the final over two legs. Bergkamp was the competition’s joint top goalscorer with eight goals and scored a hat-trick against Rapid București in the first round. In Bergkamp’s second season at Inter, the club changed managers again, appointing Ottavio Bianchi. Bergkamp endured a disappointing campaign, troubled with stress injuries and fatigue from the 1994 World Cup. He managed to score 5 goals in 26 appearances. Off the field, Bergkamp’s relationship with the Italian press and fans became uncomfortable. His shy persona and his propensity to go home after matches was interpreted as apathy. Because of his poor performance on the pitch, one Italian publication renamed their award given to the worst performance of the week, L’asino della settimana (Donkey of the Week) to Bergkamp della settimana. Inter ended the league season in sixth position and failed to retain the UEFA Cup, with the club eliminated in the second round. In February 1995, the club was purchased by Italian businessman and fan Massimo Moratti, who promised to invest heavily in the squad. Bergkamp’s future in the first team was uncertain following the signing of Maurizio Ganz a month after the takeover. 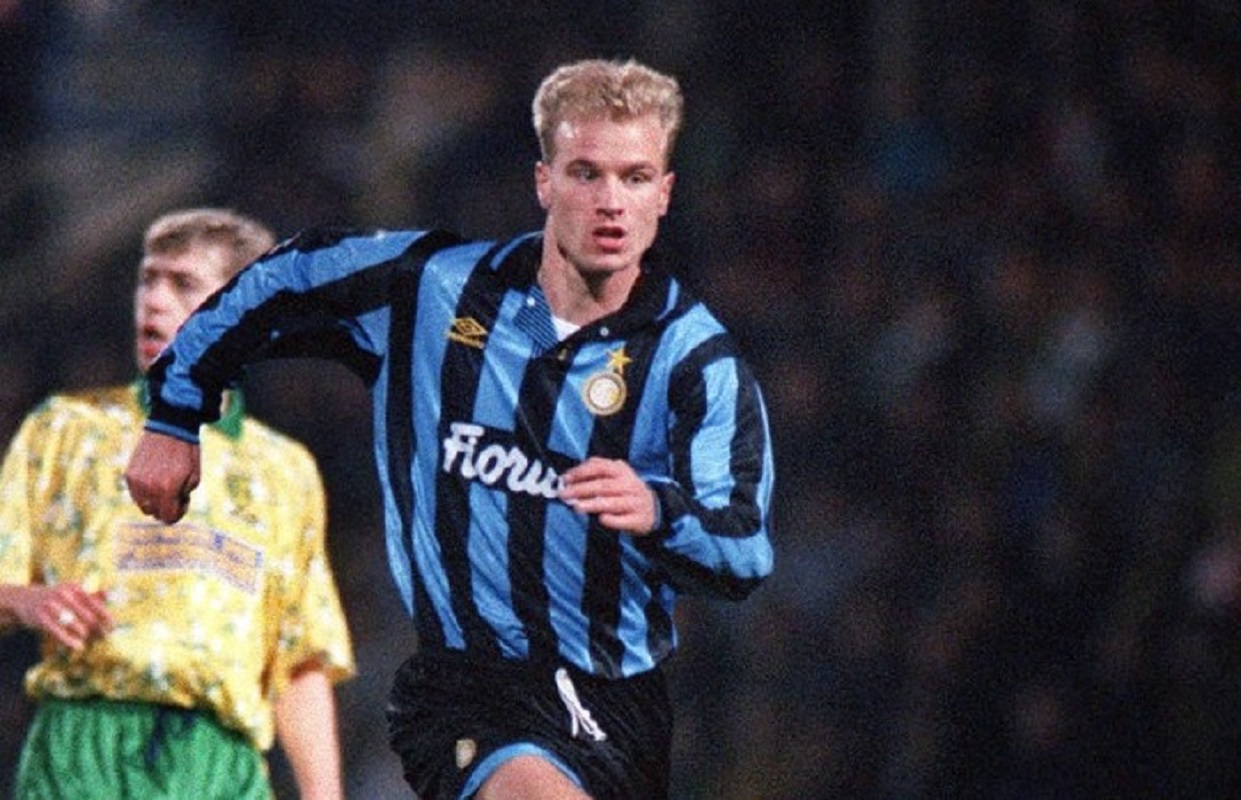 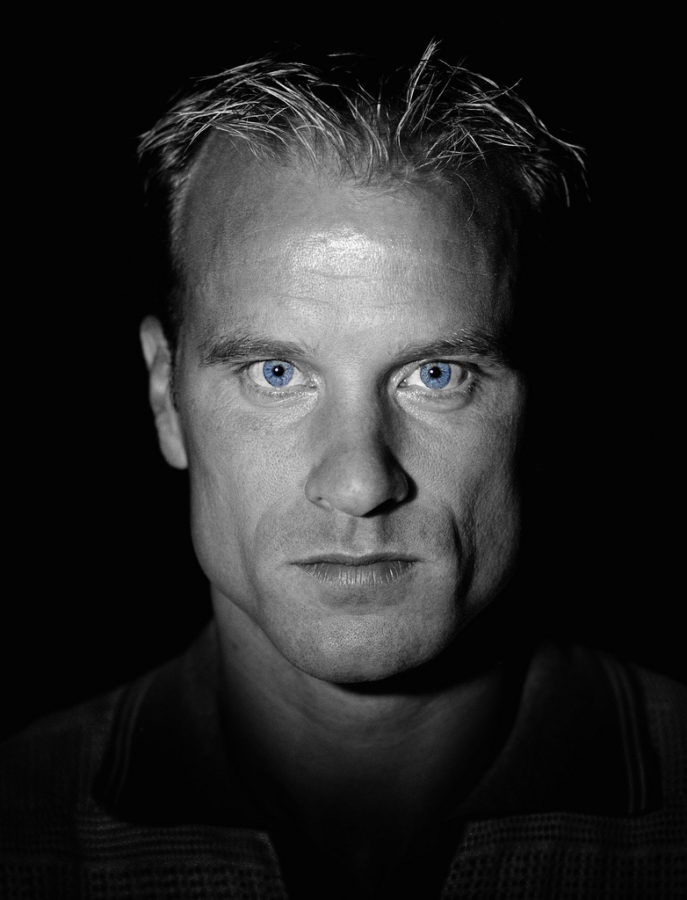 Bergkamp was schooled in Total Football, a playing style and philosophy which relied on versatility. This was primarily to maximise the footballer’s potential; players tried out every outfield position before finding one that suited them best.Every age group at Ajax played in the same style and formation as the first team – 3–4–3 – to allow individuals to slot in without effort when moving up the pyramid. Bergkamp “played in every position apart from goalie” and believed he benefited from the experience of playing as a defender, as it helped him “know how they think and how to beat them”. When he made his debut as a substitute against Roda JC, Bergkamp was positioned on the right wing, where he remained for three years. During his time at Inter Milan, Bergkamp was switched to the position of a main striker, but failed to cooperate with his offensive partner Ruben Sosa, whom he later called “selfish”. Furthermore, due to his introverted character, he was accused of lacking consistency and leadership skills by the Italian press, and struggled to replicate his previous form during his time with Inter. When Bergkamp joined Arsenal in 1995, he enjoyed a successful strike partnership with Wright, and in later seasons Anelka and Henry, playing in his preferred position as a creative second striker. The arrival of Overmars in the 1997–98 season enhanced Bergkamp’s play, as he was getting more of the ball. Between August and October 1997, he scored seven goals in seven league matches. A similar rapport developed between him and Ljungberg during the 2001–02 season. Although he was known for his composure and ability to score several goals for his team as a forward, Bergkamp was also capable of playing behind a lone striker, where he essentially functioned in the number 10 role as a playmaking attacking midfielder or deep-lying forward, due to his ball skills and creative ability, which enabled him to drop deep between the lines and link-up play. A quick, elegant, intelligent, and technically gifted player, his excellent first touch, quick feet, dribbling ability, and change of pace enabled him to beat defenders in one on one situations, while his attacking movement, physique, balance, and close control allowed him to hold up the ball and create space for teammates; his vision and passing range with both feet, despite being naturally right-footed, subsequently allowed him to provide assists for on-running strikers. Bergkamp often stated that he preferred playing in this deeper role, as he derived more pleasure from assisting goals, rather than scoring them himself. Throughout his playing career Bergkamp was accused of diving, and was referred to as a “cheat” and “dirty player” for retaliating against players who had previously challenged him, something his former manager Wenger denied. In an interview with The Times in 2004, he said that while he was at Inter Milan, he realised the importance of being mentally tough in order to survive: “A lot of people there try to hurt you, not just physically but mentally as well, and coming from the easygoing culture in Holland, I had to adopt a tougher approach. There, it was a case of two strikers up against four or five hard defenders who would stop at nothing.” Bergkamp says his aggression often stems from frustration. 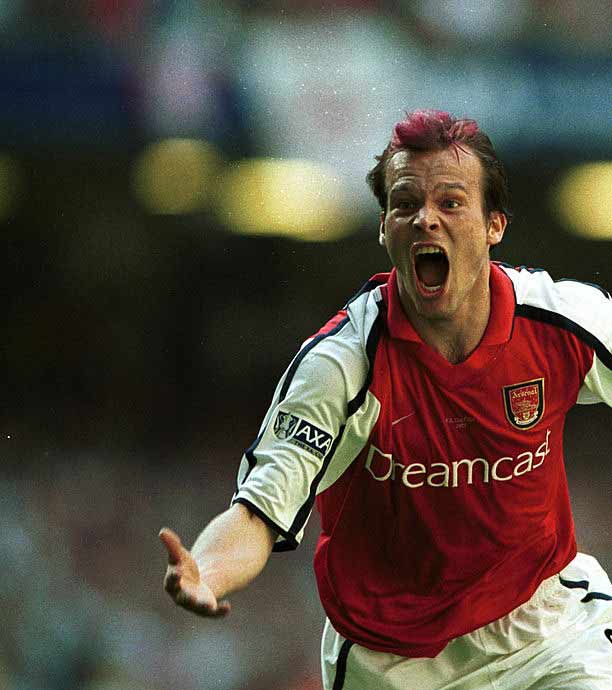 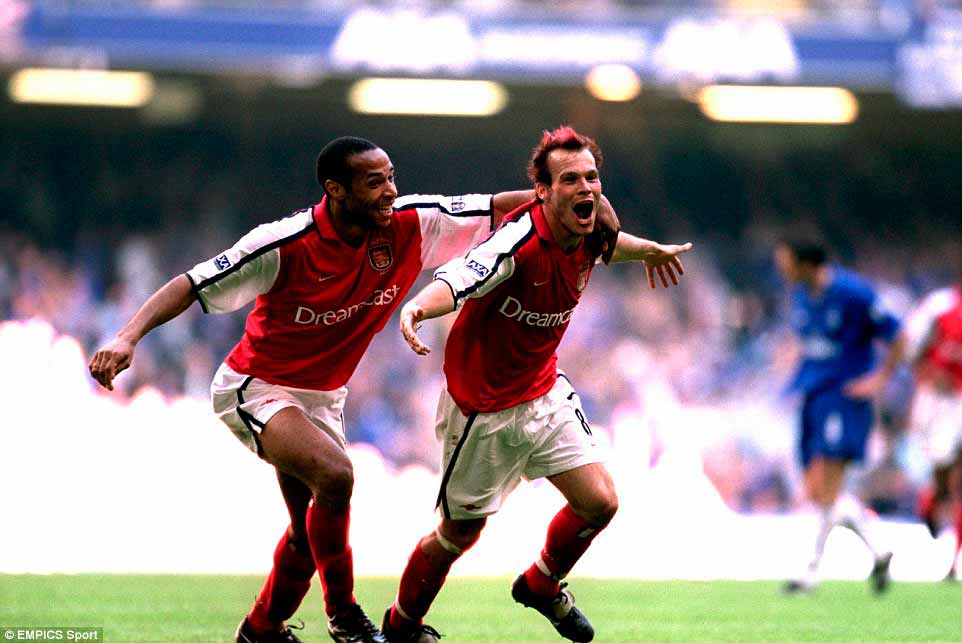 Watch above the F.A. Cup 2001 Highlights 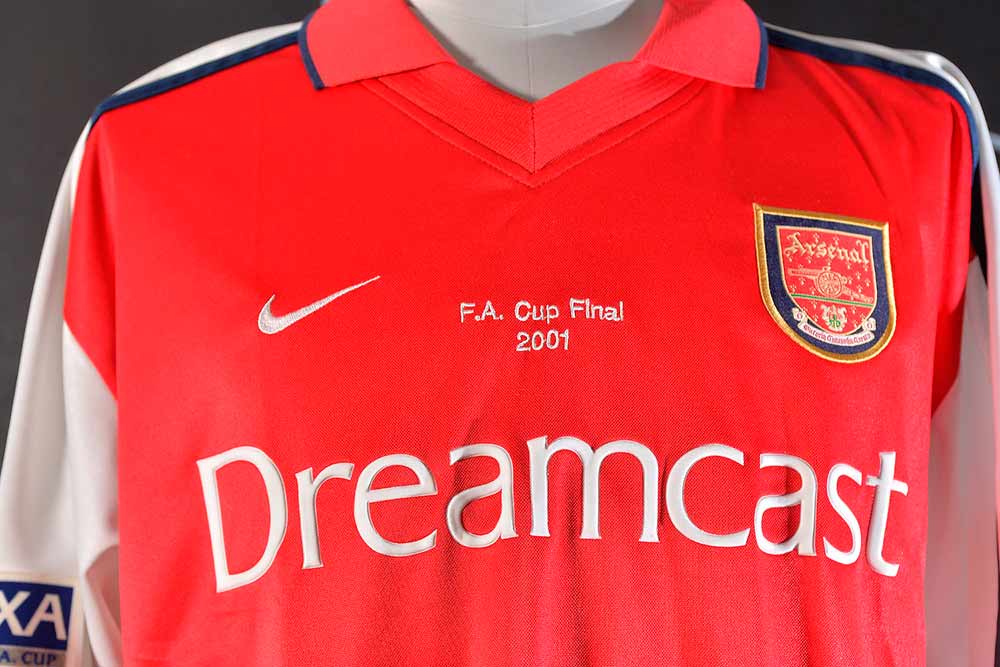 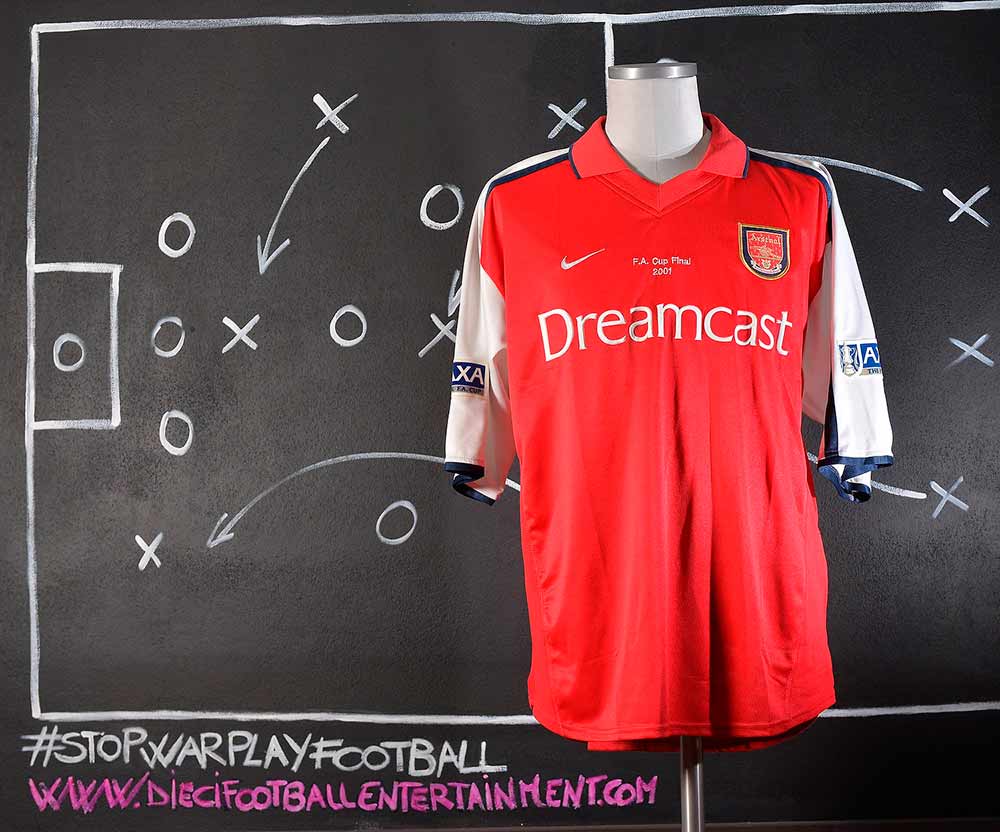 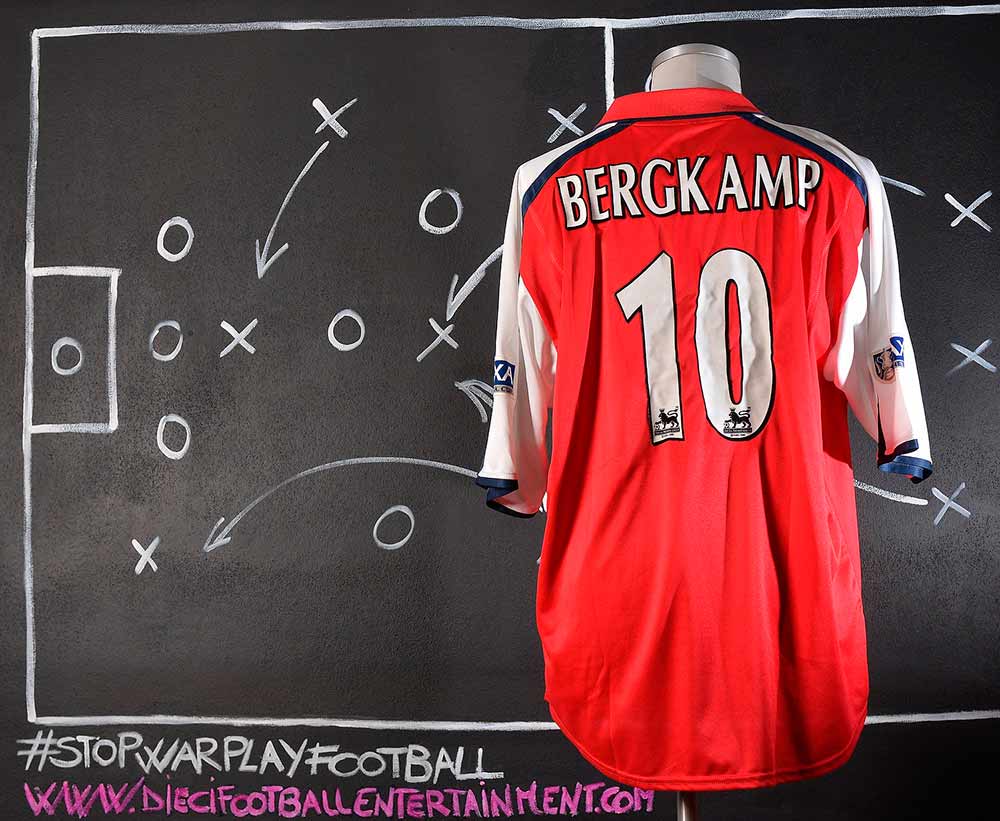 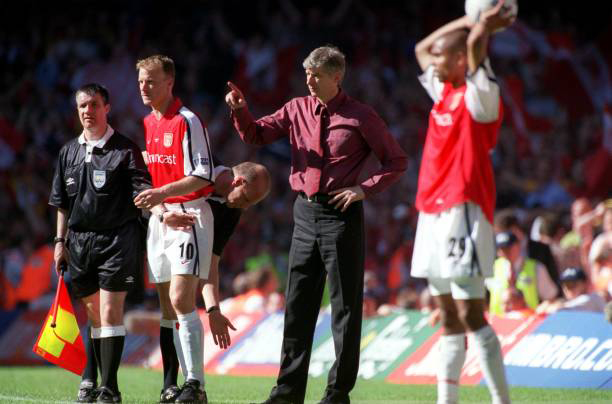 The 2001 FA Cup Final was a football match between Arsenal and Liverpool on 12 May 2001 at the Millennium Stadium, Cardiff. It was the final match of the 2000–01 FA Cup, the 119th season of the world’s oldest football knockout competition, the FA Cup, and the first in the competition’s history to be staged outside England, due to the ongoing reconstruction of its usual venue, Wembley Stadium. Arsenal appeared in their fourteenth final to Liverpool’s twelfth. Given both teams were in the highest tier of English football, the Premier League, they entered the competition in the third round. Each needed to progress through five rounds to reach the final. Arsenal’s progress was relatively comfortable; after scoring six past Queens Park Rangers, they knocked out holders Chelsea in the fifth round and later came from behind to beat local rivals Tottenham Hotspur in the semi-final. Liverpool by contrast made hard work of overcoming lower-league opponents Tranmere Rovers and Wycombe Wanderers in the latter rounds of the competition. The final marked the first time that two managers born outside of the British Isles had met in an FA Cup final – French compatriots Arsène Wenger and Gérard Houllier. The match followed a familiar pattern of Arsenal dictating the pace and creating chances, but failing to breach the Liverpool defence. Arsenal had a penalty appeal turned down in the first half, when defender Stéphane Henchoz handled the ball to deny Thierry Henry a goalscoring opportunity. Henchoz’s partner Sami Hyypiä made a series of goalline clearances during the second half, but was helpless to stop Arsenal taking the lead in the 72nd minute. Liverpool responded by making changes and equalised in the 83rd minute; Arsenal’s failure to deal with a free-kick presented Michael Owen the chance to score. Owen then outpaced Lee Dixon and Tony Adams to score his second and the match winner, two minutes before the end of normal time. Liverpool’s victory marked the second part of their unique treble of the 2000–01 season: they had won the Football League Cup in late February and added the UEFA Cup four days later.

Bergkamp’s nickname is the Non-Flying Dutchman due to his fear of flying. This stemmed from an incident with the Netherlands national team at the 1994 World Cup where the engine of the plane cut out during a flight, prompting a journalist to joke about having a bomb in his bag. Following this incident, Bergkamp decided he would never fly again but did consider seeking psychiatric help: “I’ve got this problem and I have to live with it. I can’t do anything about it, it is a psychological thing and I can’t explain it. I have not flown on a plane for two years. The Dutch FA has been sympathetic, so have Arsenal, so far. I am considering psychiatric help. I can’t fly. I just freeze. I get panicky. It starts the day before, when I can’t sleep.” The condition severely limited his ability to play in away matches in European competitions and to travel with the national team. In some cases, he would travel overland by car or train, but the logistics of some matches were such that he would not travel at all. In the build-up to Arsenal’s Champions League match against Olympique Lyonnais in February 2001, Wenger spoke of his concerns for Bergkamp travelling by train and car, because of the exertions involved. 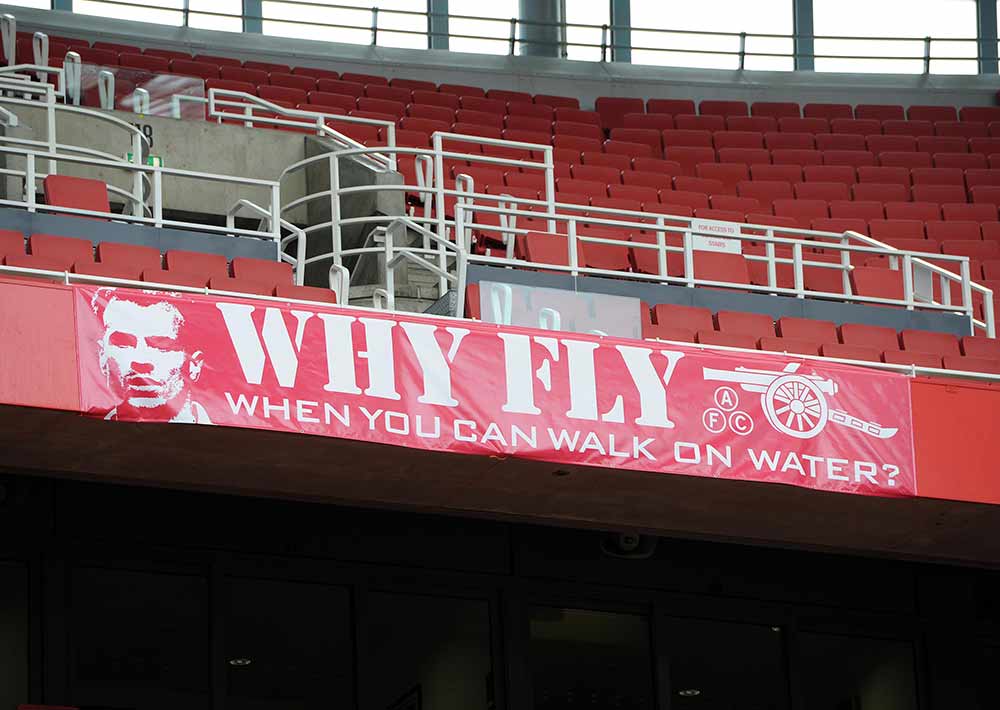 Grosso Grosso2021-01-05T12:57:11+00:00
Page load link
This site uses cookie technology, including third parties' ones. If you want to know more click here. If you access any element of this site outside this banner, you consent to the use of cookies. Ok
Go to Top