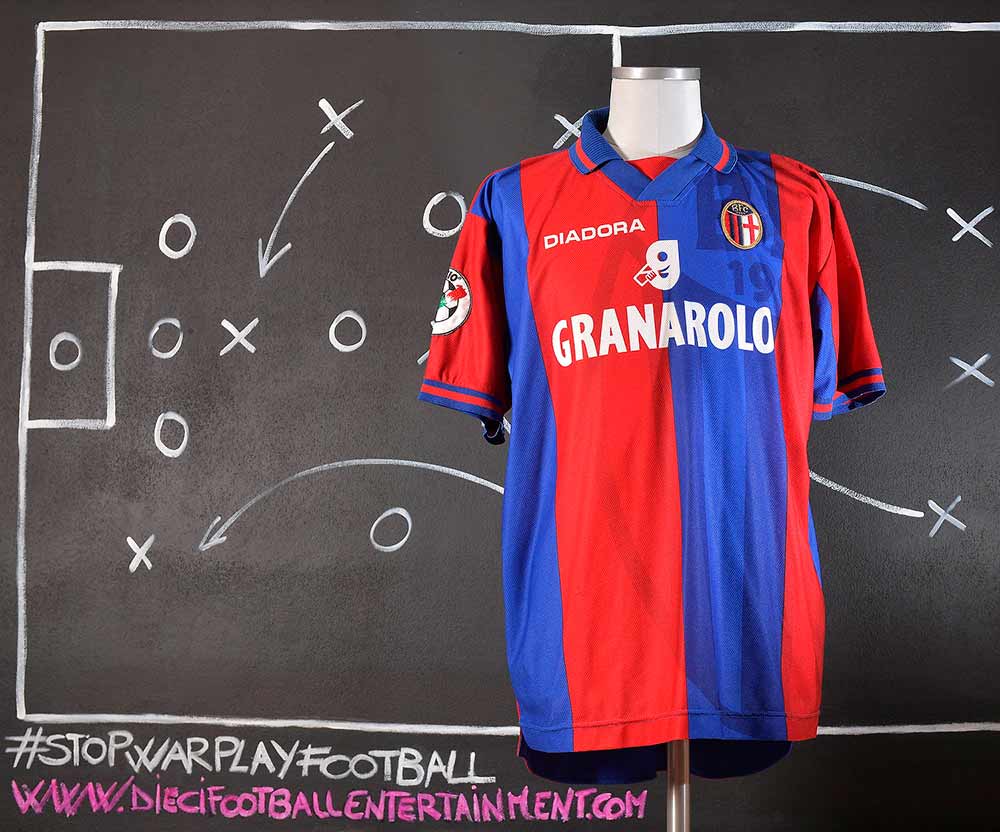 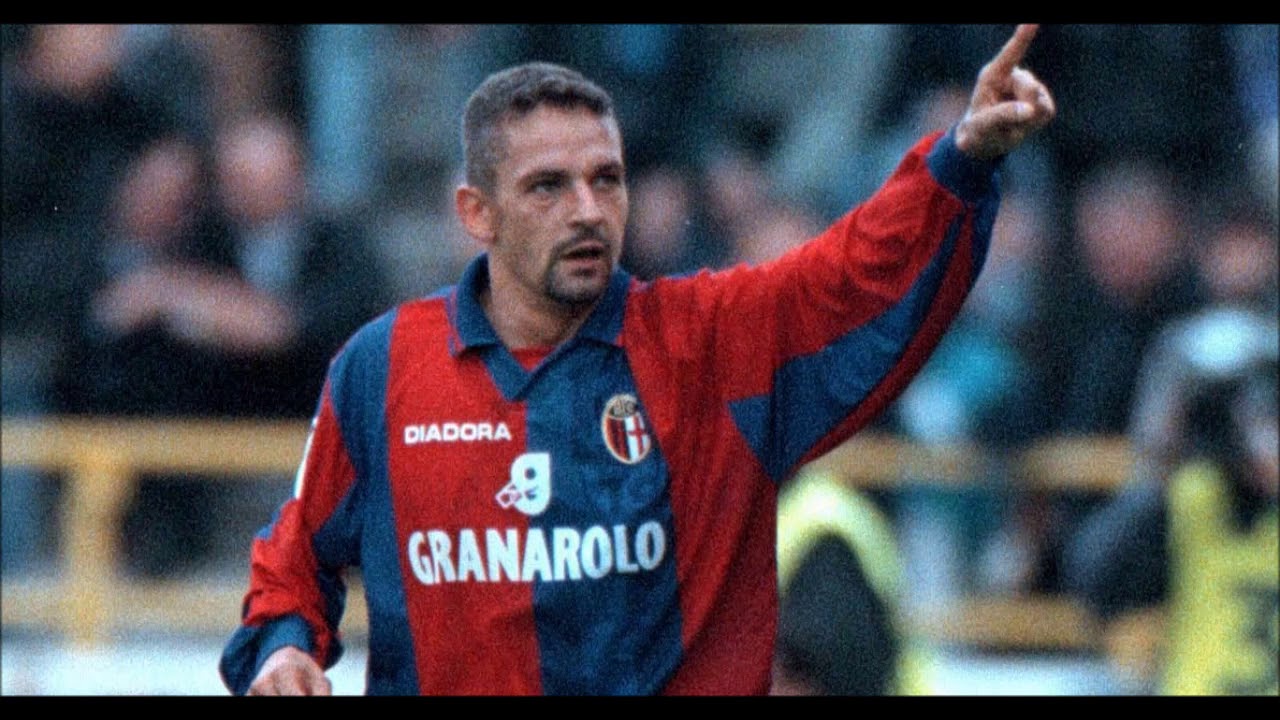 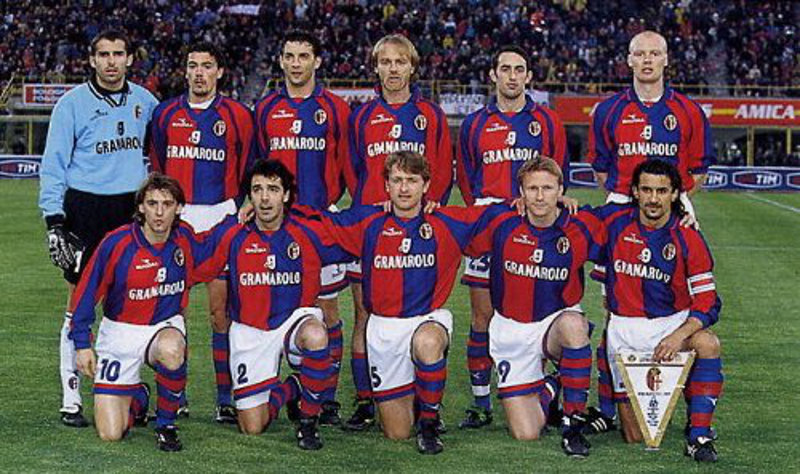 Massimo Brambilla in January 1997, after having spent much time on the bench with Parma, and only making 9 appearances, was purchased outright by Serie A newcomers Bologna, with whom he played an excellent second half of season, collecting 14 appearances, and managing a 7th-place finish in Serie A. In the summer of 1997, Italian star Roberto Baggio transferred to Bologna, and Brambilla remained somewhat on the sidelines, collecting only 2 full appearances during the start of the 1997–98 Serie A season. In October, he moved to a Torino side that had strong ambitions to obtain promotion to Serie A, and in his first season with the club, Brambilla made 26 appearances, scoring 2 goals. Cipriani started his career at Bologna. His impression in youth national teams led Juventus to buy half of his registration rights in 2000 for 4.5 billion lire (€2.324M), Alex Pederzoli (€516,457 or 1 million lire) and Alessandro Gamberini (€2.324M for 50% rights or 4.5 billion lire), and Cipriani and Gamberini remained on loan at Bologna as part of Jonatan Binotto’s permanent deal for 10 billion lire (€5.16 million). After consecutive loans to Piacenza and Sampdoria in 2003-04 season, Bologna bought back Cipriani from Juventus for €417,000 and signed a contract extension in September 2004, into 30 June 2007. In January 2008, Cipriani was loaned again, this time to Serie B’s Avellino. 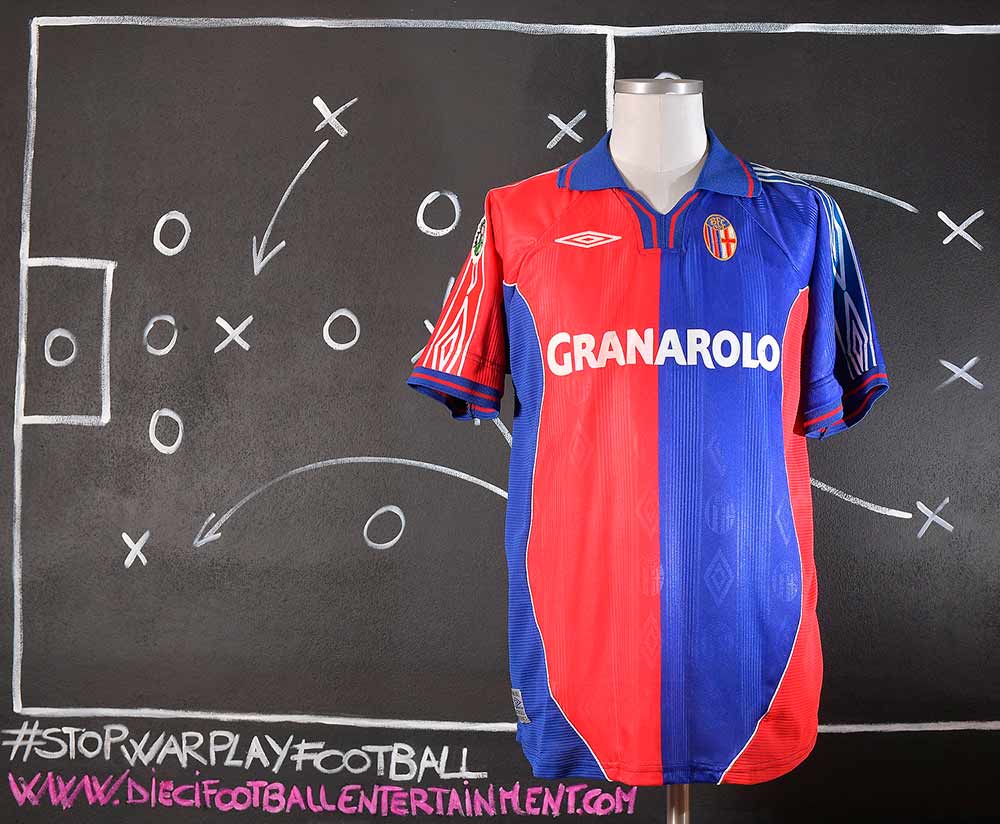 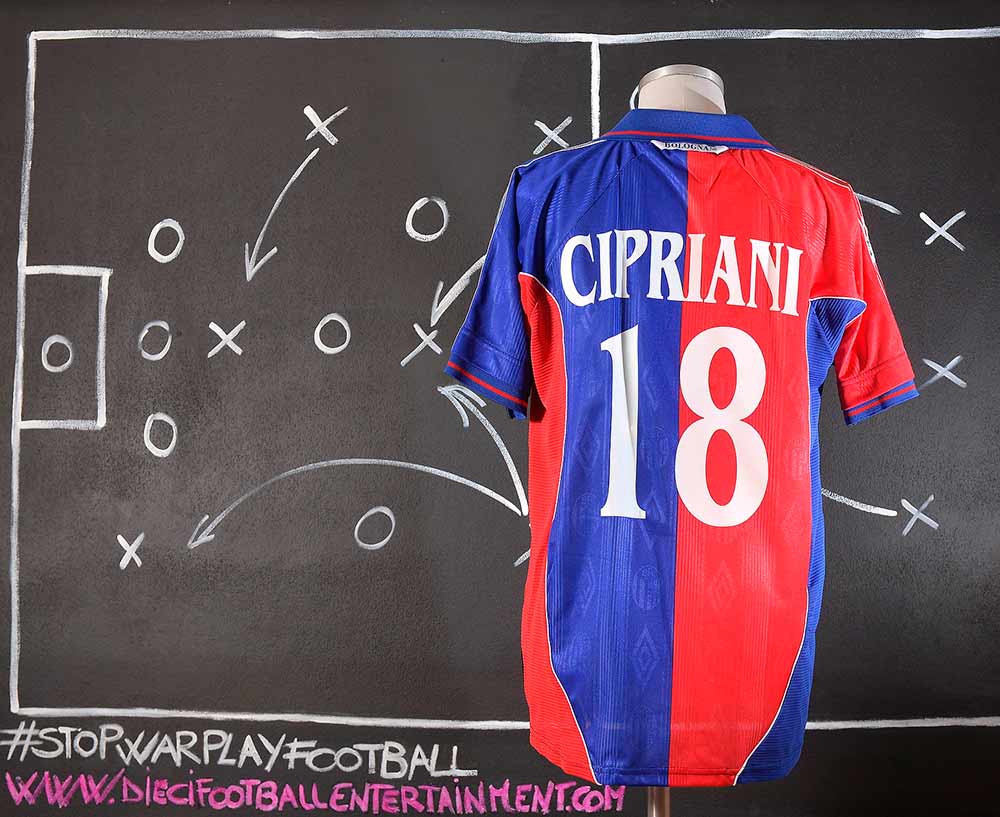 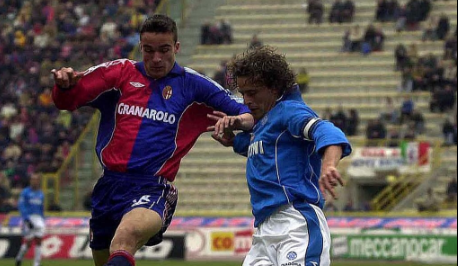 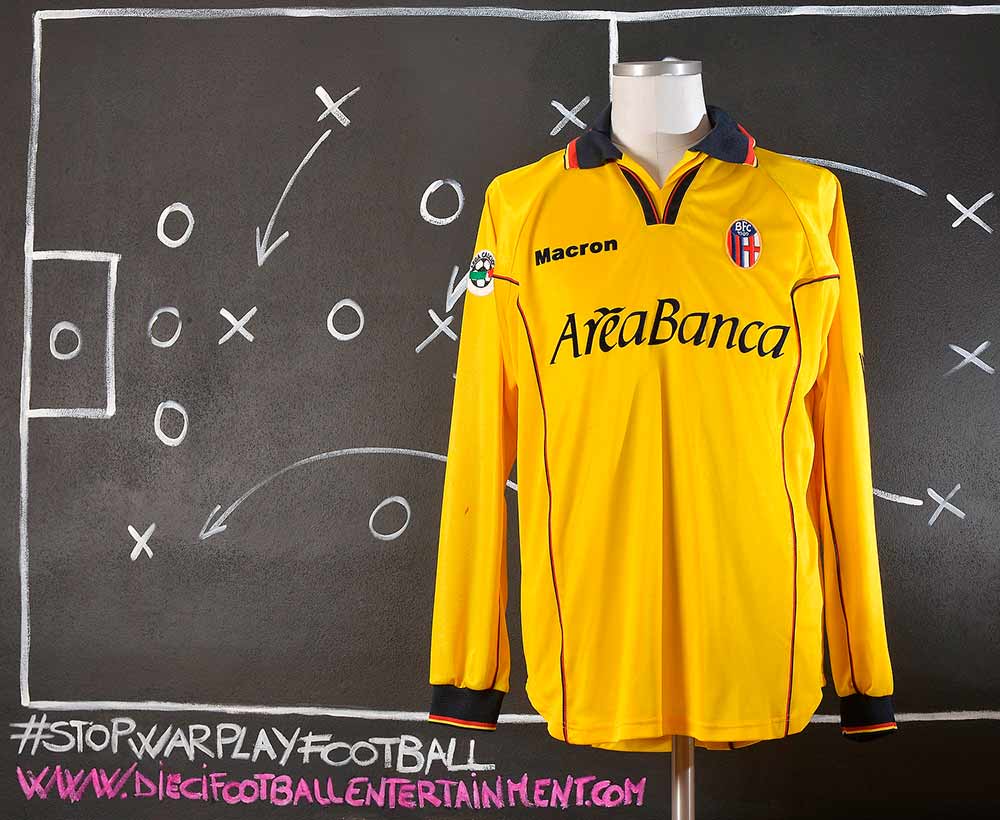 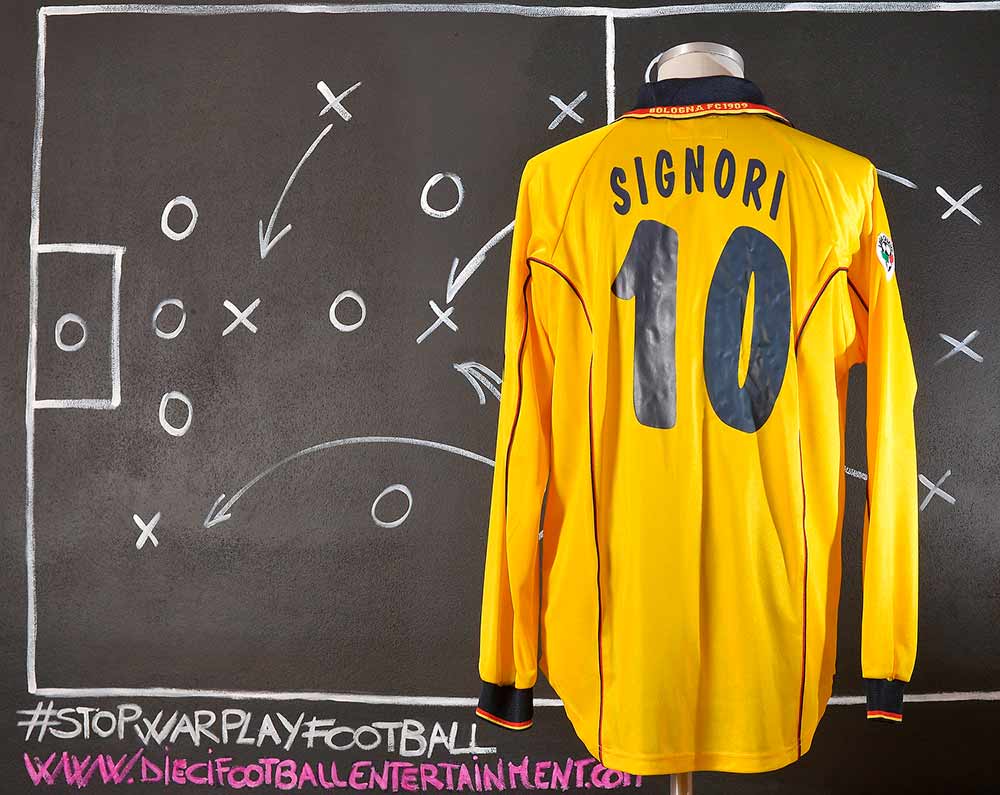 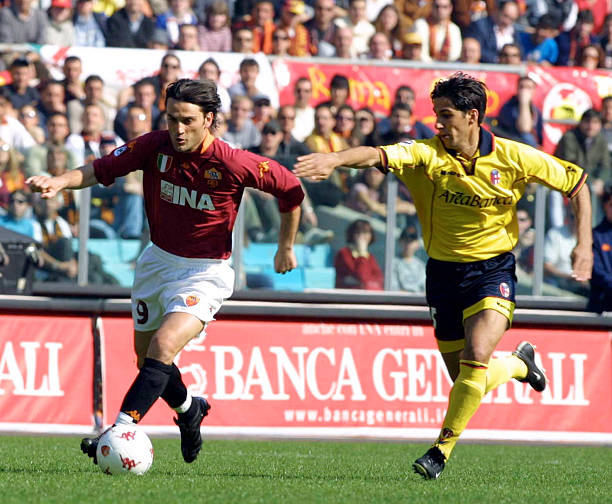 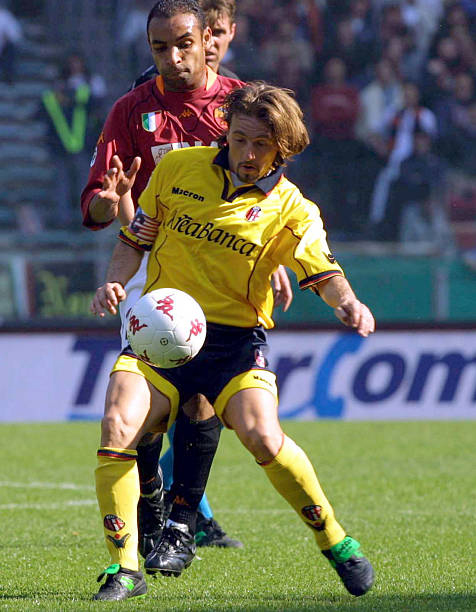 Giuseppe Signori joined Bologna F.C. in the season 1998-1999. He helped the club to qualify for the 1998–99 UEFA Cup by winning the 1998 UEFA Intertoto Cup that season. Bologna went on to reach the semi-final of the UEFA Cup that season. He played 6 seasons with Bologna F.C. scoring 84 goals in 178 games.. Almost one goal every two games which is an incredible average considering that he was not playing for a top team. Overall, he scored 188 goals in Italy’s top division, the ninth highest in the history of the league, alongside Alessandro Del Piero and Alberto Gilardino. Christian Amoroso is an Italian former footballer who played as a midfielder. After spells with Fiorentina and Empoli, Amoroso was signed by Bologna in the summer of 2002, on a free transfer. On 11 August 2009, he signed a 1-year contract with Ascoli of Serie B. He played his first match for the club on 15 August, a Coppa Italia match losing to Cittadella in 1–2. He ended his playing career with his hometown club, Pisa. 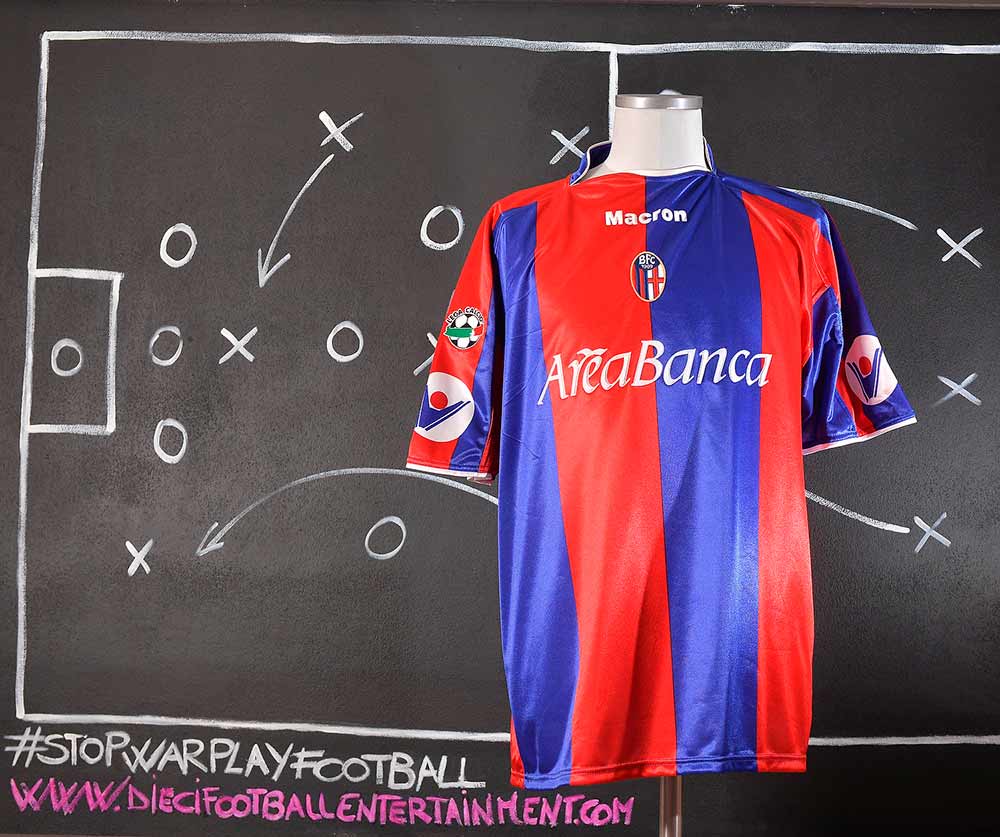 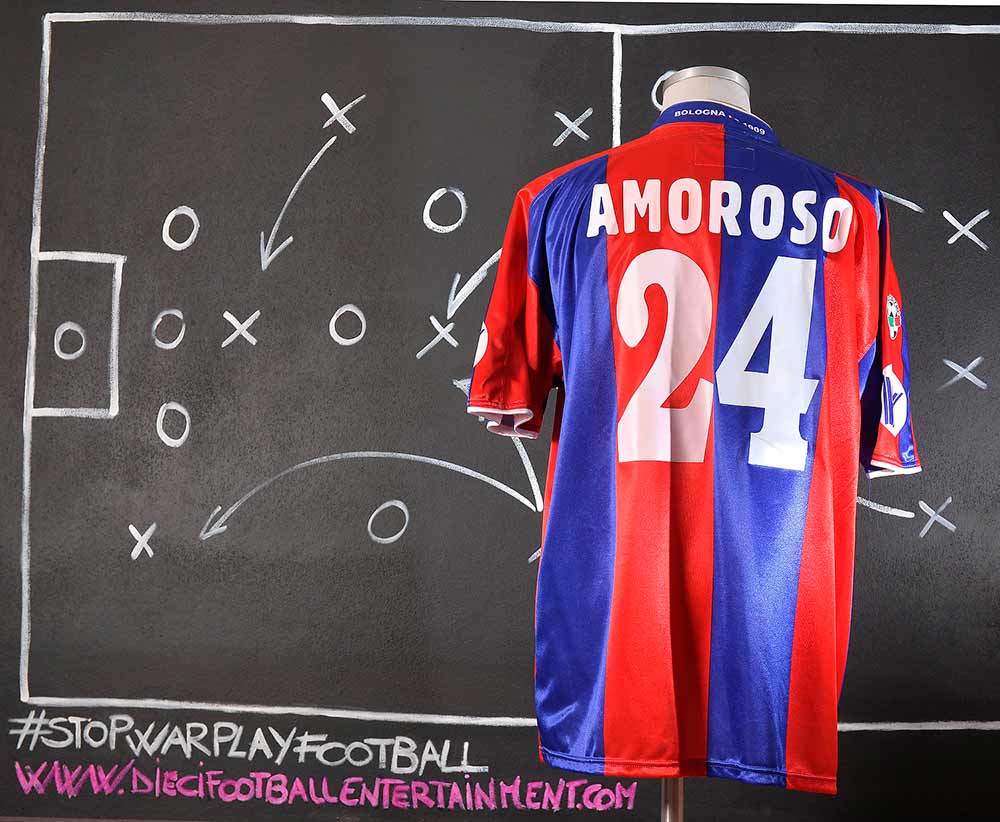 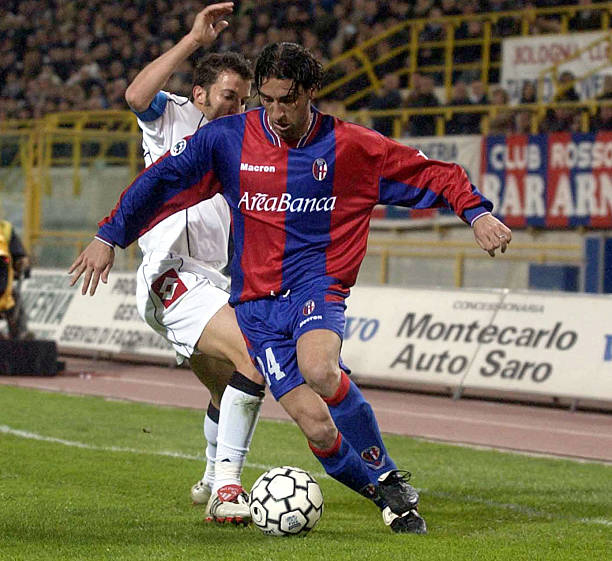 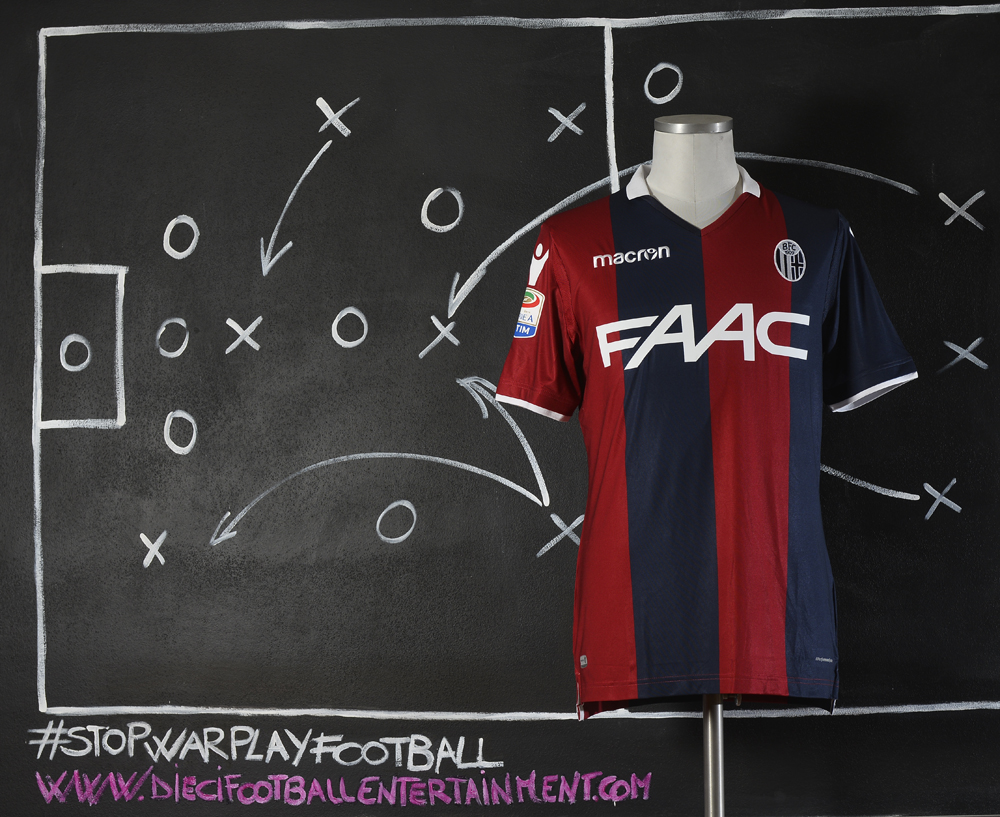 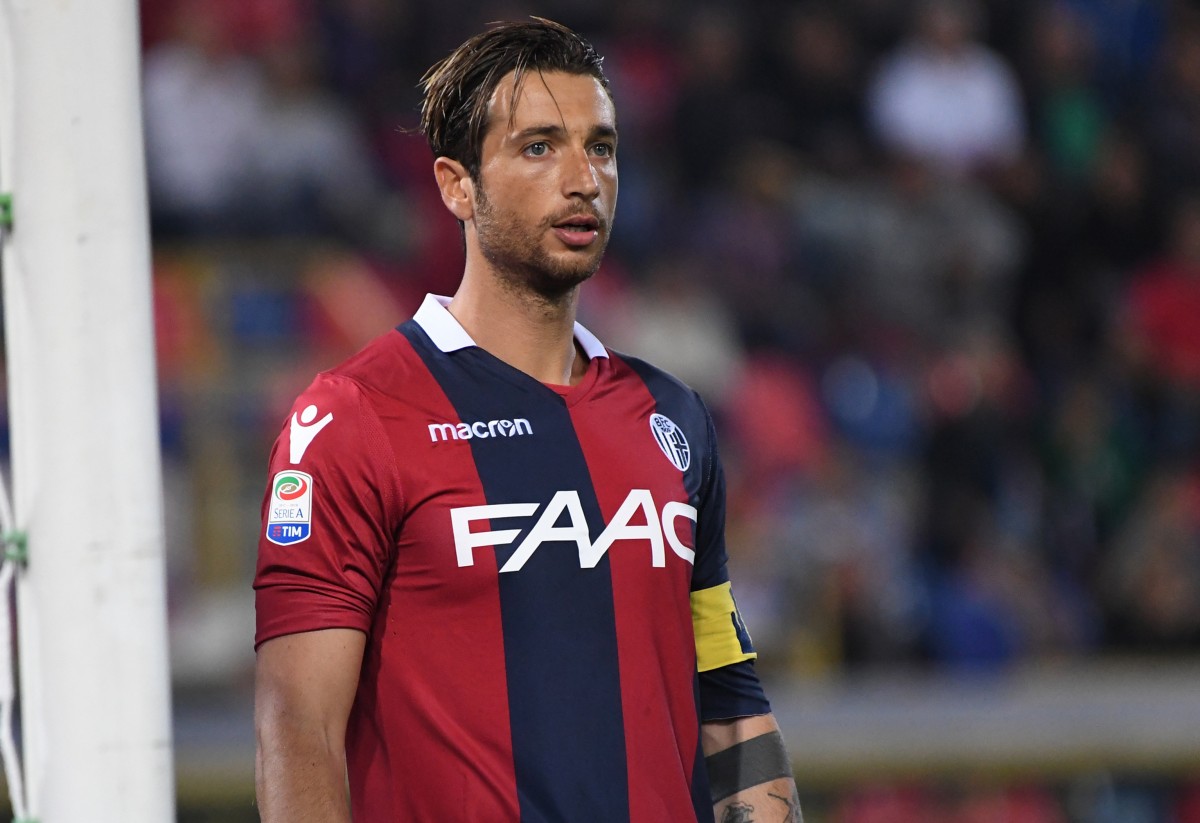 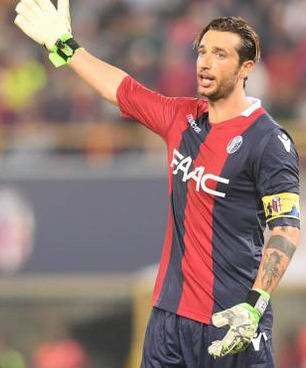 Mirante was signed by Bologna on a free transfer on 3 July 2015. He was the first choice of the team. On 19 July 2016 Mirante signed a new three-year contract. However, at the start of 2016–17 season he was diagnosed with a heart problem and had to undergo testing which ruled him out indefinitely; on 31 August 2016 the club signed Alfred Gomis on loan from Torino as an emergency replacement. After missing the next two and a half months of the season, he was finally cleared to play in mid November. Mirante made his debut since his injury on 28 November 2016 against Atalanta. He was the captain of Bologna in 2017–18 season, his last season with the club. On 22 June 2018 Mirante joined Roma from Bologna for €4 million transfer fee, signing a 3-year contract. 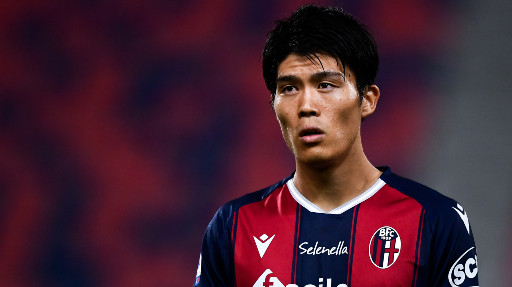 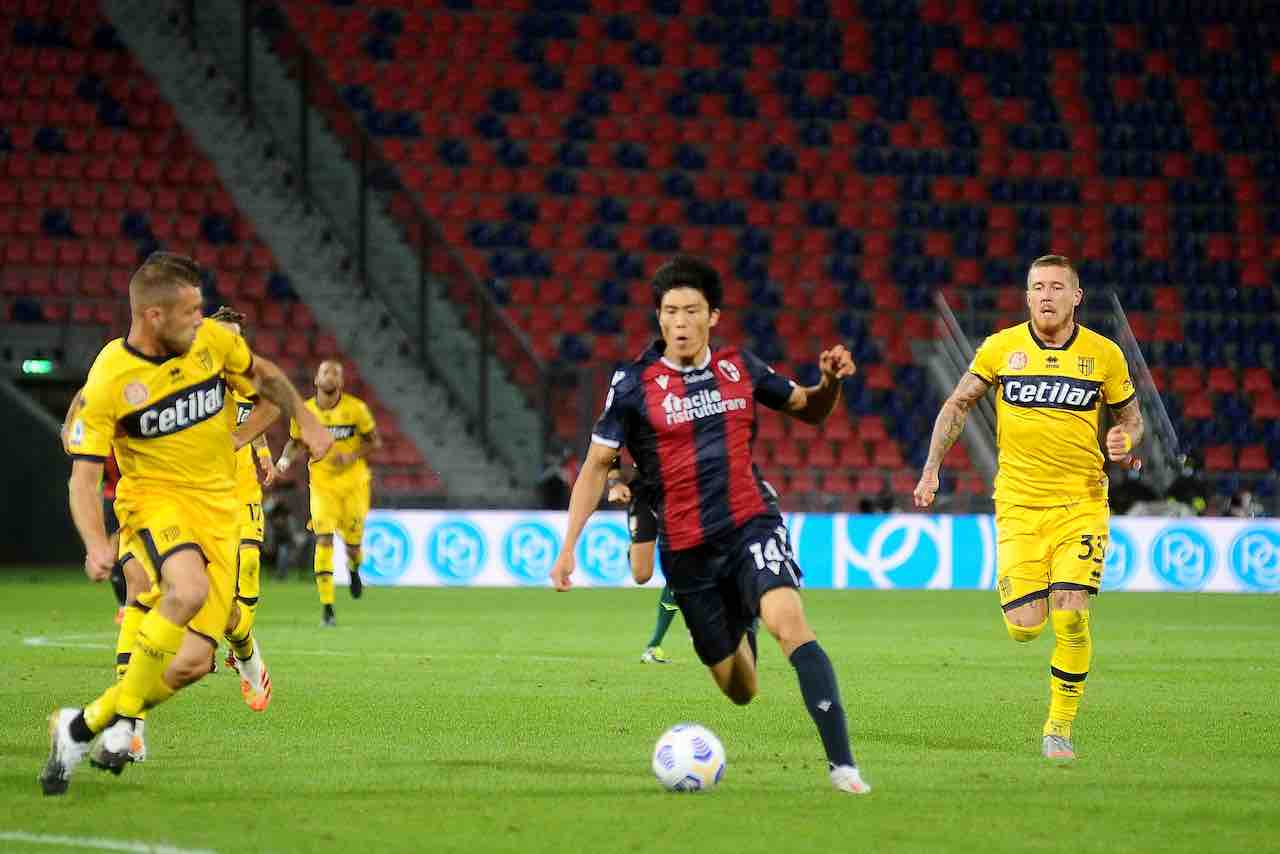 This shirt was worn by Takehiro Tomiyasu during the Serie A game between Bologna and Parma which took place in Bologna, “Renato Dall’Ara” Stadium, on September 28th 2020. Bologna defeated Parma 4-1 and at the end of the game Tomiyasu swapped his shirt with a Parma’s player whom we got it from. Tomiyasu joined Bologna on June 29th 2019 in a 9 million euros deal. The transfer move was confirmed on 9 July 2019 and becomes the second Japanese player to join the club after Hidetoshi Nakata. Upon joining the club, he said: “Impression that the defensive tactics are detailed. The striker level is also very high. “I chose this team because I wanted to learn individual defense tactics. First I wanted to be on the pitch” Tomiyasu made his Bologna debut, starting the whole game, and helped the club win 3–0 against A.C. Pisa 1909 in the first round of the Italian Cup. Seven days later on 25 August 2019, he made his league debut and started the whole game, in a 1–1 draw against Hellas Verona. After the match, Tomiyasu was named Man of the Match for his debut performance. Having made three appearances for the club, he was named August’s Player of the Month. Tomiyasu started in the first league seven matches before suffering a hamstring injury in mid–October that kept him out for a month. It wasn’t until on 24 November 2019 when he made his return to the starting line–up, in a 2–2 draw against Parma. Since joining the club, Tomiyasu quickly established himself in the starting eleven, playing in the right–back position, and his performance has quickly impressed the Italian media and supporters alike. 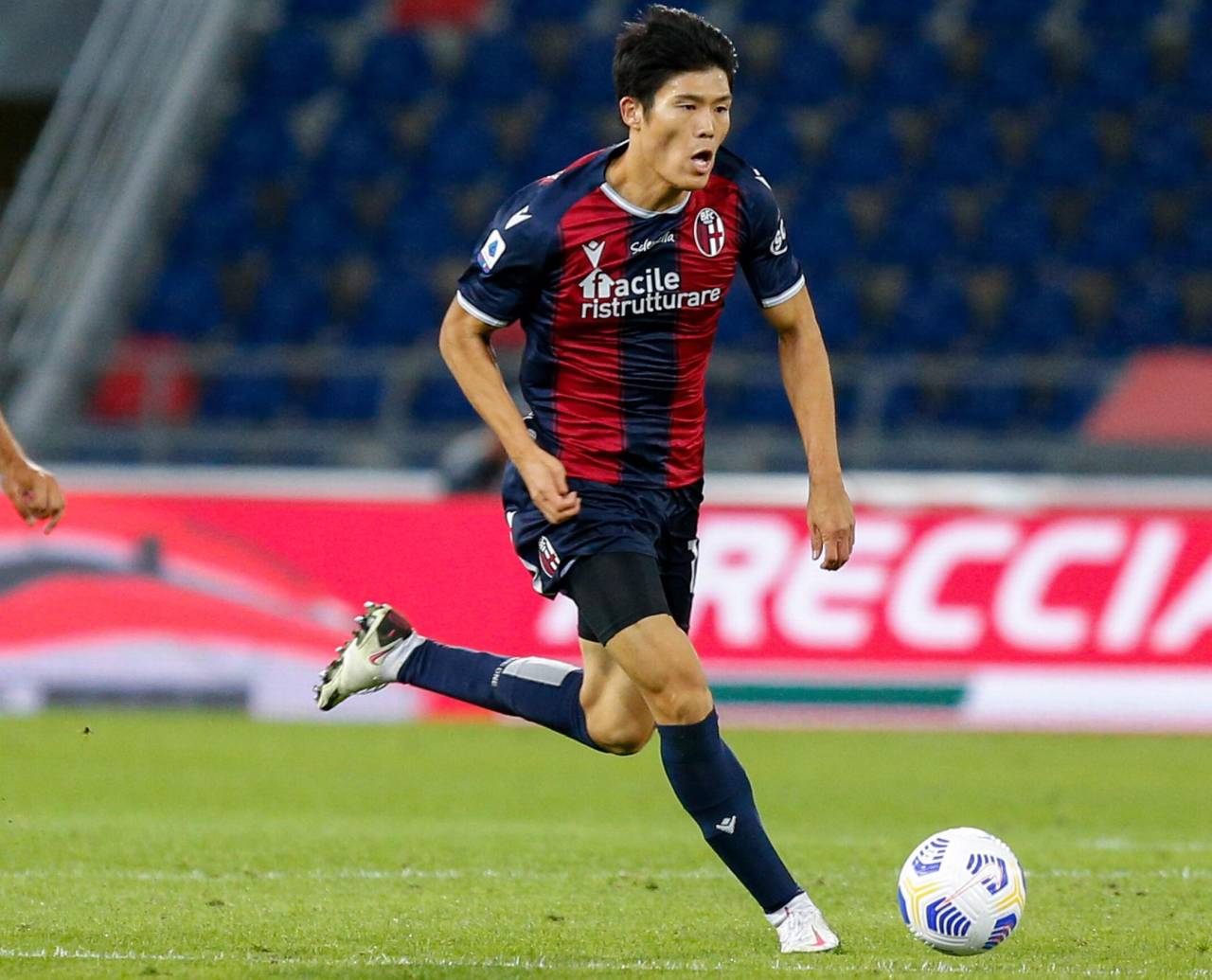 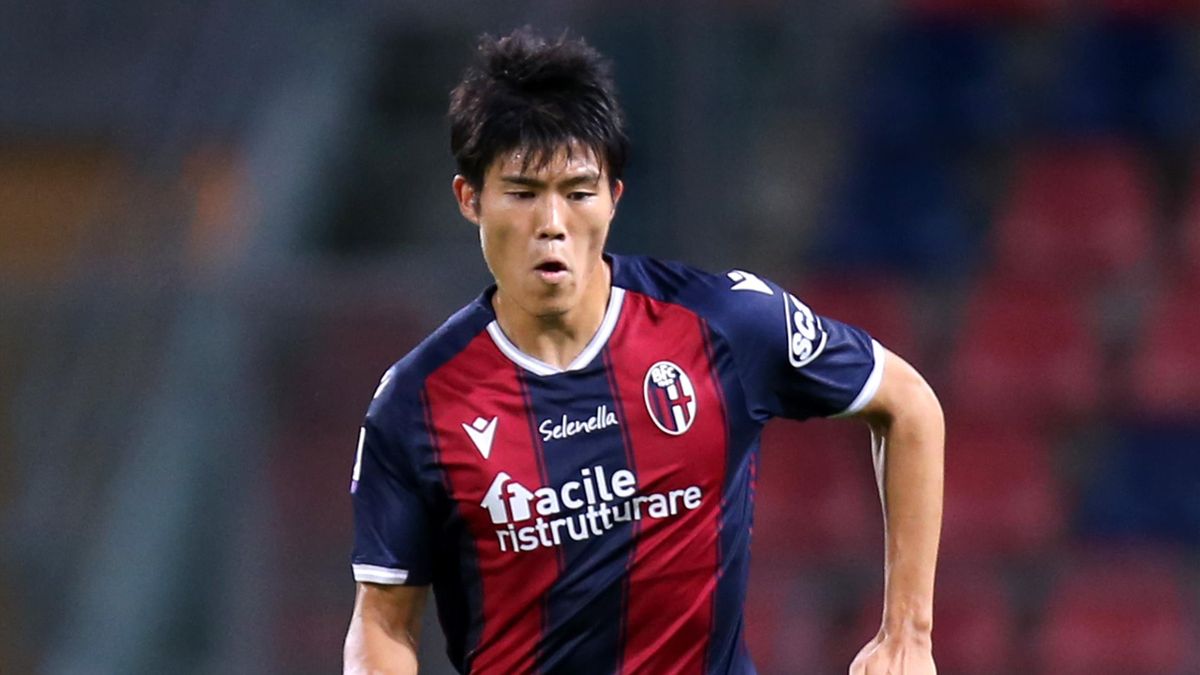 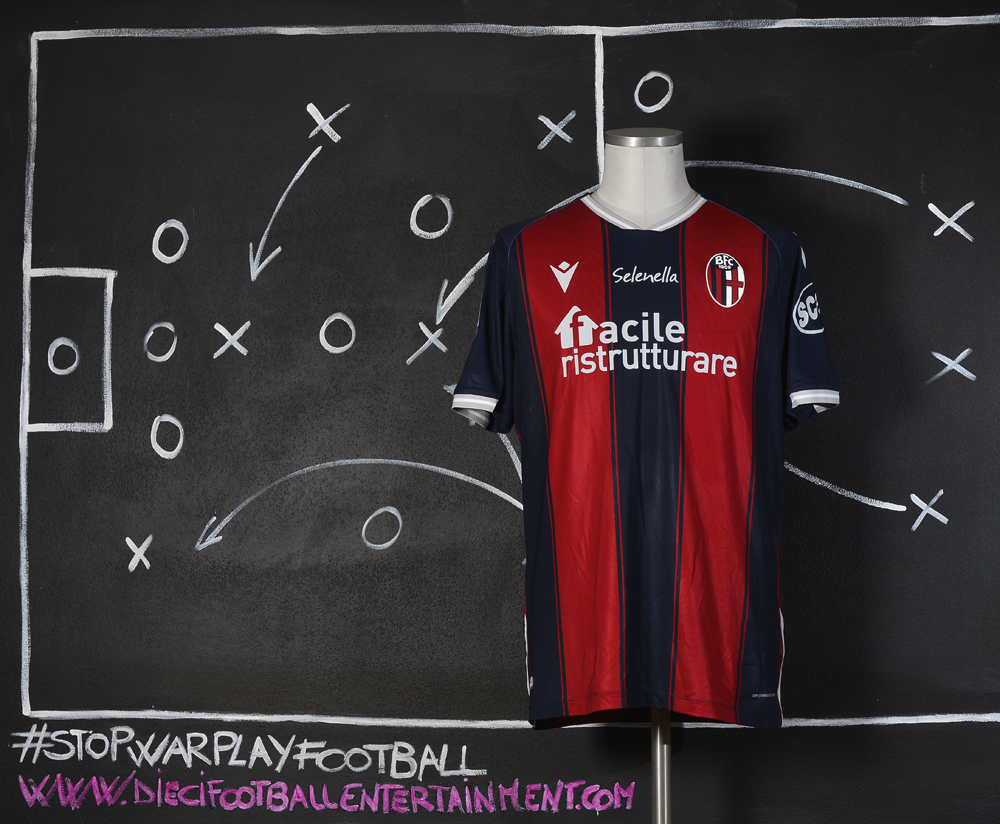 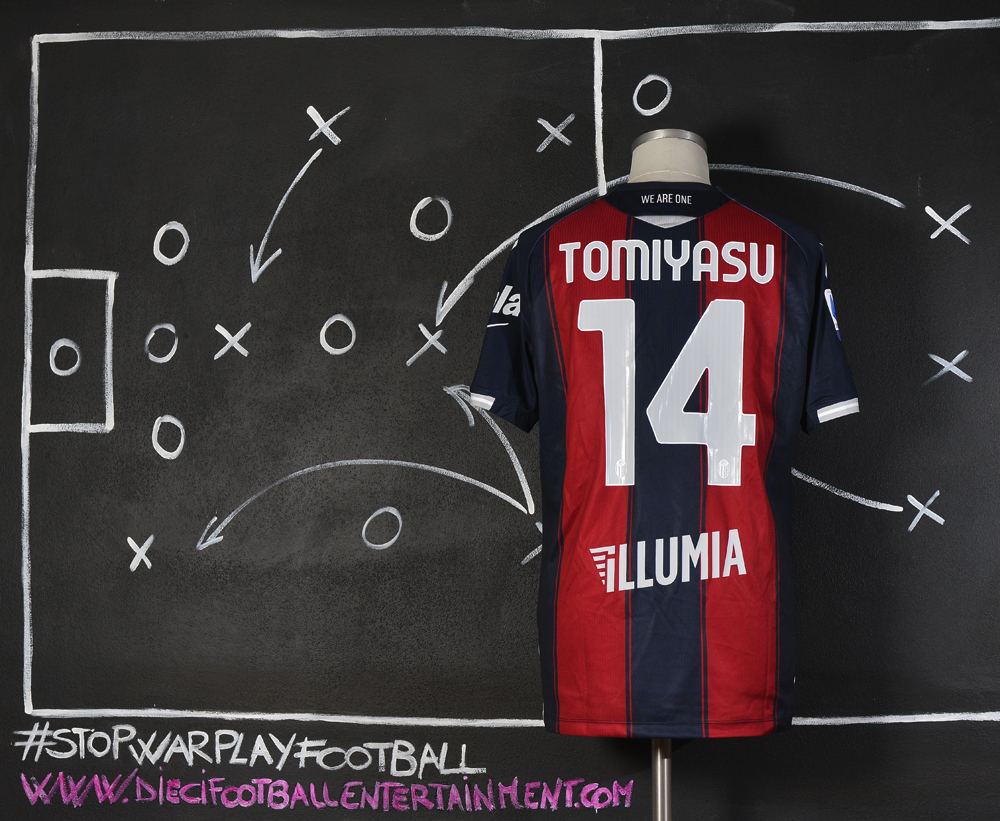 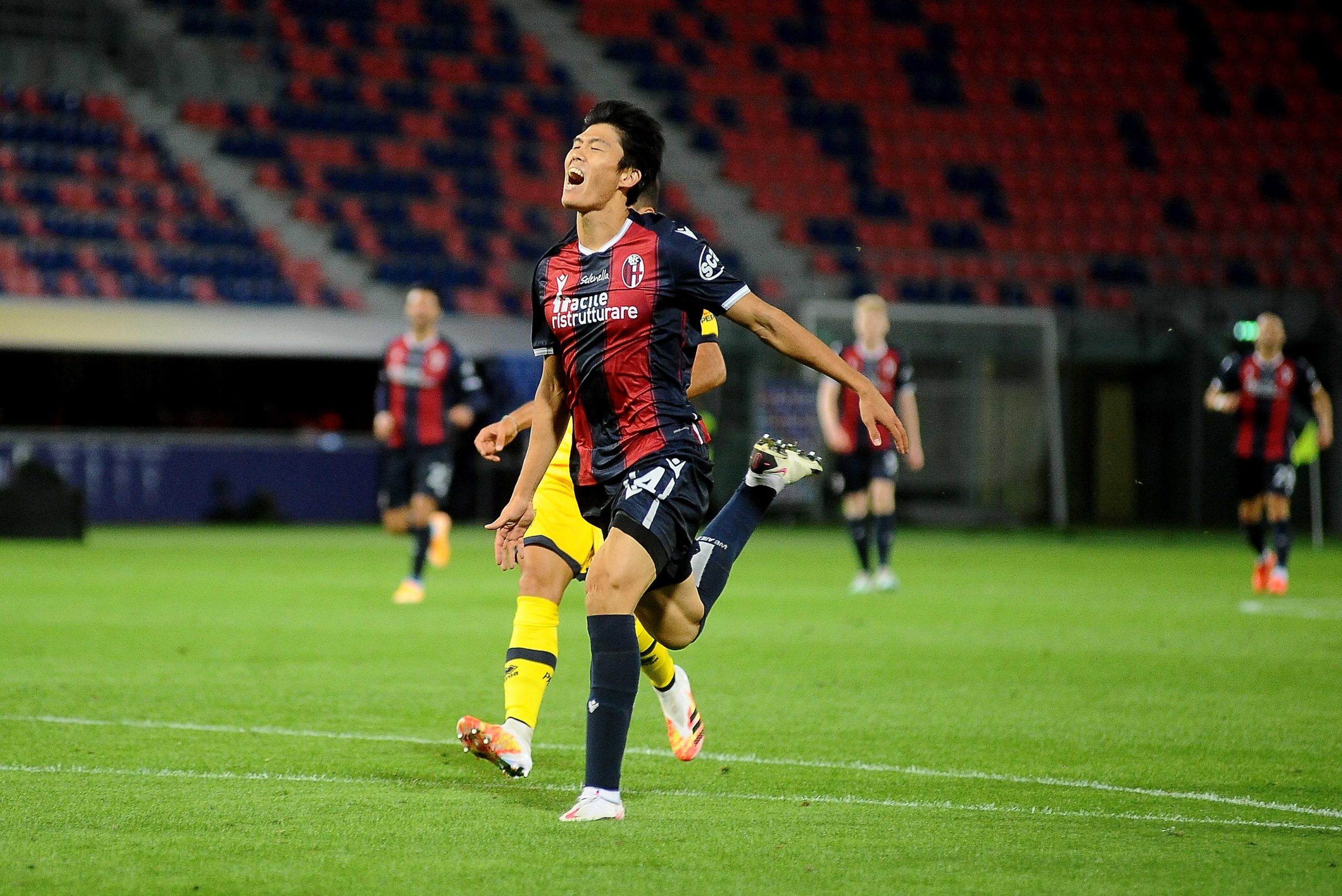 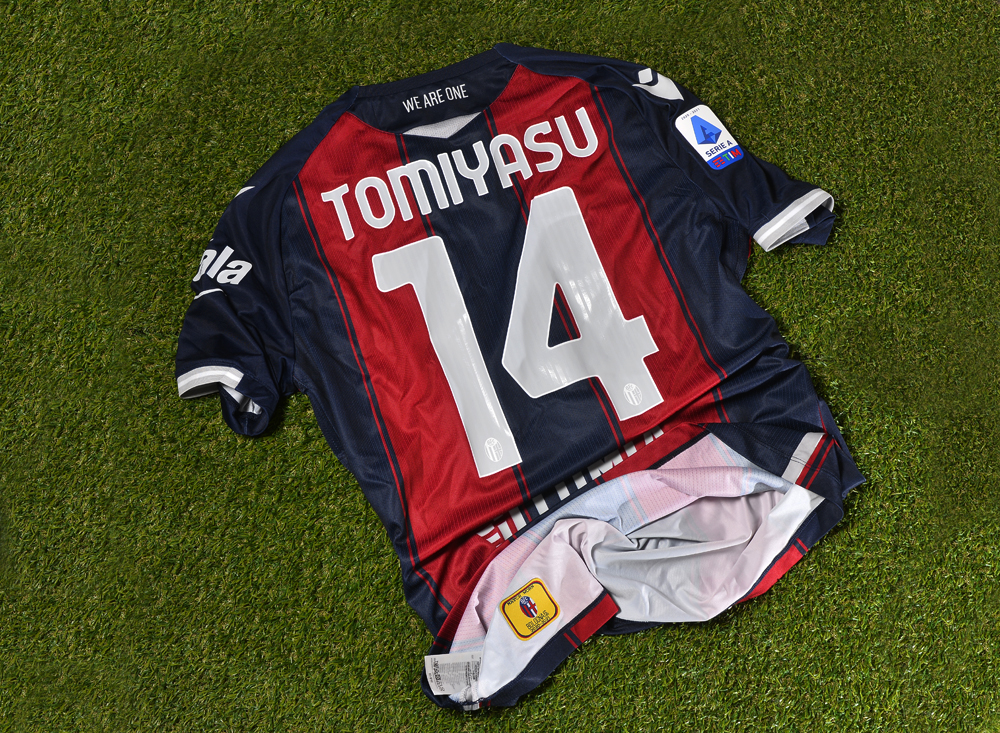 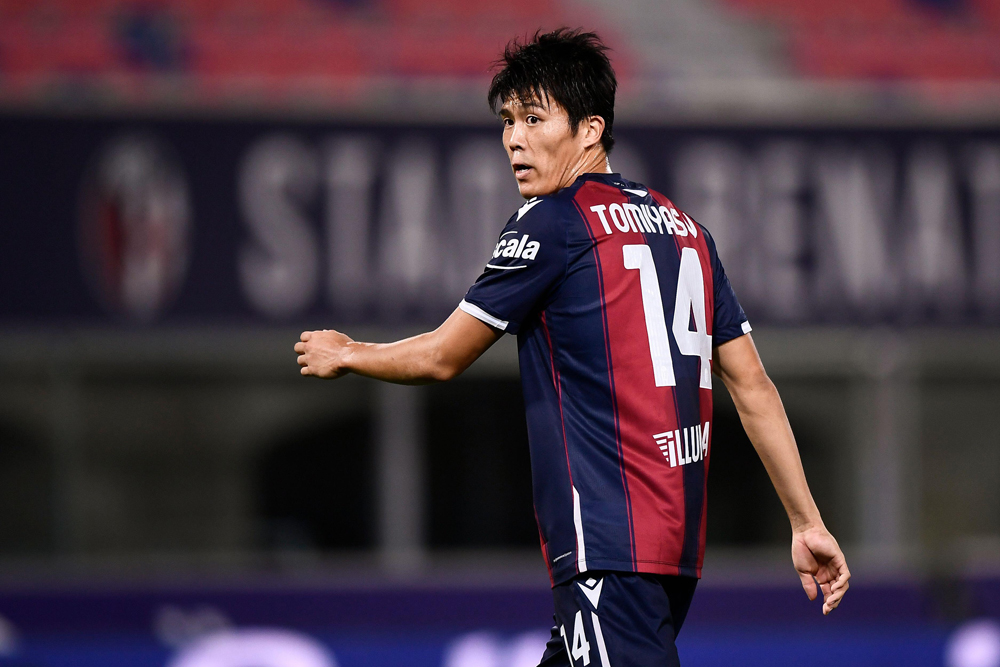 Grosso Grosso2021-05-25T10:23:44+00:00
Page load link
This site uses cookie technology, including third parties' ones. If you want to know more click here. If you access any element of this site outside this banner, you consent to the use of cookies. Ok