Federico Chiesa is an Italian professional footballer who plays for the Italy national football team. He primarily plays as a winger, but can also be deployed as a forward or an attacking midfielder. Chiesa began his youth career with U.S. Settignanese from Settignano, (a frazione northeast of Florence).He joined Fiorentina in 2007. Initially a member of their Giovanili side, Chiesa was assigned to the under-19 squad for the 2014–15 season, and scored a single goal in seven appearances for their Primavera side. The following season, he made 23 appearances and scored seven goals. Chiesa signed his first professional contract with Fiorentina in February 2016. He made his professional competitive debut for Fiorentina in a 2–1 away defeat against Juventus, during the opening fixture of the 2016–17 Serie A season. Fiorentina manager Paulo Sousa opted to replace him at half-time with loan signing Cristian Tello. 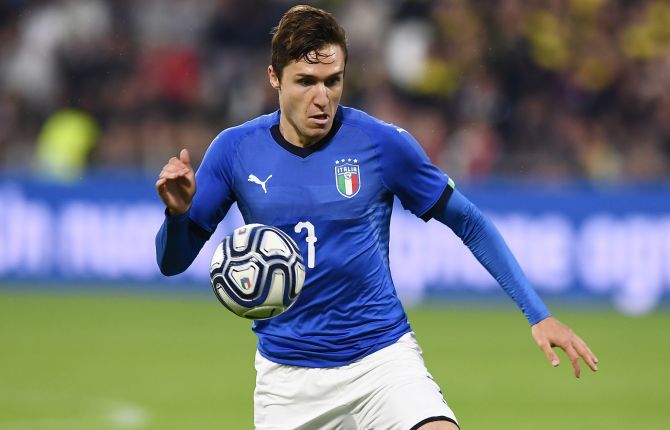 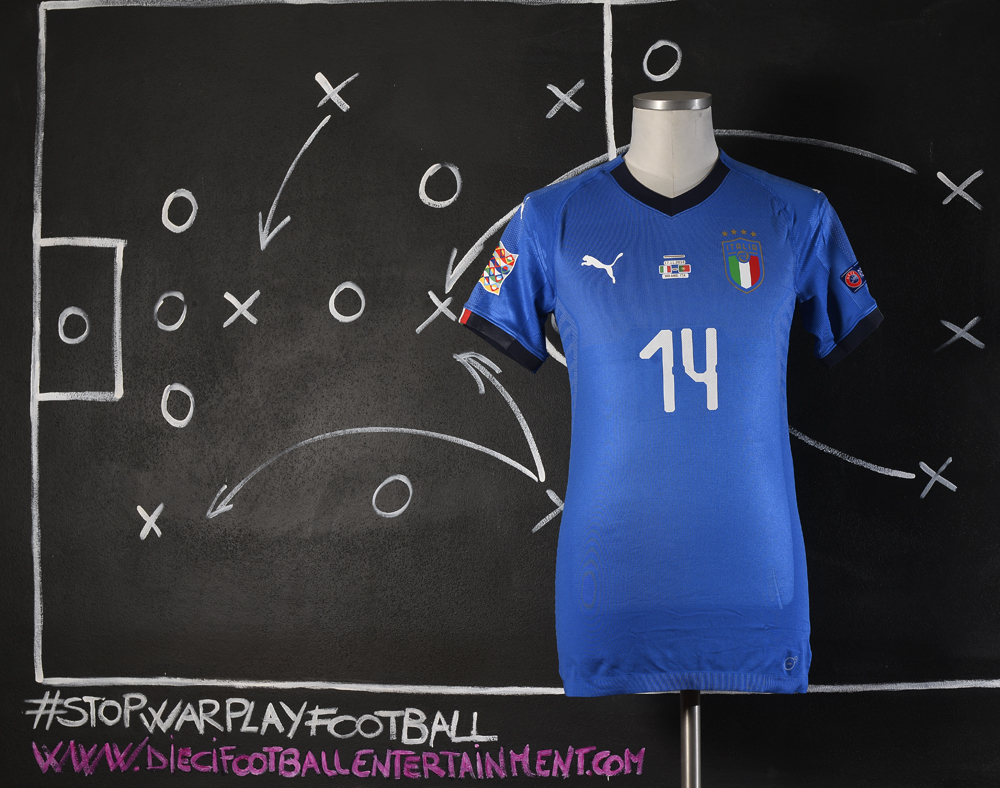 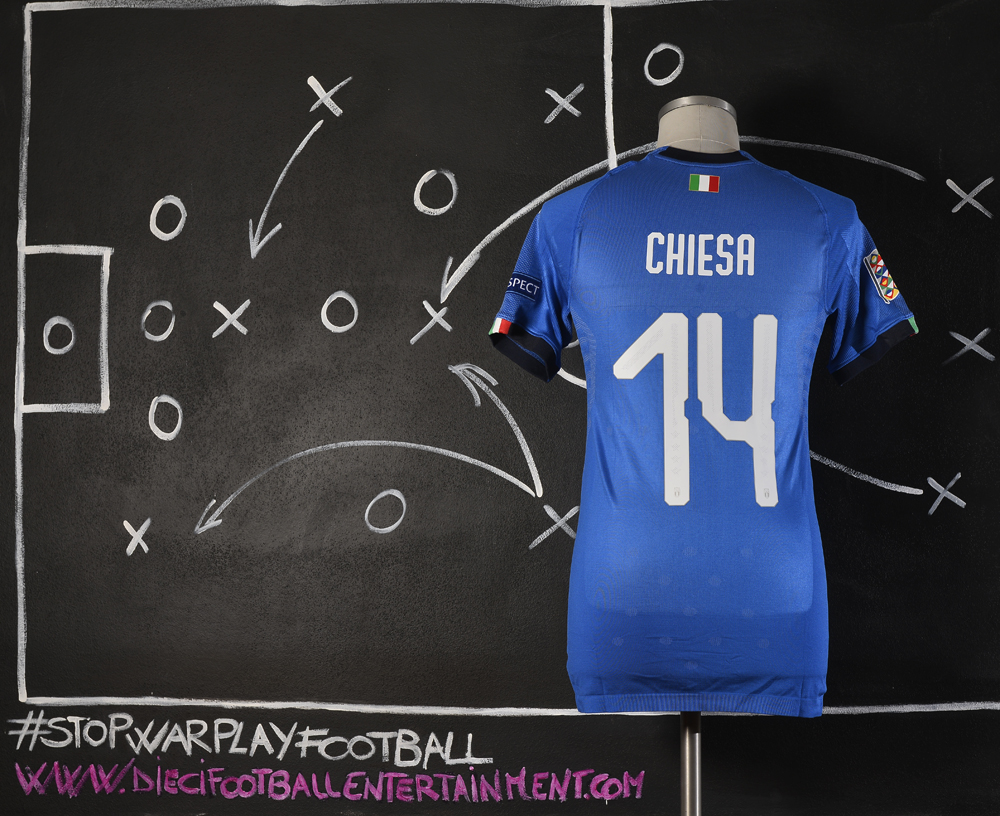 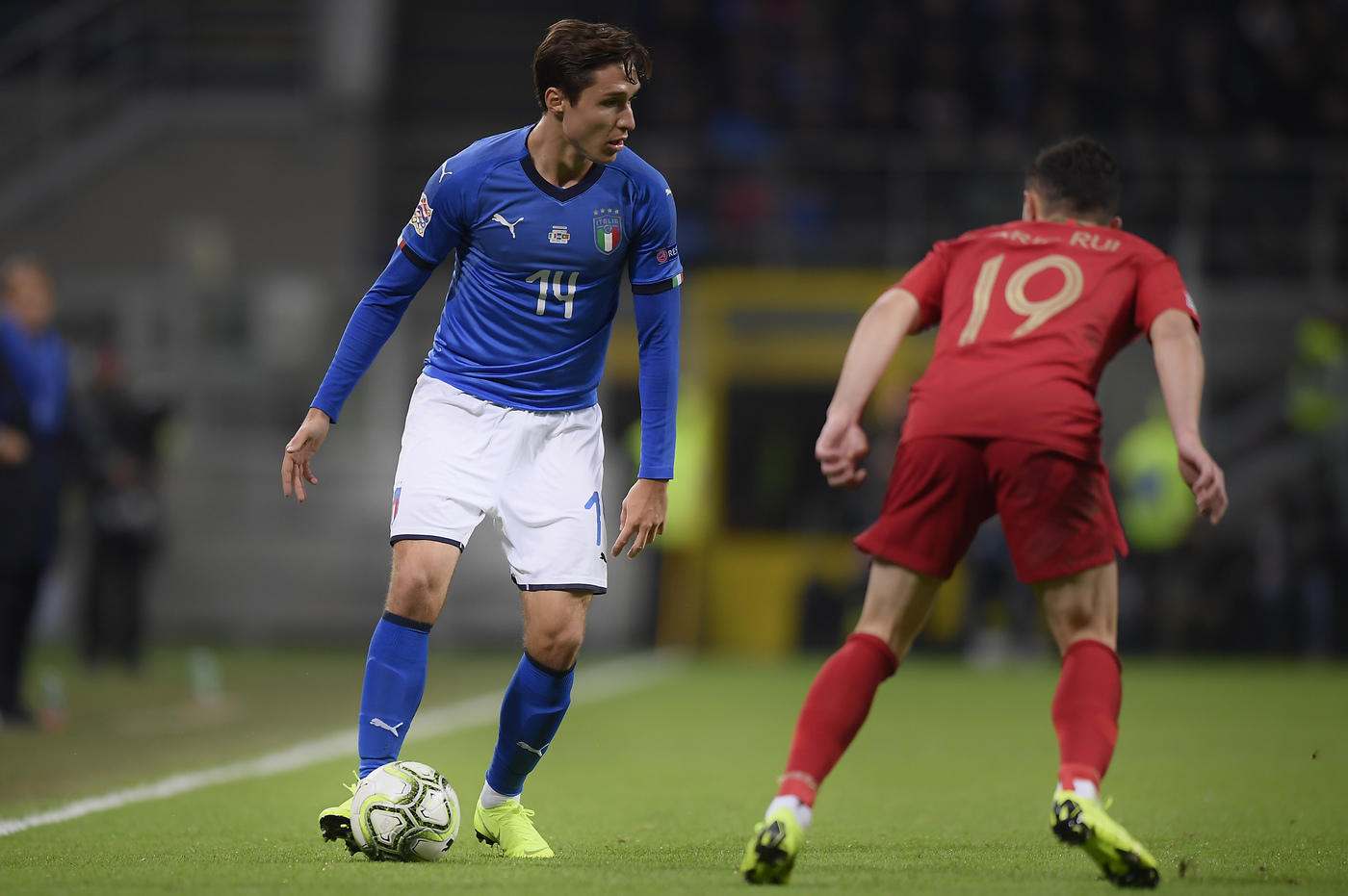 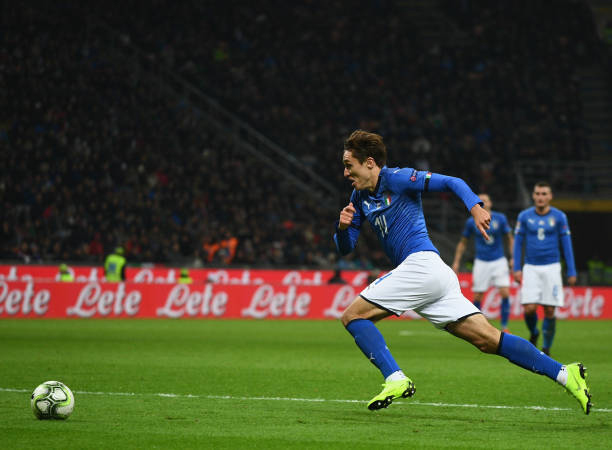 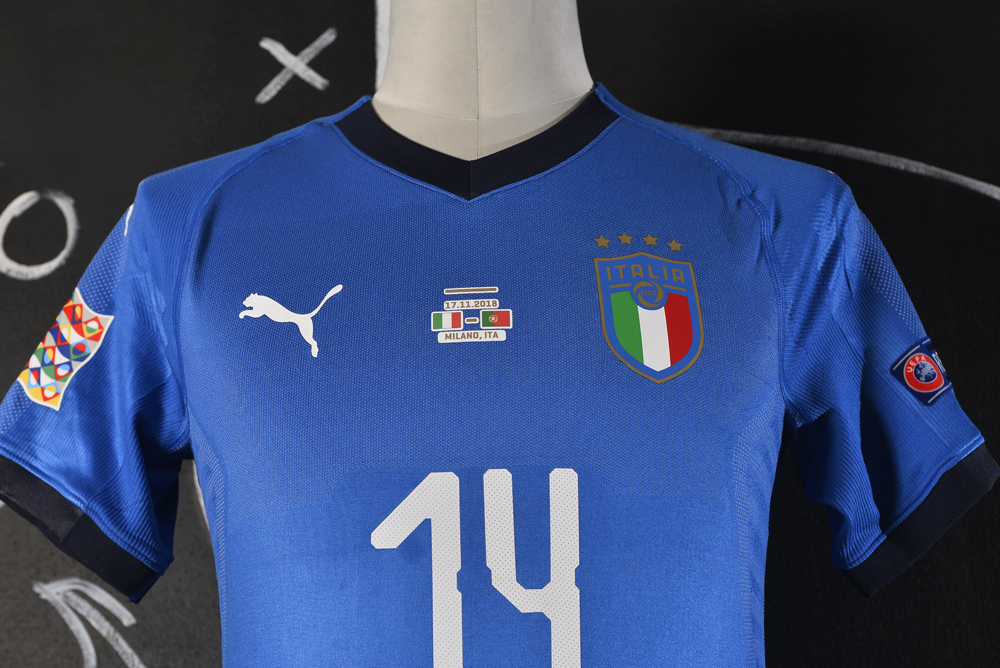 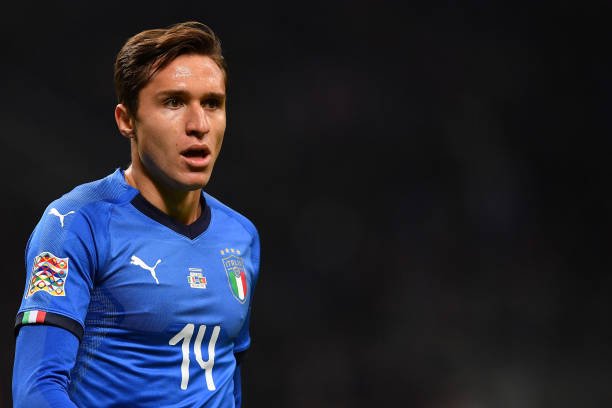 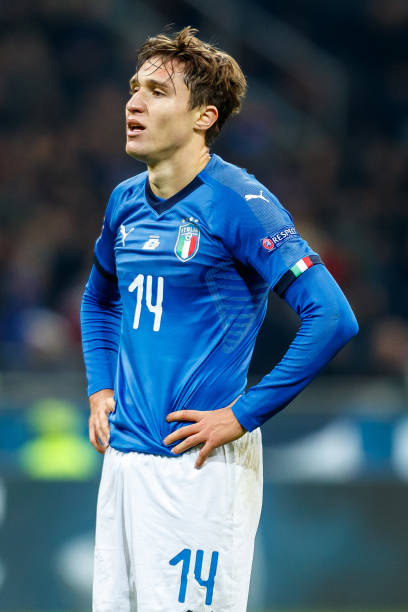 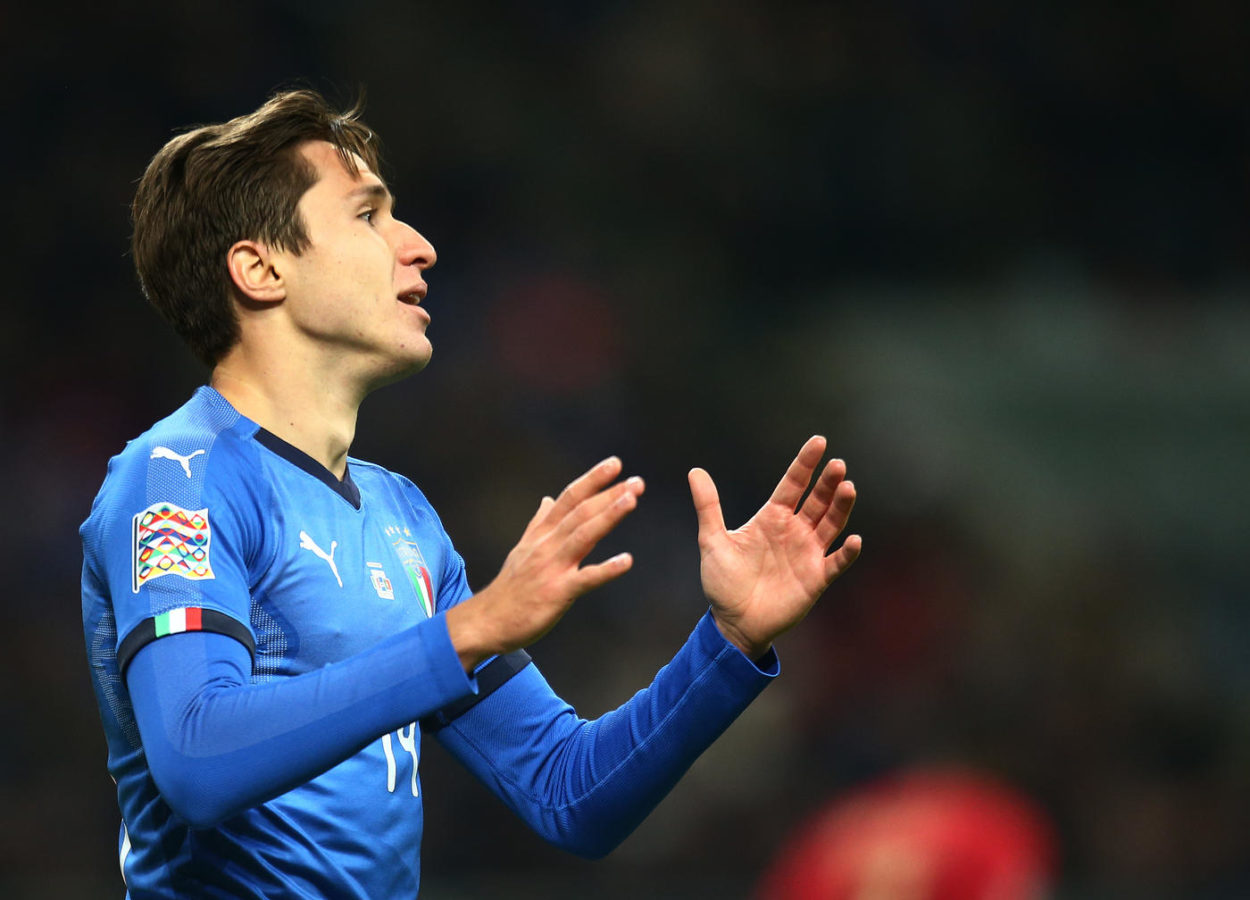 Chiesa was first called-up to the Italy U19 squad back in 2015. He along with fellow Fiorentina teammate Simone Minelli were selected as part of Paolo Vanoli’s preliminary 27-man squad for the 2016 UEFA Euro Under-19 Championship in Germany. Chiesa played for Italy U19s in friendlies against the Czech Republic, Spain and France. In 2016, he received a call-up from Italy U20s’ Alberigo Evani to represent the side at the 2015–16 Under-20 Four Nations Tournament. In March 2017, Chiesa was called up by Italy U21s’ boss Luigi Di Biagio to represent the Azzurrini in friendlies against Poland and Spain. He made his debut with the Italy U21 team on 23 March 2017, in a 1–2 victory against Poland. Chiesa provided the assist to Lorenzo Pellegrini’s opener. He retained his place in the starting line-up against Spain in a 1–2 defeat at the Stadio Olimpico. Despite only being called up to the under-21 side back in March 2017, Chiesa was selected by Italy’s senior head coach Gian Piero Ventura for the team’s unofficial friendly against San Marino in Empoli on 31 May. Chiesa made his unofficial senior international debut in the match, starting in Italy’s eventual 8–0 win. In June 2017, he was included in the Italy under-21 squad for the 2017 UEFA European Under-21 Championship by manager Di Biagio. In March 2018, he was awarded his first official senior call-up to the Italian national team, under interim manager Di Biagio, for Italy’s friendlies against Argentina and England later that month. On 23 March, he made his official senior international debut in the friendly against Argentina; Italy were defeated 2–0. 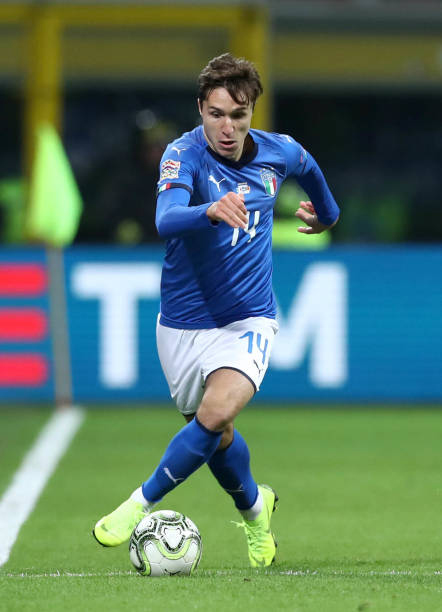 Regarded as a promising young prospect, Chiesa is a talented, fast, skillful, and hardworking player, with good technique, a short stature, and a slender build. He usually plays as a left winger, a position which enables him to beat opponents with the ball, cut into the centre, and shoot on goal from outside the area with his stronger right foot, although he is also an accurate striker of the ball with his left foot; he is also capable of creating chances for teammates as well as scoring goals himself. He is also known for his defensive contribution off the ball, and has been deployed anywhere along the front line, as well as in several midfield positions, most frequently as either an attacking or central midfielder, although he has also been used as a main or second striker on occasion. Chiesa is the son of Enrico Chiesa, a former professional footballer who played for the likes of Cremonese, Sampdoria, Parma, Fiorentina, Lazio and Siena, and represented the Italian national team. He enrolled at the International School of Florence, where he frequently took lessons in learning English. Chiesa also spent two years at university, studying Sports Science. 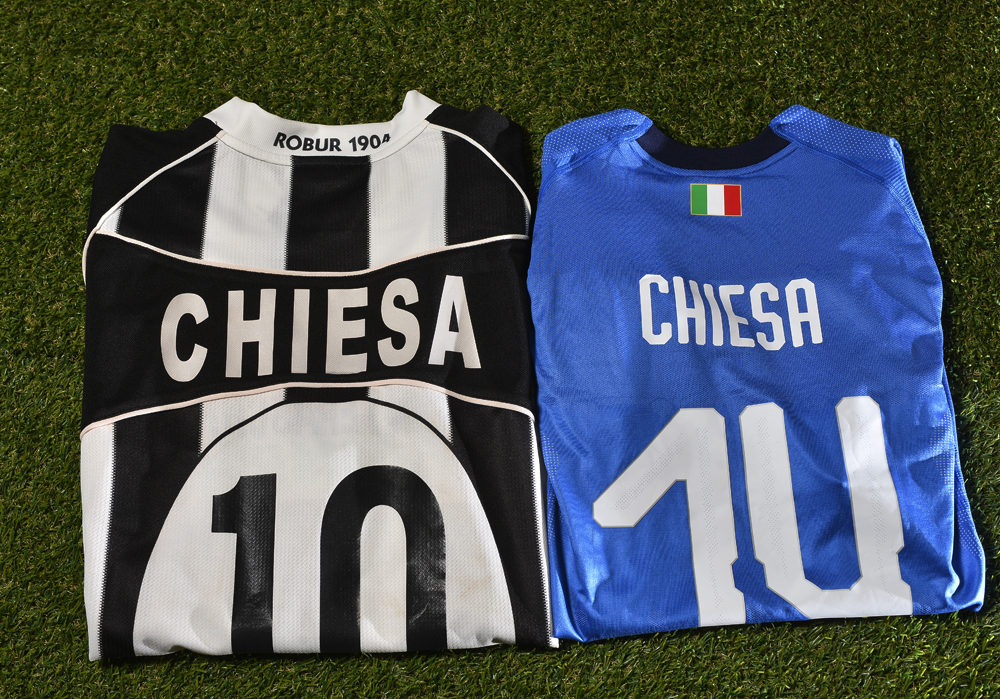 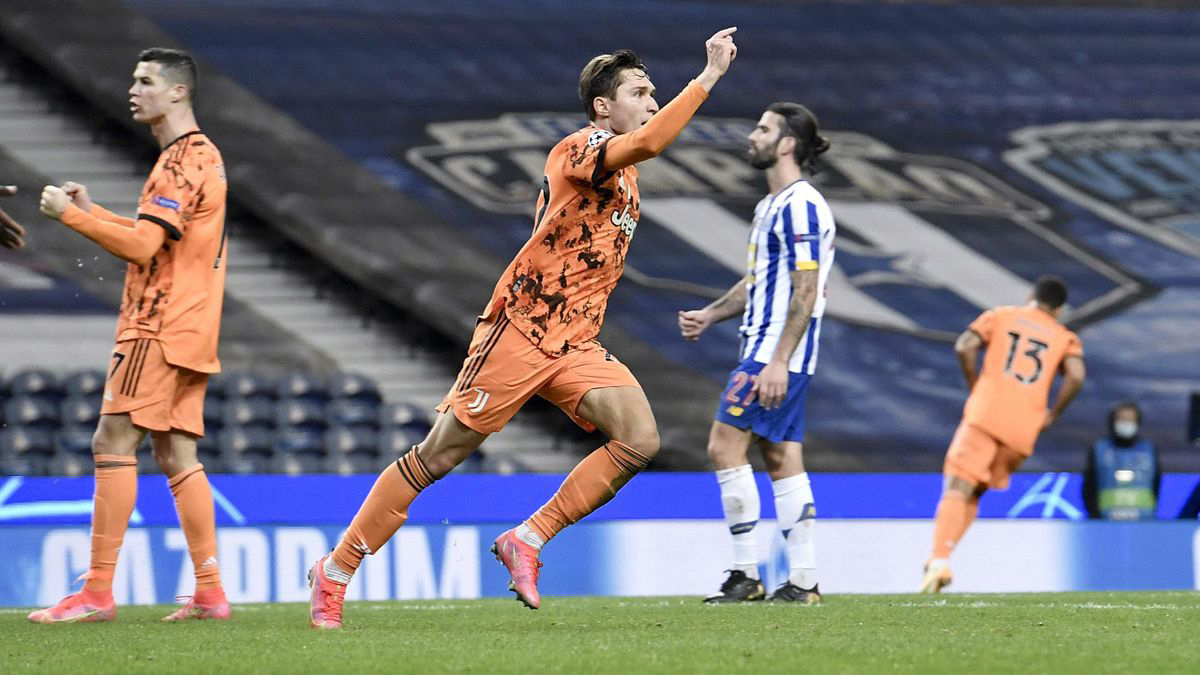 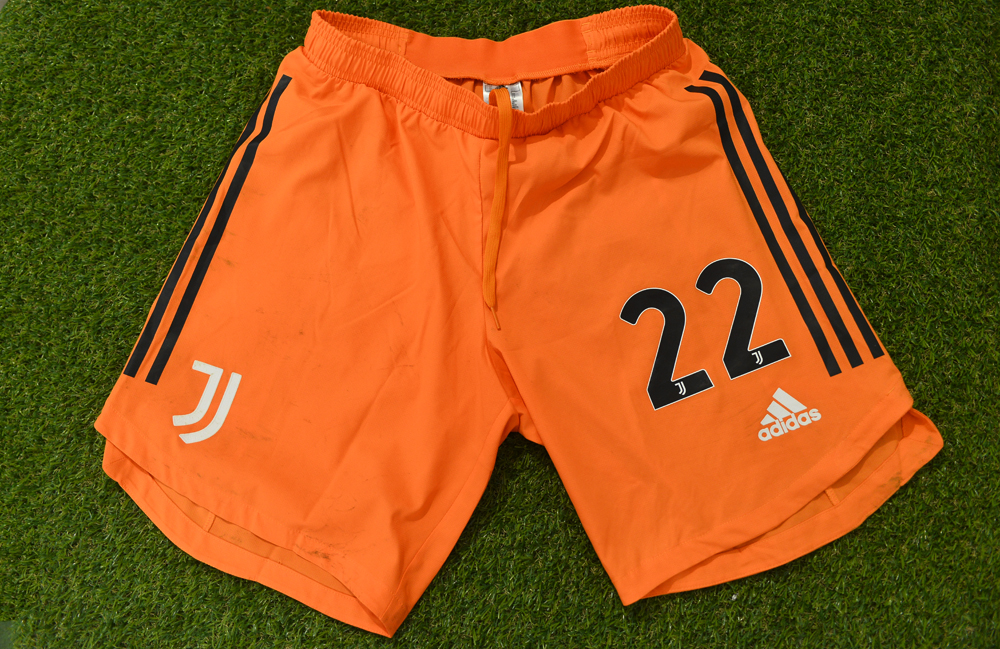 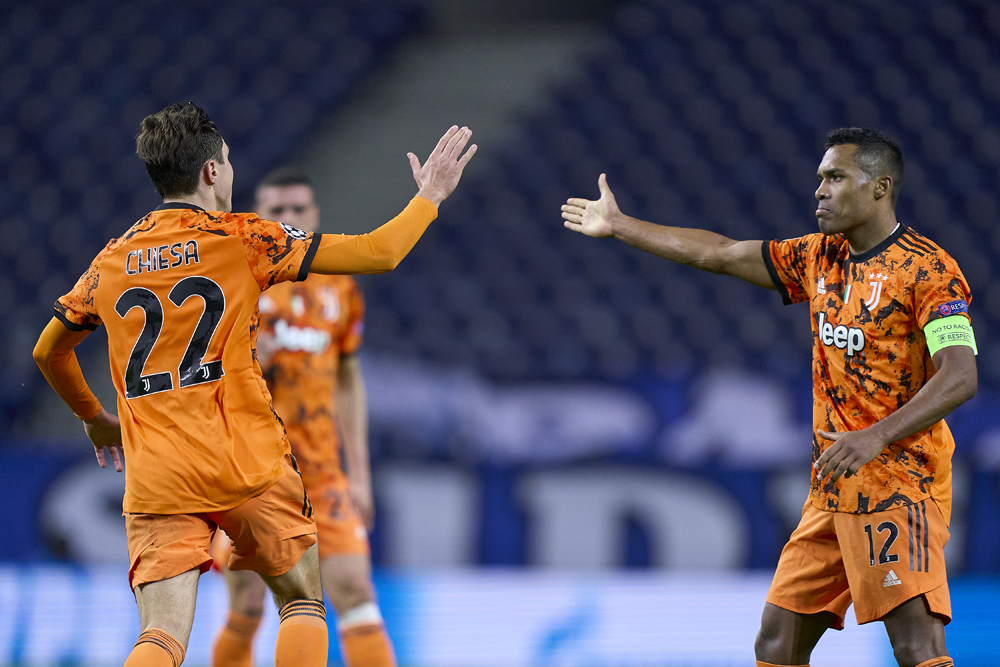 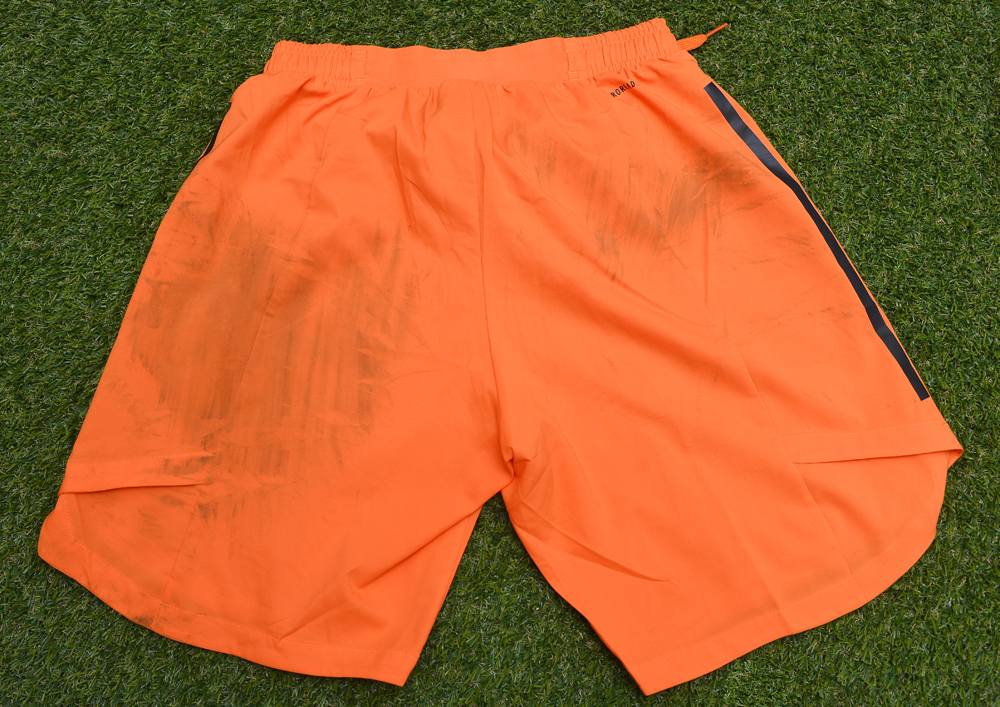 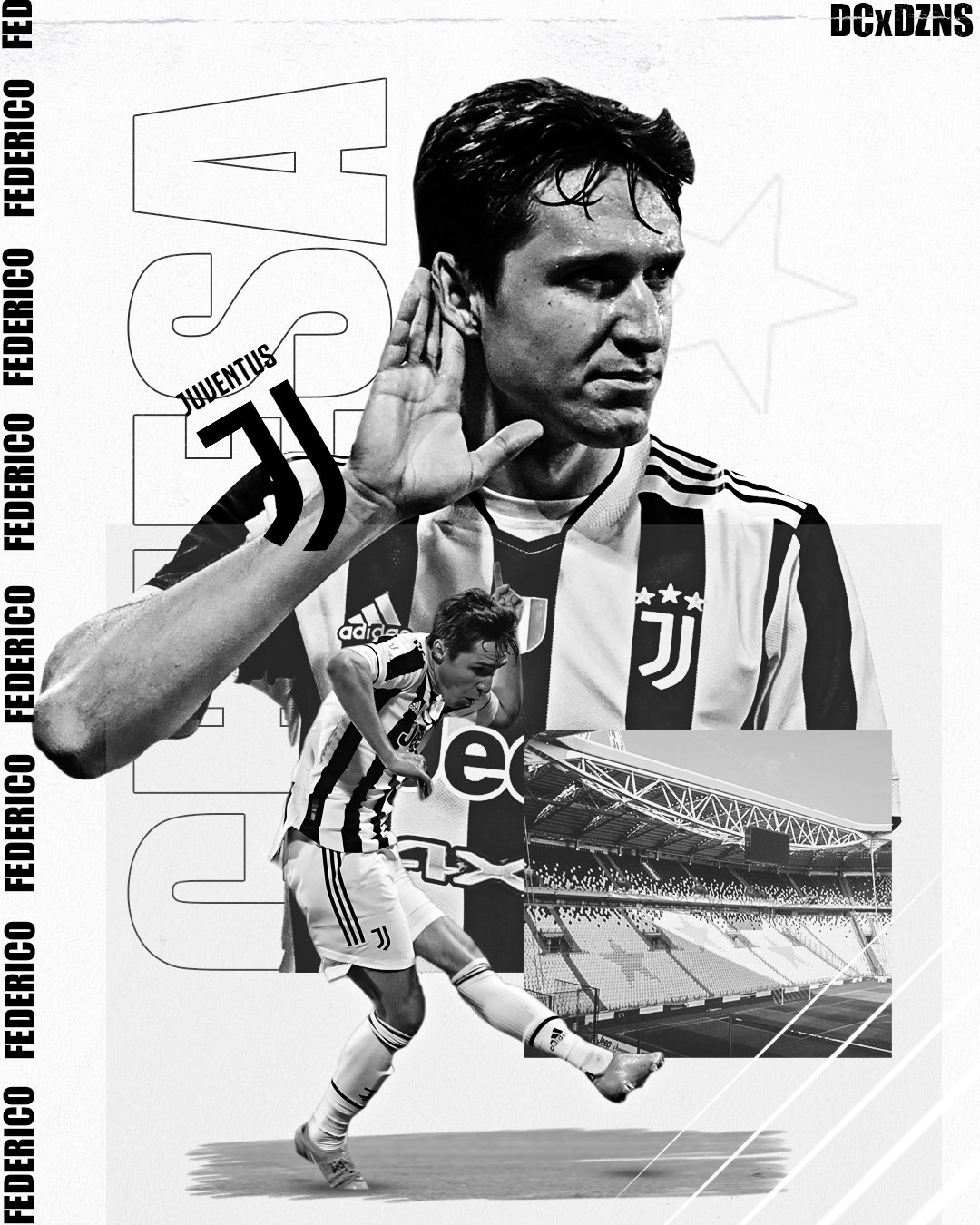 These shorts were worn by Federico Chiesa during the Champions League game between Porto and Juventus which took place in Porto, “Estadio do Dragao”, on February 17th 2021. Porto defeated Juventus 2-1. The shorts were worn in the second half so they are the shorts that he wore when he scored at minute ’82. Shorts are very dirty on the back and they have several stains on front as well, recognizable from game’s footages and pictures. On 5 October 2020, Chiesa signed a two-year loan deal with Juventus; a €3 million loan for the first season and a €7 million loan for the second season, with a conditional obligation to buy for €40 million plus €10 million in variables. On 17 October, Chiesa made his debut for Juventus, providing an assist for Álvaro Morata and getting a straight red card in a 1–1 away draw to Crotone. He made his UEFA Champions League debut three days later, in a 2–0 away win over Dynamo Kyiv. He scored his first goal in the competition, and for Juventus, on 2 December, in a 3–0 home win against the same opponent. Chiesa’s first league goal for Juventus came on 16 December, scoring a long-distance goal in a 1–1 home draw against Atalanta. On 6 January 2021, Chiesa scored a brace against league-leaders Milan to help Juventus win 3–1 away from home; it was Milan’s first league defeat in 27 games. Chiesa scored three goals against Porto in the 2020–21 UEFA Champions League round of 16: one in the first leg and two in the second leg. However, Juventus were eliminated on away goals rule. On 19 May, he scored the match–winning goal in a 2–1 victory over Atalanta in the 2021 Coppa Italia Final. At the start of the new season, on 29 September 2021, in the 2021–22 UEFA Champions League, Chiesa scored the winning goal in a 1–0 home win against title holders Chelsea in a group stage match, equalling Alessandro Del Piero’s record of four consecutive goals in the competition. On 9 January 2022, during a match against Roma, Chiesa suffered an anterior cruciate ligament injury, rulling him out for seven months. Chiesa ended his season early with four goals in 18 appearances. 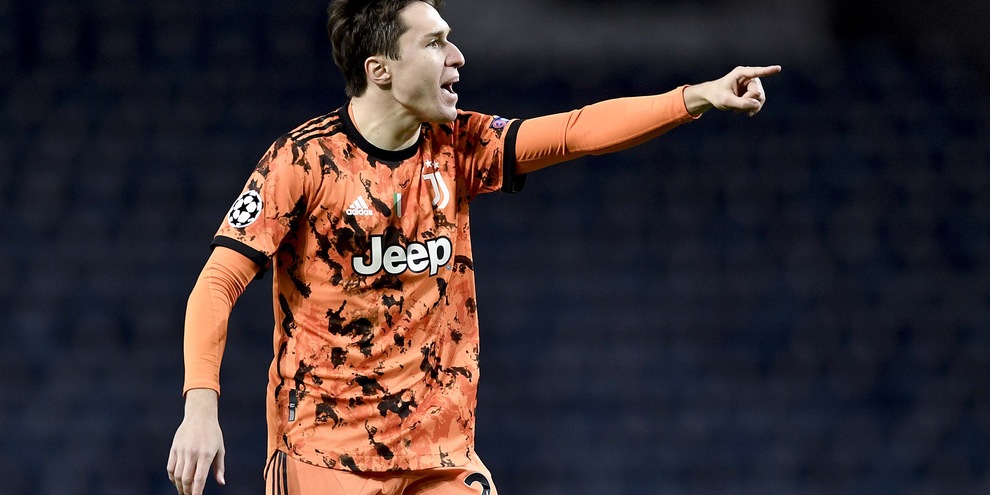 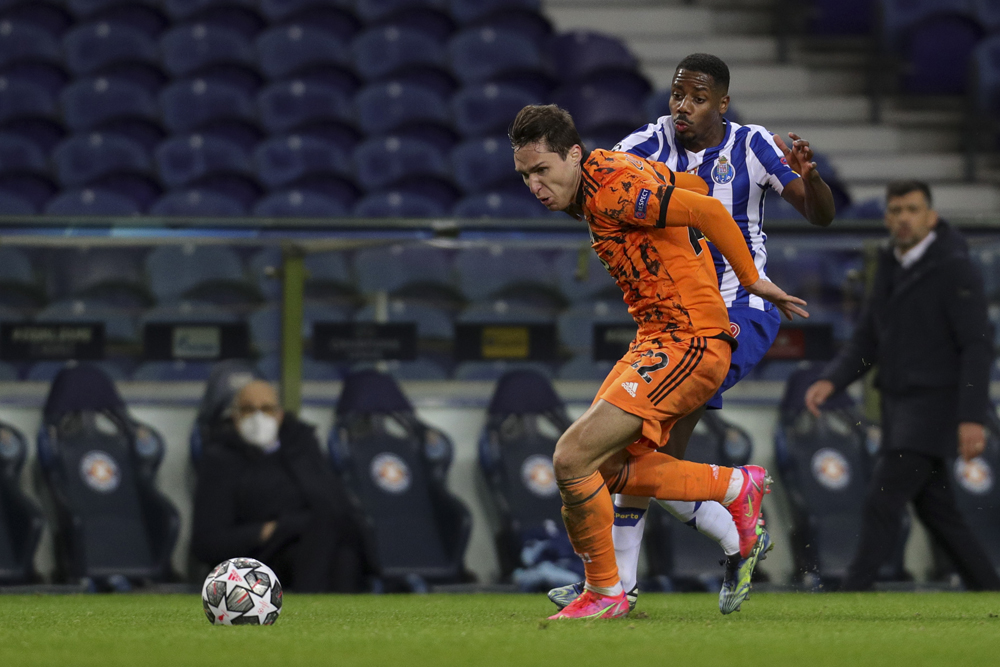 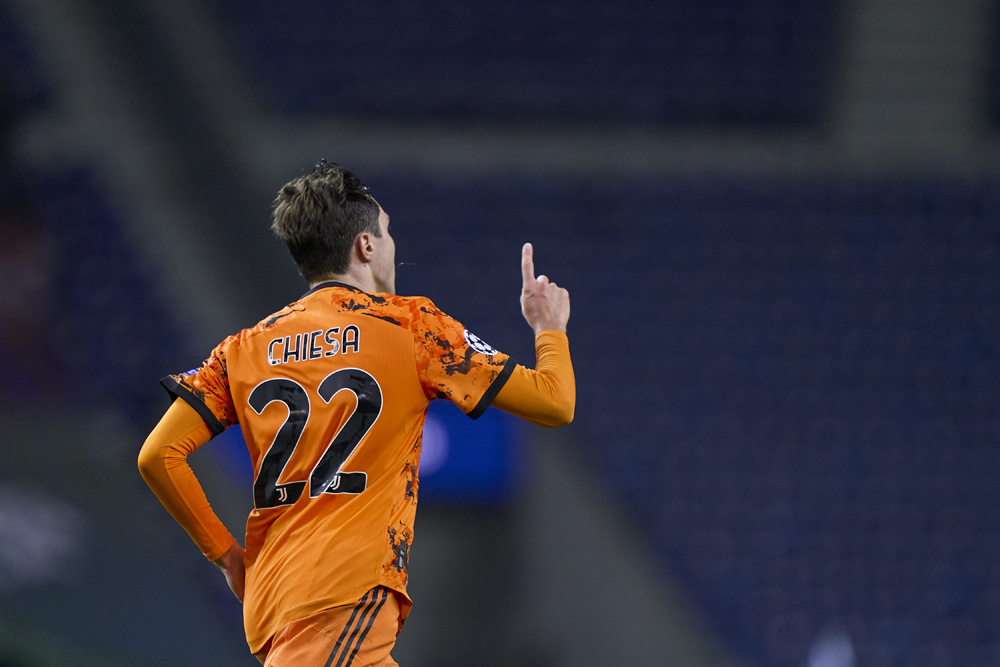 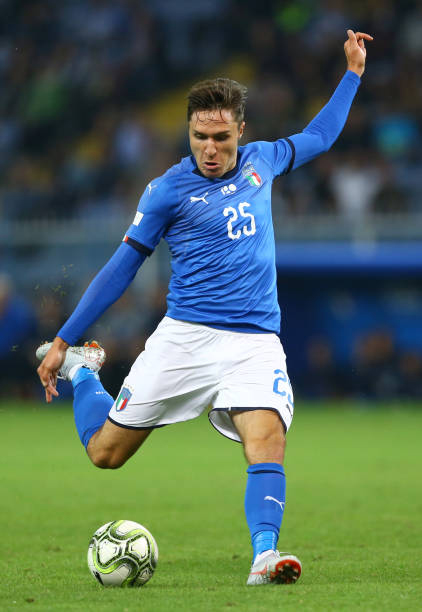 Federico Chiesa joined Fiorentina in 2007. Initially a member of their Giovanili side, Chiesa was assigned to the under-19 squad for the 2014–15 season, and scored a single goal in seven appearances for their Primavera side. The following season, he made 23 appearances and scored seven goals. Chiesa signed his first professional contract with Fiorentina in February 2016. He made his competitive debut for Fiorentina in a 2–1 away defeat against Juventus, during the opening fixture of the 2016–17 Serie A season. Fiorentina manager Paulo Sousa opted to replace him at half-time with loan signing Cristian Tello. On 29 September, Chiesa made his Europa League debut in Fiorentina’s 5–1 home win over Qarabağ. On 8 December, he marked his fourth Europa League appearance by scoring his first ever senior goal in a 1–2 away victory over Qarabağ; he was later sent off during the same match for a double booking. On 15 January 2017, Chiesa appeared to score the match-winner in a 2–1 home win over rivals Juventus, from a Milan Badelj pass; however, the goal was assigned to Badelj, as, following review, the replays did not confirm whether Chiesa had deflected the pass. Later that month, Chiesa extended his contract with Fiorentina until 30 June 2021. On 21 January, he scored his first goal in Serie A in a 3–0 away victory over Chievo. Just eight days later, Chiesa scored his second league goal in a 3–3 home draw against Genoa. On 7 May, he netted the opening goal for Fiorentina in an eventual 2–2 draw against Sassuolo; this being his third goal for the club, and his first in Serie A in nearly four months. The goal came just four minutes after teammate Nikola Kalinić’s penalty miss just after the half-hour mark. On 16 September, the following season, Chiesa marked his 30th league appearance for Fiorentina with a goal in the Derby dell’Appennino against Bologna; scoring the opener in the 51st minute of the game, in an eventual 2–1 home win. On 30 January 2019, Chiesa scored a hat-trick in the 7–1 home victory over Roma in the quarter-final match of the Coppa Italia. 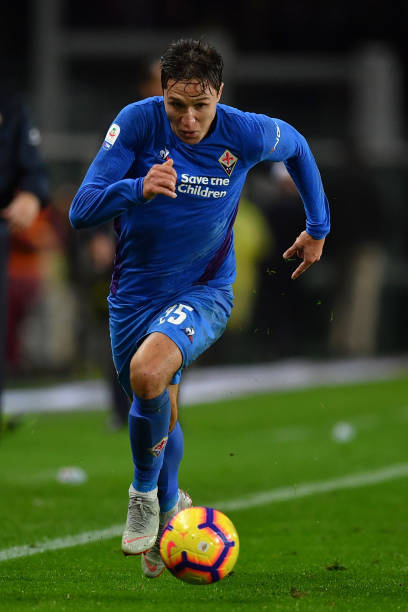 These boots were used by Federico Chiesa during the game against Cagliari which took place in Firenze on October 21st 2018. The player used the right boot with an hole in the heel probably due to an heel’s blister as you can see from the picture beside. 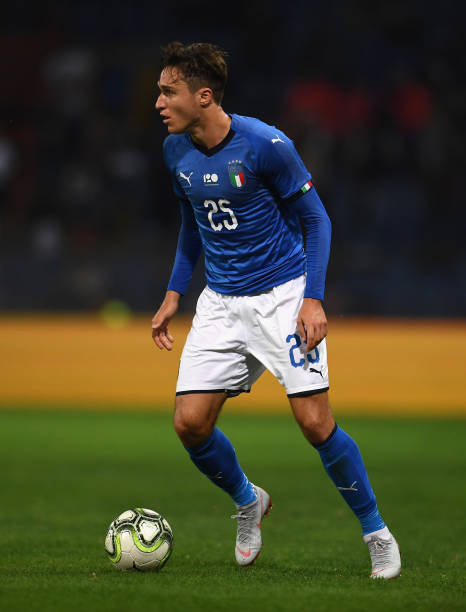 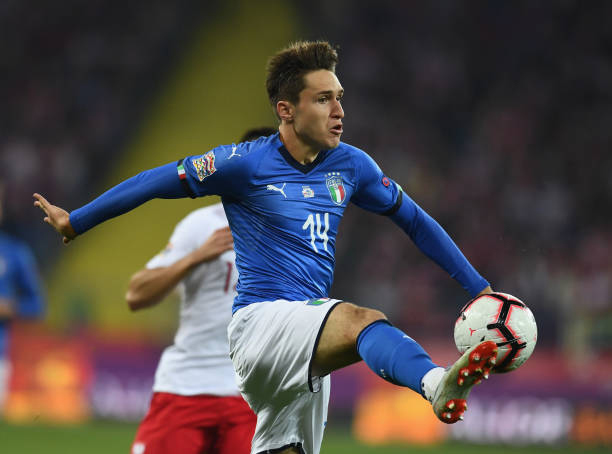 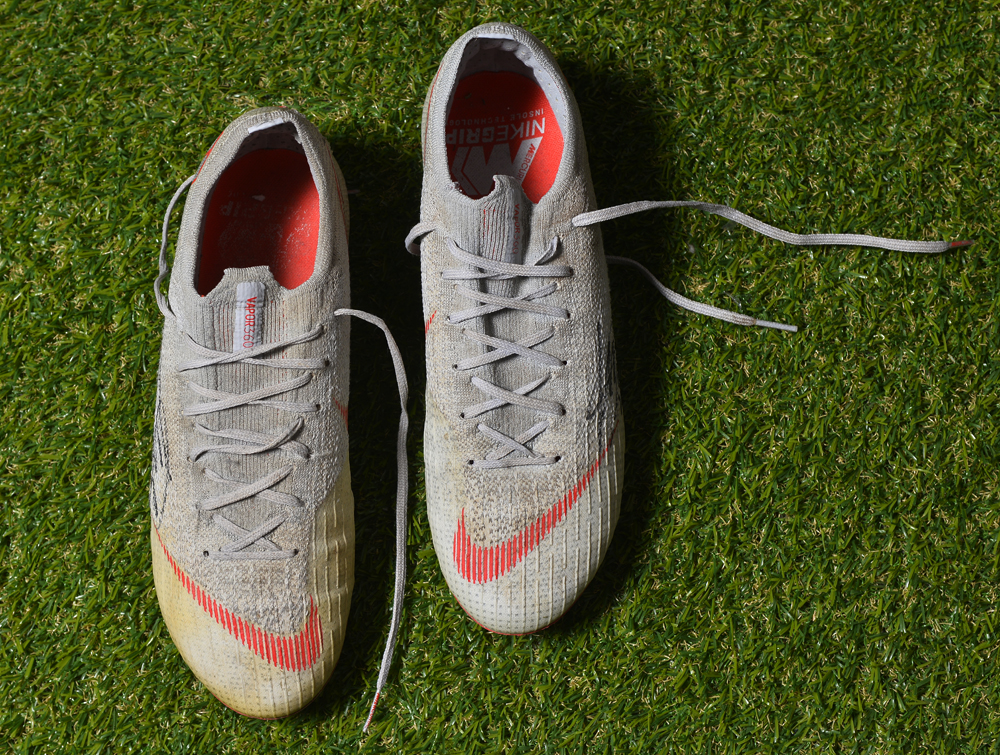 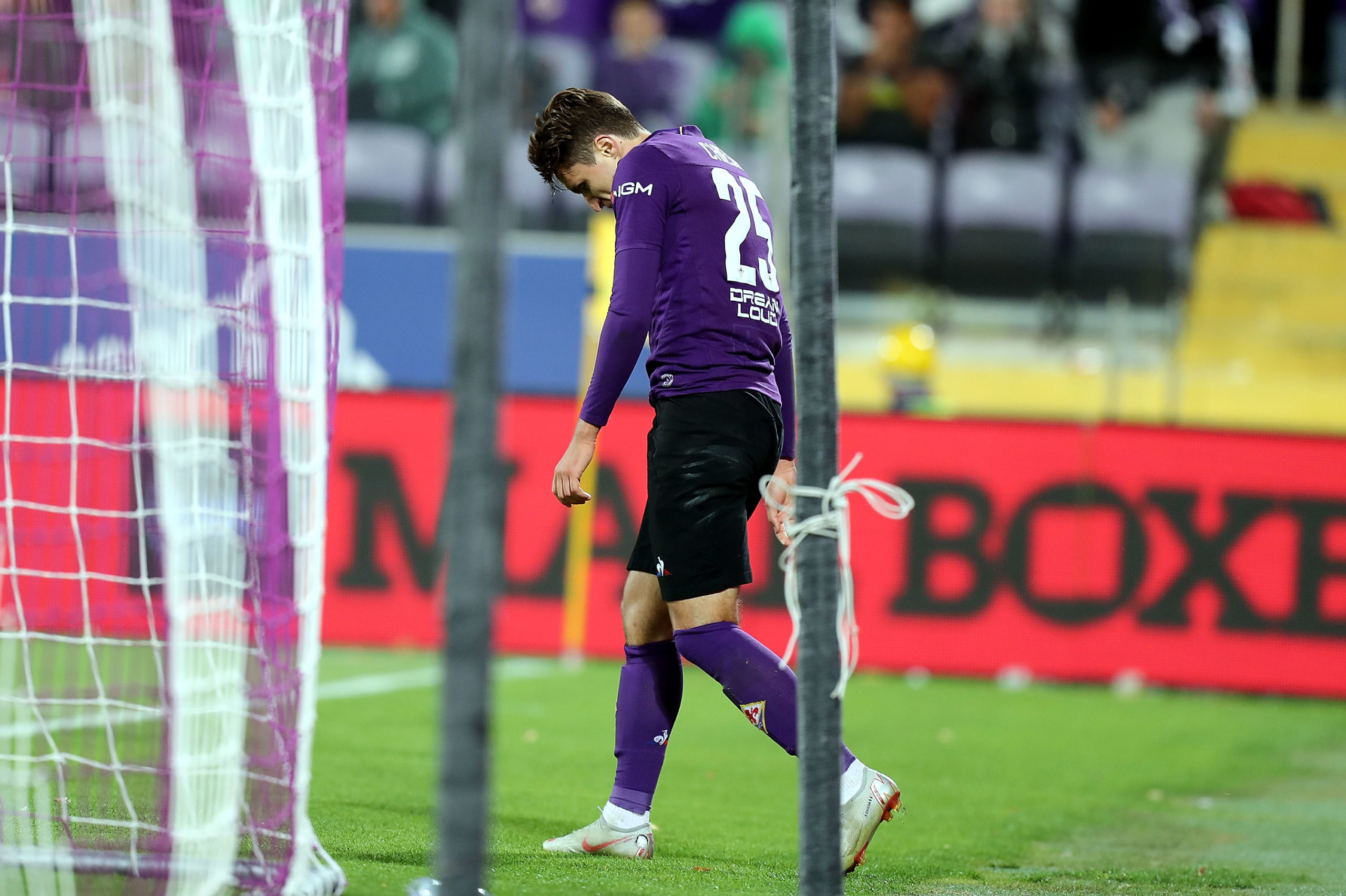 Grosso Grosso2022-09-25T12:03:48+00:00
Page load link
This site uses cookie technology, including third parties' ones. If you want to know more click here. If you access any element of this site outside this banner, you consent to the use of cookies. Ok