José Luis Félix Chilavert González is a Paraguayan former footballer who played as a goalkeeper for Sportivo Luqueño, Guaraní, San Lorenzo de Almagro, Real Zaragoza, Vélez Sarsfield, RC Strasbourg, Peñarol, and the Paraguay national football team. Chilavert won 12 club titles, including the 1994 Copa Libertadores and the 1994 Intercontinental Cup, while playing for Vélez Sarsfield, and is a three-time IFFHS World’s Best Goalkeeper award winner. An agile shot-stopper, outside of his goalkeeping position, Chilavert was also known for his skills as a free kick specialist, and often took penalties. He scored 67 goals in his professional career, many of them crucial, including eight in international matches. Four of his international goals were scored during Paraguay’s qualification for the 2002 FIFA World Cup. Chilavert is the second-highest goalscoring goalkeeper of all time, surpassed only by Brazilian keeper Rogerio Ceni, and is the only goalkeeper to score a hat-trick. Chilavert was also known for his eccentricity and his fiery temper, which brought him his fair share of controversies; most notorious among them was his being sent off in 1997 for brawling with Colombian striker Faustino Asprilla. He was nicknamed “El Buldog” (“The Bulldog”) and often wore a cartoon bulldog on his goalkeeper jersey. Chilavert appeared for the Paraguay national football team 74 times from 1989 to 2003, scoring 8 goals and representing the team at five major tournaments. Chilavert appeared for Paraguay at two FIFA World Cup tournaments (1998 and 2002), where he served as captain on both occasions, and appeared in three Copa América tournaments (1991, 1993, and 1997). Chilavert was also included in the 1998 FIFA World Cup Team of the Tournament. 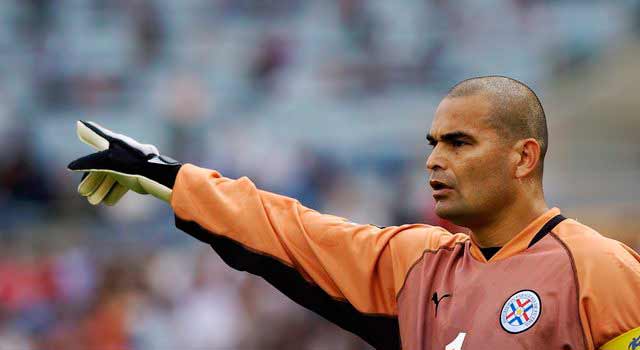 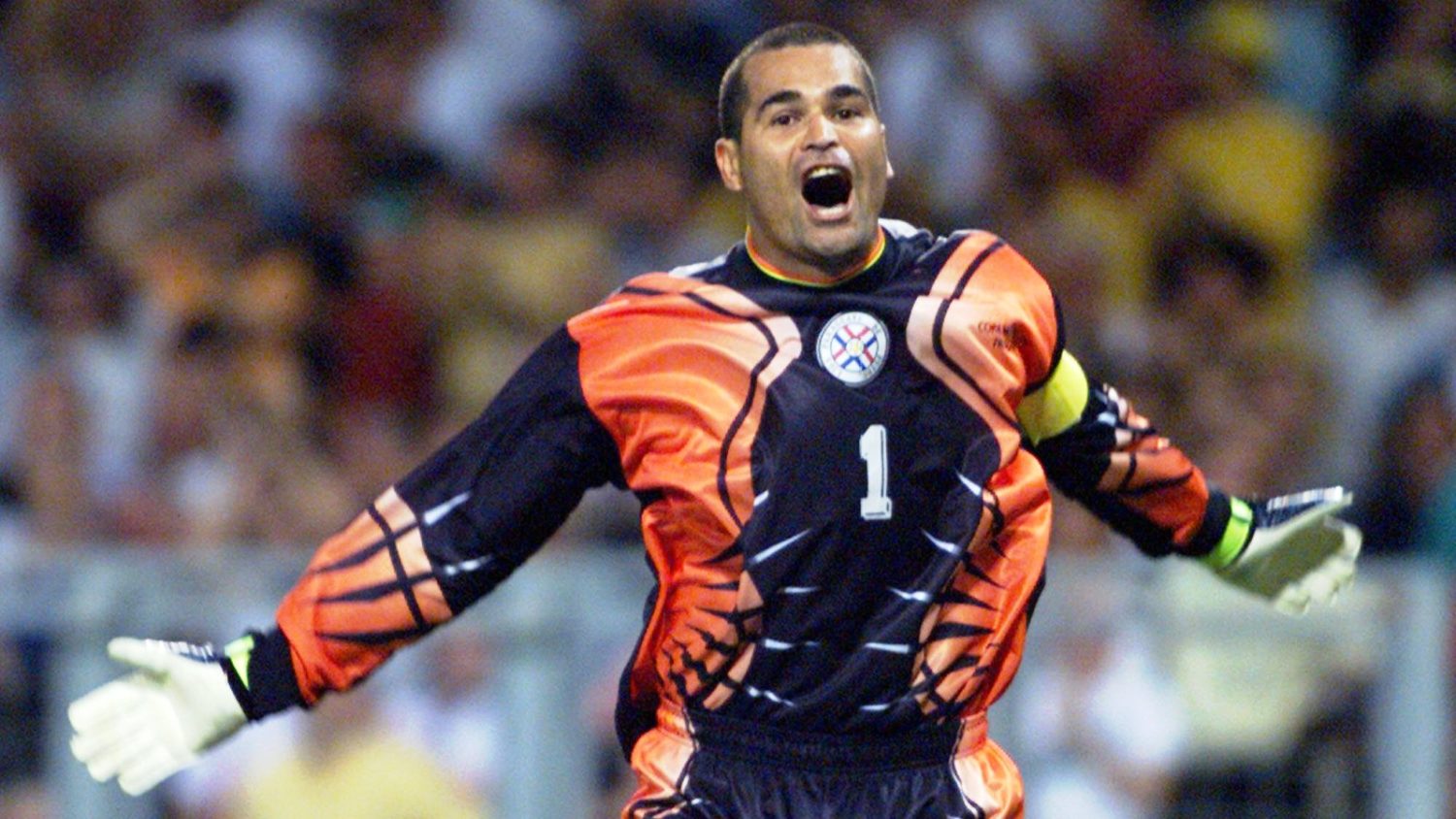 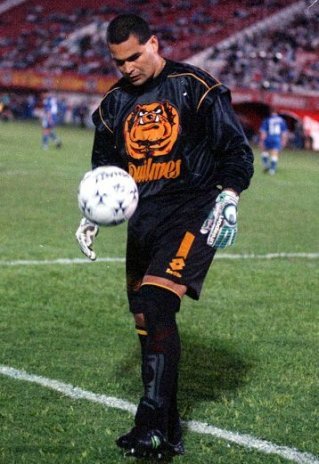 Chilavert made his debut as a football player with the team Sportivo Luqueño. He was trained by Modesto Sandoval. In 1989, he played for the Paraguayan national team for the first time. He later moved to Spain, where he played for Real Zaragoza. In 1988, whilst Chilavert played for Real Zaragoza, he stated that “the fans used to freak out” when he would come out with the ball at his feet and “scream at me to get back in goal. I’ve never stopped to think about what others are saying. I just rely on my abilities. Later on, I started to practice penalties and free kicks until they gave me the job for real”. Chilavert admitted to staying behind after training to practice 80 to 120 free kicks, which in his opinion was how he got better. After his time at Real Zaragoza, he moved to Argentina, where he played with Vélez Sársfield, helping them win the Primera División four times, as well as the Copa Libertadores and the Intercontinental Cup, both in 1994. In 1999, he became the first goalkeeper known to score a hat-trick in the history of professional football, while playing for Vélez against Ferro Carril Oeste, scoring all three goals through penalties. He also scored a free kick from behind the half-way line against River Plate. Whilst at Strasbourg, Chilavert played in the 2001 Coupe de France Final, in which his team beat Amiens SC on penalties, and Chilavert scored the winning penalty in the shootout. 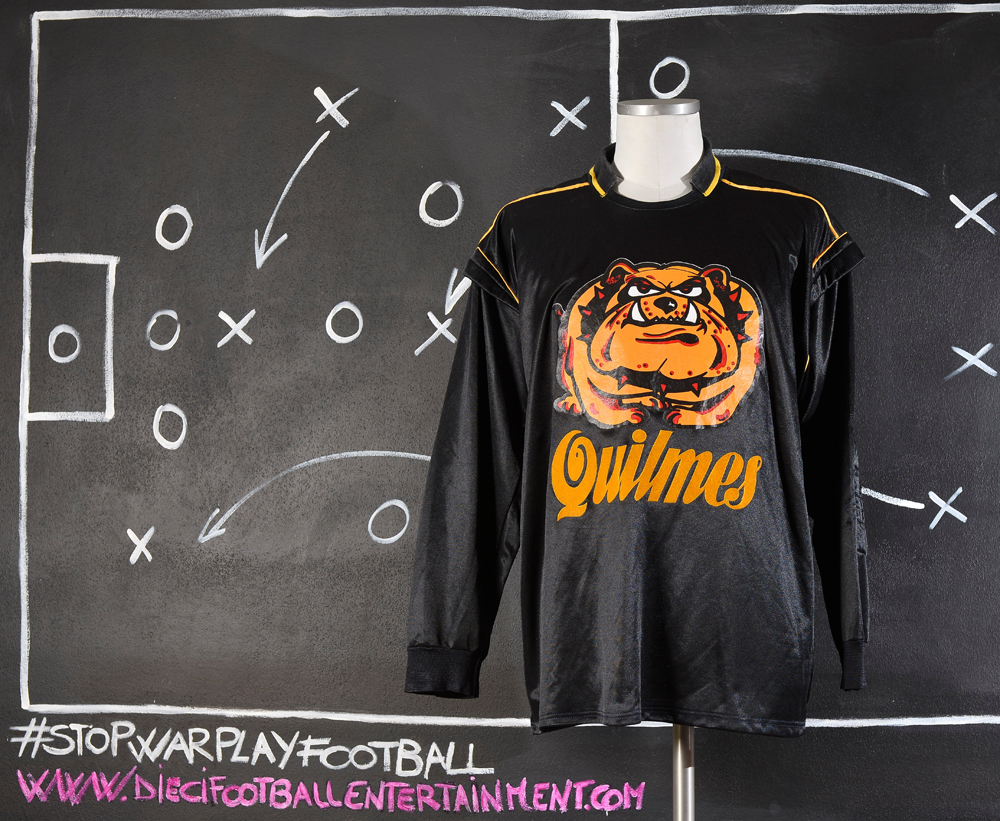 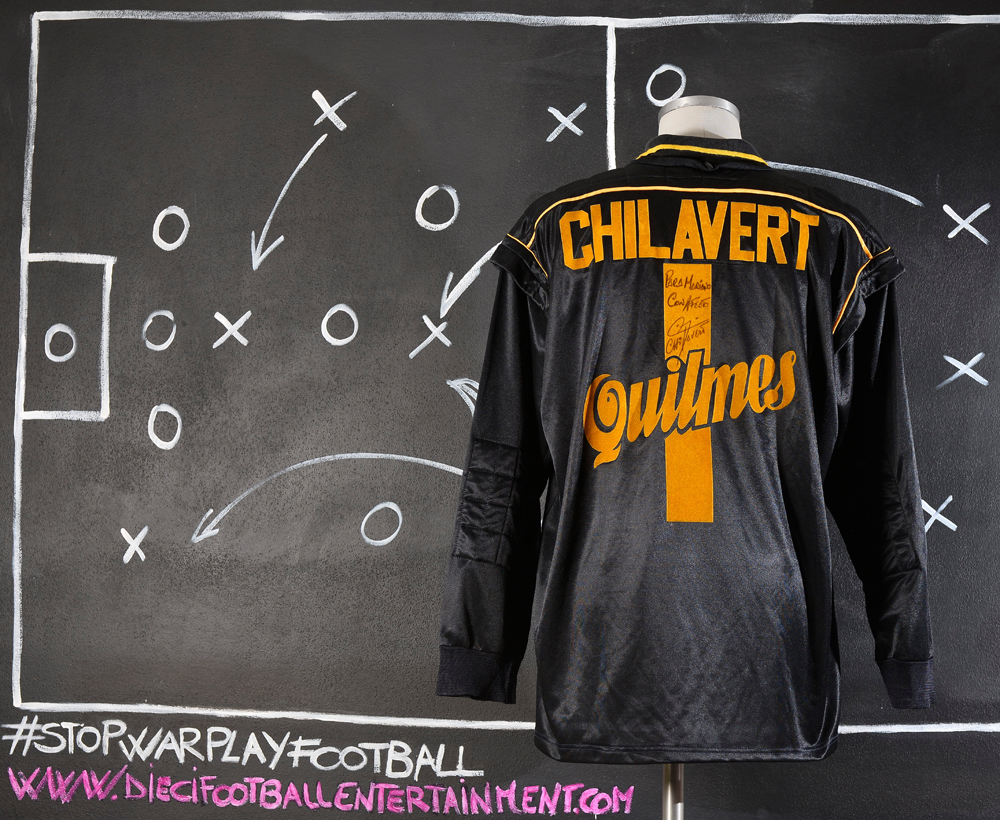 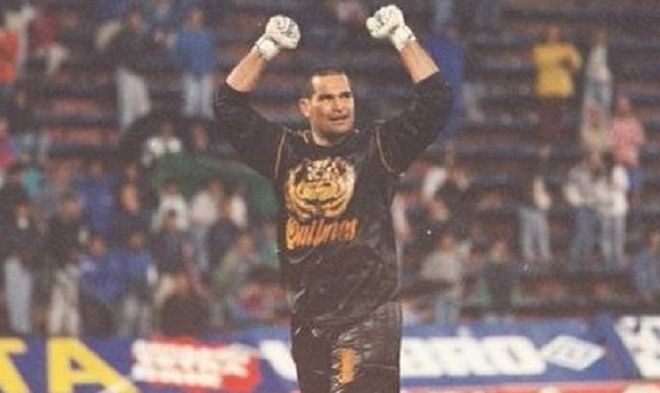 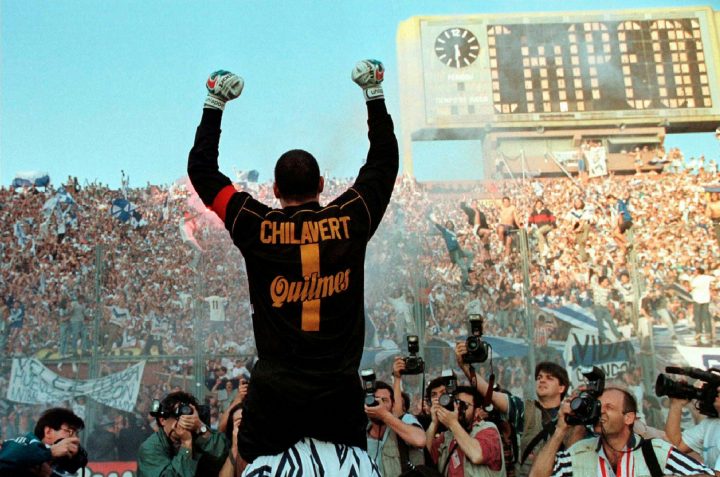 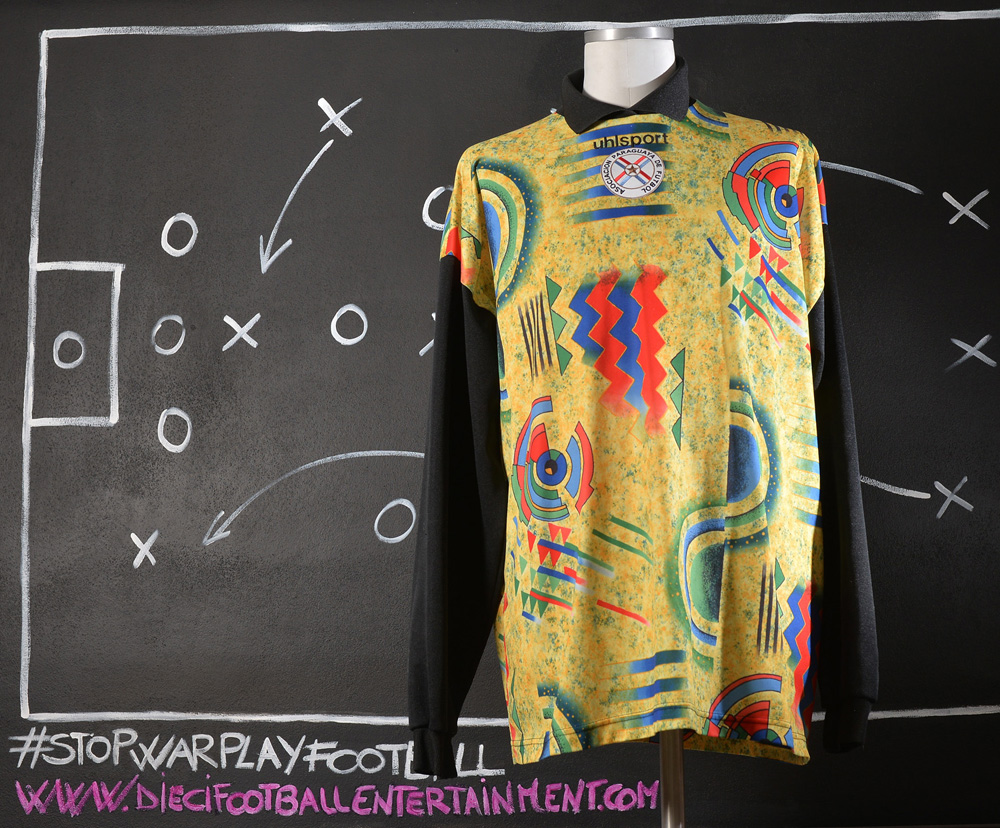 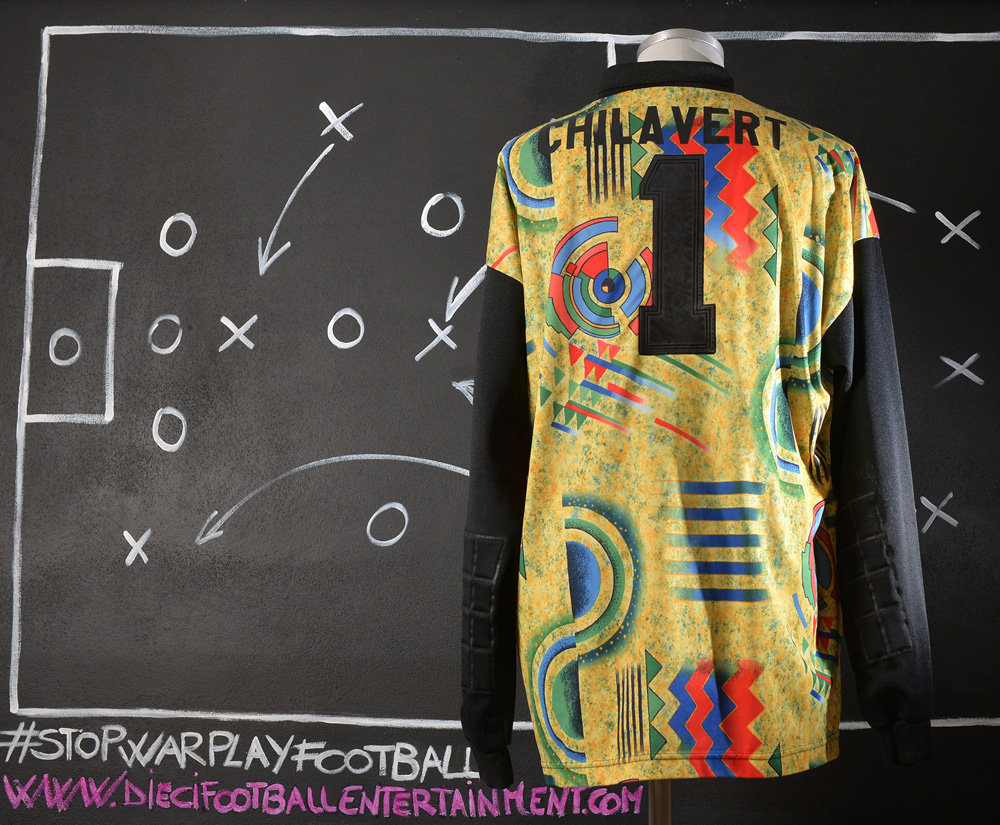 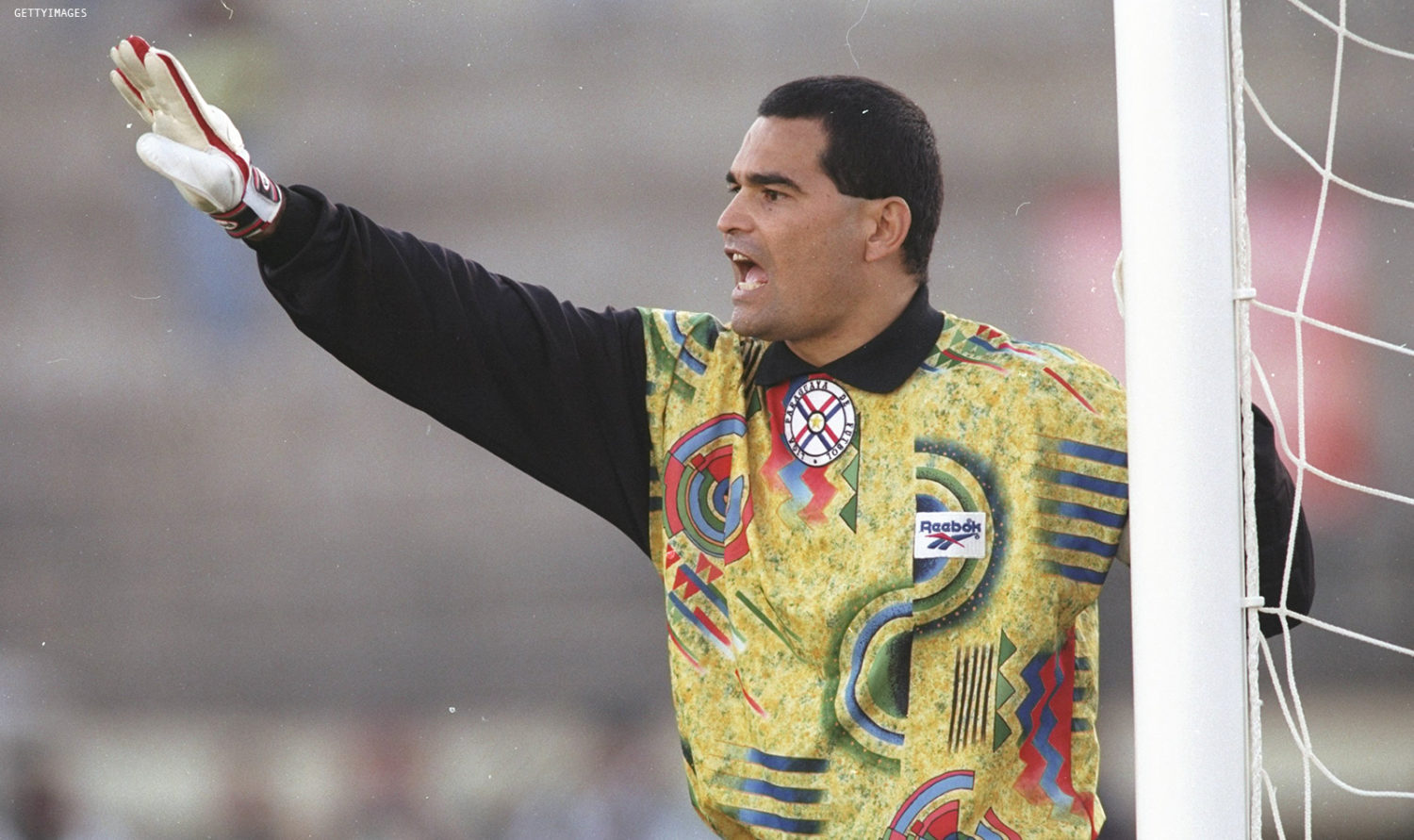 Chilavert was voted World Goalkeeper of the Year by the IFFHS in 1995, 1997, and 1998. He scored in the 1998 World Cup qualification campaign. He participated in the 1998 World Cup, where he became the first goalkeeper ever to take a direct free kick in the World Cup finals, almost scoring against Bulgaria. With two clean sheets in the first round, he helped take Paraguay to the round of sixteen, where the team lost to France on a golden goal scored by Laurent Blanc. Chilavert had made boasts about being the Cup’s best goalkeeper before the tournament, and after the tournament, FIFA indeed named Chilavert on the tournament All-Star Squad for his performances, alongside French goalkeeper Fabien Barthez. Chilavert refused to take part in the 1999 Copa América, angering the Paraguayan government, as he claimed funding should be used for education. After a 2002 FIFA World Cup qualification game, he spat on Brazil’s Roberto Carlos, an action which caused FIFA to give him a four-match suspension (later reduced to three) which forced him to watch the first game, against South Africa, of the 2002 World Cup from the stands. Chilavert accused Roberto Carlos of racism and of making obscene gestures during the match. Chilavert later claimed that Roberto Carlos came up to him after the match and said “Indian, we have won 2–0, you are a disaster”. He also justified his action by saying he had been provoked by the Brazilians, who had called him the weakest link of Paraguay before the match, and also claimed the match was like a war and that Brazil should return land to Paraguay lost in the War of the Triple Alliance in the 19th century. Before the 2002 FIFA World Cup, Paraguay manager Cesare Maldini had faced criticism in Paraguay, but Chilavert defended Maldini for his experience. He also expressed great confidence in the ability of the Paraguayan team and downplayed his role on the team. During the World Cup, Chilavert made an error against Spain on Morientes’s 2–1 goal as Paraguay lost 3–1. Chilavert almost redeemed himself later with a good free kick attempt, but the shot was saved by Casillas. Before the match, Chilavert had vowed to score against Spain if Paraguay got a free kick “within range”. Before the last match in the group stage, Paraguay had to beat Slovenia and Spain had to beat South Africa, with a combined margin of three goals, for Paraguay to go through to the last 16. The match started badly for Paraguay, with Carlos Paredes sent off in the 21st minute, and continued with Milenko Ačimovič taking the lead for the Slovenians right before half-time. But Paraguay – inspired by substitutes Nelson Cuevas and Jorge Campos – recovered to defeat Slovenia 3–1, scoring three times in the last 25 minutes, and when Spain also defeated South Africa 3–2, that victory meant that Paraguay was through to the next round, where they would play Germany. In their second-round match against Germany, despite several saves from Chilavert, Paraguay lost 1–0, courtesy of a late Oliver Neuville goal. In total, Chilavert earned 74 international caps for Paraguay and achieved a goalkeeper record of eight international goals. He retired from international football in 2003. 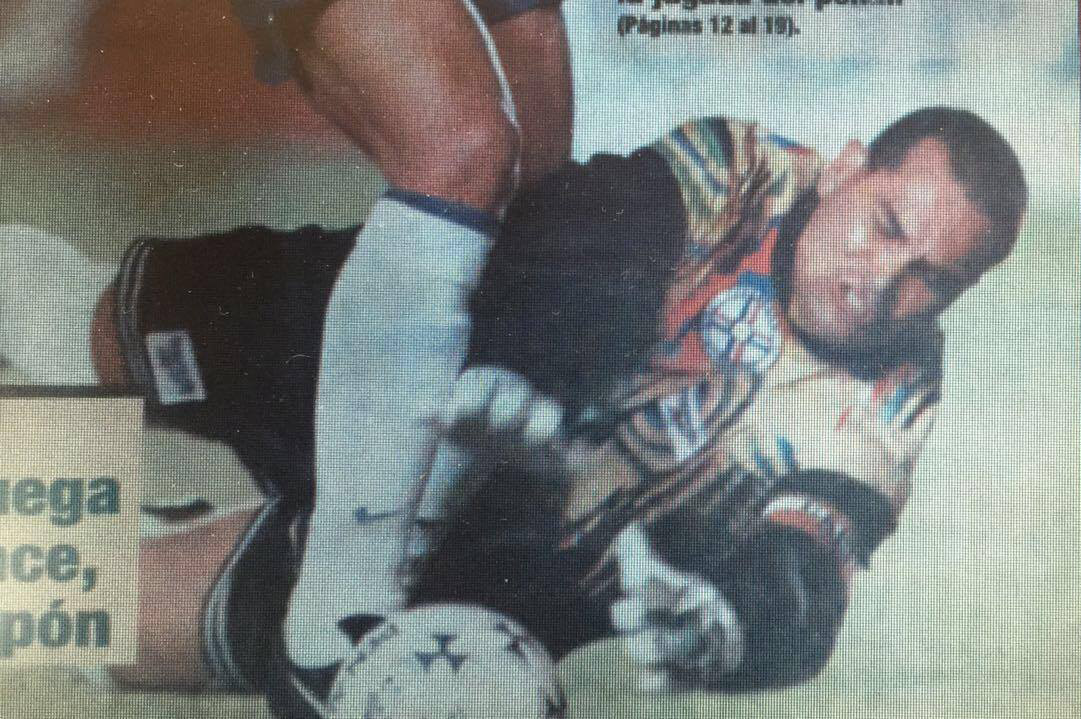 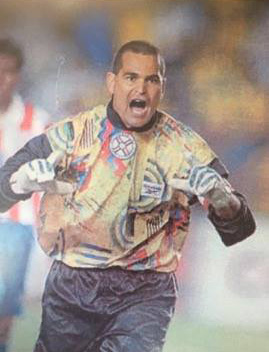 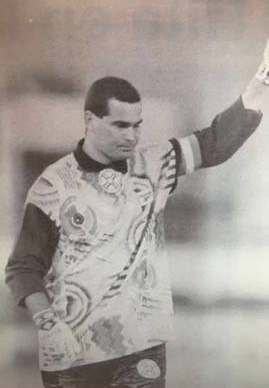 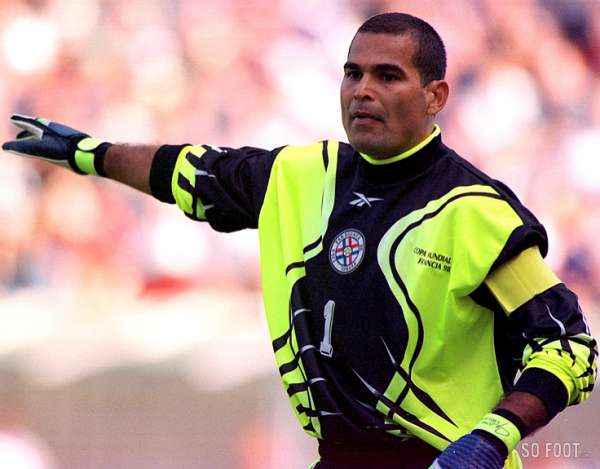 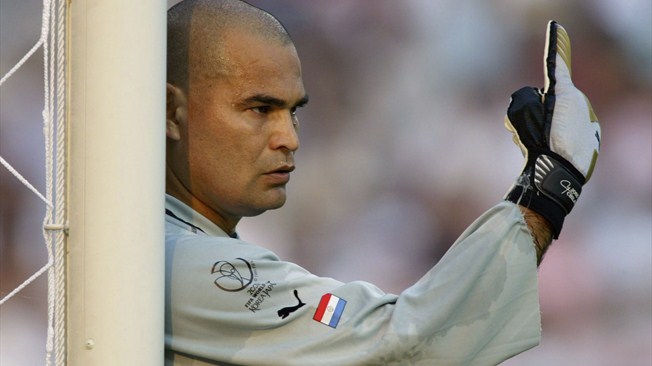 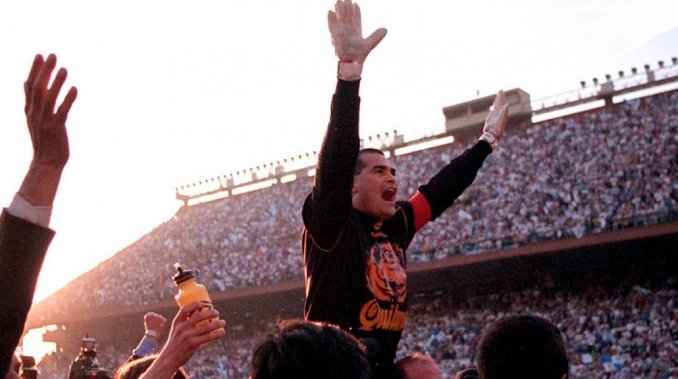 Watch above the best Chilavert saves and goals 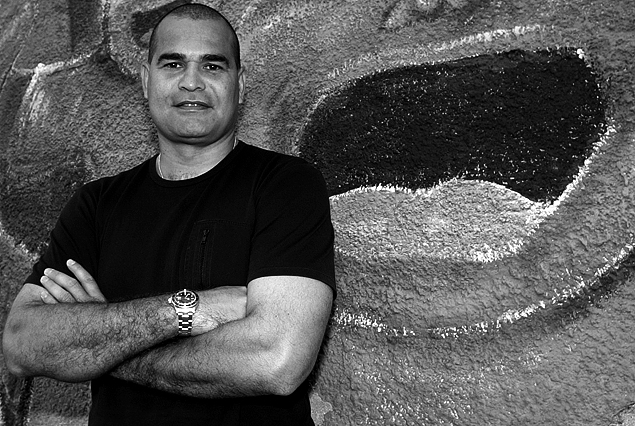 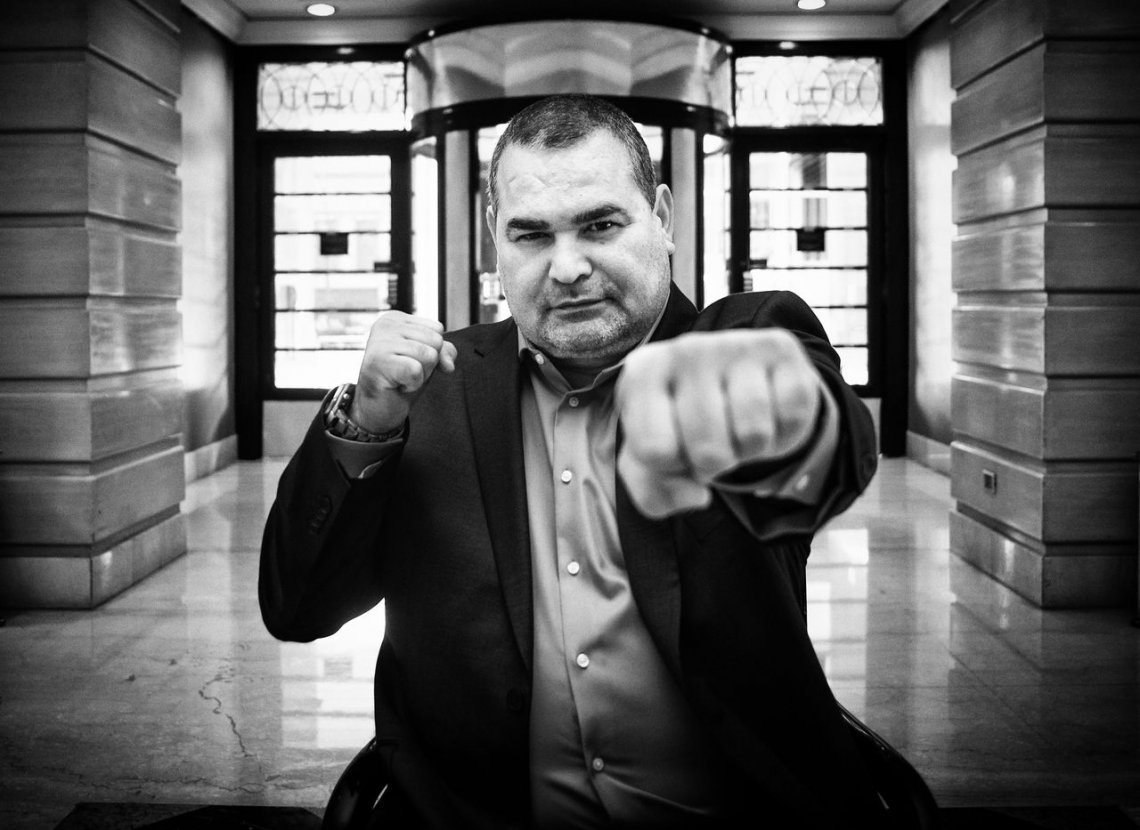 Chilavert has allegedly thrown punches at Faustino Asprilla and Diego Maradona. He once received a suspended prison sentence for attacking a physiotherapist. Chilavert was a guest commentator for Univision during the Copa América Centenario but was removed from the broadcasts after CONMEBOL President Alejandro Dominguez told the network to remove Chilavert. Chilavert had criticized Dominguez and called him corrupt on the air during Paraguay’s Group A match against Colombia. Chilavert defended Cesare Maldini from the members of the Paraguayan press who criticized Maldini when he was appointed as Paraguay’s coach for the 2002 FIFA World Cup. Chilavert stated that “About 90% of sports journalists in Paraguay are incompetent” and welcomed criticism following Paraguay’s performance in Korea and Japan if they were to perform poorly. During his career, Chilavert was being touted as Paraguay’s future president. Chilavert was labelled “a revolutionary the kind of which South America has not seen since the days of Che Guevara.” Off the field, Chilavert refused to participate at the 1999 Copa América, held in Paraguay, complaining about the incompetence of the local directors. Despite being officially honored by the government, he said that his country should invest money in education rather than football. Chilavert also routinely dismissed his country’s politicians as corrupt, incompetent, and responsible for keeping many Paraguayans in poverty. Chilavert claimed that when his playing days were over, he would stand for president and enforce his own brand of law and order.During 2008 and 2009, the former goal keeper demonstrated his support for Paraguayan Olympic thrower Edgar Baumann against corruption in Paraguayan sport when the athlete had been robbed of his right to compete at the 2000 Sydney Olympics due to a scandal from the Paraguayan Olympic Committee. Chilavert supported Baumann during the lawsuit which had been filed against the Olympic Committee with Chilavert stated that the then president of the Olympic Committee, Ramón Zubizarreta, should be expulsed for hurting athletes and not giving them benefits. In 2009, Chilavert, along with Claudio Escauriza, Tomás Orué and lawyer Alejandro Rubin, attended a Press Conference at Asunción Shopping Centre Shopping del Sol, in support Edgar Baumann, who had received a favorable ruling from the Paraguay Supreme Court in a case against the Paraguay Olympic Committee president Ramón Zubizarreta for robbing him the right of competing at the 2000 Summer Olympics and also taking his sums of money that he earned from his scholarship.

Grosso Grosso2018-02-27T12:43:57+00:00
Page load link
This site uses cookie technology, including third parties' ones. If you want to know more click here. If you access any element of this site outside this banner, you consent to the use of cookies. Ok
Go to Top