Roberto Donadoni is an Italian former midfielder. A complete, versatile, and hard-working winger, known for his pace, stamina, offensive capabilities, distribution, and technical skills, he was capable of playing on either flank, or even in the centre. Donadoni began his career with Atalanta, and he later became a pillar of the powerhouse A.C. Milan team of the late 1980s and early 1990s, achieving notable domestic and international success during his time with the club. In his later career, he was also one of the pioneers of Major League Soccer, where he played two seasons for the NY/NJ MetroStars, ending his career with Saudi Premier League side Ittihad in 2000. At international level, Donadoni was also an important member of the Italy national team throughout the late 80s and early 90s; he represented his country at the 1988 and 1996 European Championships, and at the 1990 and 1994 FIFA World Cups. With Italy, he reached the semi-finals of Euro 1988, and won bronze and silver medals at the 1990 and 1994 World Cups respectively. Following his playing career, Donadoni began a career as a manager in 2001, which included spells with Italian clubs Lecco, Livorno, and Genoa. He was later appointed head coach of the Italian national team, succeeding Marcello Lippi, who resigned after having won the 2006 FIFA World Cup. At the Euro 2008 campaign, with Donadoni as coach, Italy reached the quarter-finals of the tournament, losing to eventual champions Spain on penalties. On 26 June 2008, Donadoni was subsequently dismissed despite having signed a contract extension prior to the beginning of Euro 2008, using a clause in the contract which allowed termination if Italy did not reach the semi-final. He was replaced by Marcello Lippi who returned as national team manager. 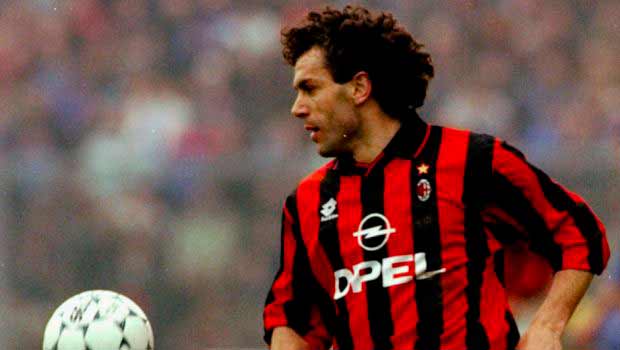 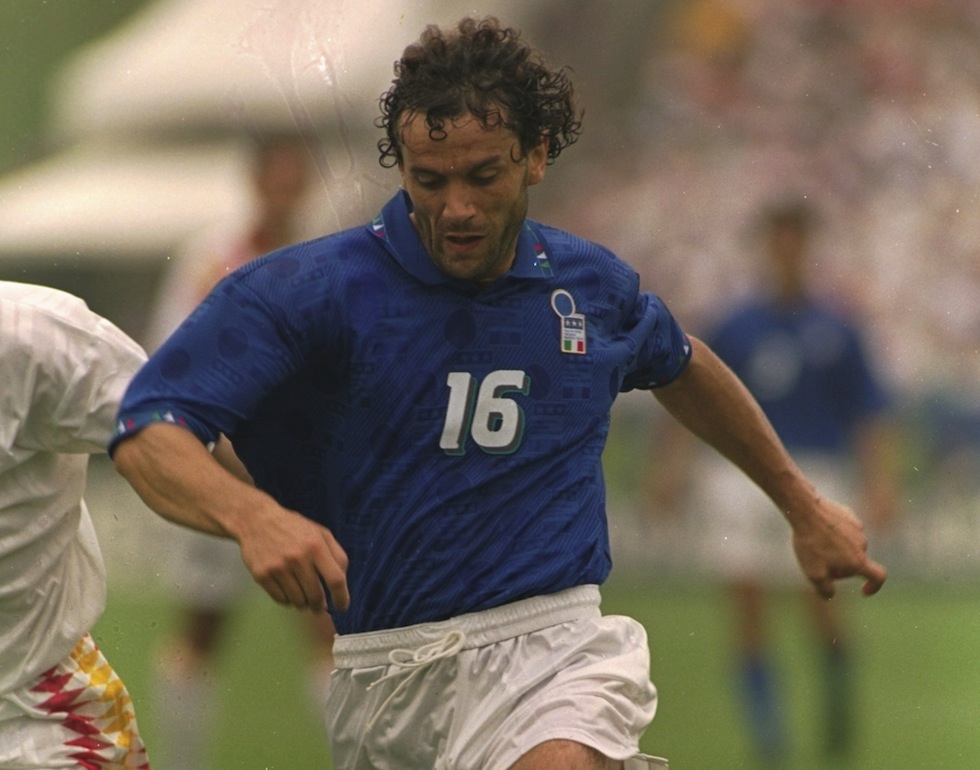 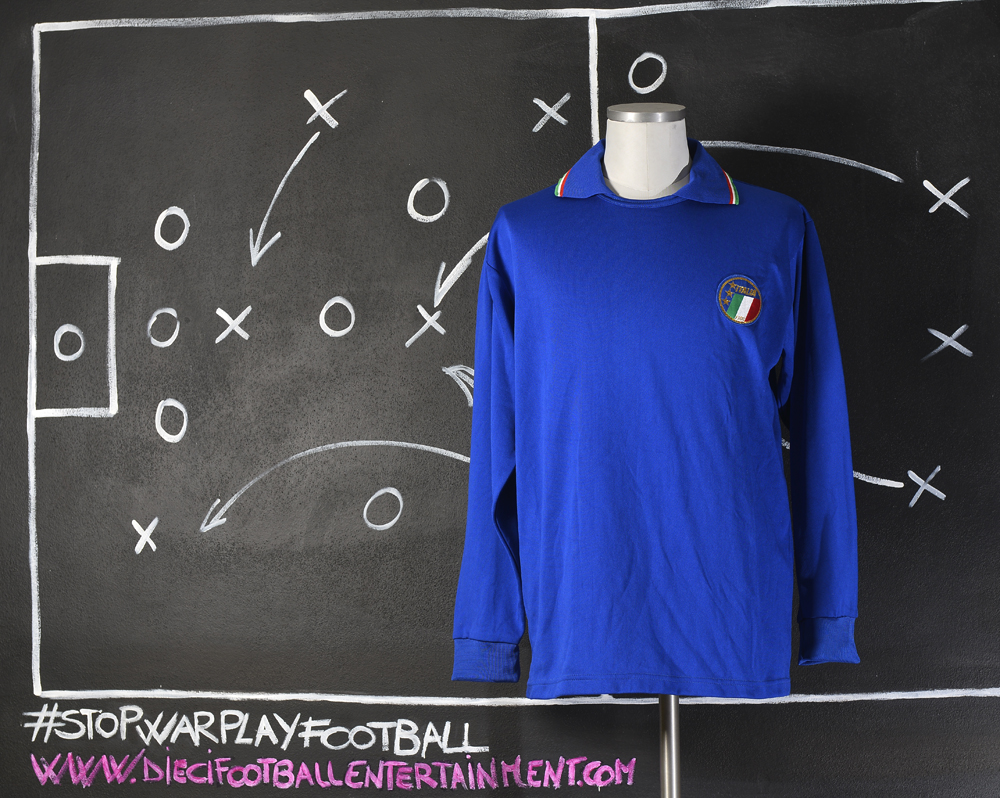 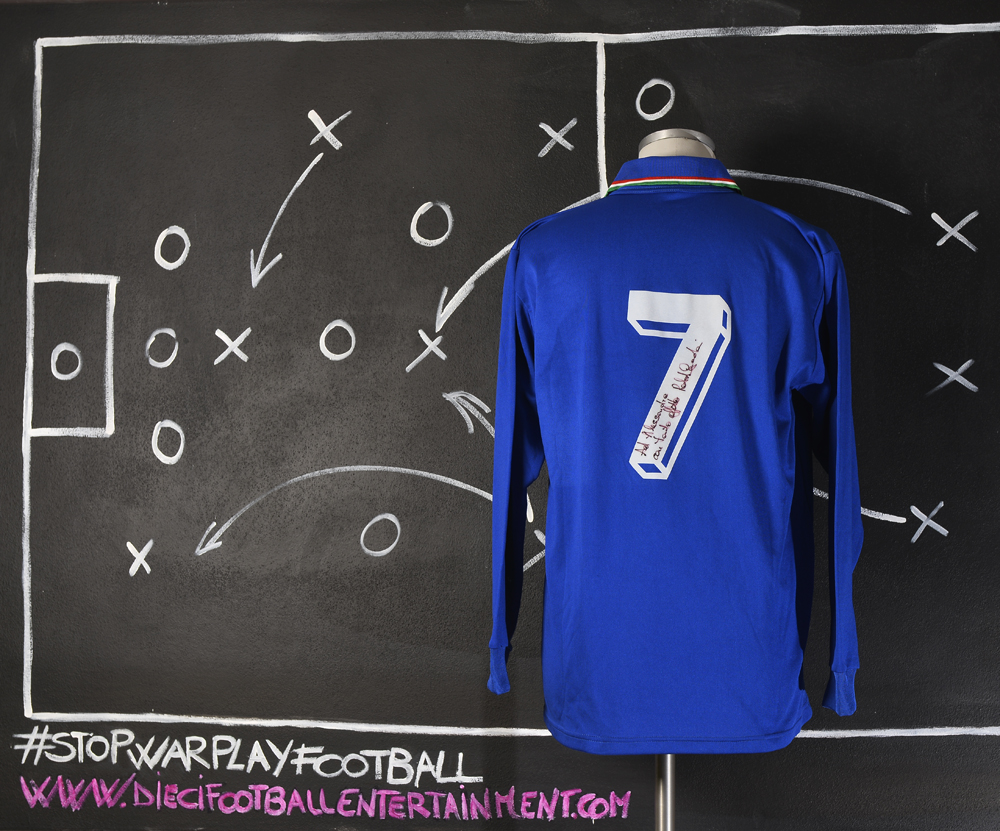 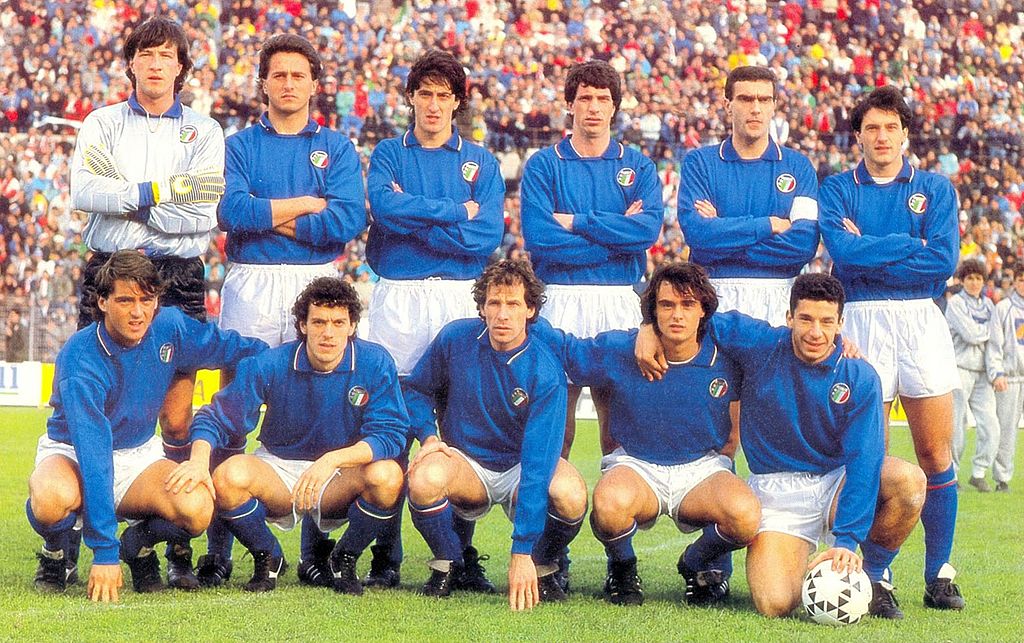 A member of the Italy under-21 national football team, reaching the final of the 1986 UEFA European Under-21 Championship, Donadoni made his Italy national team senior debut on 8 October 1986, under Azeglio Vicini in a 2–0 victory over Greece. He soon became a key member of his national side, reaching the semi-finals of Euro 1988, and he subsequently played in the 1990 FIFA World Cup, on home soil, helping Italy to a third place finish. Unfortunately, he missed one of the penalties in the fateful semi-final shoot-out against defending champions and eventual runners-up Argentina. Overall, he made five appearances throughout the tournament, missing out on the round of 16 victory against Uruguay due to injury, and the bronze medal match victory against England. Donadoni also took part at the 1994 World Cup, under Arrigo Sacchi, helping Italy to a second-place finish, where Italy would once again be defeated on penalties, by Brazil. However, on this occasion Donadoni did not take a penalty in the final shoot-out. En-route to the final, he set up Dino Baggio’s goal in Italy’s 2–1 quarter-final victory over Spain, and also provided the throw-in on the left flank from which Roberto Baggio scored his first goal in Italy’s 2–1 over Bulgaria in the semi-finals of the tournament. He also represented Italy at Euro 1996, which would be his final international tournament prior to his international retirement, appearing in all three group matches. His final appearance for Italy was on 19 June 1996, in the final group match, which ended in a 0–0 draw against the eventual champions Germany, eliminating the Italians in the first round of the tournament. Overall, Donadoni made 63 appearances for Italy, scoring five goals. 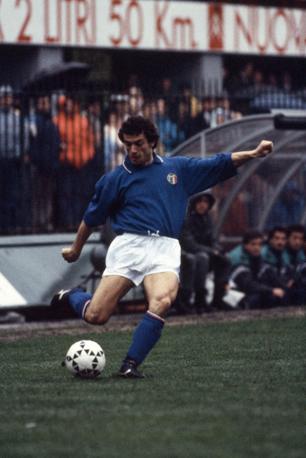 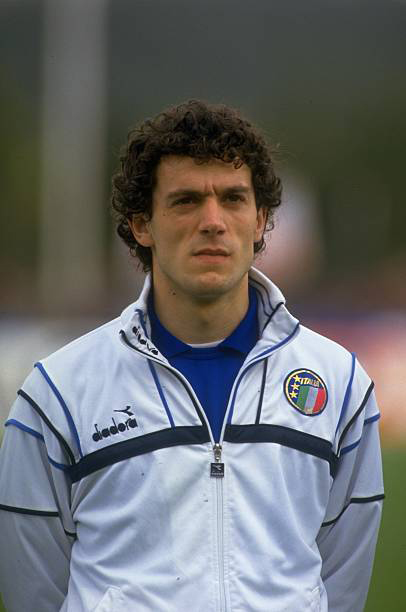 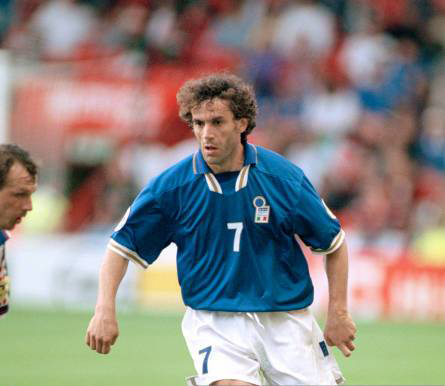 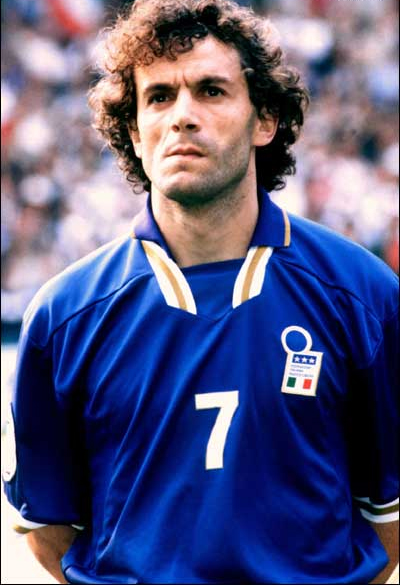 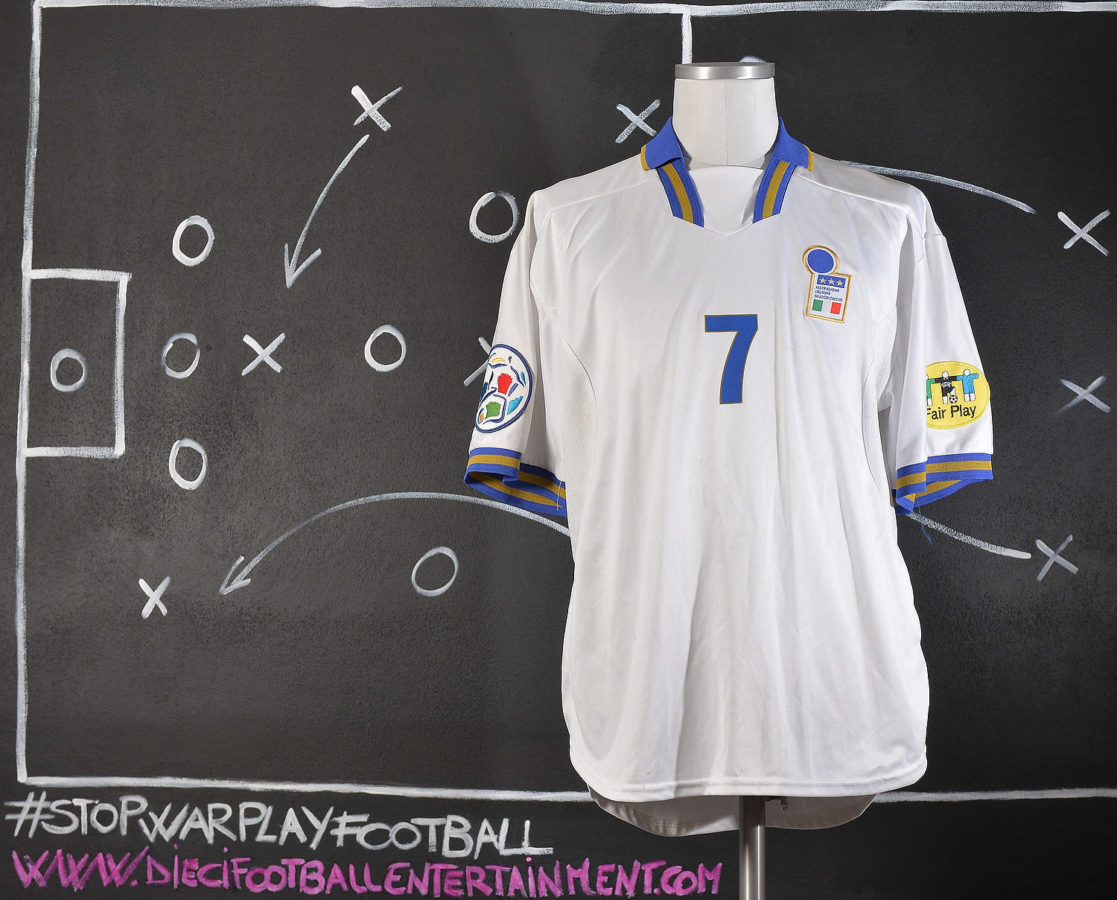 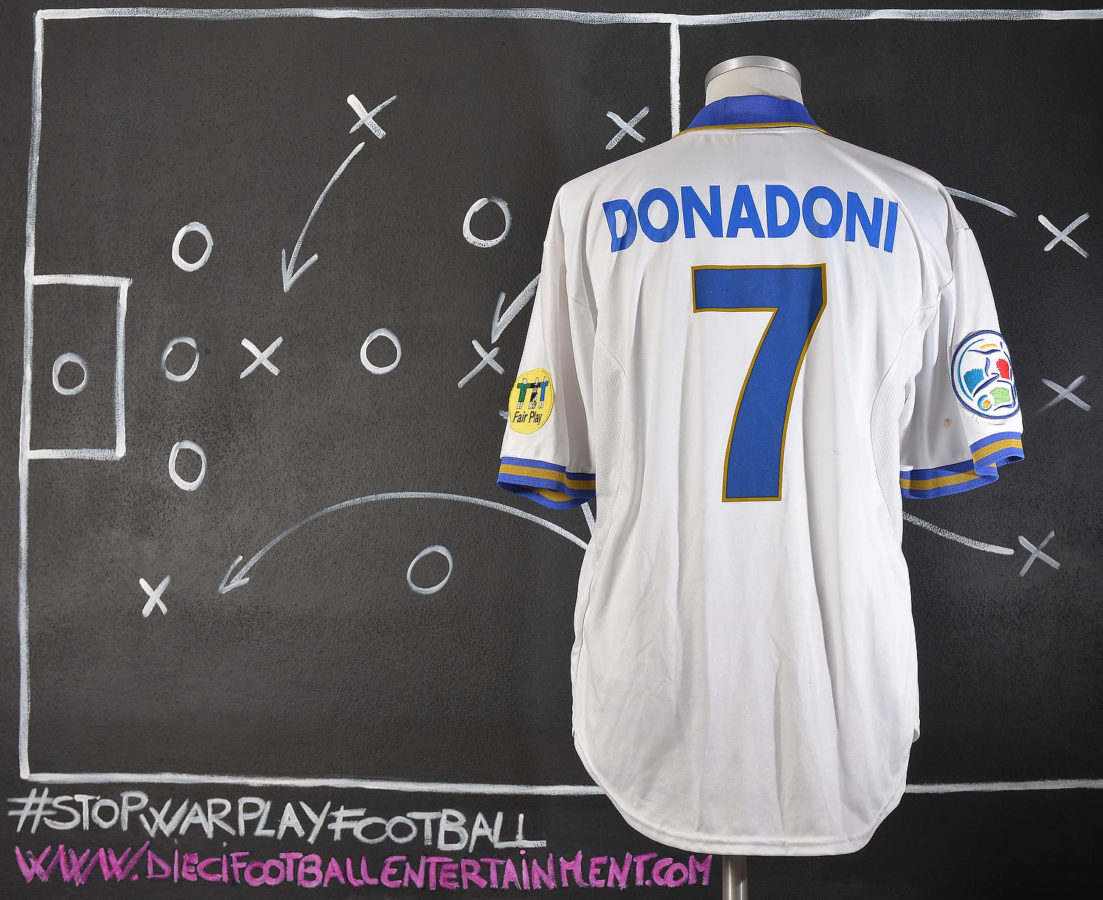 Euro 96 was the first tournament where teams played with patches on sleeves. On the left sleeve there was the competition patch. On the right sleeve there was the well known “FAIR PLAY” patch. This white shirt was issued for the team but never used because Italy played all the three games of the group’s stage with classical home sky blue shirt. 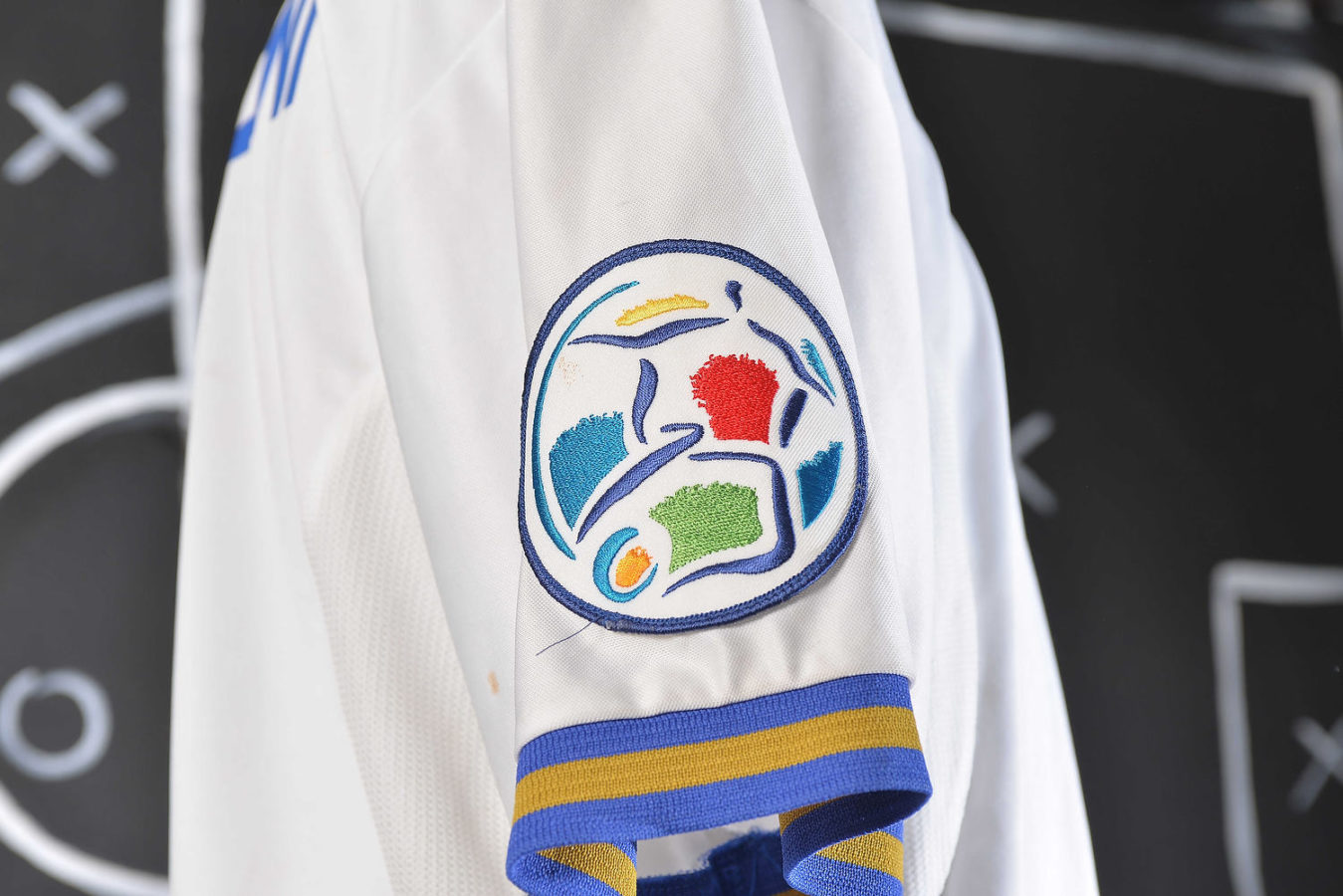 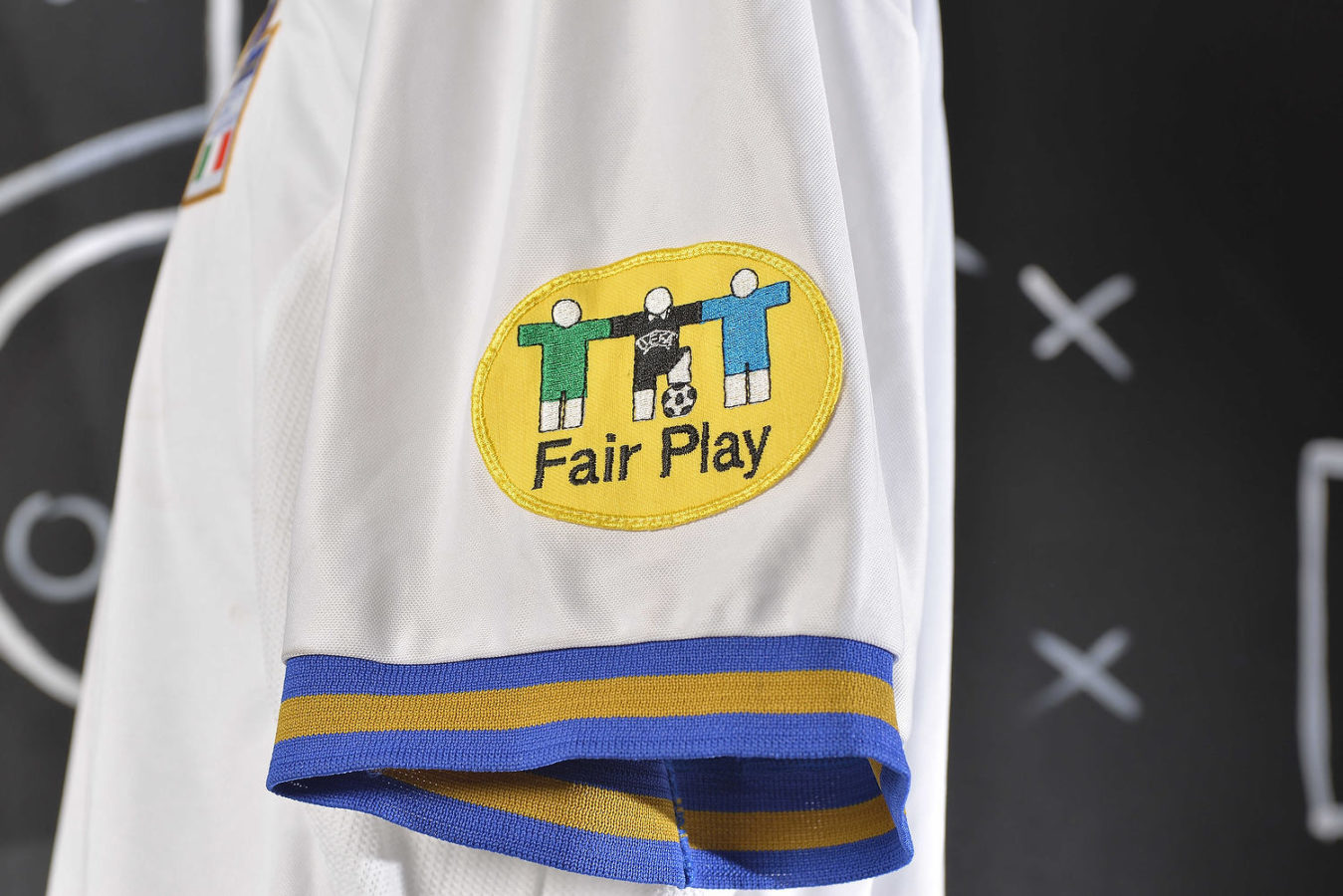 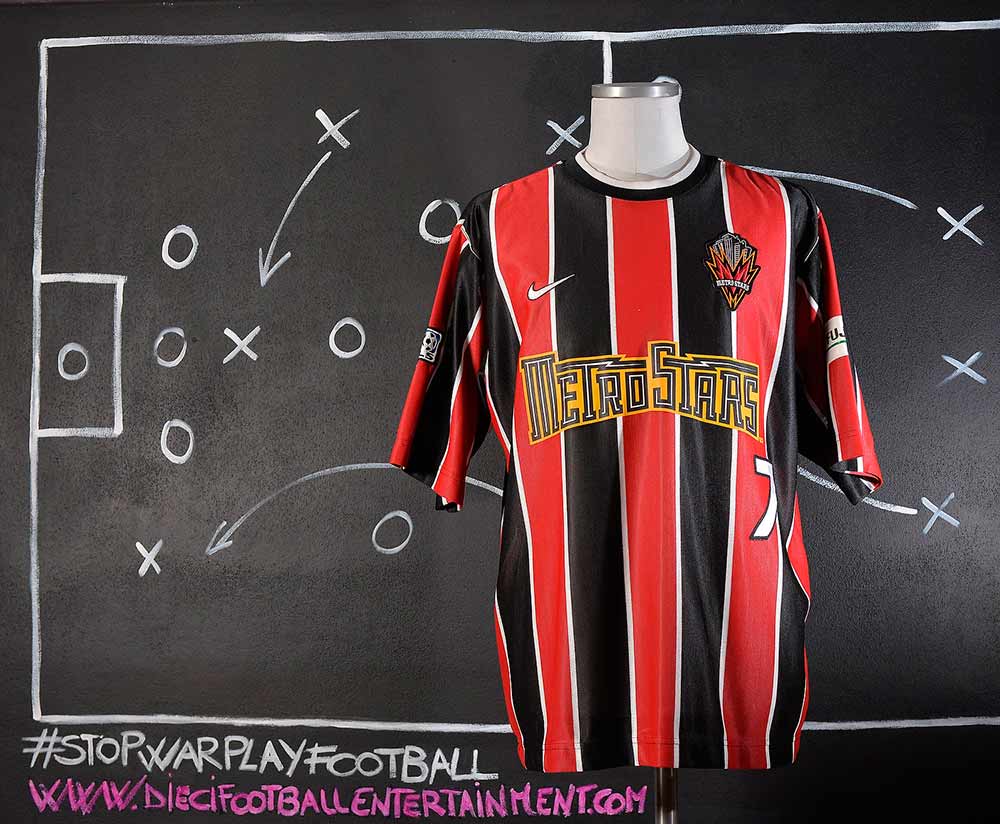 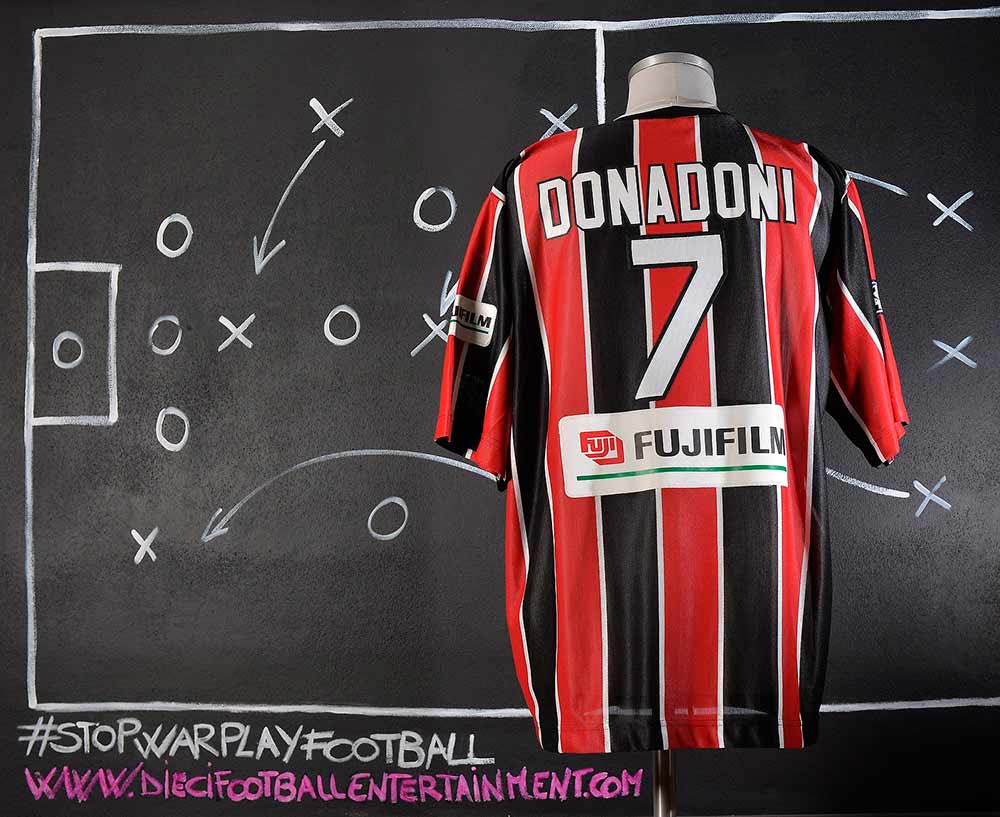 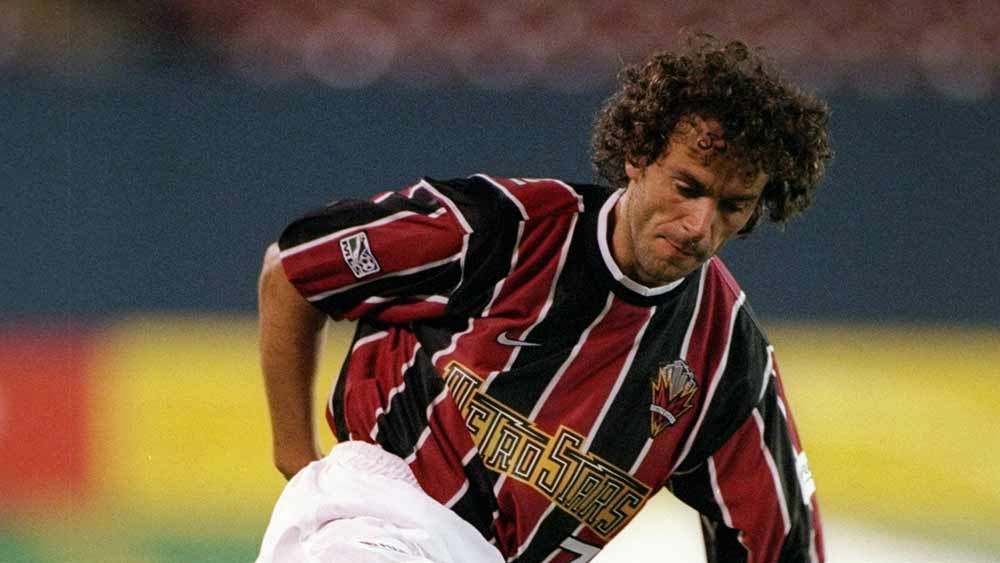 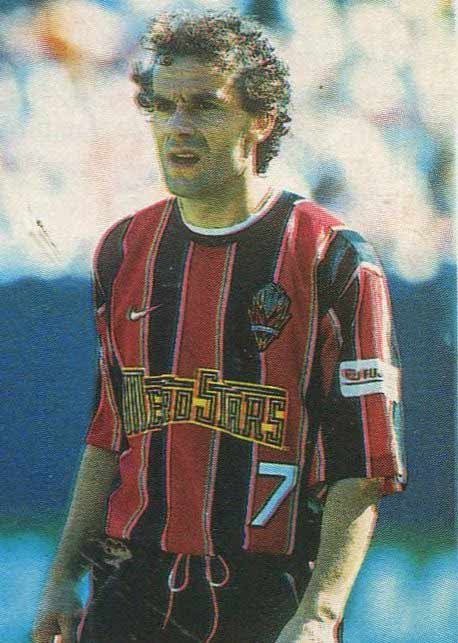 The 1996 season was the first season in New York/New Jersey MetroStars’s existence, in the first season of American Major League Soccer. They played their home games at Giants Stadium in East Rutherford, New Jersey. The team played 38 matches in the season including 35 Major League Soccer games and 3 friendlies. Eddie Firmani coached the team for their first eight games before being replaced by Carlos Queiroz.

Regarded as one of Italy’s greatest ever wingers, Donadoni was a quick, consistent, intelligent, and complete wide midfielder, who was capable of playing on either wing, through the centre, or even as an attacking midfielder, although he was most frequently deployed on the right flank. A highly talented player, who was an important member of his club and national sides throughout his career, he stood out for his pace, agility, and his outstanding technical ability; his acceleration, control, dribbling skills, and creativity allowed him to beat players with feints when undertaking individual runs. A hard-working, tactically versatile, and energetic player, he was also known for his stamina, which allowed him to contribute defensively as well as offensively, as well as his vision and distribution, which enabled him to function as a box-to-box player. Donadoni possessed a unique capability to deliver assists to team-mates in the area from accurate curling crosses and set-pieces; he was also a powerful and accurate striker of the ball from distance with both feet, despite being naturally right footed. Michel Platini described him as Italy’s greatest player of the 90s. 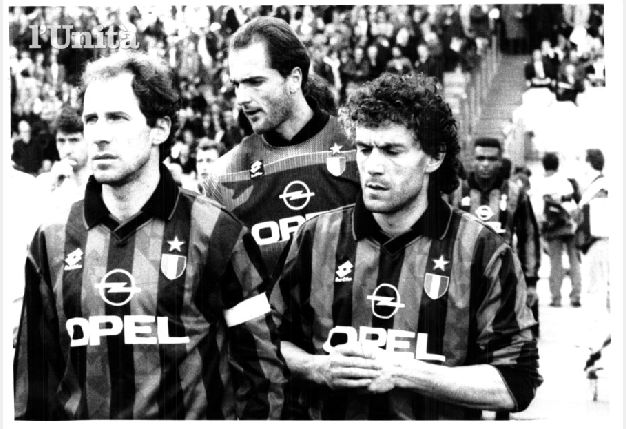 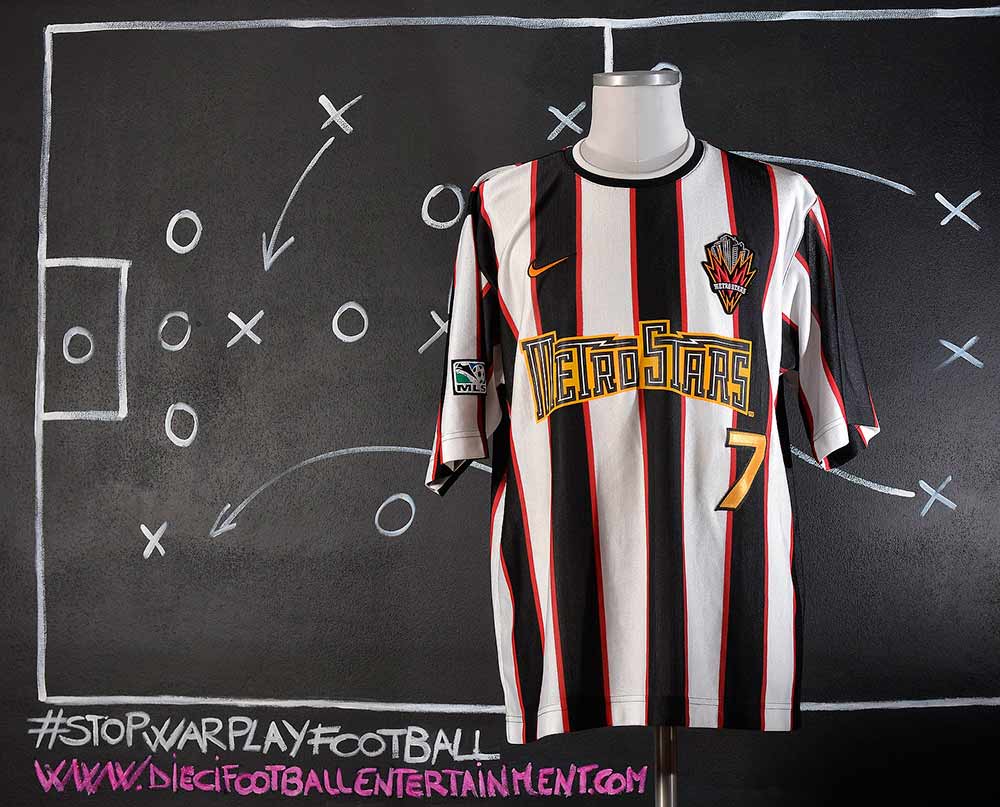 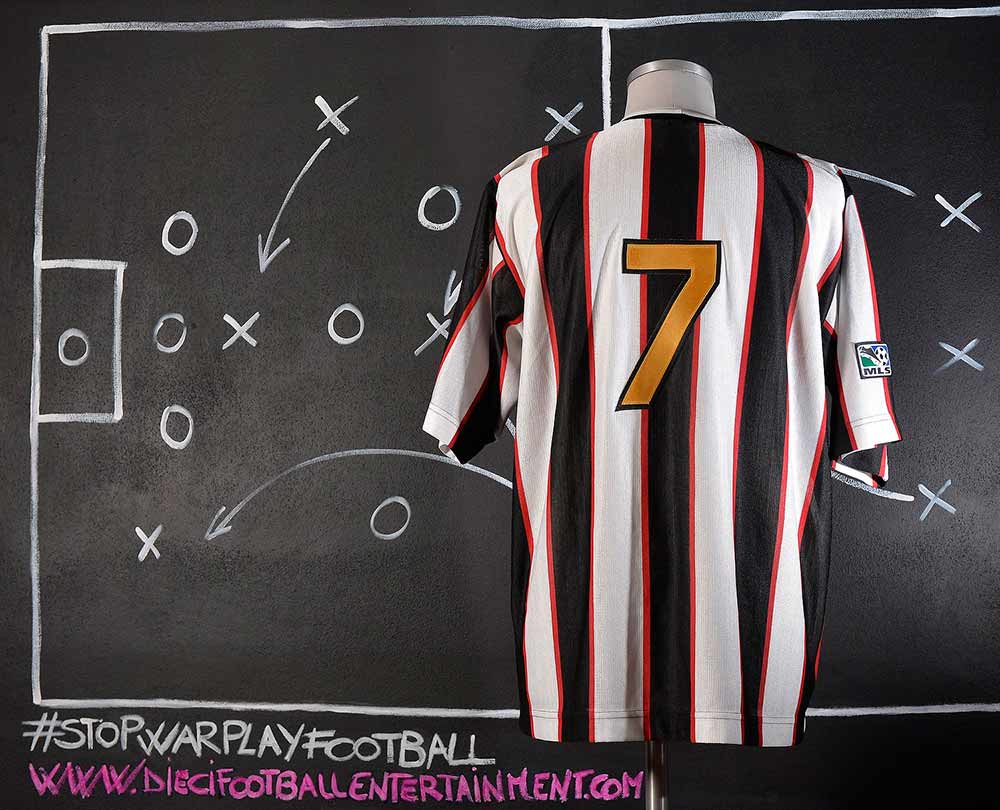 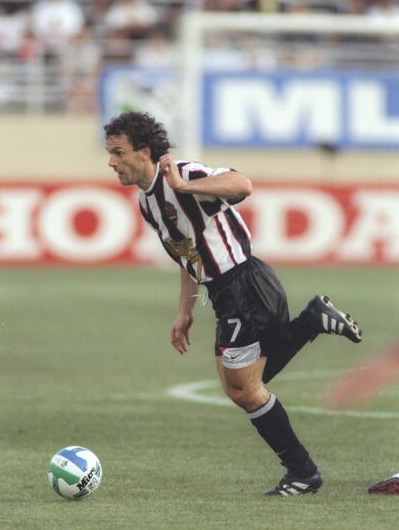 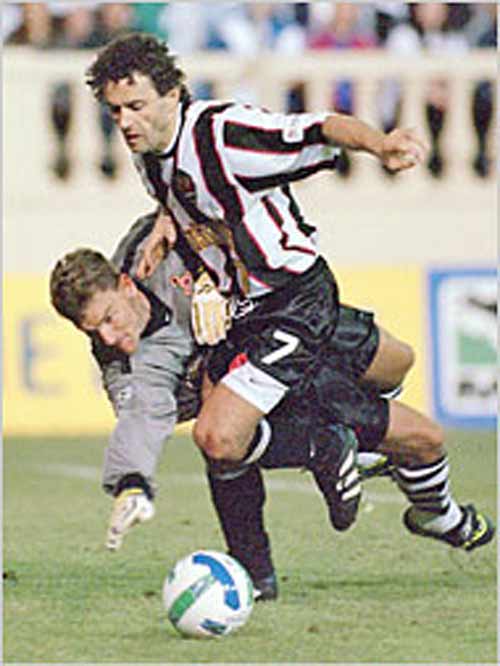 After winning his fifth Serie A title with Milan, and following the retirement of several key Milan players, including Franco Baresi and Mauro Tassotti, as well as the departure of manager Fabio Capello, Roberto Donadoni temporarily retired from professional football, although he later went on to play in the MLS in the United States. The NY/NJ MetroStars of Major League Soccer made him a centerpiece of their franchise when they signed him in 1996. During his first year with the Metros, he was recalled to the Italian national team. He proved a solid performer, being named to the league Best XI in 1996, and was also named an MLS Eastern Conference All-Star, winning the inaugural 1996 MLS All-Star Game 3–2 over the Western Conference MLS All-Stars. Unfortunately, Donadoni’s play could not bring the MetroStars any success as a club. In total, Donadoni scored six goals for the MetroStars.

Grosso Grosso2019-06-17T10:55:20+00:00
Page load link
This site uses cookie technology, including third parties' ones. If you want to know more click here. If you access any element of this site outside this banner, you consent to the use of cookies. Ok