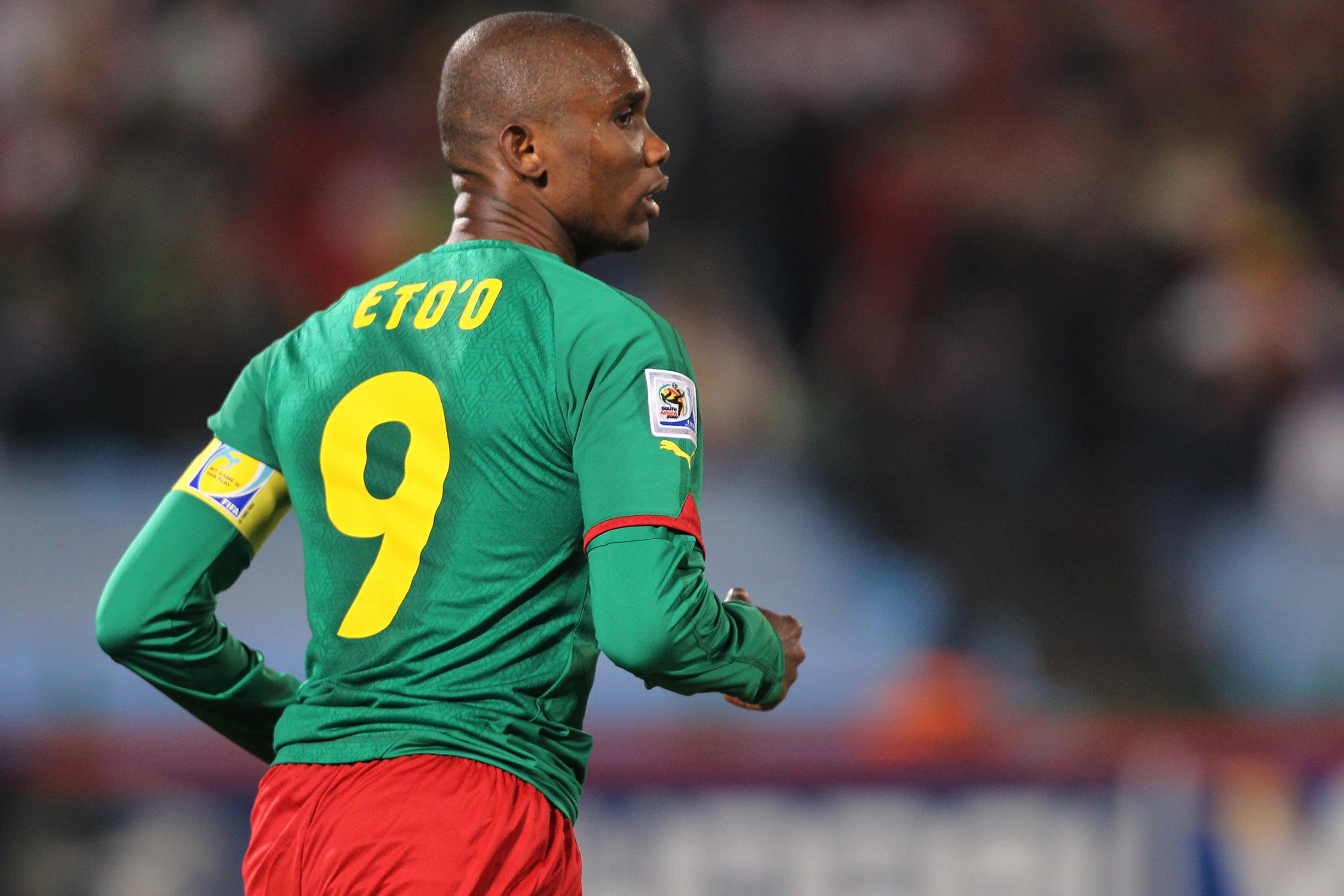 Samuel Eto’o Fils is a Cameroonian retired professional footballer who played as a striker. In his prime, Eto’o was regarded by pundits as one of the best strikers in the world, and he is regarded as one of the greatest African players of all time, winning the African Player of the Year a record four times: in 2003, 2004, 2005, and 2010. A precocious talent, Eto’o moved to Real Madrid as a 16 year old. Due to competition in his position with more experienced players, he had several loan spells, before signing for Mallorca in 2000 where he scored 70 goals. His impressive form saw him join Barcelona in 2004 where he scored 130 goals in five seasons and also became the record holder for the most number of appearances by an African player in La Liga. Winning La Liga three times, he was a key member of the Barcelona attack, alongside Ronaldinho, that won the 2006 UEFA Champions League Final, with Eto’o scoring in the final, and was part of a front three of Lionel Messi and Thierry Henry that won the 2009 UEFA Champions League Final, with Eto’o again scoring in the final. He is the second player in history to score in two UEFA Champions League finals. At Barcelona, Eto’o came in third for the FIFA World Player of the Year in 2005 and was twice named in the FIFA FIFPro World XI, in 2005 and 2006. In 2009, he signed with Inter Milan, where he became the first player to win two European continental trebles following his back-to-back achievements with Barcelona and Inter. He is the fourth player in Champions League history, after Marcel Desailly, Paulo Sousa, and Gerard Piqué, to have won the trophy two years in a row with different teams. After brief spells with Anzhi Makhachkala, Chelsea, Everton, and Sampdoria, Eto’o found prolific form again in the Süper Lig with Antalyaspor having scored 44 goals in 76 league games. In 2015, he received the Golden Foot Award. As a member of the Cameroon national team, Eto’o was a part of the squad that won the Gold Medal at the 2000 Olympics. He also won the Africa Cup of Nations in 2000 and 2002. Eto’o has participated in four World Cups and six Africa Cup of Nations. He is the all-time leading scorer in the history of the Africa Cup of Nations, with 18 goals, and is Cameroon’s all-time leading scorer and third most capped player, with 56 goals in 118 caps. Eto’o announced his retirement from international football in August 2014. 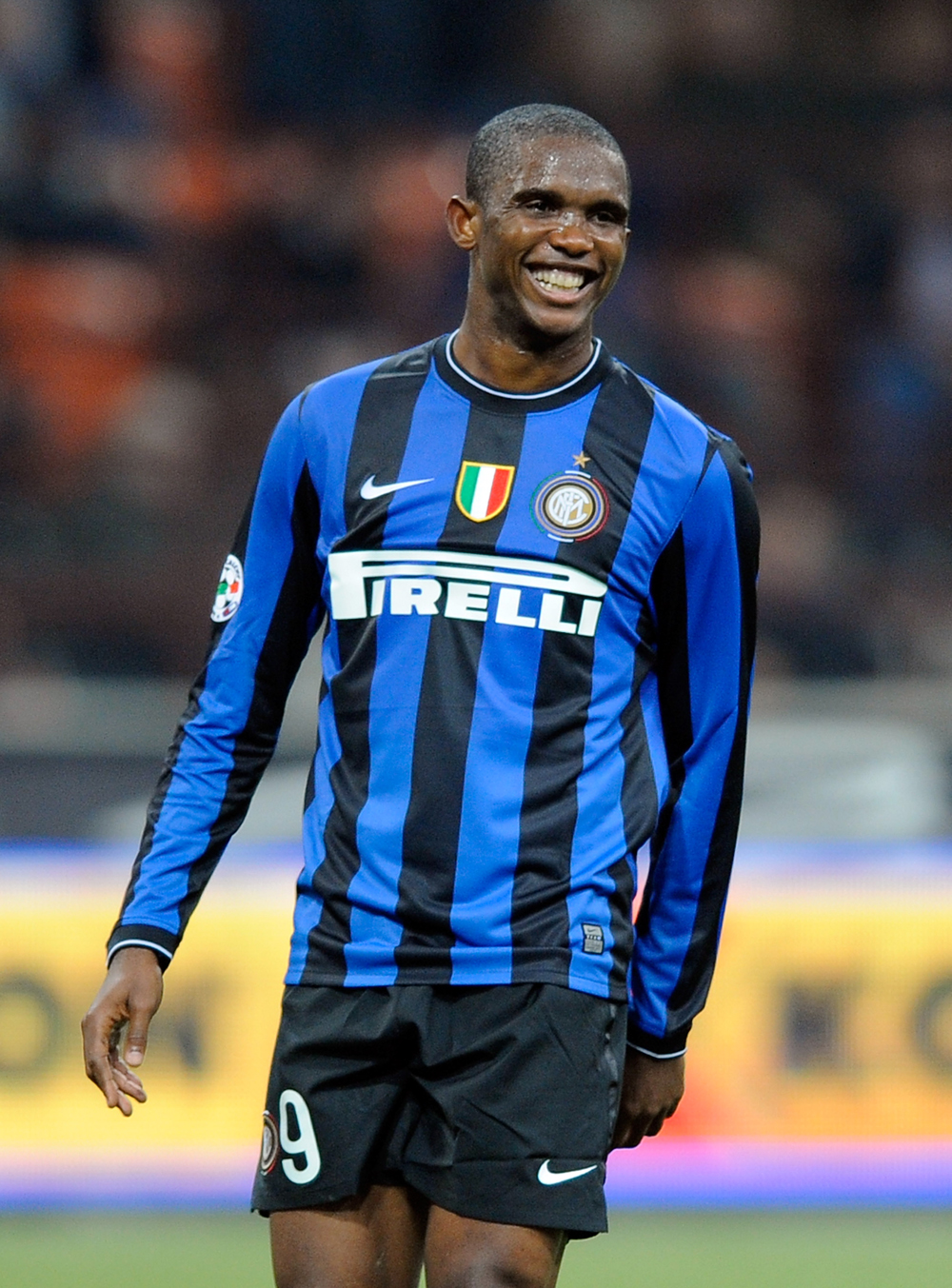 After Maxwell completed the transfer from Inter Milan, Joan Laporta confirmed that there was an agreement in principle between Barcelona and Inter Milan for Zlatan Ibrahimović to join the club in exchange for Eto’o and €46 million. After Ibrahimović agreed terms with Barcelona, the club announced Eto’o would travel to Milan for his medical to complete the transfer. On 27 July 2009, Eto’o passed his medical and signed for five years with Inter. On his first press-conference in Milan, he declared that he was where he wanted to be and refused to compare himself to Ibrahimović saying, “I’m Samuel Eto’o and I don’t want to compare myself to anyone. I believe the victories I have earned up to now can contribute to giving the right value to my name.” On 8 August, Eto’o scored on his competitive debut in the 2009 Supercoppa Italiana as Inter lost 1–2 to Lazio. Two weeks later, Eto’o scored from the penalty spot against Bari in his first Serie A match. In the following match, the Derby della Madonnina against Milan, Eto’o won Inter a penalty after being brought down by Gennaro Gattuso in the box; Milito scored the penalty and Gattuso was yellow carded and eventually sent off. Inter won the match 4–0. Eto’o scored again on 13 September against Parma, his first goal from open play in a Serie A match. At the end of September 2009, Eto’o demanded almost £2.75 million from Barcelona after his transfer to Inter. The amount represented 15% of the £17.7 million (US$29 million) fee which Inter paid Barcelona in July 2009. The demand was based on a Spanish rule that a player should get 15% of the amount of his transfer to another Spanish club. If the parties failed to reach a solution, the matter could go to court. Eto’o scored his first Serie A brace on 29 October during a 5–3 win over Palermo, with Mario Balotelli also scoring twice. On 1 December 2009, Eto’o finished fifth in voting for the Ballon d’Or, which was won by his former Barcelona teammate Lionel Messi. Eight days later, he scored his first UEFA Champions League goal for the team in the final Group F match against Rubin Kazan to help Inter win 2–0 at home and progress to the knockout stage as runner-ups. Eto’o continued to be a protagonist for Inter in Europe, netting the winner in the second leg of 2009–10 UEFA Champions League round of 16 against Chelsea on 16 March 2010, which allowed Inter to progress to the quarter-finals. He scored his first goal in Coppa Italia on 13 April against Fiorentina in the second of semi-finals to help Inter win 1–0 at Stadio Artemio Franchi and progress in the final 2–0 on aggregate. Eto’o won his first silverware with the club on 5 May as Inter defeated Roma 1–0 at Stadio Olimpico to lift the Coppa Italia. His 12 Serie A goals helped Inter claim another championship, the fifth consecutive, after defeating Siena in the final matchday. On 22 May 2010, Eto’o played in the third Champions League final of his career, as Inter won 2–0 over Bayern Munich to win the first title in 45 years; Milito scored both goals, with Eto’o setting up the second. With Inter’s triumph over Bayern Munich, he became the only player to win the treble in consecutive seasons with two different teams. On 21 August 2010, Eto’o scored twice as Inter beat Roma 3–1 to win the Supercoppa Italiana. His first hat trick for Inter occurred in the UEFA Champions League against Werder Bremen on 29 September 2010. Inter won the game 4–0, with Eto’o saying, “We will remain humble because we know that there are sides out there that are better than us, so we will just take it one match at a time and we will go as far as it takes us.” Continuing his outstanding form in Serie A and in the Champions League for the 2010–11 campaign, he was pivotal to Inter’s attack line. On 16 March 2011, Eto’o gave a legendary performance in Munich as he helped Inter eliminate Bayern Munich 3–2 (with an aggregate score of 3–3, winning on away goals) in the Champions League. Eto’o scored the first goal after four minutes, and provided two clinical assists to Wesley Sneijder and to Goran Pandev for the winner. After the game, Inter President Massimo Moratti said, “I’m not sure if the deal that brought Eto’o to the club was my best piece of transfer business ever, but I really think it was a great piece of business for us. Eto’o is fantastic. I do not want to take anything away from Ibrahimović, but for everyone it was really a great deal to get Eto’o. Samuel is truly extraordinary.” On 29 May, Eto’o scored two goals in the final of the Coppa Italia against Palermo to help Inter win 3–1 and taking his total season goals to 37, a new record high for him. 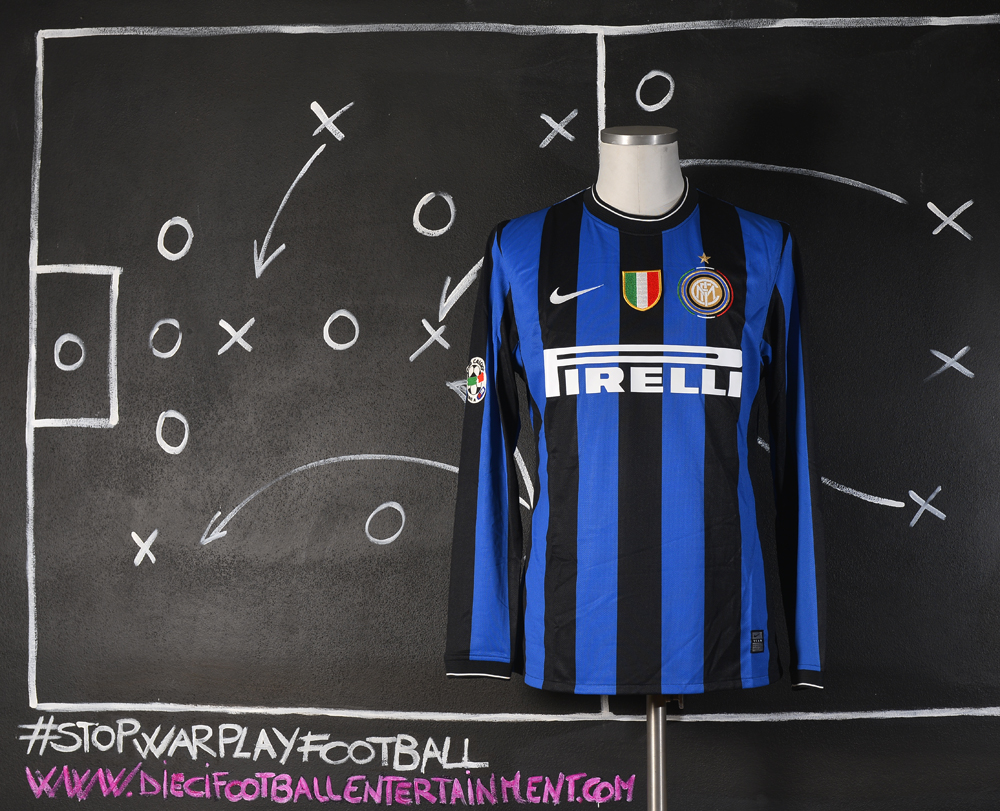 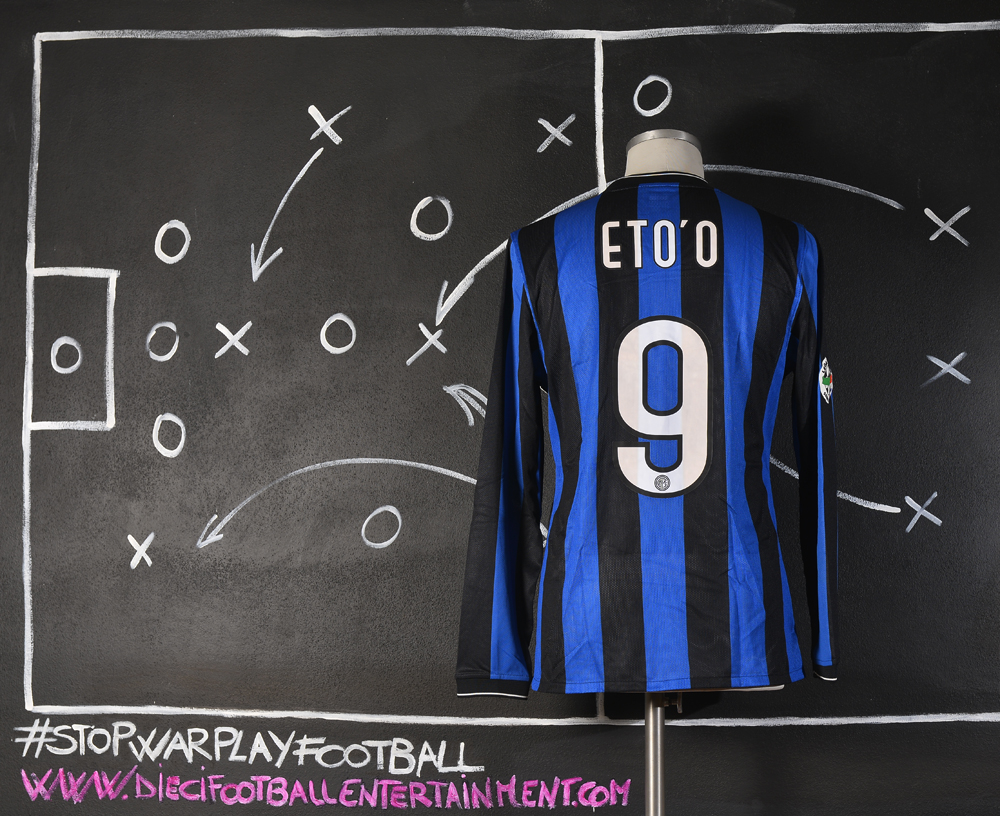 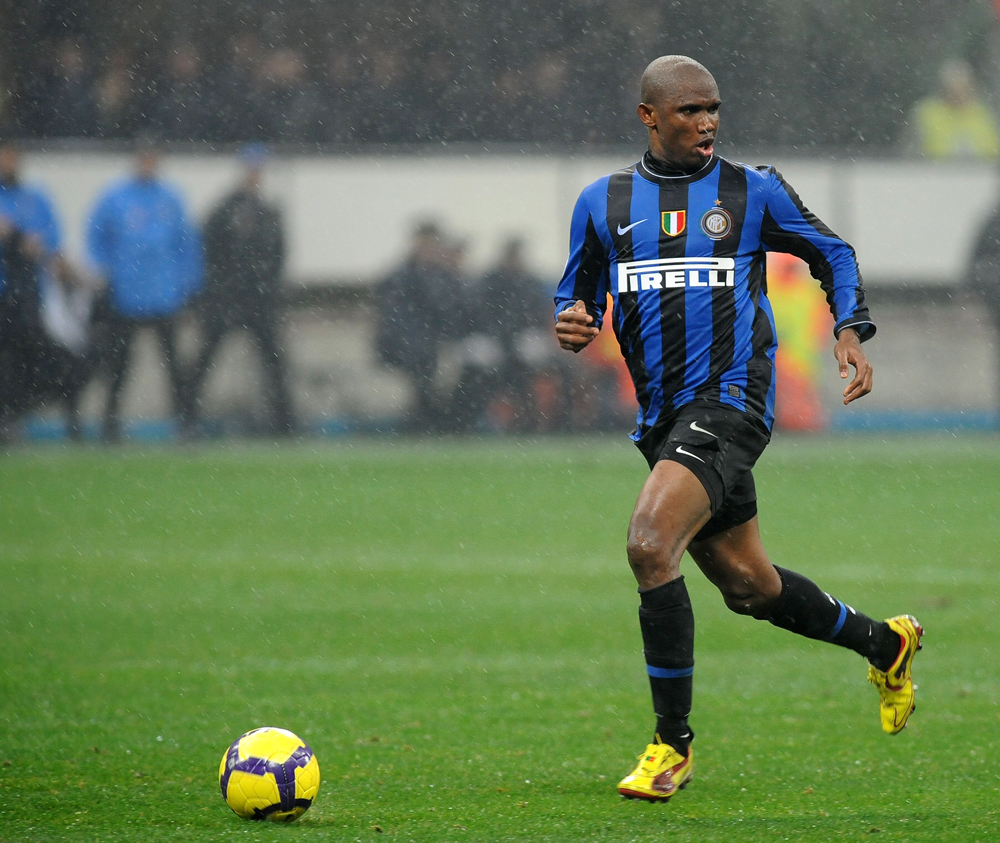 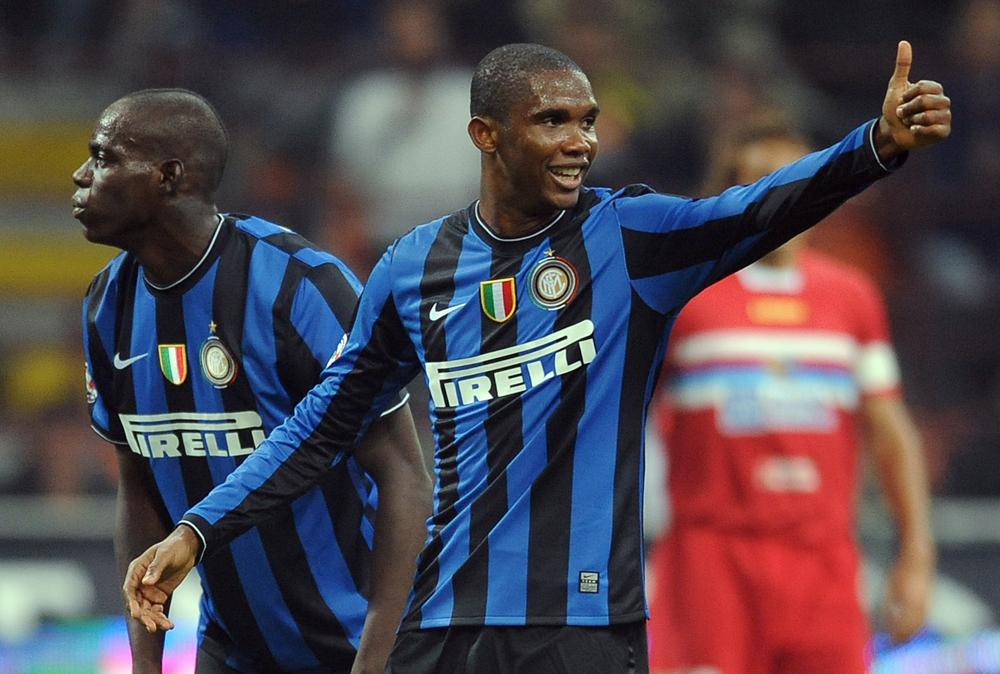 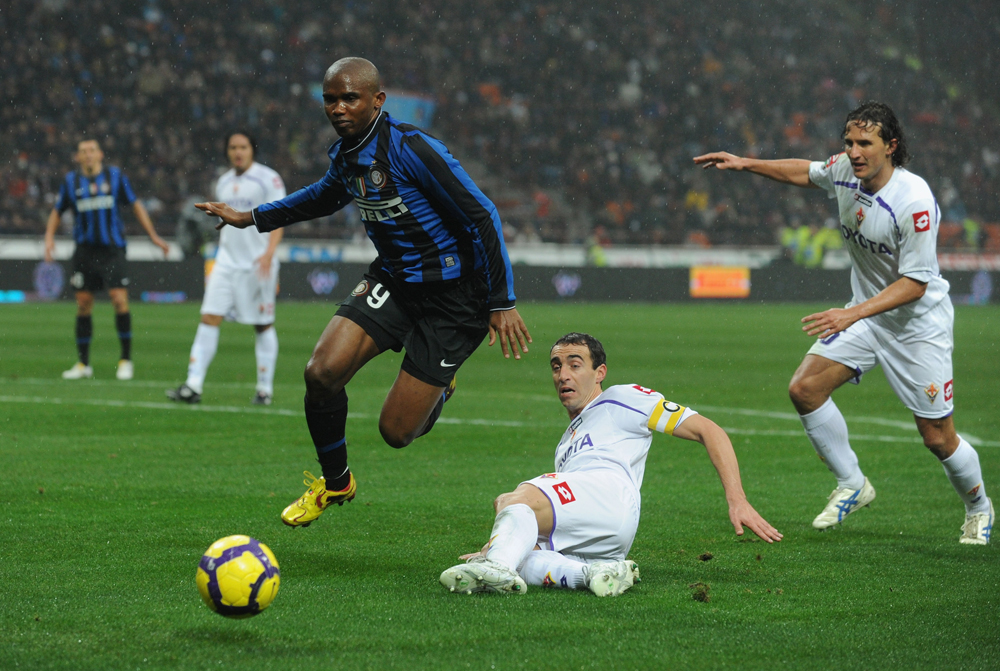 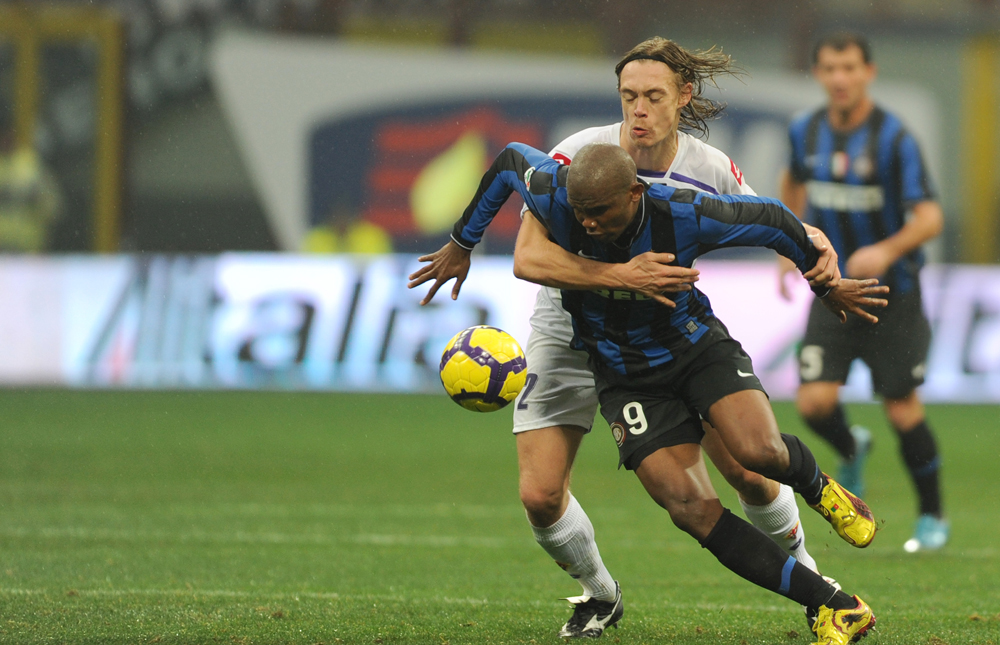 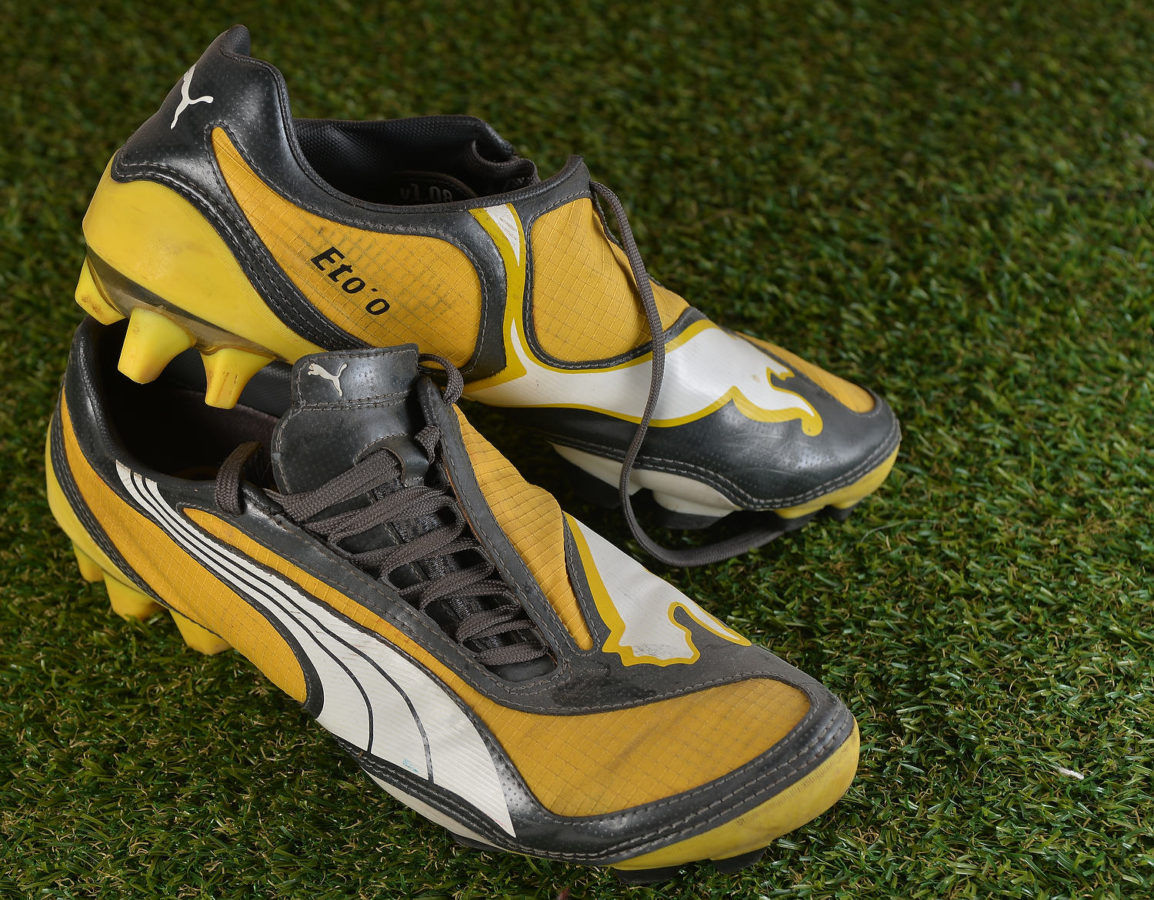 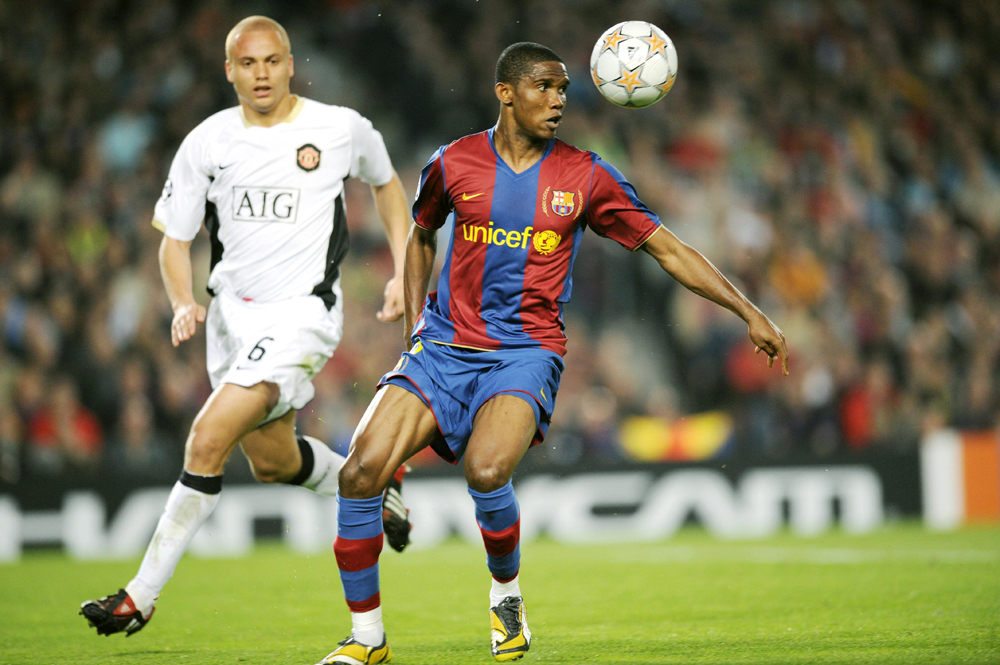 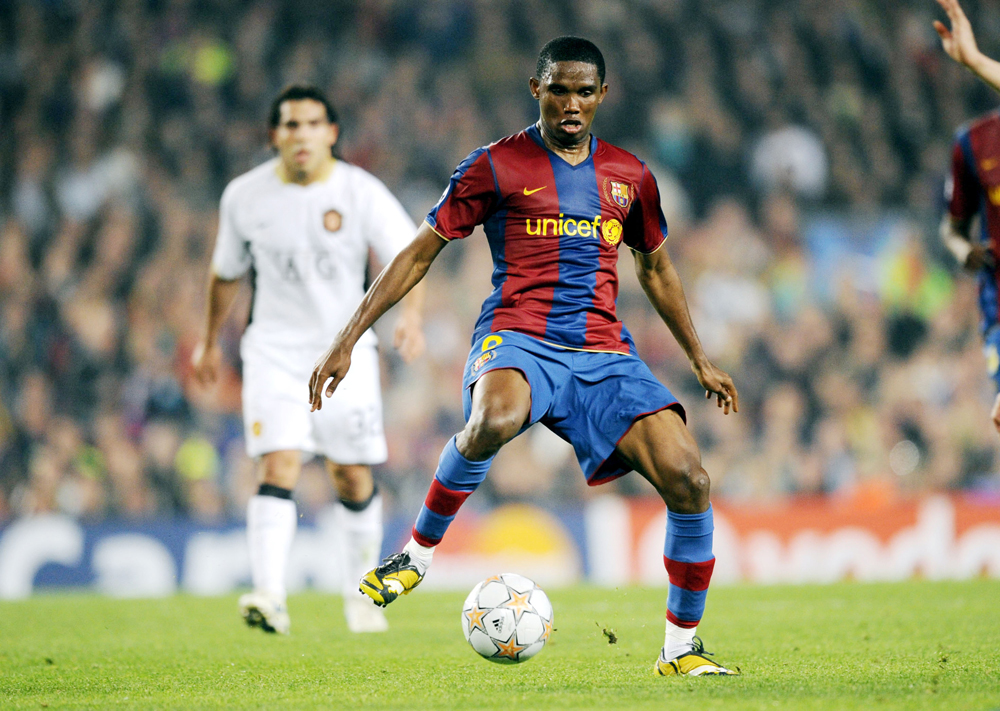 Eto’o is a fast, strong, and energetic forward, who is known for his stamina, work-rate, ability in the air, and his accurate finishing ability both with his head and feet. A powerful and prolific goalscorer with good technique, composure in front of goal, and an ability to play off other forwards, Eto’o is primarily deployed as a central striker, although during his time at Inter, under José Mourinho, he demonstrated notable tactical intelligence and versatility by playing in several other positions on the pitch.[98] During Inter’s 2009–10 treble-winning season, Eto’o played an important role in the squad, and was utilised as a winger or even as an attacking midfielder in Mourinho’s 4–2–3–1 formation, where he was primarily required to help his team creatively and defensively with his link-up play and work-rate off the ball. During the return leg of the Champions League semi-final match against Barcelona, Eto’o demonstrated his workrate and versatility by playing as an attacking full-back following Thiago Motta’s controversial sending-off. Eto’o has also been renowned for his leadership, opportunism and mentality throughout his career. In his prime, Eto’o was regarded by pundits as one of the best strikers in the world; he is currently regarded as one of the greatest African players of all time. He is often ranked among the three greatest African strikers, alongside George Weah and Didier Drogba. Despite losing some of his speed with age, he continued to maintain a consistent goalscoring rate as a striker, due to his ability to get into good positions and time his attacking runs, as shown by his goal in a 6–3 loss against Chelsea on 30 August 2014, during his time with Everton. Despite his advancing age, Eto’o has maintained his dribbling skills in his later career, which he uses to his advantage to beat defenders and assist teammates. In his mid-thirties Eto’o incorporated an ‘old man’ routine in his goal celebration – a response to jibes by José Mourinho about being too old – where he bent over and started walking slowly with an imaginary cane, with the celebration featuring in EA Sports’ FIFA video game FIFA 18. 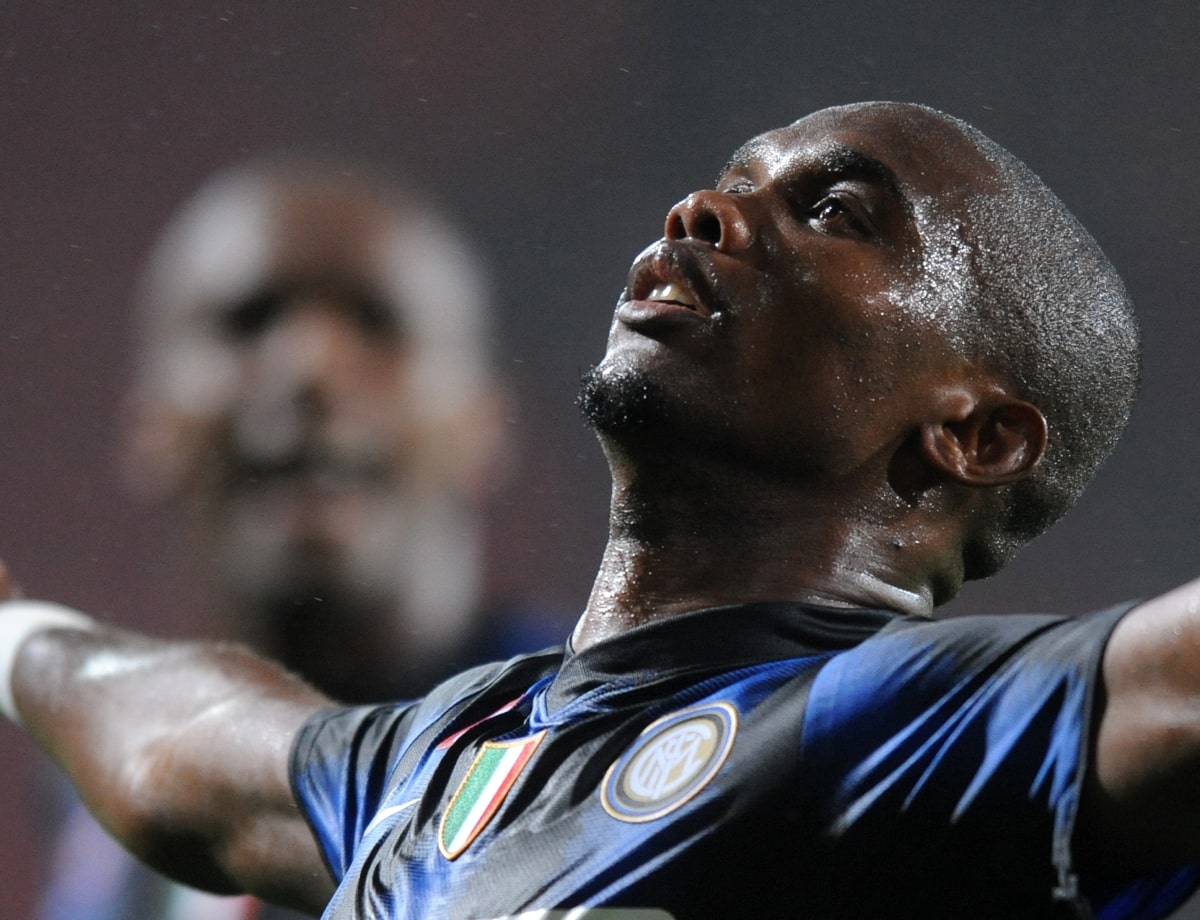 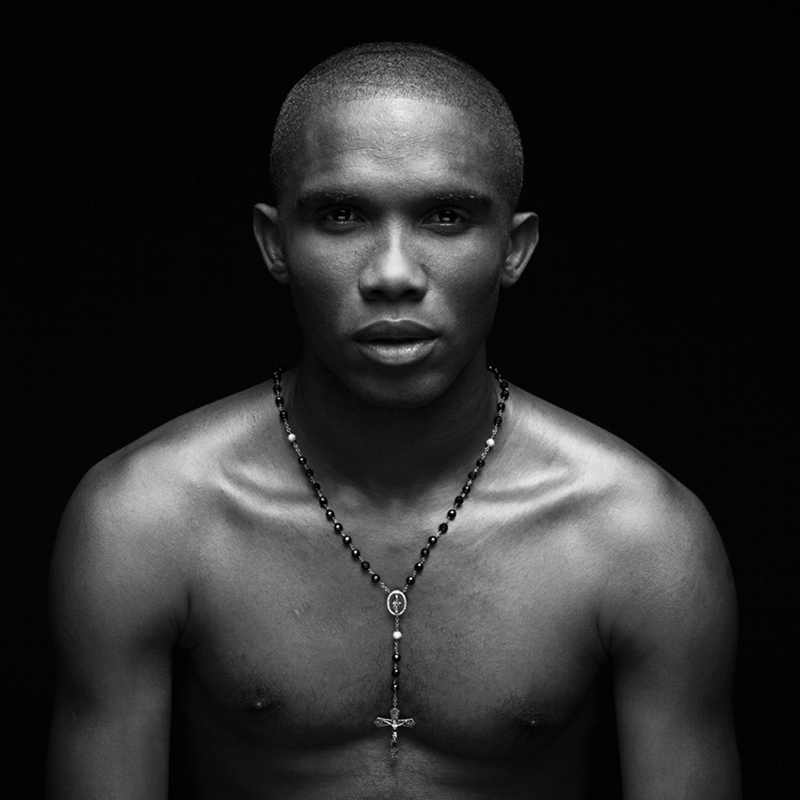 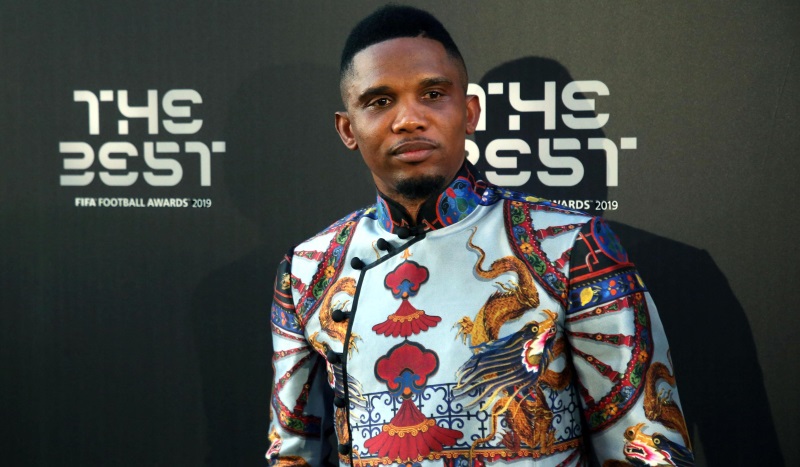 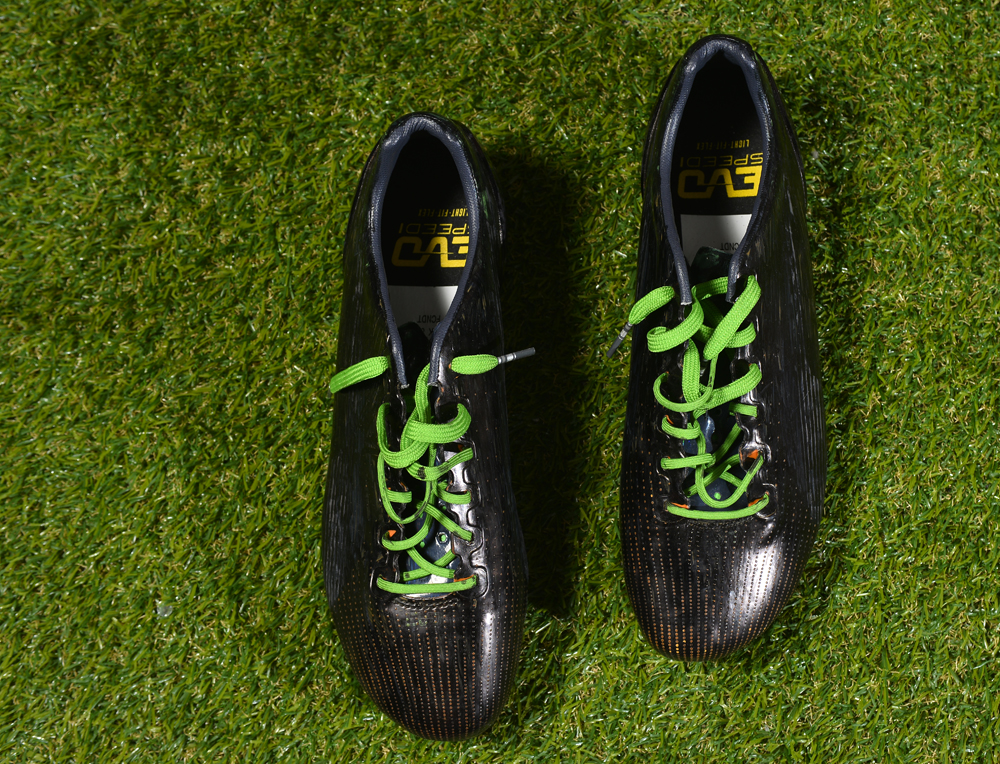 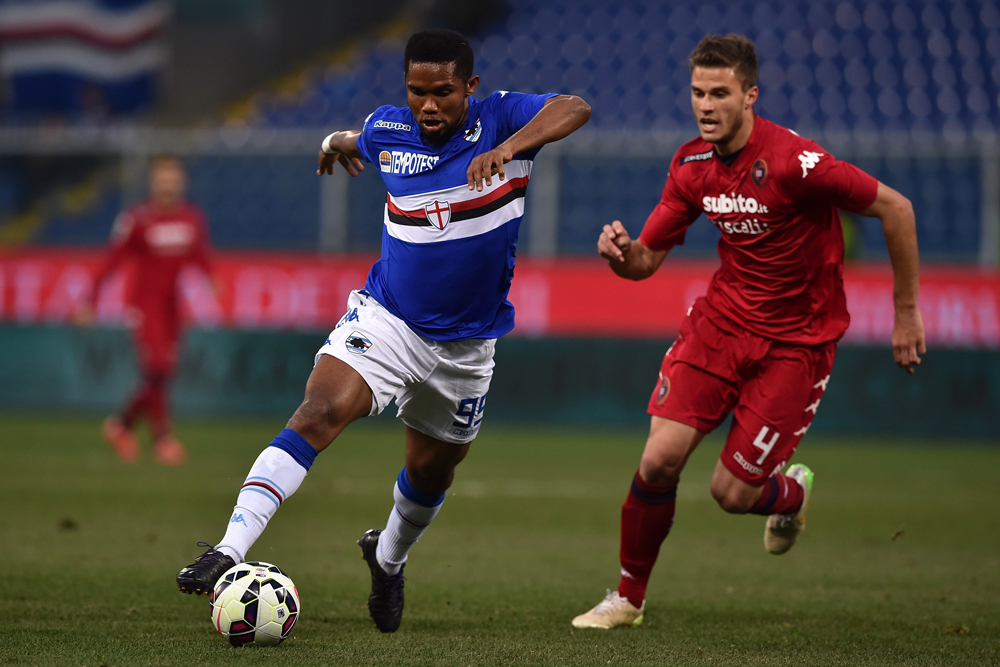 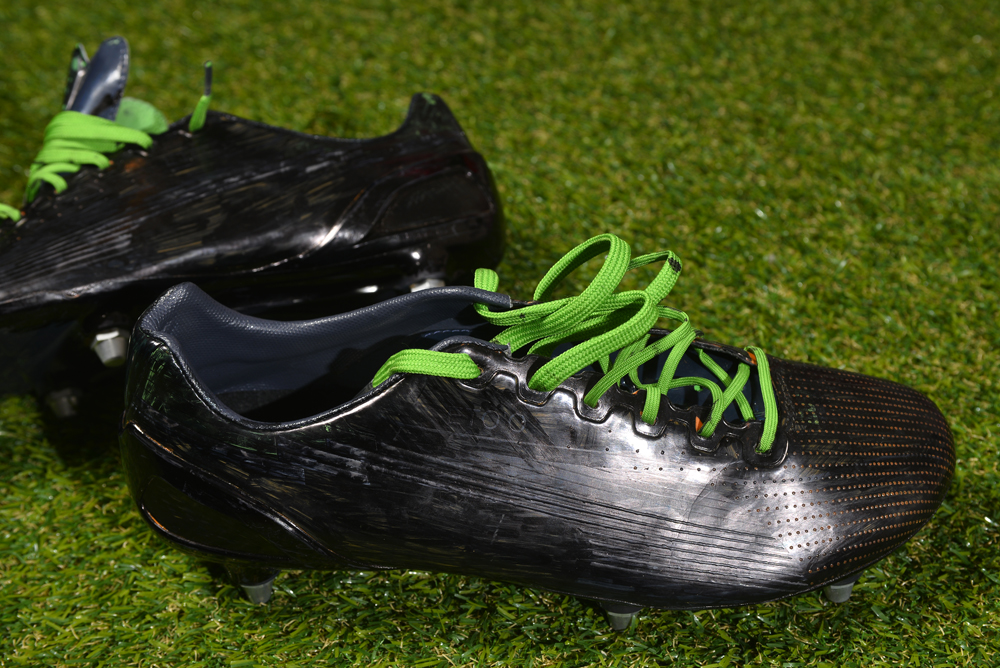 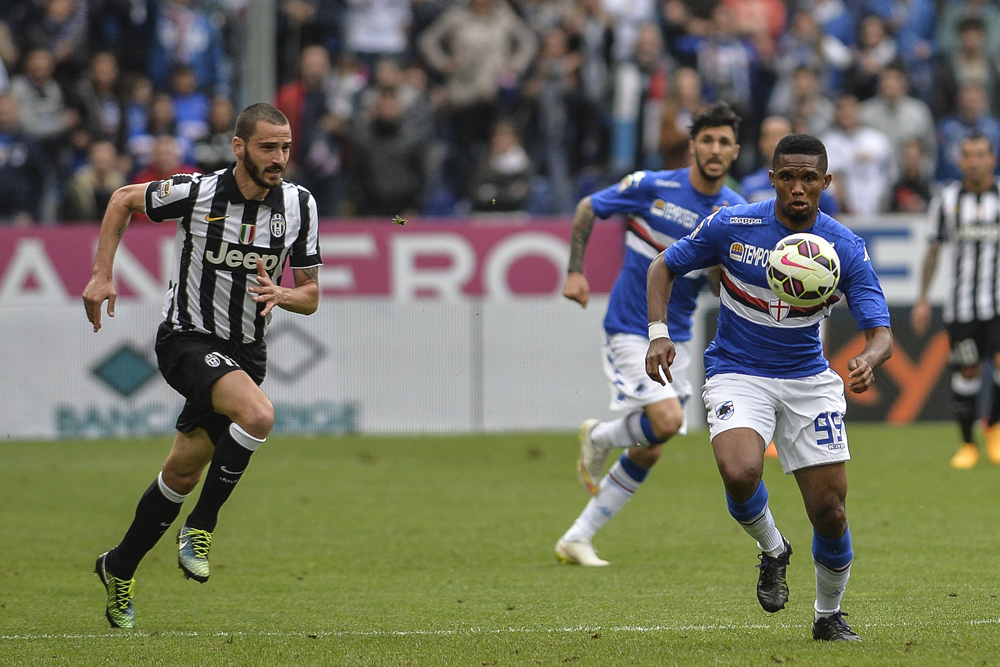 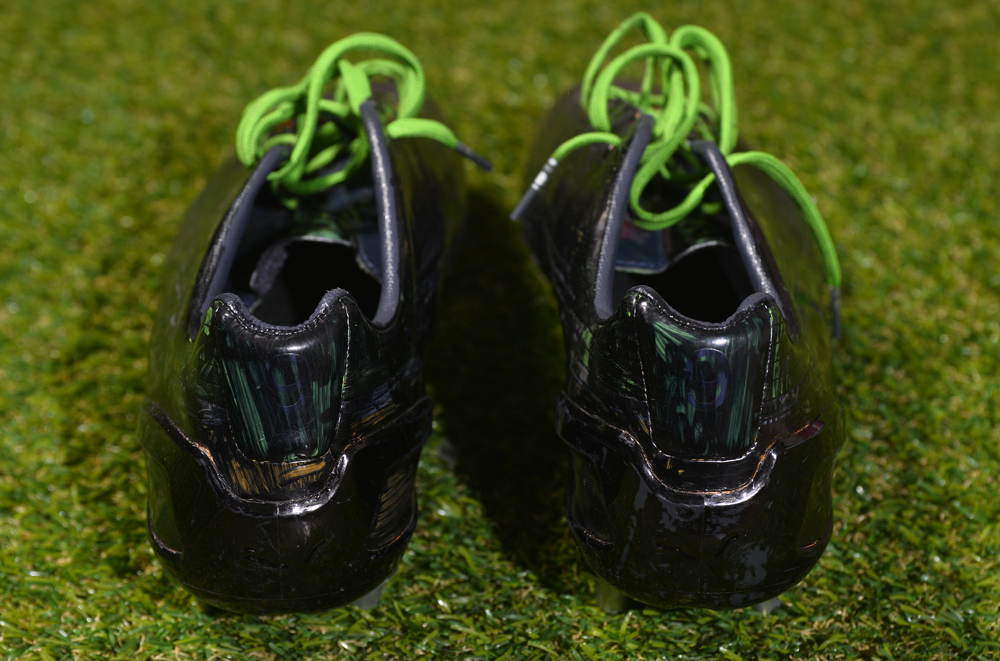 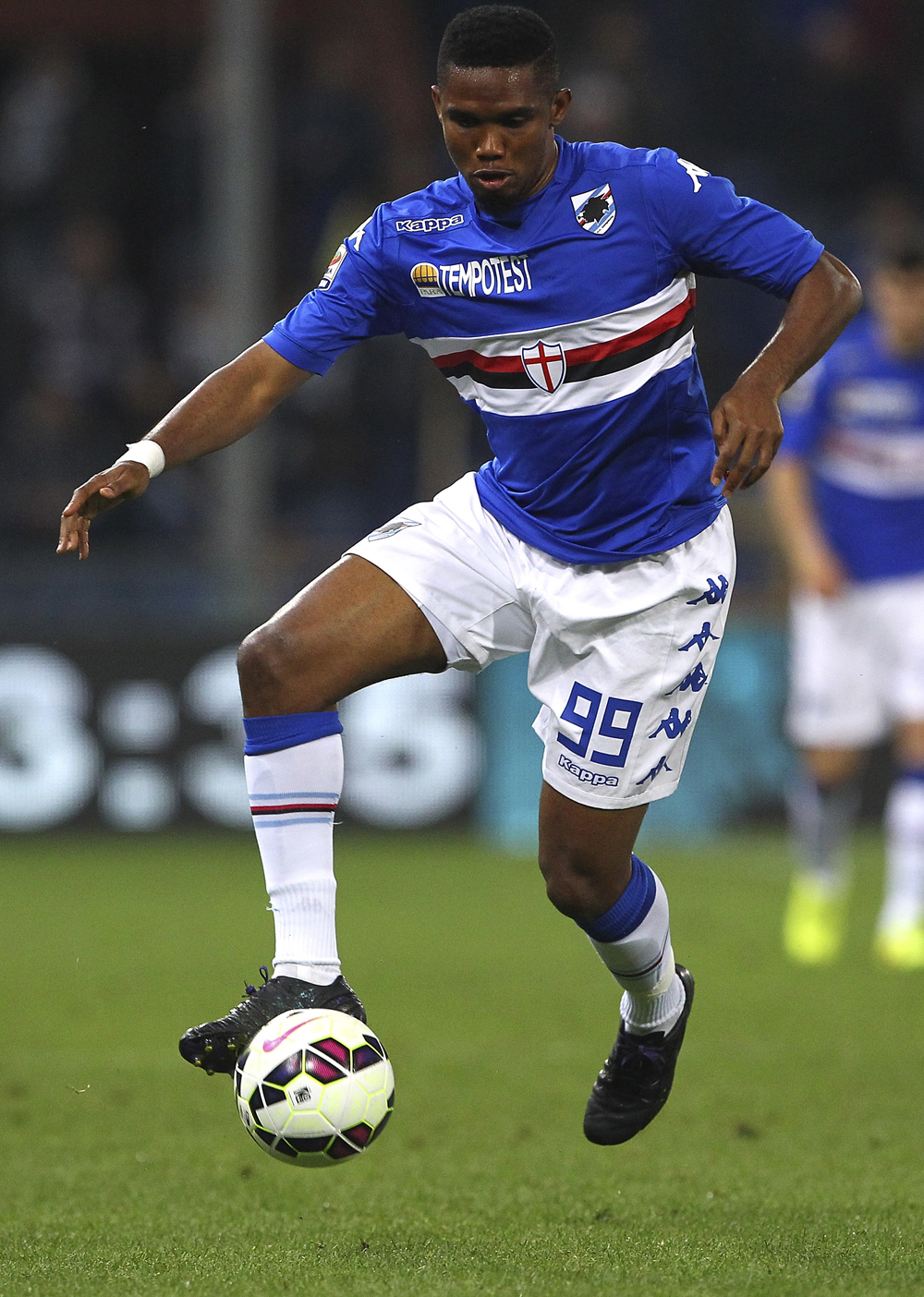 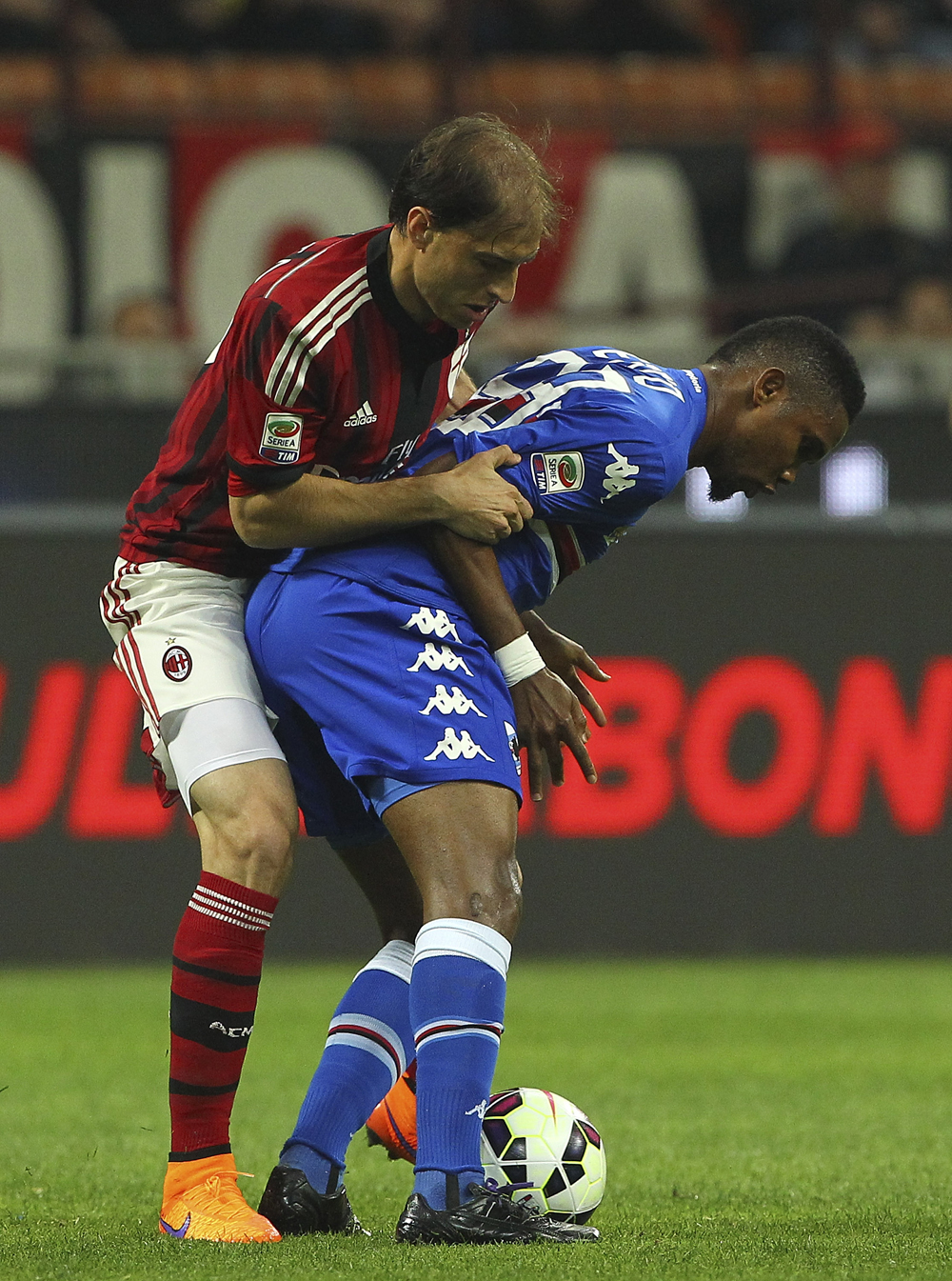 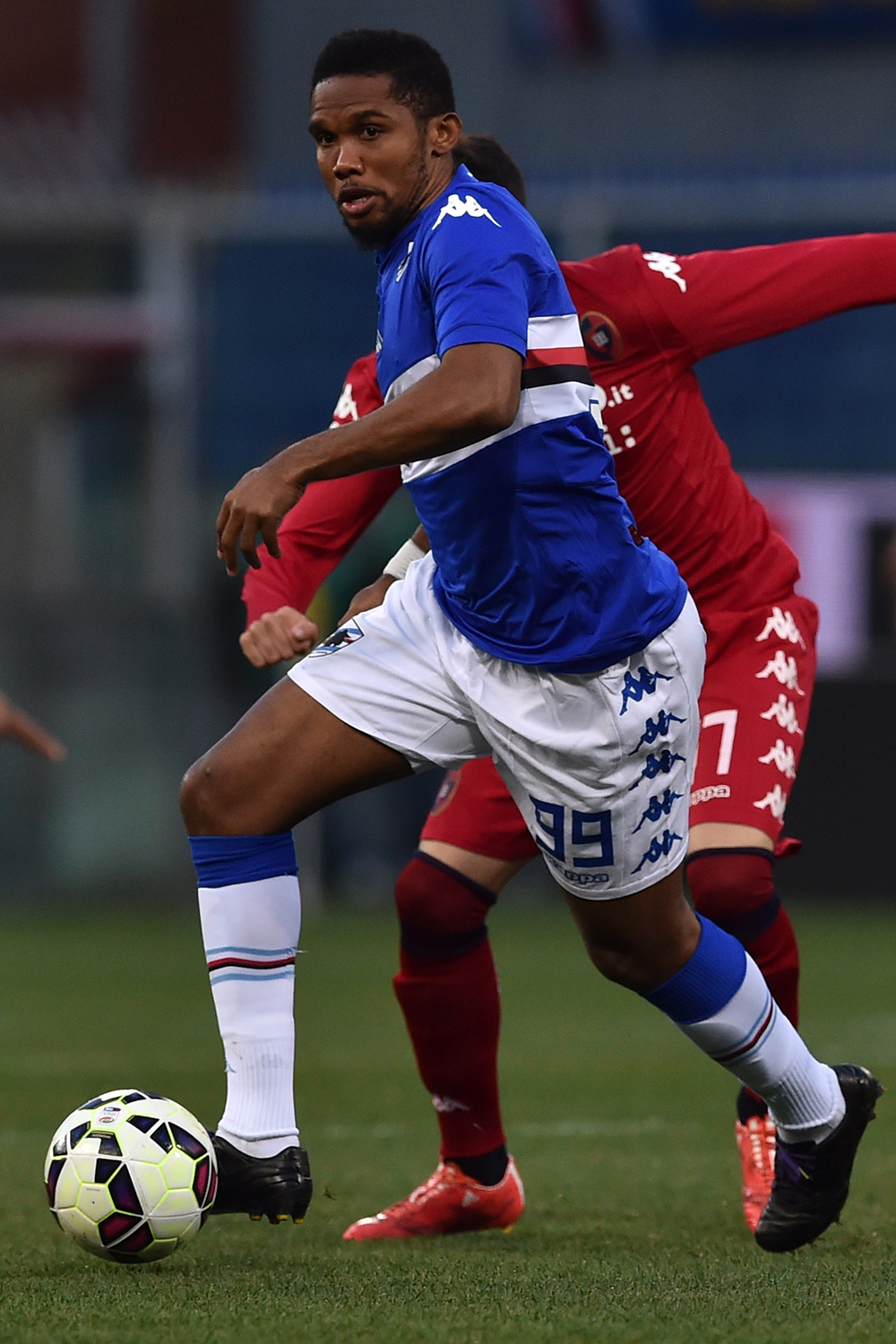 These boots were worn by Samuel Eto’o with U.C.Sampdoria and F.C. Anzhi in two different moments of his career. This model is the Puma “Evospeed 1” that Eto’o firstly used over the 2012/2013 season when he played for F.C.Anzhi and he totally hand painted with a black marker when he wore them with Sampdoria U.C. in the 2014/2015 season. The player was a longterm Puma testimonial during his career until his contract ended up at the beginning of the 2014/2015 when he was at Everton F.C. Since then Eto’o started playing with his old Puma boots, totally painted black. You can see below the original boots he used with Anzhi F.C. before he moved to Sampdoria U.C. Even if painted black Eto’o’s name and number 9 on the heel are still very visible. Eto’o joined Sampdoria U.C. on January 27th 2015 on a two-and-a-half-year deal. For Sampdoria he played 18 games scoring two goals. On 25 June 2015, he moved to Turkish side Antalyaspor on a three-year contract. 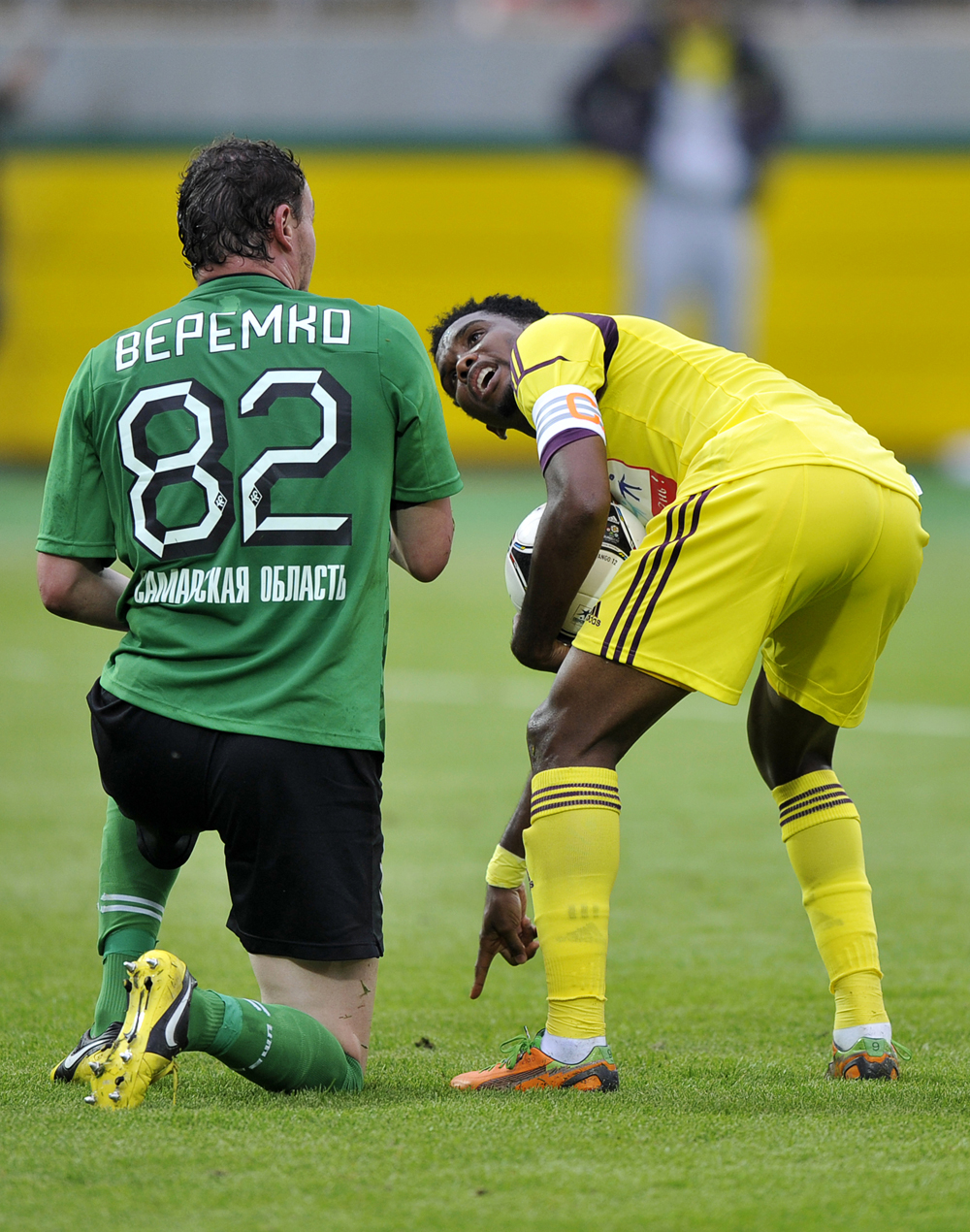 Grosso Grosso2021-05-10T13:44:04+00:00
Page load link
This site uses cookie technology, including third parties' ones. If you want to know more click here. If you access any element of this site outside this banner, you consent to the use of cookies. Ok