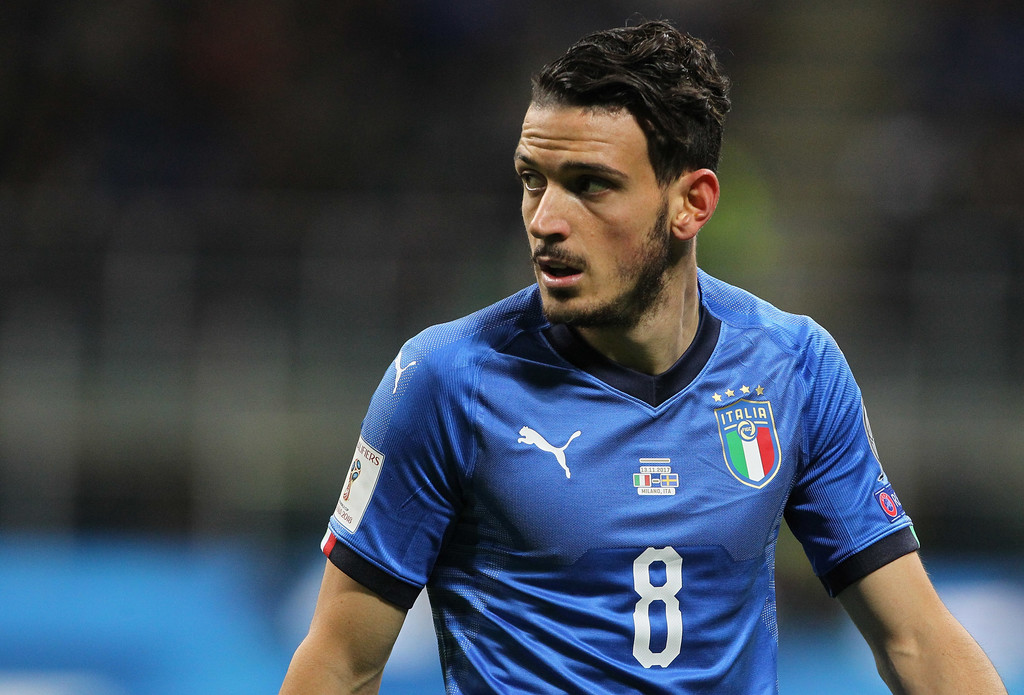 Alessandro Florenzi is an Italian professional footballer who plays as a full-back for the Italy national team. Florenzi started his professional club career with Roma in 2011. At international level he was a member of the Italy national under-21 football team that finished second in the 2013 UEFA European Under-21 Championship, and also represented the Italy senior side at UEFA Euro 2016. Florenzi was appointed as Roma’s new captain following the departure of Daniele De Rossi in 2019. A product of Roma youth academy, Florenzi made his serie A debut in a 3–1 win against sampdora on 22 May 2011, replacing Francesco Totti as a substitute. On 14 November 2012, Florenzi made his debut for the senior team under coach Cesare Prandelli in a friendly match against France. Florenzi was part of the Italy under-21 squad for the 2013 UEFA European Under-21 Championship in Israel, as the Azzurrini reached the final, losing to Spain 4–2. Florenzi’s only goal of the tournament came in the 4–0, group stage, victory over the host nation. On 15 October 2013, Florenzi scored his first senior goal on his competitive debut in a World Cup qualifying match against Armenia that ended in a 2–2 draw at the Stadio San Paolo in Naples. Florenzi was not included in the 30-man preliminary squad named by Cesare Prandelli for the 2014 FIFA World Cup. On 30 August 2014, new Italy head coach Antonio Conte named Florenzi in his first squad for the upcoming European qualifying matches. On 31 May 2016, he was named to Conte’s 23-man Italy squad for UEFA Euro 2016. 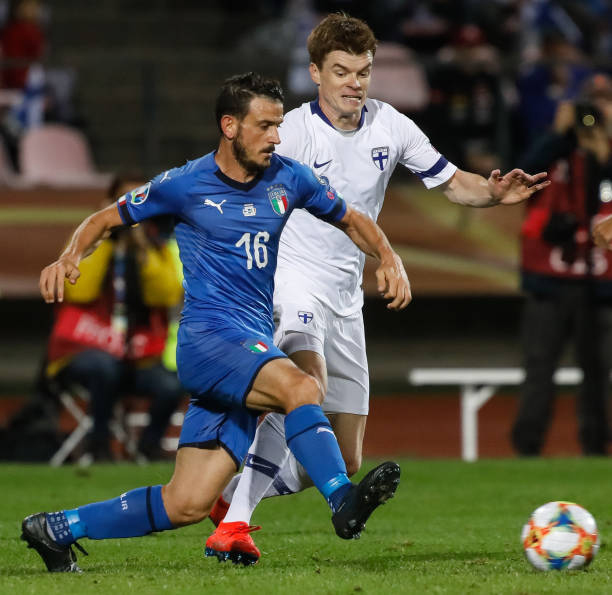 Florenzi is a tenacious, tactically intelligent and well-rounded player who is extremely versatile. Although initially he was usually deployed as a central midfielder, in the “mezzala” role, he is a box-to-box player capable of playing anywhere in midfield, and he has recently also been deployed as a winger, and even as an attacking full-back or wing-back on either flank throughout his career, although he favours the right side. Florenzi is a quick, energetic and hard-working player who is effective at aiding his team both offensively and defensively due to his pace and stamina; when used in more offensive midfield roles, he has also demonstrated an aptitude for making offensive runs. He is gifted with good technical skills, distribution, and crossing ability, and despite his small stature, he is effective in the air; he is also a good striker of the ball, and an accurate set-piece taker. Florenzi has cited Cesc Fàbregas as his role model. During the summer of 2011, Florenzi was sent from A.S.Roma on loan to Serie B club Crotone. He made his debut on 27 August 2011, scoring their goal in a 2–1 home defeat against Livorno. On 22 June 2012, Crotone exercised the option in the loan contract to buy half of the registration rights for €250,000. On 6 July, Roma bought back half of the registration rights for €1.25 million. Florenzi made his first appearance of the 2012–13 Serie A season as a second-half substitute in the 2–2 draw against Catania on 26 August 2012. He made his first start in the 3–1 victory against Internazionale the following week, also scoring his first-ever goal for Roma. Florenzi ended his first full season with the Roma first team, making 36 Serie A appearances and scoring three goals. On 31 July 2013, Florenzi scored and assisted a goal in a 3–1 over the MLS All-stars in the 2013 MLS All-Star Game, and was named the MLS All-Star Game MVP. During the 2013–14 Serie A season, Florenzi helped guide Roma to a second-place finish and a return to Champions League football for the first time since the 2010–11 season. Florenzi also featured in all ten of Roma’s victories from the start of the season, a Serie A record, scoring against Livorno, Parma, Bologna and Inter during the run. On 12 January 2014, Florenzi scored a fantastic, bicycle kick goal to open the scoring in Roma’s 4–0 victory against Genoa. Florenzi played in 36 of Roma’s 38 Serie A fixtures during the season. Florenzi made his first appearance of the 2014–15 Serie A season on 30 August 2014 as a second-half substitute in the 2–0 victory against Fiorentina. He then started the 0–1 away victory against Empoli on 13 September. Florenzi made his Champions League debut as a substitute for the injured Juan Iturbe in the 5–1 group stage victory against CSKA Moscow on 17 September. Florenzi scored his first goal of the season as Roma won 2–0 against Cagliari, having set up Mattia Destro for the opener. On 16 September 2015, Florenzi scored the tying goal from 50 yards out against reigning champions, Barcelona when he spotted the goalkeeper at the edge of his box during the group stage of the Champions League, resulting in a 1–1 draw. The goal was later named one of the three final nominees for the 2015 FIFA Puskás Award. On 26 October 2016, Florenzi suffered an anterior cruciate ligament injury in his left knee during Roma’s 3–1 away win against Sassuolo, causing him to be out for at least four months. On 17 February 2017, Florenzi was ruled out for the rest of the season after suffering a further tear of the same ligament in his first week back in training. On 16 September 2017, he made his return in Roma’s 3–0 home victory over Hellas Verona. 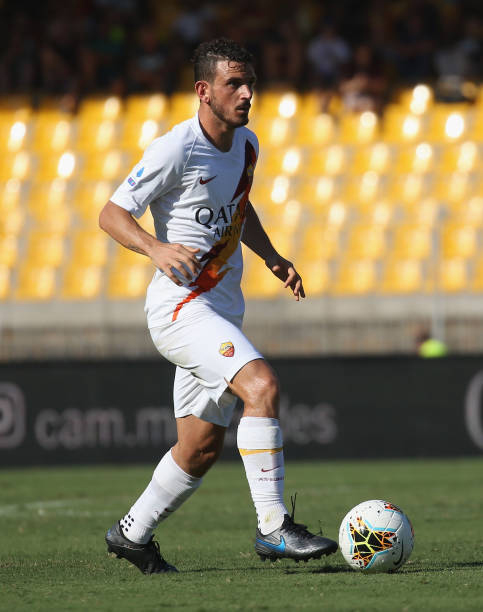 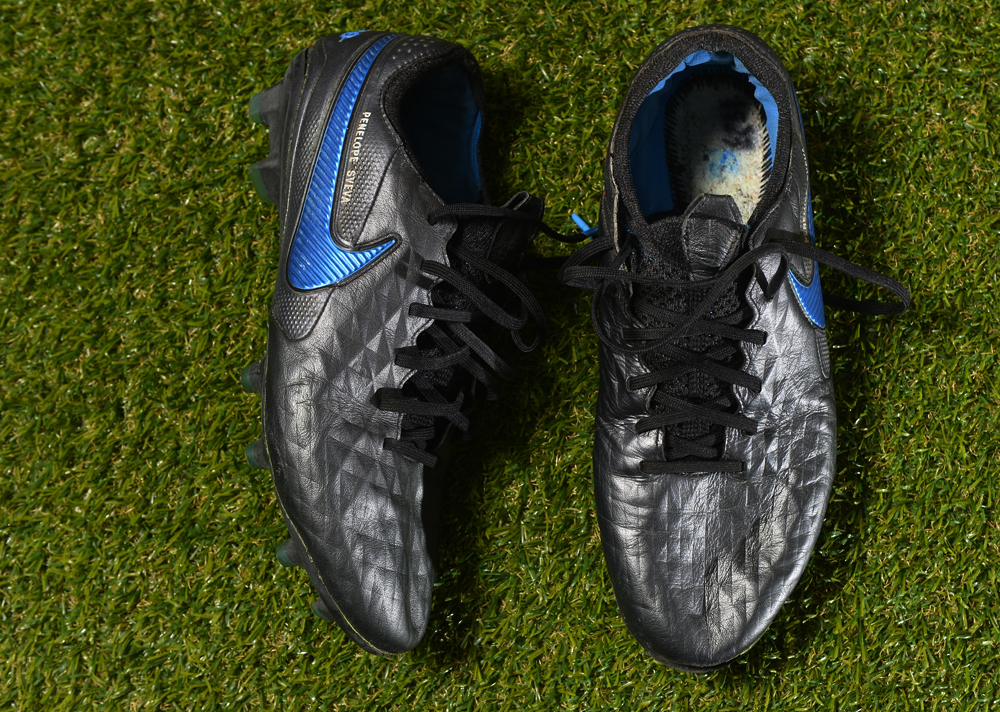 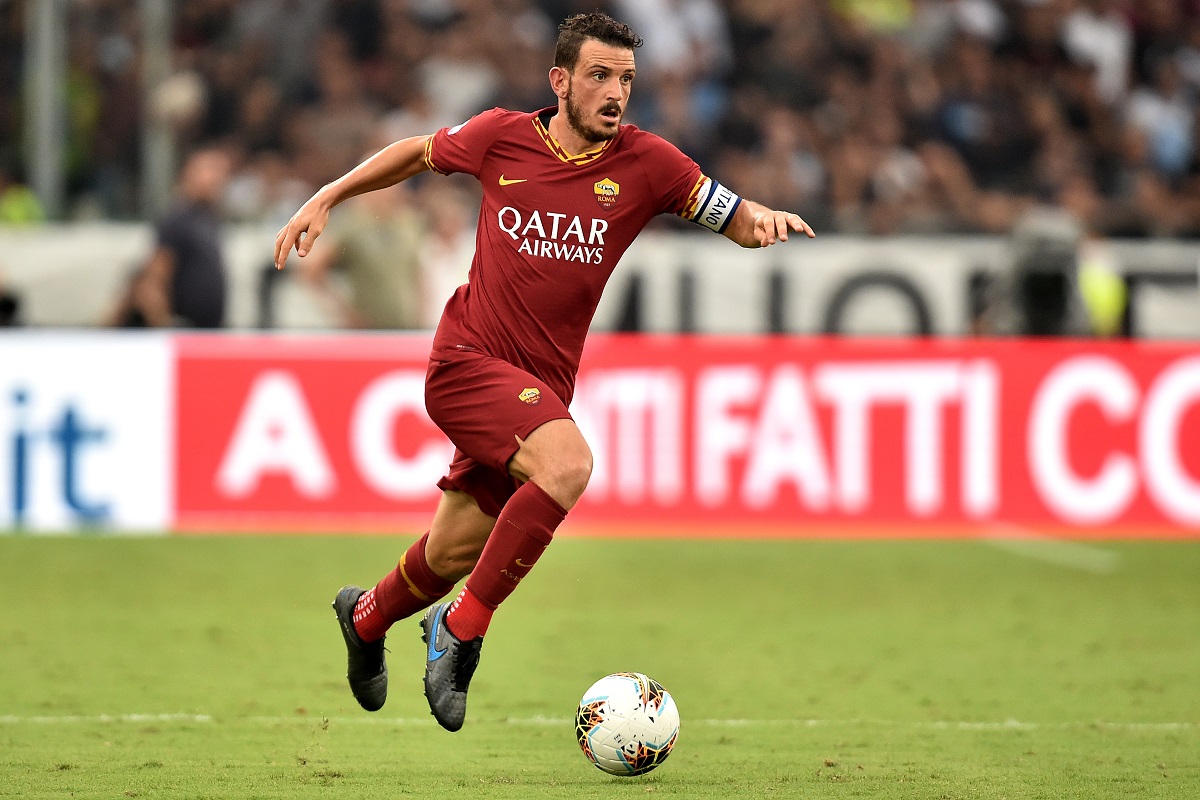 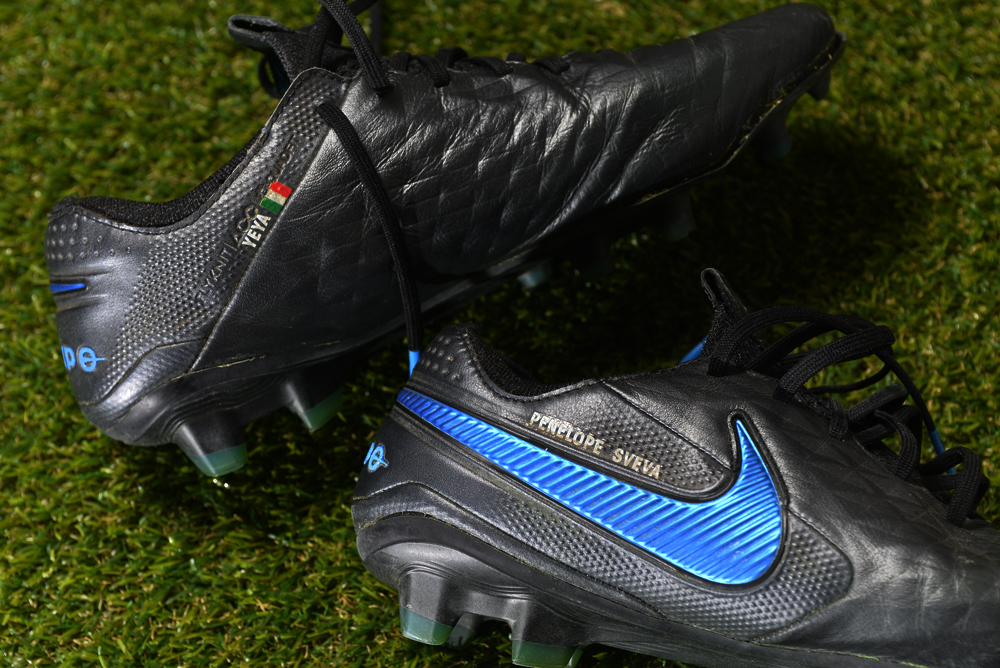 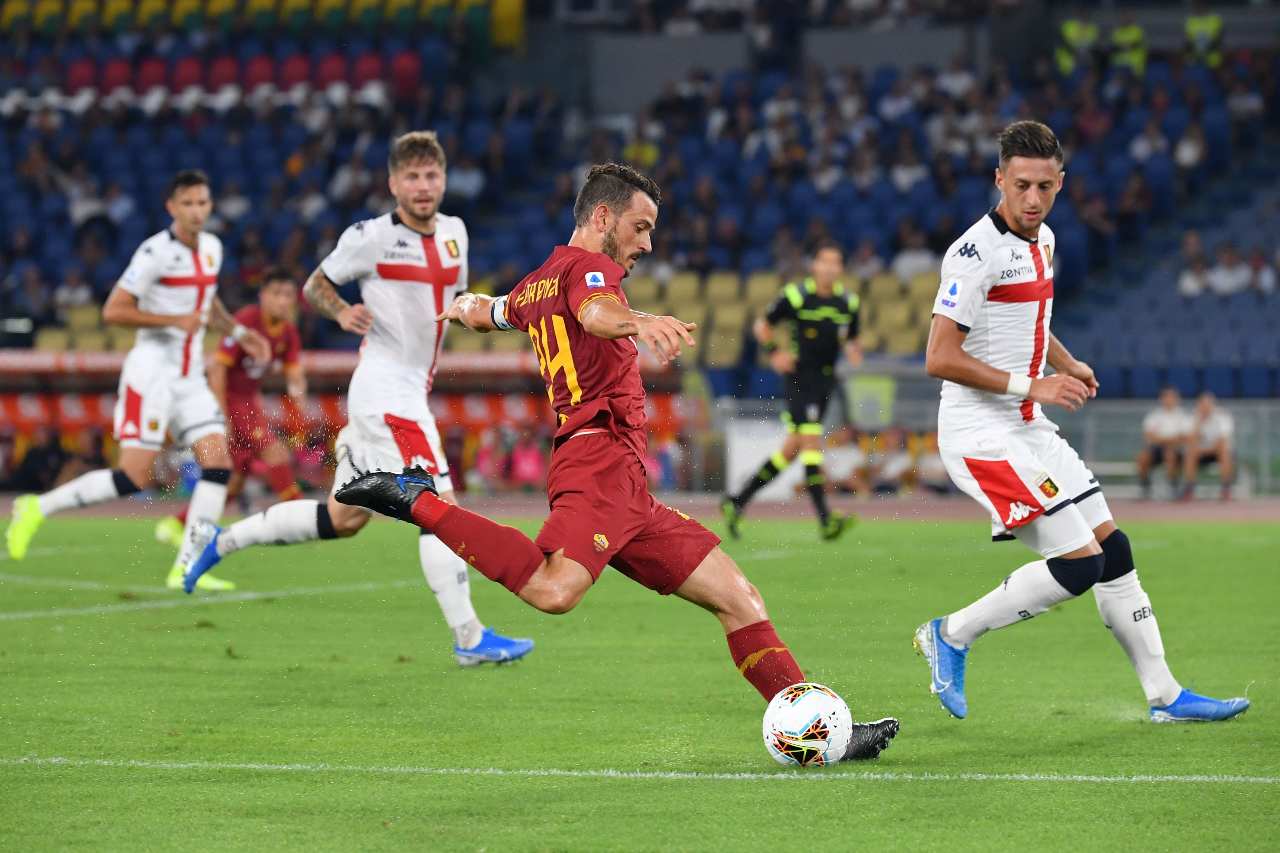 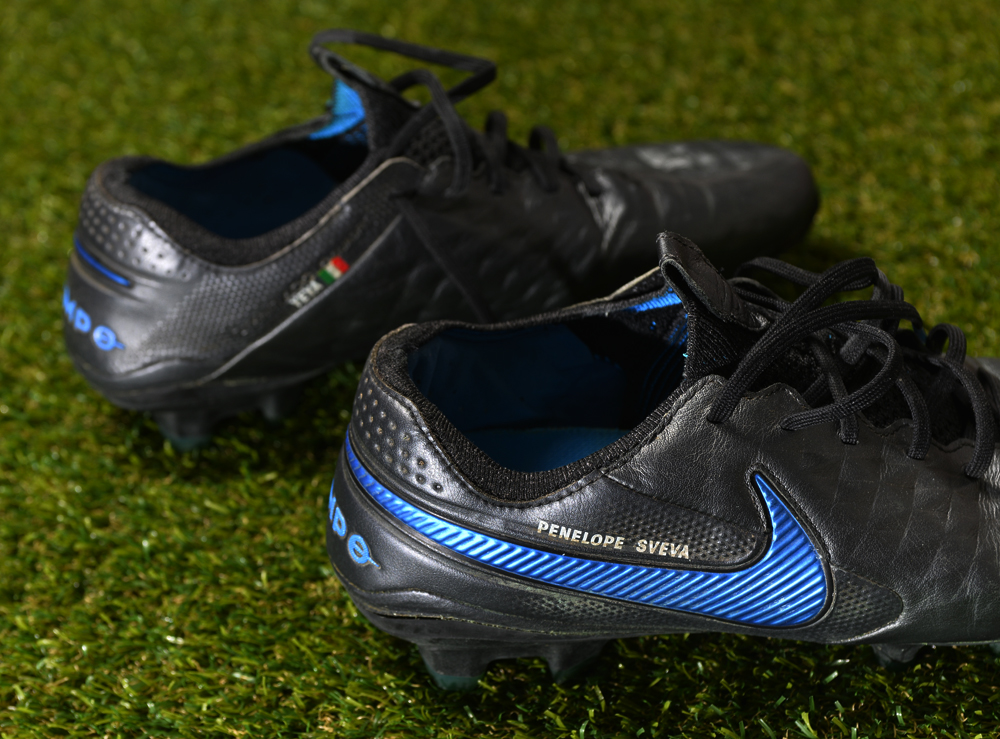 Grosso Grosso2020-10-05T08:16:06+00:00
Page load link
This site uses cookie technology, including third parties' ones. If you want to know more click here. If you access any element of this site outside this banner, you consent to the use of cookies. Ok
Go to Top