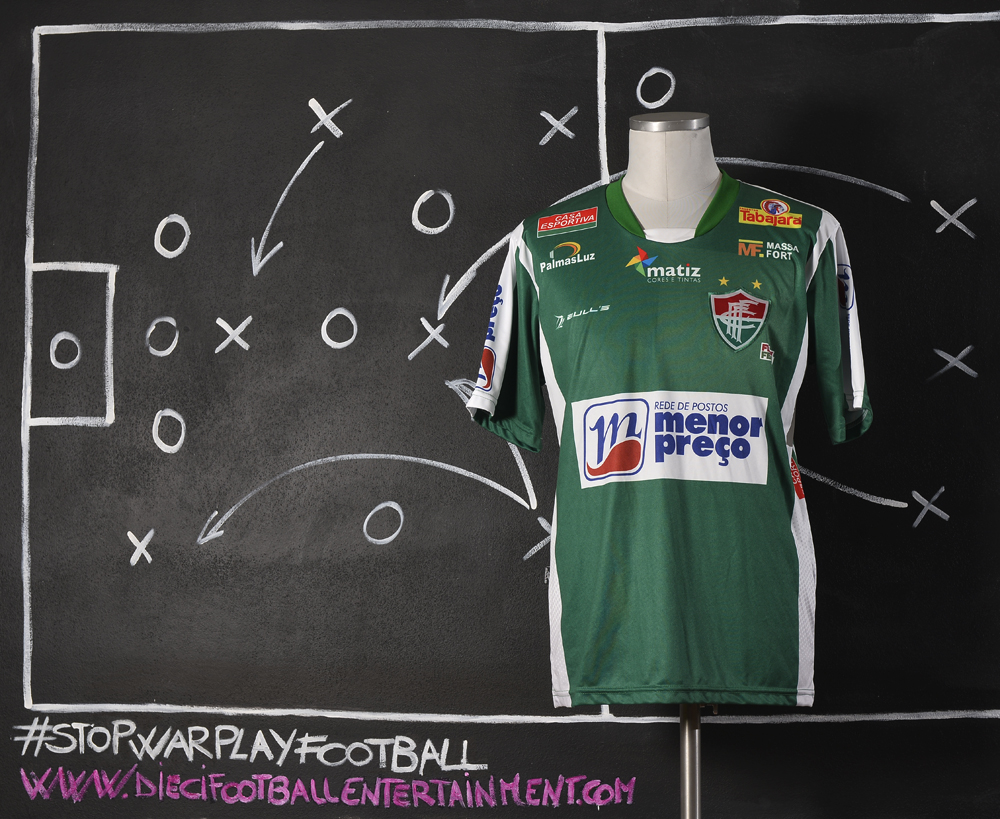 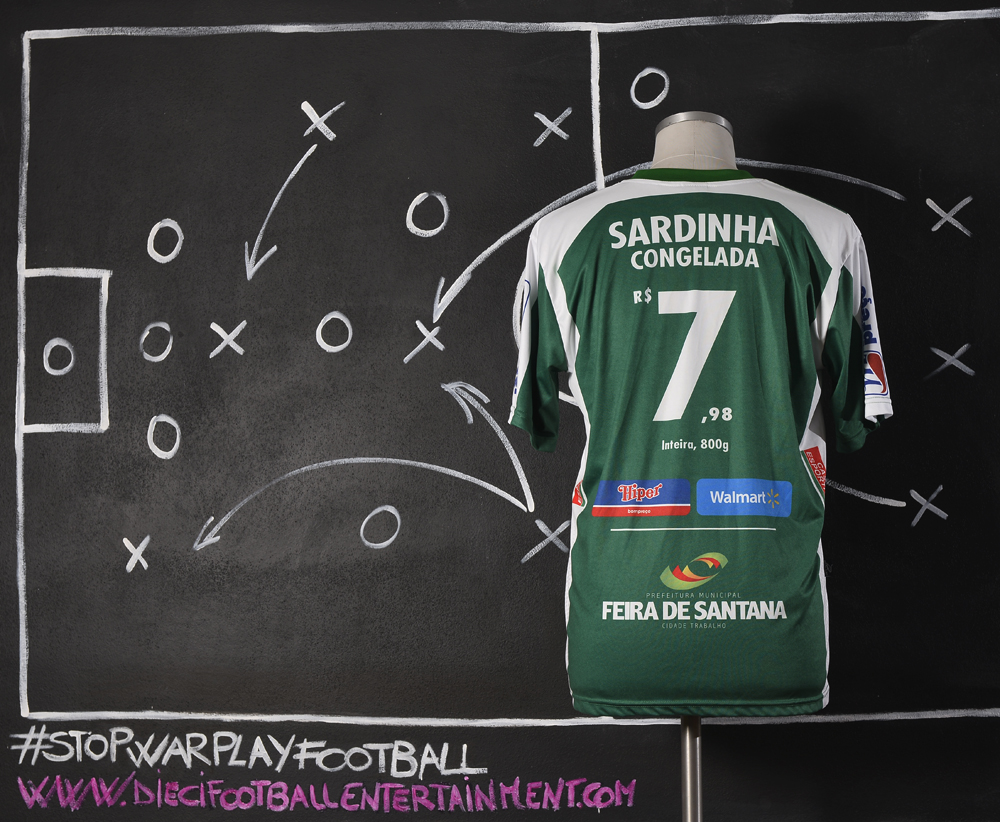 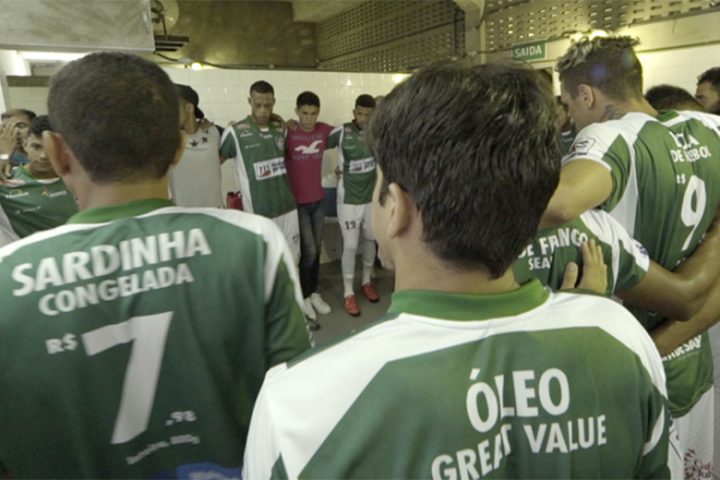 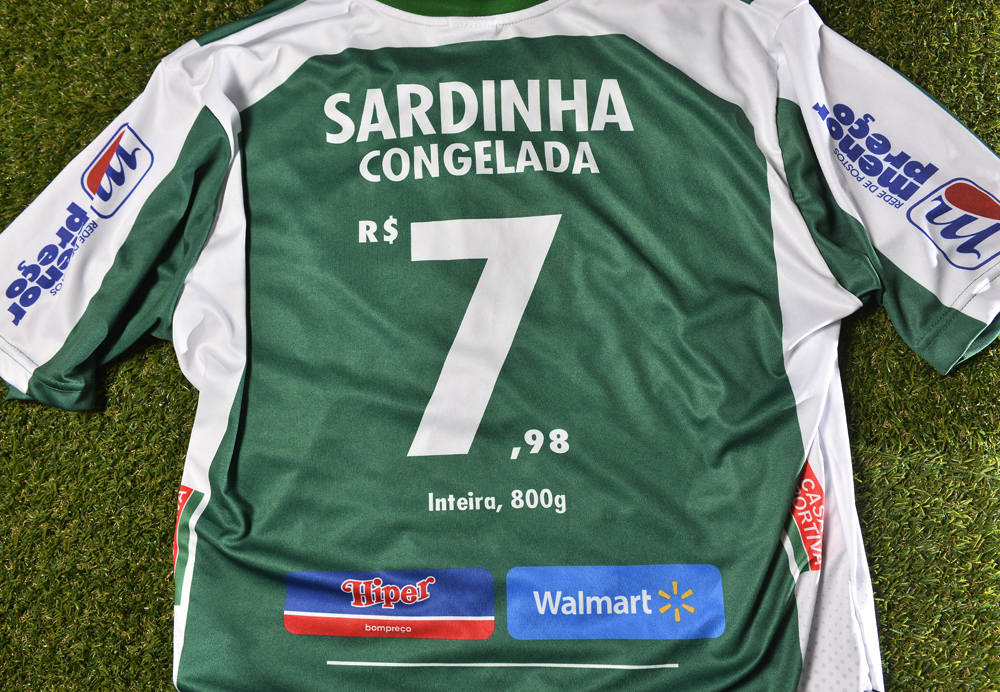 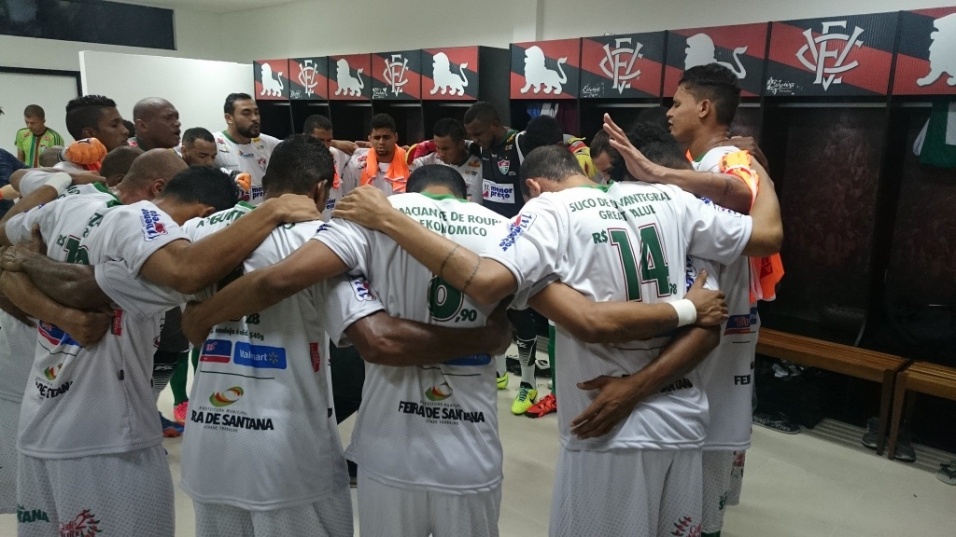 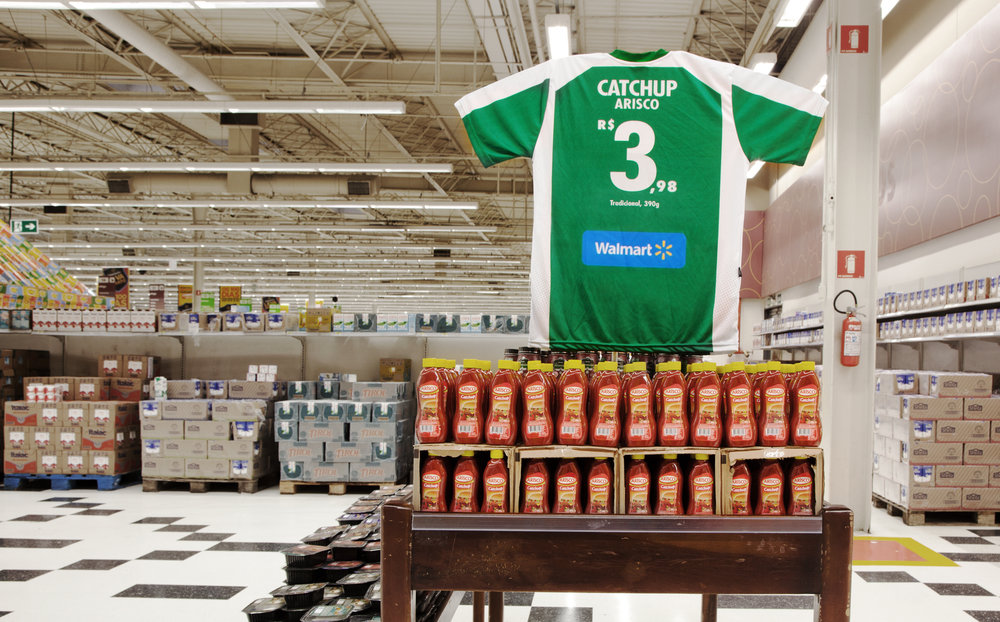 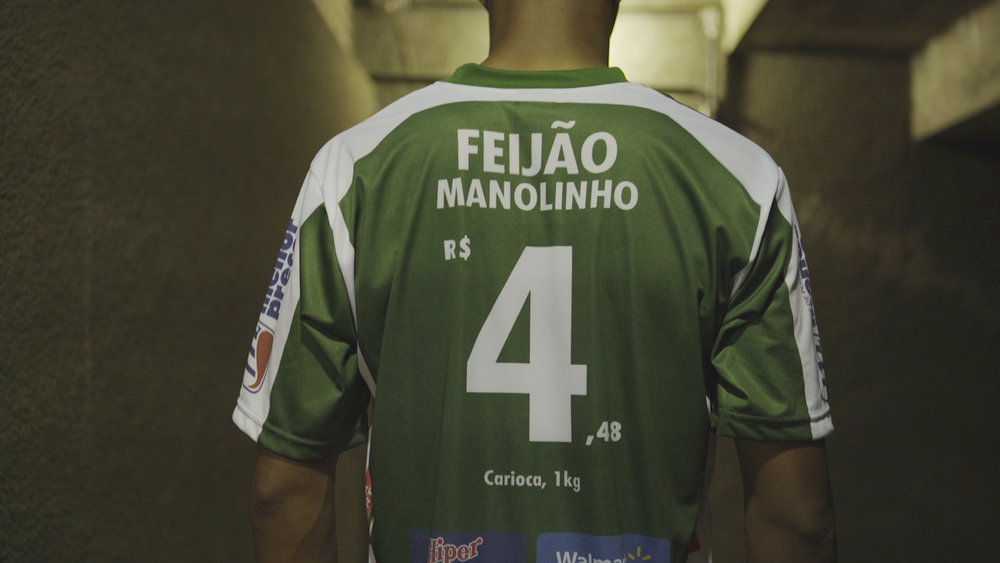 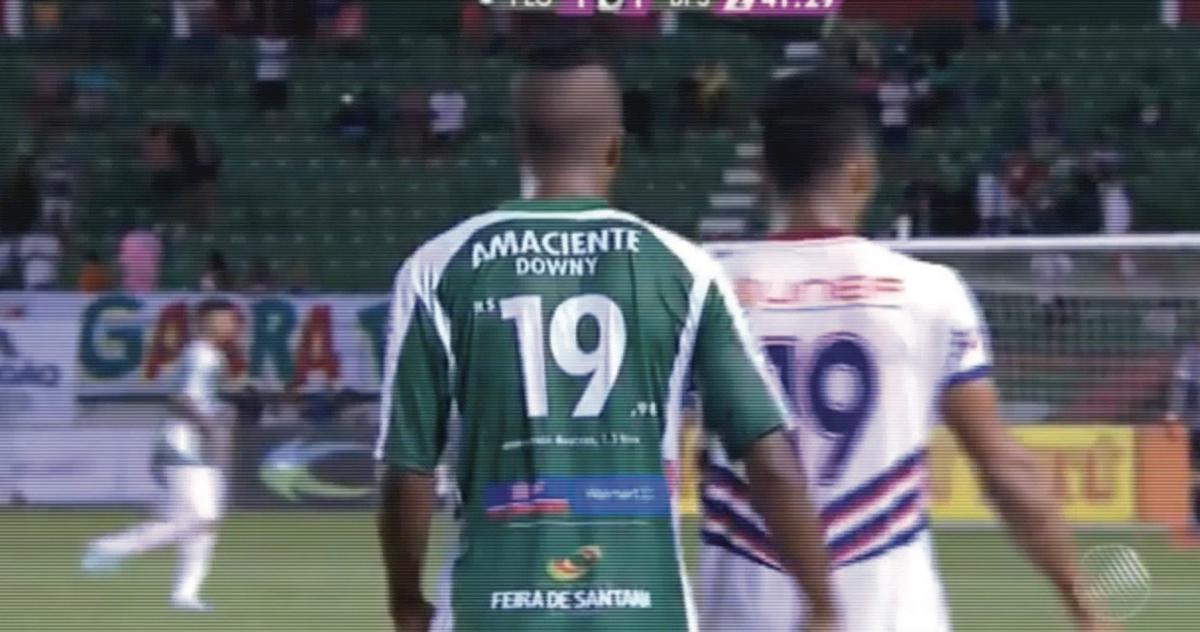 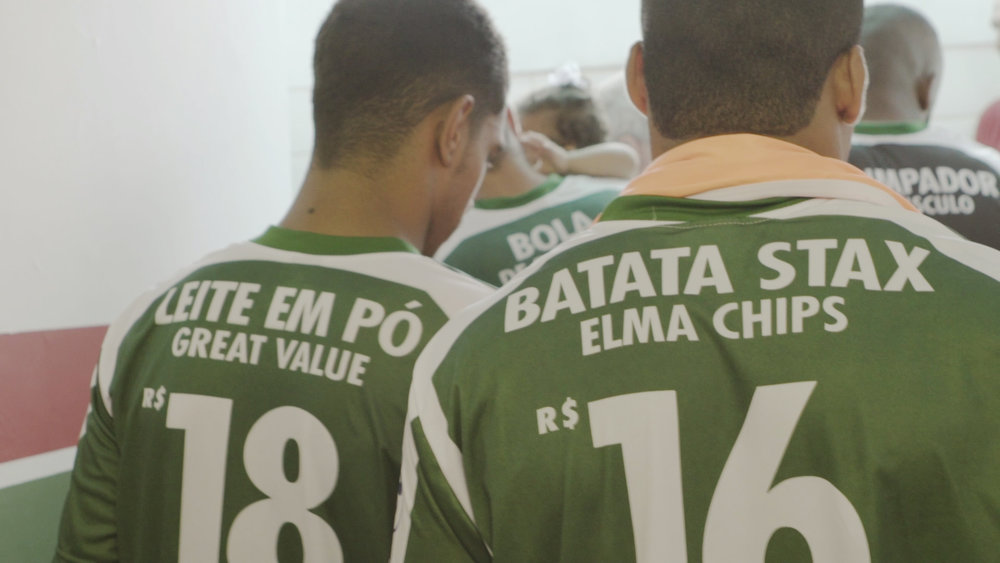 The Fluminense de Feira Futebol Clube is a Brazilian football team from Feira de Santana, Bahia, Brazil, founded on January 1, 1941. In 2017, during the Finals of the Championship, this Brazilian team have taken shirt sponsors to a new level by replacing their own names and squad numbers with items and prices from the local supermarket related to Walmart. This was an unprecedented way to advertise in football, released by Walmart that displayed its offers on player’s shirts, transforming player’s numbers into prices. There was a different offer on each player’s shirt and each week, each player’s shirt displayed a new offer. For example the team’s goalkeeper usually plays wearing number 1, but during this campaign, he wore jersey number $1.58, which was an offer for Spaguetti Vitarella. Or the team’s star player Fernando Sobral revealing the latest deal on a tasty frozen pizza, with his number revealing that it costs 10 Brazilian reales and 98 centavos.The shirt in our collection shows instead an incredible offer of 7,98R$ for the “Sardinha Congelada” (frozen sardines). The shirts were also used inside the Walmart supermarkets to show daily special offers. These shirts were used only for few games at the end of 2017 Championship. The impact of showing Walmart’s offers on player’s shirts extended well beyond the stadium, generating interaction on live, prime time television without additional expenses for this coverage, and on radio, where announcers gave their commentaries of the games using Walmart offers together with players’ names. A surely incredible advertising for Walmart but for the team as well since this campaign was noticed all over the globe. 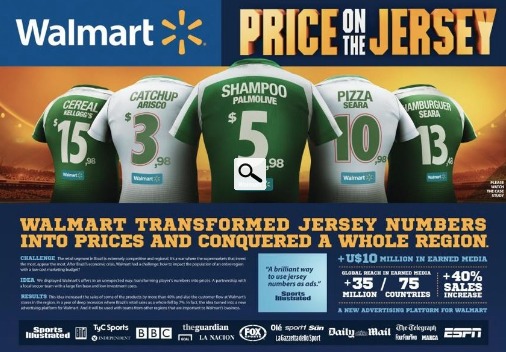 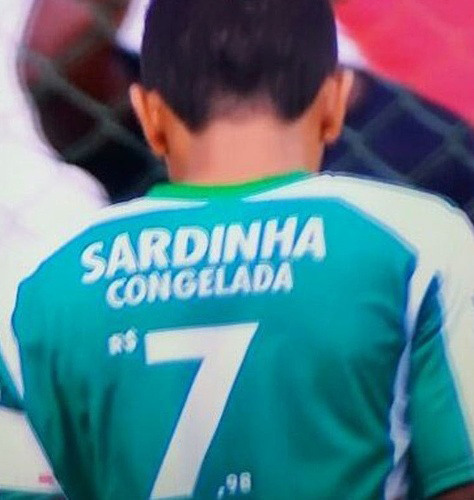 Grosso Grosso2019-02-11T21:04:17+00:00
Page load link
This site uses cookie technology, including third parties' ones. If you want to know more click here. If you access any element of this site outside this banner, you consent to the use of cookies. Ok
Go to Top