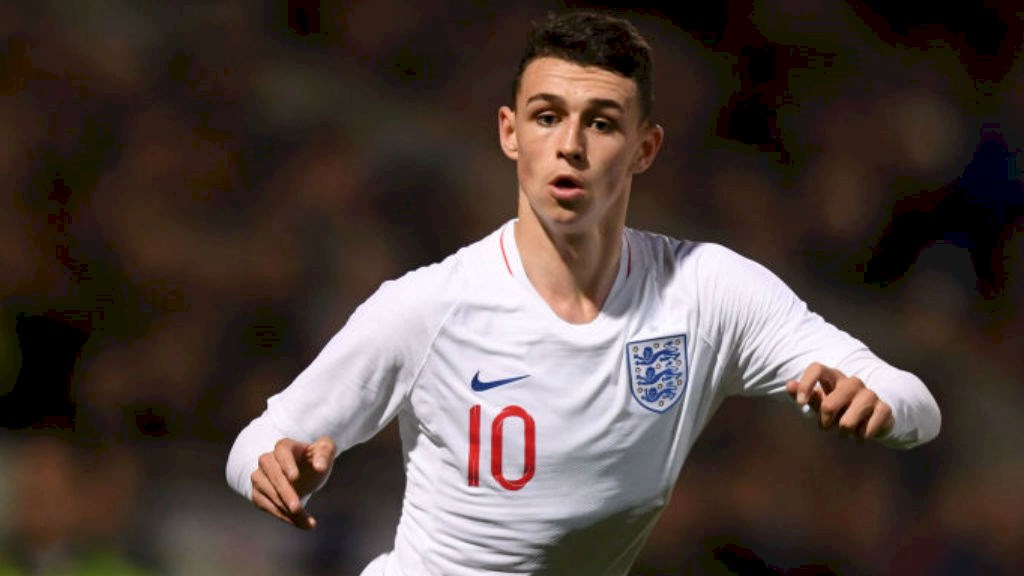 Philip Walter Foden is an English professional footballer who plays as a midfielder for the English national team. Foden’s breakthrough into professional football came in 2017 when he won the FIFA U-17 World Cup Golden Ball award following England’s successful campaign. He made his debut for City during the same year and in December was named BBC Young Sports Personality of the Year. Foden has since made over 35 appearances for the club, winning five major honours including becoming the youngest recipient of a Premier League winners’ medal. In 2019, he won a second Premier League and became the club’s youngest-ever goalscorer in the UEFA Champions League, and is the youngest English player to both start a match and score in the knockout stages of the competition. 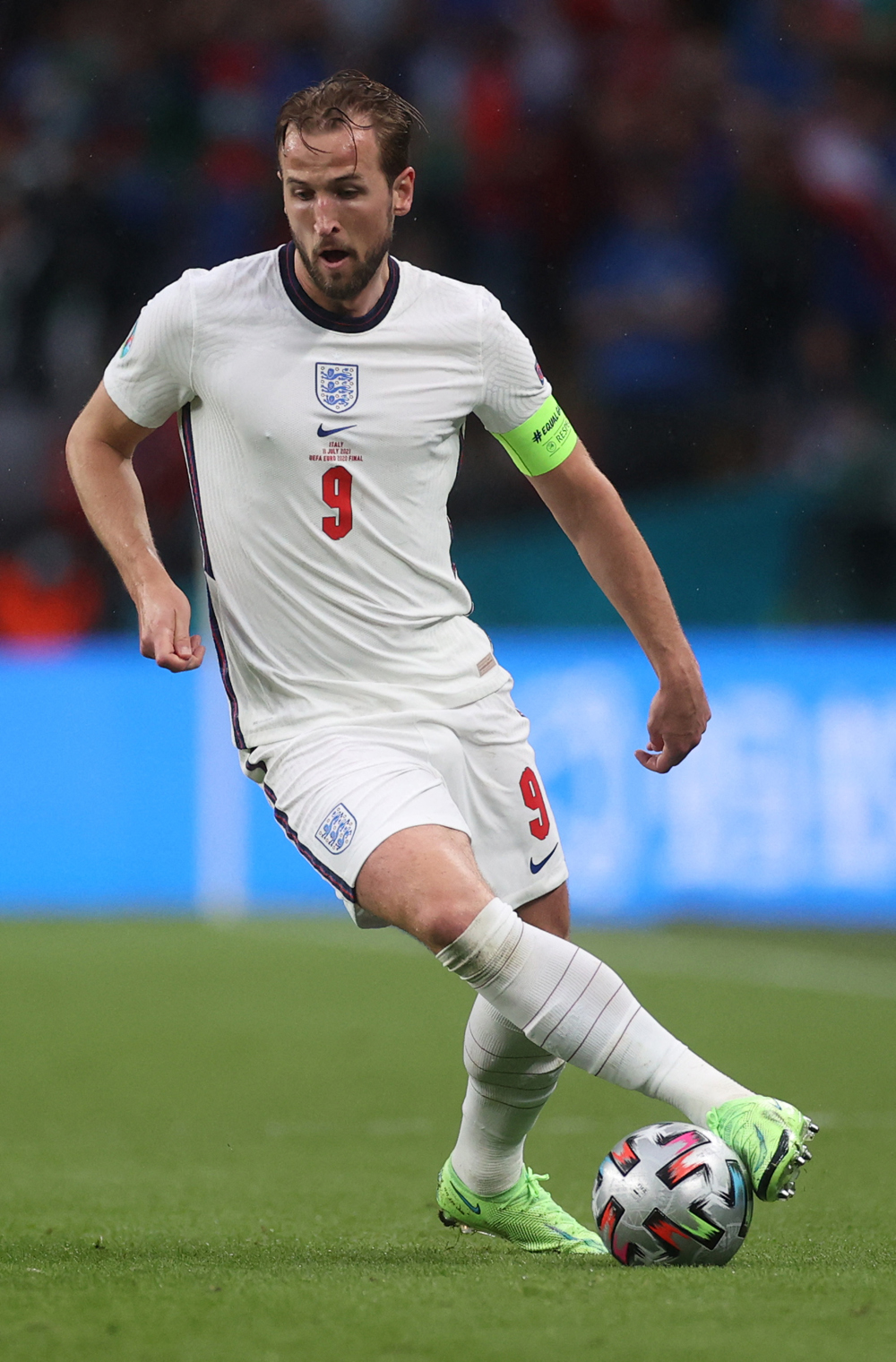 This shirt was issued for Phil Foden for the “EURO 2020” Final shirt between England and Italy. Phil Foden has played in three Euro 2020 matches but he had to miss the Final after picking up a minor foot injury. The UEFA Euro 2020 Final was a football match that took place at Wembley Stadium in London, England, on 11 July 2021 to determine the winner of UEFA Euro 2020. It was the 16th final of the UEFA European Championship, a quadrennial tournament contested by the senior men’s national teams of the member associations of UEFA to decide the champions of Europe. Originally scheduled for 12 July 2020, the tournament had been postponed due to the COVID-19 pandemic in Europe. In front of a crowd of 67,173, Italy won their second European Championship, beating final debutants England 3–2 in a penalty shoot-out following a 1–1 draw after extra time. England’s Luke Shaw opened the scoring in the second minute of the match, the fastest goal ever scored in a European Championship final, only for Leonardo Bonucci – who was later named the man of the match – to equalise midway through the second half. England had a 2–1 advantage in the shoot-out after two kicks each, only for their last three takers to miss, allowing Italy to come back and win 3–2. It was Italy’s first major title since the 2006 FIFA World Cup and their first European Championship since winning it on home soil in 1968; it put them level with France and only one title behind Spain and Germany. England became the third nation in the 21st century to lose the European Championship final on home soil after Portugal in 2004 and France in 2016. After the match, England’s unsuccessful penalty takers (Marcus Rashford, Jadon Sancho and Bukayo Saka) were subjected to racial abuse on social media. The event was also marred by crowd disorder and incidents of violence before and after the game. On 1 June 2021 Foden was named in the 26-man squad for the newly rescheduled UEFA Euro 2020. He joined up with the squad at a later date due to his participation in that year’s UEFA Champions League Final. On 8 June, Foden revealed that he had dyed his hair blonde – drawing comparisons to former England midfielder Paul Gascoigne who also had a similar haircut for Euro 96. Foden said in a press conference on the same day that “The full nation know what he means to the country and what he did, so it won’t be too bad if I try to bring a bit of Gazza on to the pitch.” 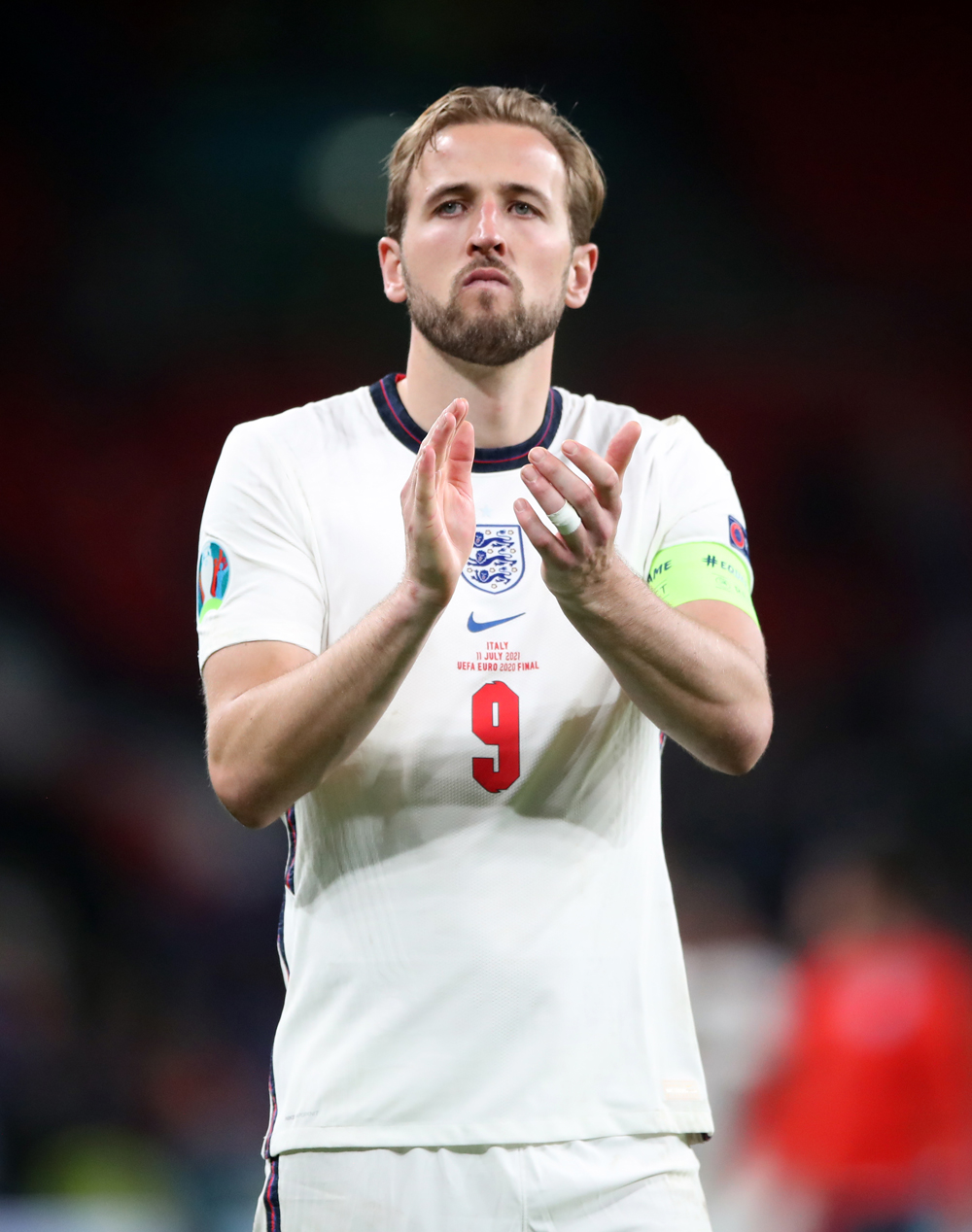 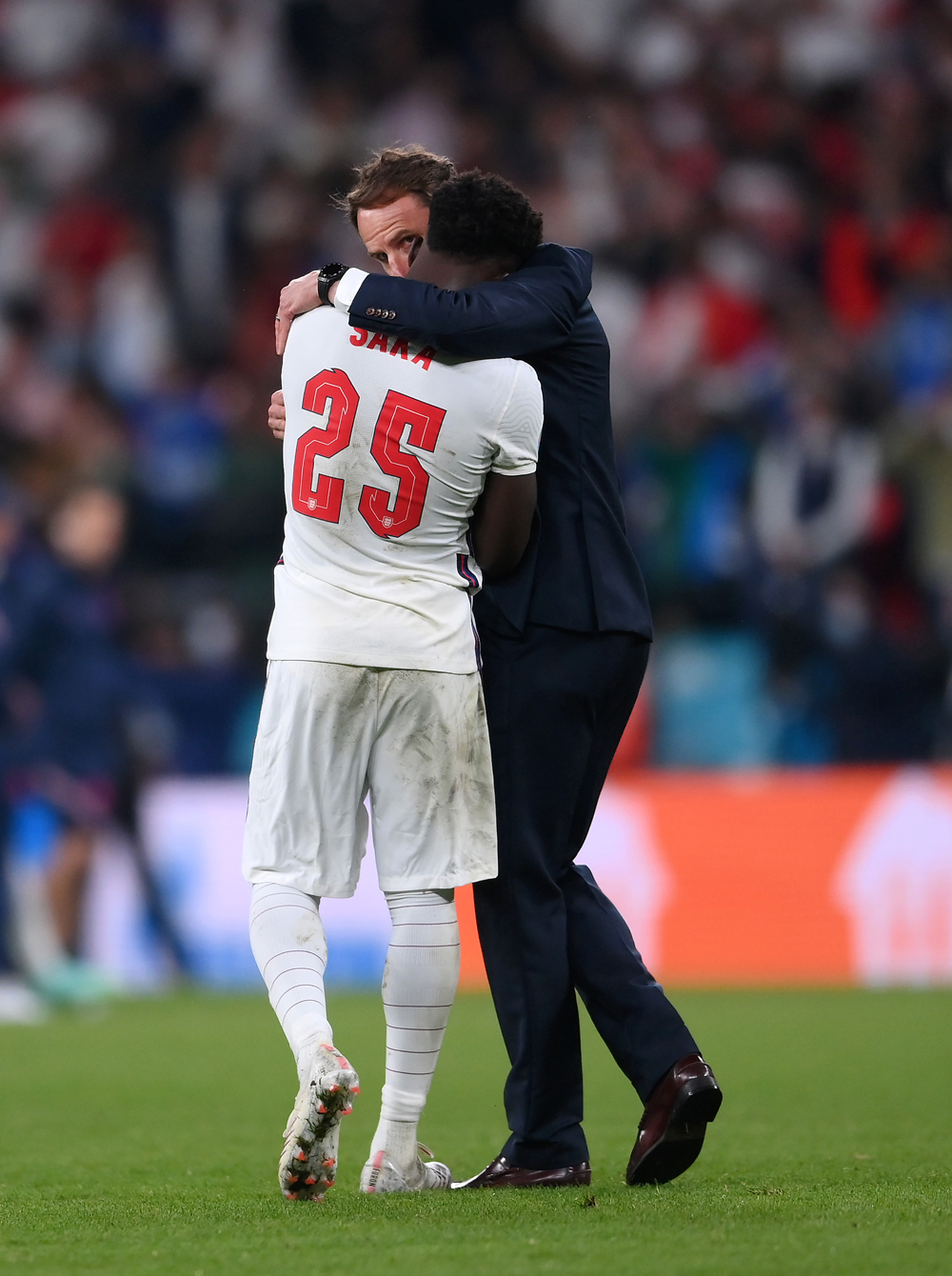 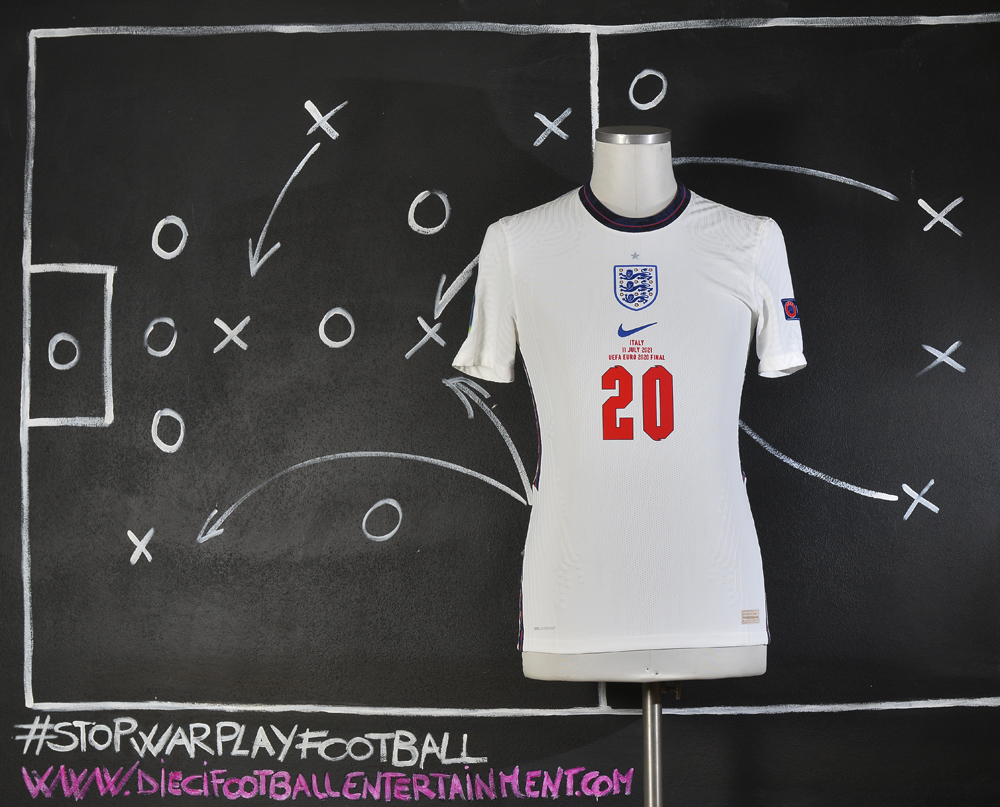 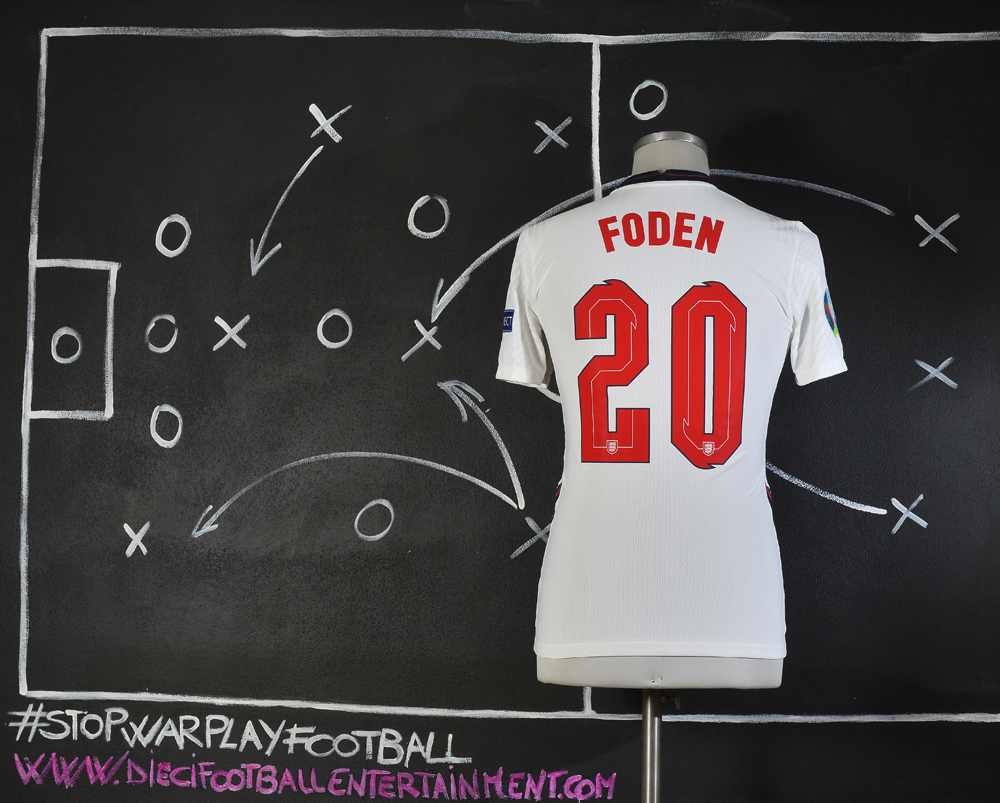 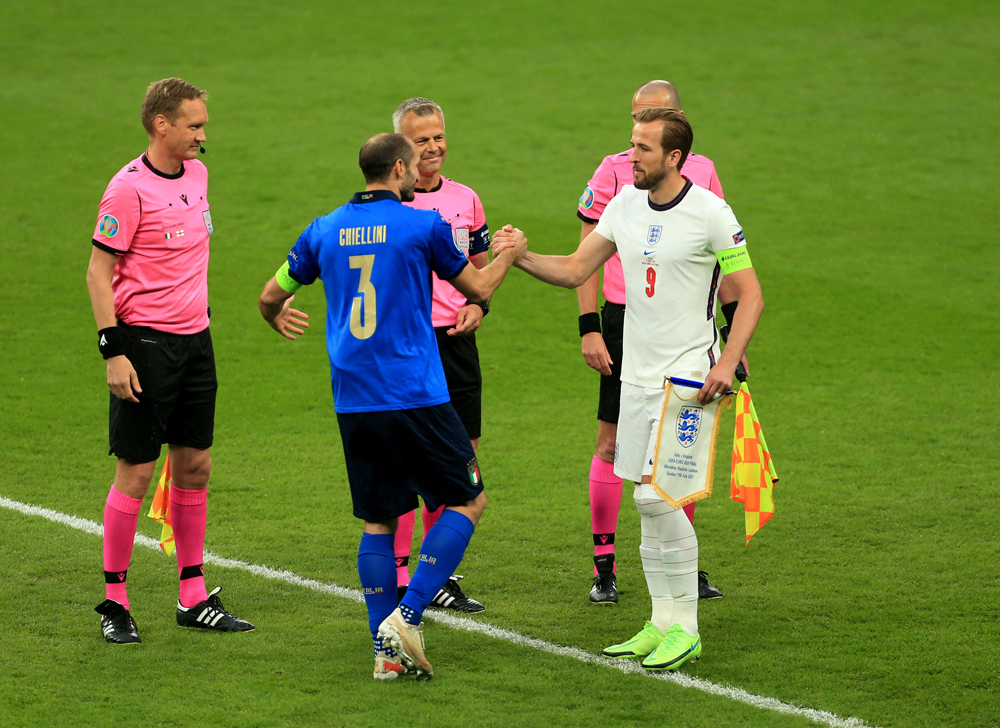 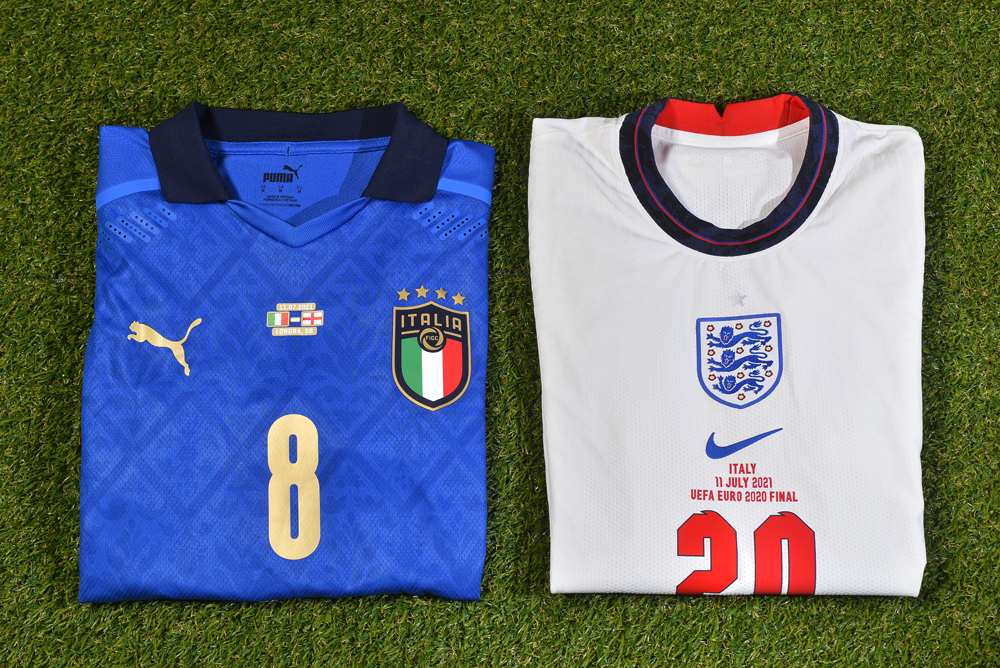 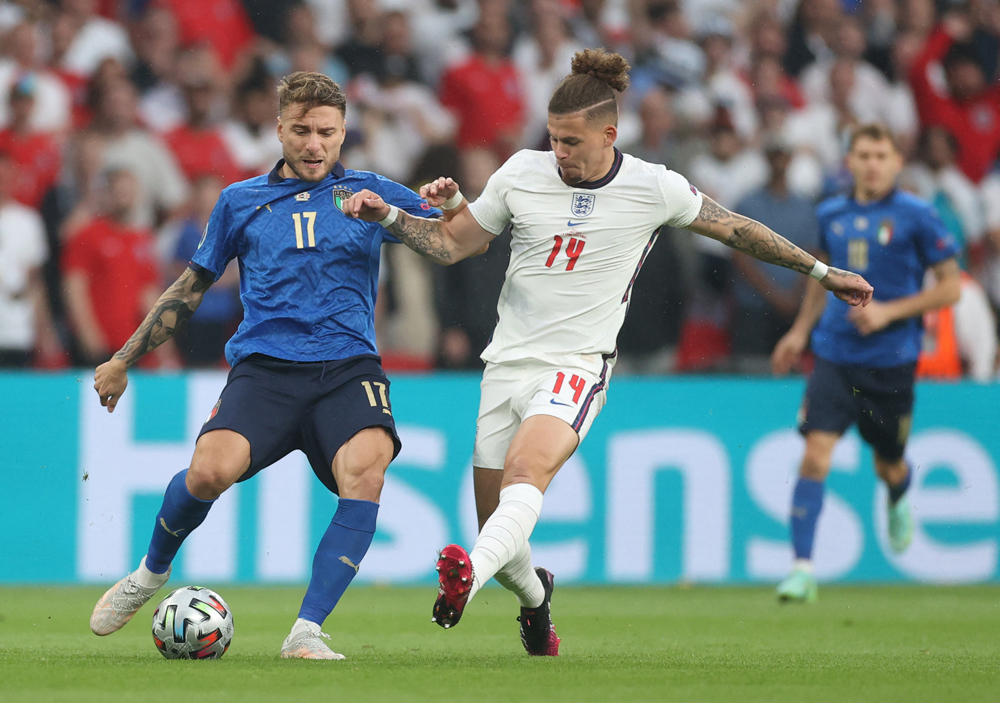 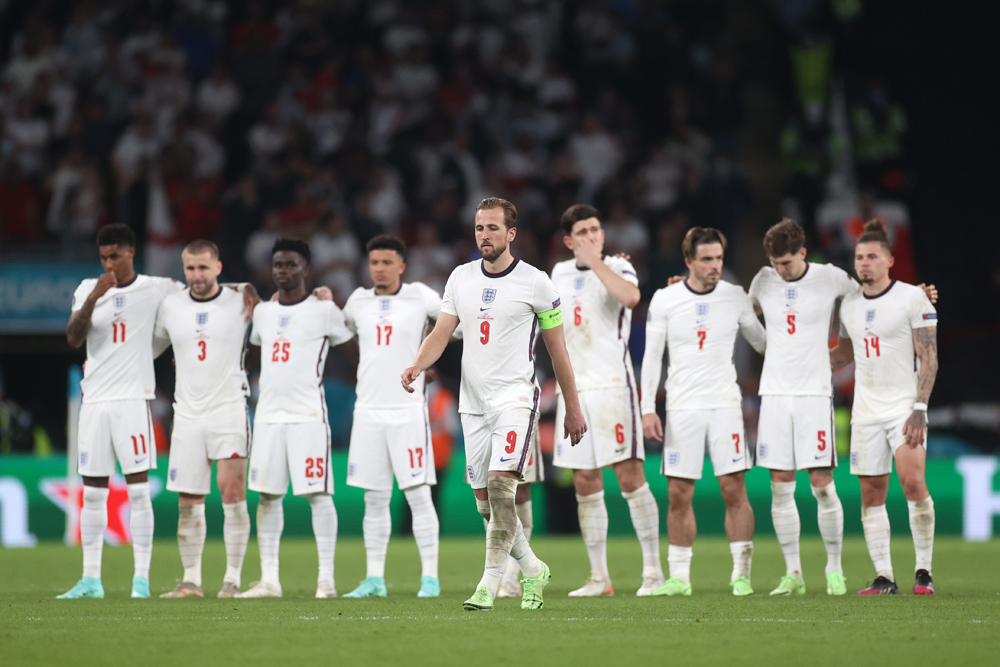 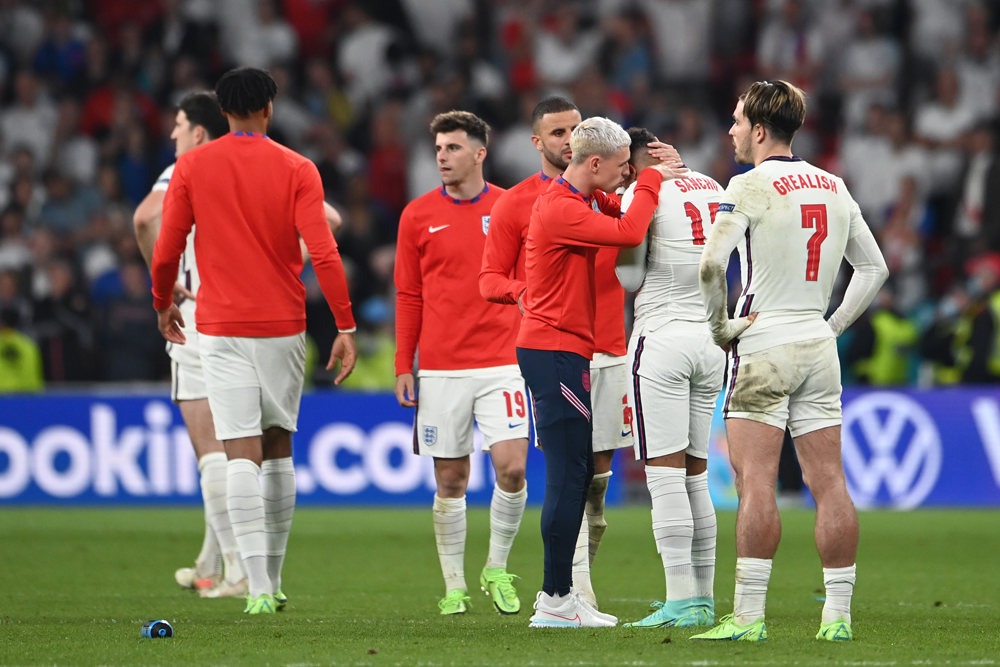 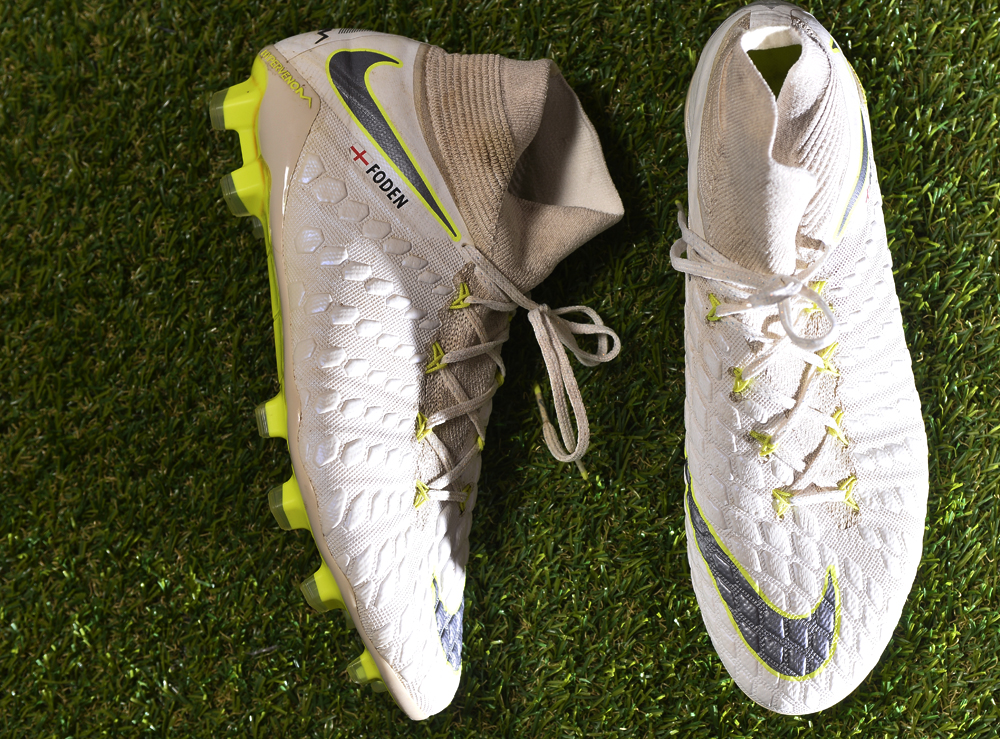 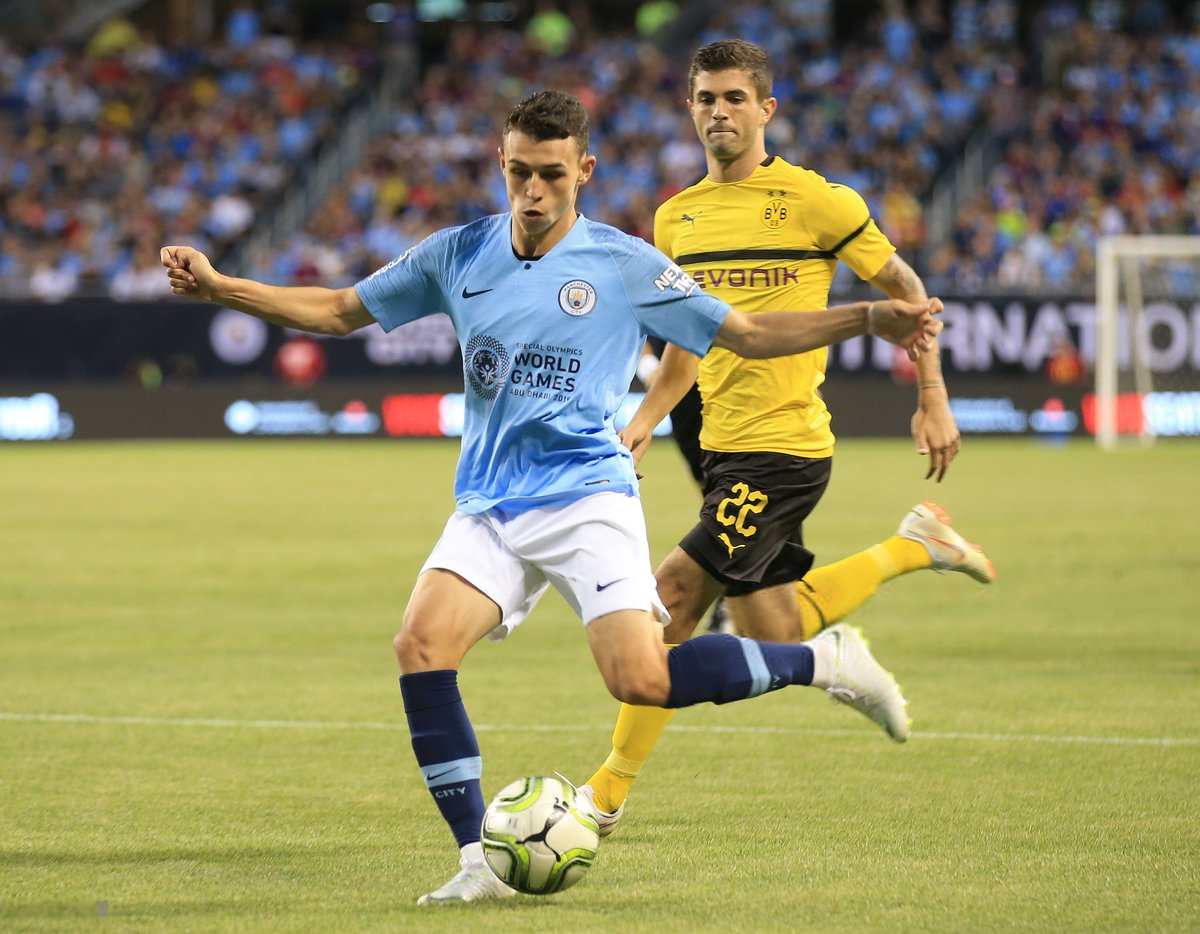 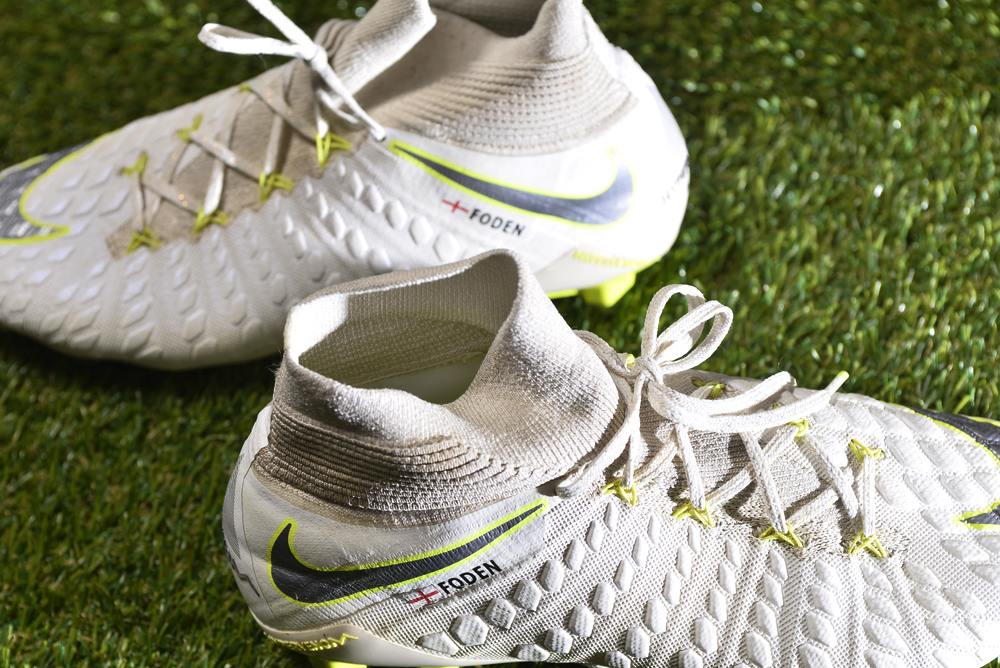 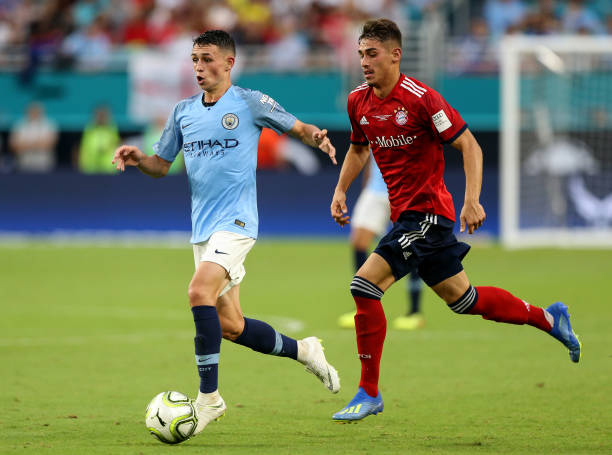 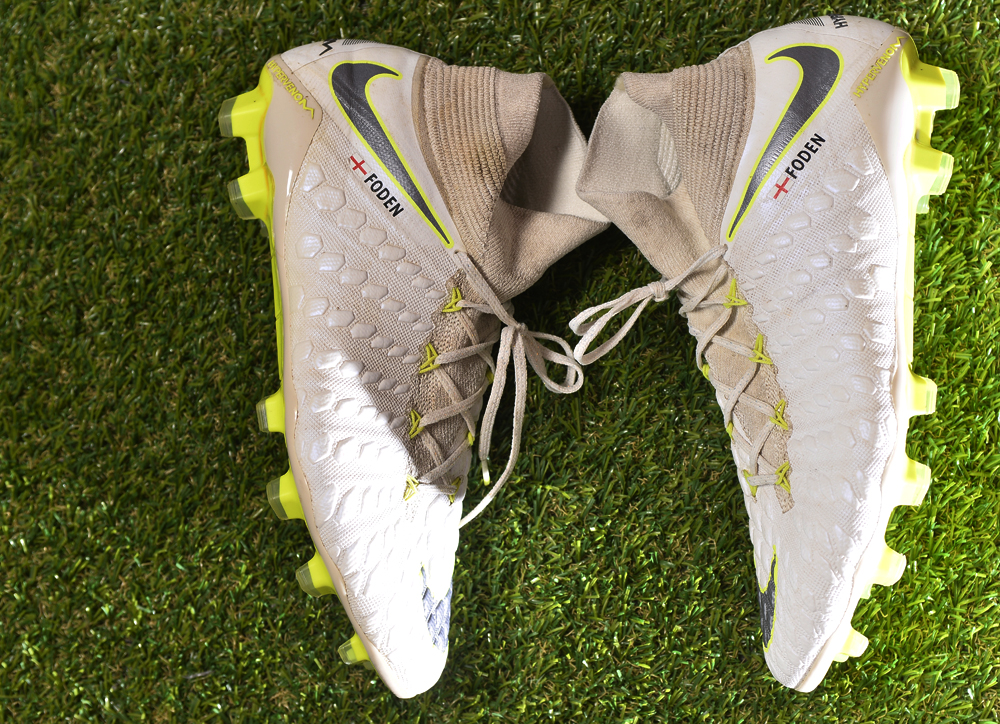 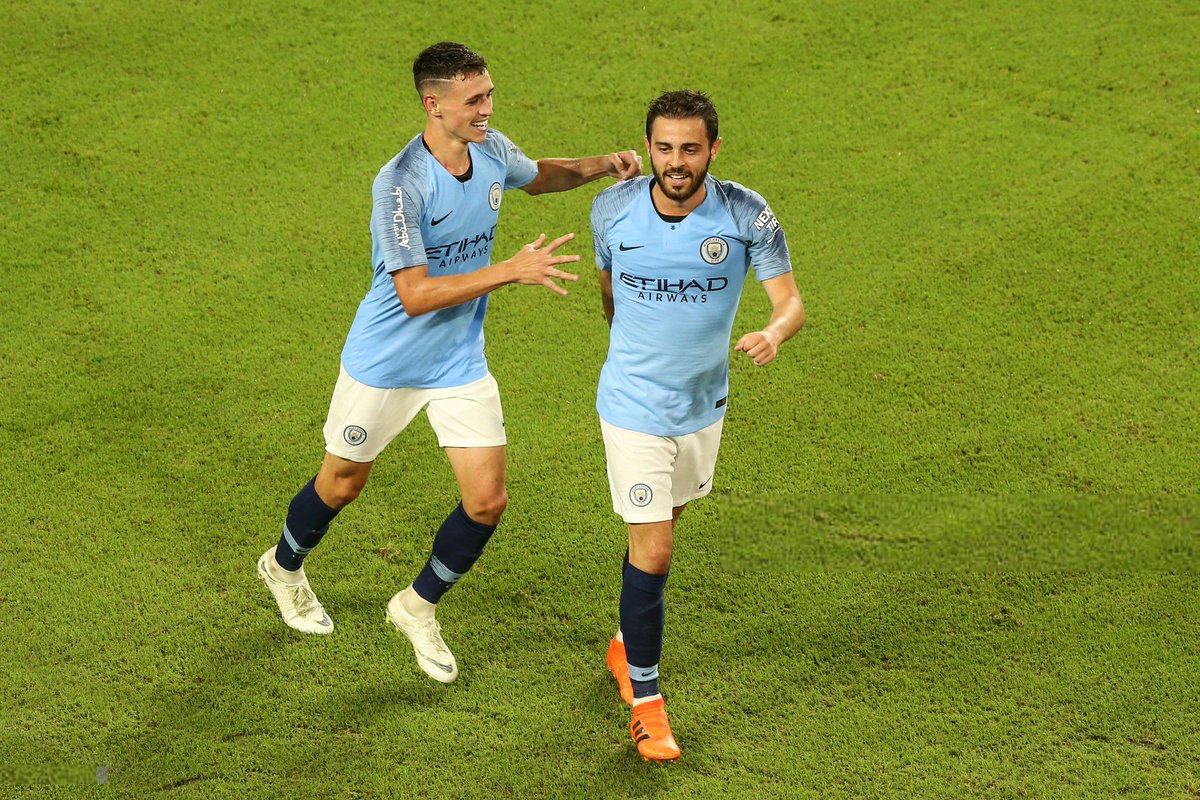 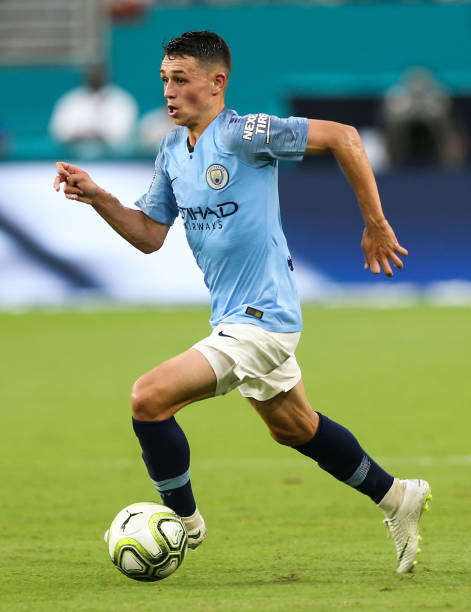 Foden is left-footed, and can play as a wing-back, or a winger on the right, though Pep Guardiola has described him as “more of a midfielder”. In 2017, Guardiola described him as “a special player”, saying: “It’s dangerous to say good things about young players because they are still young, and they have to grow and they have to learn many, many things… But we have a lot of confidence to help him, because we believe he is a guy who has potential, even if he’s not strong, he’s not tall.” In 2017, Louise Taylor of The Guardian described Foden as “boasting tight, adhesive control and blessed with the knack of drifting past opponents”. In 2018, veteran football writer Brian Glanville described him as a “gifted and precocious teenager”, adding: “Young players of his skill and inventive quality are pitifully thin on the ground.” Foden won the FIFA U-17 World Cup Golden Ball award in 2017 where he also gained some widespread press attention and significant media coverage. Born in Stockport, Greater Manchester and a boyhood supporter of Manchester City, he joined at the age of eight and signed his Academy scholarship in July 2016. He was privately educated at St Bede’s College, with his tuition fees being paid for by Manchester City. On 6 December 2016, City head coach Pep Guardiola included Foden in the matchday squad for the Champions League group stage match with Celtic; he was an unused substitute in the 1–1 home draw. In July 2017, Foden was included in Manchester City’s squad for the club’s pre-season tour of the United States, where he performed impressively in a 0–2 loss to Manchester United and also started in a 4–1 win over Real Madrid. Guardiola stated after the Manchester United match: “It’s a long time since I saw something like this. His performance was another level. He’s 17-years-old, he’s a City player, he grew up in the academy, he loves the club, he’s a City fan and for us he’s a gift.”After making several appearances on the bench at the start of the 2017–18 season, Foden made his Manchester City debut on 21 November 2017 in a Champions League game against Feyenoord, coming on in the 75th minute for Yaya Touré. He became the fourth youngest English player to make an appearance in the Champions League (17 years 177 days). On 6 December 2017, Foden broke the record previously held by Josh McEachran to become the youngest English player, at the age of 17 years and 192 days, to start in a UEFA Champions League match, doing so in a 2–1 defeat to Shakhtar Donetsk. He also became the first player born in the year 2000 to start a match in the competition. He made his Premier League debut as a substitute in a 4–1 win against Tottenham Hotspur on 16 December 2017, appearing at the 83rd minute for İlkay Gündoğan. Foden featured as a late substitute for Sergio Agüero in the EFL Cup Final on 25 February 2018, helping City secure a 3–0 victory against Arsenal at Wembley Stadium. The following month, he broke Kieran Richardson’s record to become the youngest English player to start in a knockout-match in the Champions League, doing so at the age of 17 years and 283 days in a 4–0 win over Basel. On 13 May, he became the youngest ever player to receive a Premier League winners’ medal. Foden was part of the City’s starting line-up for the FA Community Shield on 5 August 2018, playing a total of 75 minutes as well as assisting Agüero’s first goal of the game in a 2–0 victory over Chelsea at Wembley Stadium, marking Foden’s third winners’ medal of the calendar year. On 25 September 2018, he provided an assist to Riyad Mahrez and later scored his first senior goal in injury time to secure City a 3–0 away win against Oxford United in the third round of the EFL Cup. Foden scored his first home goal at the Etihad Stadium, netting the second for City during their 7–0 victory against Rotherham United in the third round of the FA Cup on 6 January 2019. Three days later, Foden was again on the scoresheet as he helped City defeat Burton Albion 9–0 in the first leg of the EFL Cup semi-finals. On 12 March 2019, Foden scored his first Champions League goal during the second leg of the last-16 tie against Schalke, as City won 7-0 (10-2 on aggregate). In doing so, he helped the club equal the record for the largest winning margin in the knockout-phase of the competition. His goal also saw him become Man City’s youngest-ever goalscorer in the Champions League and the youngest English goalscorer to score in the knock-out stages of the competition, aged 18 years and 288 days. At the start of the following month, he made his first league start for the club in a 2–0 win over Cardiff City, becoming the youngest English player to do so since Daniel Sturridge in 2008. After the match, City manager Pep Guardiola told media that he expected Foden to be an important Manchester City player “for the next decade”. Foden scored his first Premier League goal on 20 April 2019, with the only goal in a 1–0 victory over Tottenham Hotspur. Upon doing so, he became the third youngest player to score for the club in the Premier League, after Micah Richards and Sturridge.

Grosso Grosso2021-10-13T10:00:09+00:00
Page load link
This site uses cookie technology, including third parties' ones. If you want to know more click here. If you access any element of this site outside this banner, you consent to the use of cookies. Ok
Go to Top