Gervais Yao Kouassi, better known as Gervinho, is an Ivorian footballer who plays as a forward for Italian club Parma and the Ivory Coast national team. Gervinho began his career at ASEC Abidjan and Toumodi, before moving to Belgium in 2004 to play for Beveren. Between 2007 and 2011, he played in the French Ligue 1, initially at Le Mans and then at Lille. In his final season in France, he helped his club win the league and the Coupe de France. He was sold to Arsenal in 2011 for £10.8 million and moved to Roma in 2013 for €8 million. In January 2016, Gervinho moved to Hebei China Fortune. In August 2018, he joined Parma Calcio 1913. Gervinho has made over 80 appearances for the Ivorian national team from his debut in 2007, scoring 22 goals. He was part of their squads at five Africa Cup of Nations tournaments and two World Cups. 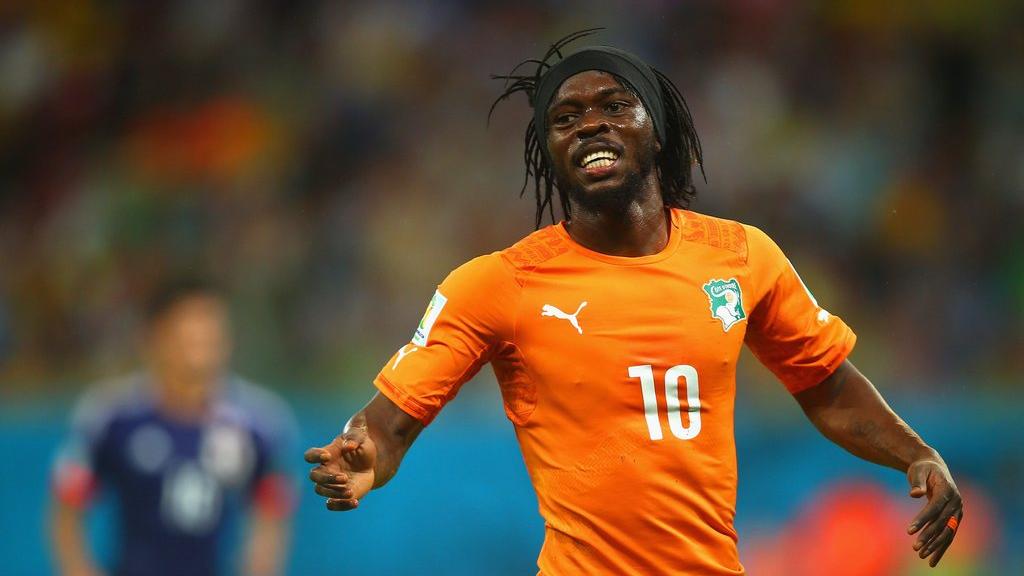 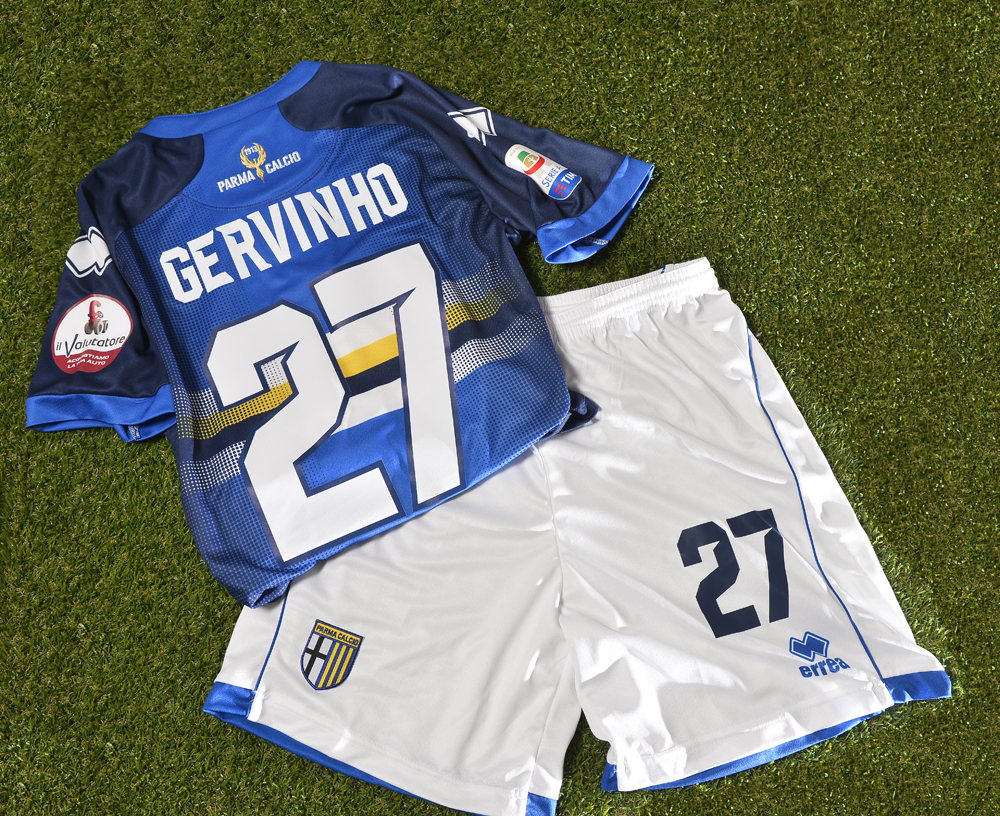 Also this style of shorts was exclusively done for the special kit worn by Parma’s players against Sampdoria on May 5th 2019 and it was never used anymore. These shorts were worn by Gervinho. Gervinho is generally deployed as a forward, more often on the wing, and takes a more attacking role than a typical midfielder. A quick, powerful, energetic, and agile player, he possesses good ball control and dribbling skills, which, coupled with his short, fast bursts of pace and sudden changes of direction, lead him to be considered a very direct player. Playing from the left allows him to cut in onto his favoured right foot to shoot. Although in a 4–4–2 formation, Gervinho can take on a more central role, but for both club and country is often utilized on either wing in a 4–3–3 formation. Rudi Garcia, who managed Gervinho at Lille and Roma, has described him as a player who needs confidence and who makes opportunities for his teammates. On 17 August 2018, Gervinho returned to Serie A by signing for Parma Calcio 1913 alongside his former Roma teammate Salih Uçan. He made his Parma debut as a substitute in a 1–0 away loss to S.P.A.L. nine days later, and on 1 September he scored on his first start for the club, a 2–1 home defeat to reigning champions Juventus. Three weeks afterwards, he scored a “staggering goal” in a 2–0 home win over Cagliari by running with the ball up the whole pitch. In Serie A round 22, on 2 February 2019, he scored two goals to earn a draw for Parma against Juventus in final score 3–3. 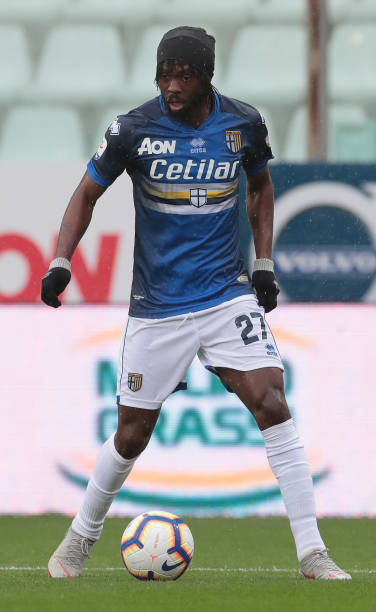 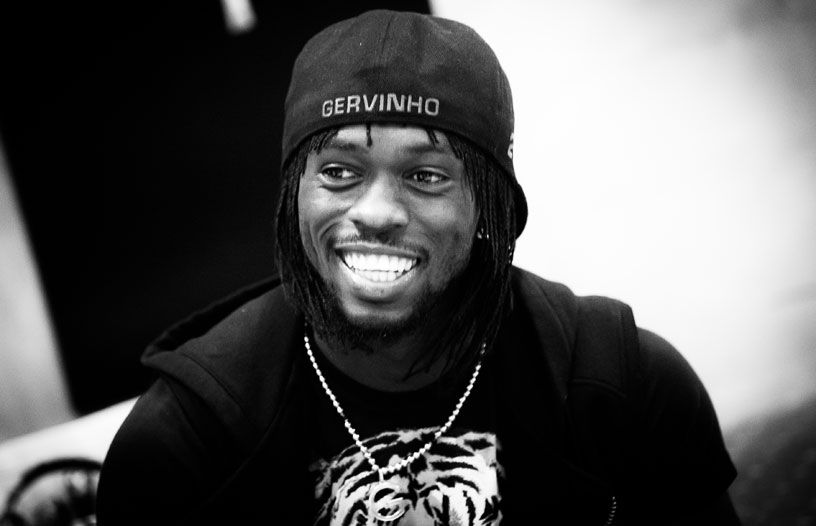 Gervinho is generally deployed as a forward, more often on the wing, and takes a more attacking role than a typical midfielder. A quick, powerful, energetic, and agile player, he possesses good ball control and dribbling skills, which, coupled with his short, fast bursts of pace and sudden changes of direction, lead him to be considered a very direct player. Playing from the left allows him to cut in onto his favoured right foot to shoot. Although in a 4–4–2 formation, Gervinho can take on a more central role, but for both club and country is often utilized on either wing in a 4–3–3 formation. Rudi Garcia, who managed Gervinho at Lille and Roma, has described him as a player who needs confidence and who makes opportunities for his teammates. 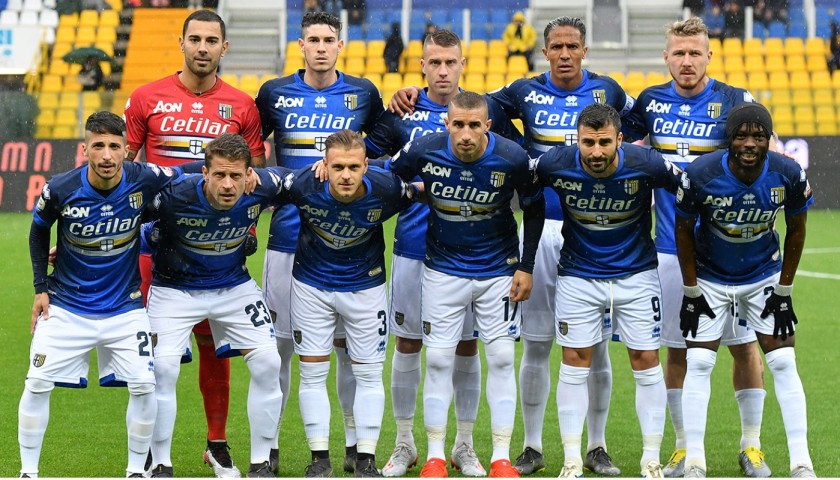 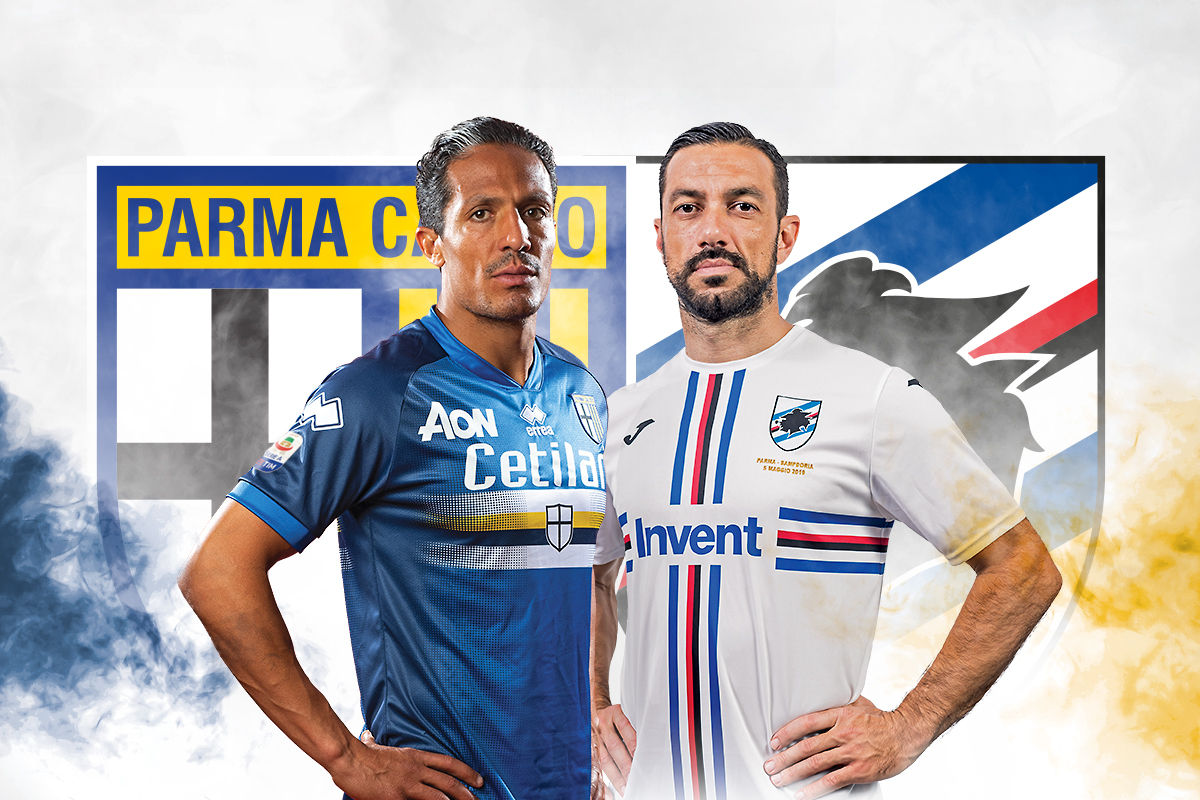 This shirt was worn by Gervinho during the game against Sampdoria which took place in Parma on May 5th 2019. This is a very special shirt used by the team only once. To celebrate the historic twinning between the fans, Parma Calcio 1913 and U.C. Sampdoria “exchanged” their shirts. The teams wore the special kits only in this game, thanks also to the collaboration of technical sponsors Errea and Joma and both clubs. The fans of Unione Calcio Sampdoria and Parma Calcio 1913 have had a friendship for nearly 30 years. The bond between the two clubs began in the 1990/91 season, during Parma’s first-ever season in Serie A. Parma’s two organised supporter’s clubs, ULTRAS Tito Cucchiaroni and Boys Parma, soon built up a good relationship with the Sampdoria fans – but it was a special banner that sealed the special bond. During Parma’s away trip to Marassi, the fans unveiled the message: “For you Europe, for you glory, for Sampdoria the Scudetto”. As it happened, Samp did win the league that year, with Parma finishing fifth. It was the first in a long line of gestures between the two sets of fans. So Sampdoria played this game in a special kit featuring Parma’s signature “crociata” design, while Parma wore a yellow and blue “blucerchiati” jerseys to honor the classical Sampdoria’s colored band of its jersey. The initiative, named “Blucrociati – not just colours”, mixed the salient features of two of the most iconic Italian kits of all times, though each team still played in their usual colors, to preserve the identity of the two clubs. The Blucerchiati shirt worn by the Parma players was produced by Errea and finished in yellow and blue. There are plenty of special details, with the classic cross of St George replaced by the coat of arms of the “Duchy of Parma” and the rear of the shirts featuring a triangle containing the Parma logo, just like the current Parma jerseys. Lettering on the side will read Parma Calcio vs Sampdoria, 5 May 2019 to make it even more special. The jerseys worn by the players in the game were put up for auction. Proceeds from sales of the Parma shirts were donated in full to the Istituto Gaslini in Genoa, while proceeds from the Sampdoria shirts went to Parma Children’s Hospital. Limited editions (400 shirts of Sampdoria’s kit) of both shirts were also available for fans to buy in both club online stores for 99 Euro. Of course match worn shirts had some slight differences…. 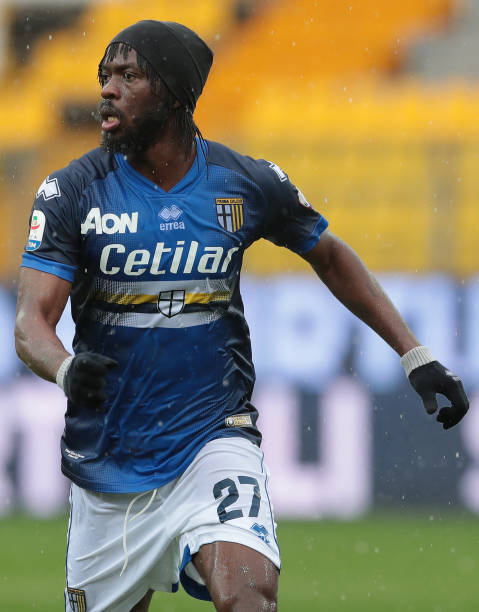 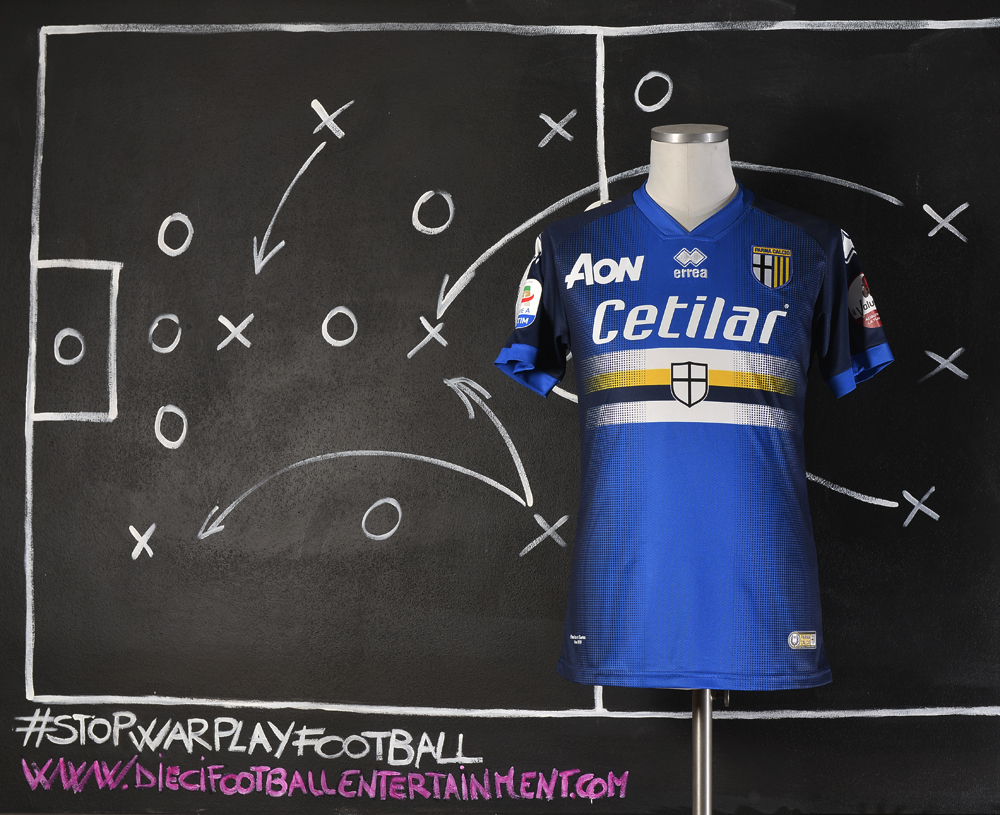 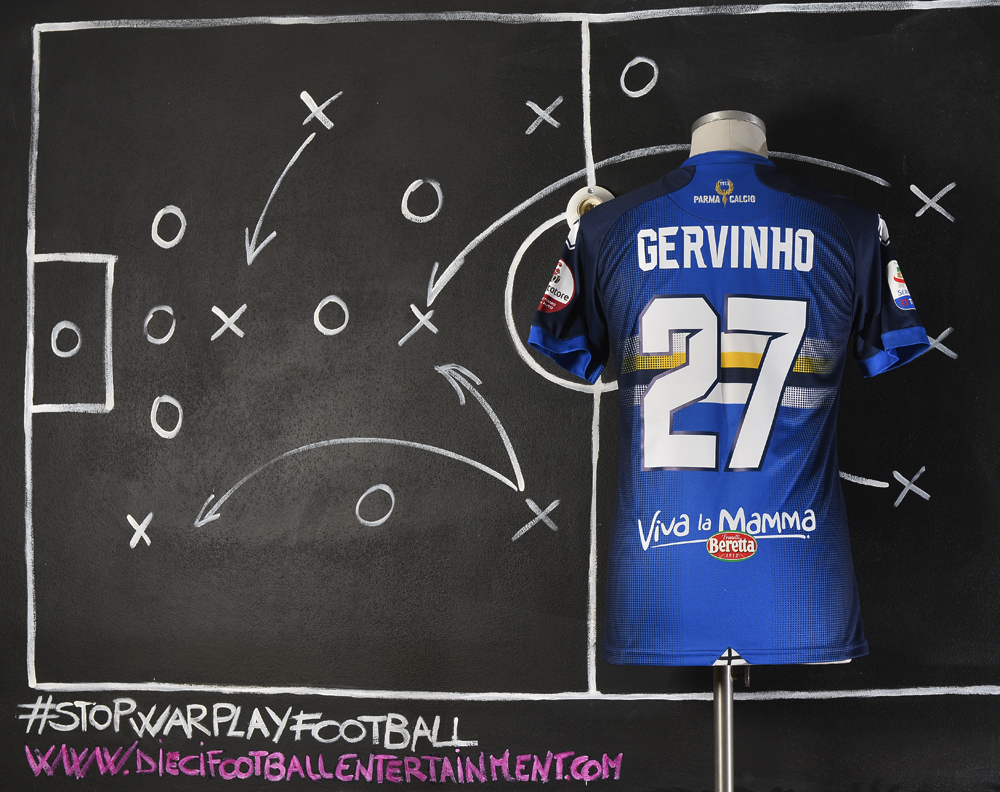 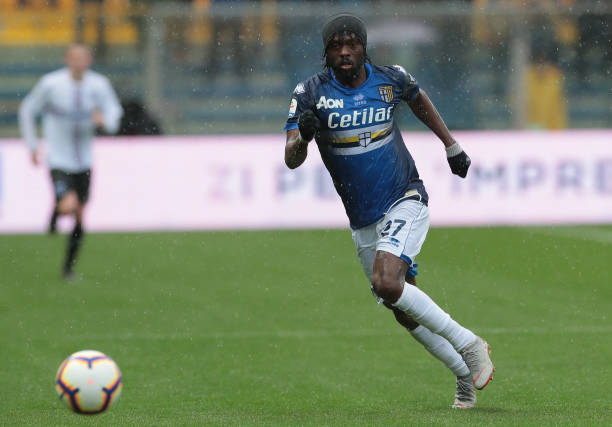 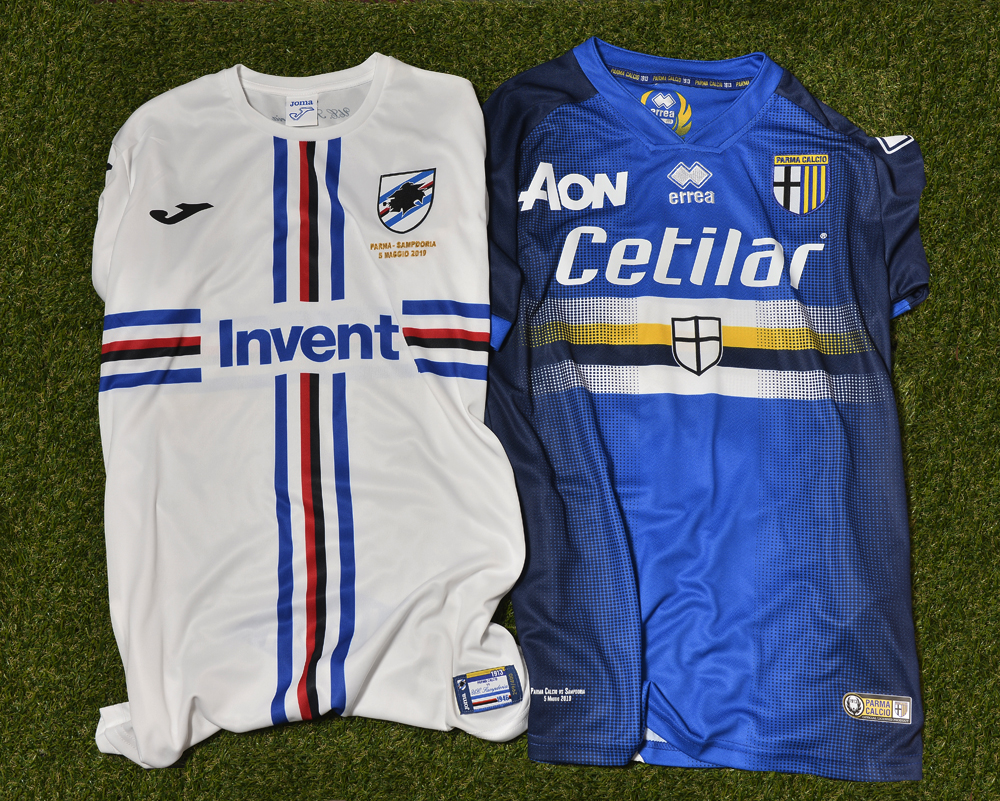 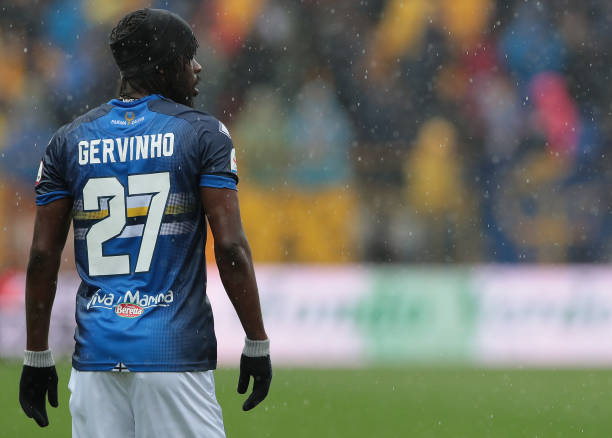 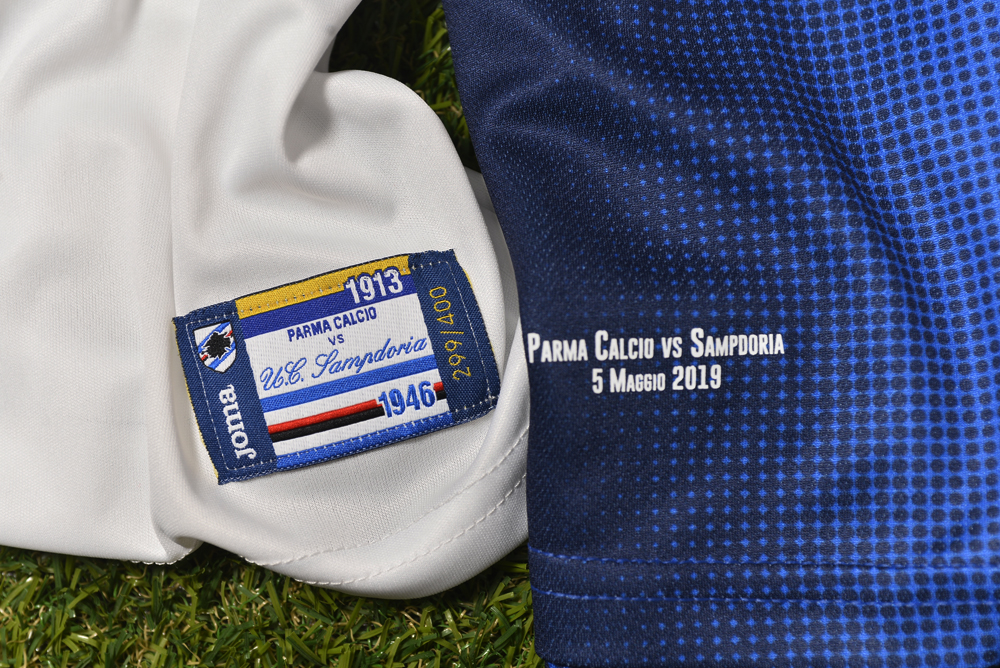 Gervinho captained Ivory Coast at U23 level. He was named in the Ivorian senior squad for the first time for the friendlies against Angola and Qatar in November 2007, and was picked for the Ivorian squad for their 2008 African Cup of Nations campaign in Ghana where he was given the number 10 shirt. He made his competitive debut for the Ivorian club during the 2008 Nations Cup where he made two substitute appearances. He represented his country at the 2008 Olympic tournament where he was captain. After Ivory Coast lost to Argentina in the first match, Gervinho scored one goal and set up two others in a 4–2 victory over Serbia. On 15 January 2010, Gervinho scored his third international goal in the African Nations Cup group stage game against Ghana. He made a total of three appearances in the tournament, scoring once. Gervinho missed a sudden-death penalty in the shoot-out at the 2012 Africa Cup of Nations Final, after which Stopila Sunzu scored to win the tournament for Zambia. In the Ivory Coast’s opening match at the 2015 Africa Cup of Nations in Equatorial Guinea, Gervinho was sent off for striking Guinea’s Naby Keïta during a 1–1 draw at the Nuevo Estadio de Malabo. He was given a two-match ban for the incident. Gervinho returned for the Ivory Coast’s quarter-final against Algeria, scoring the last goal of a 3–1 win, and also netted in a semi-final victory of the same score against the DR Congo. Gervinho made only three appearances, all as a substitute, in qualifying for the 2010 World Cup but still scored twice. On 15 June 2010, he played his first match in a World Cup. He played 82 minutes in Ivory Coast’s opening match in Group G against Portugal, which ended 0–0. In total he made three appearances in the World Cup. Gervinho was included in Ivory Coast’s 23-man squad for the 2014 FIFA World Cup.[59] In their first group match against Japan, he scored the team’s winning goal from Serge Aurier’s cross in a 2–1 win. In the next match, he scored the only goal for Les Éléphants as they were defeated 2–1 by Colombia in Brasília. 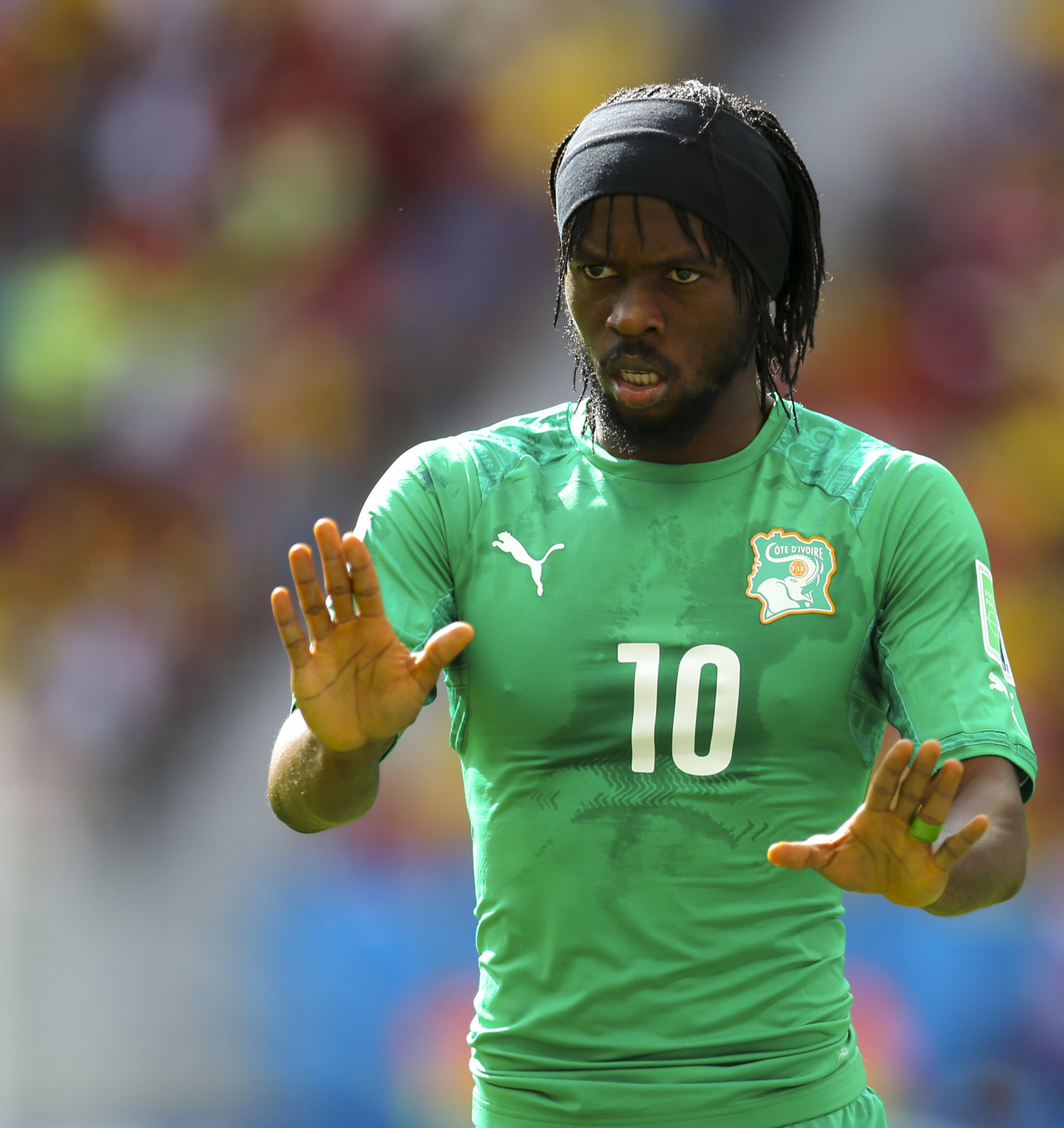 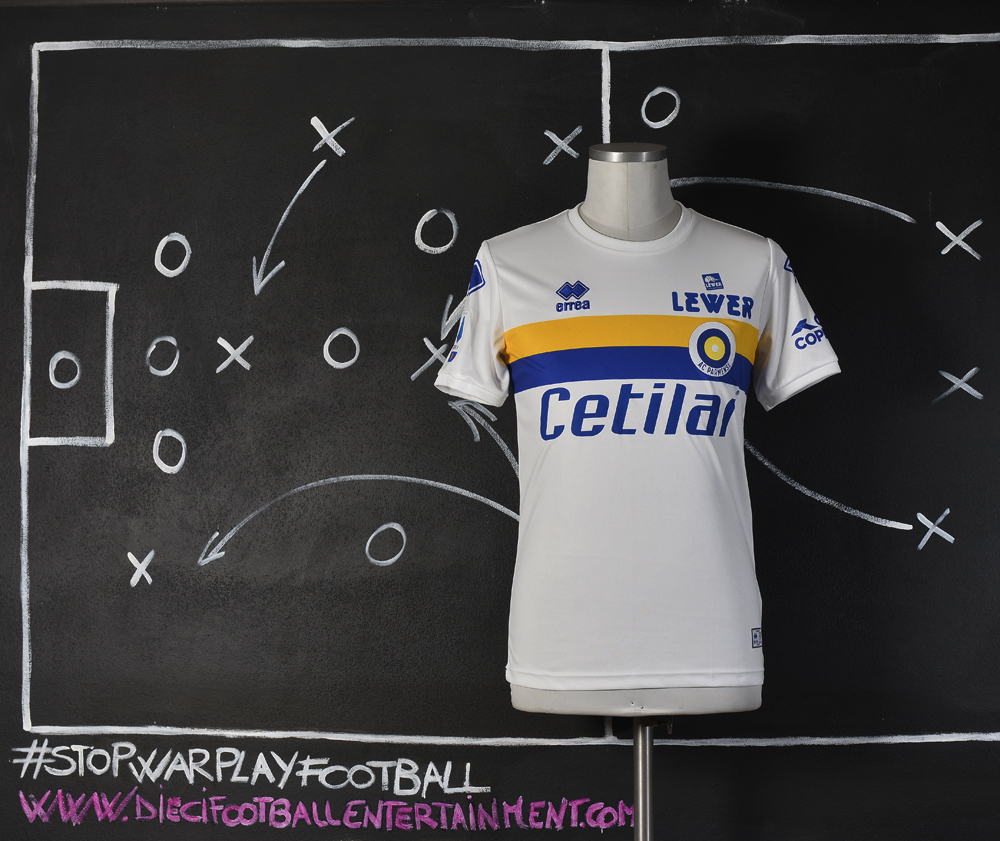 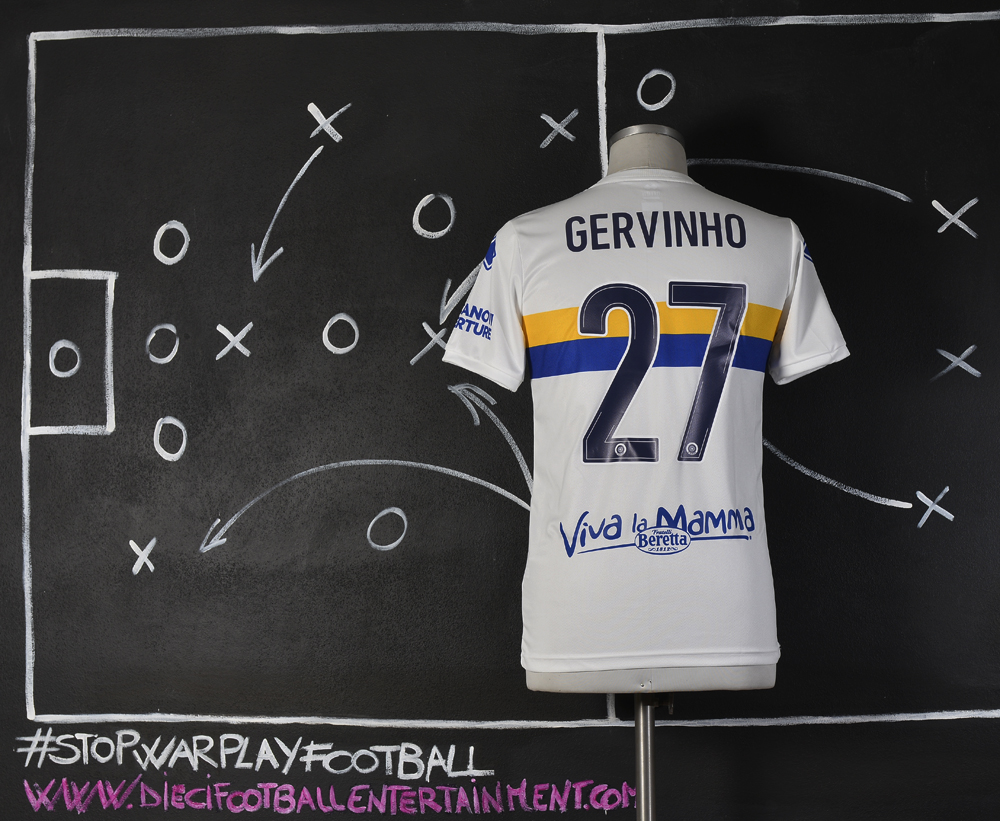 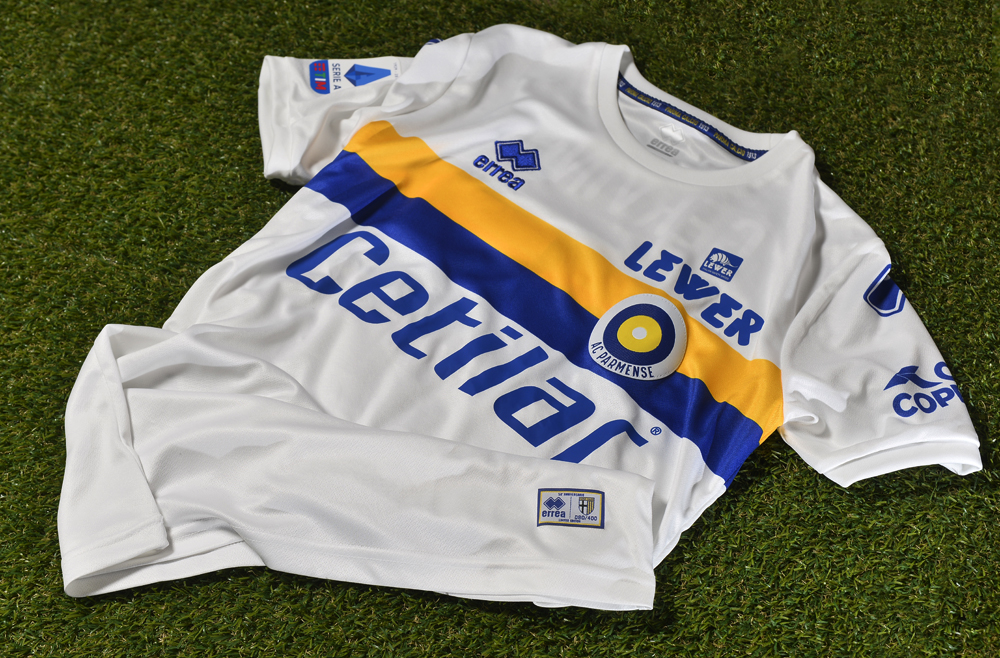 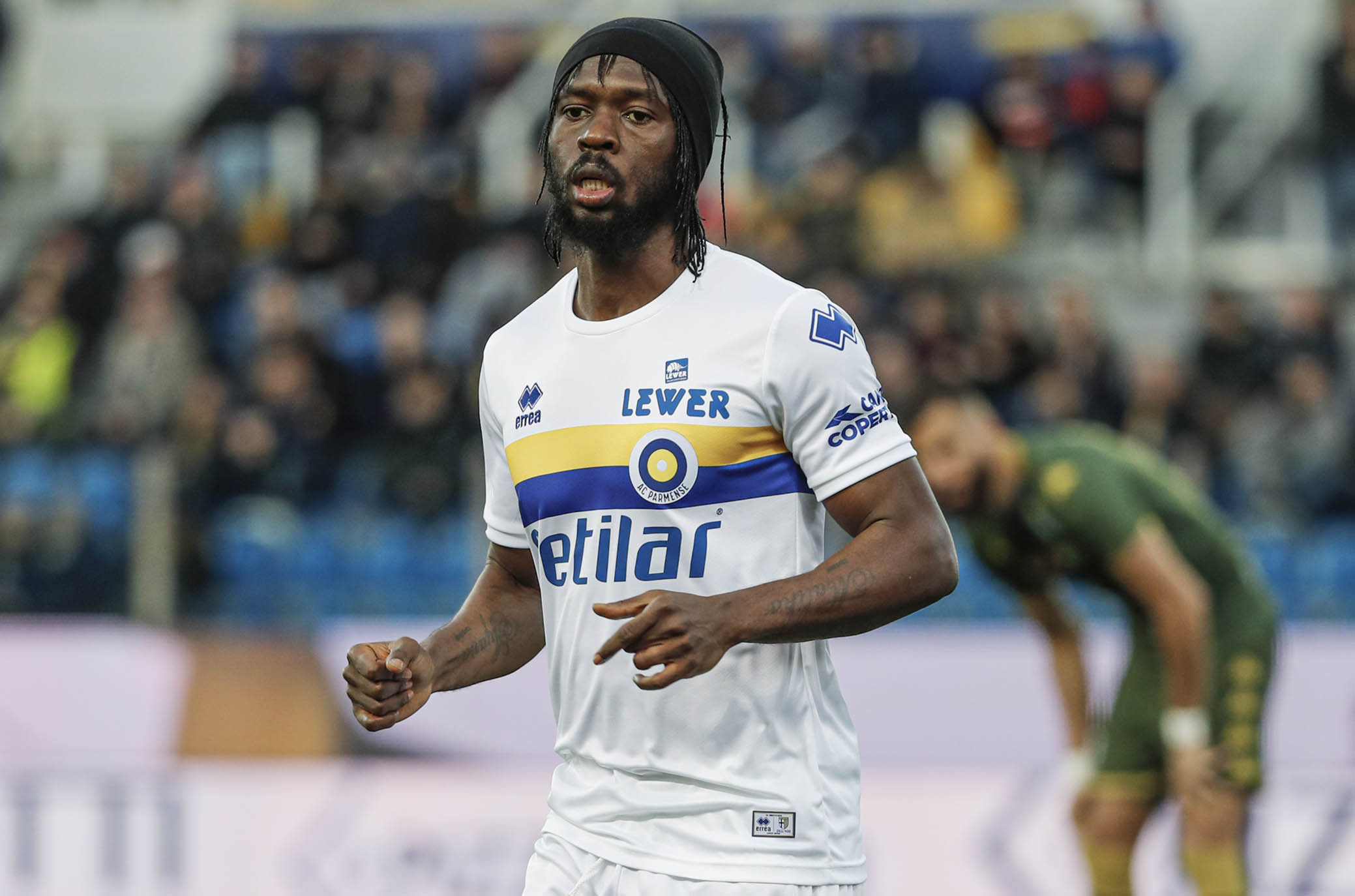 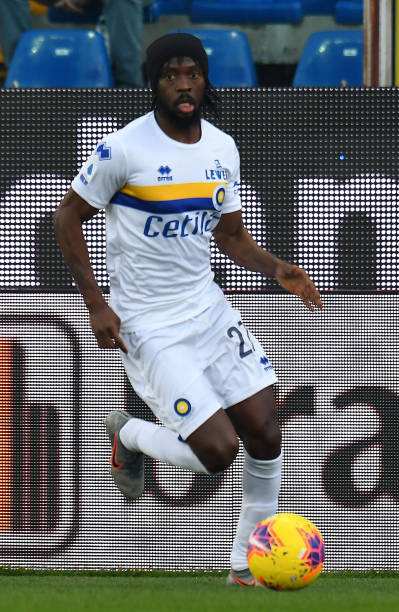 This shirt was worn by Gervinho during the Serie A game between Parma and Brescia which took place in Parma, “Ennio Tardini” Stadium, on December 22nd 2019. This is a special limited edition shirt used by the team in this game and it celebrates the foundation of the club on December 16th 1913. In addition, this season marks the 50th anniversary of a legendary season in club history. In the 1969/1970 season, AC Parmense inherited the title of the city’s first football team and turned into Parma AC. To celebrate these events the team’s supplier Errea made this special limited edition kit. A recreation of the most iconic uniform in club history, Parma’s new 2019-2020 special-edition football shirt is white with a yellow-blue chest band. The contemporary club badge is replaced by the historical AC Parmense logo. Finally, each shirt is numbered on an embroidered label on the side. Following the game against Brescia the jerseys worn on the field by the players were auctioned. The entire proceeds was donated to ‘Insieme con te’, a campaign to support the community of Parma at the New Oncology Centre of the Maggiore Hospital. This kit was made in a total of 400 pcs worldwide. The lowest numbers were given to the players (around 80 pcs), while the rest of the shirts were sold in a special limited edition box to the team’s store.

Grosso Grosso2020-07-14T11:00:08+00:00
Page load link
This site uses cookie technology, including third parties' ones. If you want to know more click here. If you access any element of this site outside this banner, you consent to the use of cookies. Ok