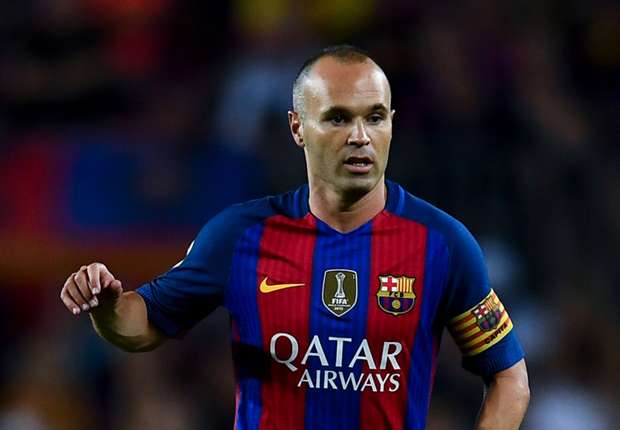 Andrés Iniesta Luján is a Spanish professional footballer who plays as a central midfielder for FC Barcelona and the Spain national team. He serves as the captain for FC Barcelona. He made his first-team debut aged 18 in 2002. He began playing regularly during the 2004–05 season and has remained in the team ever since. Iniesta was an integral part of the Barcelona sides that won two historic trebles in 2009 and 2015, and his 33 trophies make him the most decorated Spanish footballer of all time. Iniesta played for Spain at the Under-16, Under-19 and Under-21 levels before making his international debut in 2006. He helped Spain win Euro 2008, playing every game and being selected in the Team of the Tournament. Iniesta was also a key member of the victorious Spanish team at the 2010 World Cup; he scored the winning goal in the final against the Netherlands, for which he was named the Man of the Match, and was selected to the tournament’s All-Star Team. At Euro 2012, Iniesta led Spain to their second consecutive continental crown, again being chosen as the Man of the Match of the final against Italy, and was named the Player of the Tournament.Iniesta is widely considered to be one of the best players of his generation and one of the greatest midfielders of all time. Since 2009, he has been chosen in the UEFA Team of the Year six times and has been voted into the FIFA World XI on eight occasions. Iniesta won the UEFA Best Player in Europe award in 2012 and was named the IFFHS World’s Best Playmaker in 2012 and 2013. He was runner-up to Lionel Messi for the 2010 FIFA Ballon d’Or and achieved third place in 2012. 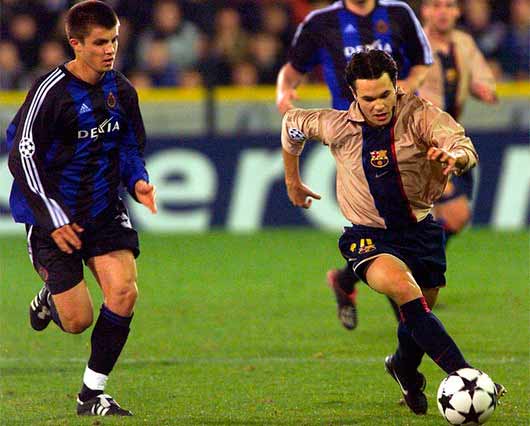 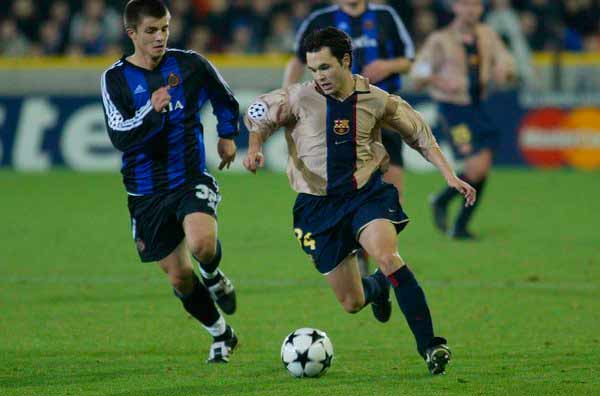 In the season 2002-2003 Andres Iniesta was in the second Barcelona’s team. He did some appearances with the first team but basically he was a player of the second one. He came through La Masia, the Barcelona youth academy, after an early emigration from his birthplace, and impressed from an early age. He made his first-team debut aged 18 in 2002. This shirt is one of the very first Champions League’s shirts made for him. 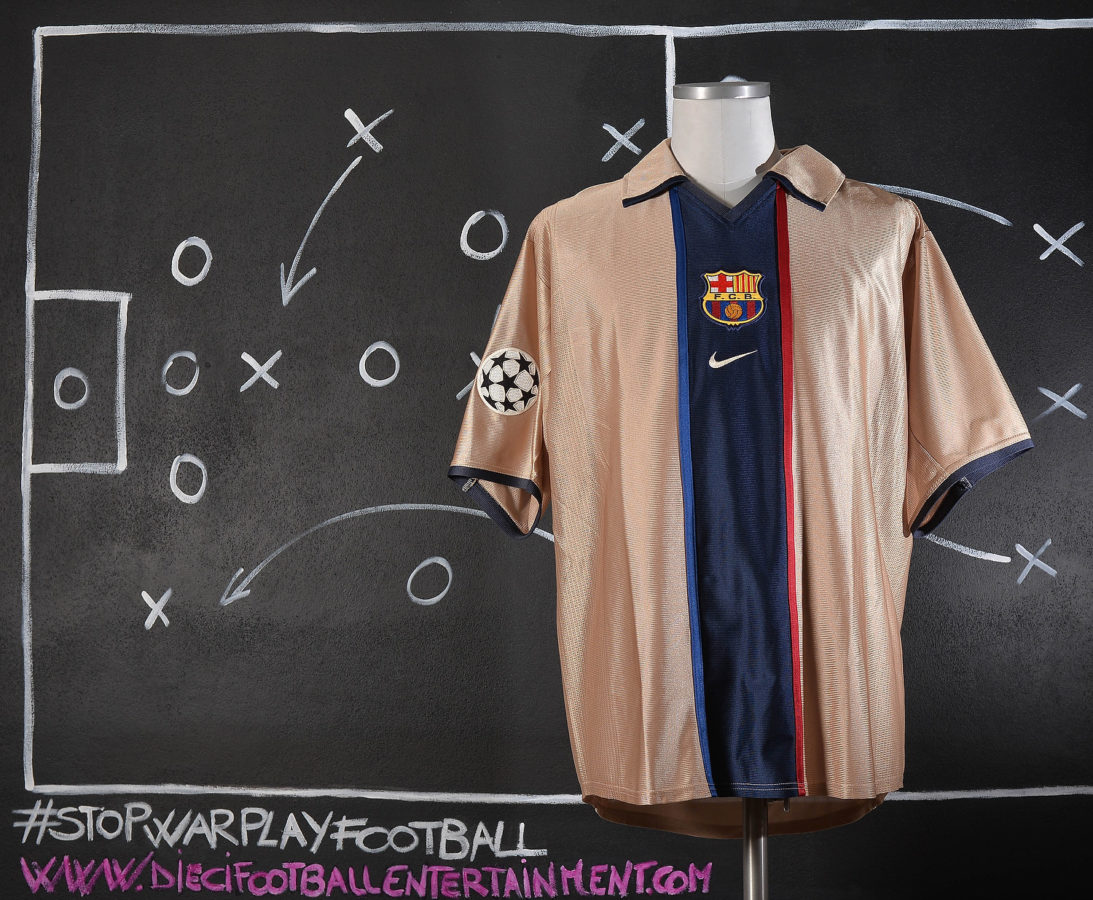 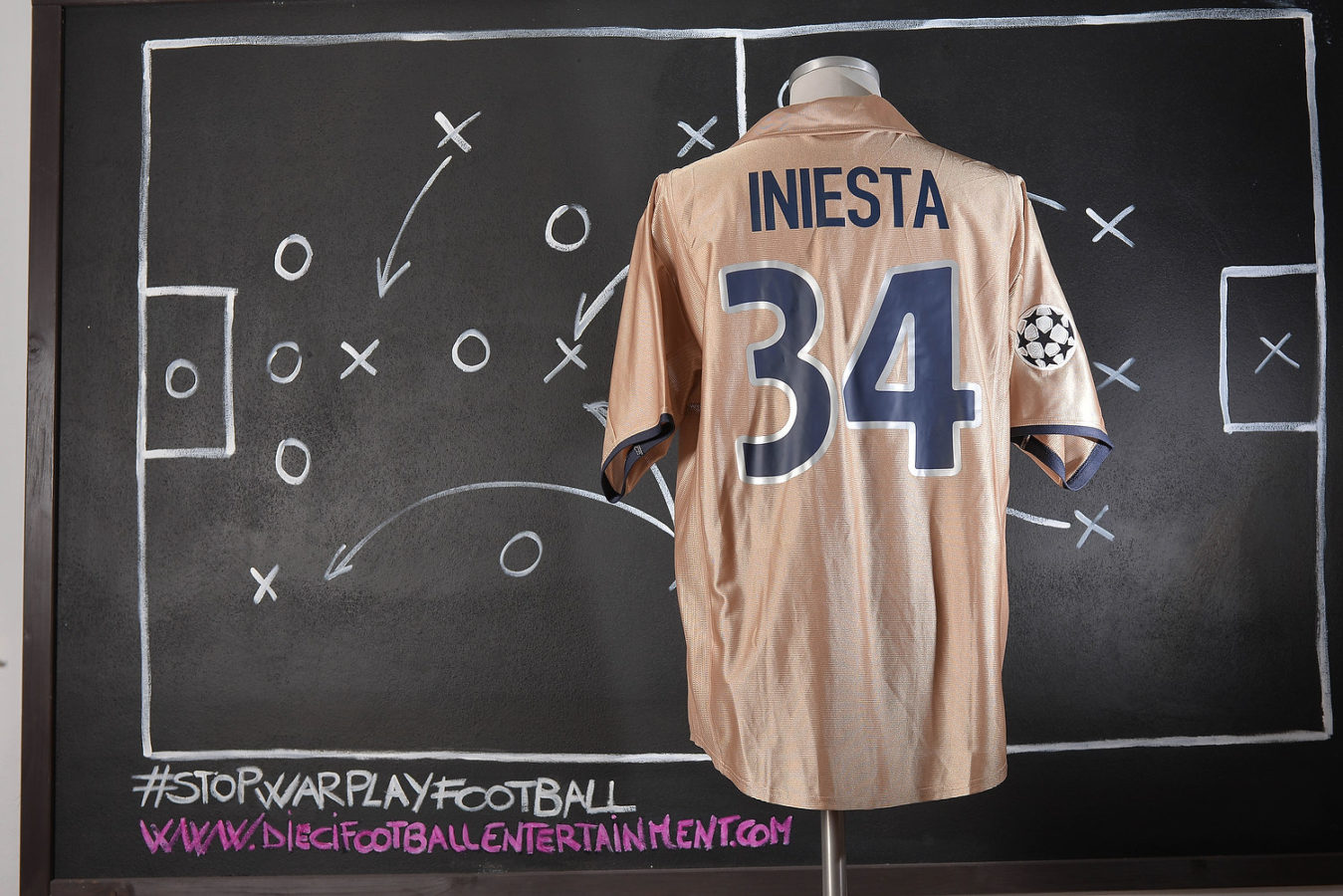 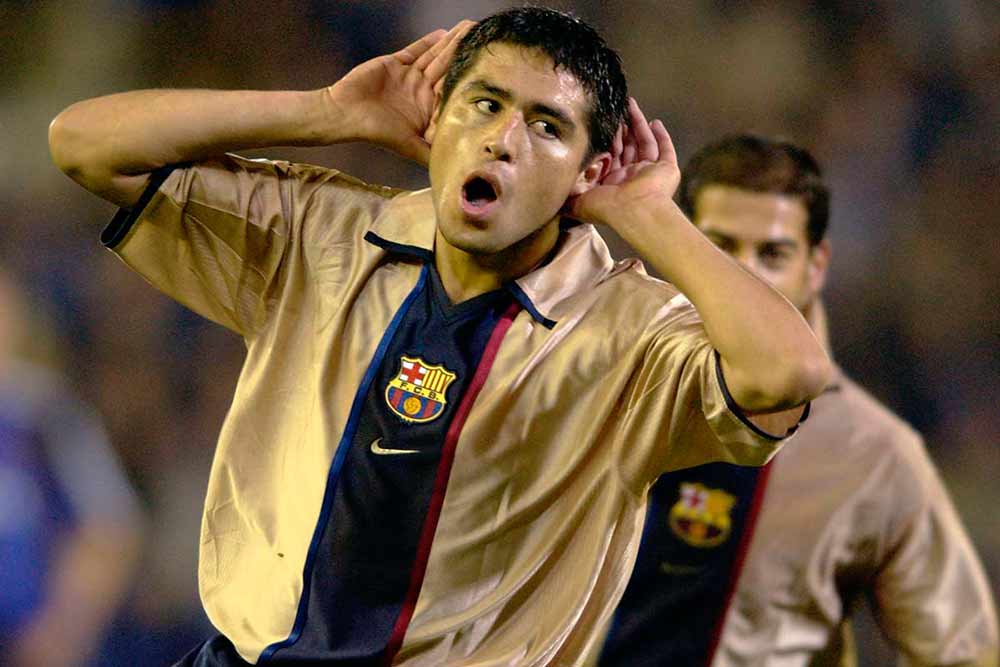 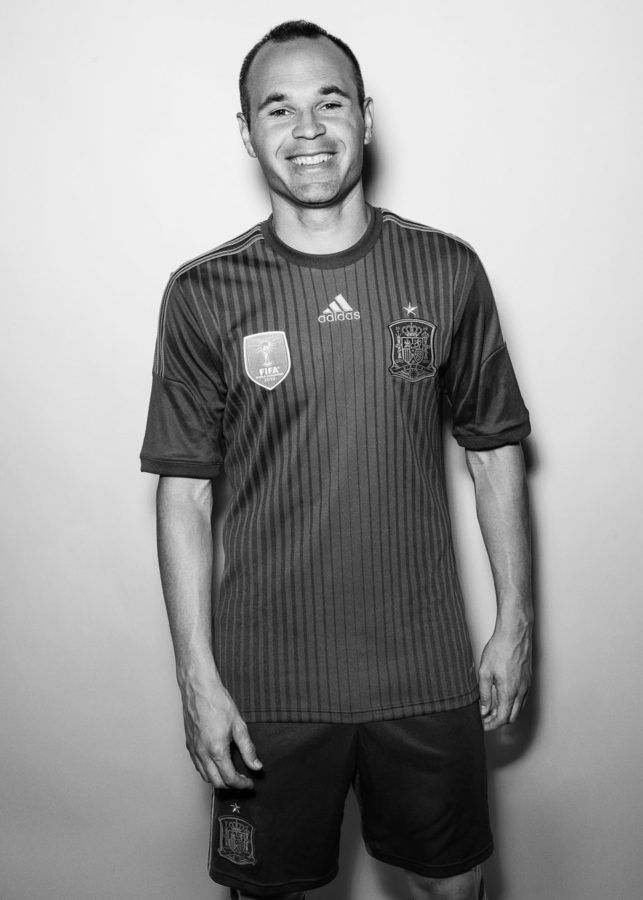 Like fellow La Masia graduate Cesc Fàbregas, Iniesta originally started as a defensive midfielder, but his balance, ball control and agility allied with his skill on the ball saw him make progress as an attacking midfielder. Beyond his raw talent that was spotted at a young age by Barcelona’s scouts, it was his great versatility, work ethic and inventiveness that allowed him to stake a claim on a first-team place at the age of 18. Vicente del Bosque described him as “the complete footballer. He can attack and defend, he creates and scores,” and Frank Rijkaard said, “I played him as a false winger, central midfielder, deep midfielder and just behind the striker and he was always excellent.” He was used initially as a wide-forward in the absence of Juan Román Riquelme and Ronaldinho by Louis van Gaal and Rijkaard respectively, but made his name as a world-class player in central midfield alongside or in lieu of Xavi, at both club and international level. As FIFA.com says, “It is in this position that his direct style and quick feet can be used to full effect, with the ball seeming glued to his toes as he races into threatening positions. Iniesta is a player known for his passing, dribbling, vision and movement. Much like other Barcelona youth products such as Pep Guardiola, Xavi and Iván de la Peña, Iniesta is a playmaker who relies on exceptional creative passing, intuition and inventiveness to control the midfield and dictate the ebb and flow of play. Iniesta has been praised for his understanding and interplay with Xavi; former Barcelona teammate Giovanni van Bronckhorst said of the pair, “They have a special relationship, they always have, they just seem to know where the other one is.” During his maturation as a player, he has gained a reputation for playing a part in important goals for club and country, specifically playing a leading role in the 2006, 2009, 2011 and 2015 UEFA Champions League finals, as well as the 2010 World Cup Final, Euro 2012 final and Euro 2008 semi-final. His willingness to play anywhere on the pitch has earned him the sobriquet El Ilusionista (The Illusionist), El Cerebro (The Brain), El Anti-Galáctico (a pun on Real Madrid players’ nickname Los Galácticos), El Caballero Pálido (The Pale Knight) and most recently Don Andrés from the Spanish press. Zinedine Zidane also praised Iniesta, stating on the Spanish radio station Cadena COPE, “Iniesta really impresses me. He’s got so much influence in Spain’s game. He reminds me of myself.” Fernando Torres, Spain’s striker, said, “We’ve been playing together since we were 15 and I have never, ever seen him play badly.” He is widely regarded as one of the most respected and best midfielders of all time. 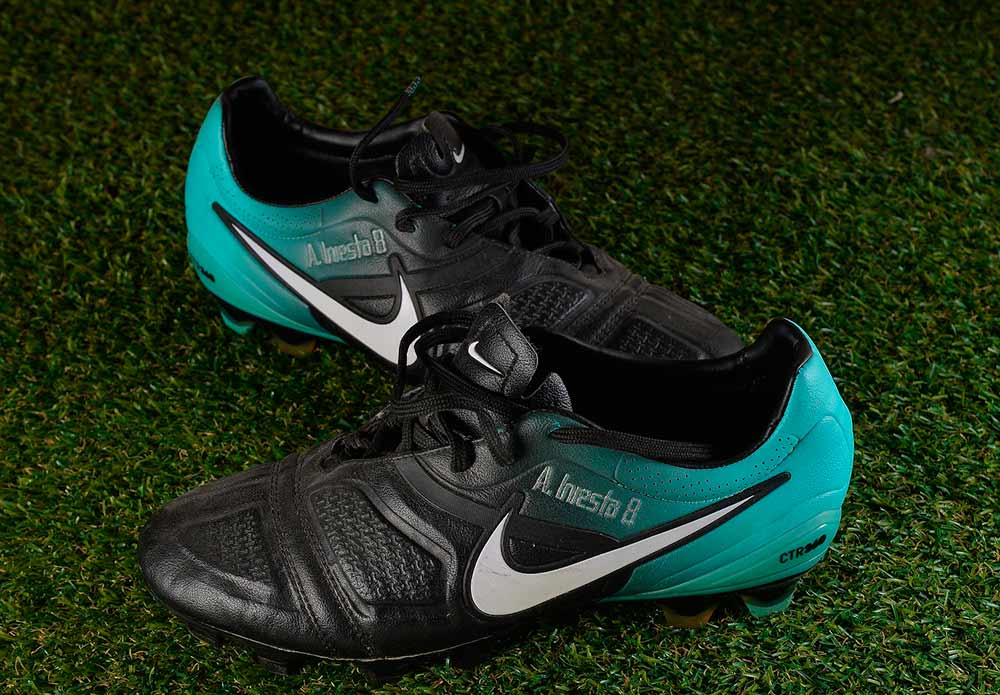 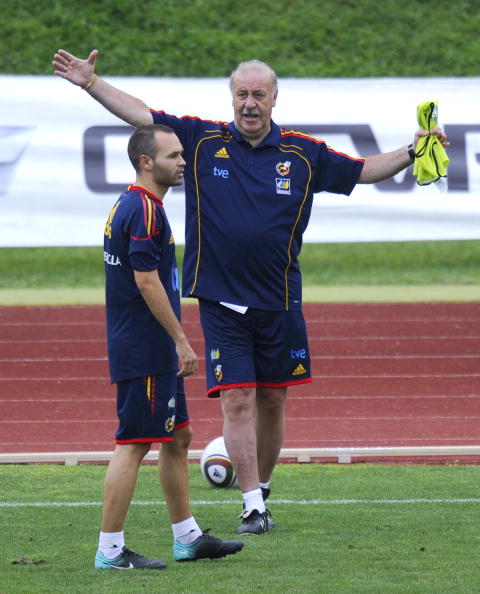 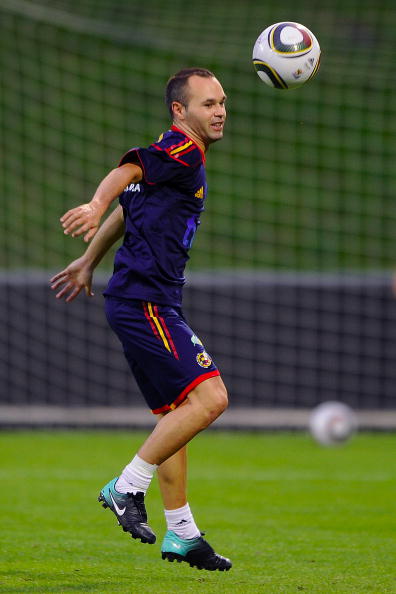 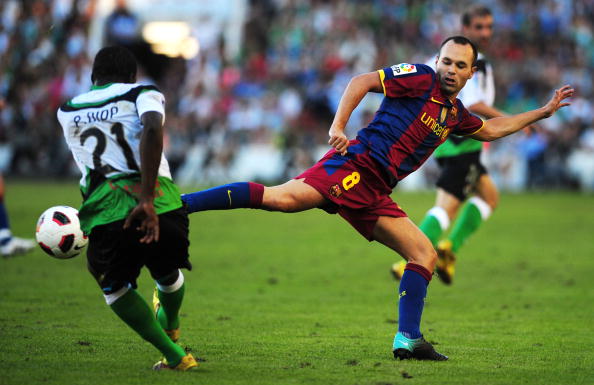 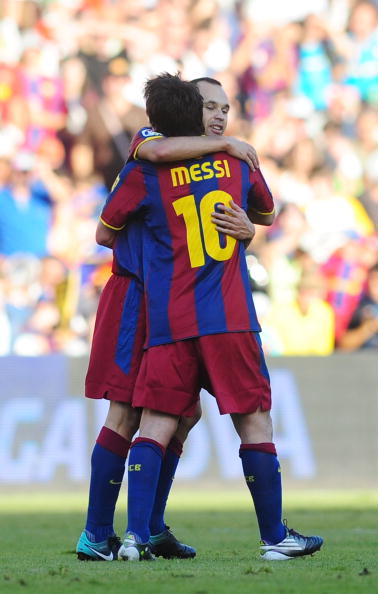 “The one who plays this game the best is Iniesta: he knows exactly when to go forward and when to drop back. He picks the right moment to do everything: when to dribble, when to speed things up and when to slow things down. And I think that’s the only thing that can’t be taught or bought. You can learn how to shoot and how to control the ball, but being aware of everything that’s happening out on the pitch – that’s something you’re either born with or you’re not” Roman Riquelme

Iniesta burst on to the international scene in 2001, helping Spain win the UEFA European Under-16 Championship. After representing his country at the 2001 FIFA U-17 World Championship held in Trinidad and Tobago, he was in the squad that claimed the UEFA European Under-19 Championship the following year. From then, he became a regular choice for youth coach Juan Santisteban. In 2003, he was part of the side that reached the FIFA World Youth Championship final in the United Arab Emirates, and was named in the FIFA all-star team. During his spell with the Spain U21 side, Iniesta was named captain on several occasions.Iniesta was called up to represent the senior Spain squad at the 2006 FIFA World Cup on 15 May 2006, much to the surprise of many. He won his first cap for La Furia Roja when he was brought on at half-time in a friendly against Russia on 27 May. His first goal followed in a friendly against England on 7 February 2007. His long-range effort, hitting the underside of the crossbar on the way in, gave Spain the lead on 63 minutes. Iniesta played a pivotal part in Spain’s qualification for UEFA Euro 2008 by scoring goals against Sweden and by assisting the strikers. Iniesta was selected in Spain’s squad for UEFA Euro 2008 in Austria and Switzerland. Though a stomach ailment somewhat hampered his performances in the group stages, he still played an integral part in the midfield. He played in the first two of Spain’s group stage matches and proved an important part of the team, providing a pass for David Villa’s second goal against Russia. He was not rested, unlike most of Spain’s regulars, for the final group game against Greece, which Spain won 2–1 thanks to a volley from Rubén de la Red and a late winner from Daniel Güiza. Iniesta returned for the quarter-final as Spain beat Italy on penalties; he was substituted before the penalty shootout itself. In the semi-final against Russia, he played the entire 90 minutes and produced a cross that Xavi converted to open the scoring; he was subsequently named the Man of the Match. He played the duration of the final in Spain’s 1–0 win over Germany. Iniesta was named in the Team of the Tournament alongside fellow Spain midfielders Xavi, Marcos Senna and six other teammates. Iniesta did not participate in the 2009 FIFA Confederations Cup in South Africa due to a thigh muscle injury; Spain was eliminated from the tournament at the semi-final stage. Iniesta was selected for Spain in the 2010 World Cup and scored the second goal in a 2–1 group stage win against Chile. He was also named man of the match. For his excellent performances in helping Spain reach the final of the tournament, Iniesta was shortlisted for the Golden Ball award. During the final, he scored the winning goal in the 116th minute of a 1–0 win against Netherlands. He earned a yellow card for removing his jersey during his celebration to reveal his message to his late friend Dani Jarque. He won the man of the match award for his performance in the final, which gave Spain its first-ever World Cup. At UEFA Euro 2012, Iniesta was awarded the man of the match award for his performances in three different matches. He was also selected as man of the match in the final against Italy, which Spain won 4–0. In winning the award, Iniesta became the only Spanish player to win the award at least once in each of Spain’s three consecutive successful tournaments. Iniesta was also chosen as the UEFA Euro 2012 Player of the Tournament. At the 2013 FIFA Confederations Cup, Iniesta was named in the Team of the Tournament and awarded the Silver Ball for the second best player in the competition, as Spain finished runner-up to host nation Brazil. Iniesta started all three matches for Spain at the 2014 World Cup, winning his 100th cap in the team’s final group match against Australia. At UEFA Euro 2016, he assisted the only goal of the match against Czech Republic and put in a man of the match display to give Spain a winning start in the tournament. 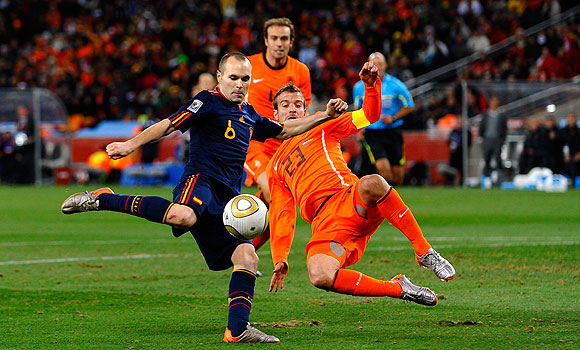 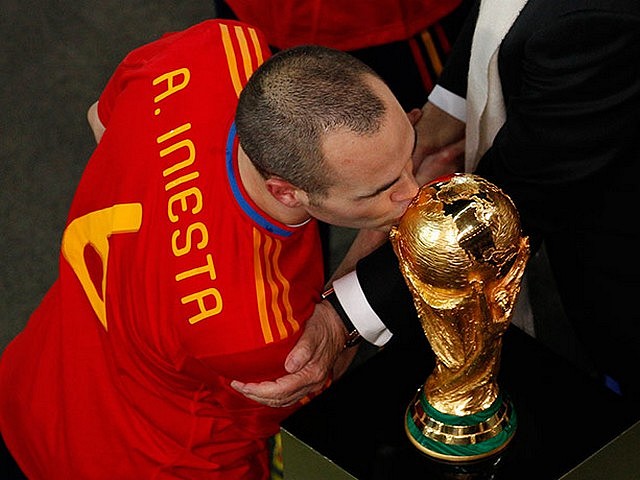 Grosso Grosso2021-01-11T09:02:19+00:00
Page load link
This site uses cookie technology, including third parties' ones. If you want to know more click here. If you access any element of this site outside this banner, you consent to the use of cookies. Ok
Go to Top