“Hurrà JUventus” is the official magazine of Juventus F.C. It was published for the first time in 1915 with the name of “Hurrà!”. Even if there are signs of a previous bulletin called “Juventin Guerino”, the first official magazine “Hurrà!” was published on June 10th 1915. The intent of “Hurrà!” was to keep updated Juventus’s members on team’s news, especially the members that were recruited for the World War I. “Hurrà!” was published for almost a year and then it was suspended from 1916 to 1919 due the lack of information during the war. It was published again starting 1919 until 1925 when it was suspended again. On january 1963, after 38 years, a totally new team’s magazine called “Hurrà JUventus” was published for the first time, with Omar Sivori on cover. The price was 100 Lire. Magazine’s director was Felice Borel, a former Juventus player, who became world champions in 1934 with the Italian team. For the first 8 months “Hurrà JUventus” was printed in black and white and it then started to be printed with colored covers only before being published fully colored. Since then, January 1963, “Hurrà Juventus” is the official team’s magazine. 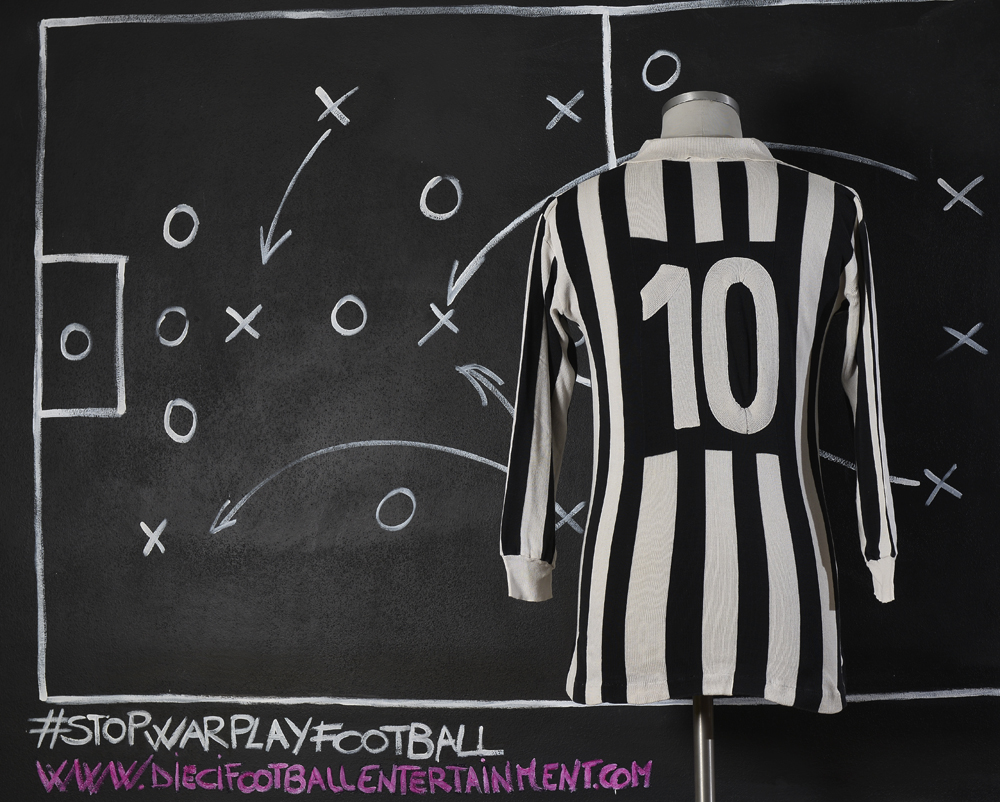 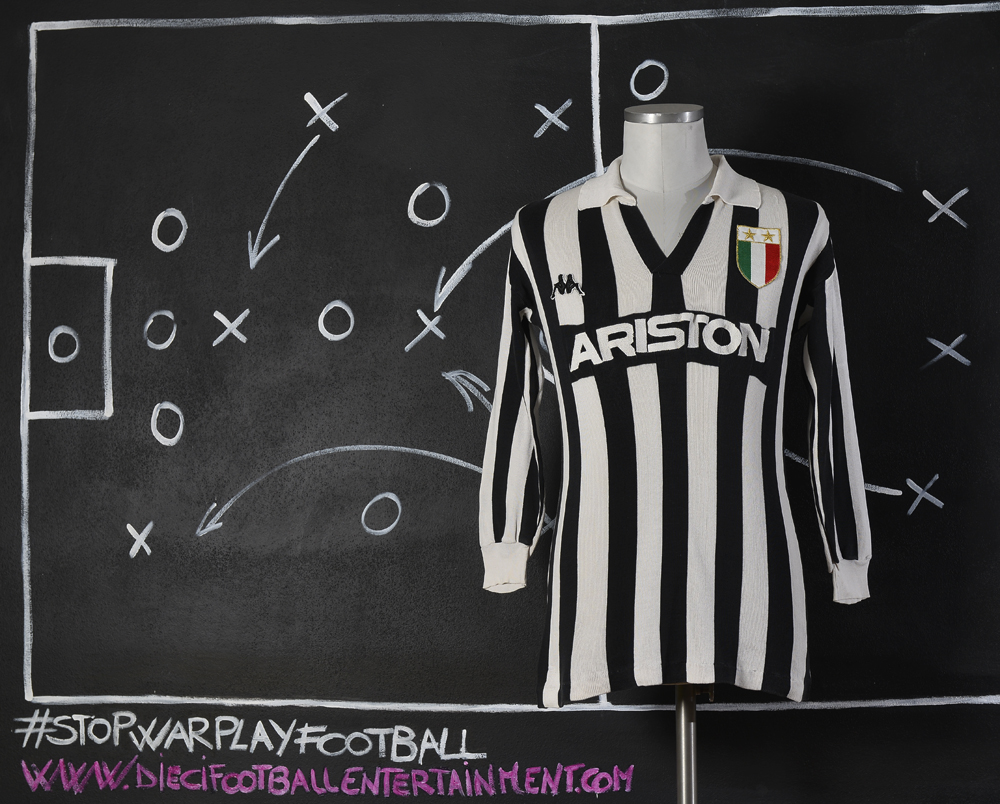 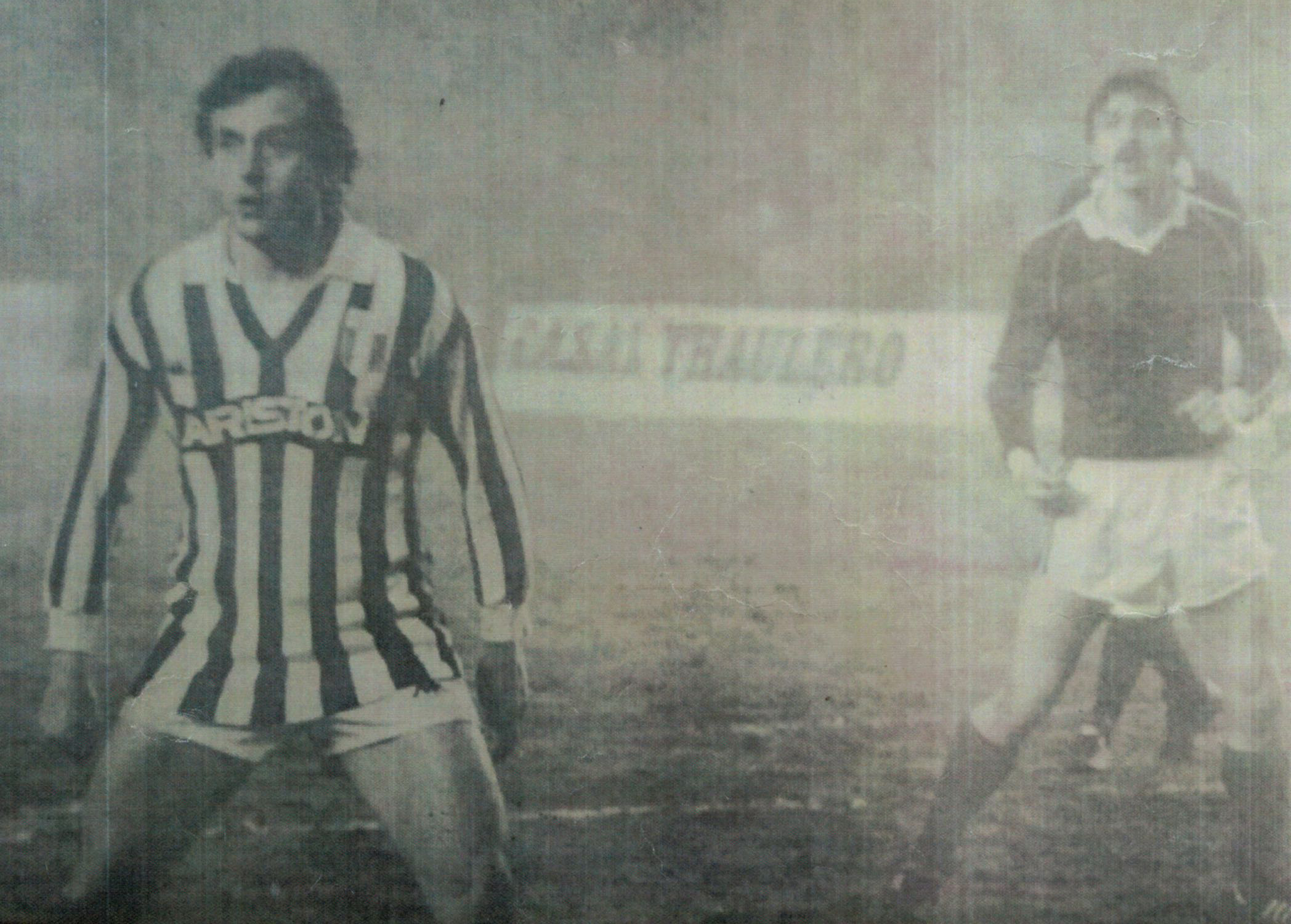 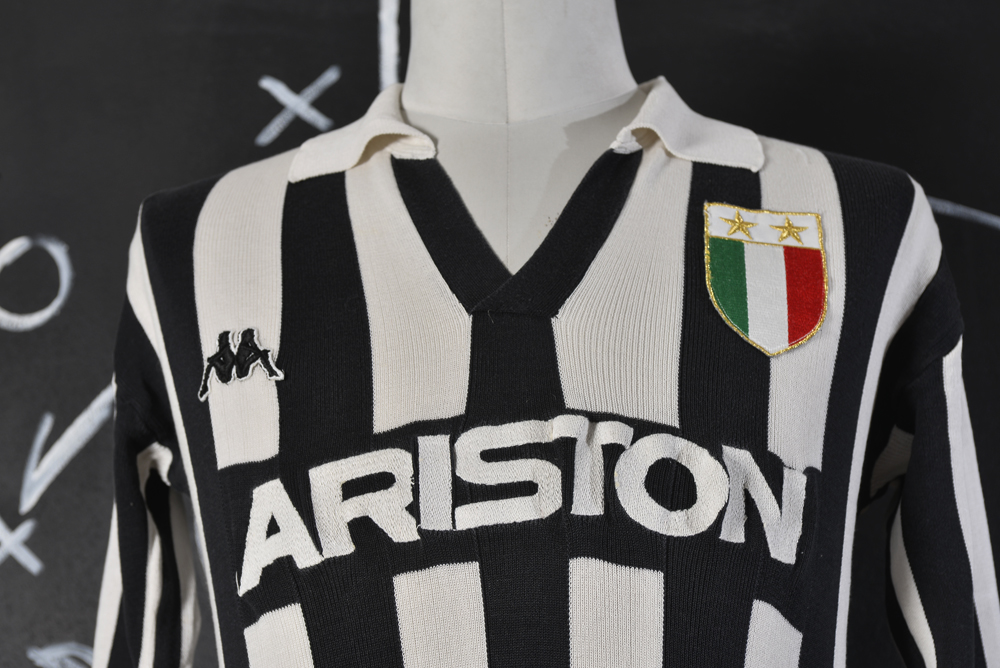 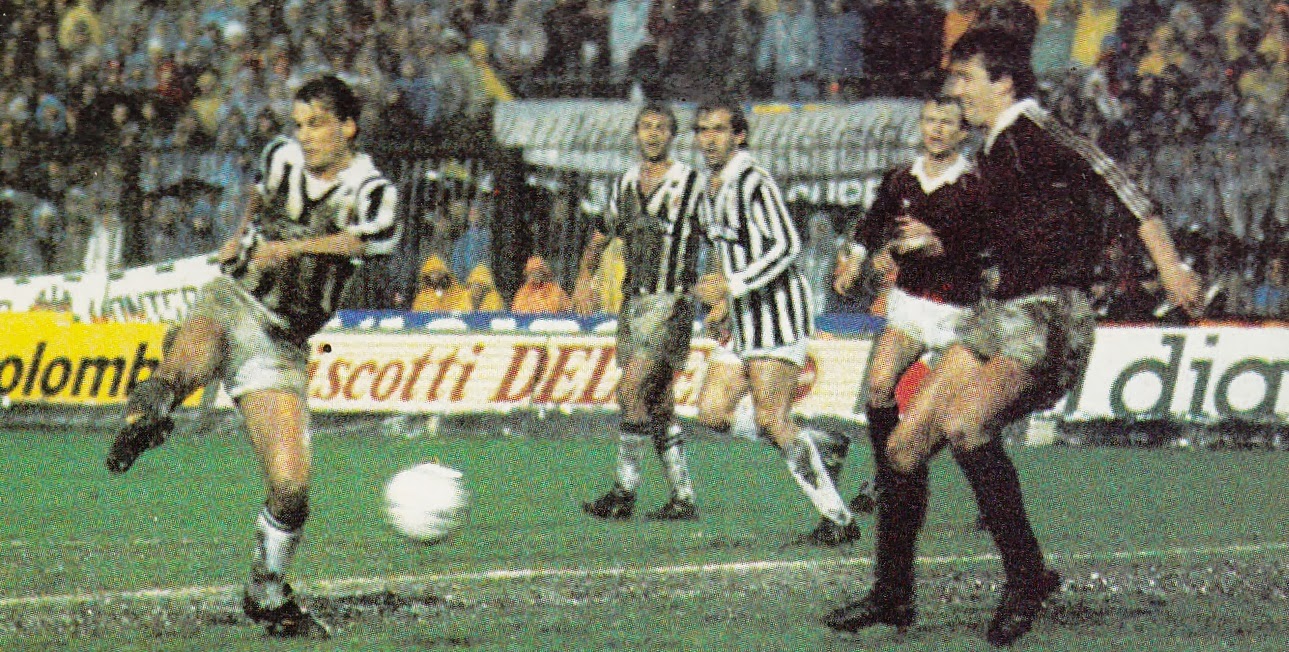 In 1984-1985 season Juventus F.C. finished 6th in Serie A, however, won the European Cup for the first time in Heysel. However, the season was marked by the Heysel Stadium disaster in which 39 people died, mostly Juventus supporters. The 1985 European Cup final against Liverpool at the Heysel Stadium in Brussels should have been the crowning moment of Platini’s Juventus career, but was instead overshadowed by the Heysel Stadium disaster in which 39 people died, and 600 more were injured. It was decided to proceed with the match in order to avoid inciting any further trouble, and after both captains had appealed for calm, the match began just under an hour and a half beyond schedule, with riot police still engaged in a pitched battle with Juventus fans. Platini scored the only goal of the match from a penalty kick, which had been controversially awarded for a foul just outside the area on Zbigniew Boniek, after the Frenchman had met his run behind the defence towards goal with a long ball. In the days following the final, Platini was criticized in some quarters for his lack of restraint in celebrating Juventus’ win. In his own defence, Platini maintained that he had not been made fully aware of the scale of the disaster 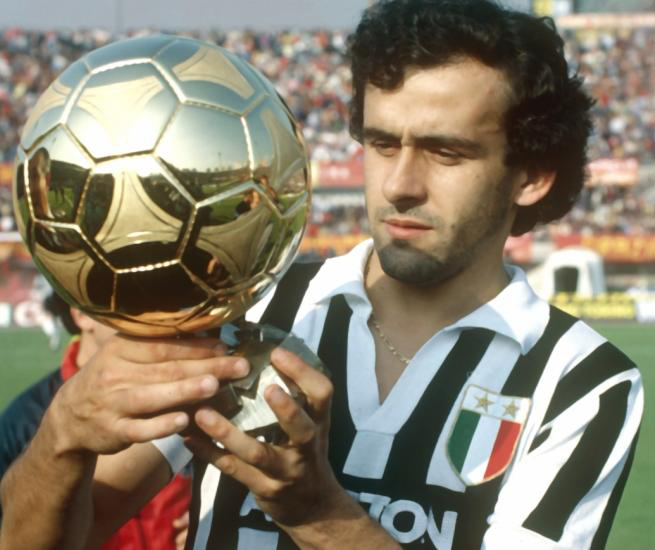 Michel Platini signed with Juventus in 1982. At Juventus, he inherited the number 10 shirt from the recently departed Liam Brady. In a team featuring numerous members of Italy’s victorious World Cup squad, Platini had a difficult introduction to Italian football. He was a target in the demanding Italian sports media, and even came close to leaving Italy in the winter of his first season. Platini and teammate Zbigniew Boniek successfully called for a change in tactics, and in the second half of the season Juventus saw an upturn in their fortunes. They reached the European Cup final, losing to Hamburger SV, but won the Italian Cup, the first of many club honours to follow for Platini in the coming seasons. He won the Serie A title with Juventus in 1984 and 1986, the European Cup Winners’ Cup in 1984 (setting up Vignola’s opening goal in the Turin club’s 2–1 victory over Porto in the final of the competition), the 1984 European Super Cup, the European Cup in 1985 and the 1985 Intercontinental Cup. He finished top scorer in Serie A for three consecutive seasons (1982–83, 1983–84, and 1984–85), and won a hat-trick of European Footballer of the Year awards (1983 through 1985). He was also voted Player of the Year by World Soccer magazine in 1984 and 1985. 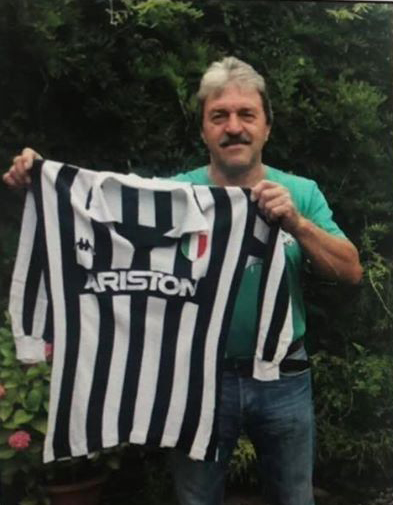 This shirt was worn by Michel Platini during the 1984-1985 European Cup’s  quarter-final game against Sparta Prague which took place in Turin on March 6th 1985. The shirt was swapped after the match with the Sparta Prague’s player Vlastimil Calta (in the above picture holding the shirt) who we got this shirt from. The shirt is well recognizable from game’s images because of two issues on it. The first issue is the “Ariston” sponsor which it was not embroidered really centered making the last letter “N” overtaking the black sponsor band’s edge and “touching” the white stripe as you can from the closeup picture of Platini wearing the shirt. The second issue is that on the back, the number 0 was sewn higher than number 1, as you can from the game’s footage below. 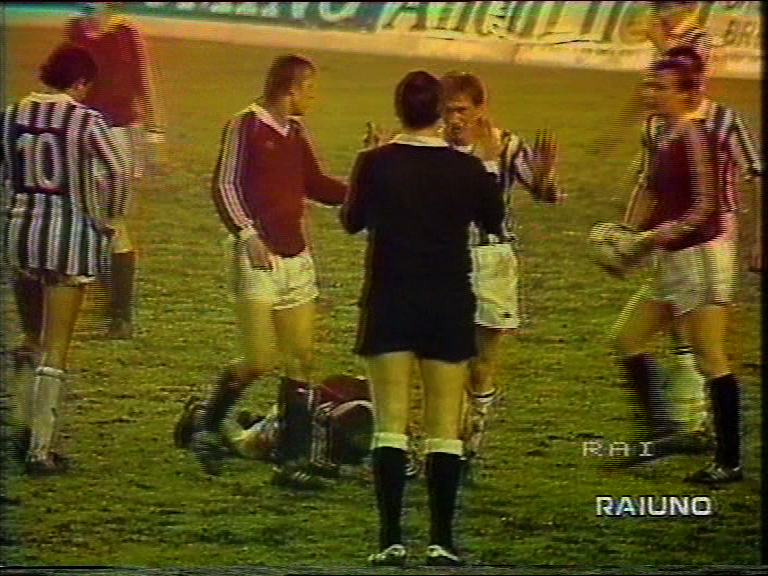 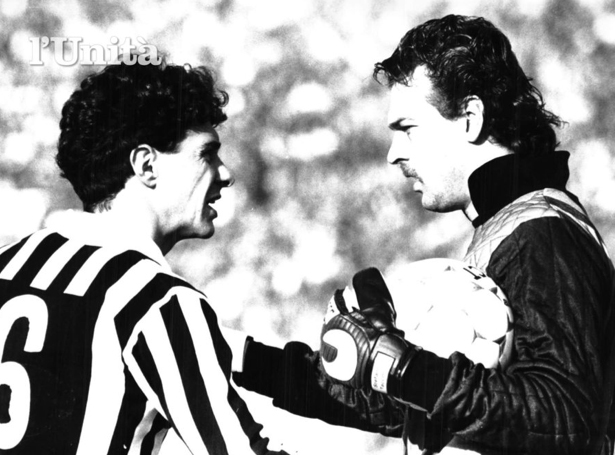 Tacconi joined Juventus in 1983, ahead of Luciano Bodini, as a replacement for his legendary predecessor Dino Zoff, who had retired at the end of the previous season. With Giovanni Trapattoni’s Juventus club, Tacconi achieved great domestic and international success, as he won two scudetti in 1984 and 1986, the European Cup Winners’ Cup in 1984, the 1984 European Super Cup, the European Champion Clubs’ Cup in 1985 and the 1985 Intercontinental Cup the same year against Argentinos Juniors on penalties. In 1990 Tacconi and Juventus went on to win a UEFA Cup and a Coppa Italia double; the following season, he was named the team’s captain, although Juventus lost out on the 1990 Supercoppa Italiana to Serie A winners Napoli. During this period, Juventus were one of the best teams in the world, and Tacconi was also regarded as one of the top goalkeepers in the world. After a ten-year working relationship with Juventus (during the 1985–86 season he was kept on the bench), Tacconi transferred to Genoa C.F.C. in 1992. Unfortunately, Genoa was relegated to Serie B at the end of season. He retired from professional football in 1994. 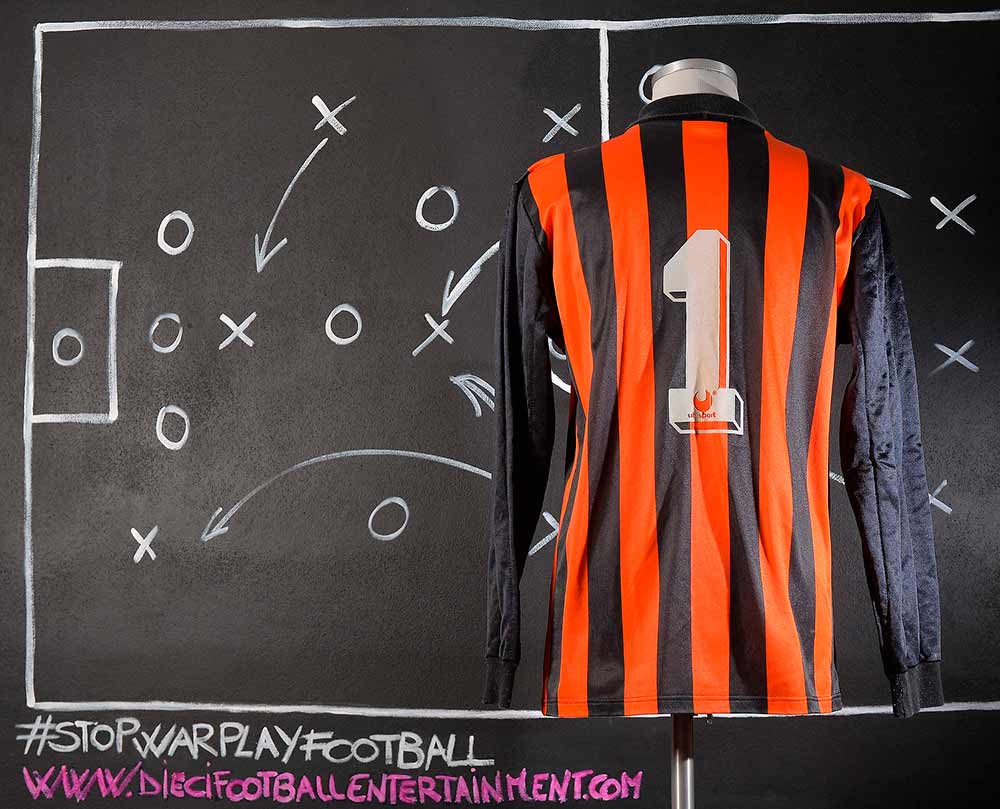 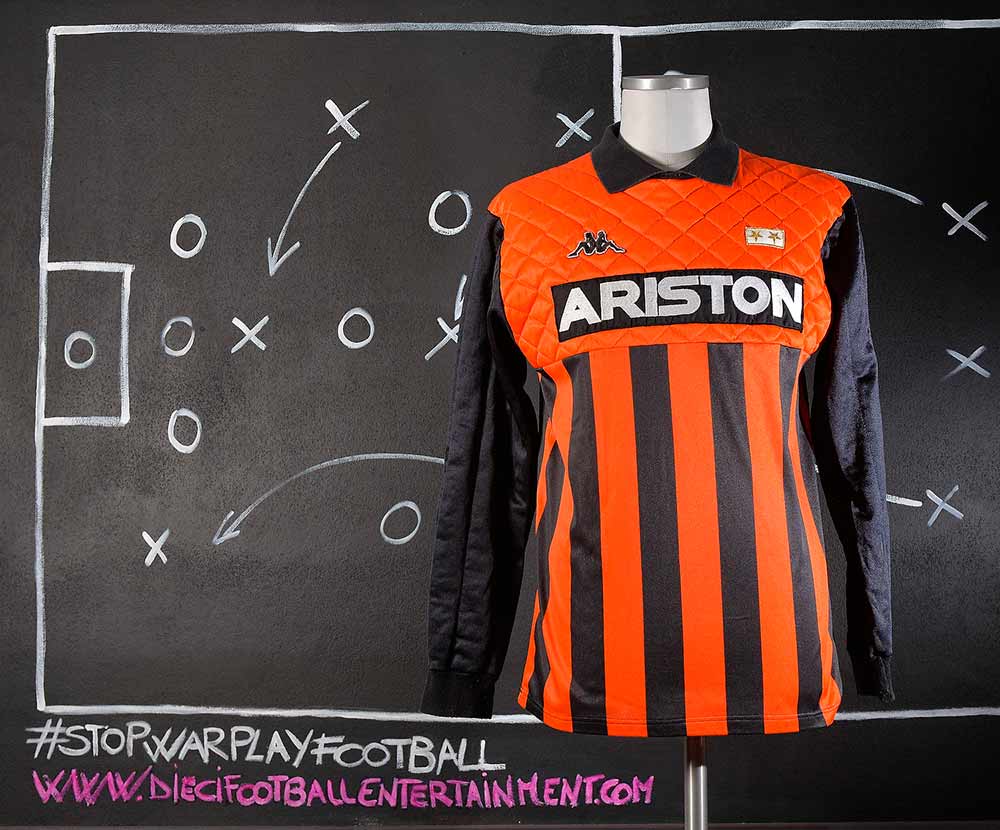 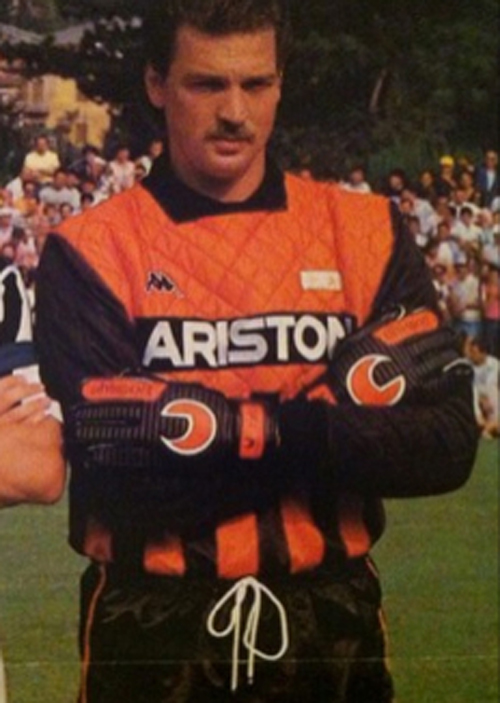 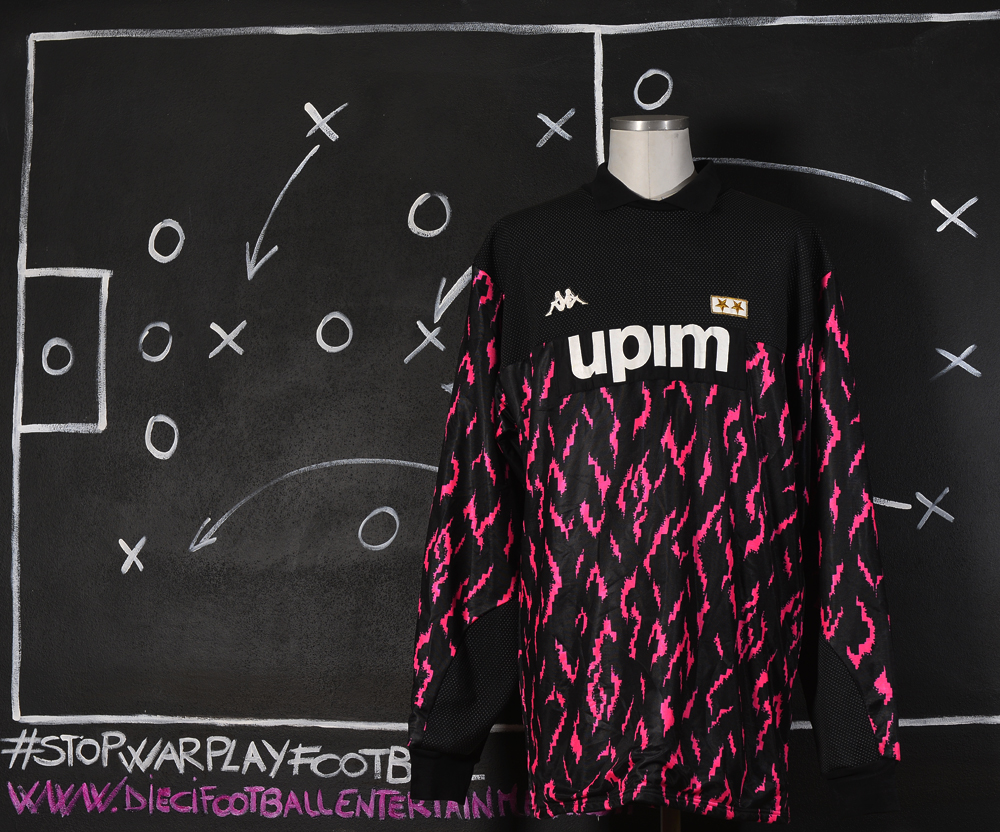 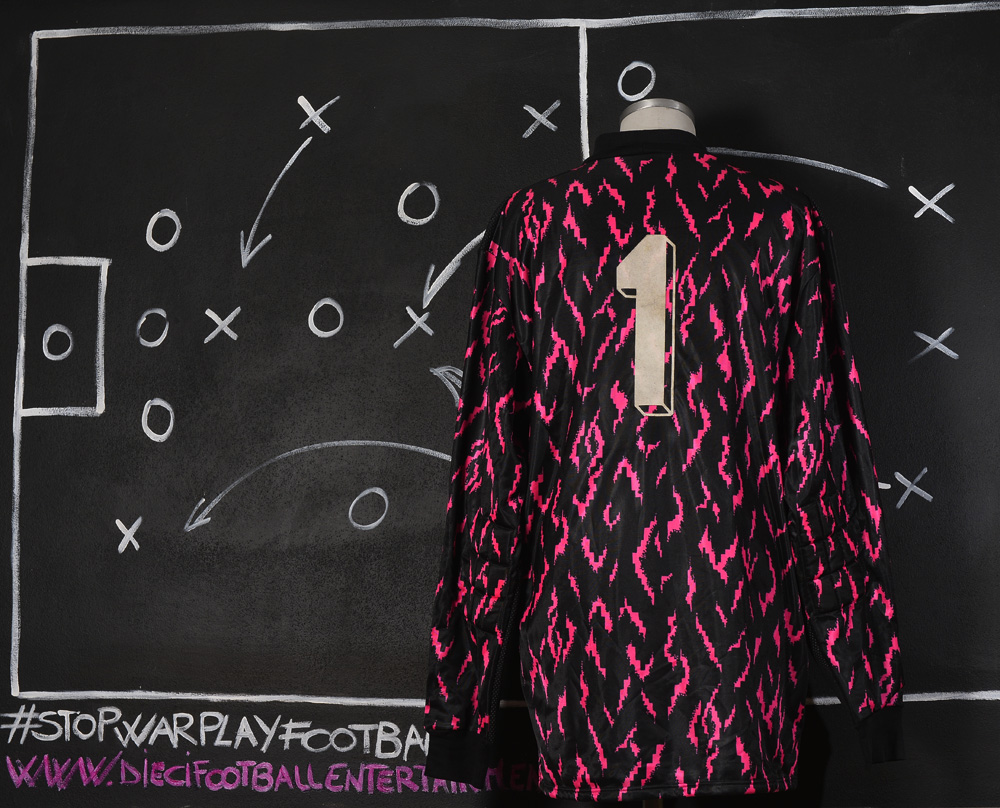 This shirt was worn by Stefano Tacconi during the Serie A game between Juventus and Vicenza which took place in Torino, “Stadio Comunale”, on January 14th 1990. Juventus defeated Verona 2-1. At the end of the game Stefano Tacconi swapped his shirt with his former team mate Luciano Favero whom we got this shirt from. The particularity of this shirt is that it has an inner lining made of another jersey sewn together on the inside out. 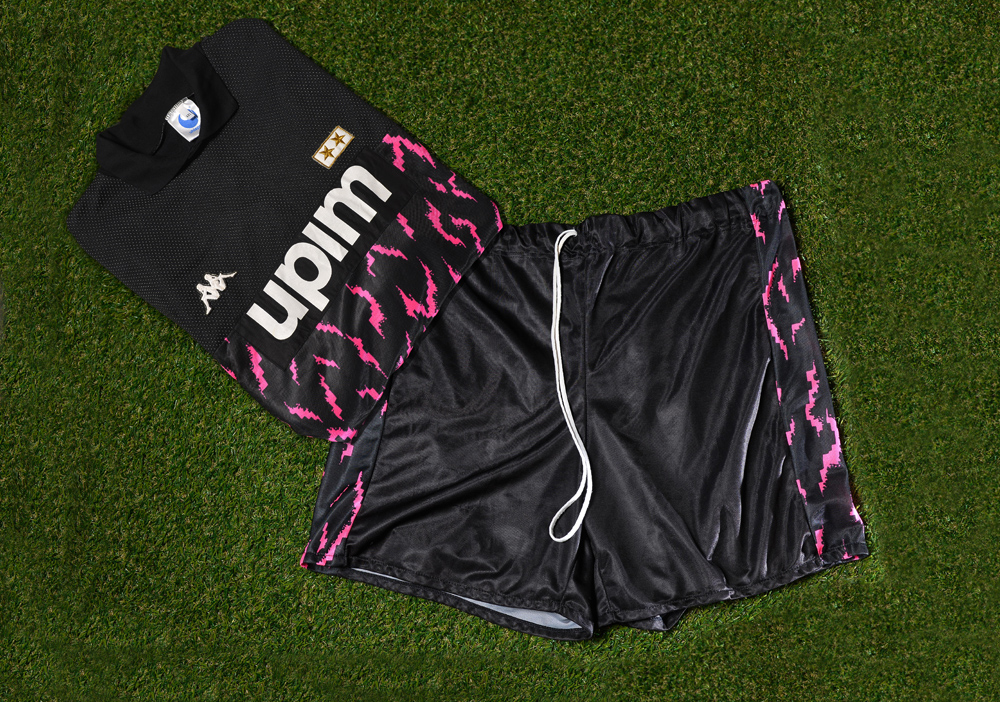 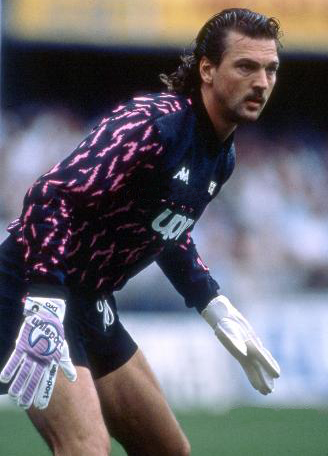 Although not particularly agile, Tacconi was a powerful and athletic goalkeeper, who was known for his consistency and shot-stopping ability. A vocal and commanding presence in goal, he was also known for his leadership and strong character, and often called out defenders for their errors. Although he was initially not known for his ability to come out and collect crosses, he improved upon this aspect of his game in his later career with the help of Zoff. He was also known for his adeptness at stopping penalties. 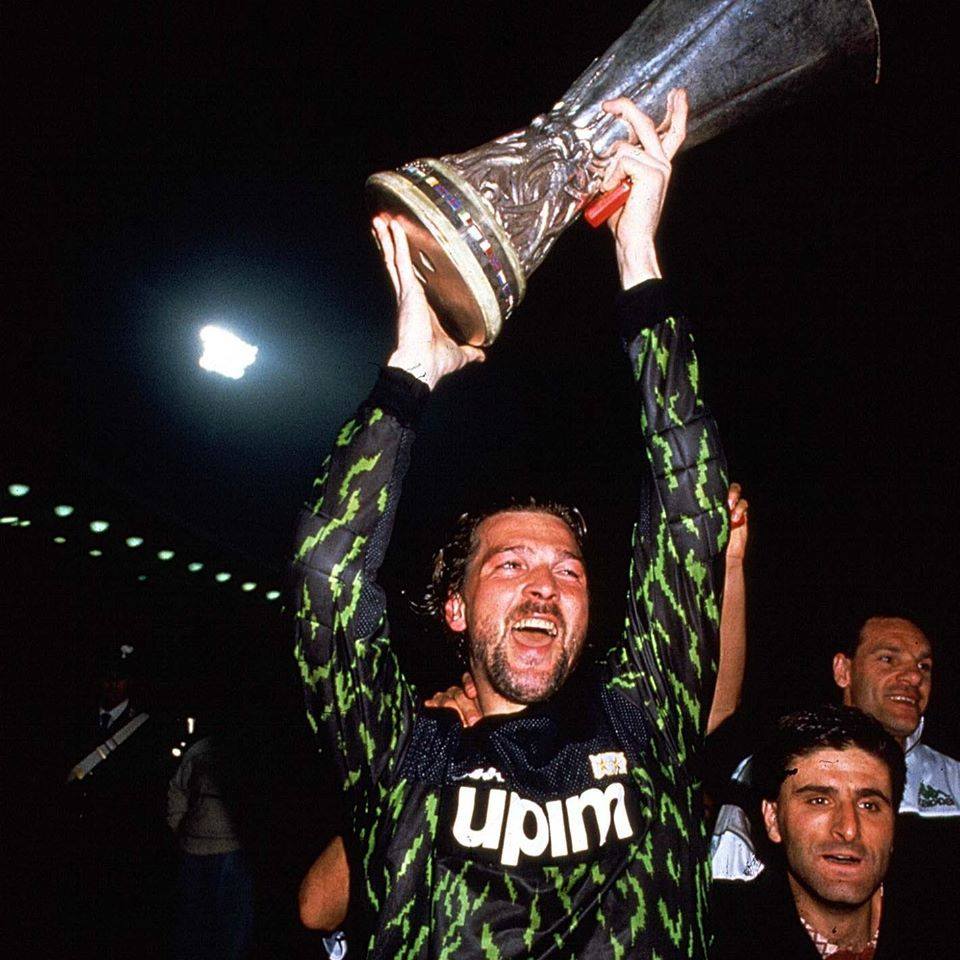 Juventus finished in 4th place in the league this season, but won the Coppa Italia and the UEFA Cup. 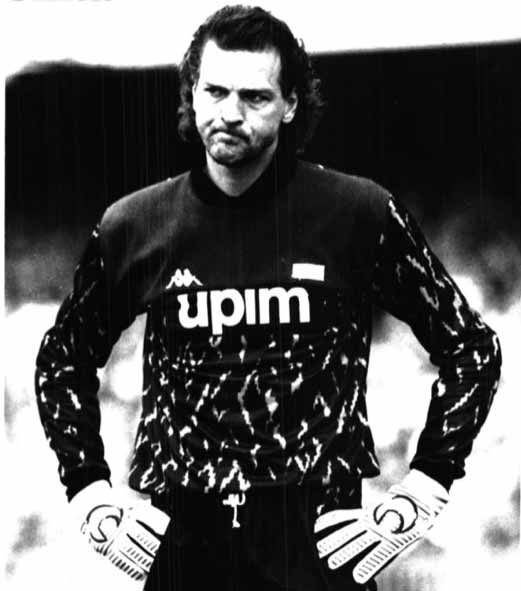 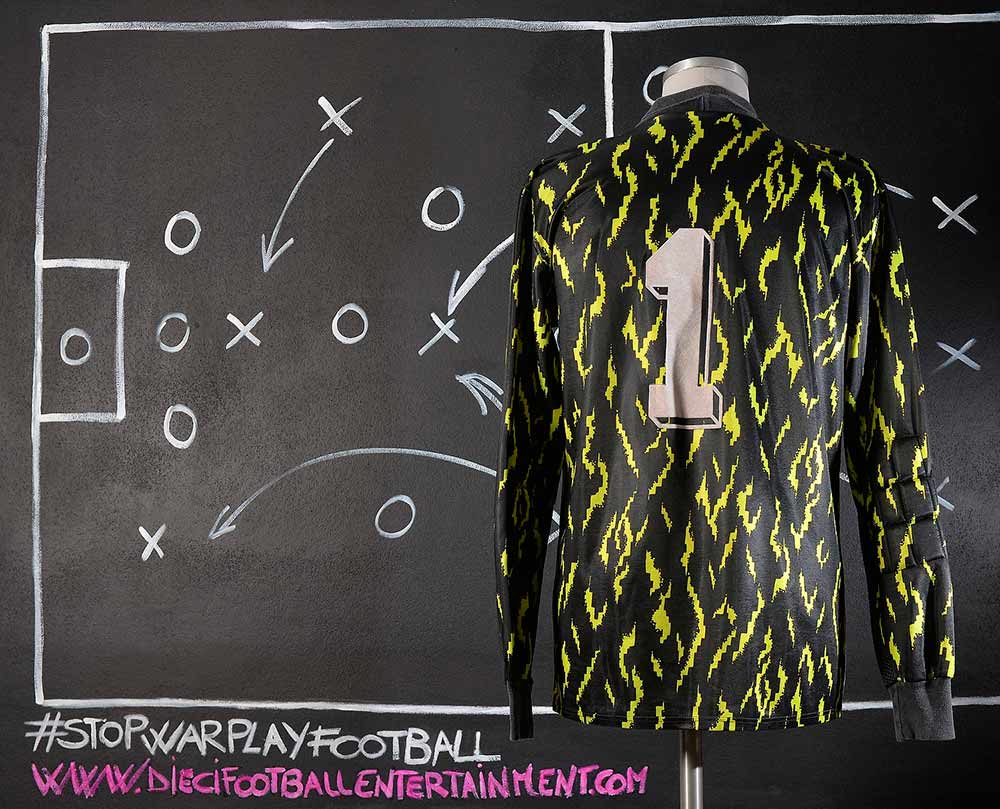 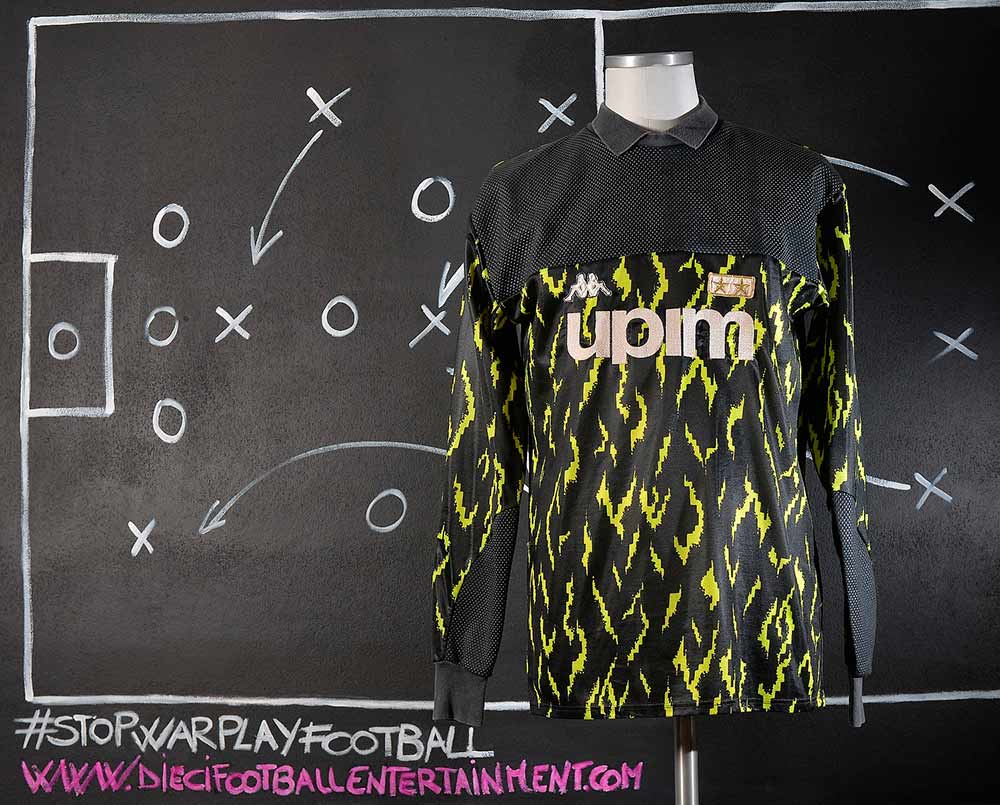 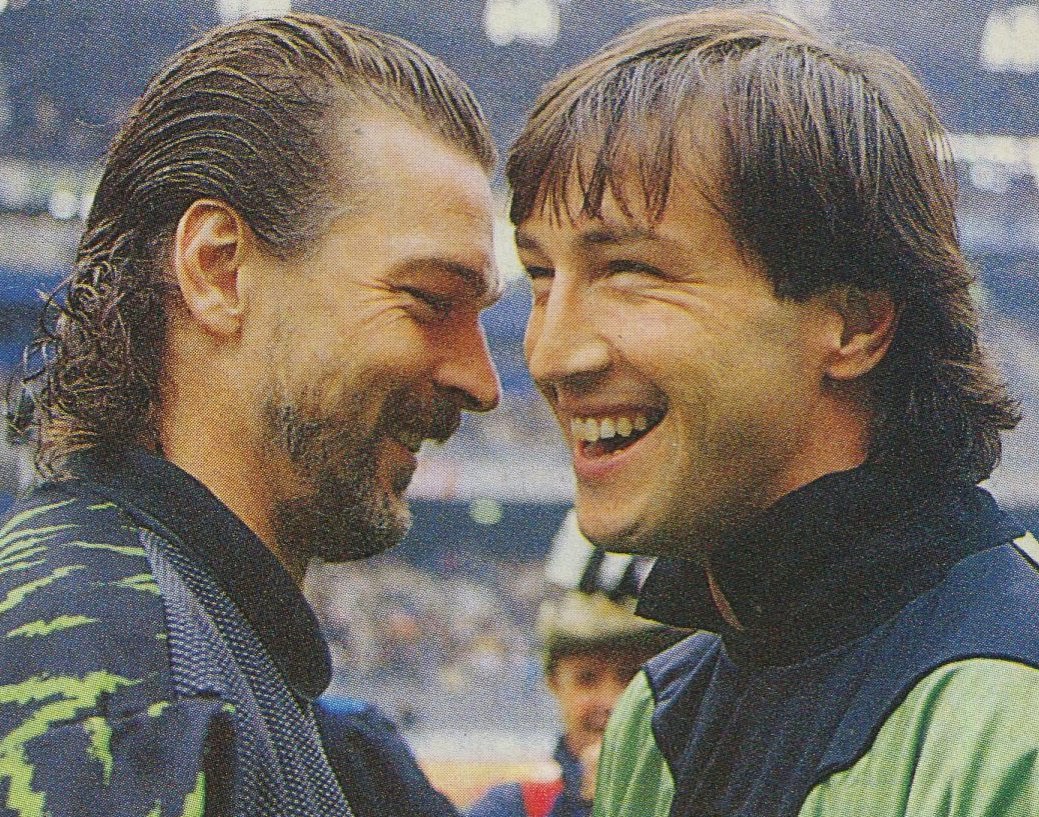 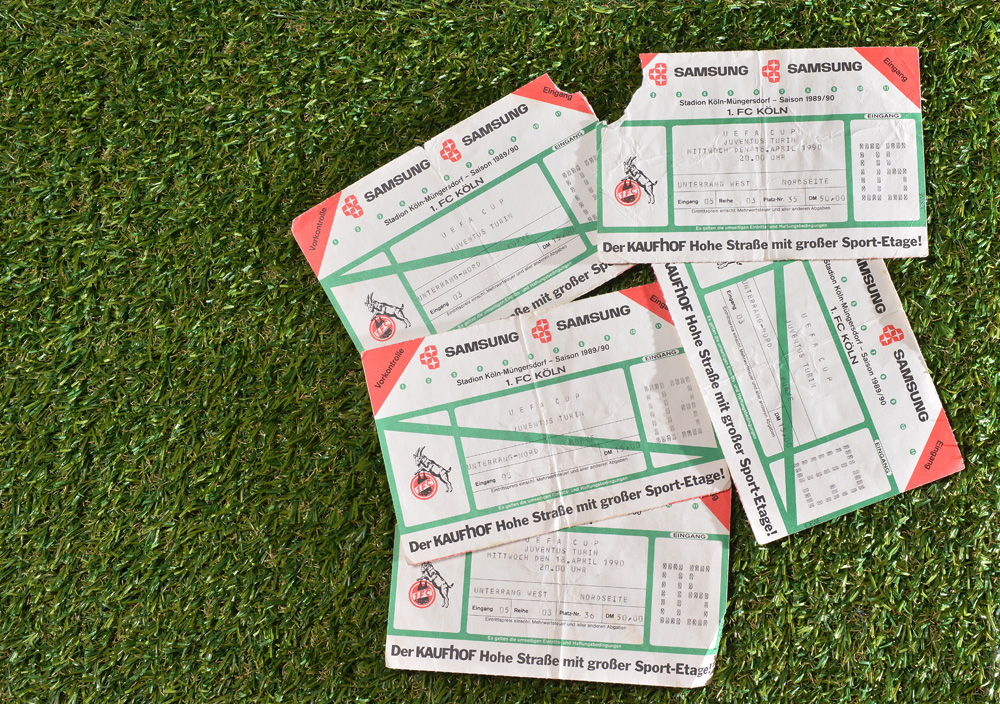 The 1989–90 UEFA Cup was won by Juventus on aggregate over Fiorentina. This was the first final between two Italian sides in the UEFA competitions history and the third between two clubs of the same country. It was the last season for which English clubs were banned from European competitions, as sequel to the Heysel disaster in May 1985. The English clubs who missed out of this season of the competition were Nottingham Forest, Norwich City, Derby County and Tottenham Hotspur. Grosso Grosso2023-01-17T11:39:28+00:00
Page load link
This site uses cookie technology, including third parties' ones. If you want to know more click here. If you access any element of this site outside this banner, you consent to the use of cookies. Ok