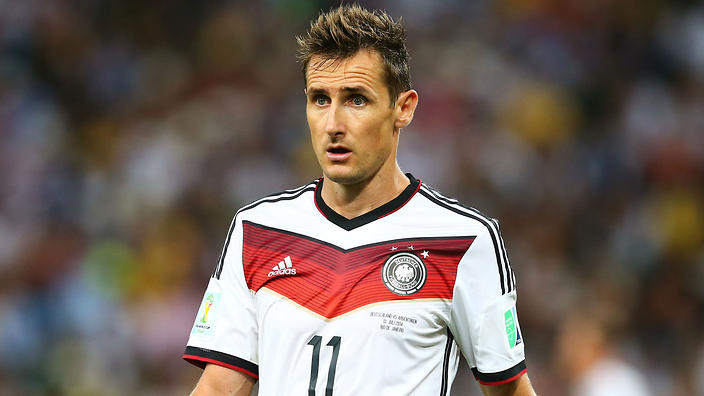 Miroslav Josef Klose is a German retired professional footballer who last played as a striker for Italian club Lazio and Germany. He is currently a member of the Germany national team’s coaching staff. Klose is best known for his performances with the Germany national team. He was part of the German squad that won the 2014 FIFA World Cup, having previously finished second (2002) and third (2006, 2010) in the competition, and as runner-up in UEFA Euro 2008. He is the top goalscorer in the history of the FIFA World Cup, having scored five goals in his debut World Cup in 2002 and having won the Golden Boot at the 2006 World Cup in Germany by again scoring five times. He also scored four times in the 2010 World Cup and twice at the 2014 World Cup, which put him ahead of Ronaldo in the all-time list with 16 goals. Klose is also the top scorer of all time for Germany, which never lost a game in which Klose scored. He retired from Germany’s national team on 11 August 2014 shortly after Germany’s victory at the 2014 World Cup. At club level, Klose has been a less prolific but usually reliable goalscorer. Starting his career at FC 08 Homburg, he played in the Bundesliga for Kaiserslautern, Werder Bremen and Bayern Munich, and in Serie A for Lazio. He won two league titles with Bayern, along with cup competitions at Bayern, Werder Bremen and Lazio. 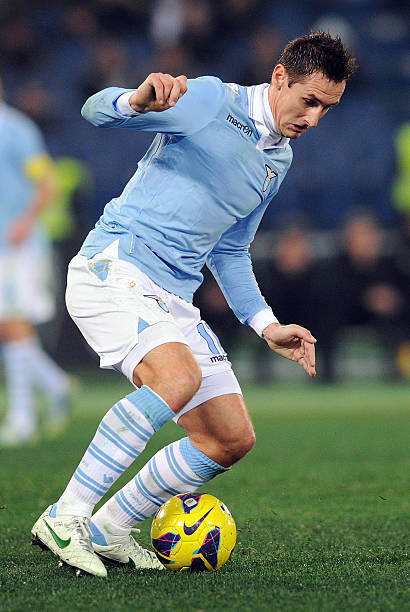 This shirt was worn by Miroslav Klose in the first half of the Tim Cup’s semi final between Lazio and Juventus which took place in Rome, Stadio Olimpico, on January 29th 2013. Lazio defeated Juventus 2-1 and the team went straight to the Final against Roma. On 2 September 2012, Klose scored his first Serie A goal of the season, scoring a brace in Lazio’s 3–0 home win against Palermo. On 26 September, Klose accidentally scored a goal with his hand against Napoli for Lazio, unseen by the referee. However, Klose showed great sportsmanship by informing the referee and asking to discount the goal. The referee then reversed the decision and the goal was discounted. On 2 December, Klose scored his ninth goal of the season, securing a 2–1 victory over Parma, lifting Lazio into fourth place in Serie A. Two weeks later, on 15 December, he scored a late goal to send his side to a 1–0 victory over second-placed Internazionale, reducing the gap between the two sides in the league table to one point. On 5 May 2013, he scored five goals against Bologna before being substituted for Louis Saha in the 68th minute. It was the first time since the 1984–85 season that a player scored five goals in the same game in Serie A. On 26 May, Klose won the Coppa Italia, beating Lazio’s city rivals Roma 1–0, the sixth in Lazio’s history and the first time in the history of the tournament to see a Lazio–Roma derby in the final. 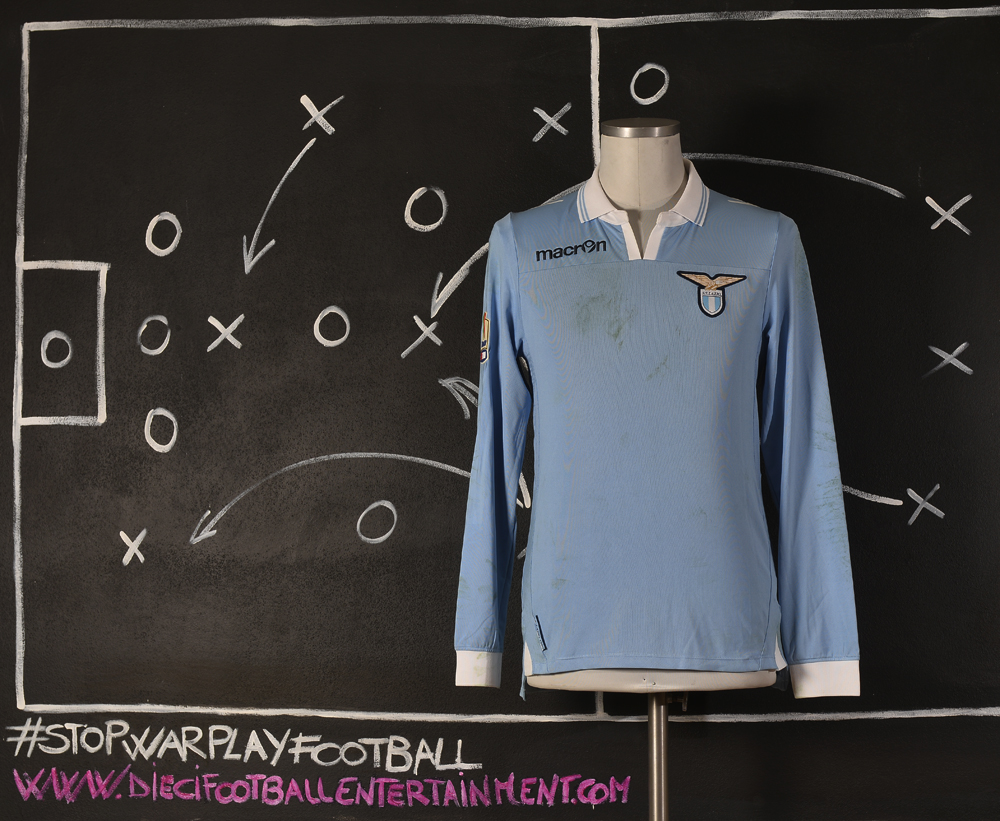 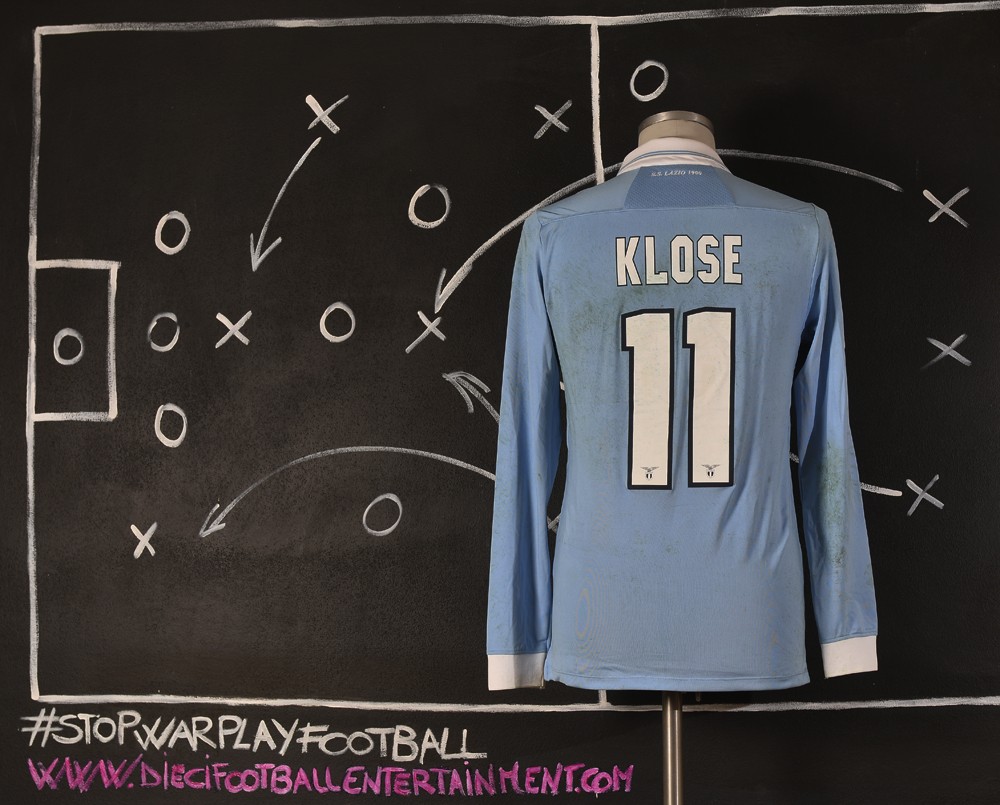 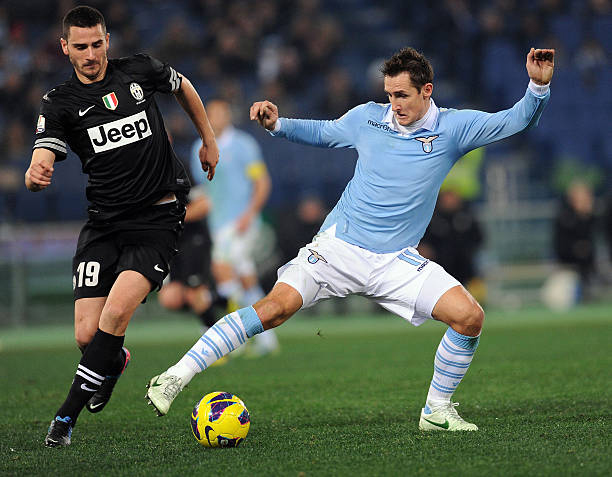 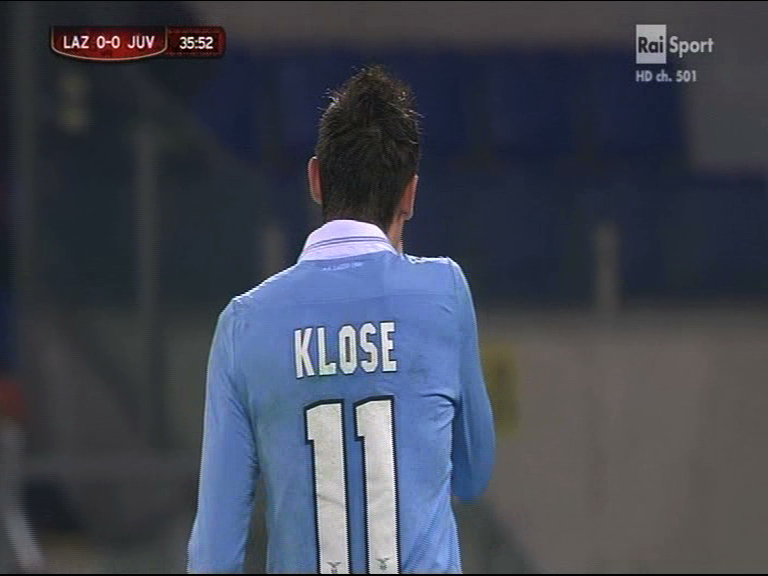 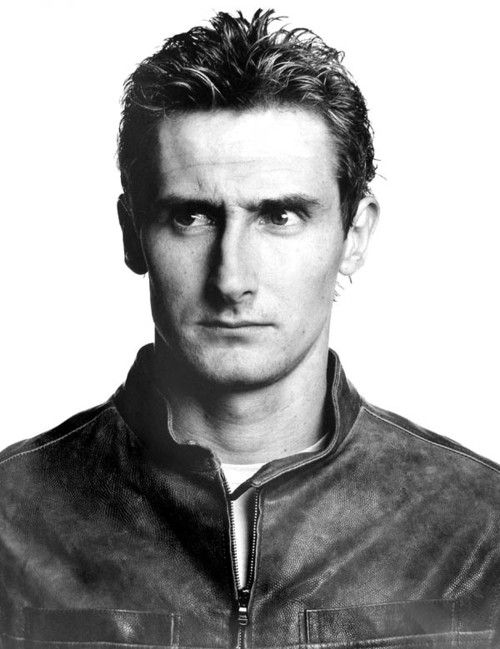 In the 2017 Miroslav Klose is still holding the following records: 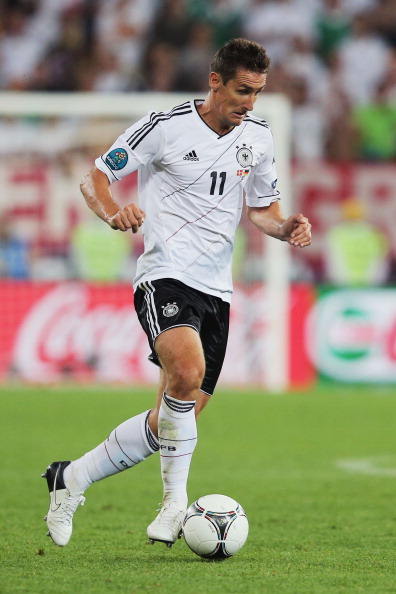 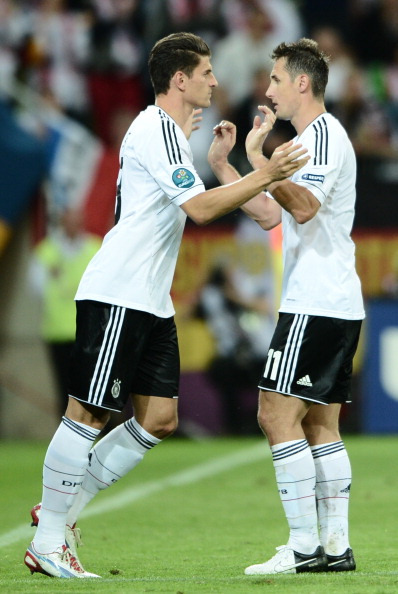 A prolific goalscorer, Klose was a large and powerful striker who was known in particular for his ability in the air as a centre-forward, due to his strength, timing, elevation and heading accuracy, as well as his finishing ability. In his prime, he was also a quick player who was known for his turn of pace and positional sense in the penalty area. In addition to his physical attributes, he possessed good technique, and was capable of setting-up goals for teammates in addition to scoring them himself, due to his tactical intelligence and ability to interpret the game.[88] He was also known for his dedication and correct behaviour on the pitch. Earlier in his career, Klose was known for his acrobatic goalscoring celebrations, which included mid-air somersaults. 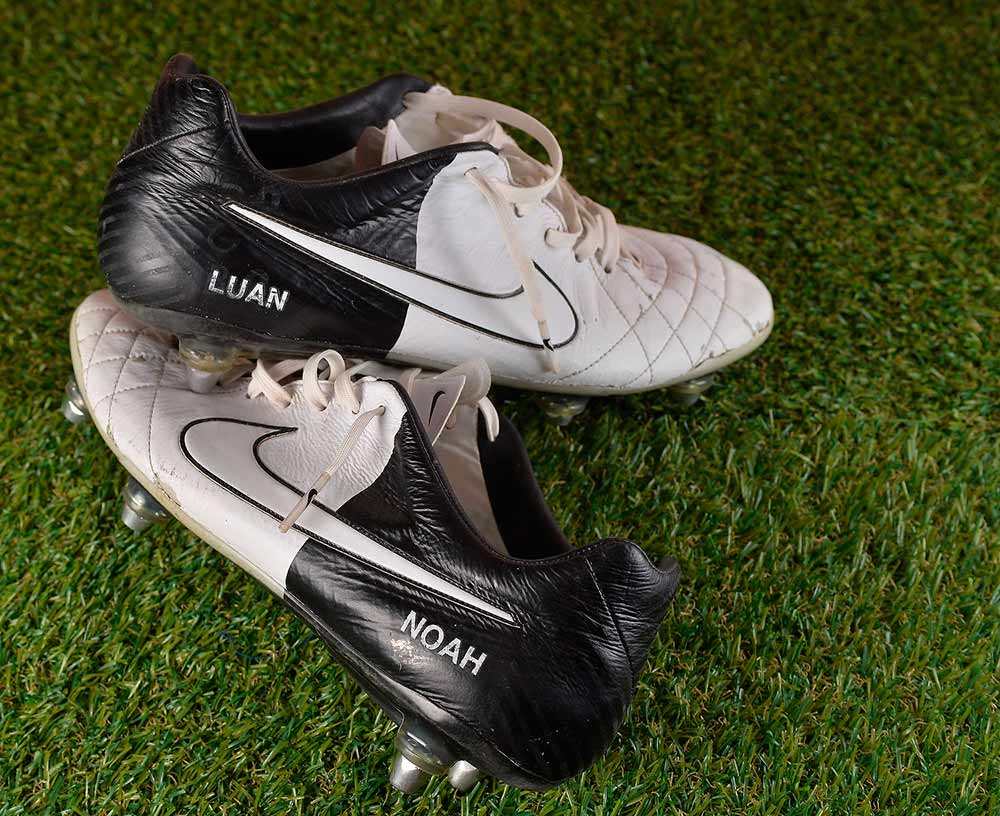 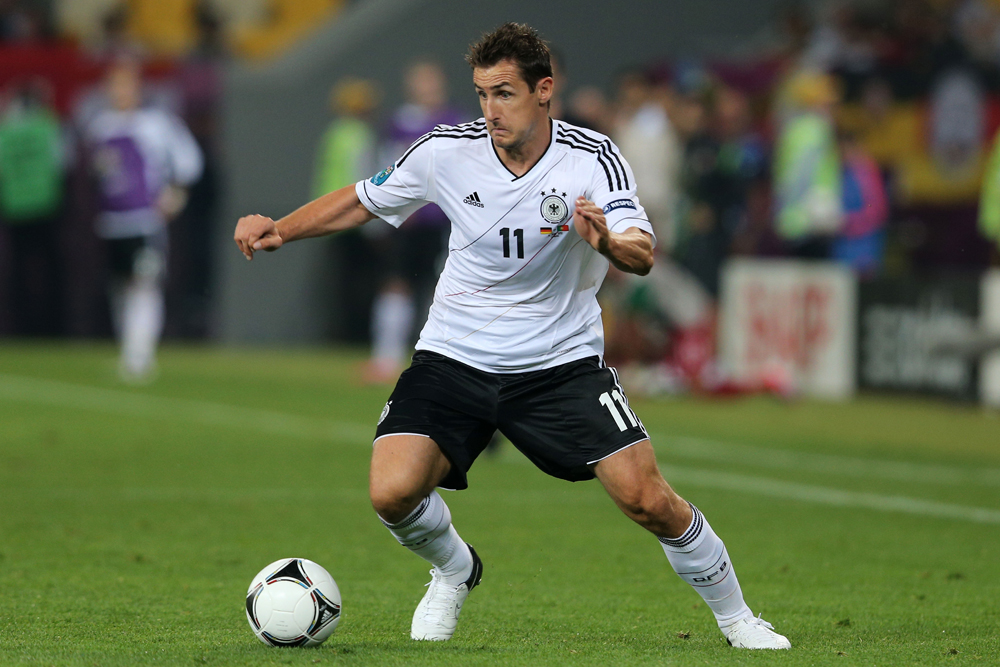 During the Euro 2012 qualifiers, Klose scored at least one goal in every single game he played, striking against all of Germany’s opponents: Belgium, Azerbaijan, Turkey, Kazakhstan and Austria. Gaining only six caps during the qualification campaign, he scored nine goals and provided two assists, making him Europe’s second-most-successful striker for this period behind Klaas-Jan Huntelaar, who scored 12 times in 8 matches. At the end of the qualifying campaign, Klose had achieved 21 assists and 63 goals while playing for Germany, trailing Gerd Müller’s German goalscoring record by five (albeit playing almost twice as many internationals compared to Müller). 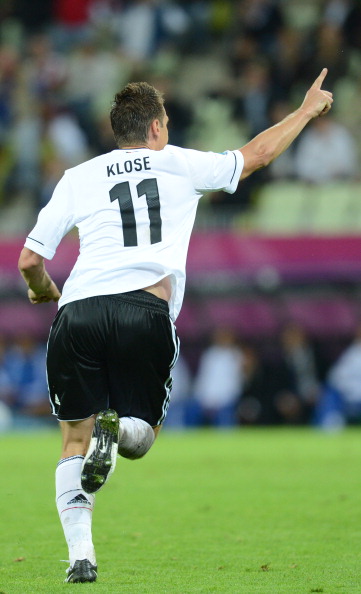 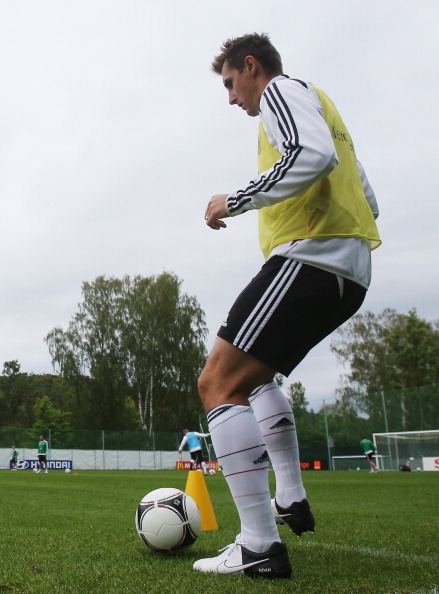 “Napoli? For me it was easy, it’s my character. We need to set an example, … If I can even help out the referees, I will do so willingly” Klose Miroslav

Throughout his career, Klose often stood out for his fair play and honesty in addition to his skill and goalscoring as a footballer. On 30 April 2005, while playing for Werder Bremen, Klose refused to accept a penalty given against Arminia Bielefeld as he felt the decision was incorrect. He was later given a fair play award for his actions, although he had mixed feelings about the award, stating, “It’s a big honour for me to receive this award, but I am also a bit irritated. For me, it was something you should always do. I would do it again – always.” At the end of September 2012, Klose scored a goal using his hand for Lazio against Napoli. He admitted this to the referee, who took back his decision to award the goal, spared Klose from a yellow card and shook his hand. Later that year, he was once again given a fair play award for his actions by the German Football Association, later commenting, “The referee asked me if I had touched the ball with my hand and it was not a problem for me to answer ‘yes’. There are many youngsters who watch football on tv and we are role models for them.” In 2016, he was given the Sport Ethics Award for his honesty at the University of Rome Tor Vergata.

Grosso Grosso2019-12-06T15:57:25+00:00
Page load link
This site uses cookie technology, including third parties' ones. If you want to know more click here. If you access any element of this site outside this banner, you consent to the use of cookies. Ok
Go to Top