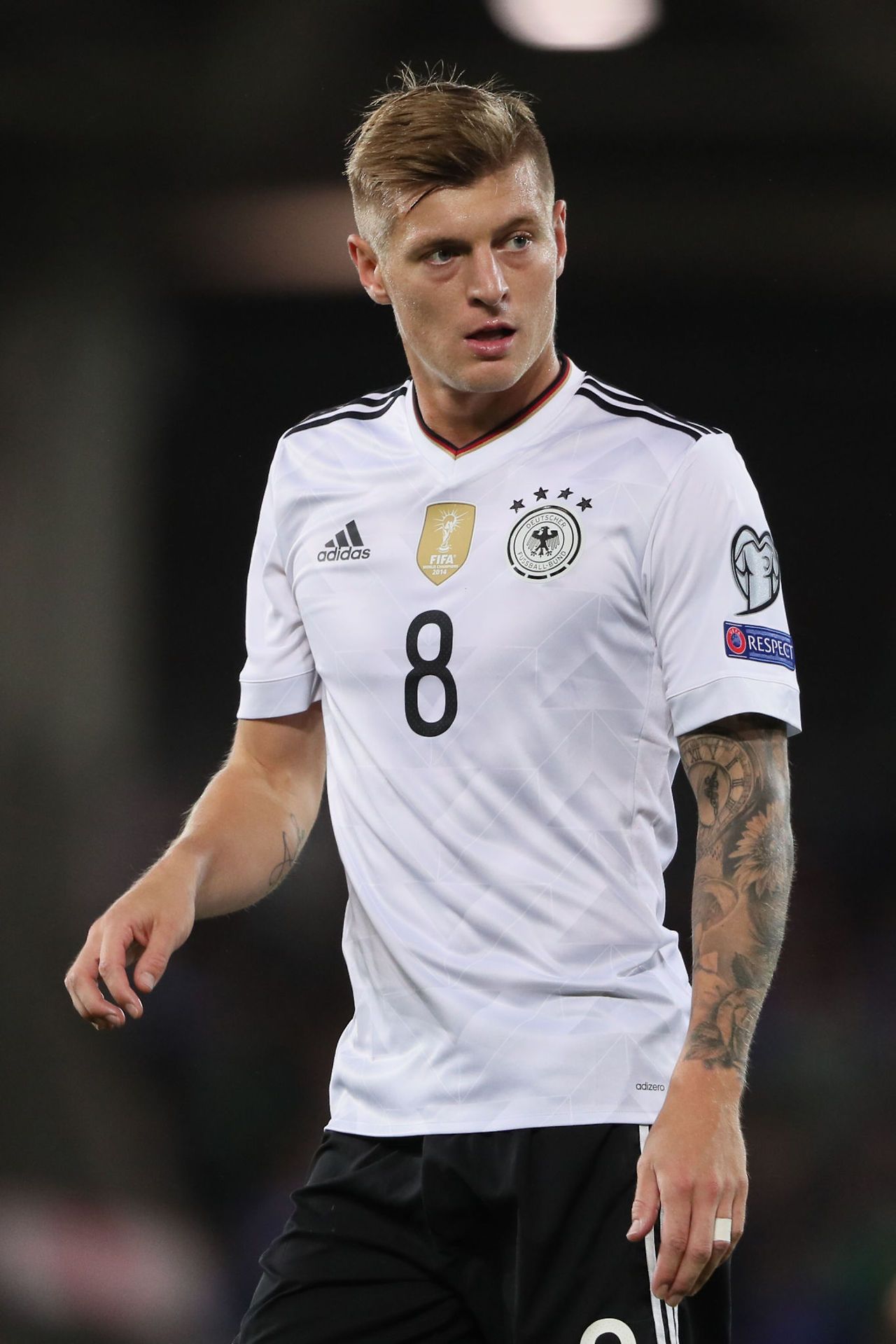 Toni Kroos is a German professional footballer who plays for the German national team. Kroos plays mainly as a central midfielder, but is also used as a defensive midfielder or deep-lying playmaker. He is known for his vision, creativity, passing, and set-piece ability, and is widely considered to be one of the best midfielders in the world. Born in the small German city of Greifswald, Kroos began his senior club career playing for Bayern Munich, where he made his debut at age 17 in 2007. He was sparingly used, and quickly opted for an 18-month loan spell at fellow Bundesliga side Bayer Leverkusen, where he became a key contributor, and returned to his parent club with an increased profile in 2010. Kroos then became indispensable for the Bavarian club, and was critical to several successes, including two consecutive league titles, a UEFA Champions League title, and two DFB-Pokal titles. He was also voted into the league team of the season three times, before moving to Spain to join La Liga side Real Madrid in 2014, for a fee of €25 million. In Madrid, Kroos became a vital part of the team under head coaches Carlo Ancelotti and Zinedine Zidane, and he helped Real win three consecutive Champions League titles from 2015–16 to 2017–18, each time being selected in the squad of the season. He also contributed heavily as the club captured a La Liga title in 2016–17, when he was also chosen for the team of the season. Kroos was also voted into both the FIFPro World XI and UEFA Team of the Year in 2016 and 2017, and has won further championships, including five FIFA Club World Cup titles. In 2018, Kroos was named German Footballer of the Year by a selection of journalists and the publication kicker. After a successful youth international career, in which he won the Golden Player award and finished as top goalscorer in the UEFA European Under-17 Championship in 2006, and won the Golden Ball award for best player at the FIFA U-17 World Cup in 2007, Kroos made his senior debut for Germany in 2010. He scored his first international goal in 2011 in a friendly match against Poland, and has since been key to the national team, appearing in every major tournament Germany has qualified for, beginning with the 2010 FIFA World Cup. In 2014, Kroos led his country to victory in that year’s World Cup, where he was the top assist provider and was selected to the All-Star team and Dream Team. He was also named German Player of the Year. At UEFA Euro 2016, Kroos was voted to the Team of the Tournament. 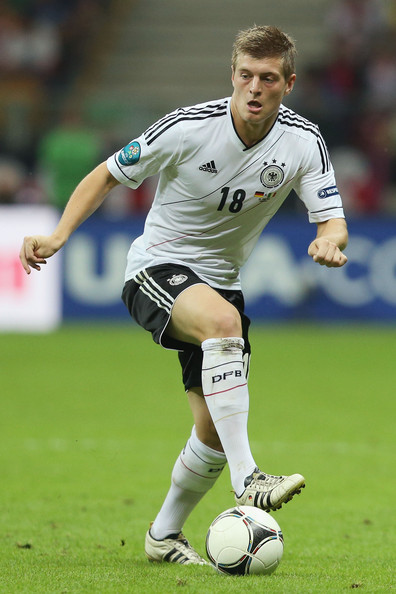 In the summer of 2010, on the expiration of his loan at Bayer Leverkusen, Kroos returned to Bayern Munich. When asked about his first team chances with Bayern, runner-up in the previous season’s Champions League, Kroos stated, “I want to play as often as possible!” On 16 August 2010, he started against Germania Windeck in the first round of the DFB-Pokal, scoring the third goal in a 4–0 victory. On 29 October 2010, he scored his first league goal for the club, in a 4–1 win for the Bavarians against SC Freiburg. During the 2010–11 season, Kroos was a regular starter for Bayern in the Bundesliga, DFB-Pokal and Champions League. He ended the season with 37 appearances in all competitions. During 2011–12, under Jupp Heynckes, his former coach at Leverkusen, Kroos established himself as a first choice player from Bayern, forming a strong midfield partnership with national team colleague Bastian Schweinsteiger. He played 51 matches in all competitions during the season, including the 2012 UEFA Champions League Final, where Bayern were beaten on penalties by Chelsea at the Allianz Arena. Kroos was an important member of Bayern’s treble-winning team during the 2012–13 season. As the most advanced member of a midfield containing Schweinsteiger and Javi Martínez, Kroos scored three goals in the team’s opening four Bundesliga matches. He also scored his first Champions League goal in Bayern’s opening group match against Valencia. After sustaining an injury in the first leg of the Champions League quarter-final against Juventus, Kroos was unavailable for the remainder of the season, missing Bayern’s successes in the 2013 UEFA Champions League Final, the 2013 DFB-Pokal Final and the last seven matches of the Bundesliga season. Kroos returned to fitness for the start of the 2013–14 season and, played in the German Super Cup and the UEFA Super Cup. On 4 October 2013, scored his first goal of the season in a 1–1 draw against former club Bayer Leverkusen in the Bundesliga. He started two matches for Bayern in the 2013 FIFA Club World Cup. The first against Guangzhou Evergrande in the 3–0 semi-final win on 17 December 2013, and in the final as the team beat Raja Casablanca 2–0. On 19 February 2014, Kroos scored his second goal of the season in a 2–0 Champions League win against Arsenal. On 25 March, he scored in a 3–1 win over Hertha BSC as Bayern were confirmed as Bundesliga champions. 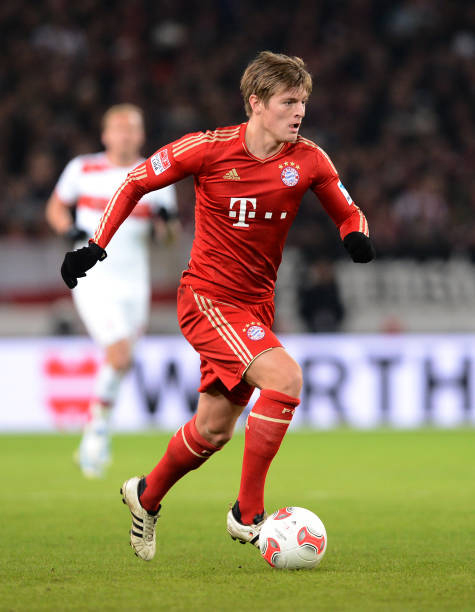 These boots were also used by Toni Kroos during Euro 2012. Kroos established himself as a regular starter in Germany’s qualification campaign for the tournament, playing in eight out of a possible ten games. Germany won all ten qualifying matches to top group A. After qualification was already ensured, Kroos scored his first two international goals, both with his strong right foot. Notably, both Kroos’ goals were Germany’s first after falling behind in the respective matches, both of which were drawn away friendlies, against the two Euro 2012 hosts – Poland and Ukraine. National coach Joachim Löw also praised him: “How Toni distributes the ball, how he receives it, is very good. He’s technically excellent … He has made progress in the last few matches, I’m extremely satisfied with the player.” At the tournament finals, Kroos appeared as a substitute in all three of Germany’s Group B matches. For the semi-final match against Italy, Löw selected the naturally attacking Kroos to man mark Italy’s playmaker Andrea Pirlo. The decision was heavily criticised as Germany lost the match 2–1. Kroos is has his dogs names Julius and Lennox printed on his boots. These boots were also used with Bayern Munich and they are very recognizable from the pictures beside where you can see exactly the same scratches on the boots he wears. 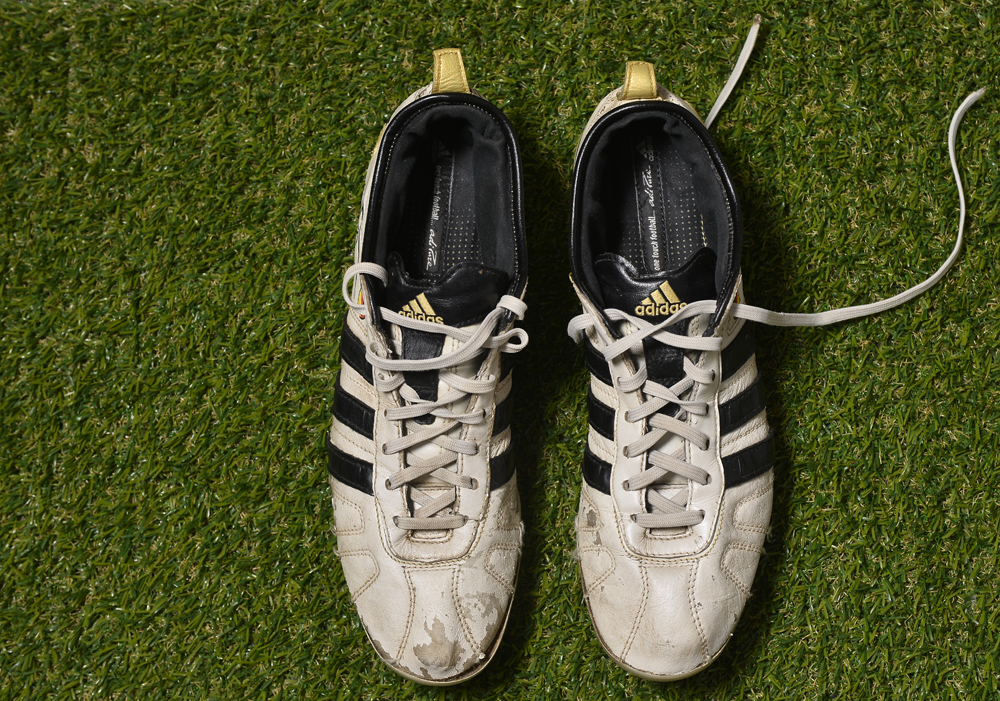 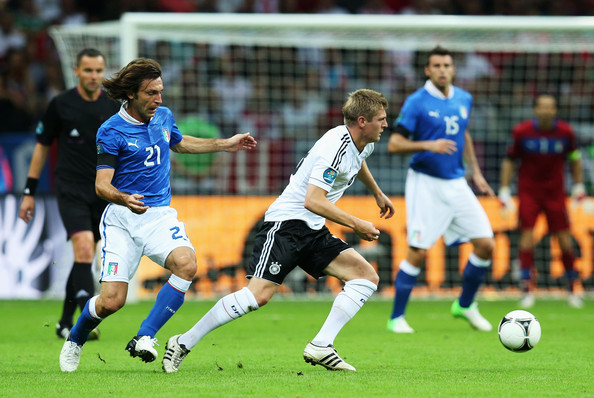 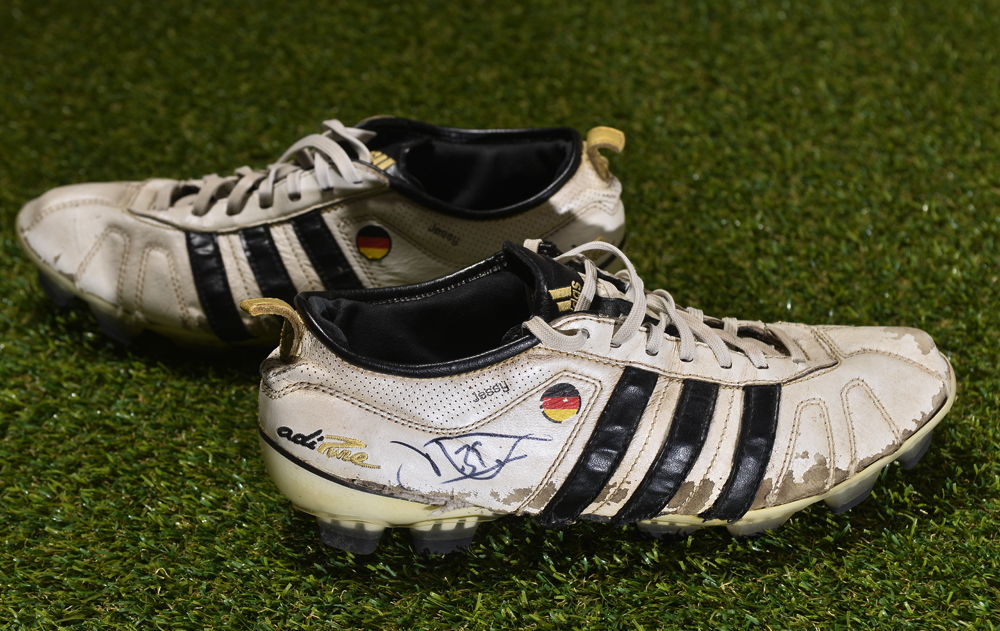 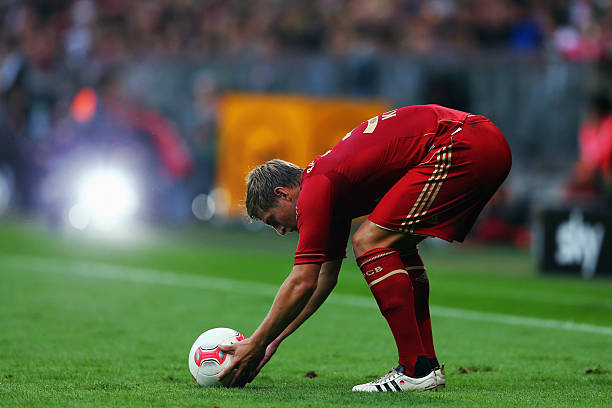 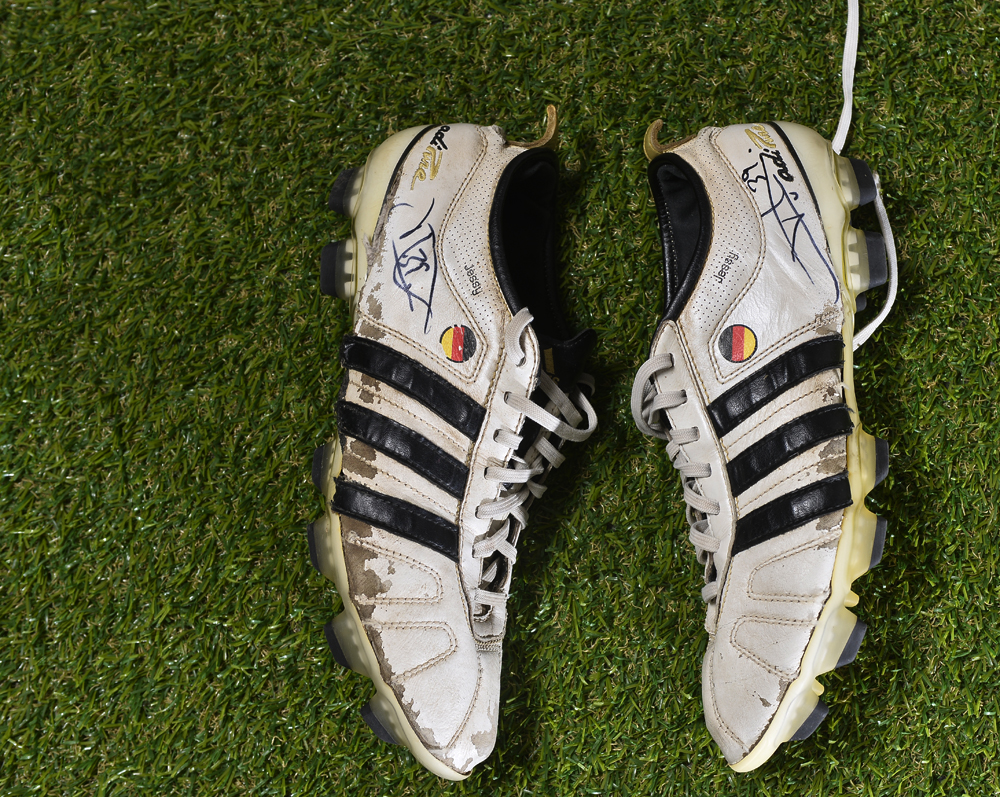 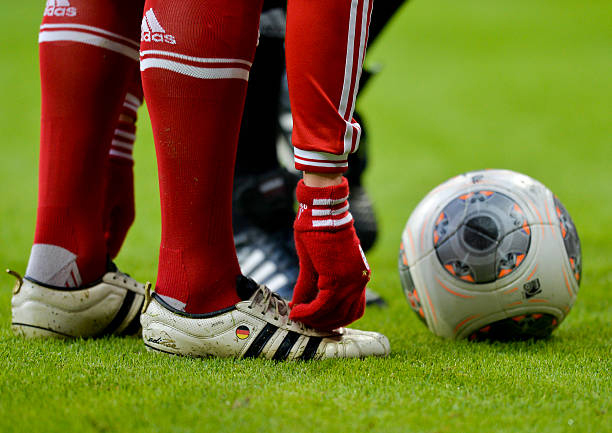 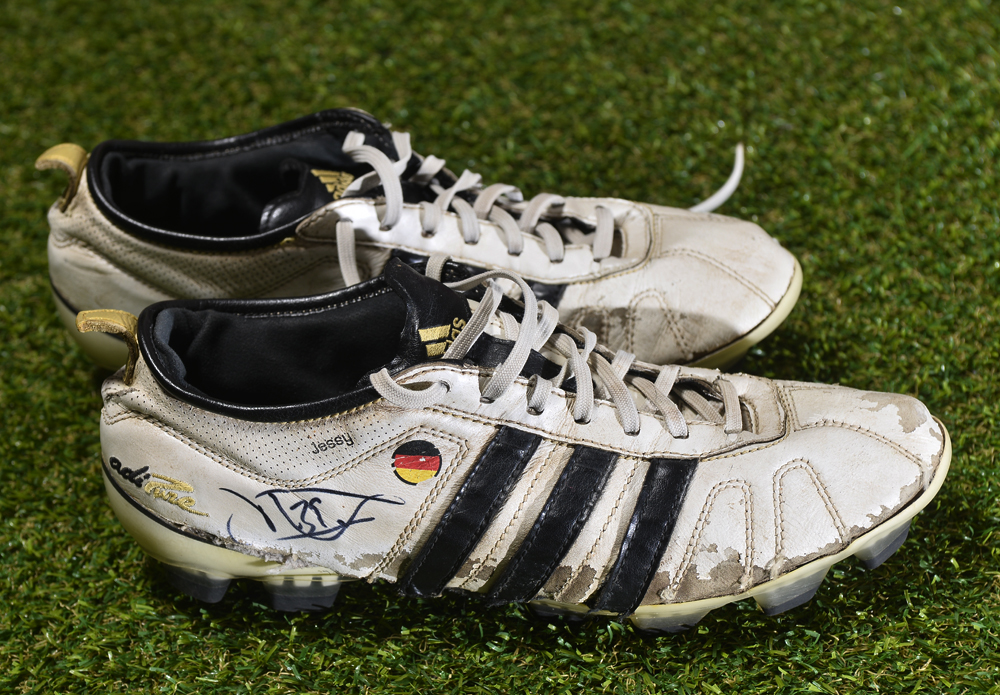 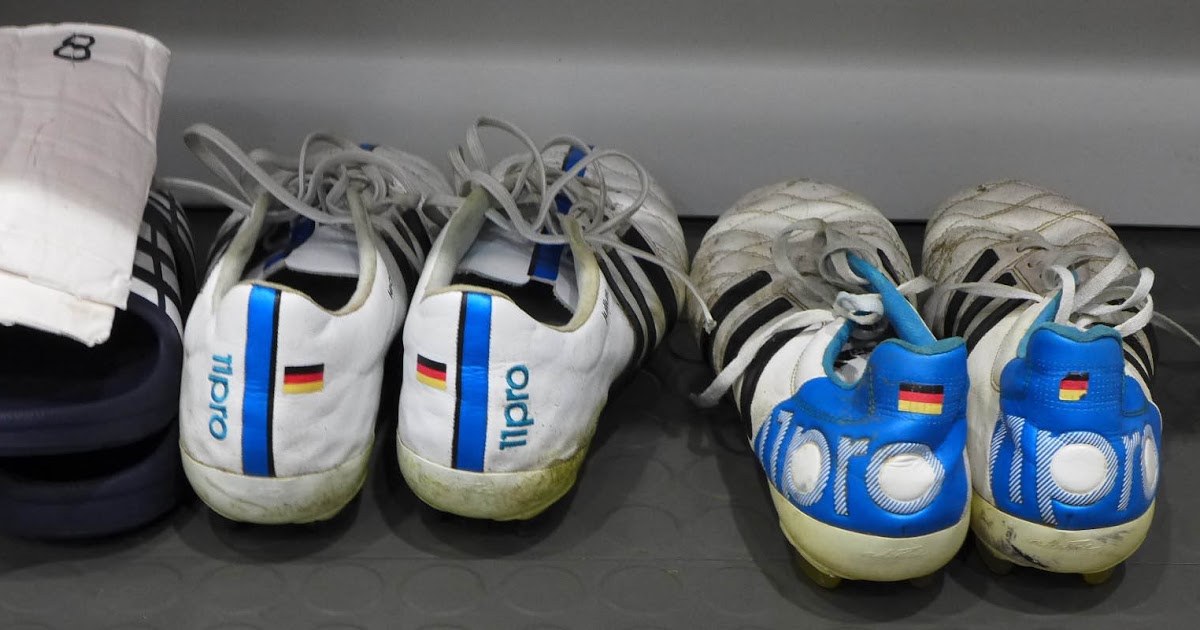 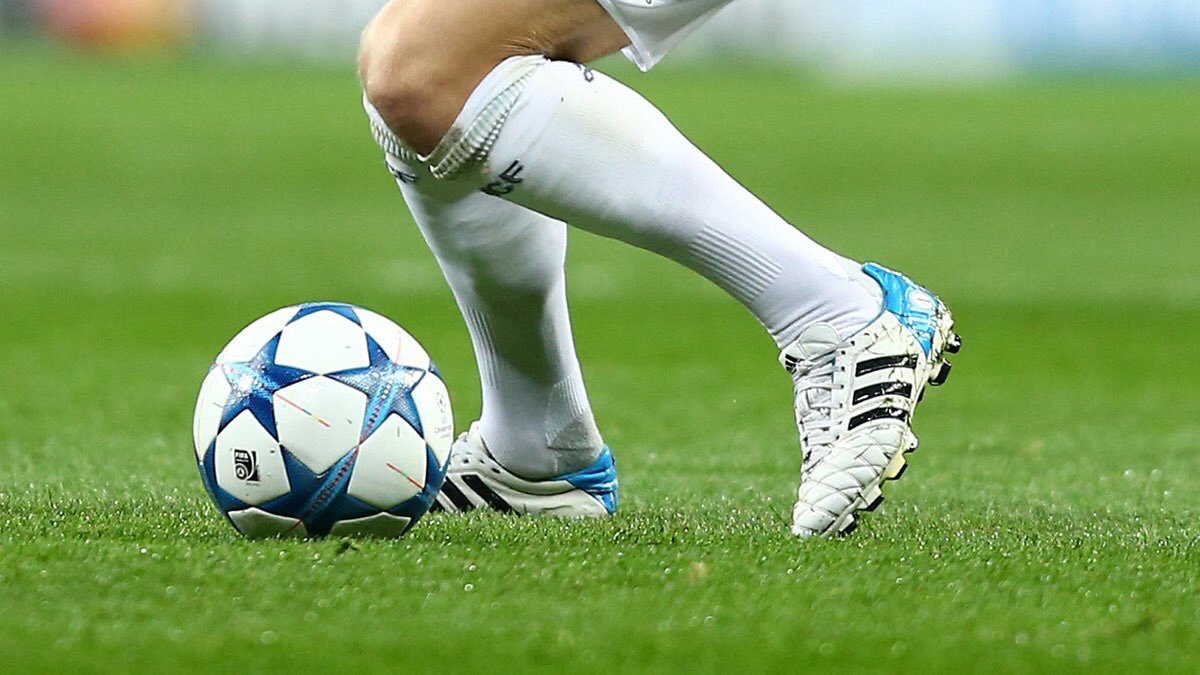 While the era of new and flashy boots is the trending topic to this date, Real Madrid’s midfield maestro Toni Kroos is defying all odds. Have you ever gave a closer look to the German’s cleats? We assume no, hence, here is a quick glance at it. The 27-year-old midfielder has two cleats in his closet; the 2013 Adidas Adipure 11pro Boots, and the Adidas Adipure 11pro 2014. Both of them are almost identical, however, differs with respect to the leather and stitching material. The boots are years old, compared to the current standard of the footballing world, and the German manufacturers Adidas have ceased the production of those models, but the Real Madrid midfielder has convinced them to make some special editions (of the same model) for him.  The biggest shocker in the occurrence is the fact that Kroos has been wearing those cleats since his Bayern Munich days. They are simple, they are elegant – just like Toni Kroos. There are some claims that the reason behind this is his Grandmother got these shoes for him before she died. The German switched to the Adipure 11pro (released in 2011) in the 2014 World Cup and since then, he has been a one-boot man. Regarded as one of the most underrated players in the industry, Kroos surely has done and an eye-opening act.

Grosso Grosso2020-01-09T16:38:30+00:00
Page load link
This site uses cookie technology, including third parties' ones. If you want to know more click here. If you access any element of this site outside this banner, you consent to the use of cookies. Ok
Go to Top