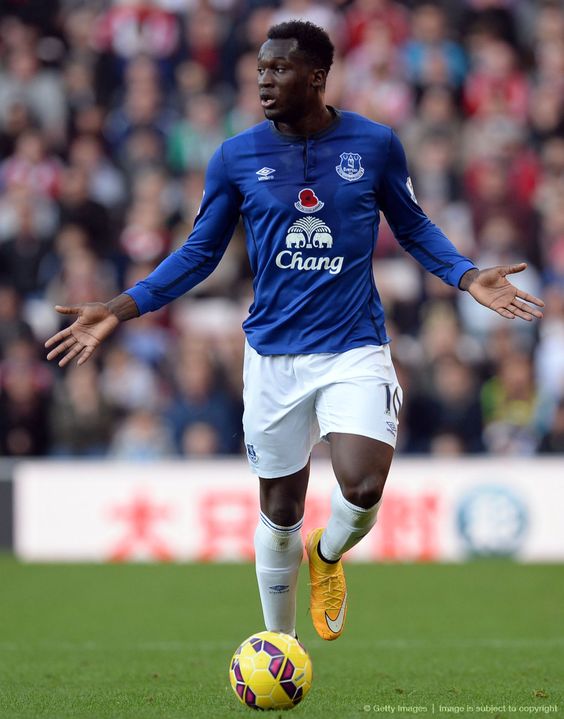 Lukaku signed a five-year deal with Everton in July 2014 for a club record fee of £28 million, and he was assigned the number 10 shirt. He scored his first goal as a permanent player on 13 September, against his former club West Brom. Lukaku did not celebrate the goal, and was applauded by the West Brom fans for his sign of respect. On 19 February 2015, Lukaku scored his first Everton hat-trick in a 4–1 win for Everton against BSC Young Boys in the UEFA Europa League last 32; he struck with a header, a right-foot shot and a left-foot shot. He added another two goals in a 3–1 win in the second leg a week later. With eight goals, he was the tournament’s joint highest scorer that season, alongside Alan of red Bull Salzburg. In the second game of the 2015–16 Premier League season, Lukaku scored a first-half double in Everton’s 0–3 win at Southampton on 15 August 2015 with his first two shots on target. Before the match, he presented a T-shirt to a home fan whom he had accidentally struck with the ball during shooting practice. On 26 August, he scored another brace in a 5–3 extra-time win over League One side Barnsley in the League Cup. On 28 September, Lukaku scored twice and assisted the other against West Brom as he managed to guide his team from losing 2–0 to winning 2–3. He scored against Liverpool the following week in a 1–1 draw at Goodison Park. On 21 November, Lukaku scored twice in a 4–0 win over Aston Villa, becoming the fifth player under 23 years of age to score at least 50 Premier League goals, after Robbie Fowler, Michael Owen, Wayne Rooney and Cristiano Ronaldo. On 7 December, Lukaku scored a close-range goal in a 1–1 draw against Crystal Palace, his 50th in 100 appearances in all competitions for Everton. On 12 December, Lukaku became the first Everton player to score in six consecutive Premier League matches, and the first to score in seven consecutive matches in all competitions since Bob Latchford 40 years previously, when he opened the scoring in the Toffees’ 1–1 draw with Norwich City at Carrow Road. In his next match, a 3–2 defeat to Leicester City, Lukaku became the first Everton player since Dave Hickson in 1954 to score in eight consecutive matches. On 6 February 2016, Lukaku scored his 20th goal of the season in a 0–3 victory at Stoke City, meaning he was the first Everton player since Graeme Sharp to score at least 20 goals in all competitions in consecutive seasons for Everton. The strike was also his 16th league goal of the season, equalling Premier League goal scoring records for Everton set by Tony Cottee and Andrei Kanchelskis in the mid-1990s. Lukaku followed this goal with another strike in a 0–2 victory at AFC Bournemouth’s Dean Court for his 21st goal of the season. This victory sent Everton into the quarter-finals of the FA Cup, and equalled the number of goals scored in all competitions by Yakubu for Everton in the 2007–08 season, the previous best in the Premier League era. On 1 March, Lukaku scored in a 1–3 victory against Aston Villa at Villa Park, his 17th league goal of the season, a Premier League-era record for Everton. The goal also meant Lukaku had equalled his previous best goal return in a league season, set during his loan spell at West Brom in the 2012–13 season. On 12 September 2016, Lukaku scored his first goals of the 2016–17 season with all three goals in a 3–0 against Sunderland at the Stadium of Light. His goals were scored in 11 minutes and 37 seconds, making it the 12th-fastest hat-trick in Premier League history. On 4 February 2017, Lukaku scored four goals, the first of which was Everton’s fastest ever Premier League goal, against Bournemouth in a 6–3 victory at Goodison Park. It was also the 300th hat-trick scored in the Premier League. On 25 February 2017, he equalled Duncan Ferguson’s club record for Premier League goals, scoring his 60th EPL goal for the Toffees in a 2–0 victory over Sunderland at Goodison Park. On 5 March, he surpassed Ferguson to become the outright record holder, scoring in a 3–2 loss against Tottenham Hotspur away at White Hart Lane. In the next match, a 3–0 home win against West Brom, Lukaku scored to become the first Everton player since Bob Latchford to score 20 or more goals in all competitions for three consecutive seasons. A week later, during a 4–0 victory over Hull City, he scored twice to take his league goals tally to 21 for the season, thereby becoming the first Everton player since Gary Lineker 31 years previously to surpass 20 league goals in a season, as well as being the fourth player and first foreign player to score 80 Premier League goals before the age of 24. In March 2017, Lukaku turned down a new five-year contract worth a reported £140,000 a week amidst rumours of a return to Chelsea. In an interview, he questioned the club’s ambition to make big transfers and chase Champions League qualification, offending his manager Ronald Koeman. A goal in a 3–1 win for Everton against Burnley on 15 April meant Lukaku was the first Everton player since Bob Latchford to score 25 goals in two consecutive seasons in all competitions, and the first player since the legendary Dixie Dean to score in nine consecutive matches at Goodison Park. On 20 April 2017, Lukaku was named in the PFA Team of the Year for the first time. He was also included in the six player shortlists for the PFA Players’ Player of the Year and PFA Young Player of the Year awards. 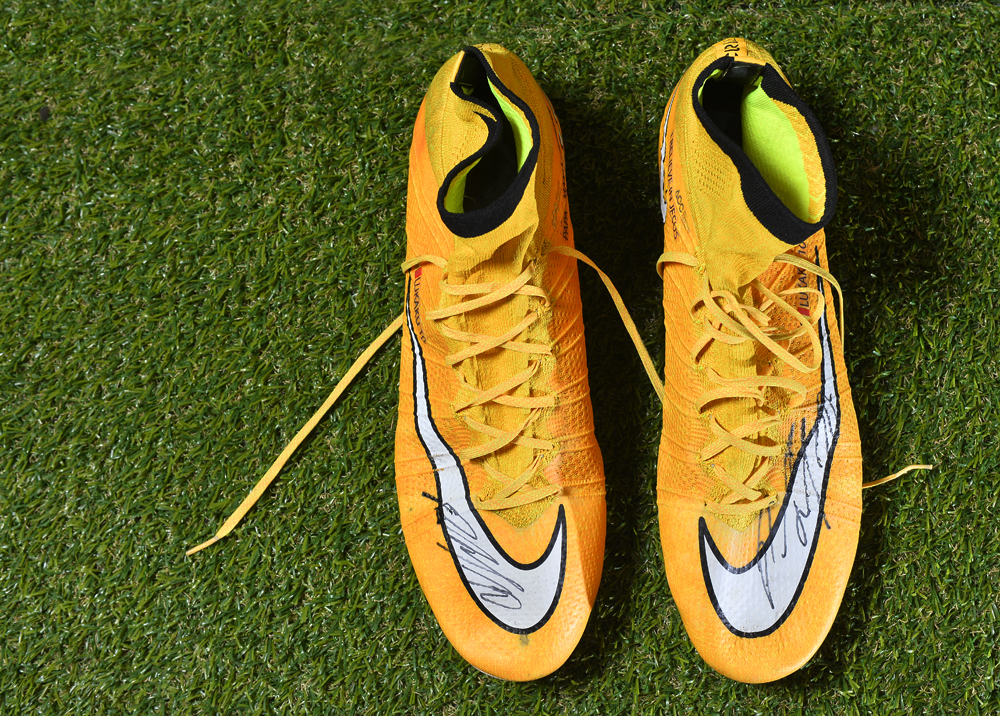 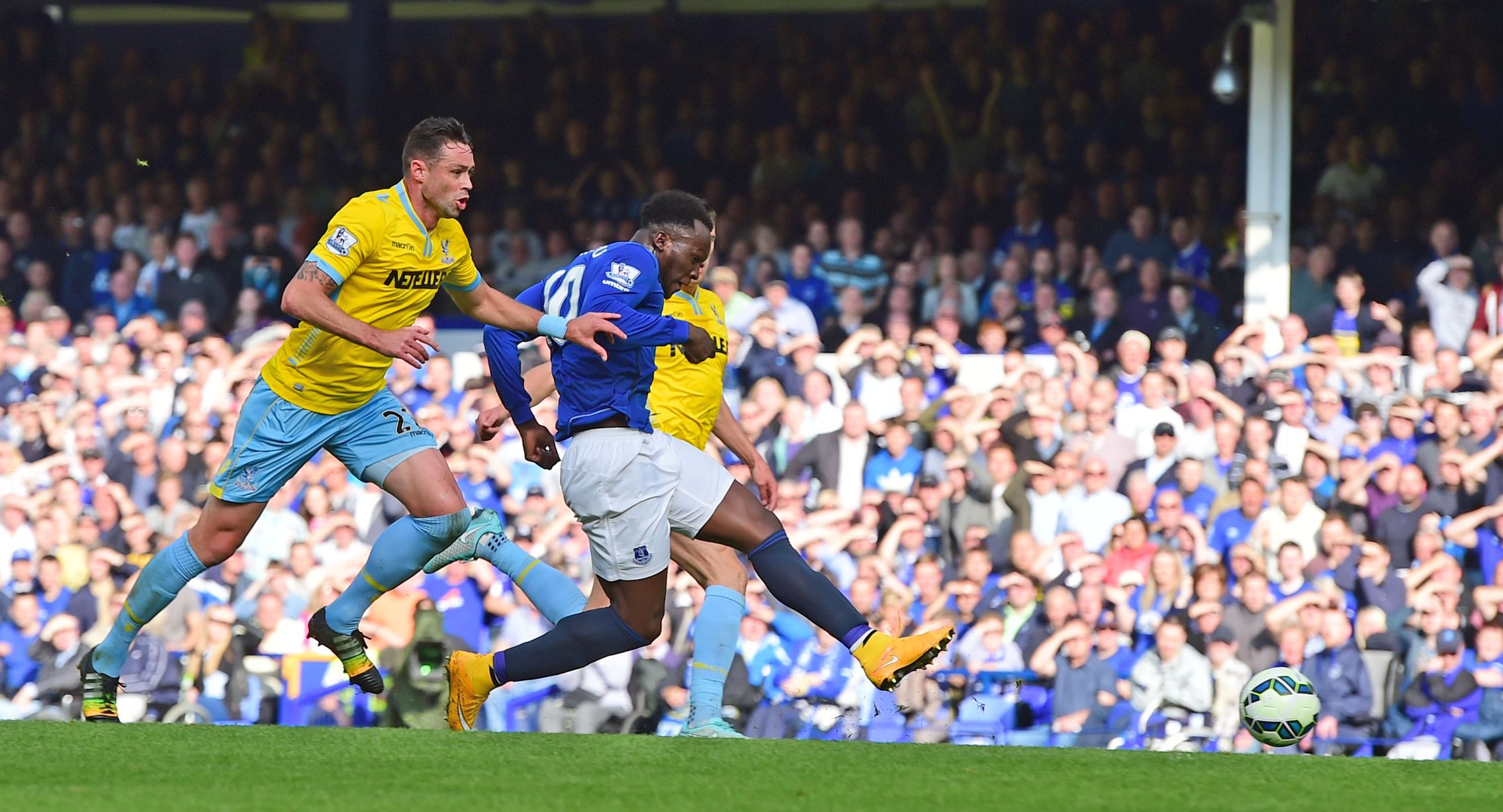 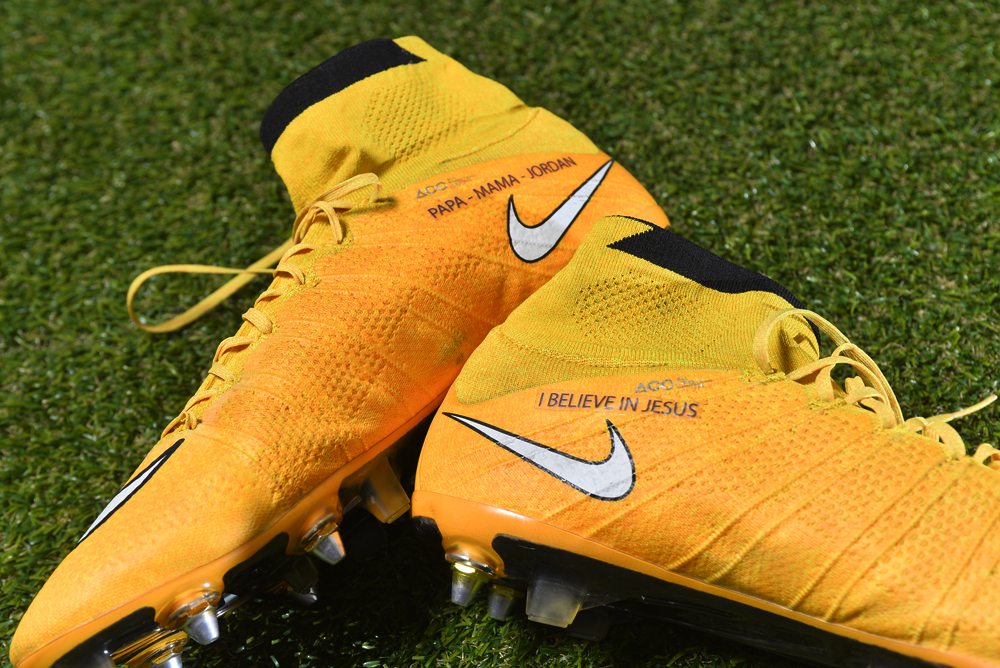 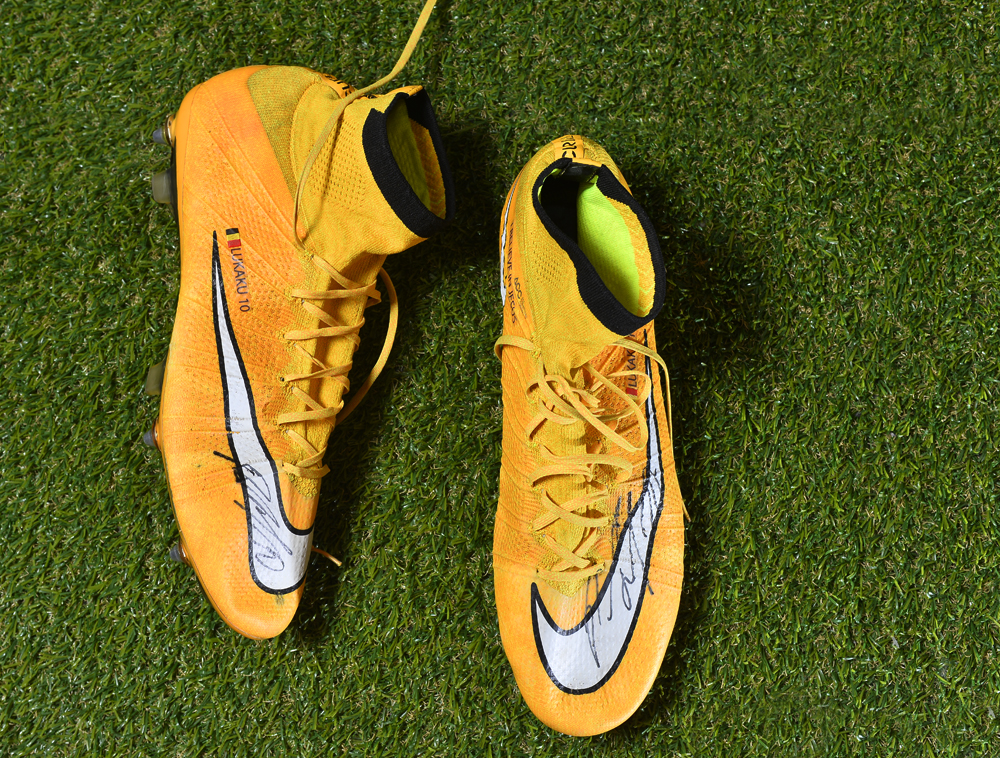 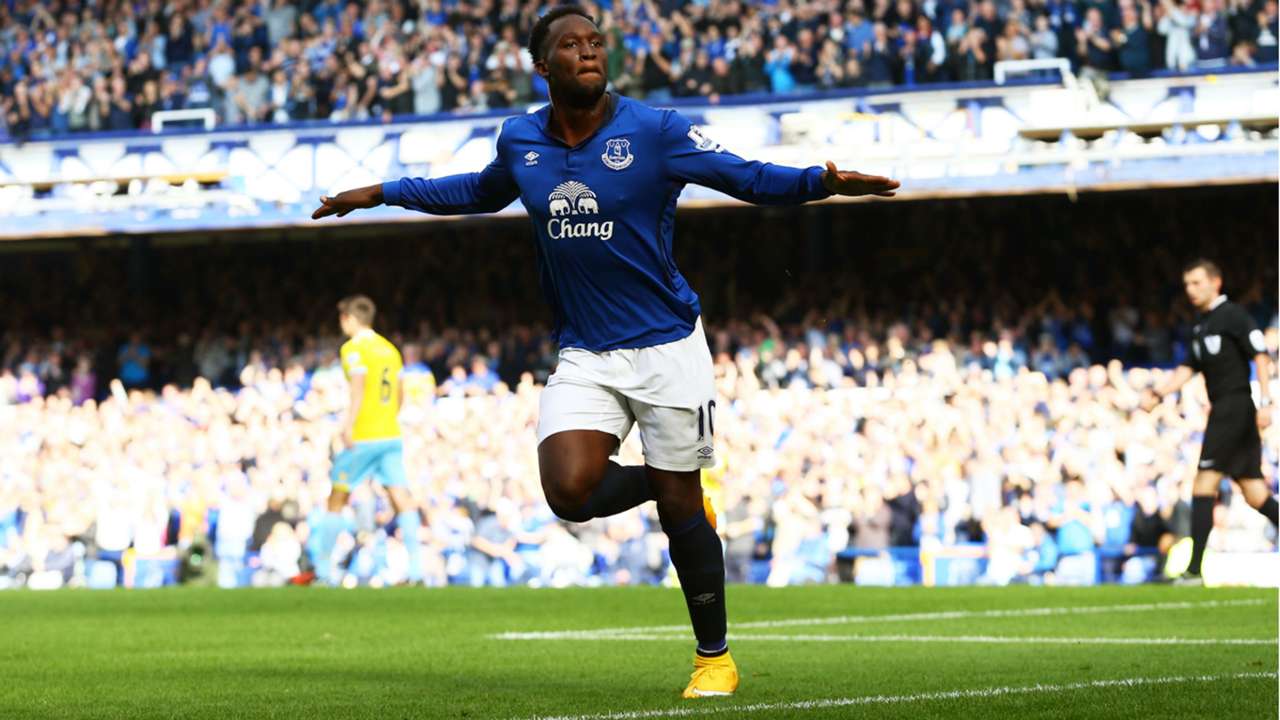 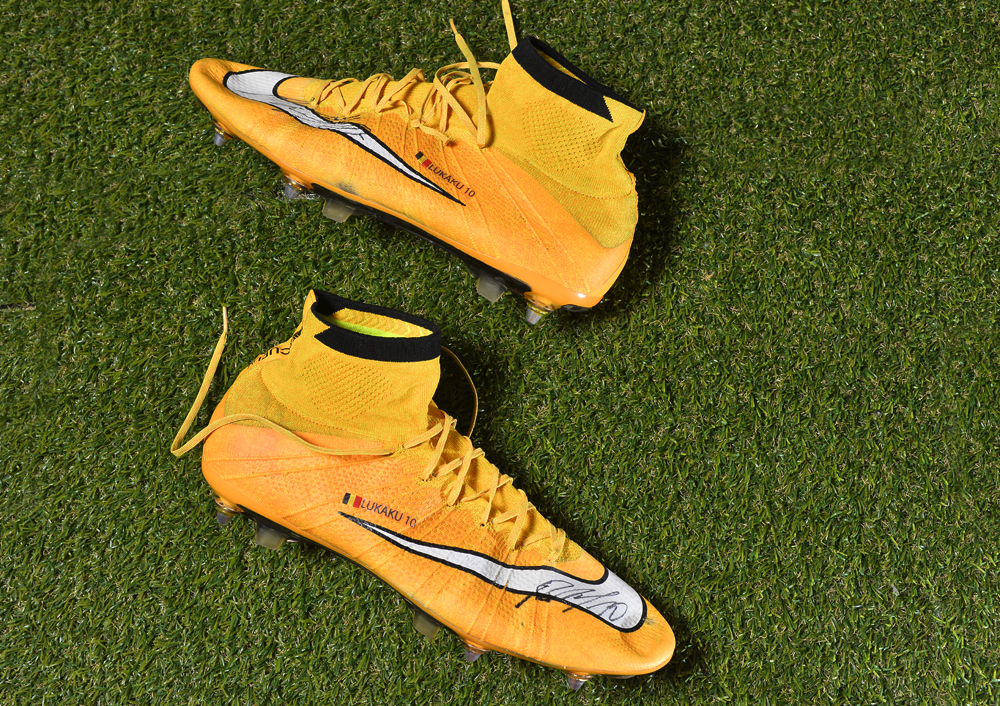 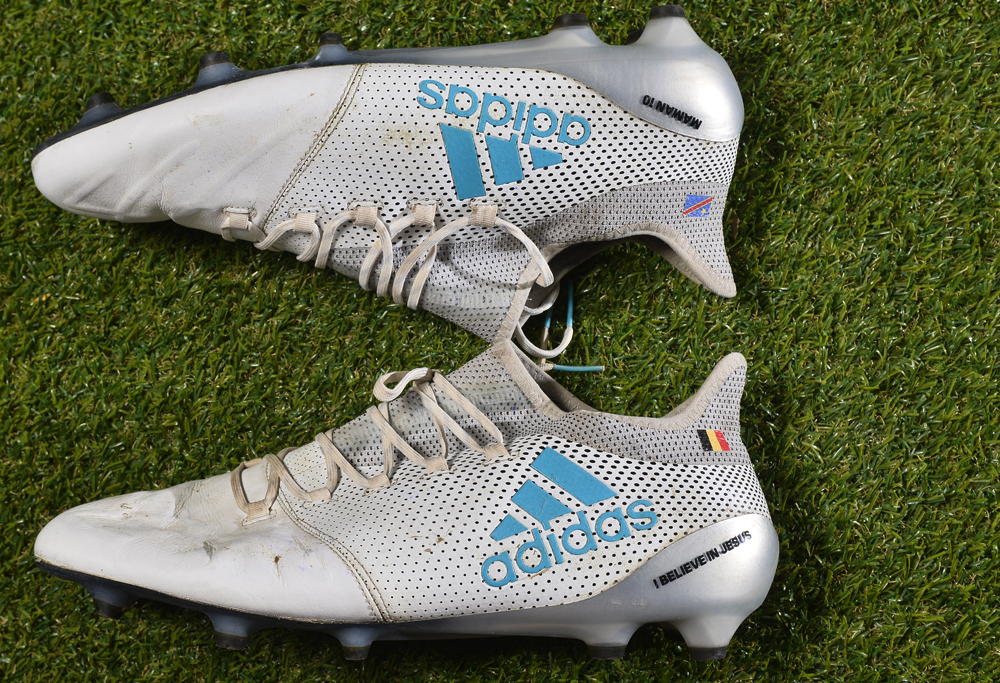 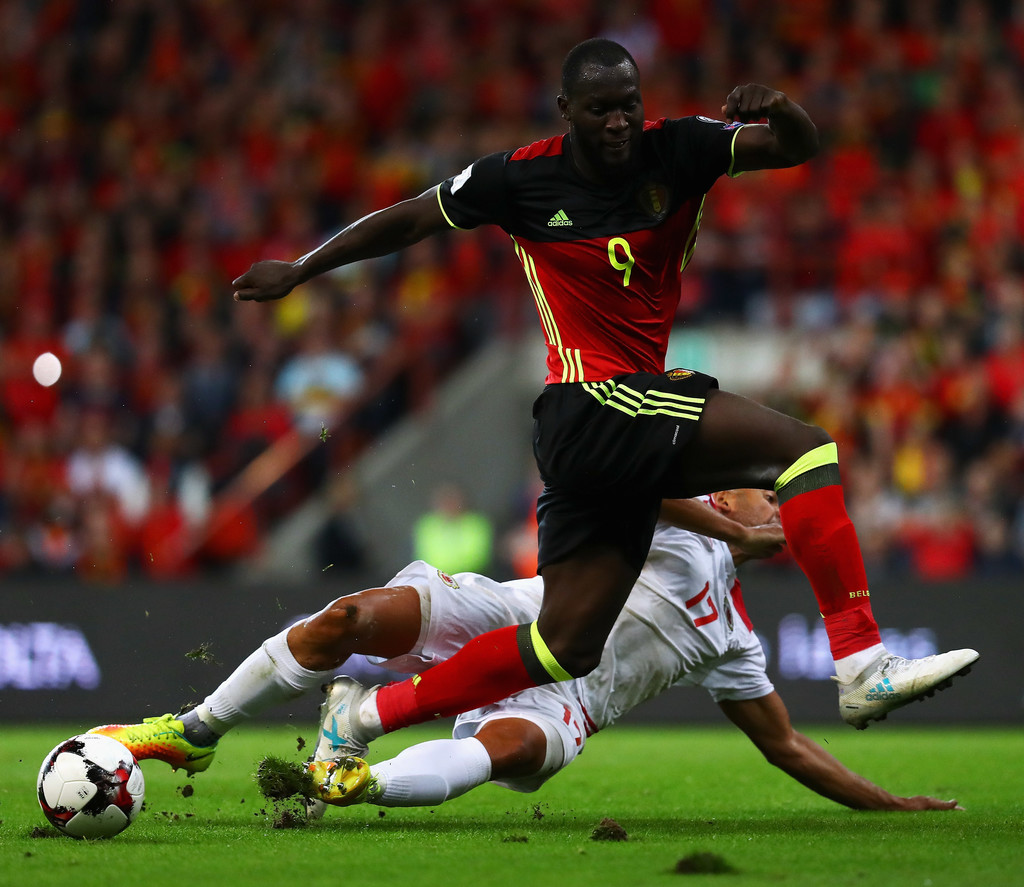 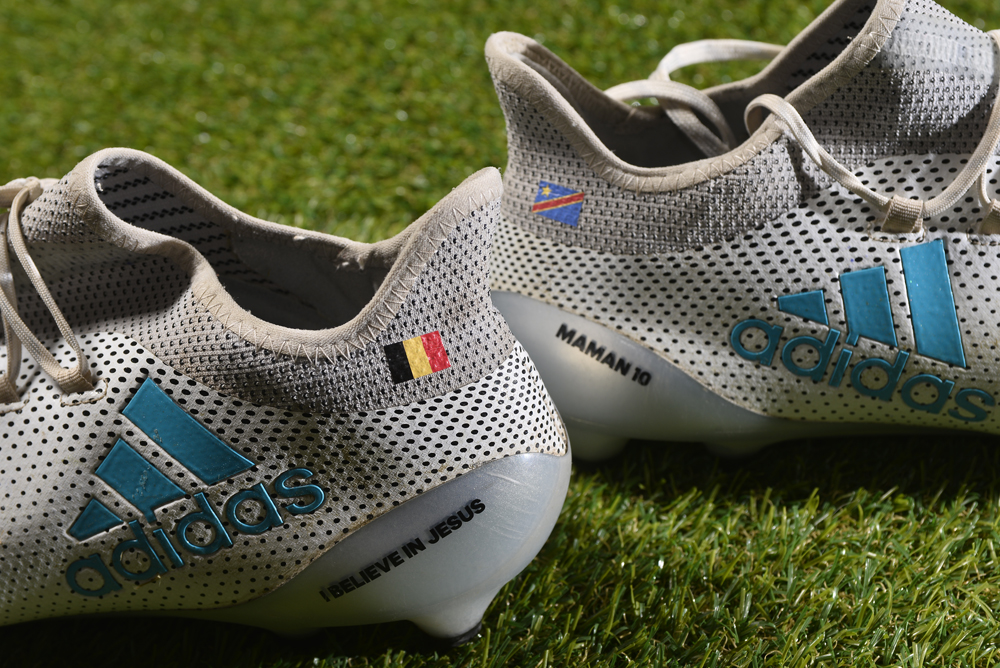 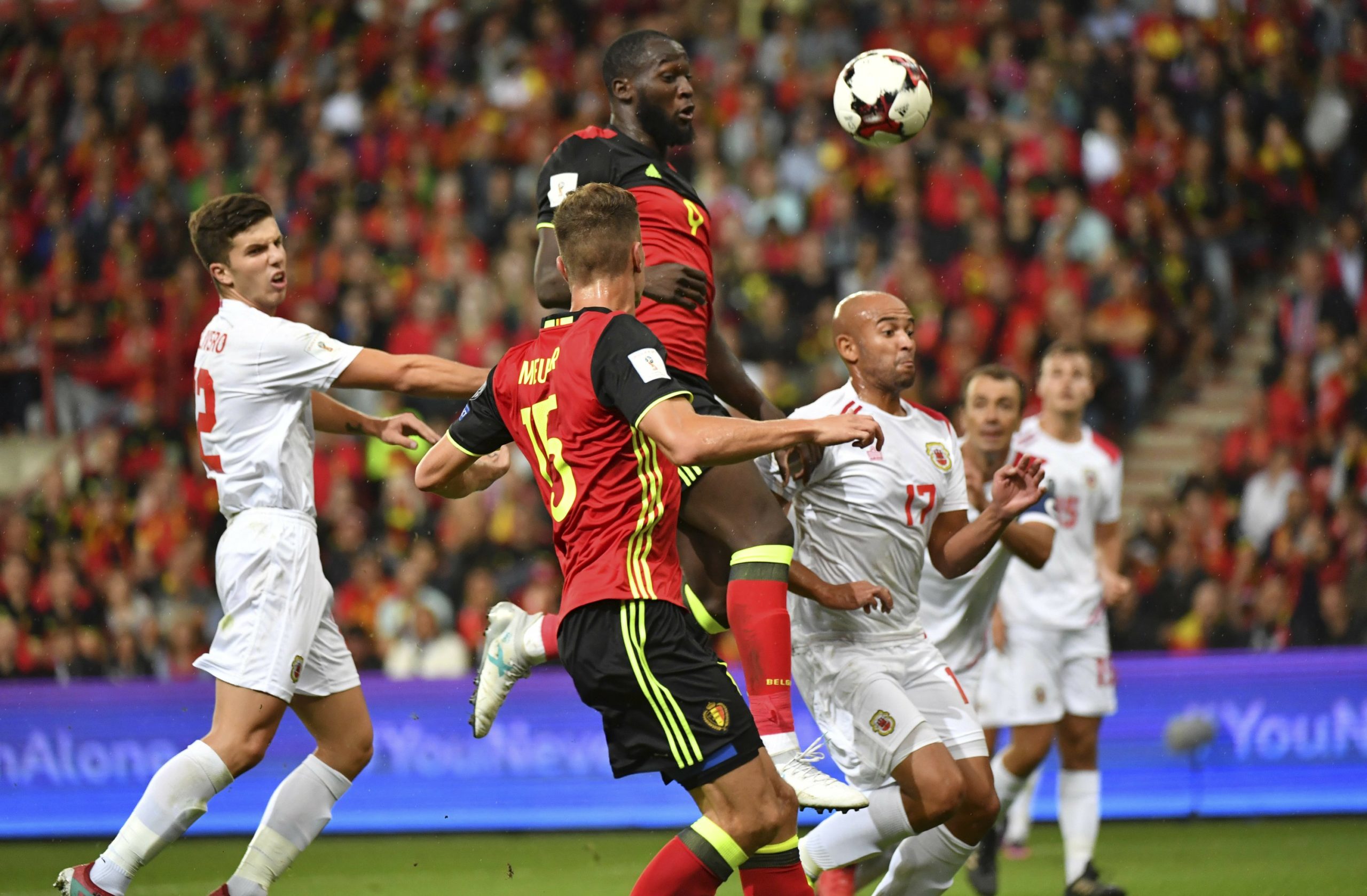 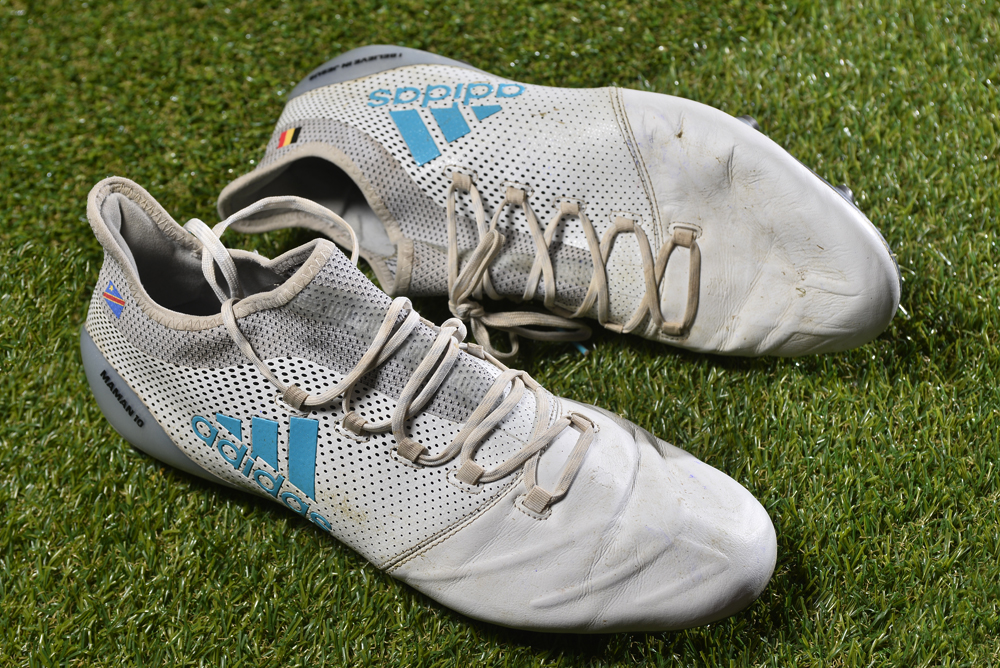 Romelu Lukaku wears a definitely uncommon UK13 size of boots, which is likely an NBA player’s size. This is obviously an hilarious topic with his mates. Juan Mata for example gave Romelu Lukaku his warm welcome to Manchester United posting on Twitter “Welcome Romelu Lukaku aka “biggest boots ever” related to a picture of him wearing Lukaku’s boots in his feet and another picture with his boots beside of Ronelu’s boots. To give an idea of how big they are, we tried to do something similar shooting Lukaku’s boots beside of Sebastian Giovinco’s boots. The hilarious result…is below. 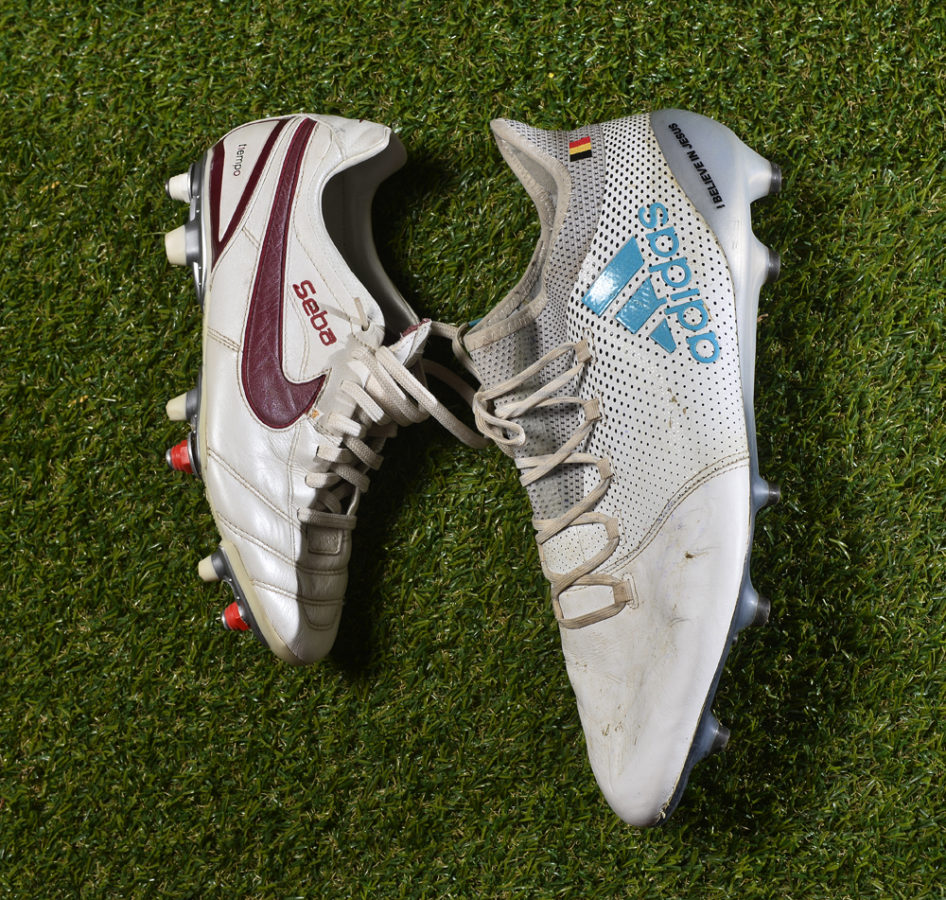 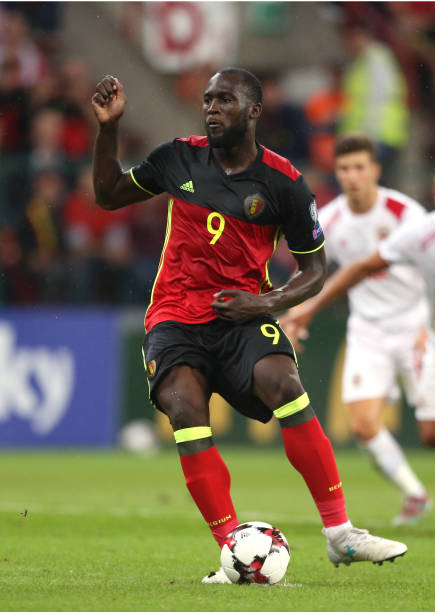 Lukaku is a left-footed player, who in 2014 was named by The Guardian as one of the ten most promising young players in Europe. Lukaku has also been known to use his physicality to get around defenders. Lukaku was born in Antwerp, Belgium to Congolese parents. His father, Roger Lukaku, played professional football and was capped at international level by Zaire. He has a younger brother named Jordan, who has progressed through the youth academy at Anderlecht and currently plays for Lazio in Italy. His cousin Boli Bolingoli-Mbombo plays as a left-sided winger or defender for Austria’s Rapid Vienna. Lukaku was the subject of a television documentary series called De School Van Lukaku (Lukaku’s School) shown on the Dutch-speaking Eén network. The reality show followed the teenage Lukaku and his classmates during the course of a year at the Saint-Guidon Institute, a school in Brussels, where the footballer was based while with the Anderlecht youth team. In 2009, the series followed the school as it made a field trip to London, visiting Chelsea’s Stamford Bridge ground. Lukaku said at the time, “What a stadium. If one day in my life I will cry, it will be the day I play here. I love Chelsea.” In addition to his native French and Dutch, Lukaku can speak fluent English, Portuguese, Spanish and a Congolese Swahili dialect, and can also understand German. Lukaku has stated his childhood hero and biggest idol was Didier Drogba. Lukaku is a practising Roman Catholic; he made the pilgrimage to Lourdes in 2014. He does not drink alcohol. Lukaku was a member of the Belgium under-21 team and scored a goal on his debut against Slovenia. On 24 February 2010, Lukaku was named for the first time in the Belgium senior squad for a friendly match against Croatia. On 17 November 2010, he scored his first two international goals in a friendly against Russia. Lukaku scored his first goal in almost two years for the national team, netting the winner in a 4–2 friendly victory over rivals the Netherlands on 15 August 2012. On 10 November 2017, Lukaku equalled the all-time Belgium goalscoring record set by Bernard Voorhoof and Paul van Himst after scoring twice against Mexico in a 3–3 draw. Four days after he equalled the record, Lukaku became the Belgium’s all-time record goalscorer with 31 international goals at the age of 24 after he scored the only goal in a 1–0 win over Japan. Although this record was counted by the Royal Belgian Football Association, FIFA only officially recognised 28 goals after a nullified international friendly match against Luxembourg on 26 May 2014 which he netted a hat trick in a 5–1 win because the former Belgium coach, Marc Wilmots made seven substitutions during the match instead of the permitted six which are not in accordance to the Laws of the Game. On 6 June 2018, Lukaku officially became the Belgium’s all-time leading scorer with 31 goals after scoring a goal in a 3–0 win over Egypt. He also broke a three-way tie with the previous record goalscorers, Bernard Voorhoof and Paul Van Himst. On 18 June 2018, Lukaku scored twice in a 3–0 win over Panama in their opening group game at the 2018 FIFA World Cup. In the next group game on 23 June 2018, he scored twice again in a 5–2 win over Tunisia. In doing so, Lukaku became the first player since Diego Maradona in 1986 to score two goals or more in consecutive World Cup matches. He eventually ended the tournament with four goals and one assist, which earned him the Bronze Boot award, as Belgium finished the tournament in third place. 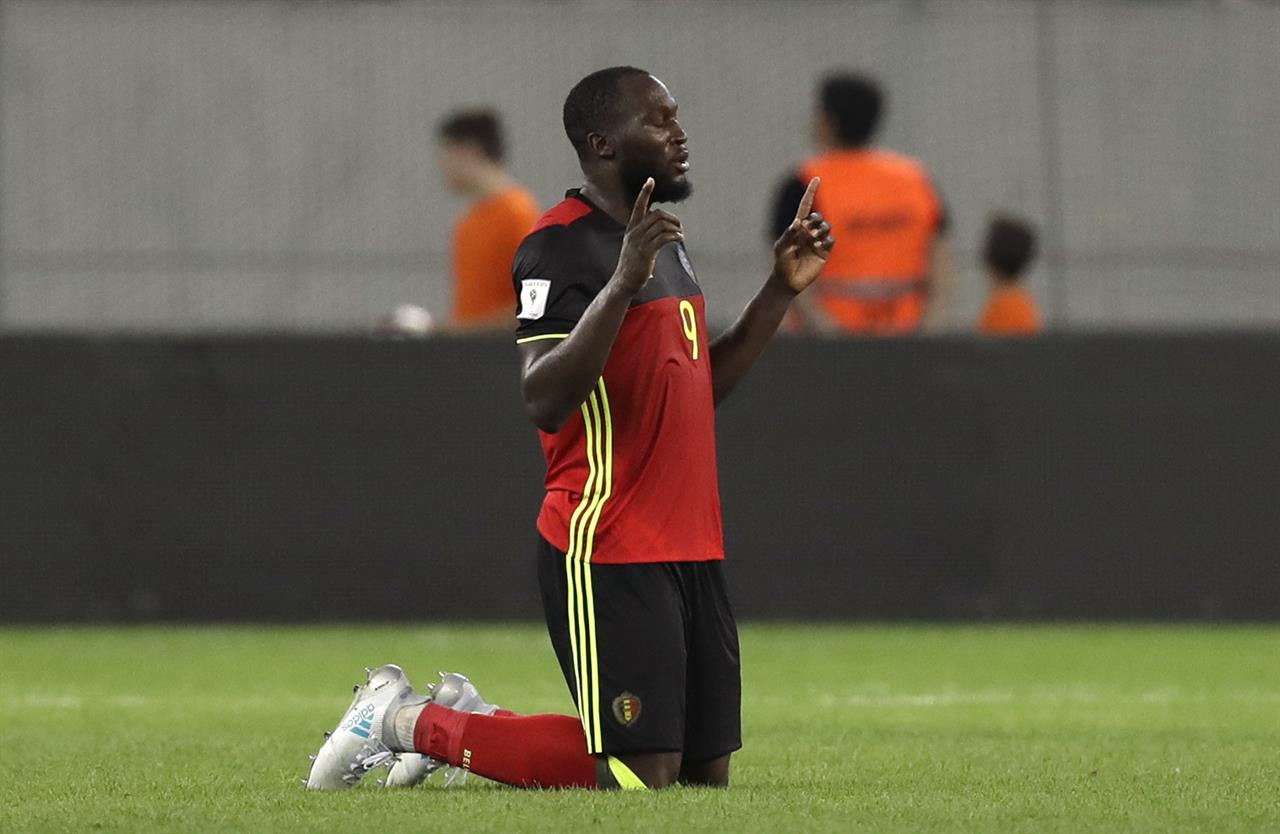 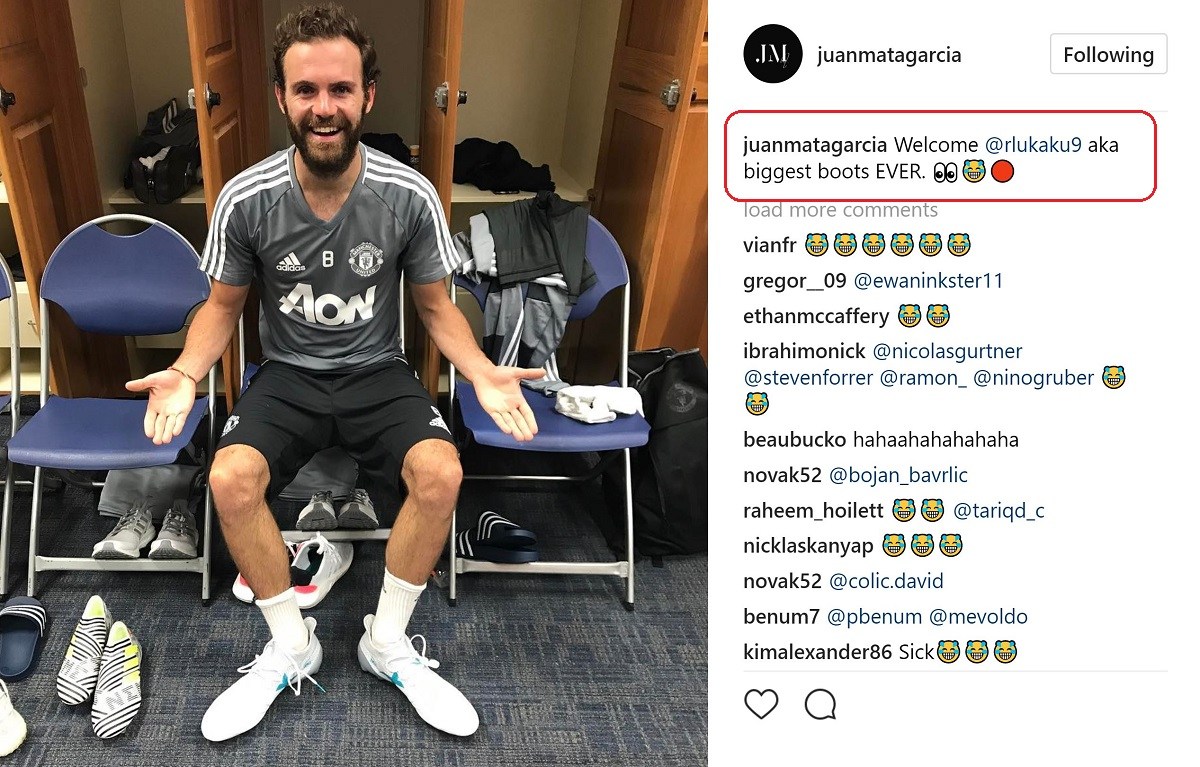 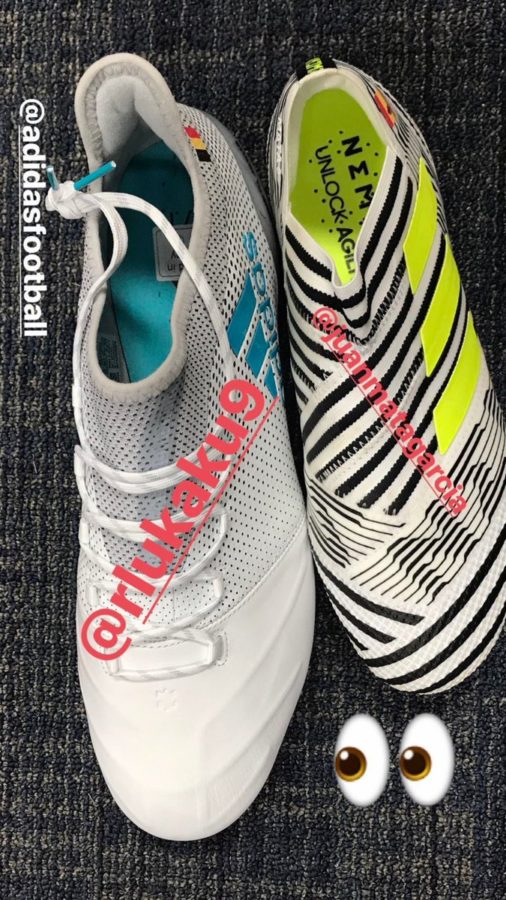 Grosso Grosso2021-04-28T09:52:40+00:00
Page load link
This site uses cookie technology, including third parties' ones. If you want to know more click here. If you access any element of this site outside this banner, you consent to the use of cookies. Ok
Go to Top