Gianluca Pagliuca is an Italian former professional goalkeeper. He is regarded by pundits as one of the greatest goalkeepers of his generation, and one of Italy’s best keepers ever. Throughout his career, he played for Sampdoria, Inter, Bologna, and Ascoli in Italy, winning several domestic and international trophies. At international level, he represented Italy at three FIFA World Cups (1990, 1994, and 1998), most notably reaching the 1994 World Cup final as Italy’s starting goalkeeper. In 2017 he is still the fifth highest capped player (592 caps), and the best penalty-stopper (24 saves) in Serie A, although other specialists such as Júlio César and Samir Handanović have a higher success rate.

Pagliuca was born in Bologna. In his club career, he played for Sampdoria (1987–94), Internazionale (1994–99), Bologna (1999–2006), and Ascoli (2006–07). His most notable successes with Sampdoria include one Cup Winners’ Cup and one Scudetto; he also reached a UEFA Champions League final, losing 1–0 to Barcelona in 1992, at Wembley, in spite of his impressive performance. In 1994, he moved from Sampdoria to Internazionale from a then world record fee for a goalkeeper of £7 million.

U.C. Sampdoria won their first ever Serie A title, thanks to a remarkable season for a team playing on its absolute peak. Gianluca Vialli was the league top scorer on 19 goals, and Roberto Mancini, Attilio Lombardo, goalkeeper Gianluca Pagliuca plus centre half Pietro Vierchowod were also instrumental in Sampdoria’s success story.

During his  whole career, but especially with Sampdoria, Pagliuca was very recognizable for his colorful fancy shirts. He was sponsor by Reusch first and then by Puma. During his period with Sampdoria his sponsor Reusch provided him shirts and gloves but since the team’s supplier was Asics, he had to hide the Reusch’s logo showing Asics’s logo on chest like it happened with this shirt.

After taking part in the 1990 World Cup without playing a minute, Pagliuca overtook Walter Zenga, Stefano Tacconi and Luca Marchegiani, becoming first choice goalkeeper for Italy at the 1994 World Cup under Arrigo Sacchi. He received the dubious honour of being the first goalkeeper to be sent off in a World Cup match, when he was dismissed for handling outside his area against Norway. However, he returned after suspension to feature from the quarter-finals onwards with his team losing to Brazil in a penalty shootout. Despite the loss, Pagliuca became the first ever goalkeeper to save a penalty from a shootout in a World Cup final, denying Marcio Santos his shot. In 1995, Pagliuca’s international career was halted by the emergence of Juventus goalkeeper Angelo Peruzzi, his perceived career rival, and it would be 2 years before he returned to the Italy senior squad, although he took part at the Olympics with the under-21 side as an overage player in 1996. Under Cesare Maldini, Pagliuca would have taken part to the 1998 World Cup only as a back-up, but he earned the starting spot because of a last-minute injury to Peruzzi. He made one of the saves of the tournament, again against Norway, when he shot out a hand to prevent Tore André Flo’s point-blank header from netting. However, Italy lost against host country France in the quarter-final after the penalty shootout, even though Pagliuca blocked Bixente Lizarazu’s shot. After the tournament, the emergence of fellow keepers Francesco Toldo and Gianluigi Buffon (who were, themselves, Pagliuca’s deputies in the 1998 World Cup), along with Peruzzi’s recovery from his injury, put an end to Pagliuca’s international career on 39 caps.

In the second World Cup 1994 match against NorwayGianluca Pagliuca was sent off for handling the ball outside the area. Luca Marchegiani was brought in to replace him. Arrigo Sacchi decided to take off Baggio in what produced an outcry amidst the fans. Baggio later stated that Sacchi was “crazy”.

In 1994, Pagliuca moved from Sampdoria to Internazionale from a then world record fee for a goalkeeper of £7 million. With the nerazzurri he reached two consecutive UEFA Cup finals, losing the first one against Schalke 04 in 1997 and winning the second one in 1998, when he captained the side to a 3–0 win over Lazio. Pagliuca left Inter in 1999, moving to his home town club, Bologna, after the former Juventus boss Marcello Lippi took charge of Inter and signed Angelo Peruzzi from his former club.

This shirt was worn by Gianluca Pagliuca during the game against Guingamp for the Uefa Cup 1996/1997. It was given to the old Guingamp stadium’s custodian who sold it in a charity auction. 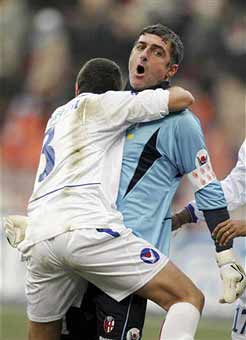 An agile, consistent and athletic goalkeeper, Pagliuca was renowned for his excellent reactions and penalty-stopping abilities, as well as his accurate distribution of the ball. Although he was capable of coming off the line to handle crosses, he performed better between the posts. Nicknamed The Wall, he also distinguished himself by his strong temper. Under coaches Sven-Göran Eriksson and Arrigo Sacchi, who relied on high defensive lines, Pagliuca used to play as a sweeper-keeper.

Grosso Grosso2021-06-08T08:06:33+00:00
Page load link
This site uses cookie technology, including third parties' ones. If you want to know more click here. If you access any element of this site outside this banner, you consent to the use of cookies. Ok
<script type='text/javascript' src