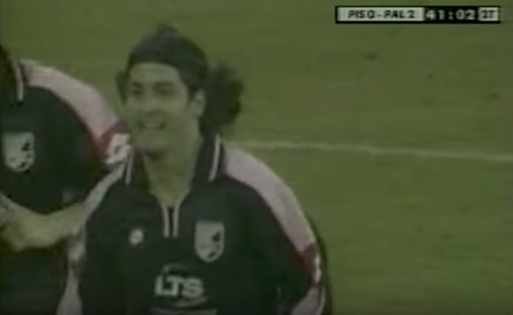 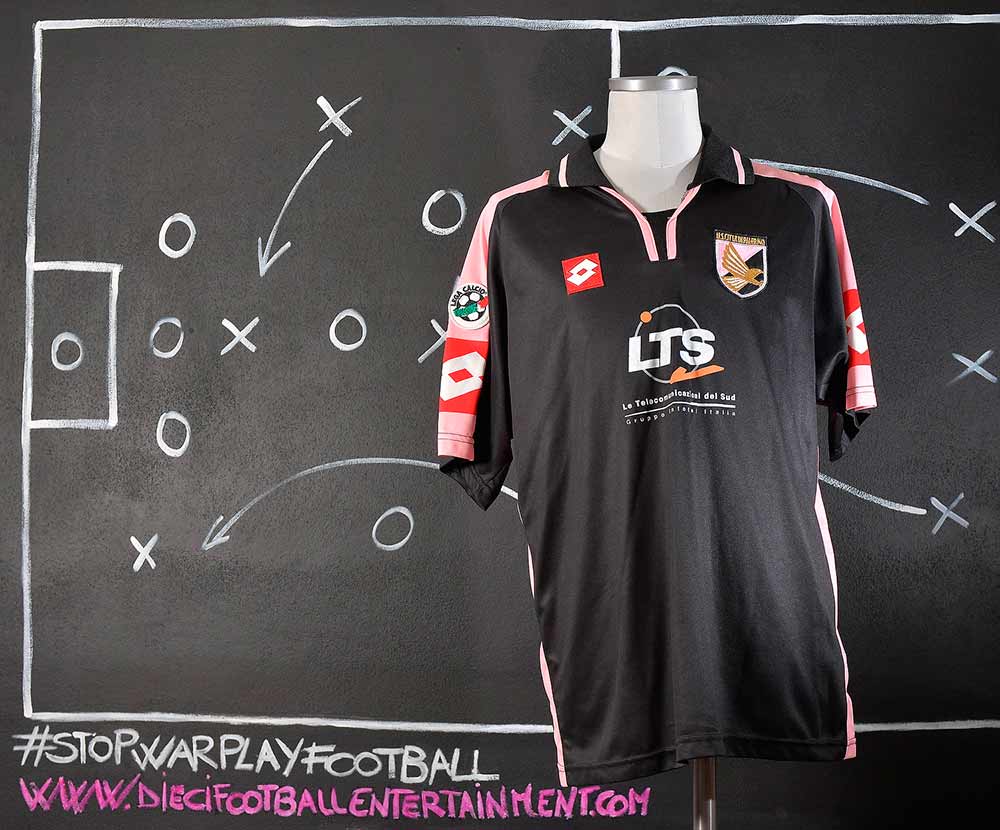 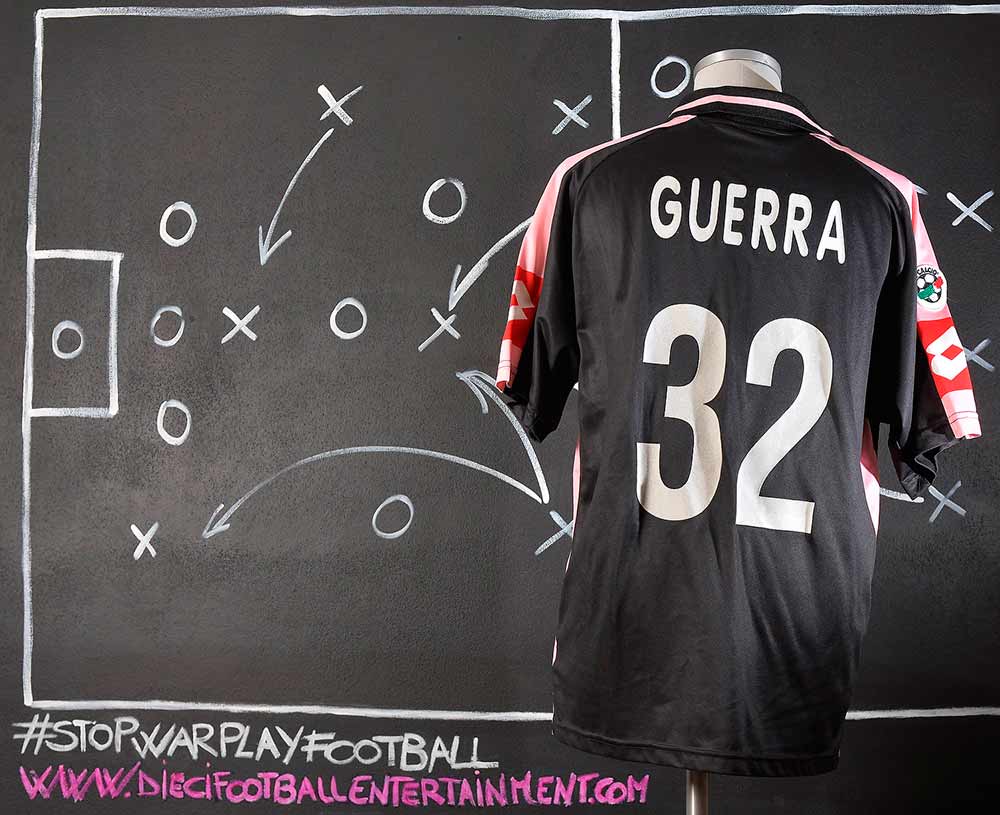 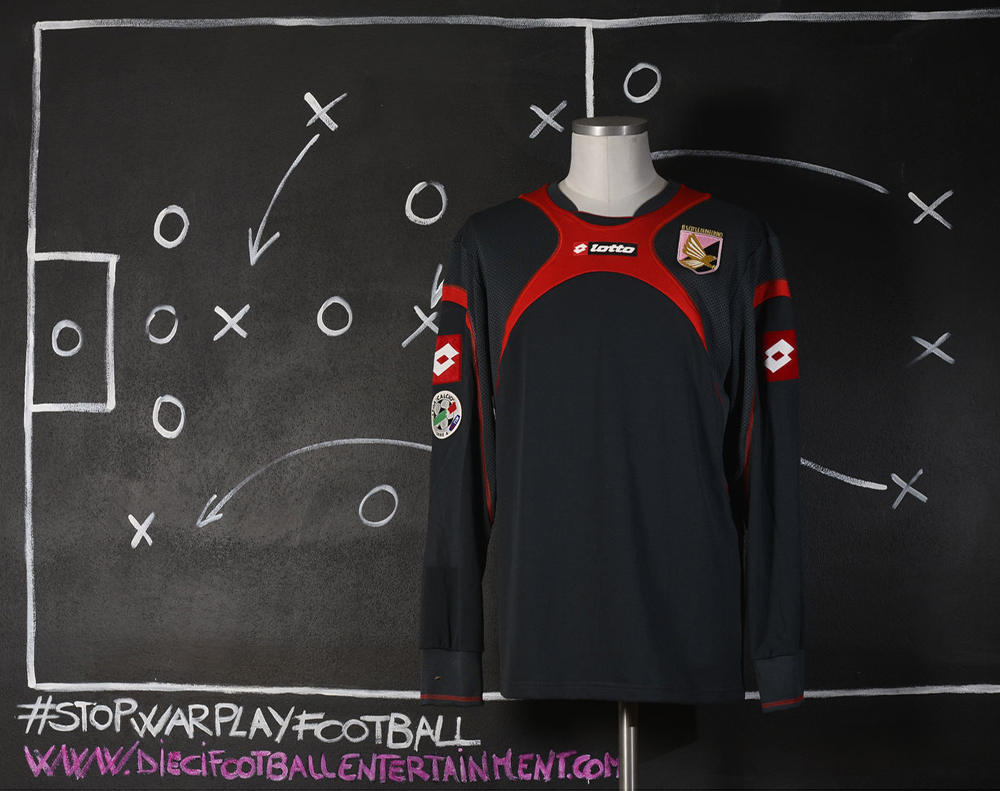 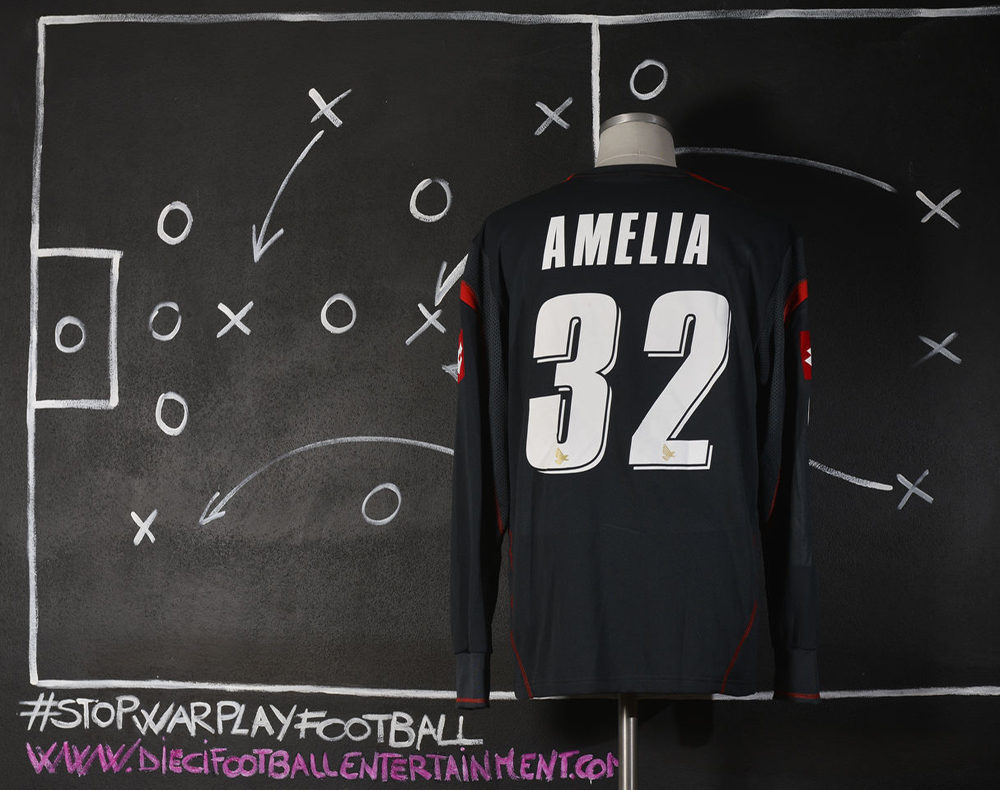 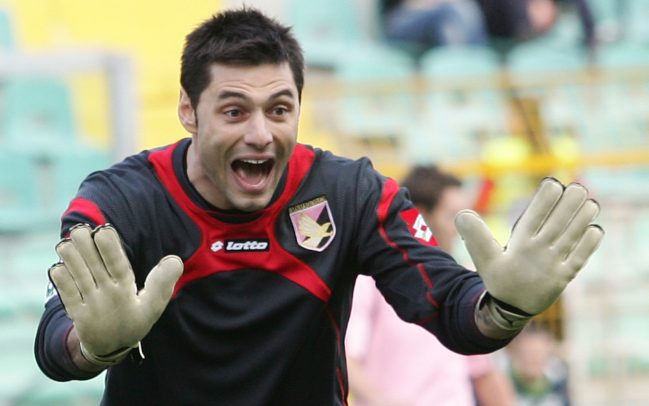 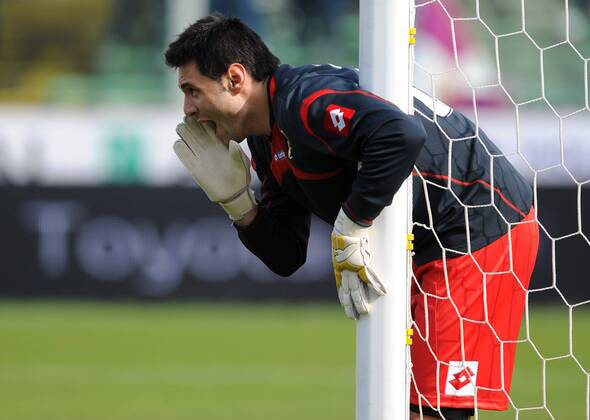 This shirt was worn by Marco Amelia during the Serie A game between Catania and Palermo which took place in Catania, “Angelo Massimino” Stadium, on October 19th 2008. Catania defeated Palermo 2-0 and at the end of the game Amelia swapped his shirt with a Catania’s player whom we got it from. In July 2008, after Livorno were relegated to Serie B, Amelia agreed a permanent deal and contract to join Palermo, for €6 million. Among the highlights of his season, Amelia was mostly remembered by fans for saving Ronaldinho’s penalty in a 3–1 win over Milan, but also, in a more negative fashion, for failing to deal with Giuseppe Mascara’s 49-yard strike in the Derby di Sicilia, which ended in a shocking 0–4 home loss for his side. 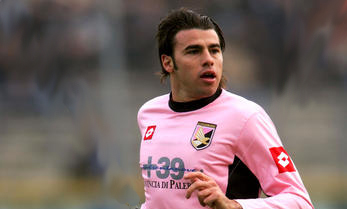 U.S. Città di Palermo played the season 2004-05 in the Serie A league. It was the first time Palermo entered the top division since 1973. Palermo returned to Serie A in 2004 as Serie B champions. Francesco Guidolin was confirmed at the helm of the rosanero and a number of valuable signings were made in the summer market: among them, Andrea Barzagli, Cristian Zaccardo, Simone Barone (all three then part of the Italian squad that won the 2006 FIFA World Cup) and Argentines Mariano González and Ernesto Farías. The team was widely expected to be a candidate for a mid-table place because of the high quality of its roster. All these events provoked a notable excitement among the local fanbase, leading to a sale of over 30,000 season tickets which caused each Stadio Renzo Barbera seat to be assigned to a season ticket holder. Palermo enjoyed a great start and quickly entered into the race for a UEFA Cup spot, ending the first half of the season in fifth place, only three points behind fourth-placed Inter. For a while the team appeared also capable to fight for a place in the next Champions’ League, but failed in do so and Udinese eventually gained the last of the four available spots. Palermo ended in sixth place with 53 points, nine behind Udinese and eight behind fifth-placed Sampdoria. After the final match, Guidolin tended his resignations, and Luigi Delneri was quickly appointed at his place. 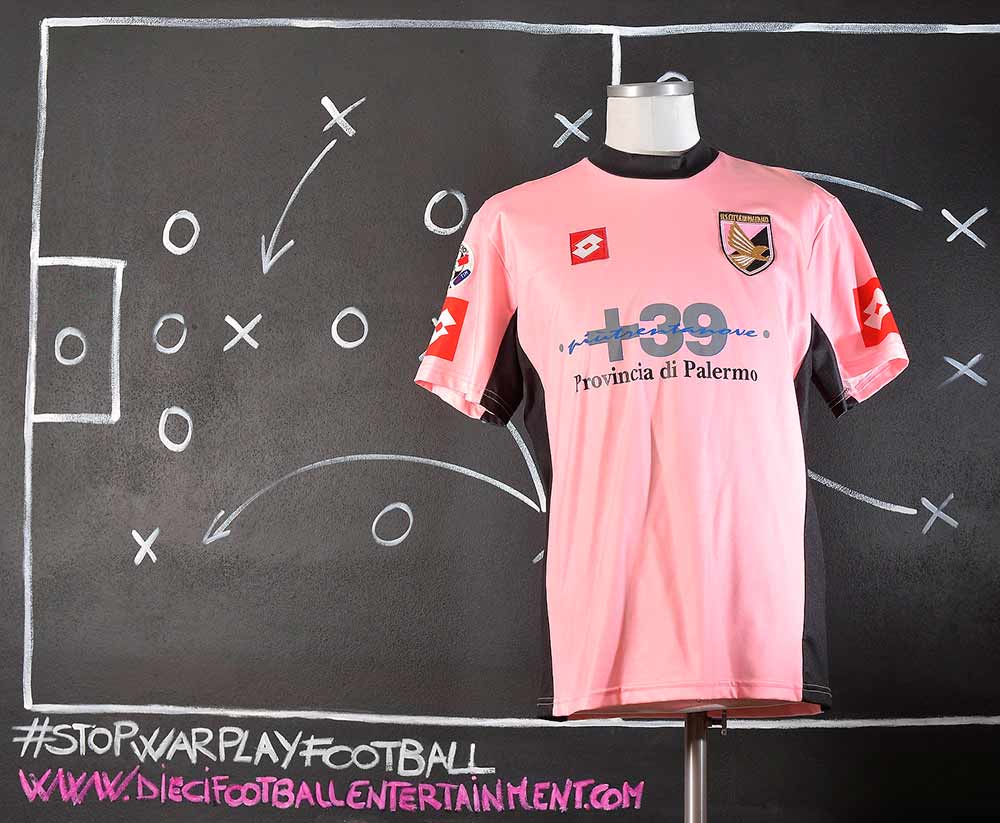 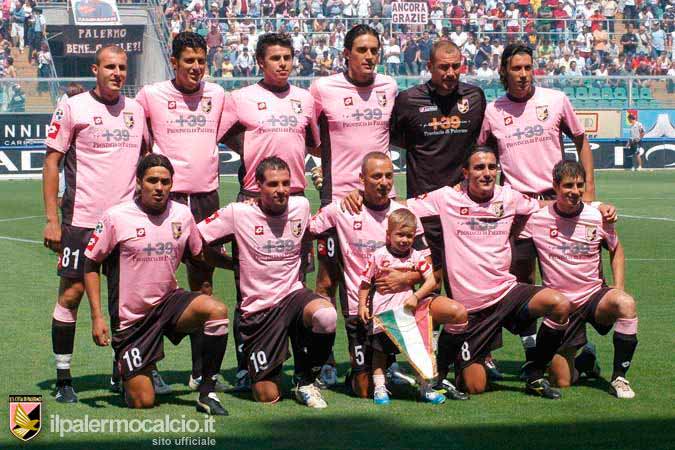 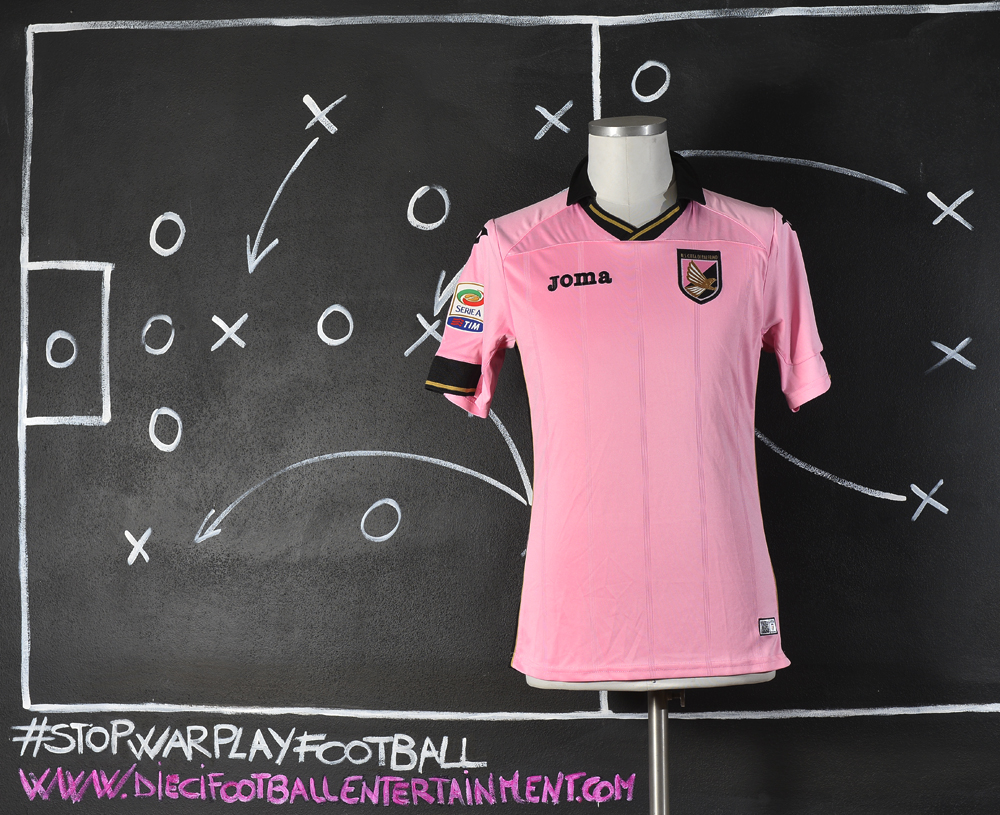 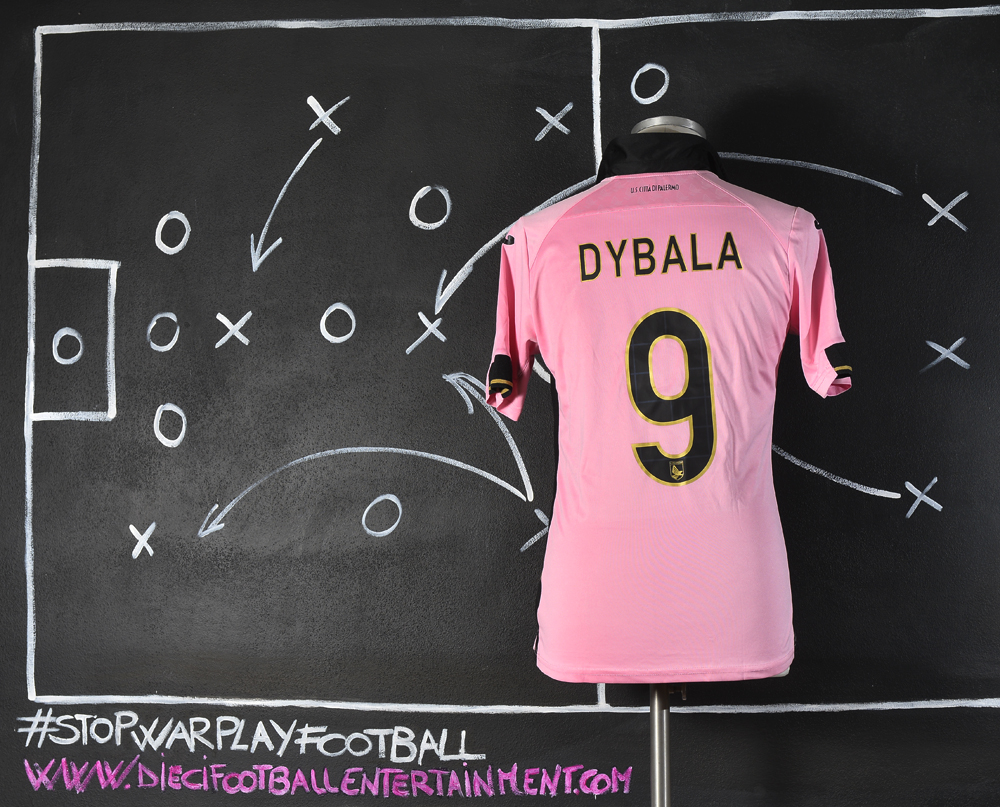 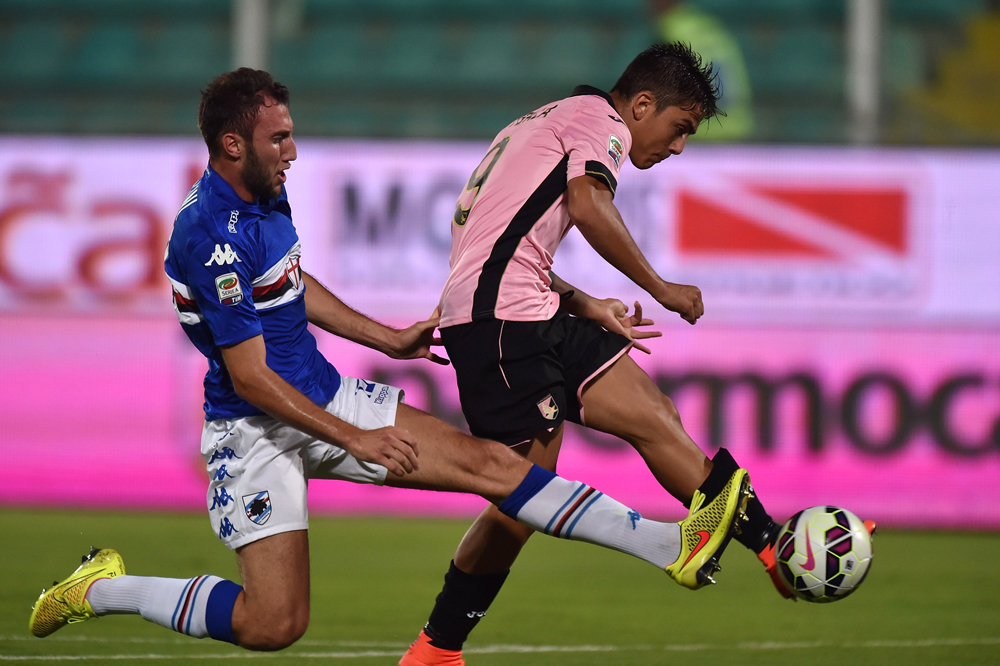 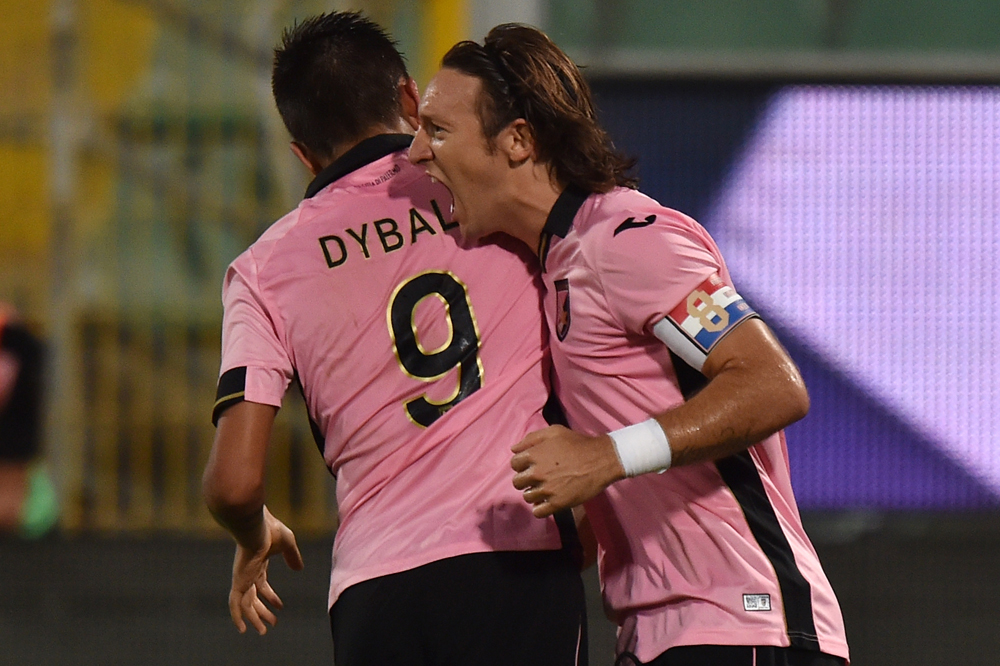 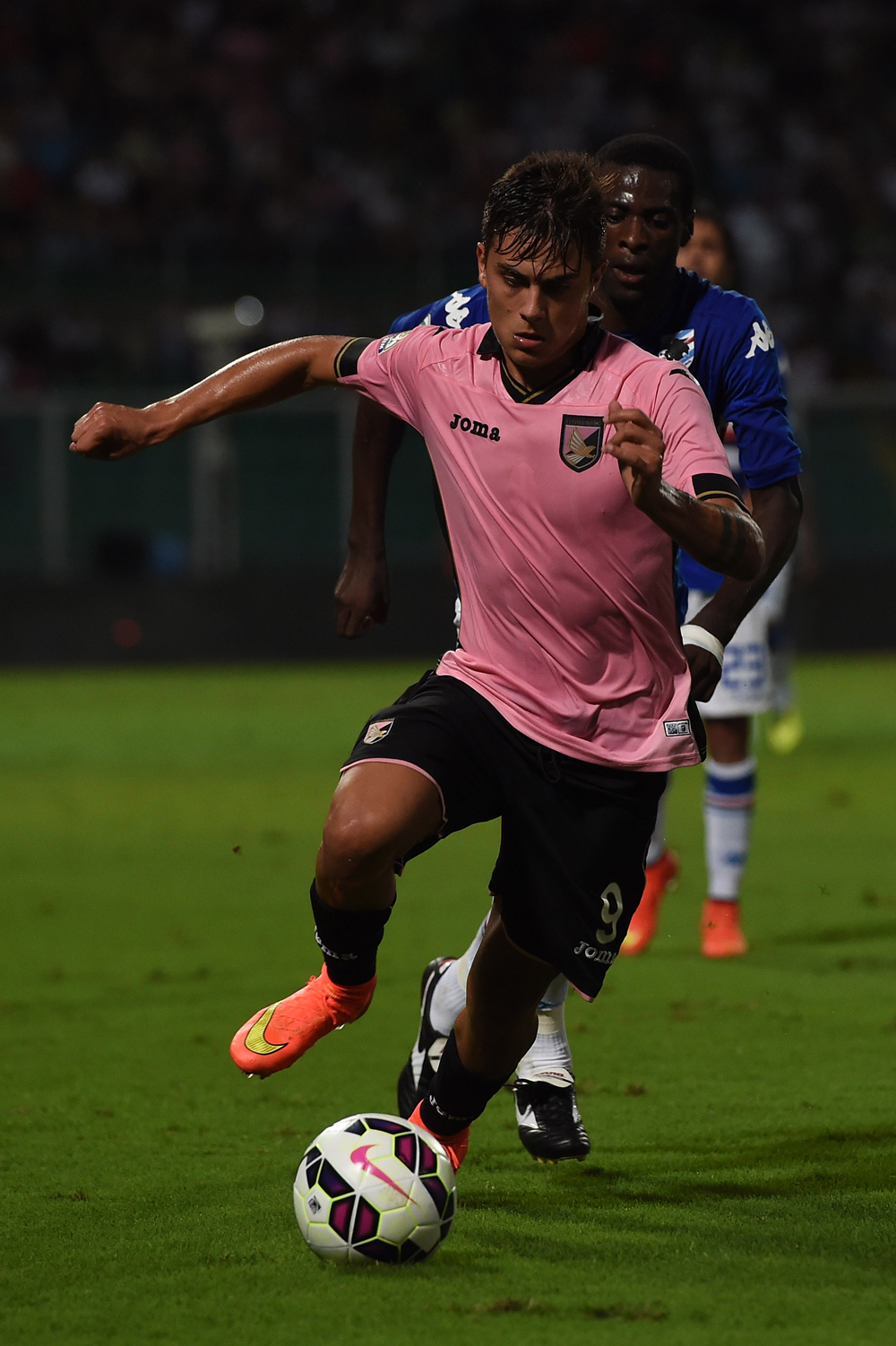 This shirt was worn by Paulo Dybala during the Serie A game between Palermo and Sampdoria which took place in Palermo, “Stadio Renzo Barbera”, on August 31st 2014. Palermo draw 1-1 and Dybala scored the team’s goal. At the end of the game Dybala swapped his shirt with a Sampdoria’s player whom we got it from. On 29 April 2012, U.S. Città di Palermo president Maurizio Zamparini announced the signing of Dybala stating, “We have got Paulo Dybala – the new Sergio Agüero.” Later the same day, however, Instituto’s general secretary José Teaux stated that the man who had completed the negotiations with Palermo did not have the mandate to sell Dybala. Nonetheless, on 20 July 2012 Palermo released a press announcement confirming the signing of Dybala, who signed a four-year deal with the Sicilian club. According to the financial filing of the club, the transfer fee was €8.64 million. Dybala made his debut for the club in a Serie A match against Lazio. He scored his first and second goal in Italy on 11 November 2012 when Palermo defeated Sampdoria at home, 2–0. Dybala had his breakthrough season in the 2014–15 Serie A where he scored ten goals in the first half of the season, forming a successful striking partnership with fellow Argentine–Italian Franco Vázquez and being linked with several top European clubs. He finished the season with 13 goals and 10 assists, which made him one of the top assist providers in the league. 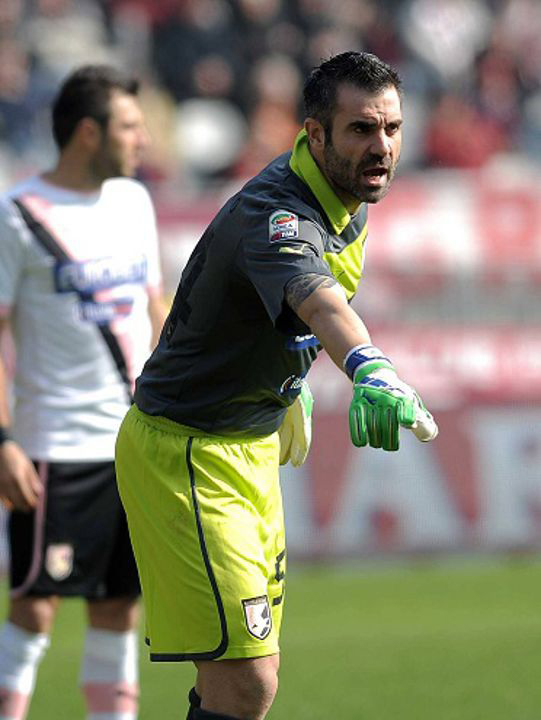 On 25 January 2013, after a long negotiation, Sorrentino signed a 3½-year contract with U.S. Città di Palermo for €4 million. He made his debut two days later, in a 1–1 draw at Cagliari Calcio. Sorrentino is a talented and acrobatic goalkeeper, known for his penalty-stopping abilities, as well as his extraordinary shot-stopping, reflexes, and ability to produce spectacular and decisive saves. An experienced and consistent keeper, he has also drawn praise for his work-rate, determination, leadership, and longevity. He has noted that his position on the pitch tends to change depending on whether he is playing behind a three or four-man back-line; in the former case, he usually plays in a deeper position, closer to the goal. Antonio Di Natale described him as one of the best Italian goalkeepers of his generation. On 1 July 2016, at the age of 37, Sorrentino left Palermo and signed a two-year contract with former club Chievo for an undisclosed fee. During his second spell at the Stadio Marc’Antonio Bentegodi, he continued to be first-choice. 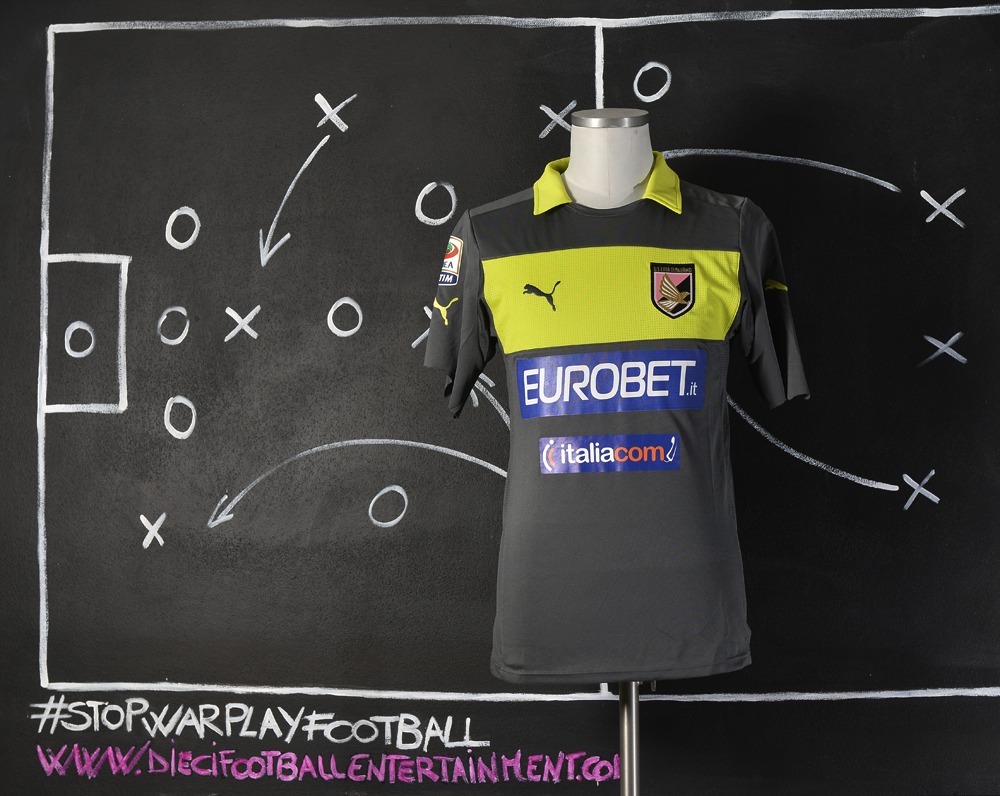 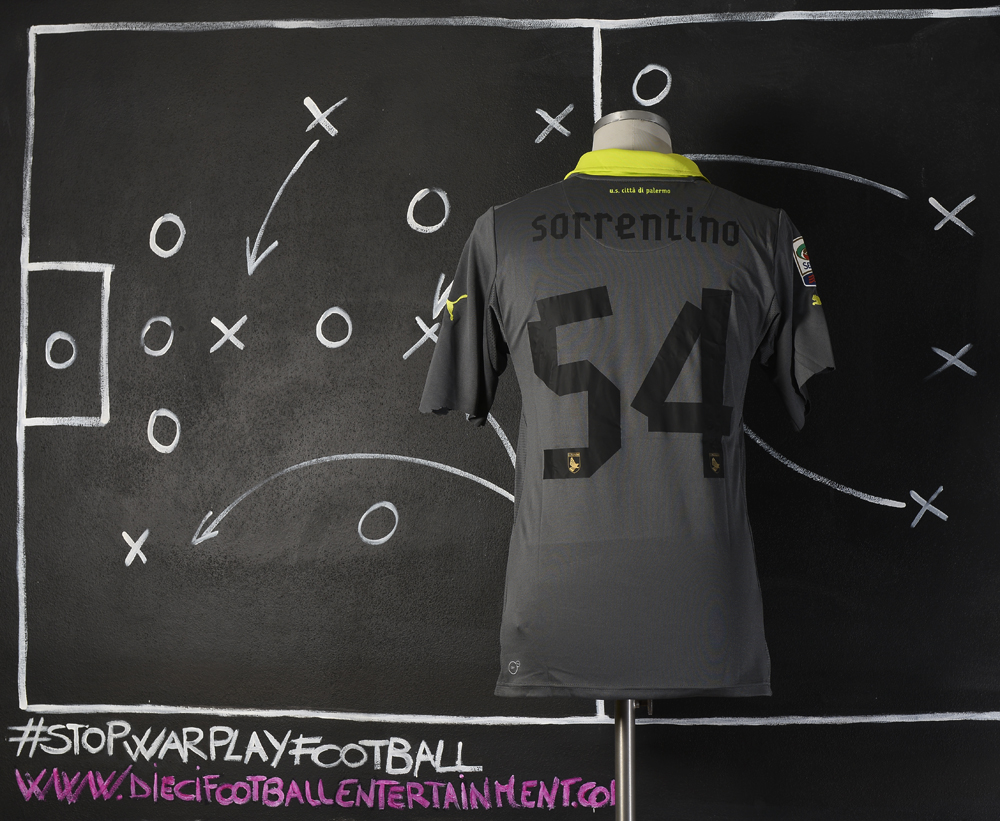 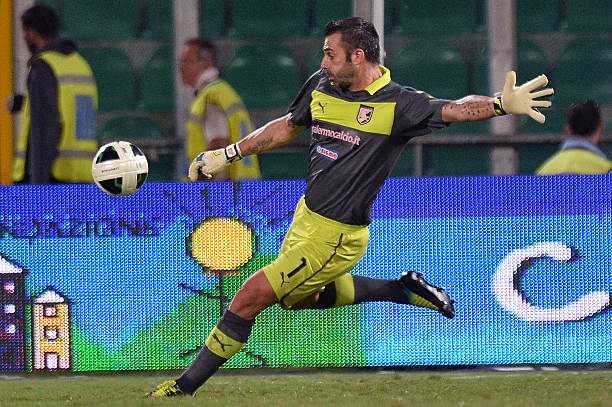 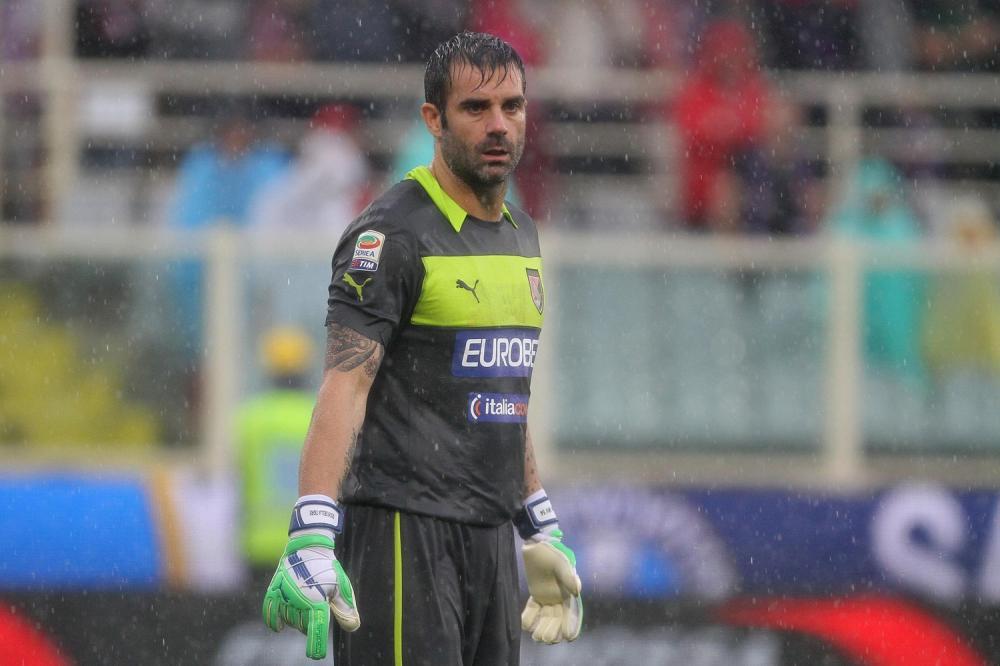 Grosso Grosso2023-01-07T17:00:20+00:00
Page load link
This site uses cookie technology, including third parties' ones. If you want to know more click here. If you access any element of this site outside this banner, you consent to the use of cookies. Ok
Go to Top