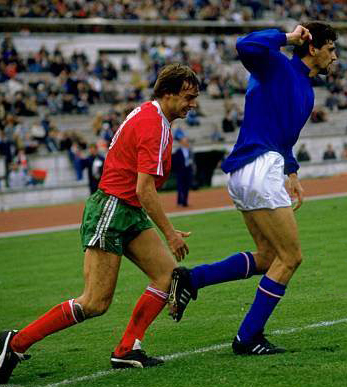 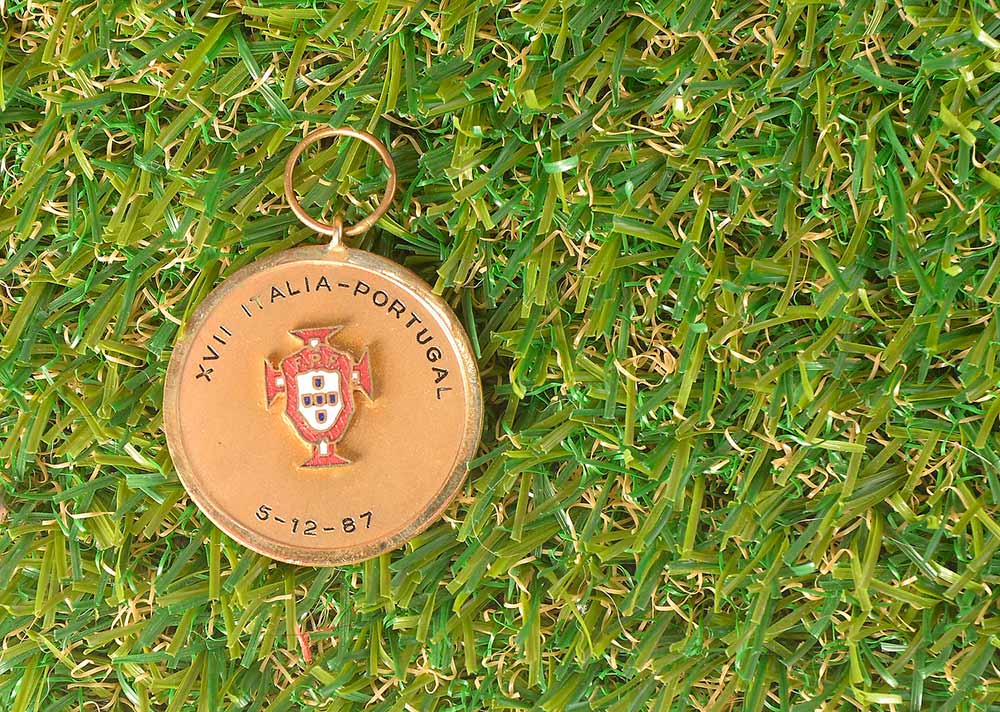 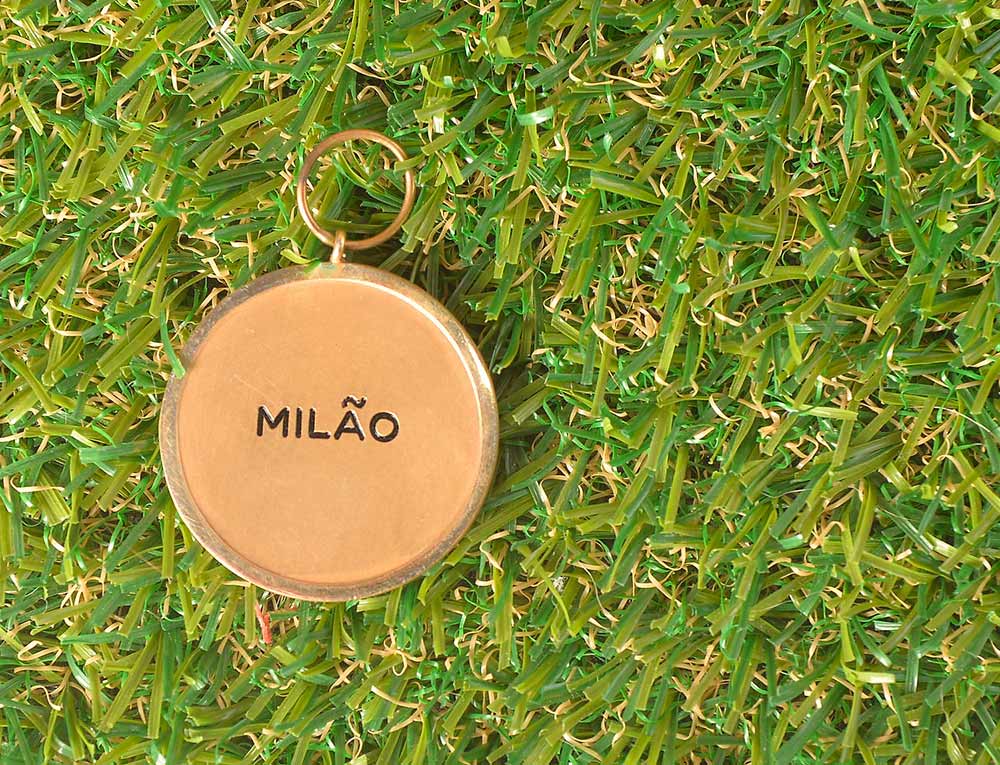 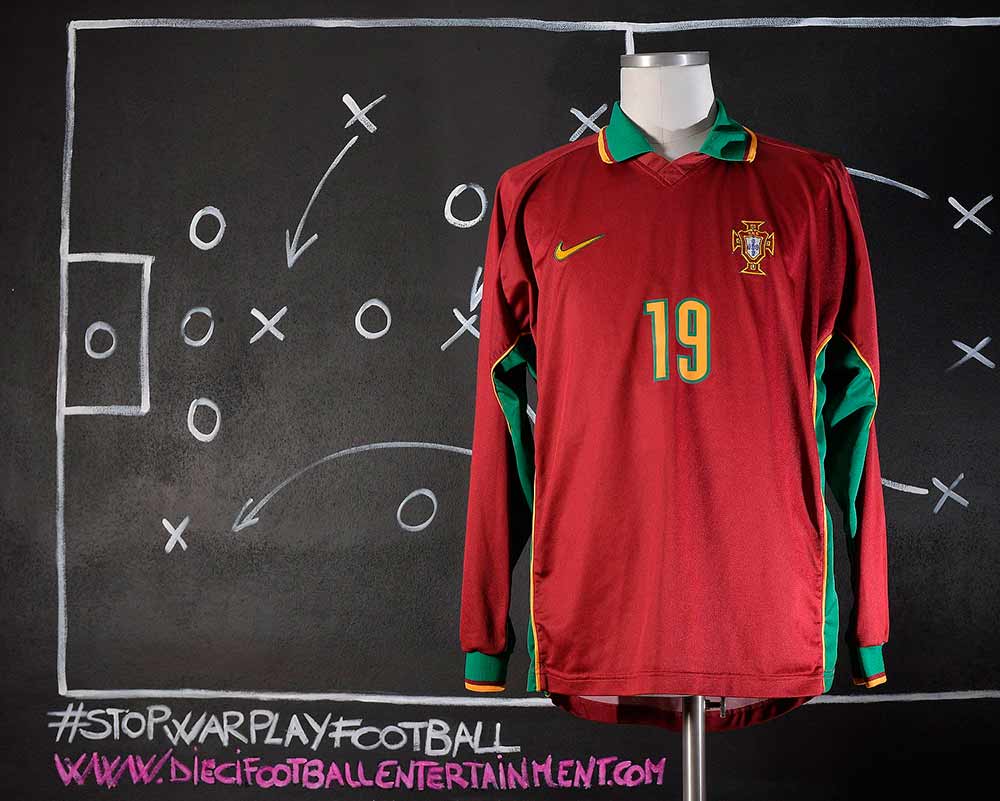 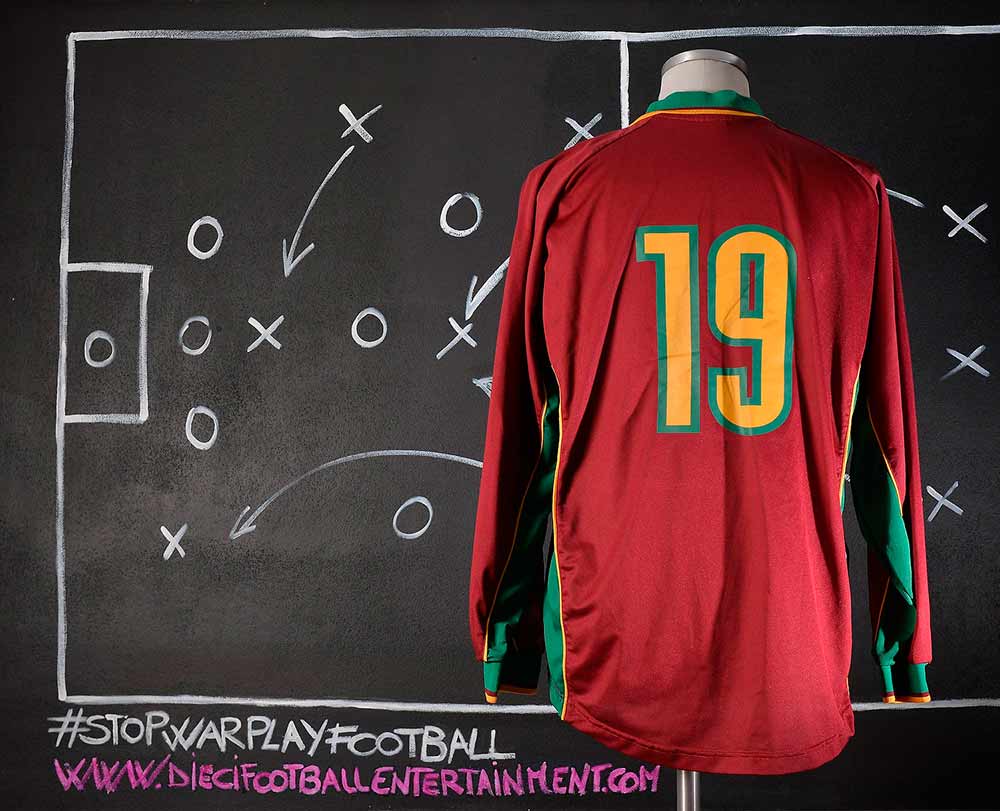 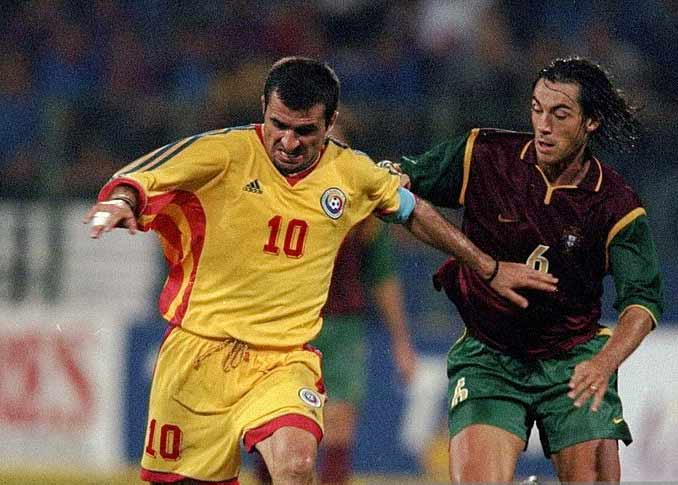 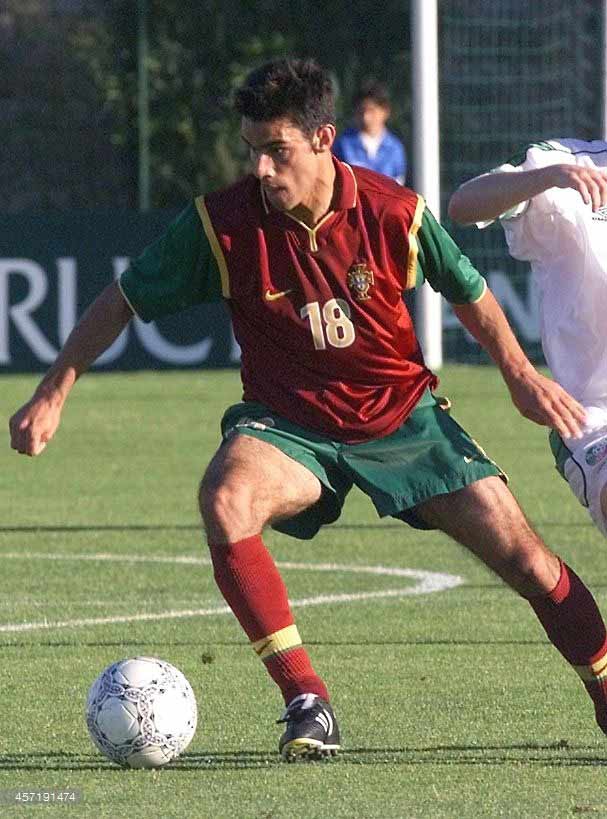 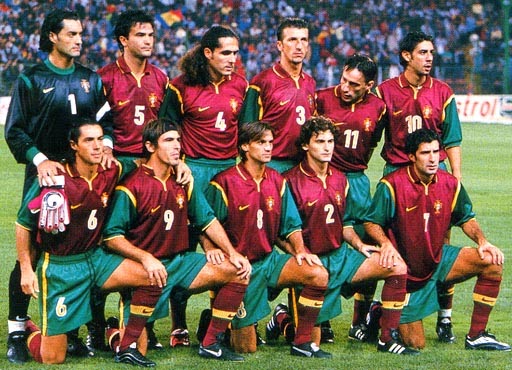 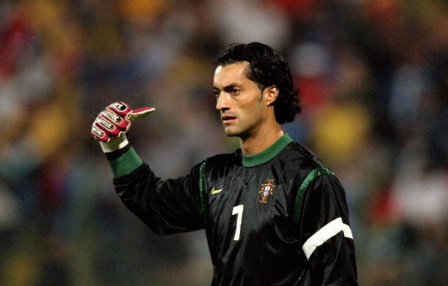 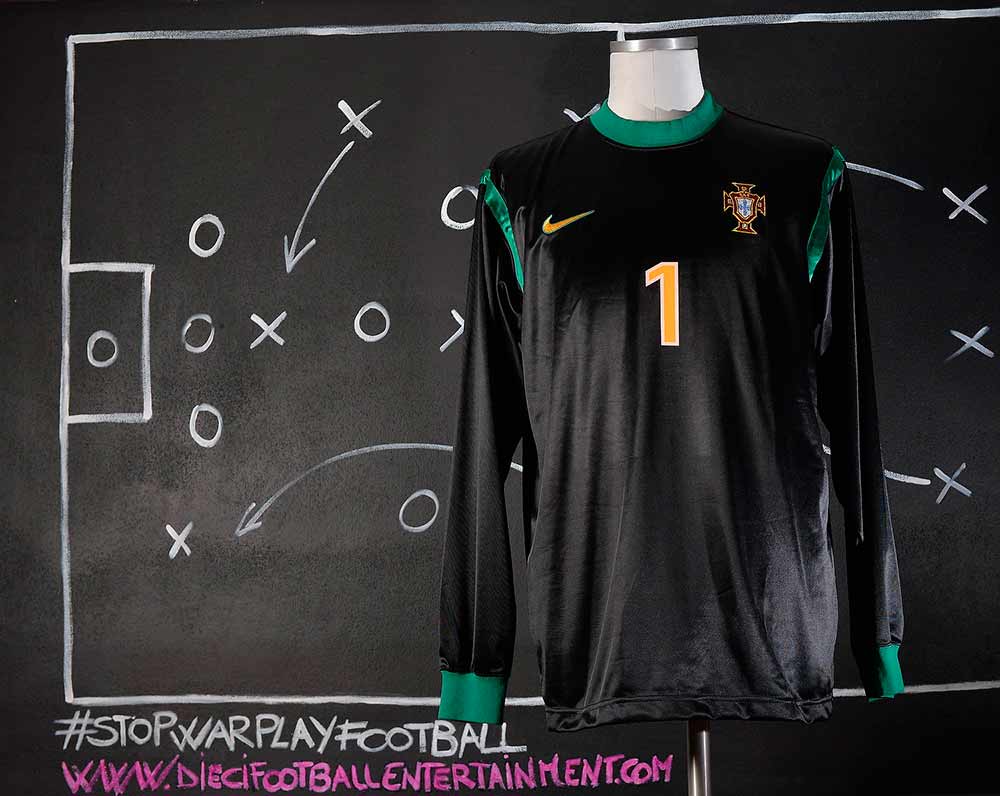 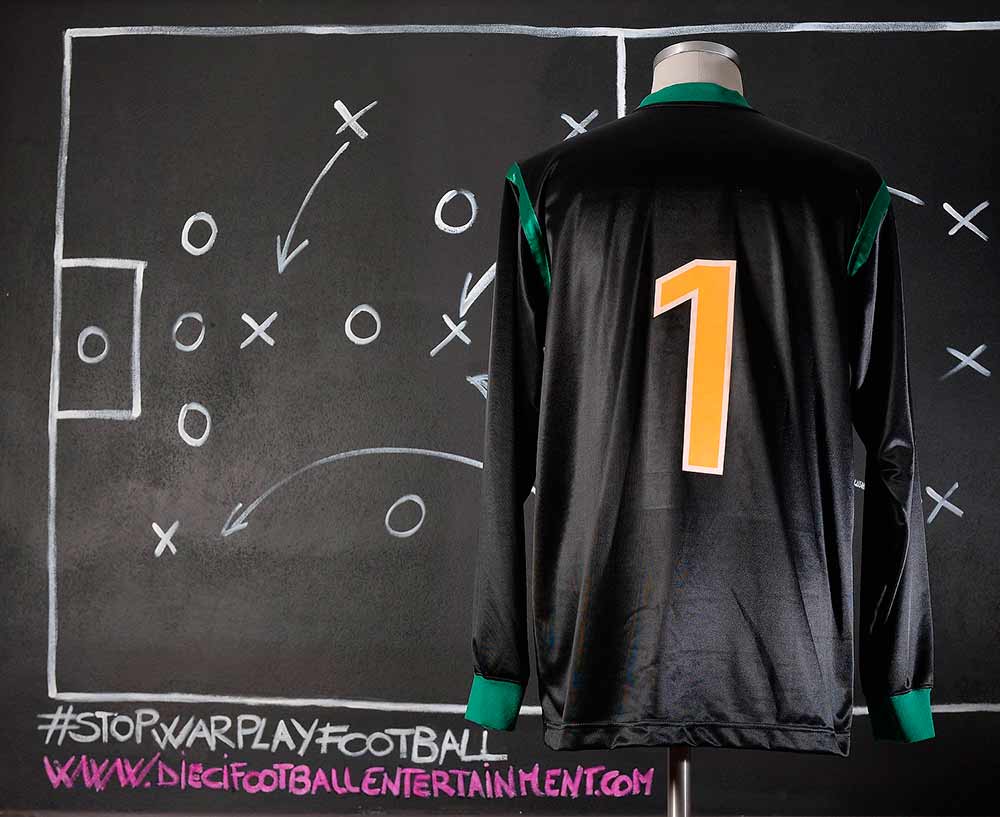 Baía had his senior debut on 19 December 1990 in a 1–0 friendly win over the United States at the age of 21. He went on to make 80 appearances for the national team until 2002, playing in all the games in UEFA Euro 1996 and 2000 (except one in the latter, as Portugal was already qualified) and in the 2002 FIFA World Cup. In Euro 2000, he stopped Arif Erdem’s penalty in the 2–0 defeat of Turkey in the quarterfinals. After the failure in the 2002 World Cup, coach António Oliveira was sacked when he refused to quit. Luiz Felipe Scolari was hired as his replacement and Baía, a stalwart for the past ten years with a record of caps in his position, was ditched. 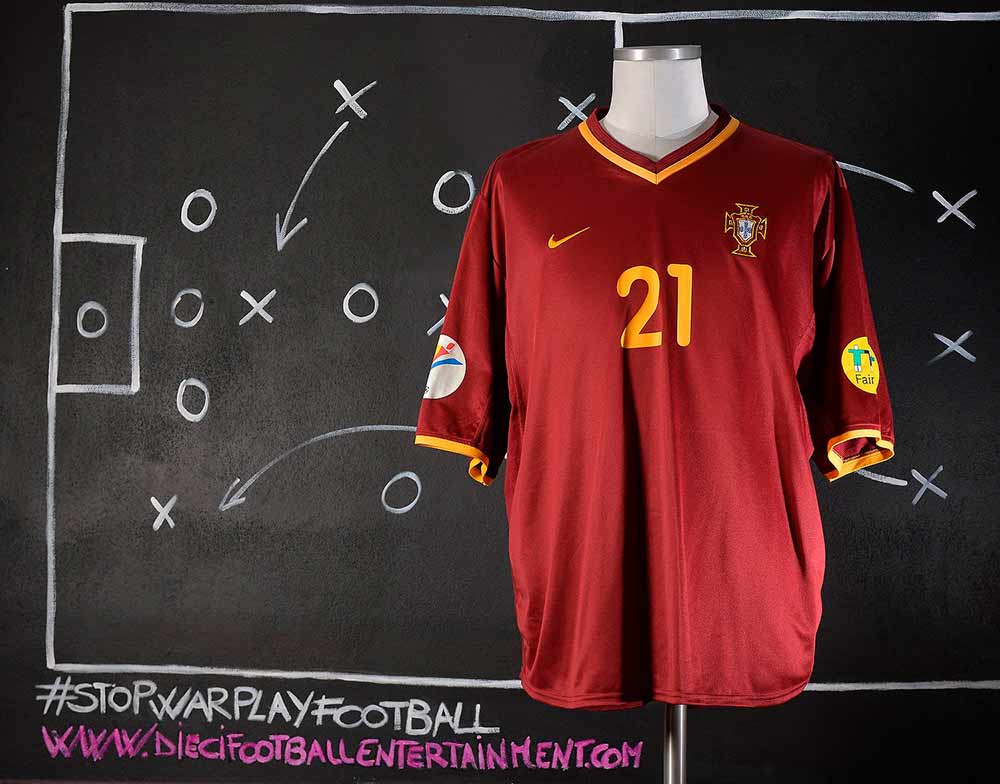 Nuno Gomes represented Portugal at every level, earning 143 caps all categories comprised and scoring at an excellent rate overall. He helped the under-20s finish third in the 1995 FIFA World Youth Championship by netting four goals in as many games, including two in the third-place game against Spain; the following year he appeared at the 1996 Summer Olympics, helping to an eventual fourth place. Gomes made his senior international debut at 19, in a 1996 friendly against France. He scored his first senior international goal in Portugal’s opening match at the UEFA Euro 2000, marking his fourth start with the winner as the side came from two goals down to beat England 3–2. He would finish the competition with four goals as the national team reached the last four, but earned a seven-month international ban after pushing referee Günter Benkö following the semi-final defeat by France, in which he had netted the opening goal; he was selected to the UEFA team of the tournament. With seven goals in only six matches, Gomes helped Portugal qualify for the 2002 FIFA World Cup – this included a four-goal performance in a 7–1 away win against Andorra. He would struggle to hold a starting place in the finals in South Korea and Japan, only appearing twice as a substitute; on 19 November 2003 he scored his second hat-trick, in only 21 minutes of play against Kuwait. Things went better for Gomes at Euro 2004, where he played each game and, after coming on as a half-time substitute, scored the winning goal against Spain to send the hosts through to the quarter-finals. He was often injured during the nation’s 2006 World Cup qualifying campaign, only managing to play four games, with one goal; he found limited time at the final stages and only made two appearances, but managed to find the back of the net with a header against hosts Germany in the third-place game, a 1–3 defeat. After the retirement of Pauleta, Gomes was expected to become his successor in the striker role. He played ten matches and scored three times in Euro 2008’s qualifying campaign, captained Portugal at the finals and scored against Germany in the quarter-finals, thus becoming the fourth player to score at three straight European Championships. After the appointment of Carlos Queiroz as coach, Gomes was constantly left out of the squad due to his lack of minutes at his club. During the 2010 World Cup qualification, he only took part in four out of twelve matches, all as a substitute, with Liédson and Hugo Almeida being preferred; he was later on left out of the 23-men squad for the final stages in South Africa, this being the first time the player was left out of a major tournament.On 7 October 2011, after more than two years out of international play, 35-year-old Gomes replaced Hélder Postiga in the last minute of a 5–3 home win against Iceland for the Euro 2012 qualifiers. Four days later, he played against Denmark in what was his 79th and last full international appearance; due to little playing time for his club in 2011–12, he was left out of Paulo Bento’s squad for the finals in Poland and Ukraine. 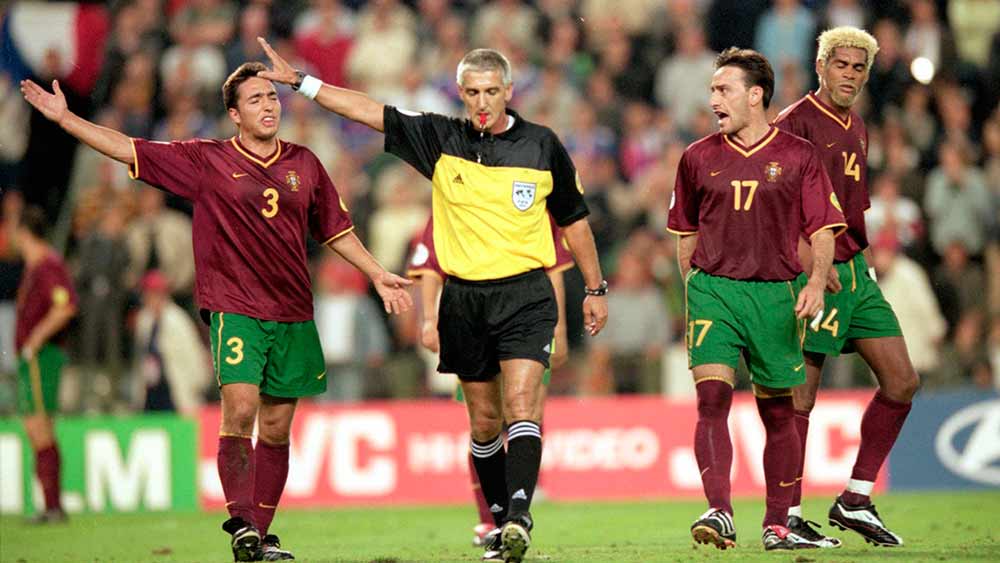 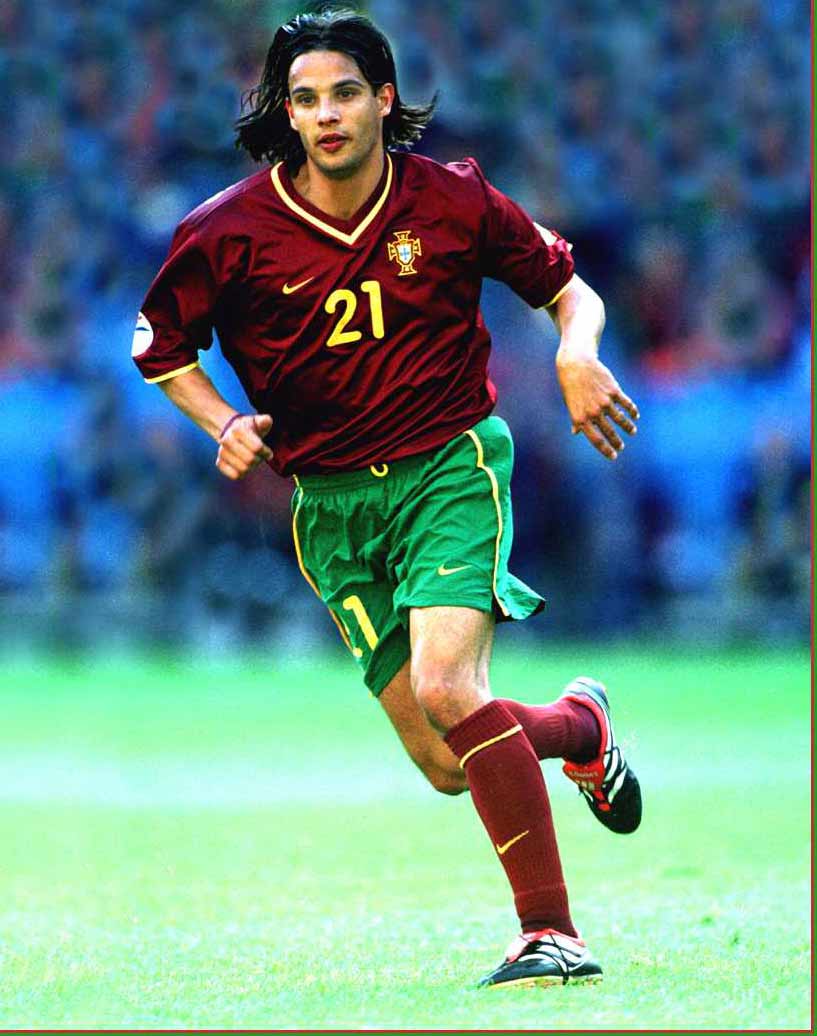 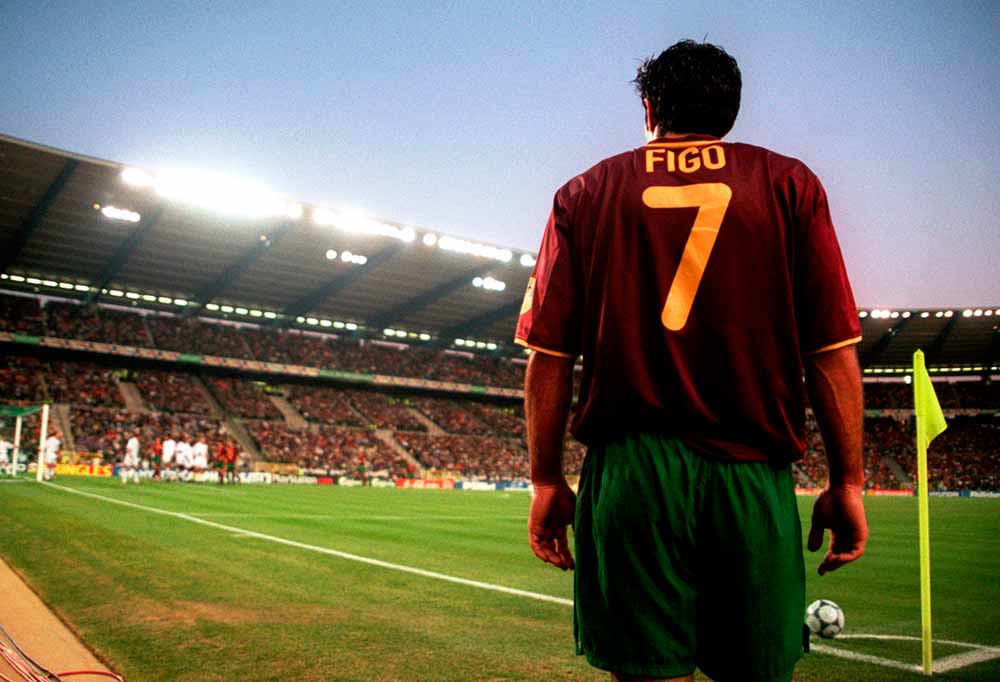 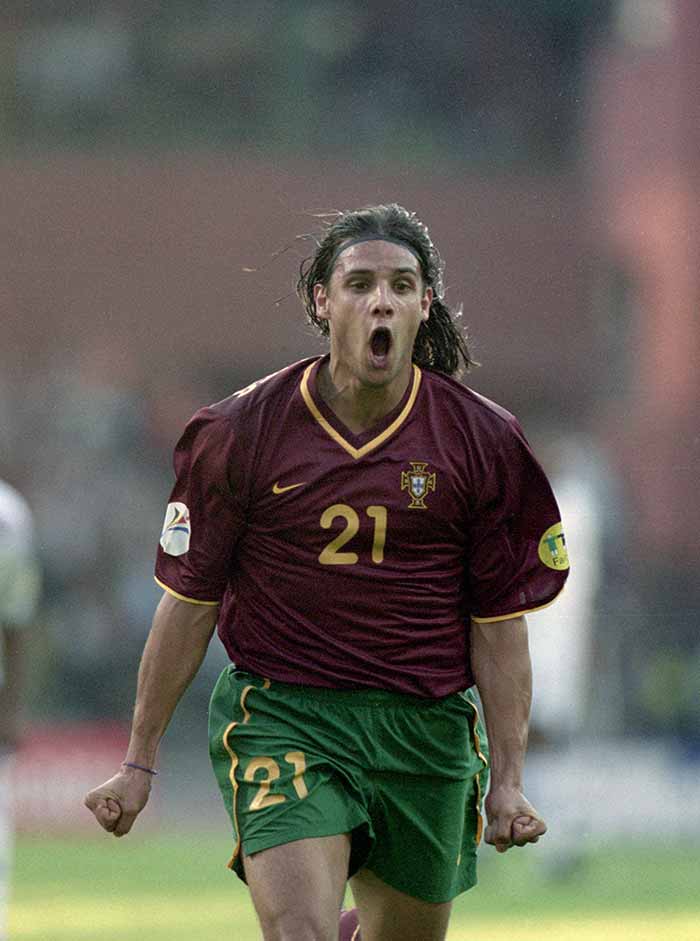 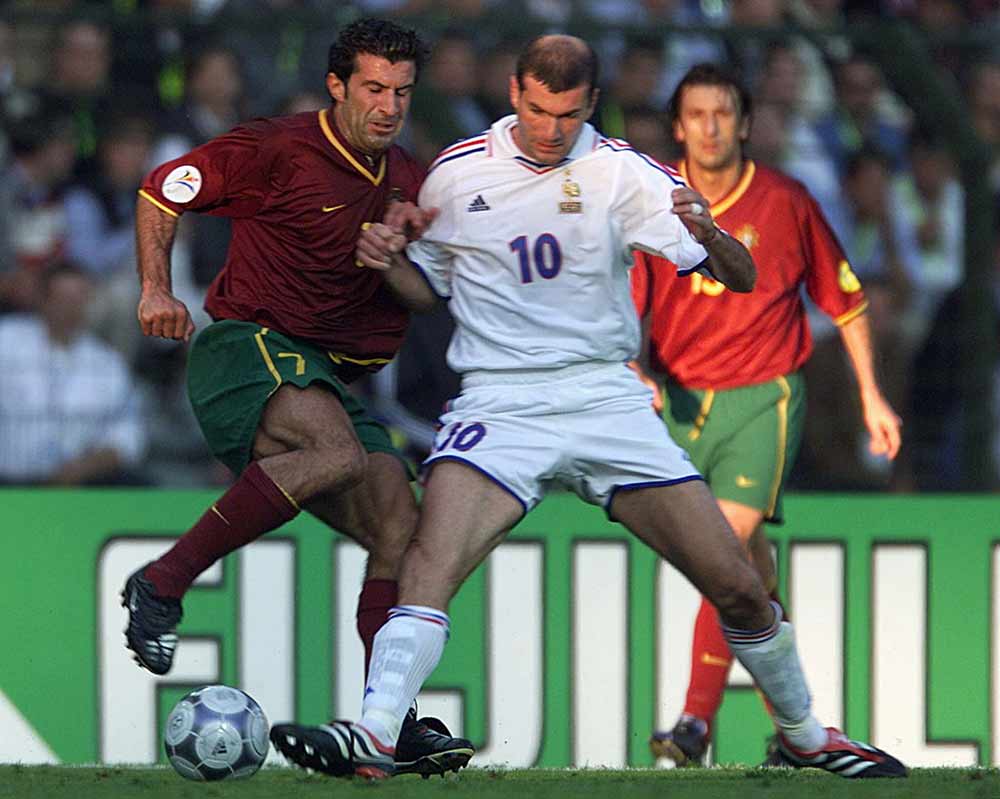 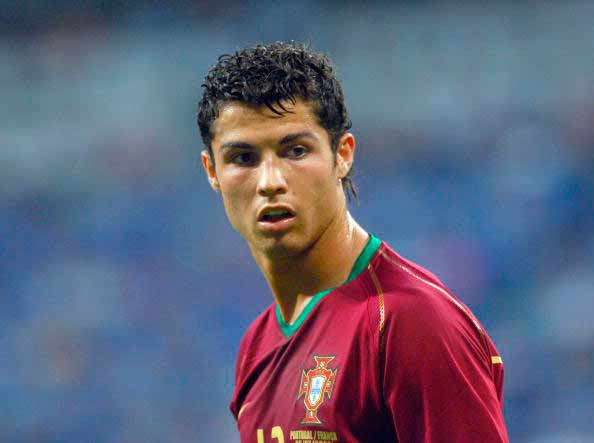 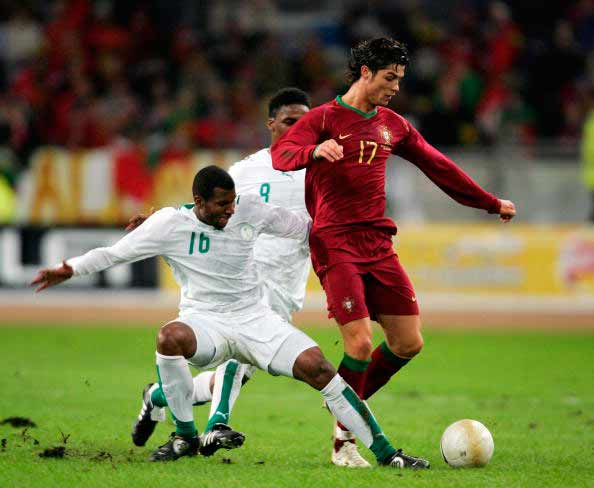 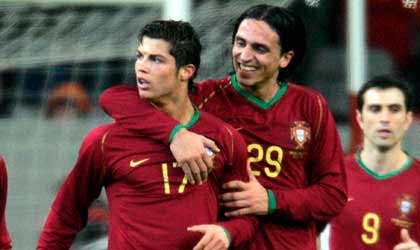 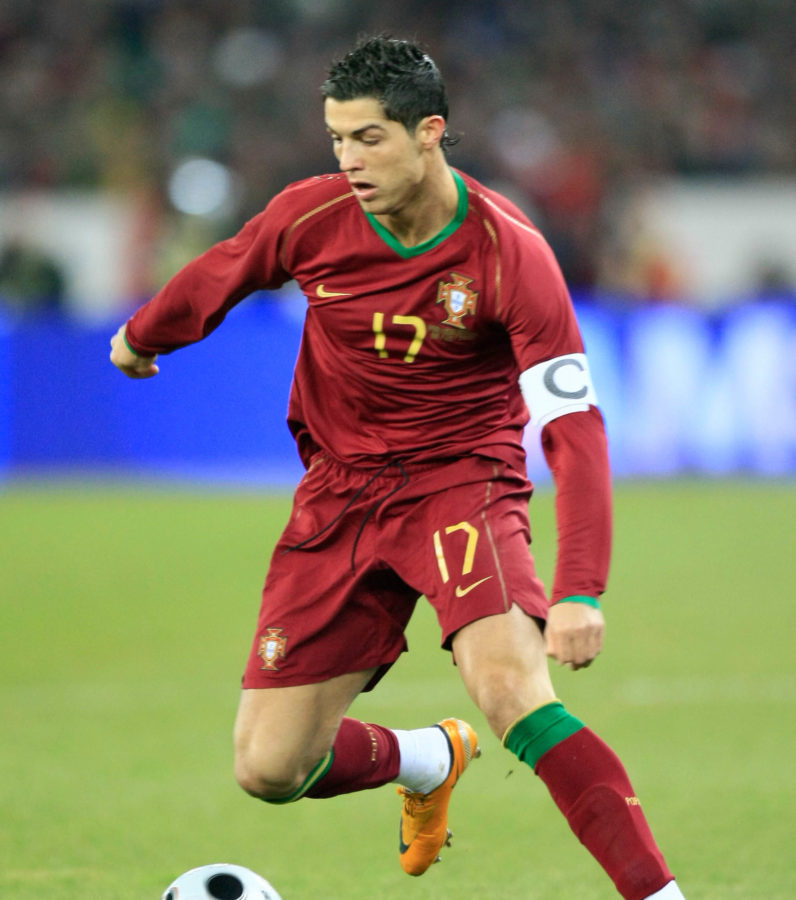 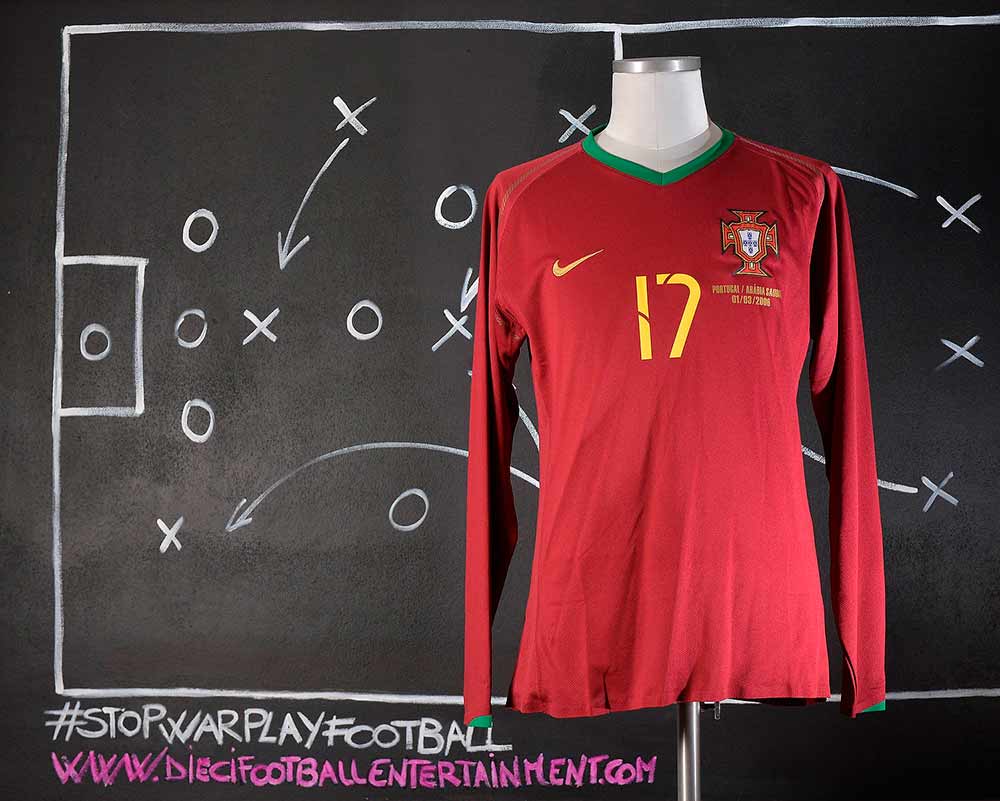 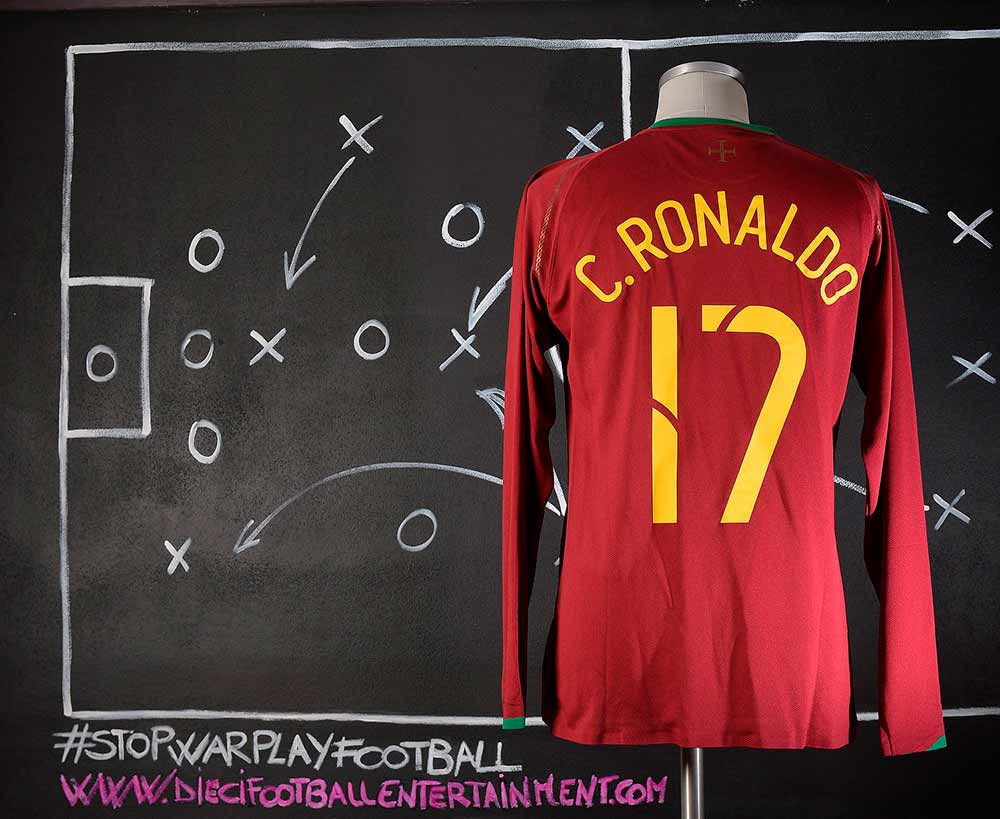 A Portuguese international, Ronaldo began his youth career in 2001. Apart from the under-15 team, he also represented the under-17, under-20, under-21, and under-23 national sides, amassing 34 youth caps and scoring 18 goals overall. He represented his country at the 2002 UEFA European Under-17 Football Championship, where they failed to progress past the group stage. Ronaldo also featured in the Olympic squad at the 2004 Summer Olympics, scoring one goal in the tournament, though the team was eliminated in the first round, finishing bottom of their group with three points after 4–2 defeats to eventual semi-finalists Iraq and quarter-finalists Costa Rica. At age 18, Ronaldo earned his first senior cap in a 1–0 victory over Kazakhstan on 20 August 2003. He was subsequently called up for UEFA Euro 2004, held in his home country, and scored his first international goal in a 2–1 group stage loss to eventual champions Greece. After converting his penalty in a shootout against England at the quarter-final stage, he helped Portugal reach the final by scoring the opening goal in a 2–1 win over the Netherlands, but the crucial last match ended in a 0–1 defeat. He was featured in the team of the tournament, having provided two assists in addition to his two goals. Ronaldo was the second-highest scorer in the European qualification for the 2006 FIFA World Cup with seven goals. During the tournament, he scored his first World Cup goal against Iran with a penalty kick in Portugal’s second match of the group stage. In the quarter-finals against England, his Manchester United teammate Wayne Rooney was sent off for stamping on Portugal defender Ricardo Carvalho. Although the referee later clarified that the red card was only due to Rooney’s infraction, the English media speculated that Ronaldo had influenced his decision by aggressively complaining, after which he was seen in replays winking at Portugal’s bench following Rooney’s dismissal. Ronaldo was subsequently booed during their 1–0 semi-final defeat to France. FIFA’s Technical Study Group overlooked him for the tournament’s Best Young Player award, citing his behaviour as a factor in the decision. 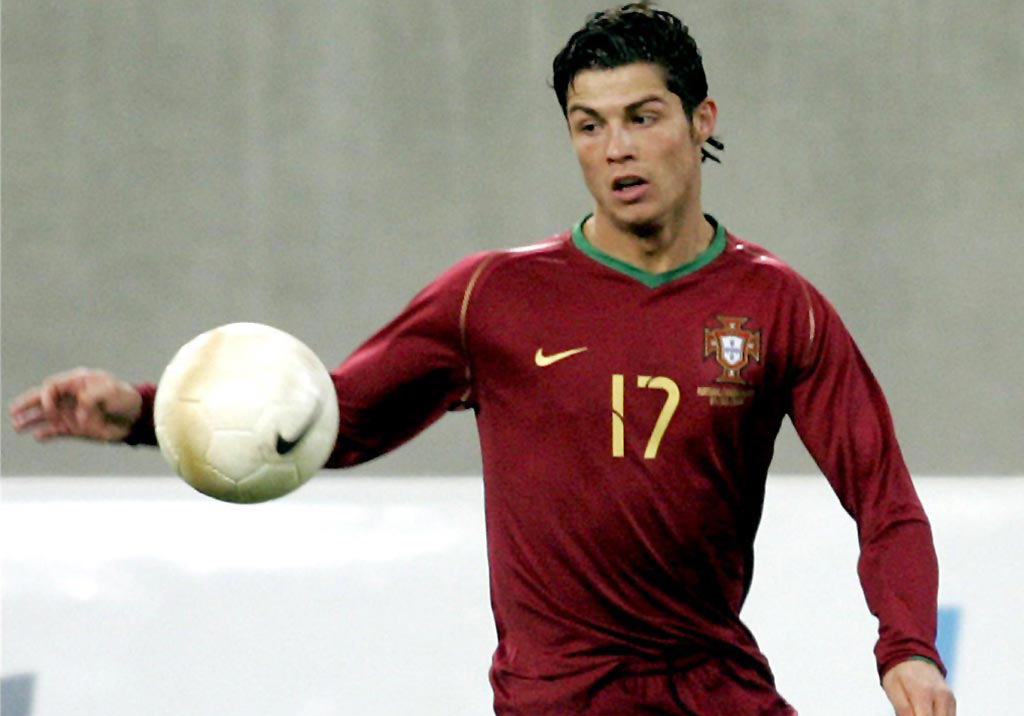 Grosso Grosso2017-10-16T21:52:08+00:00
Page load link
This site uses cookie technology, including third parties' ones. If you want to know more click here. If you access any element of this site outside this banner, you consent to the use of cookies. Ok
<script type='tex