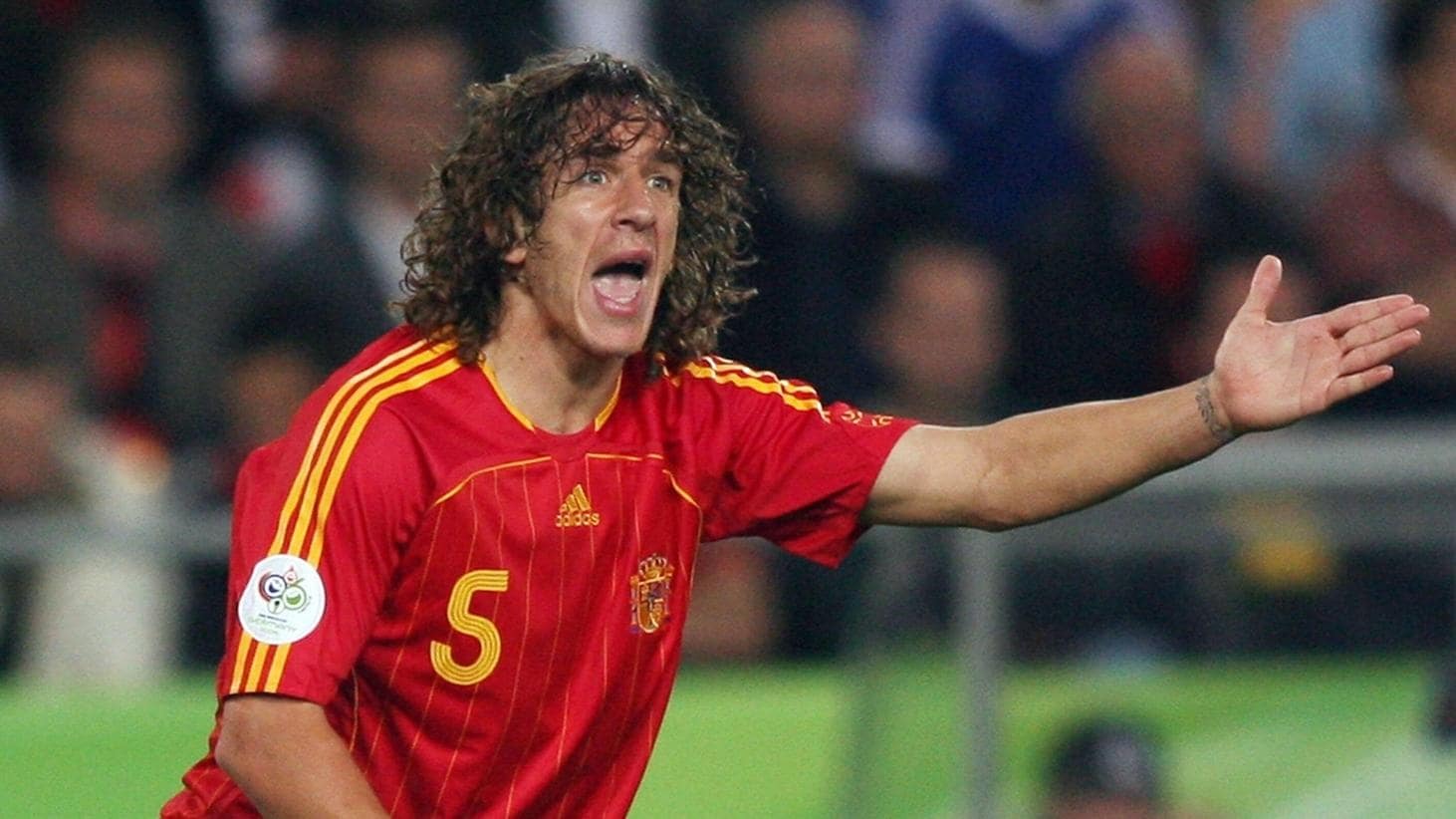 Carles Puyol Saforcada is a Spanish former professional footballer. Mainly a central defender, he could also play on either flank, mostly as a right-back, and was regarded as one of the best defenders of his generation. A one-club man, he served as the long-time team captain for his only club Barcelona after taking over from Luis Enrique in August 2004, and went on to appear in 593 competitive matches for the club and win 17 major titles, notably six La Liga trophies and three Champions League titles. A Spain international on 100 occasions, Puyol represented his nation at three World Cups and two European Championships. He was part of the squad that won the Euro 2008 and the 2010 World Cup tournaments. In the latter competition’s semi-final, he scored the only goal of the game against Germany. He also was a member of the teams that won a silver medal at the 2000 Summer Olympics in Sydney and which placed third at the 2009 Confederations Cup. 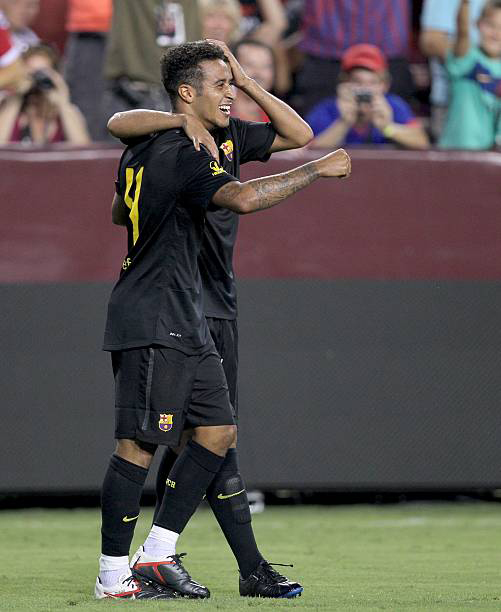 This shirt was issued for Carles Puyol for the Herbalife “World Football Challenge 2011”. The 2011 edition was the second World Football Challenge event, a series of friendly football matches played in the United States and Canada in July and August. The 2011 tournament increased in scale from the 2009 incarnation, bringing in thirteen teams from seven different countries. All the teams were either a member of the UEFA or CONCACAF federations. The field was highlighted by Spanish league and European champions Barcelona and English champion Manchester United. Club América was the only team that returned from the 2009 competition. This tournament for the first time also included five teams from Major League Soccer, the top-flight league for the host countries, United States and Canada. As another first, there were games played outside the United States, at Empire Field in Vancouver and BMO Field in Toronto. North American clubs that competed in 2011 included Chicago Fire, Guadalajara, Club América, Los Angeles Galaxy, New England Revolution, Philadelphia Union, and Vancouver Whitecaps FC. Four representatives from Europe’s top leagues of England and Spain, all of whom won their country’s blue ribbon competitions in the 2010–11 season joined the North American clubs, those being: Spanish and European champions Barcelona, FA Cup winners Manchester City, Premier League champions Manchester United and Copa del Rey winners Real Madrid. This style of shirt was never used by the team since they only played with the home kit and the away black kit. Also Puyol missed all the tournament’s games due an injury. 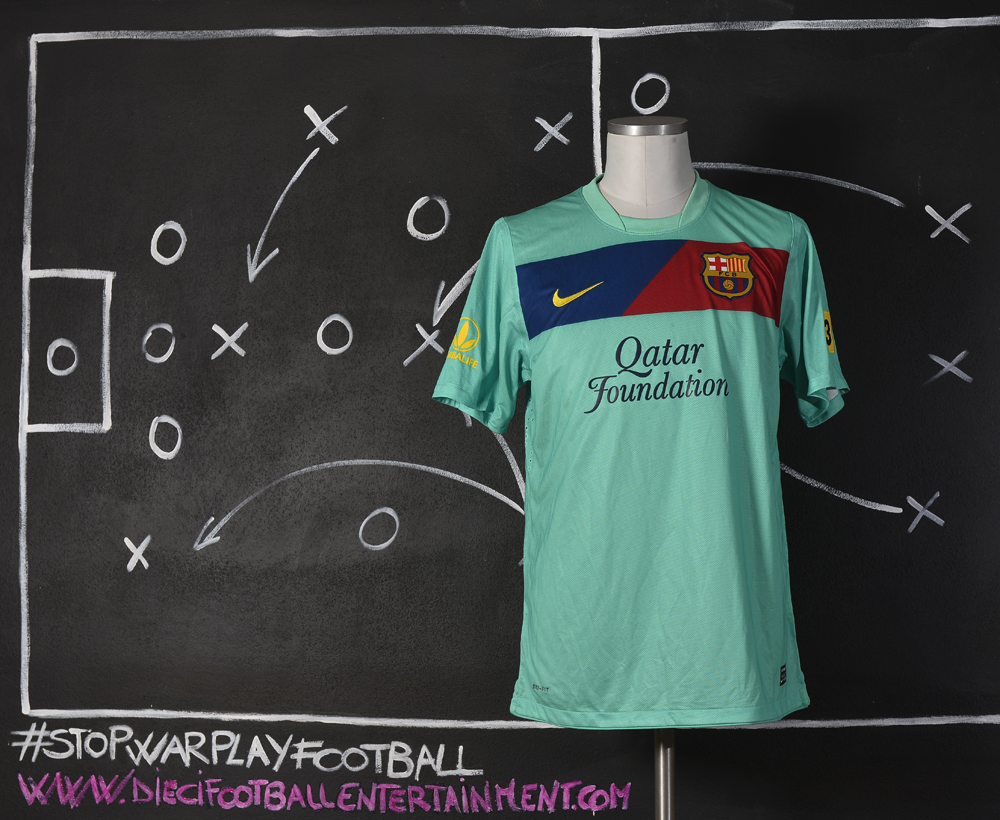 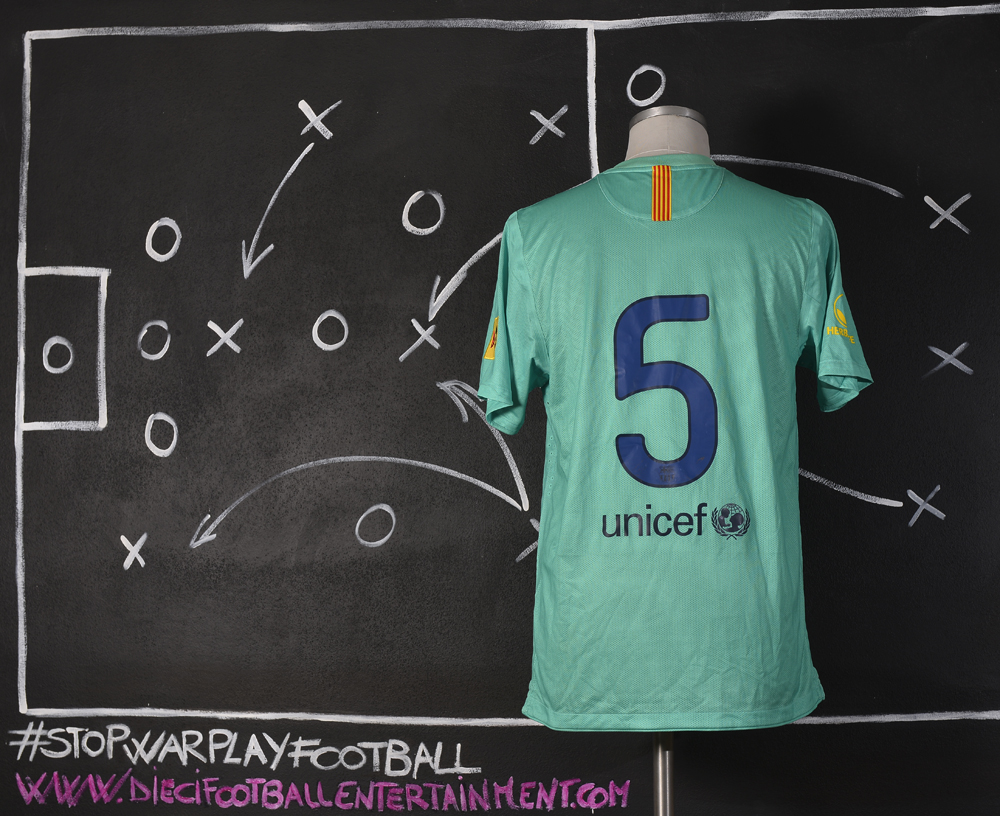 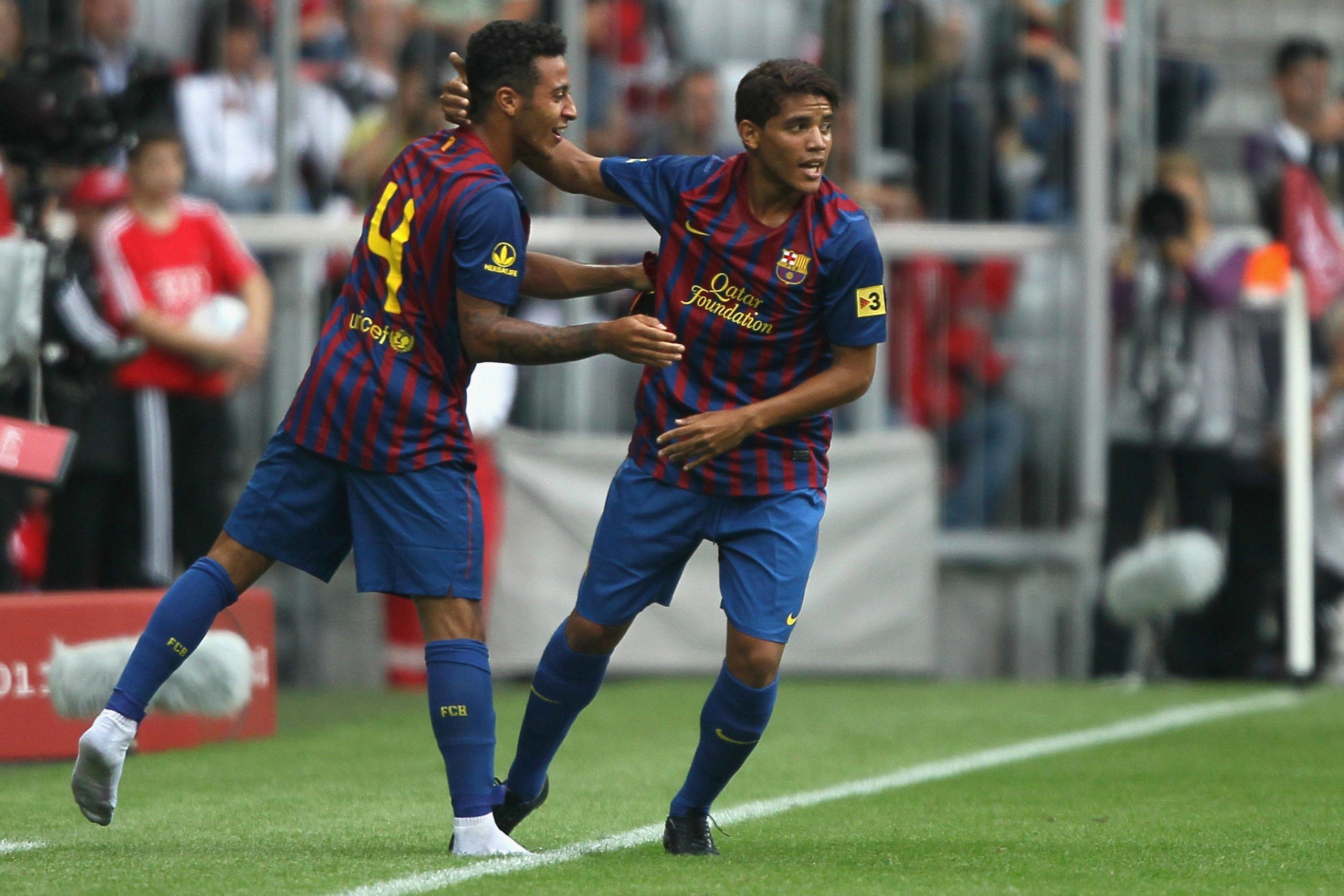 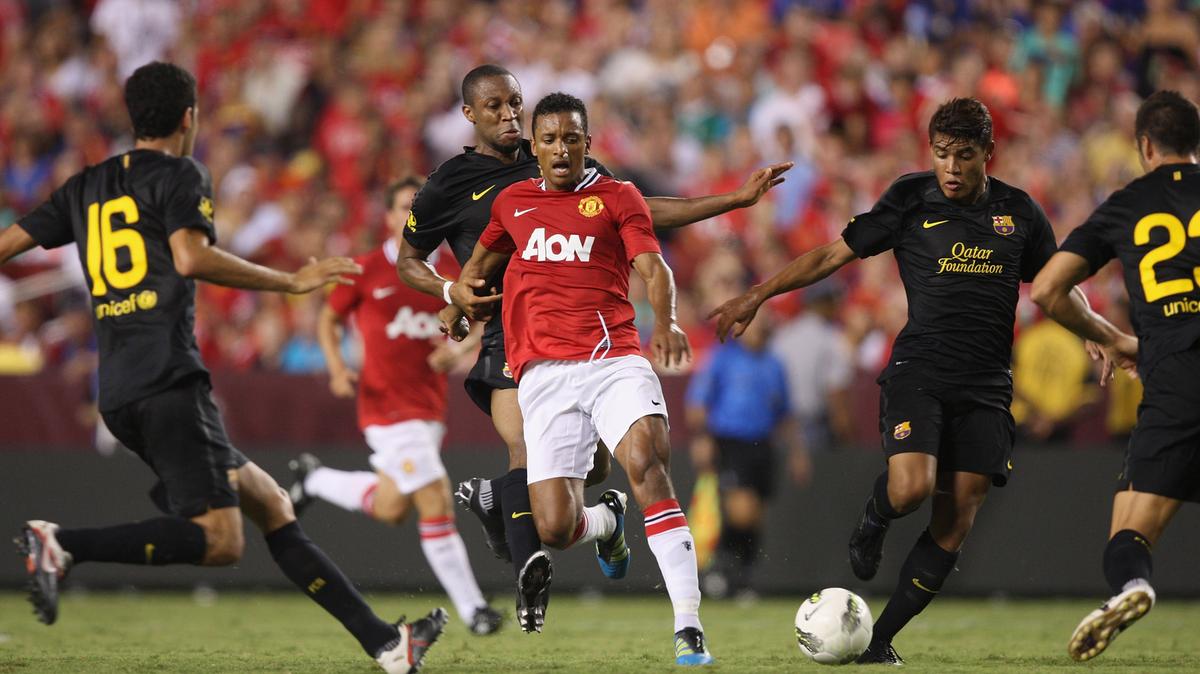 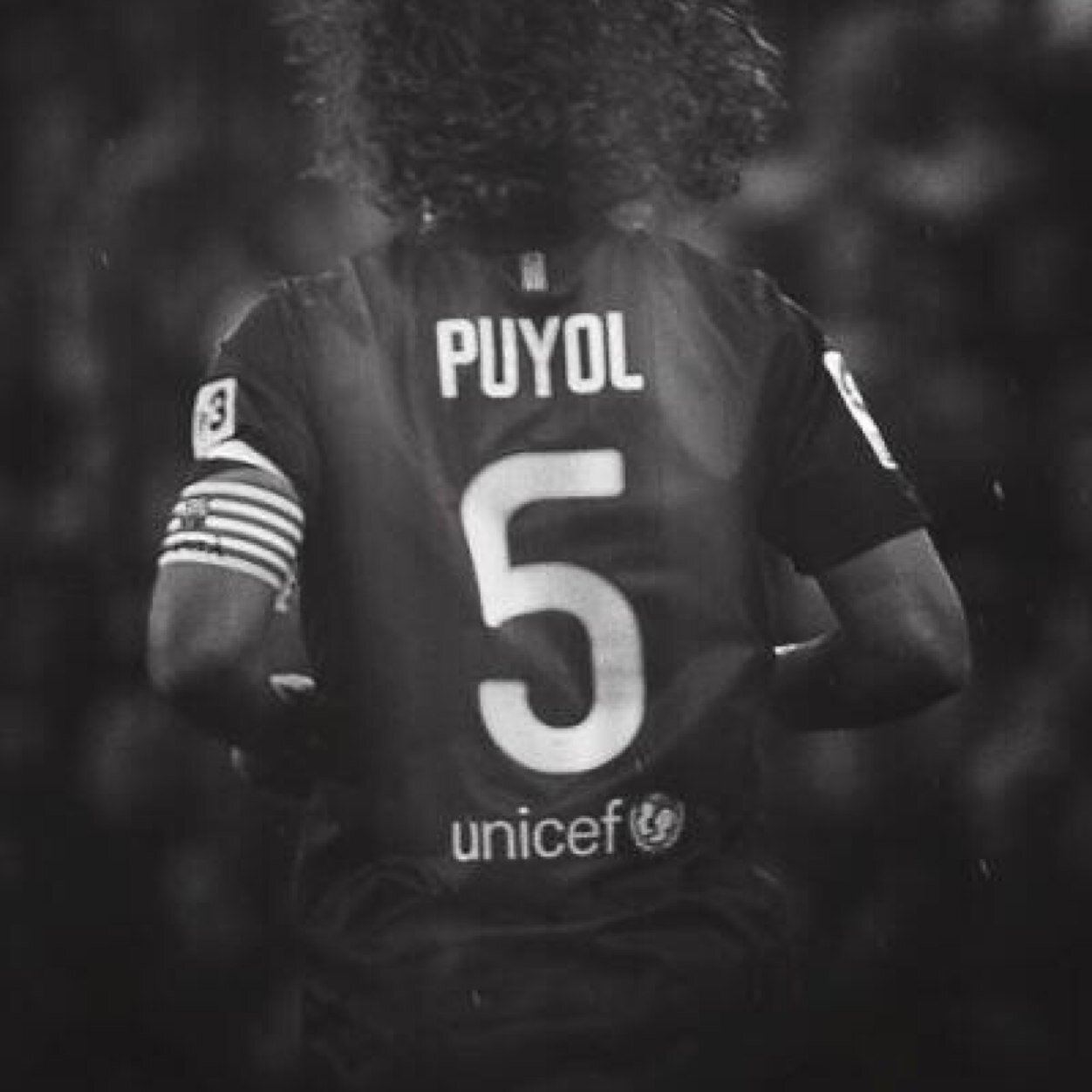 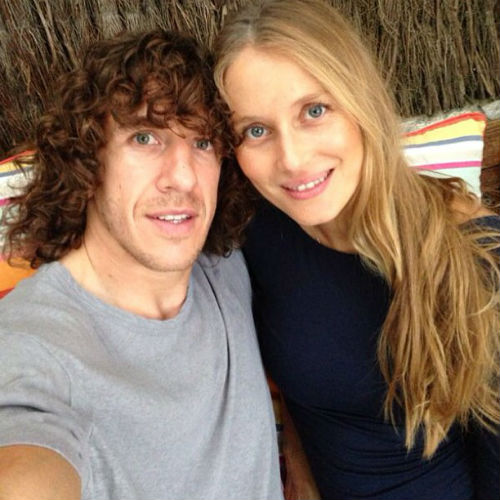 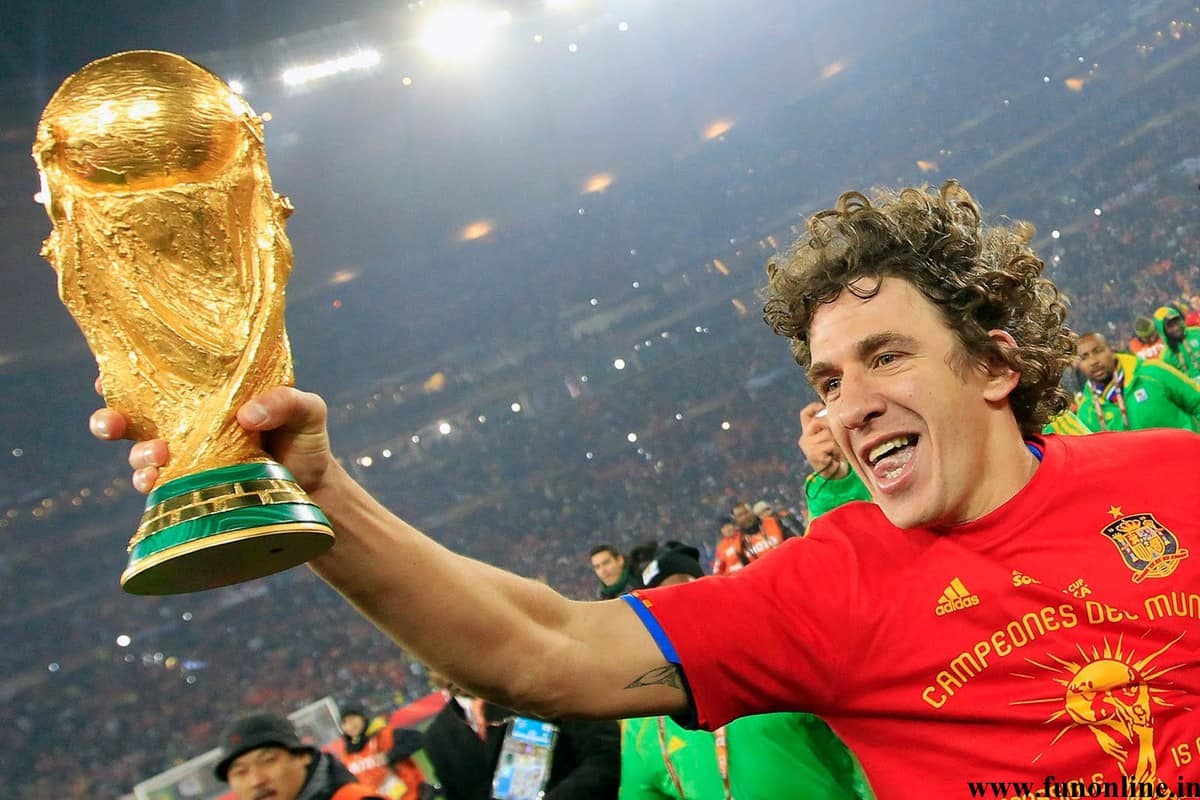 Puyol won his first cap for Spain on 15 November 2000 against the Netherlands, and remained a regular fixture in the following years. He played for his country at the 2000 Olympics, 2002 FIFA World Cup, UEFA Euro 2004, 2006 World Cup, Euro 2008, 2009 FIFA Confederations Cup and the 2010 World Cup. During the 2002 World Cup, Puyol scored an own goal in the 3–1 win over Paraguay in the group stages. In the round of 16 tie against Ireland, he assisted Fernando Morientes; following a 1–1 deadlock after extra-time, his team prevailed following a 3–2 penalty shoot-out victory. Spain were eliminated in the quarter-finals of the competition by co-hosts South Korea, after a 5–3 shoot-out defeat. Puyol started every game except one at Euro 2008, and Spain’s defence only conceded two goals in his five games. They won the final against Germany, and he was named in the Team of the Tournament alongside his defensive partner, Carlos Marchena of Valencia. He started in three out of five matches at the 2009 FIFA Confederations Cup, and acted as captain when Iker Casillas was rested for the last group stage fixture; they finished third, and he was included in the Team of the Tournament with four of his teammates. In the 2010 World Cup in South Africa, Puyol started every match and played almost every minute (he was replaced by Marchena in the 84th minute of the quarter-final against Paraguay). He scored the only goal in the semi-final with Germany, a powerful header from a corner taken by Barcelona teammate Xavi, which sent the national team through to their first World Cup final. In the decisive match, he featured for the full 120 minutes as the side defeated the Netherlands 1–0. Spain only conceded two goal throughout the tournament – none of which came in the knock-out stages – also keeping five clean sheets, a record for a World Cup–winning team, shared with the 2006 Italy side and 1998’s France. He also completed 88% os his passes, the third–highest completion rate of any player in the competition alongside his teammate Sergio Busquets, and was named to the team of the tournament for his performances. On 1 August 2010, aged 32, Puyol announced that he would continue to represent the national team for at least another two years. He missed Euro 2012 due to a knee injury sustained in a league game against RCD Espanyol in early May, which required surgery and five to six weeks’ recuperation. The following year, he was ruled out of the Confederations Cup, once again due to physical problems. Puyol played his 100th and final international on 6 February 2013, captaining Spain to a 3–1 friendly win over Uruguay in Doha, Qatar. Puyol’s long shaggy hair was a distinctive feature throughout his career. Barcelona manager Van Gaal suggested he get it cut when the player was 19, immediately after his first training session with the senior players: “What’s your problem, can’t you afford the money for a haircut?”, Van Gaal asked him in his office. “I said nothing,” Puyol remembered, “and to this day have kept my hair as it is. In 2006, Puyol said that when not working, he leads “a very quiet life… I’ve not been to a nightclub in Barcelona for years either. When I go out, I stay in a restaurant with my friends.” Puyol’s father, Josep, died in a farming accident in late 2006 while Carles was on his way to play a match against Deportivo de La Coruña. He was informed of the news by coach Frank Rijkaard upon landing.[89] He said that this, combined with an injury led to a dark period, with Spanish national team physio Raúl Martínez eventually coming to Barcelona: in the player’s words, “…[he] gave me a great telling off. He made me react, and I began to try to be more cheerful, and not overwhelmed by it all.” In March 2009, Puyol told Goal.com: “I do not like to go out much, although it is good to disconnect and I like to read.” In September 2010, he started a relationship with model Malena Costa. In October of that year, he scored through a header in a 2–1 home win against Valencia CF and dedicated the goal to her by making a heart symbol with both hands. “I dedicate the goal to my girlfriend”, he said after the game. In 2011, Puyol paid €30,000 for specialist private treatment for Miki Roqué, a footballer from his home province who was suffering from pelvic cancer. However, the latter died in 2012. Puyol started a relationship with Vanessa Lorenzo in 2012. The couple had two daughters, Manuela (born 2014) and María (2016). Puyol was invited by Iranian television channel IRIB TV3 to provide commentary on the World Cup match between Iran and Spain on 20 June 2018 in a programme hosted by Adel Ferdosipour, but was not allowed in the studio. According to news website Entekhab, the former player said that he had been told by the Islamic Republic of Iran Broadcasting that he could not appear in the programme “because of his looks (long hair)”; the veteran channel director had been replaced by one closer to Iran’s ultra-religious hardliners weeks before, and this incident ultimately led to some ridicule within Iran on Twitter. 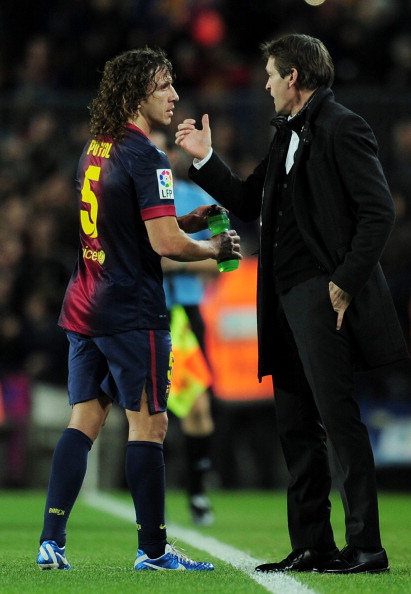 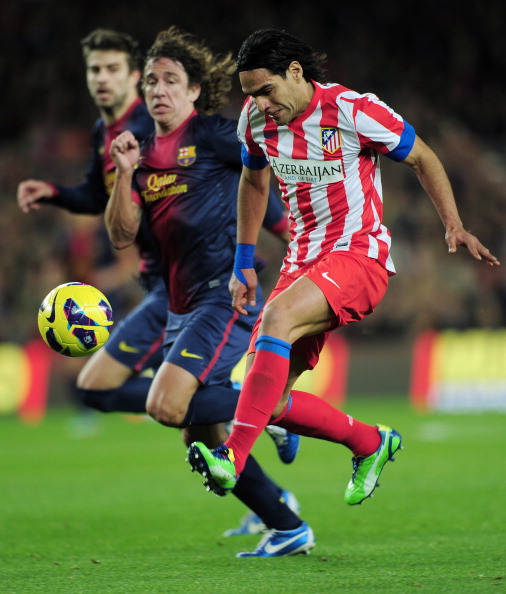 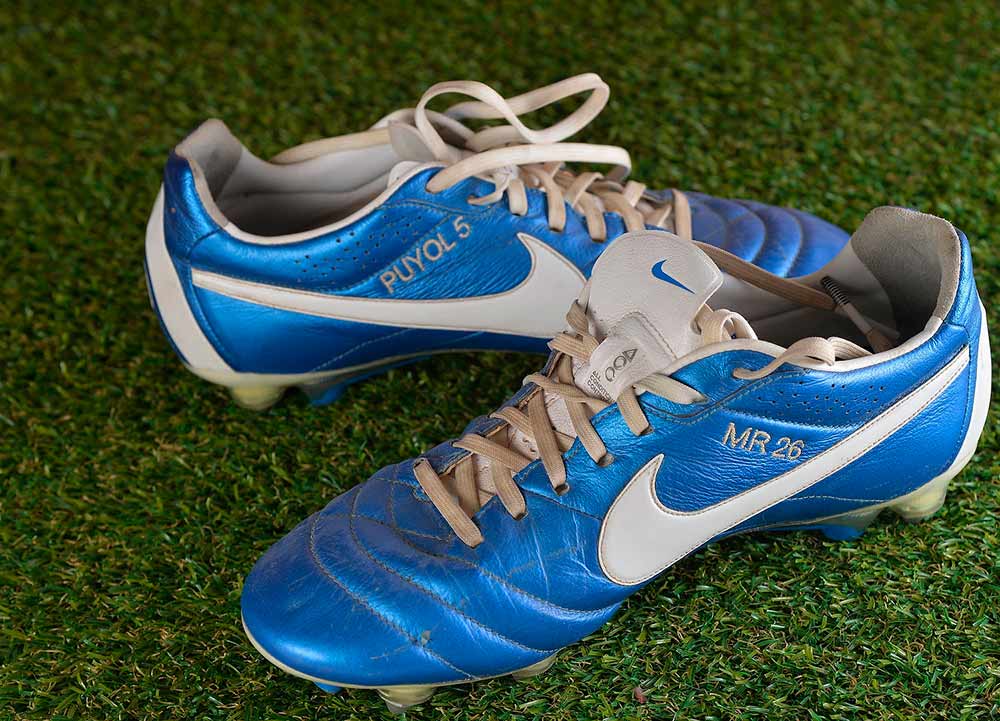 Puyol was regarded as one of the best defenders of his generation. Mainly a central defender, he was a versatile player who could also feature on either flank, mostly as a right-back, in particular in the first part of his career. He also initially played as a defensive midfielder in his early career, and had previously even been deployed as goalkeeper and striker in his youth. Described as a “no–nonsense” player, Puyol was known for his commanding presence in the air despite his modest stature, as well his ability to read the game, and his intense commitment and ruggedness as a defender, in particular when challenging for the ball. According to Barcelona’s head doctor, he was “the strongest, who has the quickest reactions, and who has the most explosive strength.” In 2006, Simon Talbot of The Guardian described Puyol as: “Barcelona’s very own Captain Caveman, playing football with his heart on his sleeve and his hair in his eyes, throwing himself about the pitch and launching wholeheartedly into kamikaze tackles like a hyperactive, lunatic kid.” Club fans referred to him as “The Wall”. 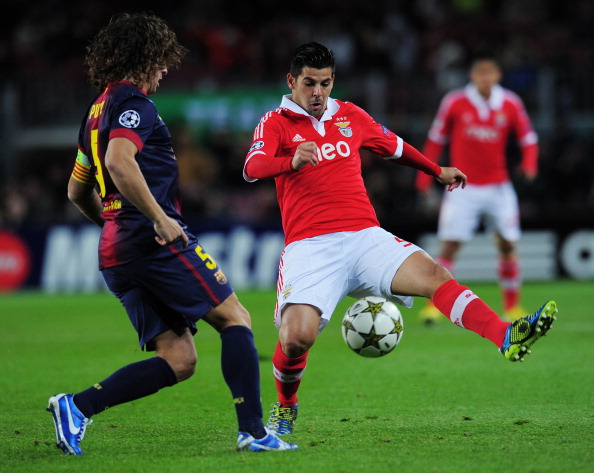 Grosso Grosso2021-02-19T11:50:56+00:00
Page load link
This site uses cookie technology, including third parties' ones. If you want to know more click here. If you access any element of this site outside this banner, you consent to the use of cookies. Ok
Go to Top