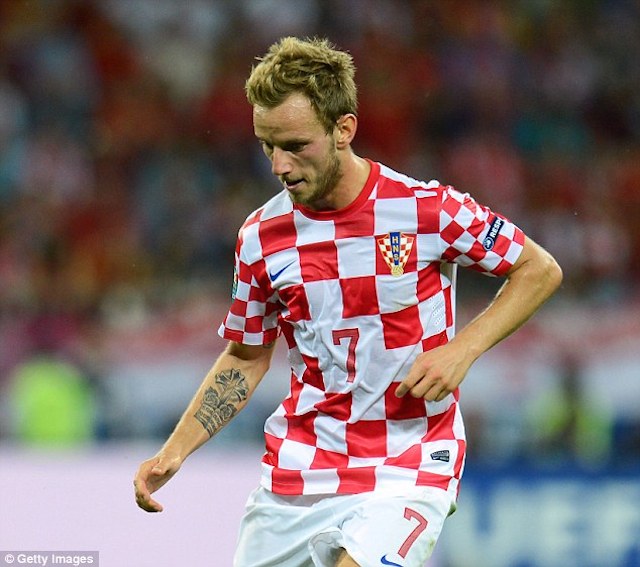 Ivan Rakitić is a Croatian professional footballer who plays as a central or attacking midfielder for the Croatia national team. Rakitić started his professional career at Basel and spent two seasons with them before he was signed by Schalke 04. After spending three-and-a-half seasons in the Bundesliga, he was signed by Sevilla in January 2011. Two years later, Rakitić was confirmed as the club captain and captained the team to UEFA Europa League triumph. In June 2014, Barcelona and Sevilla reached an agreement on the transfer of Rakitić. In his first season with Barça, he won the treble of La Liga, Copa del Rey and UEFA Champions League. He scored the first goal of the 2015 Champions League Final and became the first player ever to win the Champions League a year after winning the Europa League while playing for two clubs. At the international level, Rakitić plays for the Croatia national team. Although naturally a product of Switzerland’s youth level, Rakitić pledged his international career to his parents’ country of Croatia instead. He made his debut for Croatia in 2007 and has since represented the country at UEFA Euro 2008, UEFA Euro 2012, the 2014 FIFA World Cup, UEFA Euro 2016 and the 2018 FIFA World Cup, winning a runners-up medal in the latter tournament, and earning over 100 caps. 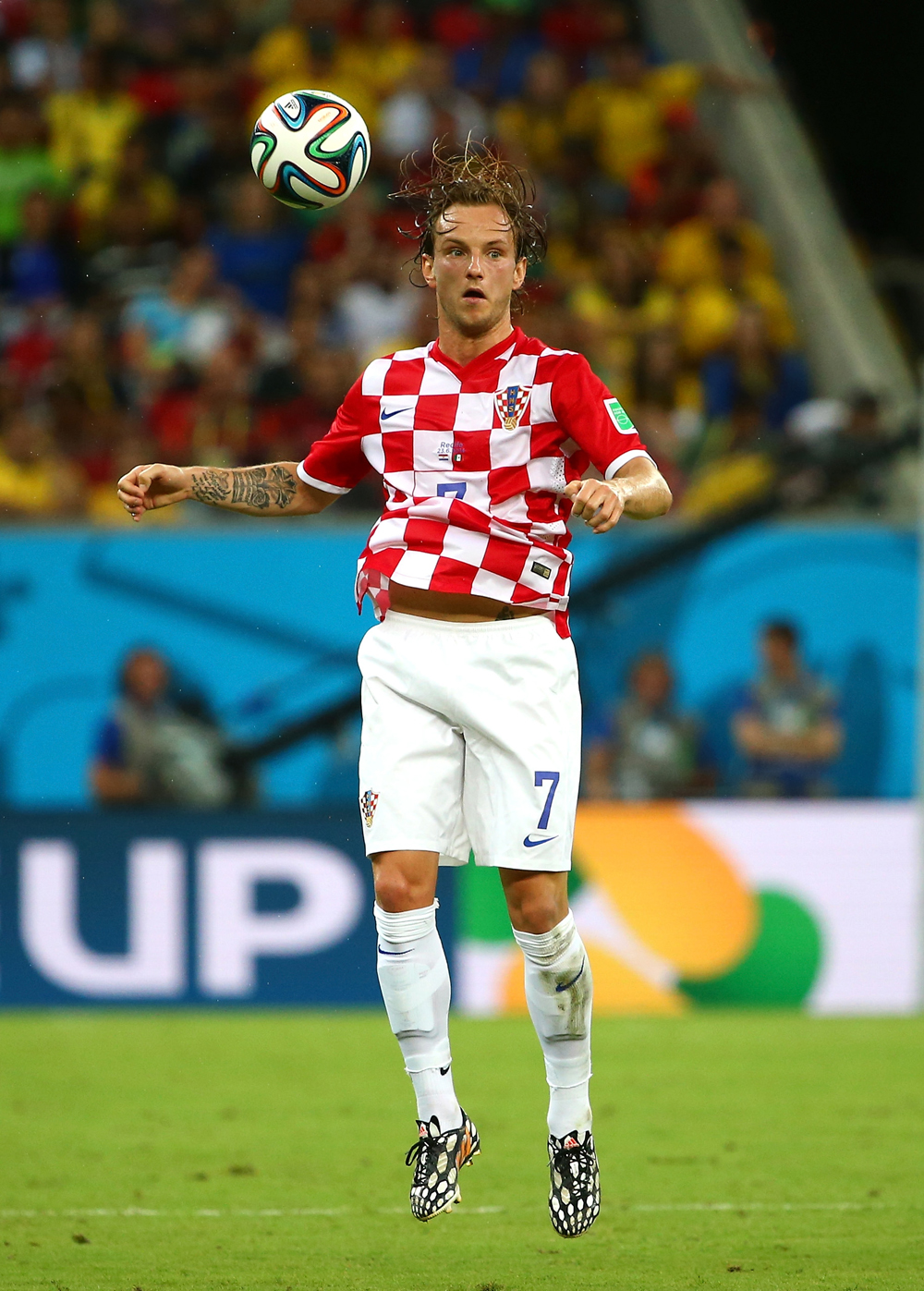 In the 2014 World Cup qualifying campaign, on 12 October 2012 Rakitić scored a goal from a free-kick against Macedonia at Philip II National Arena to help secure a 1–2 victory for Croatia. Eventually, after the playoffs, the team qualified for the World Cup final stages. They were drawn into Group A alongside Brazil, Mexico and Cameroon. Croatia played the opening match against Brazil, which they lost 3–1. In the second match, Croatia won 4–0 against Cameroon, but did not progress as they lost 1–3 against Mexico, with Rakitić providing the assist for the only Croatian goal. 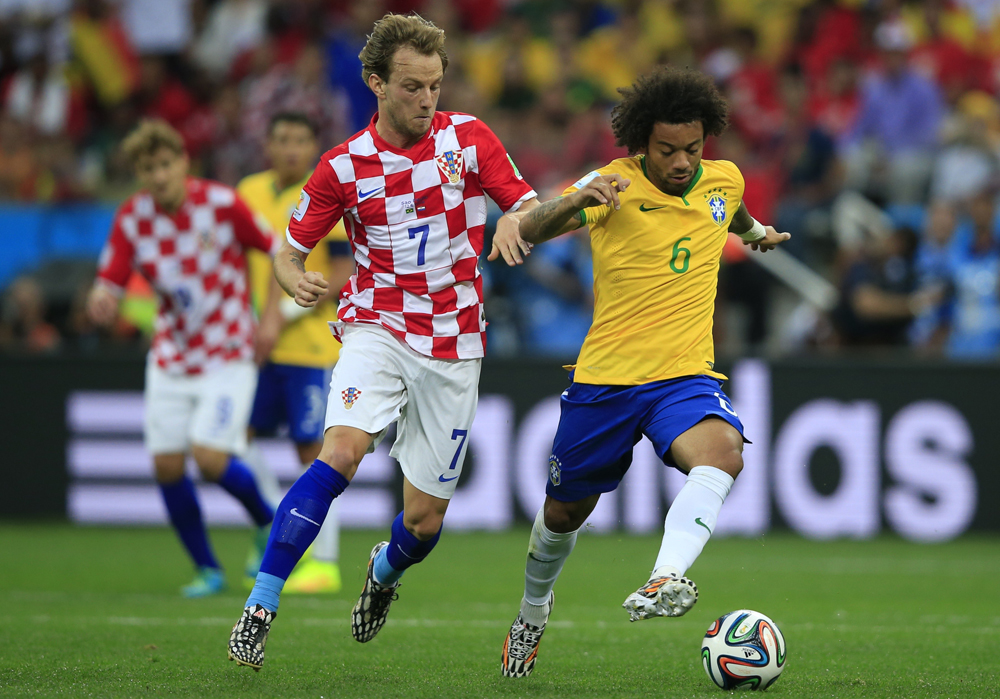 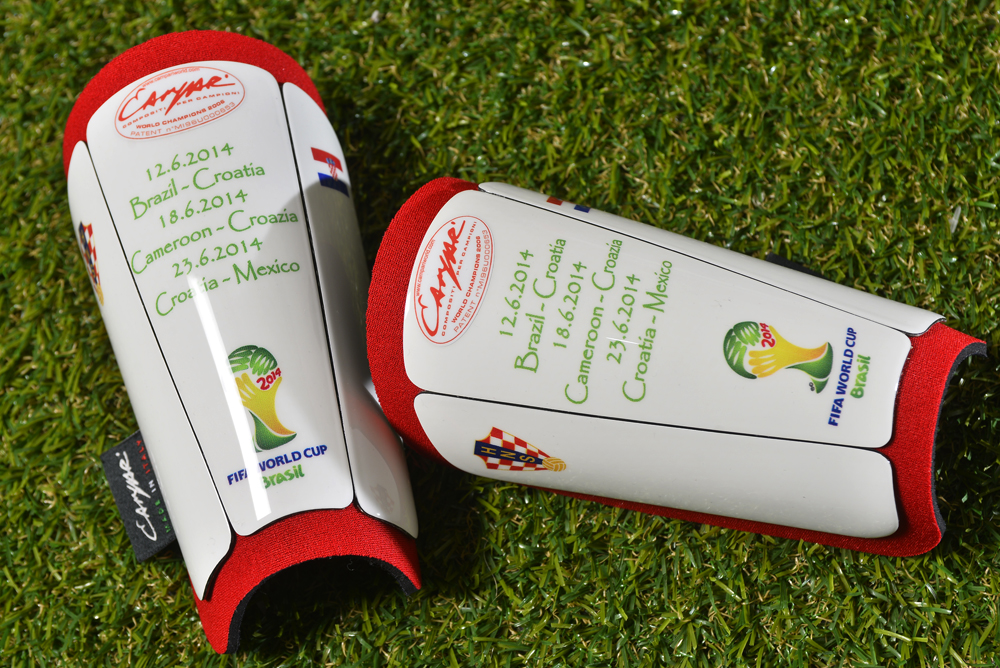 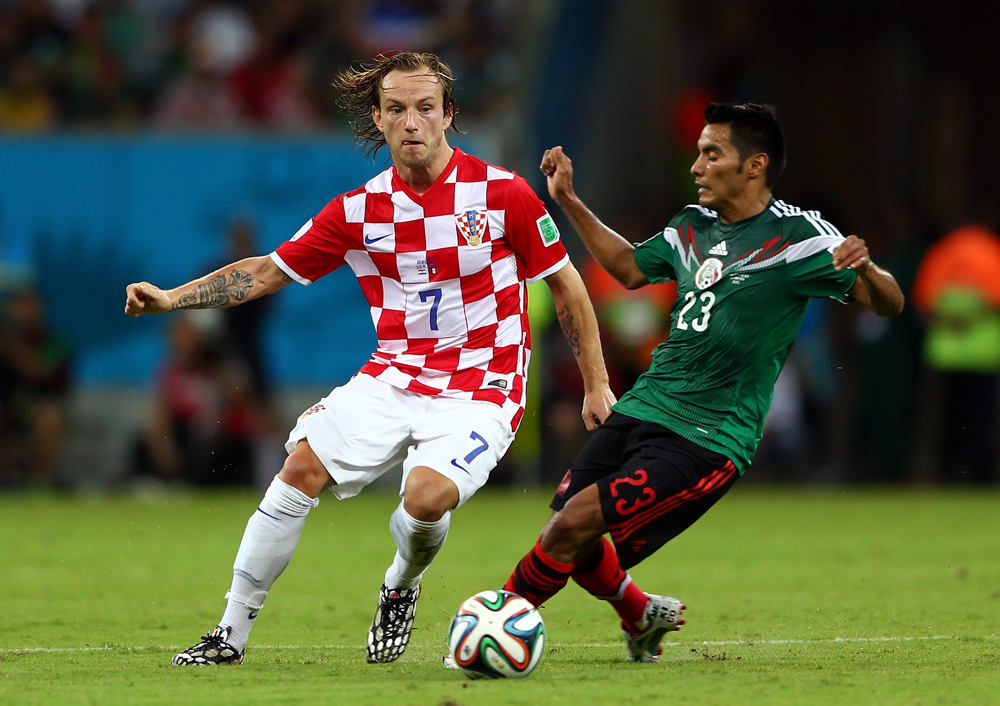 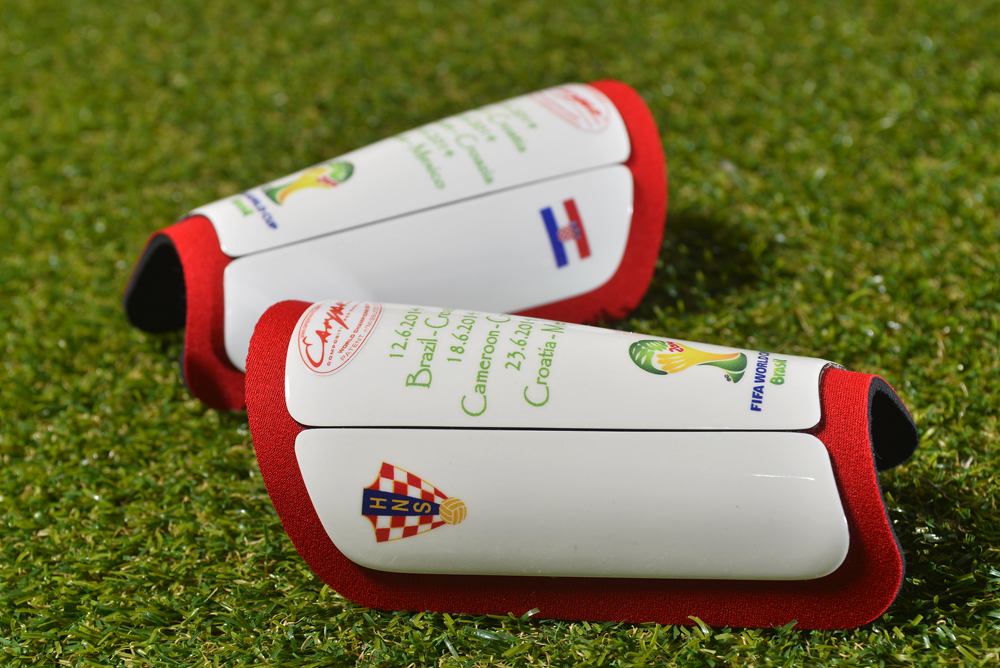 Rakitić married Raquel Mauri in April 2013 in Seville after two years of dating. Rakitić initially met her on the first night he arrived in Seville in the summer of 2011, at a hotel bar, and attributed his fluent learning of Spanish, to his repeated attempts to take her out on a date. In July 2013, their daughter Althea was born. In May 2016, their second daughter, Adara, was born. He speaks Croatian, German, Spanish, English, French and Italian. In late June 2016, Rakitić rented a villa on the island of Ugljan, where he arrived on vacation with his family. On 1 July, the house was allegedly attacked by a group of six men who threw rocks at it, breaking several windows and forcing Rakitić and his family to literally flee the island on a speedboat. However, Slobodna Dalmacija reporters investigated the event and discovered that only one window was broken by an unknown perpetrator, and that Rakitić rather calmly left the island hours later, giving autographs to the local fans. As Rakitić was born and raised in Switzerland, Rakitić also possesses Swiss citizenship, along with Croatian citizenship by descent, as such Rakitić possesses dual citizenship. Most notably, he represented Switzerland at the Under-17, Under-19 and Under-21 teams. In 2007, when he was 19, various people in Switzerland were outraged at his decision to represent Croatia in senior international football. Rakitić said in an interview with Swiss newspaper Le Temps, prior to the 2018 FIFA World Cup, that he was proud to play for Switzerland at youth level, as he grew up in Switzerland and that he knew where he came from. Rakitić also remarked in the same interview that he was in favour of representing Croatia in senior international football and was not against Switzerland, and initially called and informed the then-Swiss coach Köbi Kuhn of his decision to select Croatia, before contacting the then-Croatia boss Slaven Bilić. 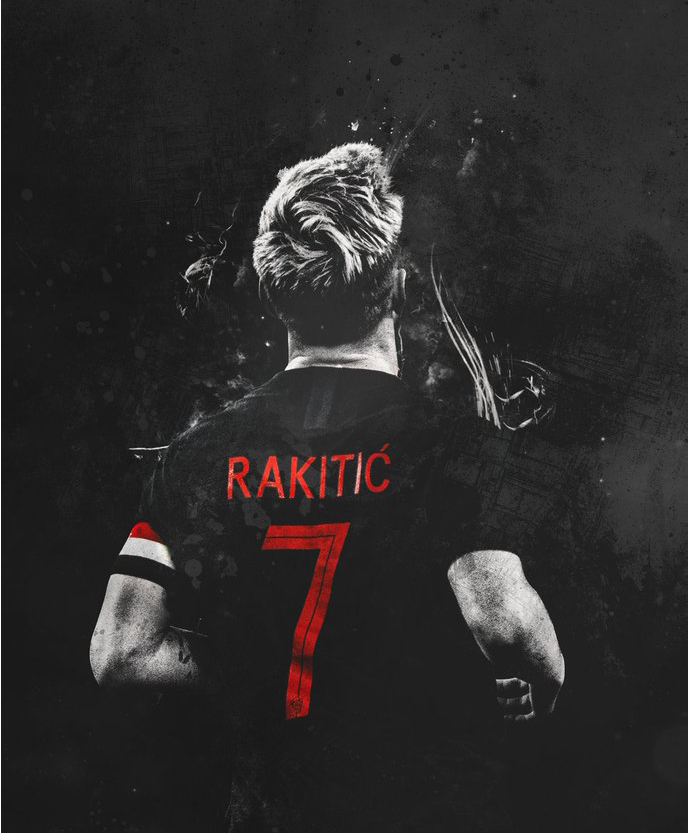 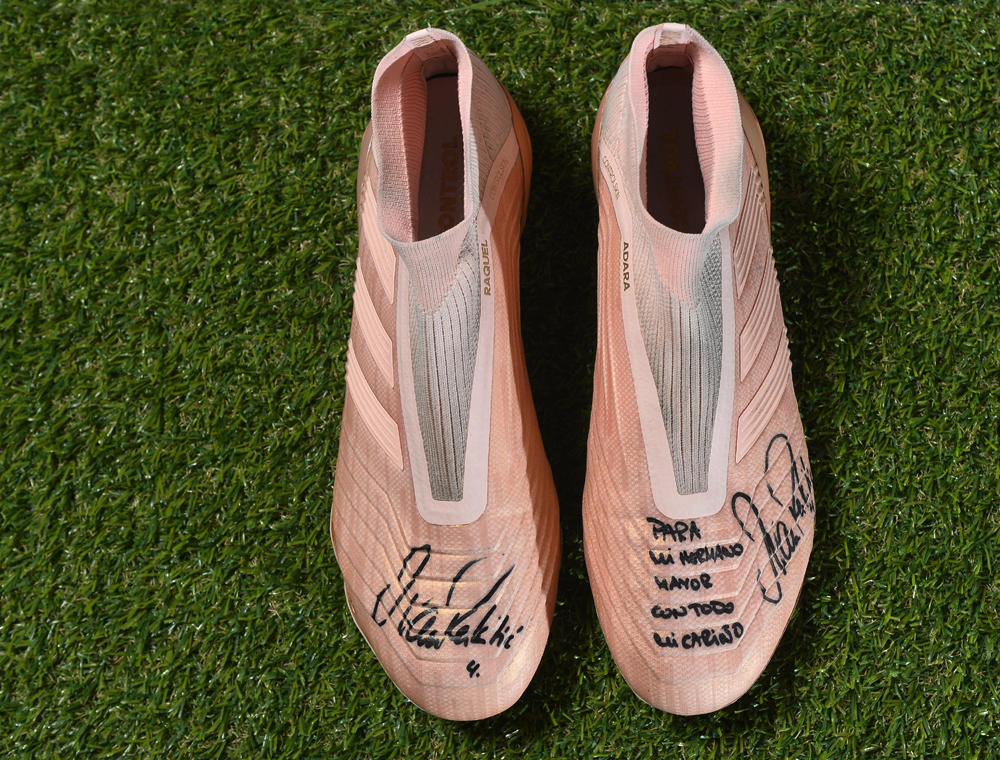 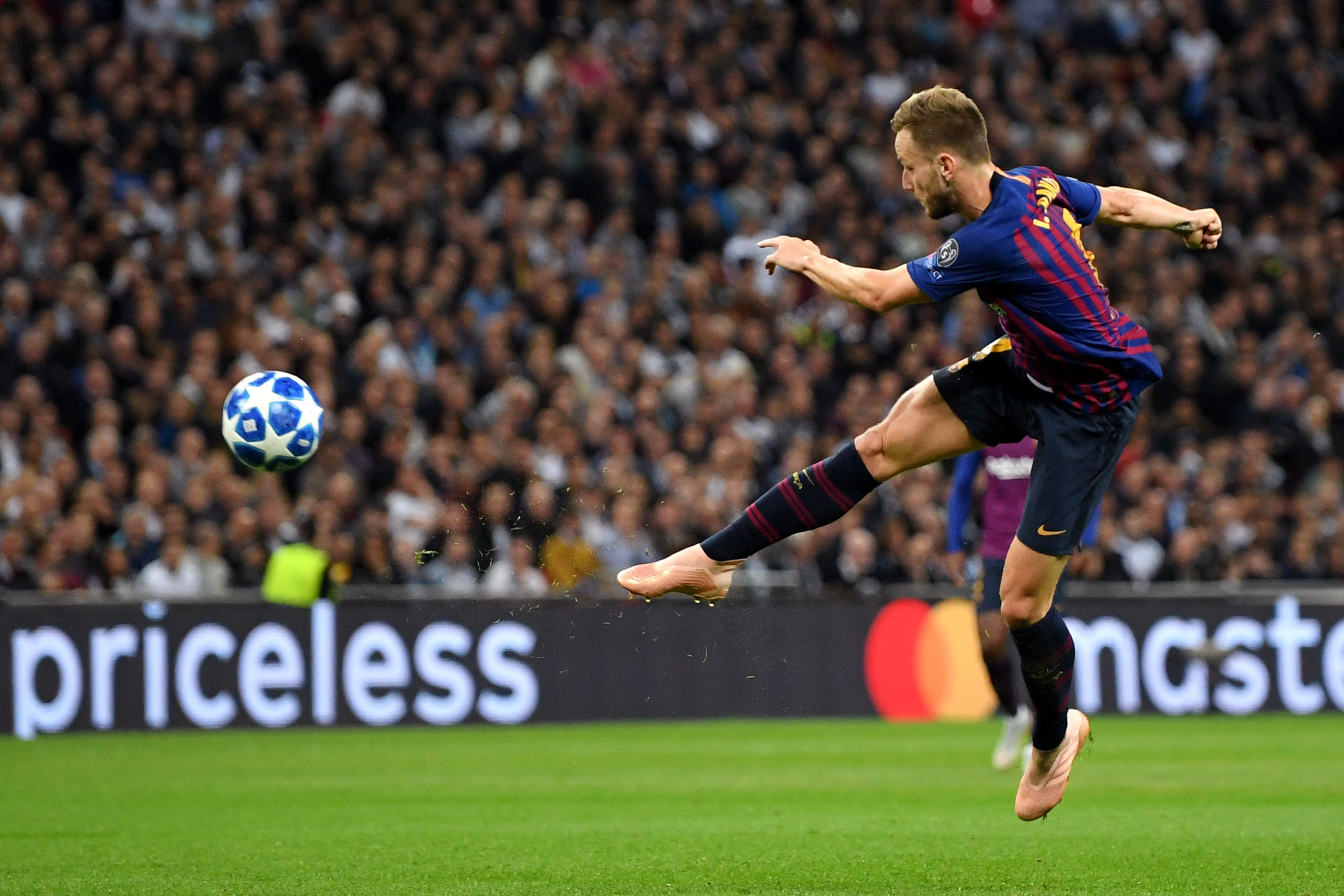 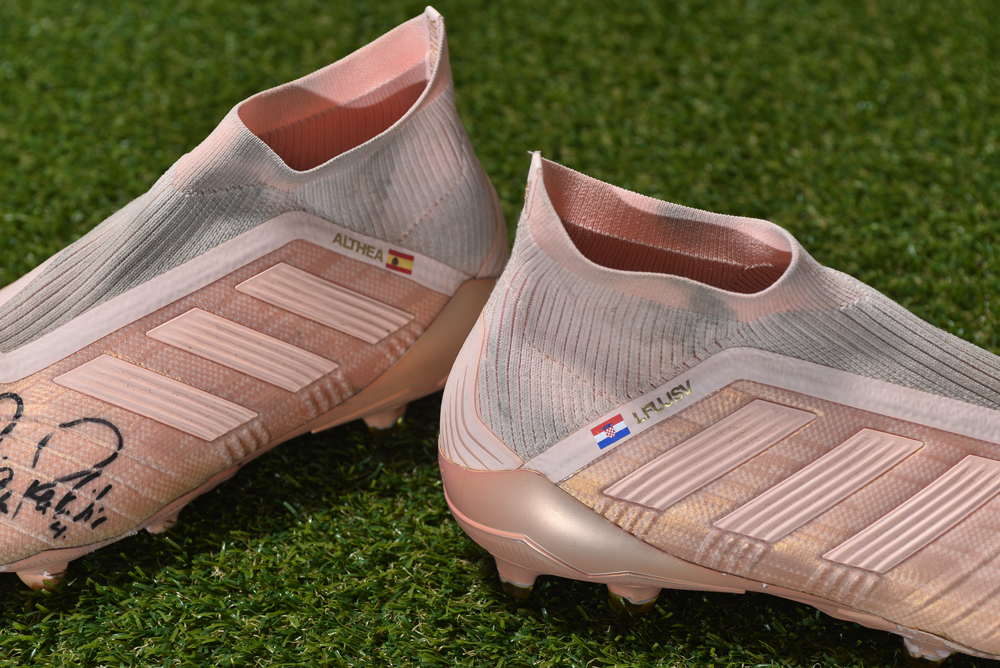 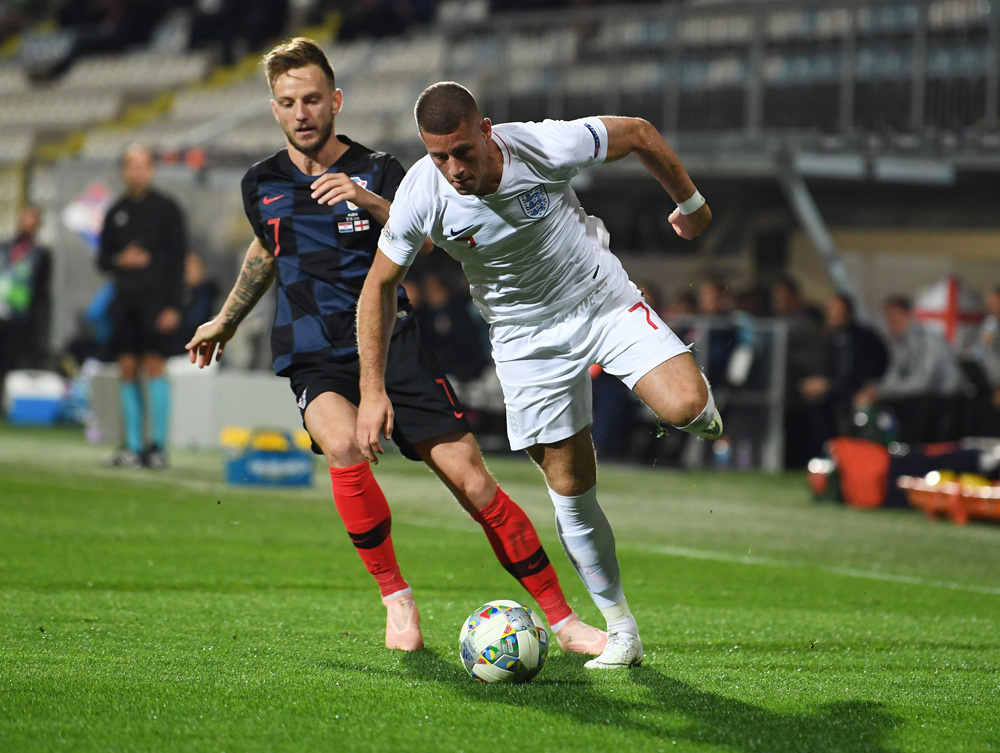 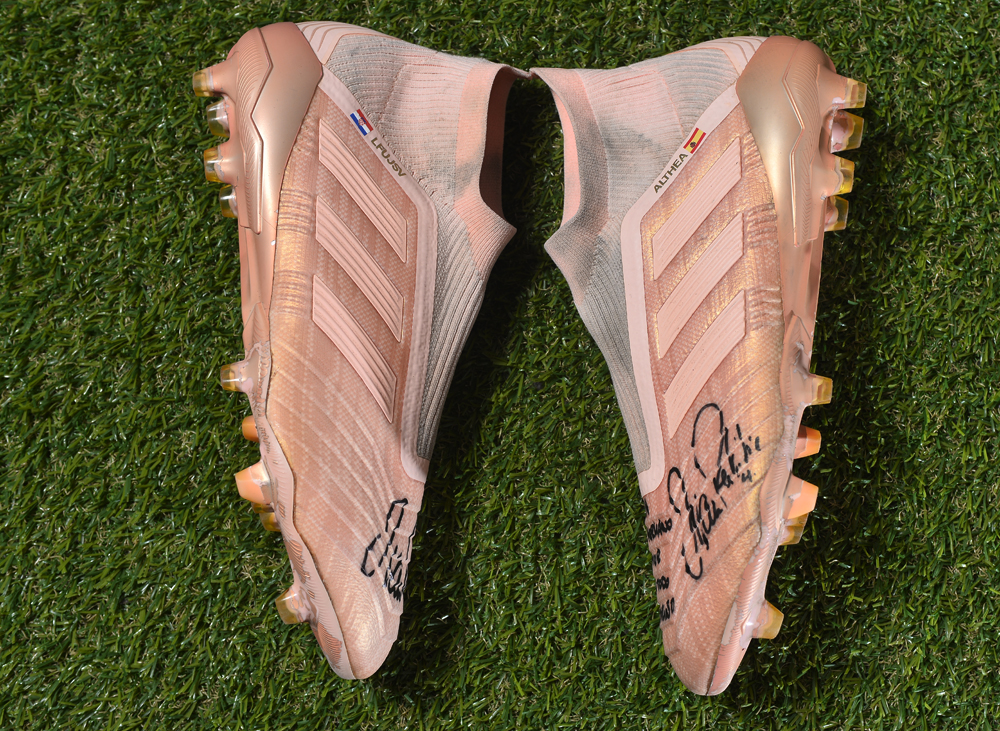 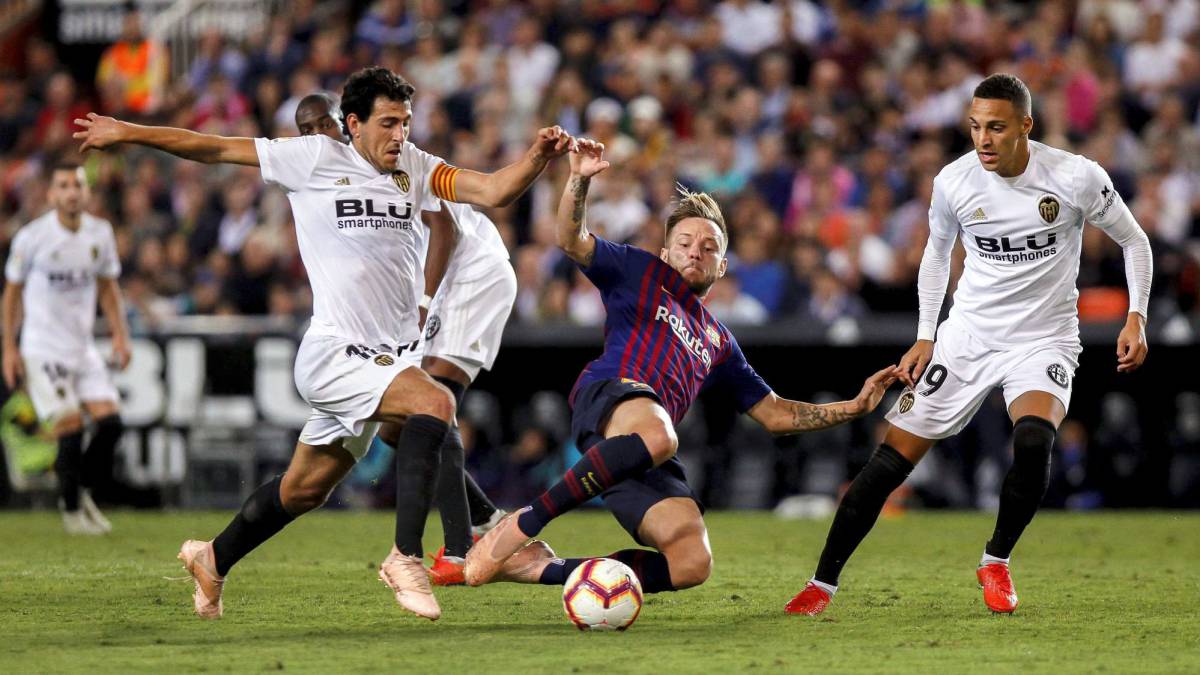 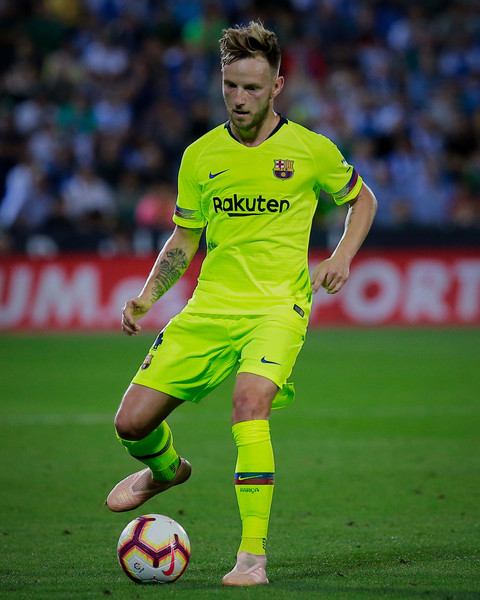 A talented and hard-working midfielder, Rakitić is known in the media as a well-rounded playmaker, with good stamina and defensive skills, as well as excellent technique, close control, vision, and passing, which enables him to dictate play in midfield and create chances for teammates after winning back possession, despite his lack of pace. As such, he is capable of both breaking down opposing plays and subsequently transitioning the ball forward to start attacks; he is also capable of scoring goals himself, courtesy of his striking ability from distance, as well as his ability to find and exploit spaces with his movement off the ball and make attacking runs into the box. A versatile player, he is capable of playing in several midfield positions, and has been deployed as a winger on either side of the pitch, as a central midfielder, as an attacking midfielder, as a defensive midfielder, in a box-to-box role, or even as a deep-lying playmaker. In 2019, in an interview with BeIN Sports, manager José Mourinho described Rakitić as “one of the most underrated players in the world.” He later added: “He is fantastic on all levels; he defends, he compensates for [Lionel] Messi, he runs and he’s sensible with the ball at his feet.” 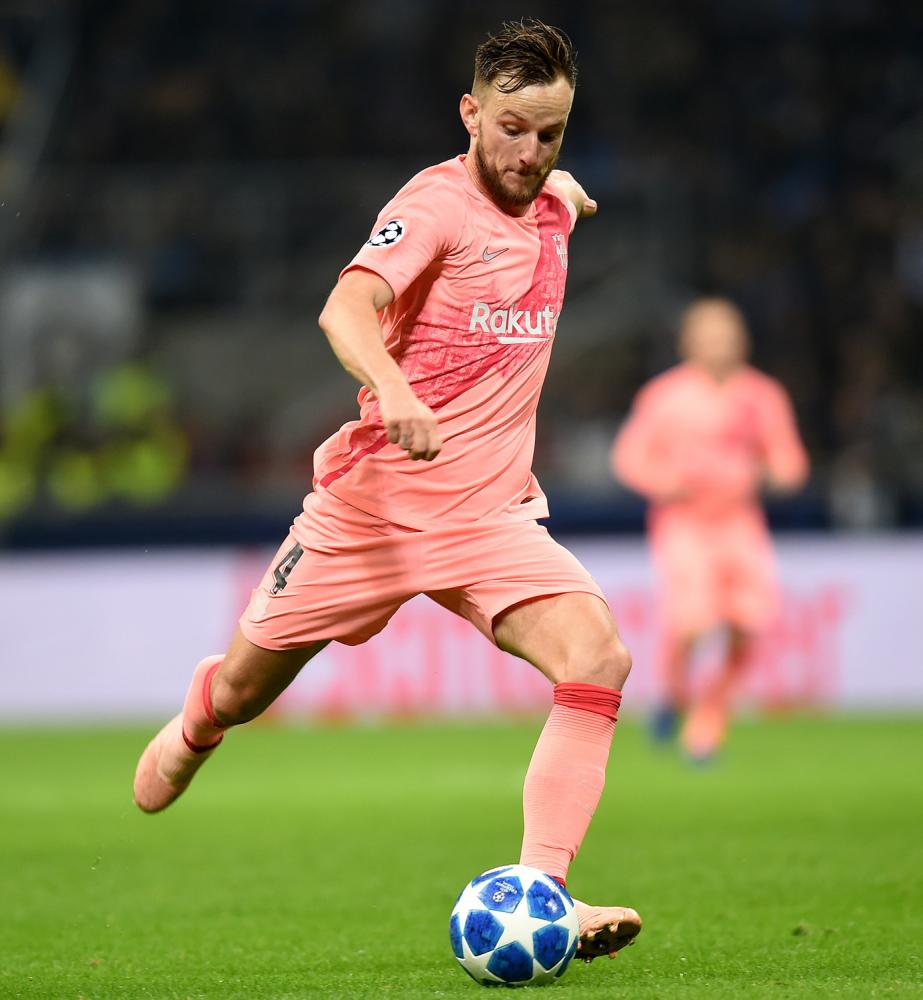 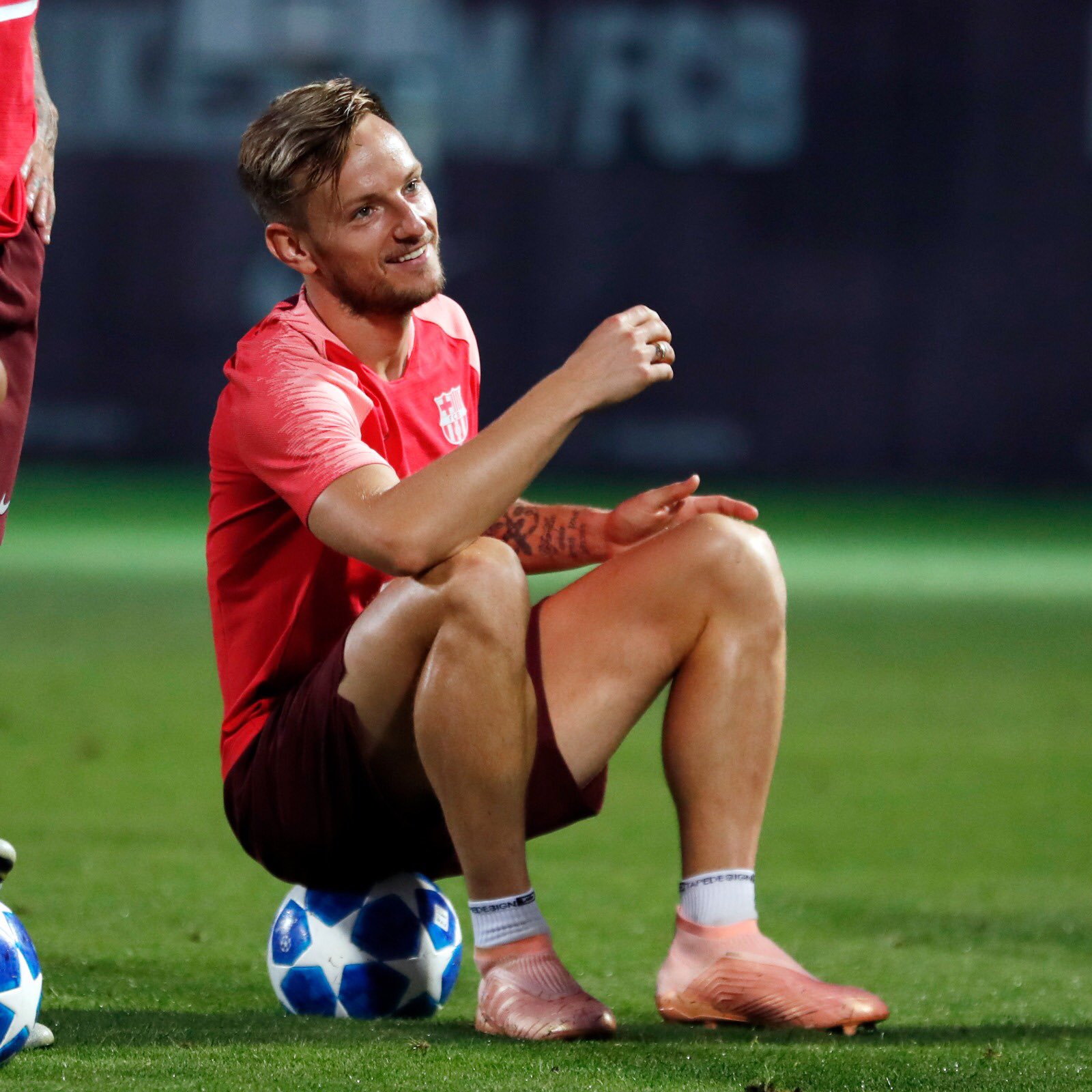 Rakitić’s first international experience came at youth level with the Switzerland under-17, under-19 and under-21 national teams, but decided to accept the call-up by Croatia national team coach Slaven Bilić and play for the nation’s senior team. He made his full international debut for Croatia on 8 September 2007 in their UEFA Euro 2008 qualifier against Estonia in Zagreb, highly praised by the fans as he was entering the game as a substitute. In Croatia’s following qualifier, a 0–6 away win over Andorra on 12 September 2007, he scored his first international goal for Croatia in only his second appearance for the team. He finished the year 2007 with five senior international caps to his name, four of which were in the successful Euro 2008 qualifying campaign. 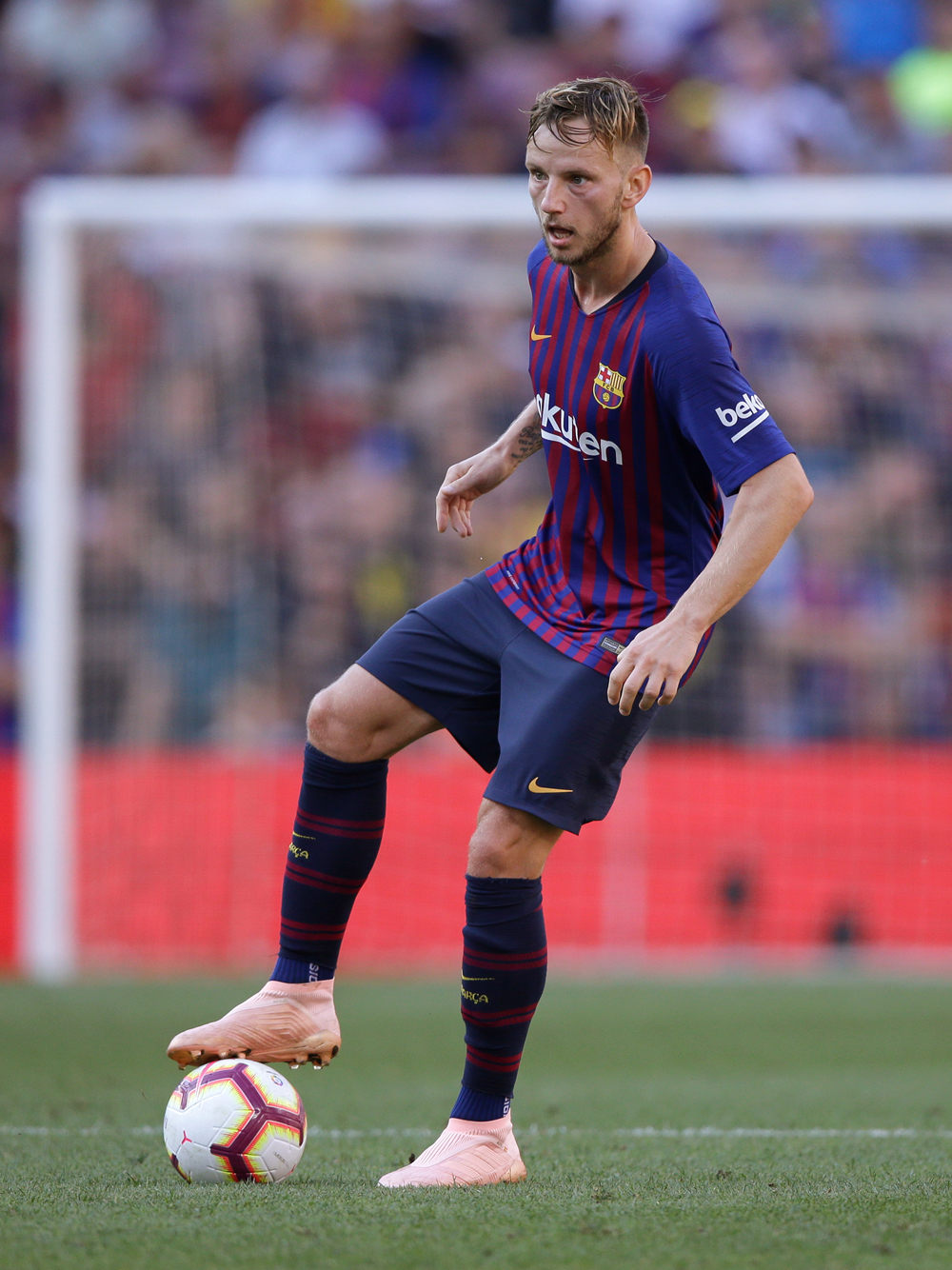 Grosso Grosso2021-08-30T05:12:13+00:00
Page load link
This site uses cookie technology, including third parties' ones. If you want to know more click here. If you access any element of this site outside this banner, you consent to the use of cookies. Ok
Go to Top