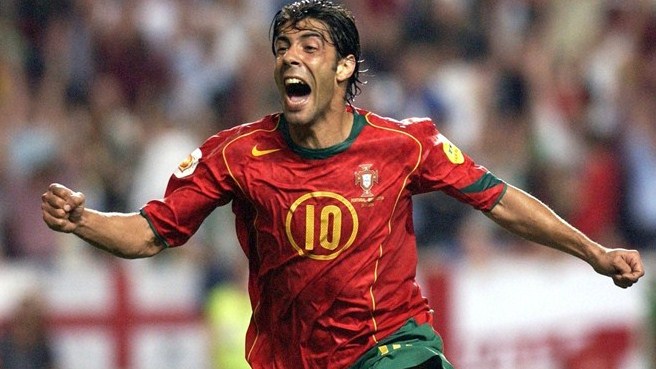 Rui Manuel César Costa is a former Portuguese professional footballer. Regarded by pundits as one of the greatest players of his generation, Costa usually played as an attacking midfielder, and was known in particular for his excellent technique, playmaking ability, and eye for goal from midfield. In 2004, he was named by Pelé in the FIFA 100, as one of the 125 greatest living football players. Nicknamed “The Maestro”, Costa spent the majority of his career with Benfica in Portugal and Fiorentina and A.C. Milan in Italy. In a top-flight career spanning 17 years, he won several trophies, including one Primeira Liga title, one Taça de Portugal, one Serie A title, three Coppa Italia, one UEFA Champions League title and one UEFA Super Cup. A Portuguese international, Costa amassed 94 caps and scored 26 goals for A Selecção and represented the country in three UEFA European Championships and one FIFA World Cup. 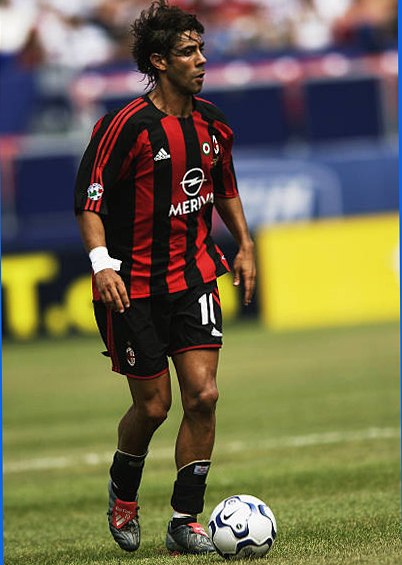 The 2003 Supercoppa Italiana was a match contested by Juventus, the 2002–03 Serie A winner, and Milan, the 2002–03 Coppa Italia winner. It was the sixth appearance for Juventus (3 victories in 1995, 1997 and 2002) and the seventh for Milan (victories in 1988, 1992, 1993, 1994). The match was played in East Rutherford, New Jersey in the United States, the home pitch of the Major League Soccer club New York/New Jersey MetroStars (now New York Red Bulls), with a heavily Italian heritage in the region. Juventus beat Milan on penalties, three months after losing to the same opposition in a shootout in the 2003 UEFA Champions League Final. This game was the only with the “Coppa Italia” badge on chest left side very close to the team’s logo. Apparently the management didn’t like the position of this badge so for the rest of season the badge was used in the middle central chest. 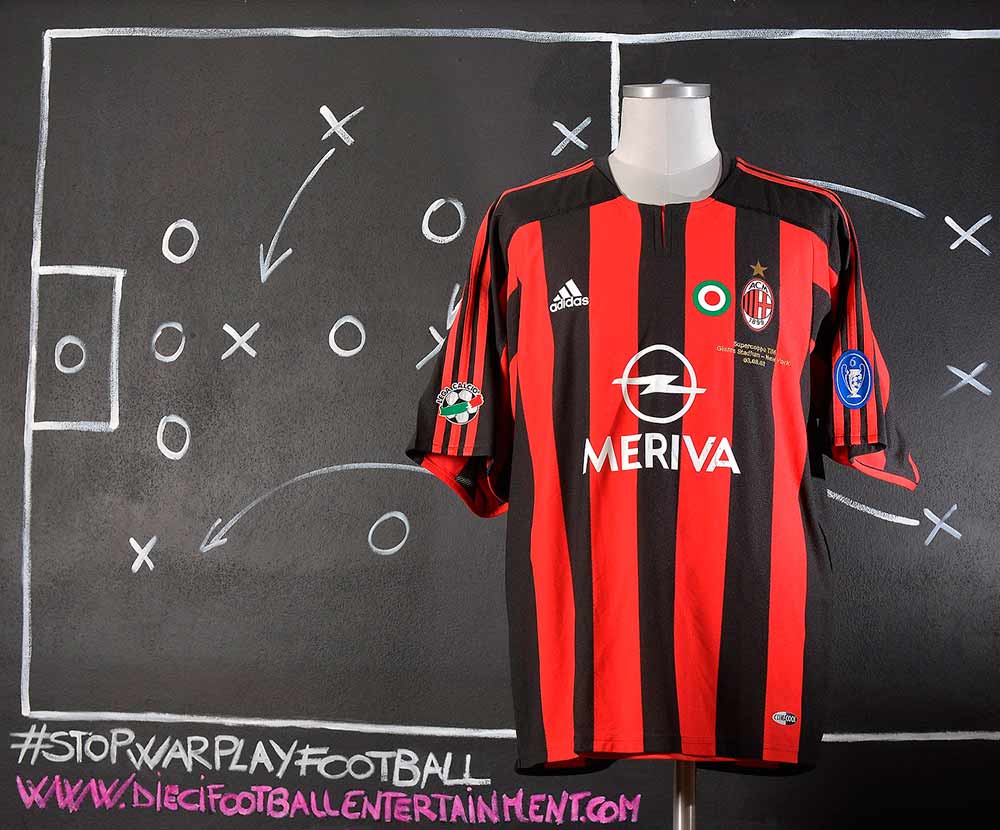 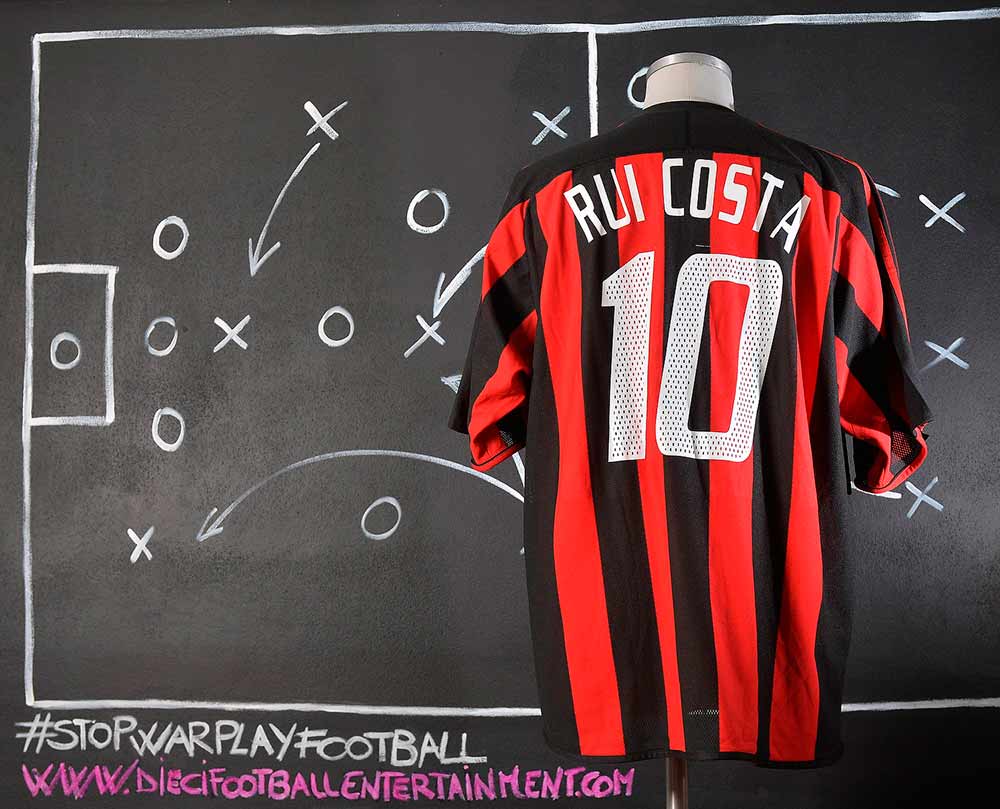 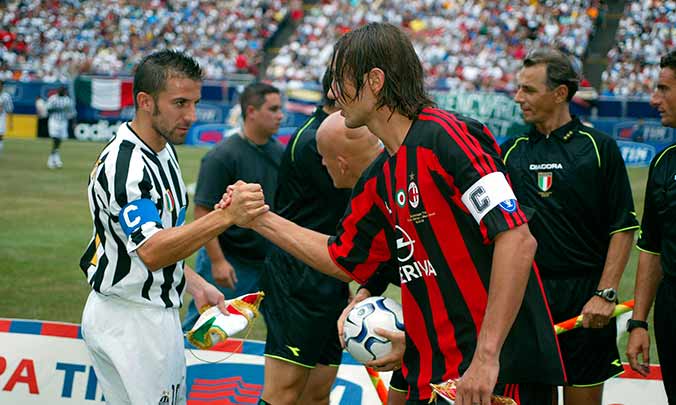 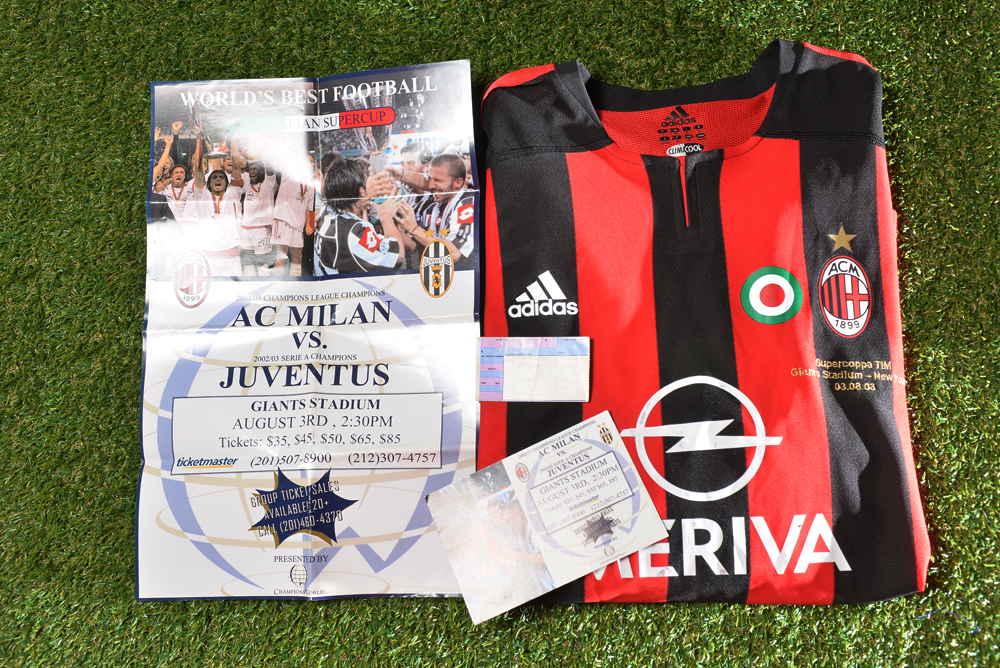 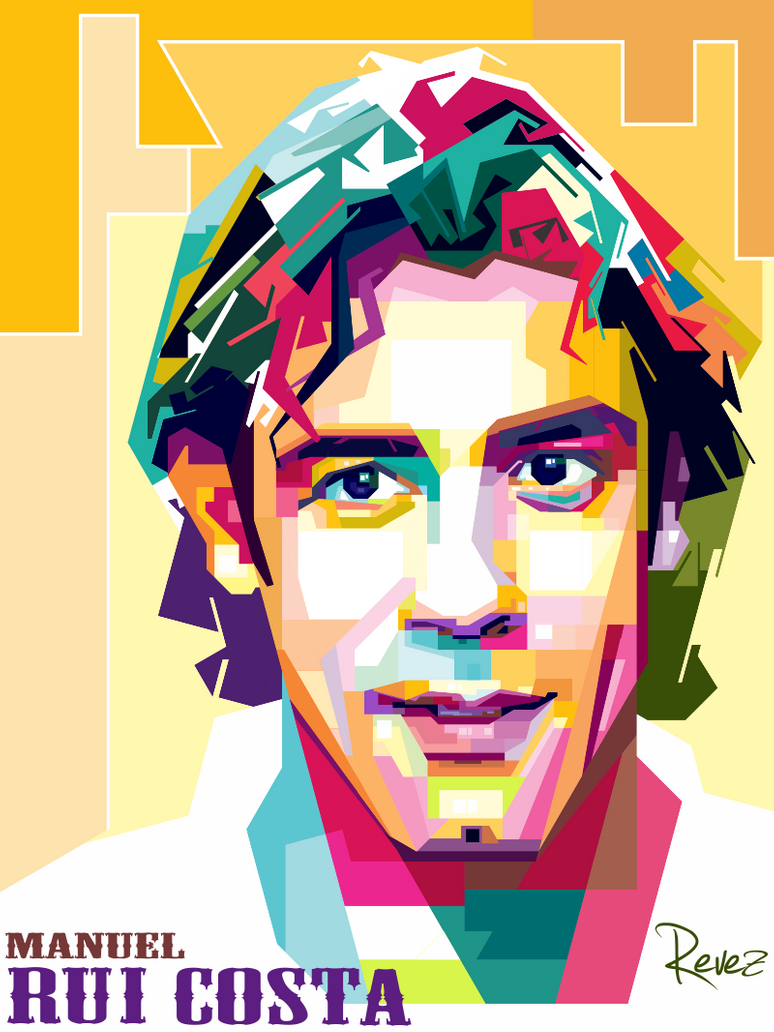 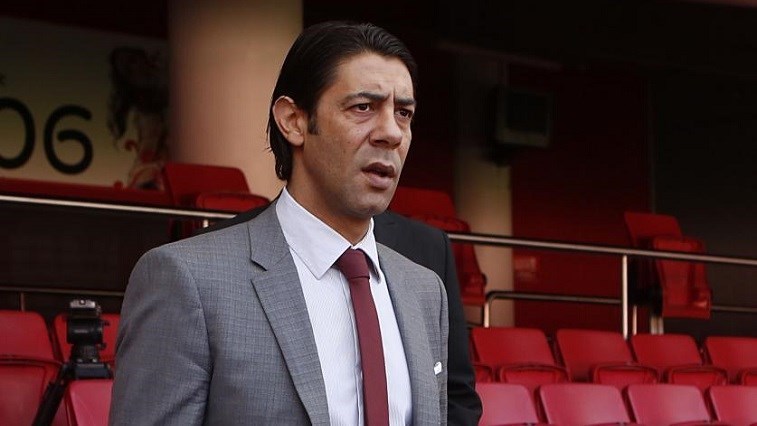 Considered one of the greatest midfielders of his generation, Costa was a classic number 10, who usually played in a creative role as an attacking midfielder behind the strikers, but was also capable of playing as a deep-lying playmaker, as a second striker, or as a winger. A quick, intelligent, and hard-working player, throughout his career, he was renowned for his fine technique, dribbling skills, movement, great vision, and precise passing, which made him an excellent assist provider, and enabled him to create space for his teammates, or orchestrate his teams’ attacking moves. Although he was mainly known to be an unselfish team player, he also possessed an eye for goal from midfield, and was an accurate striker of the ball with both feet, in particular from outside the area. He was also an accurate free kick and penalty taker. Rui Costa was sponsored by American sportswear company Nike and appeared in Nike commercials. In 1996, he starred in a Nike commercial titled “Good vs Evil” in a gladiatorial game set in a Roman amphitheatre. Appearing alongside football players from around the world, including Ronaldo, Paolo Maldini, Eric Cantona, Luís Figo and Patrick Kluivert, they defend “the beautiful game” against a team of demonic warriors, before it culminates with Cantona striking the ball and destroying evil. Rui Costa features in EA Sports’ FIFA football video game series; he was included in the Ultimate Team Legends in FIFA 16. On the following day after his final professional game, Costa was presented as director of football at Benfica, hiring Quique Sánchez Flores as head coach and being responsible for the formation of the team in the next season. During the summer 2008 transfer window, Costa was able – already as director of football – to sign a few well-known players, such as Argentine playmaker Pablo Aimar and bringing in Spanish winger José Antonio Reyes and Honduran striker David Suazo in on loan, thus gaining general praise from both board and fans alike. On the following Summer, Costa further increased his efforts to build a more strengthened Benfica team following a disappointing league campaign in the previous season. He would make several high-profile signings such as Argentine striker Javier Saviola, Brazilian attacking midfielder Ramires and Spanish defensive midfielder Javi García, along with experienced Portuguese manager Jorge Jesus. His major signings would prove to be successful as Benfica would win the Primeira Liga in the 2009–10 season for the first time in five years. Benfica would also win the Taça da Liga in the same season defeating Porto in the final.

Watch above the Nike commercial “Good vs Evil” 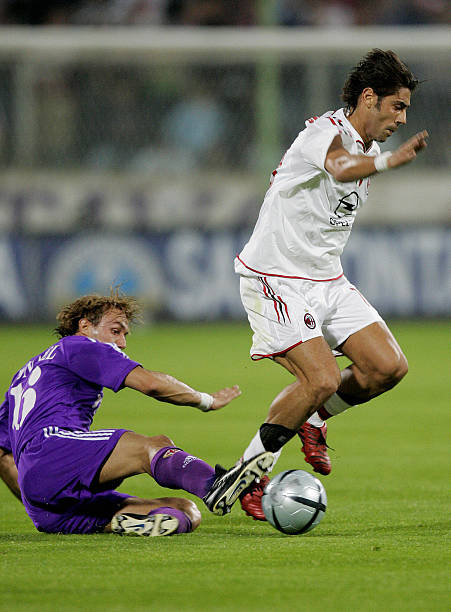 This shirt was worn by Manuel Rui Costa during the Serie A game between Lecce and Milan which took place in Lecce, “Ettore Giardiniero – Via del Mare” Stadium, on May 15th 2005. Milan draw 2-2 and Rui Costa swapped his shirt after the match with a Lecce’s player whom we got it from. Rui Costa joined A.C.Milan in the summer of 2001 when he followed Fatih Terim the coach of Fiorentina that became new Milan’s manager. When Terim left Fiorentina for Milan, he took Costa with him, paying an 85 billion lire (€43,898,836) for the player. In so doing, Costa became Milan’s most expensive transfer of all-time. He played five seasons in Milan, where he won one Serie A title, one Coppa Italia, one Italian Super Cup, one UEFA Champions League and one UEFA Super Cup. He played less frequently following the arrival of Brazilian youngster Kaká in 2003. 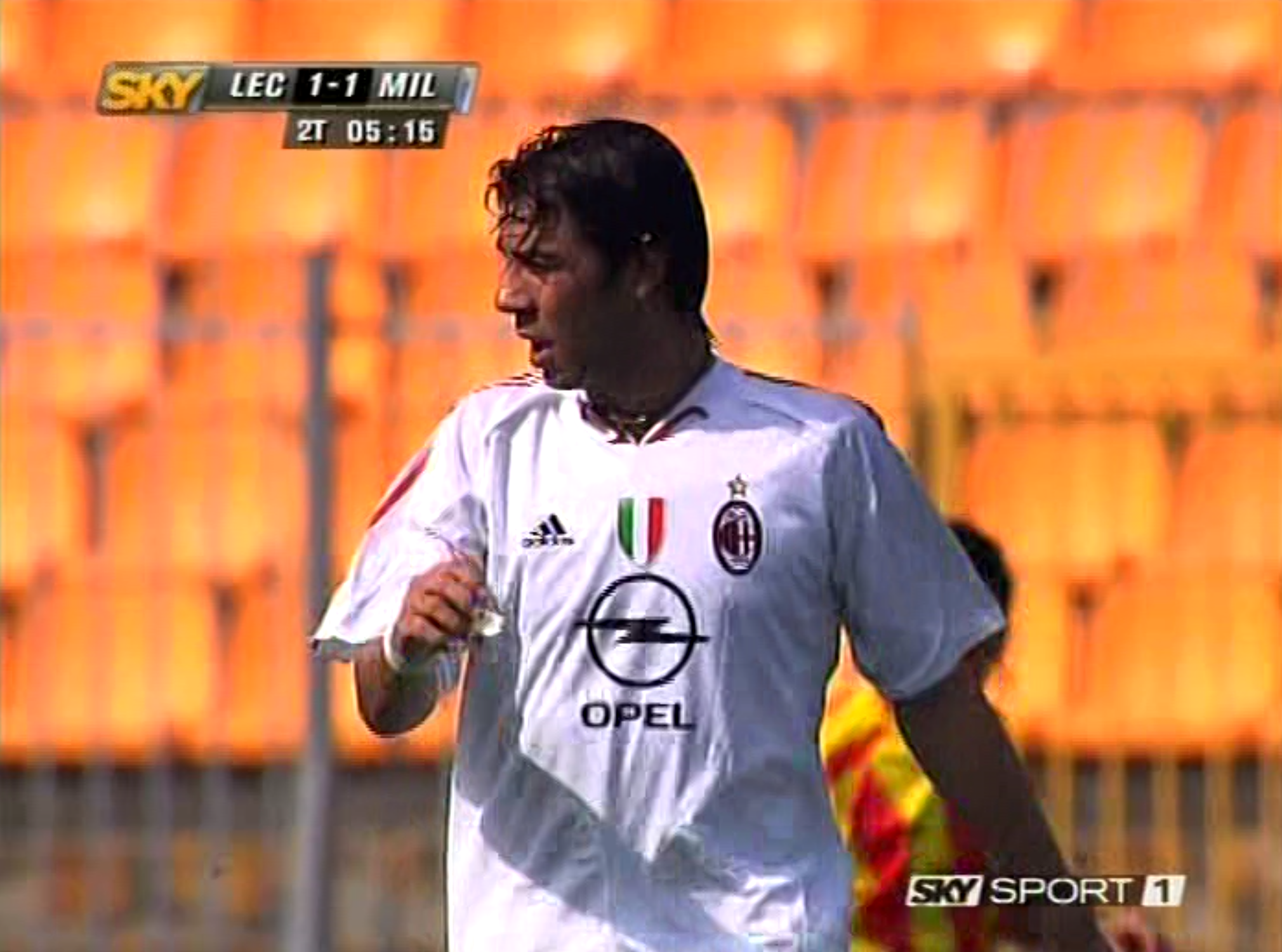 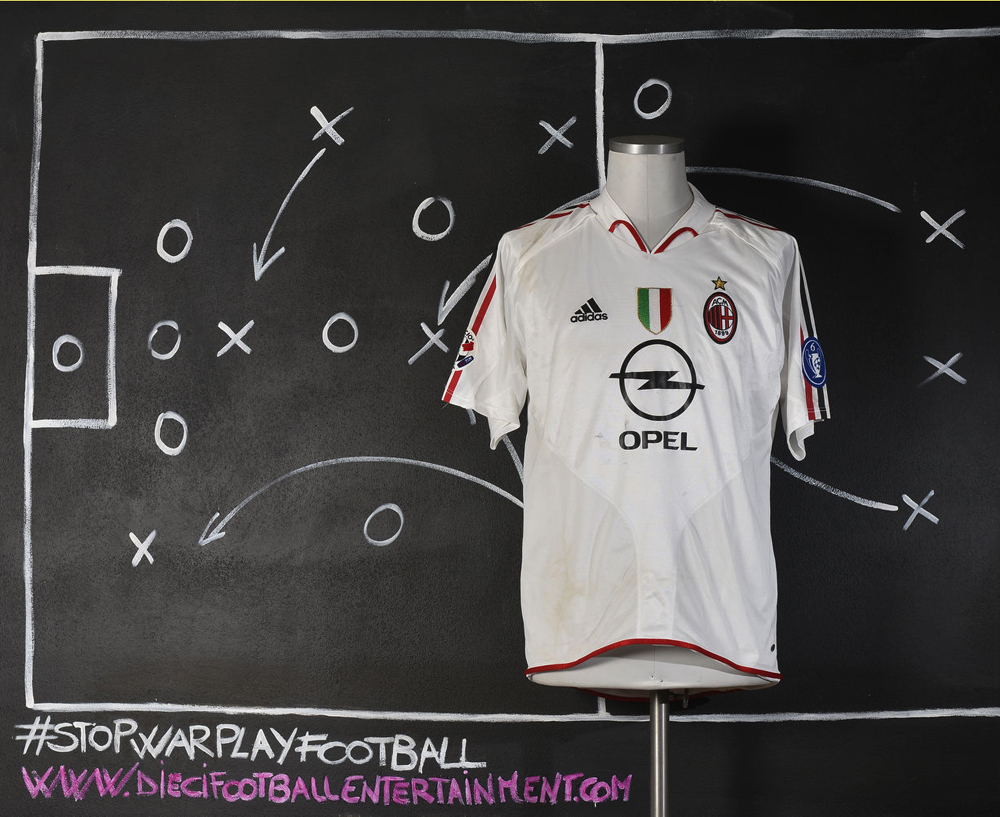 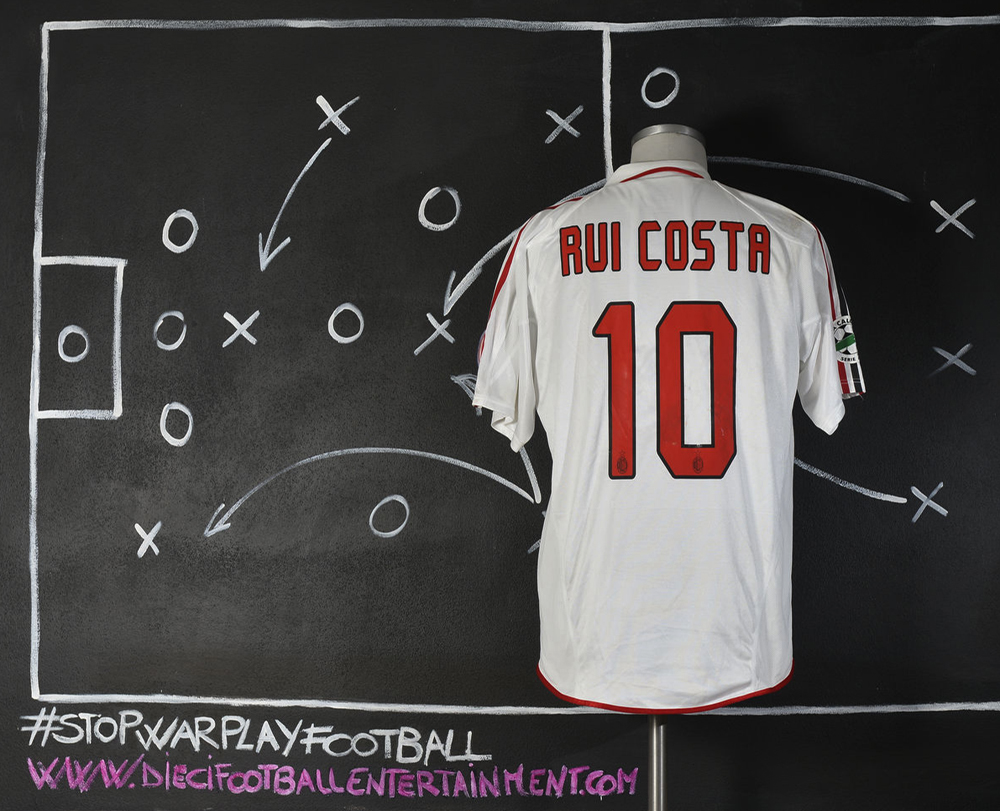 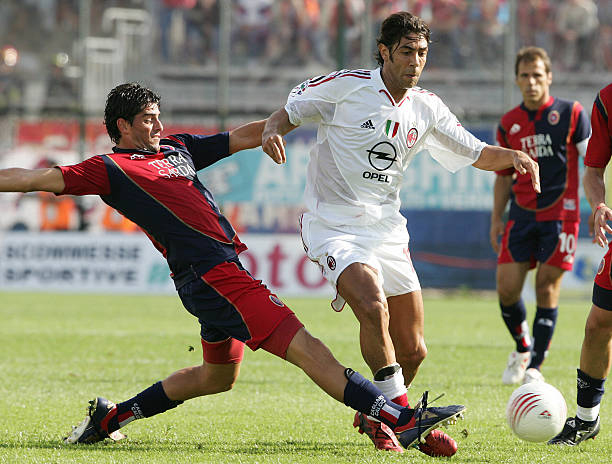 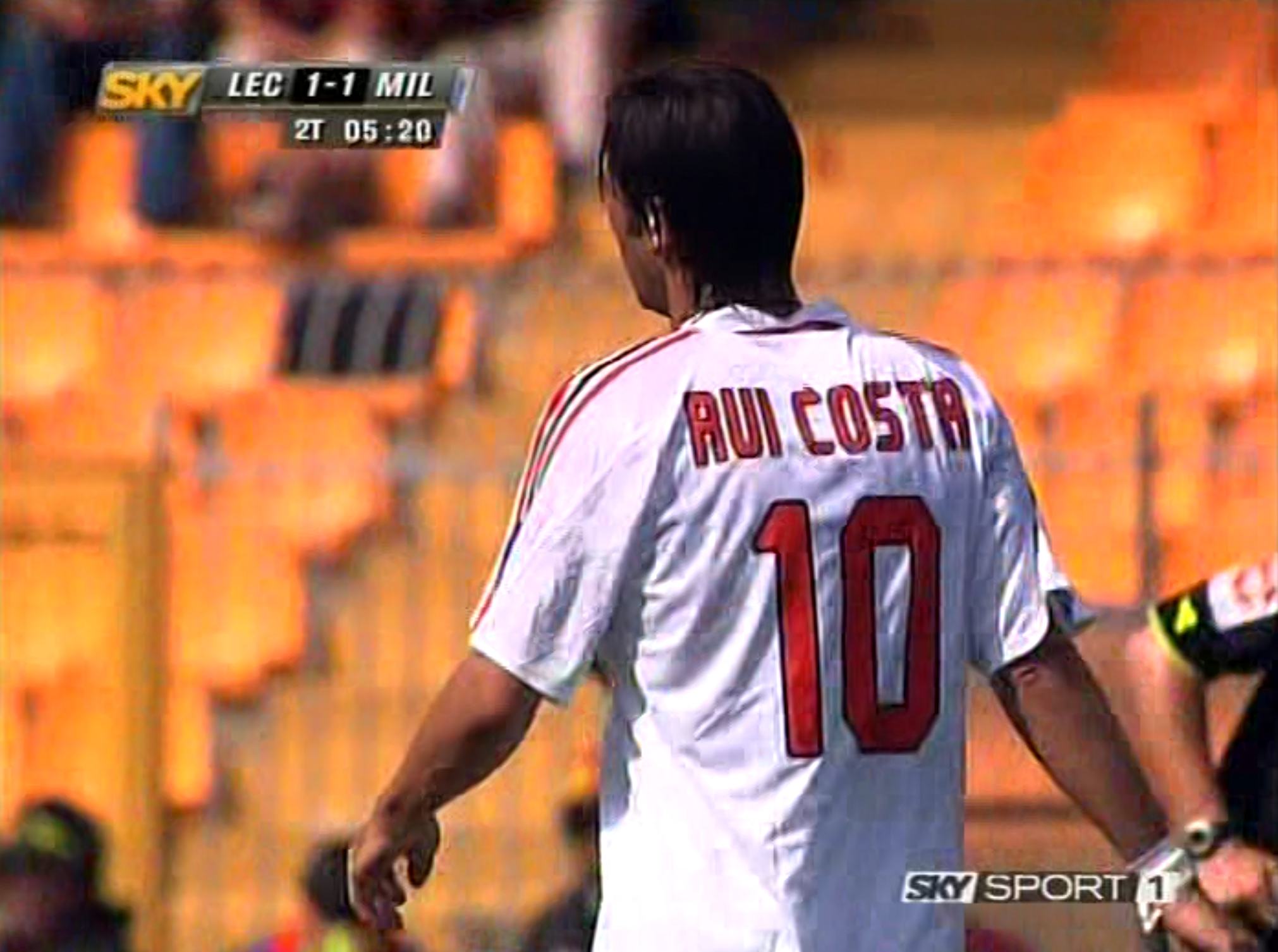 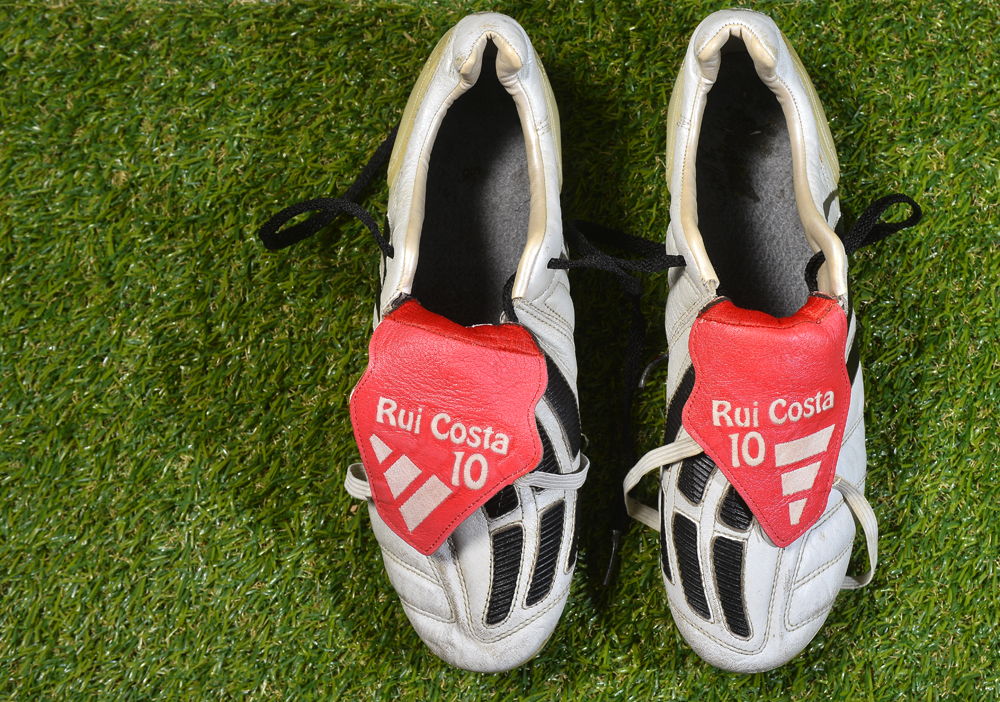 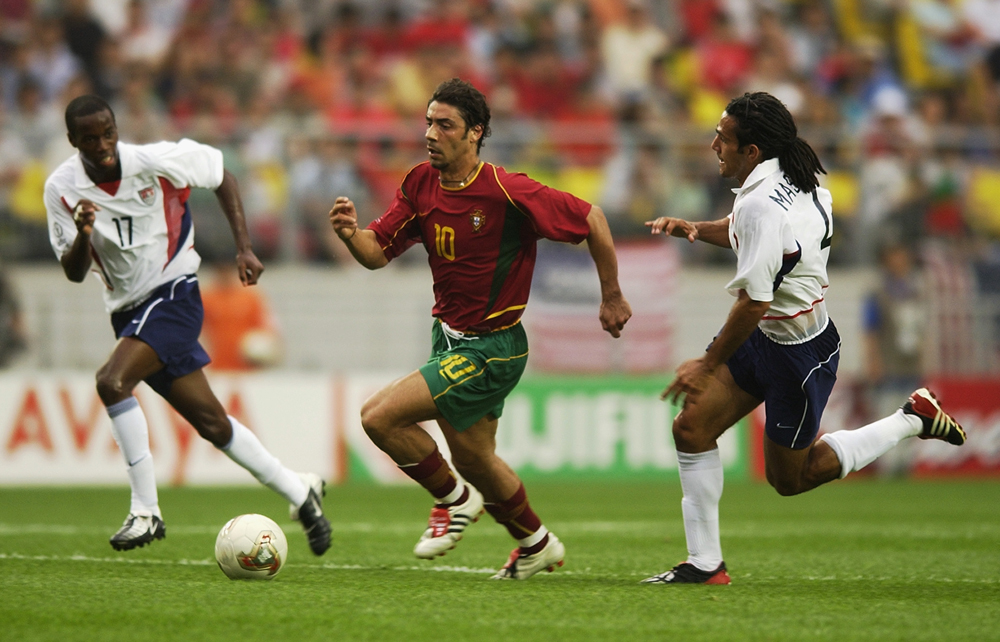 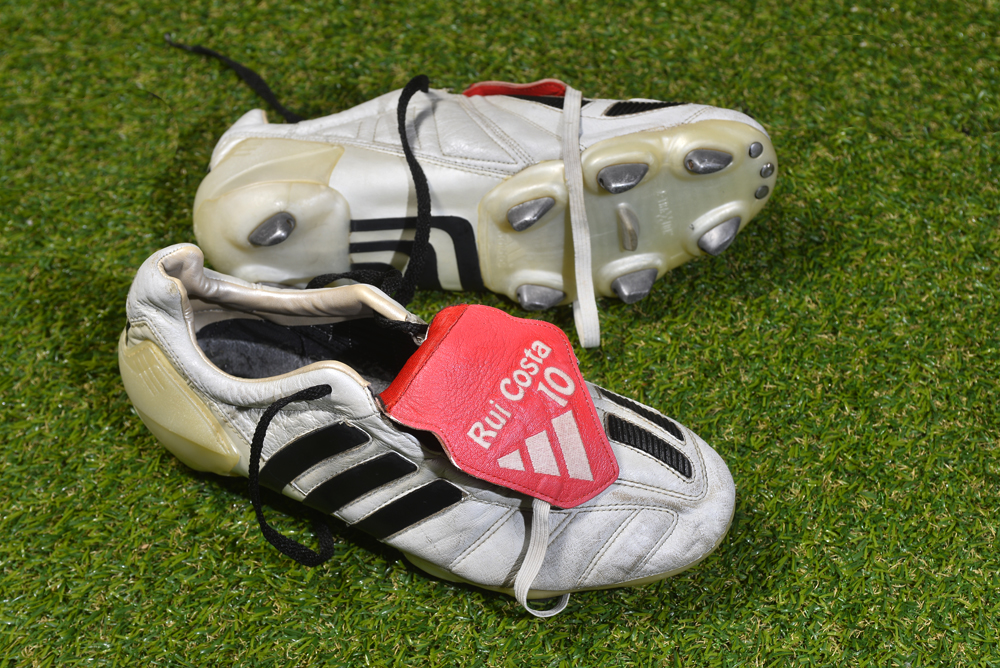 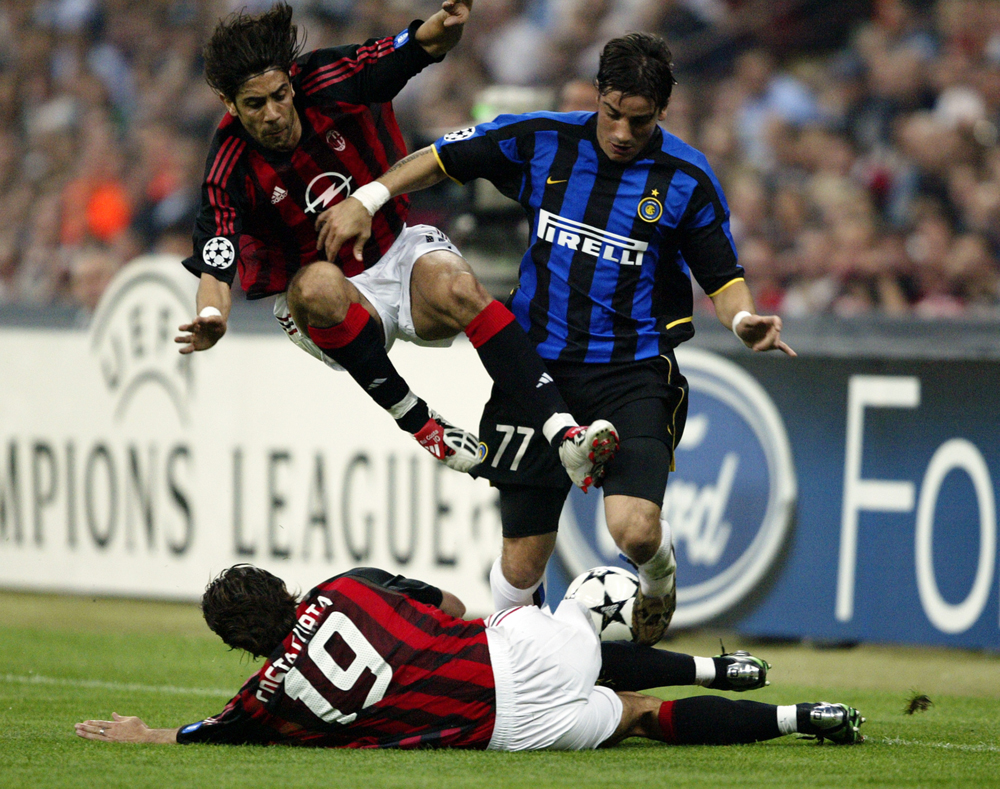 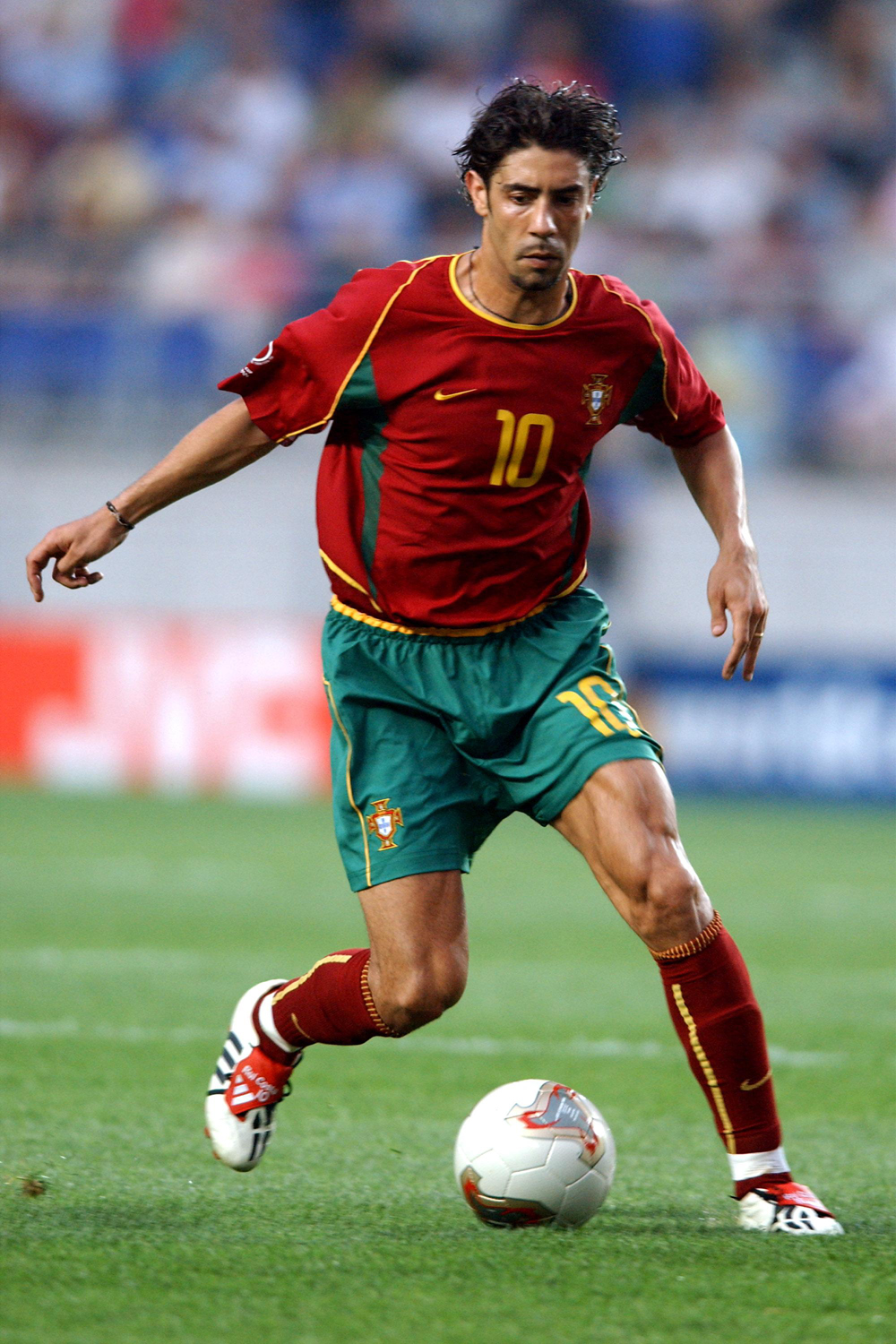 In the summer of 1991, Costa’s displays at Fafe had impressed Portugal Under-21 coach Carlos Queiroz so much that he was called up to the team to represent Portugal in the World Youth Cup. The Portuguese under-20 national team won a World Youth Championship in 1991. His clinching penalty kick against Brazil in the final helped win the title on home soil and announced Costa as one of the brightest members of what would become known as the “Golden Generation.” Costa was a member of Portugal’s most consistent years at senior level as the team reached the quarter-finals of UEFA Euro 1996, the semi-finals of Euro 2000 and the final of UEFA Euro 2004. Costa was especially instrumental in helping Portugal reach the 2004 final on home soil, scoring a screamer of a goal at the Estádio da Luz against England in the quarter-final match, and the sight of a distraught Costa at the end of a 1–0 defeat to Greece was one of the enduring images of the tournament. Costa also took part in the 2002 FIFA World Cup in Japan and South Korea, scoring Portugal’s winning goal in their 4–0 win over Poland. The only time in his career that Costa was sent off was in an international game against Germany. Despite being principally a provider, Costa scored 26 goals in 94 games; he is Portugal’s eighth-highest appearance maker and seventh-highest goalscorer. 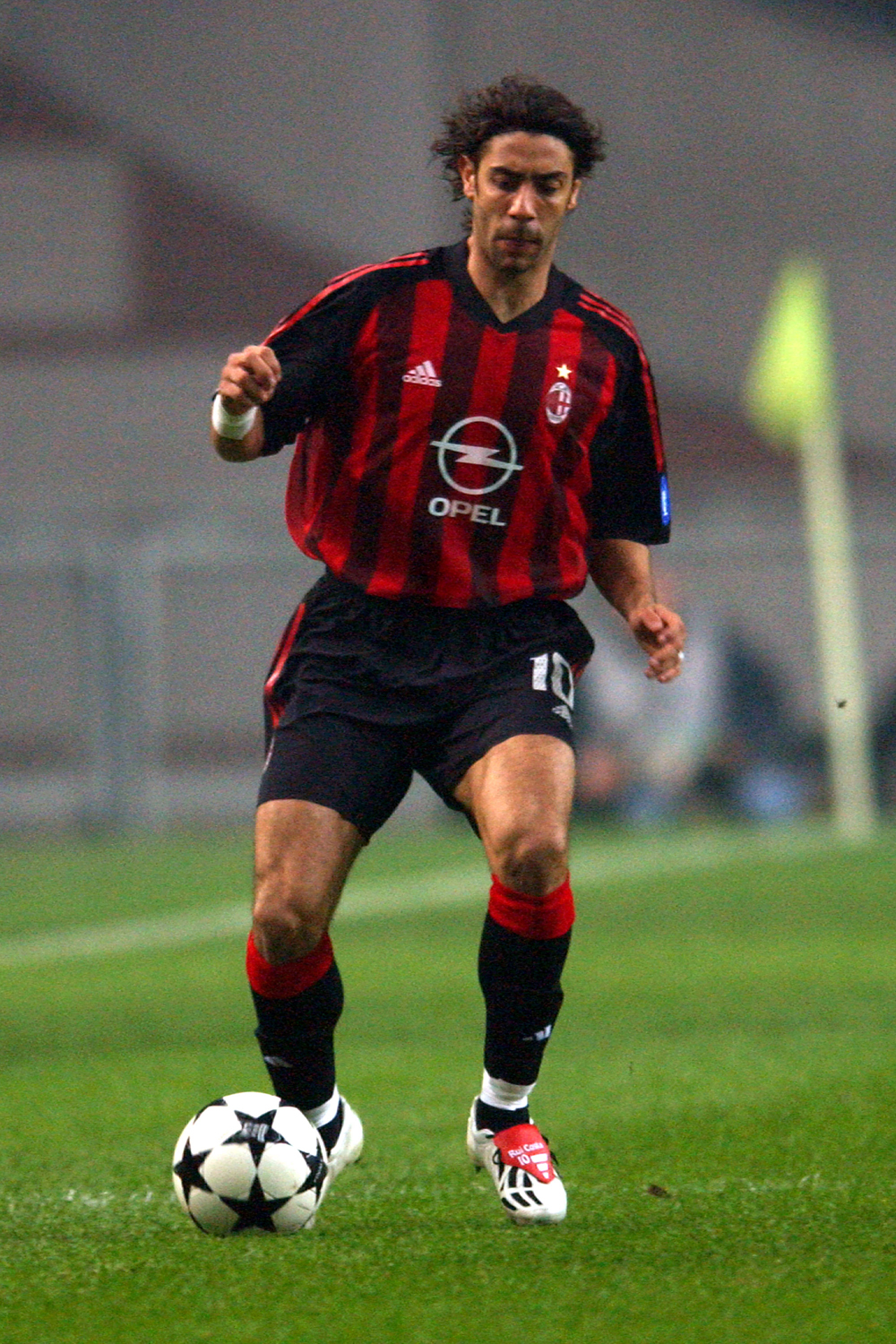 Grosso Grosso2022-09-18T17:18:31+00:00
Page load link
This site uses cookie technology, including third parties' ones. If you want to know more click here. If you access any element of this site outside this banner, you consent to the use of cookies. Ok