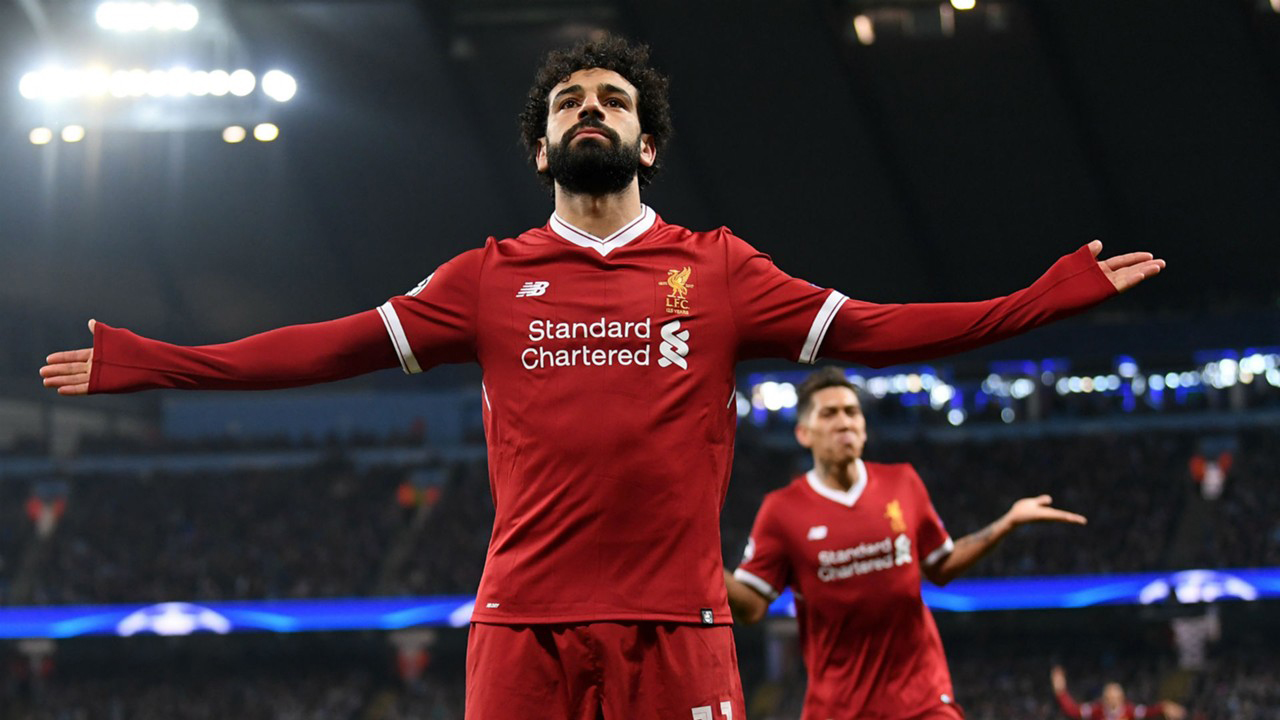 Mohamed Salah Ghaly is an Egyptian professional footballer who plays as a forward for the Egyptian national team. Salah started his senior career with hometown club El Mokawloon in the Egyptian Premier League in 2010, departing shortly thereafter to join Basel for an undisclosed fee. In Switzerland, he starred as he won the league title in his debut season, winning the SAFP Golden Player Award in the process. Salah’s performances then attracted Premier League side Chelsea, and he joined the club for a £11 million fee in 2014. However, he was used sparingly in his debut season, and was allowed to leave on loan to Serie A clubs Fiorentina and Roma, with the latter eventually signing him permanently for €15 million. Following consistent match-winning performances in Rome to lead them to second-placed finish and a record points-tally in 2017, Salah relocated back to the Premier League to sign for Liverpool for a then club-record fee of £36.9 million. During his second spell in England, Salah adapted his game from a natural winger to a complete forward, and quickly became the focal point of the team. He would go on to break the club’s scoring record for a debut season, receiving the Premier League Golden Boot after registering a record 32 goals in 36 league games. He also became the first player to win three Premier League Player of the Month awards in the same season. His record breaking performances saw him receive a number of other accolades at the end of the 2017–18 season, including the PFA Players’ Player of the Year, the Football Writers’ Player of the Year, and the PFA Fans’ Player of the Year awards. He was also named in the 2017–18 PFA Team of the Year. At international level, Salah represented Egypt at youth level, winning a bronze medal in the Africa U-20 Cup of Nations, and participated in the 2011 FIFA U-20 World Cup and the 2012 Summer Olympics. He was awarded the CAF Most Promising African Talent of the Year in 2012. Making his debut with the senior national team in 2011, he helped Egypt reach the final of the 2017 Africa Cup of Nations, and he became the top scorer during CAF qualification to help the team qualify for the 2018 FIFA World Cup. For his performances, Salah was named CAF African Footballer of the Year and the BBC African Footballer of the Year He was also selected in the CAF Team of the Year and Africa Cup of Nations Team of the Tournament. 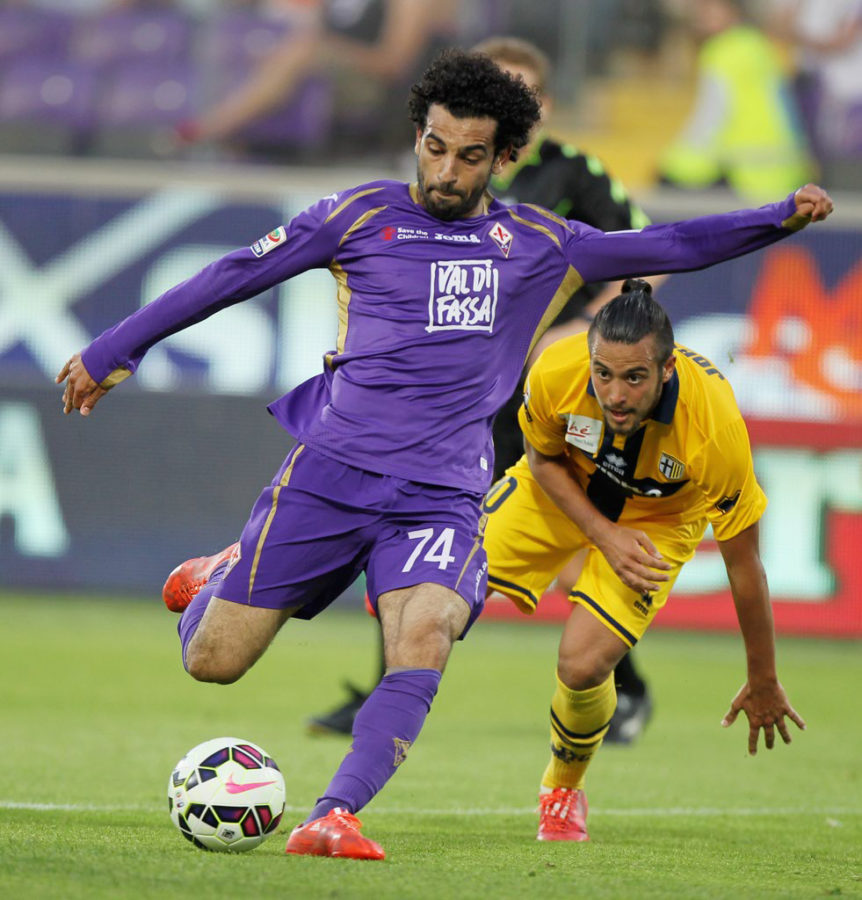 On transfer deadline, 2 February 2015, Chelsea confirmed that Salah would play for the Italian club Fiorentina on an 18-month loan until the end of the 2015–16 season, as part of a transfer deal which saw Juan Cuadrado moving in the opposite direction. Salah chose the number 74 shirt in honor of the victims of the Port Said Stadium riot. At the end of the season, Fiorentina reportedly activated an option to make the loan move permanent, but Salah refused the move. Even though the loan agreement was for 18 months, Salah refused to return to Fiorentina and instead joined fellow Serie A club Roma. A quick, mobile, hard-working and tactical player, with good technique and an eye for goal, Salah is predominantly known for his speed, dribbling skills, first touch, and ball control, as well as his ability to use both his pace and flair on the ball in order to beat opponents, and create scoring opportunities for himself or his teammates. A versatile forward, he primarily plays as a winger on the right flank, a position which allows him to cut into the centre onto his stronger left foot, and either shoot on goal or play quick exchanges with other players; he can also play in the centre behind the main striker as either an attacking midfielder or second striker. On his increased threat in front of goal since joining Liverpool, Salah credits Liverpool manager Jürgen Klopp’s request for him to occupy more central positions, with the forward telling ESPN, “I play closer to the goal than any club before.” Upon signing for Chelsea, José Mourinho said of Salah: “He’s young, he’s fast, he’s creative, he’s enthusiastic. When we analysed him he looks the kind of humble personality on the pitch, ready to work for the team.” Mourinho went on to say that Salah has “similar qualities” with “talented players” that he had worked with, such as Gareth Bale and Arjen Robben. His technical skills, pace, position and direct playing style led him to be nicknamed the “Egyptian Messi”, in the Italian media. Brazilian World Cup winner Ronaldo stated, “Salah is an incredible player with a tremendous quality. He looks like Messi.” 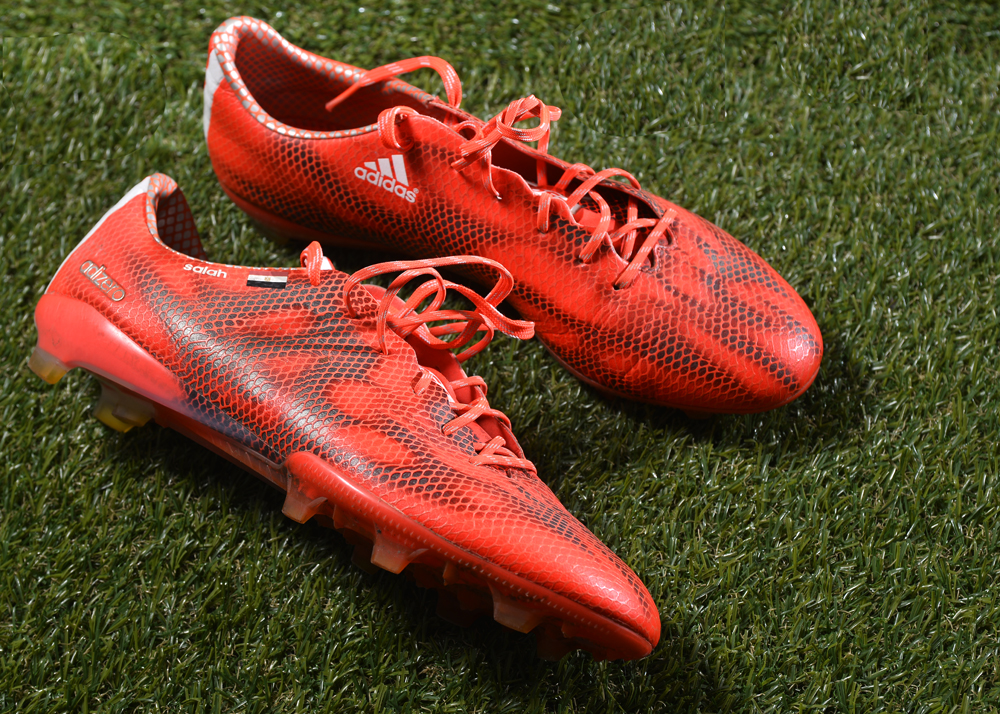 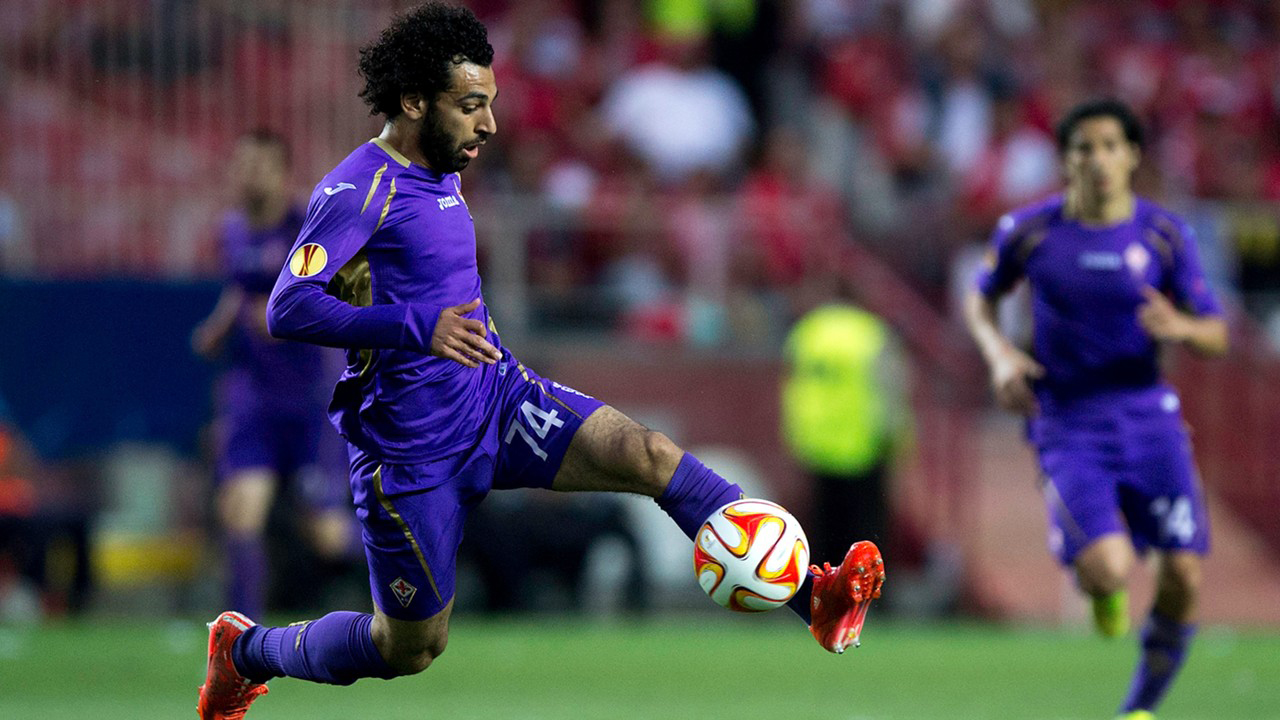 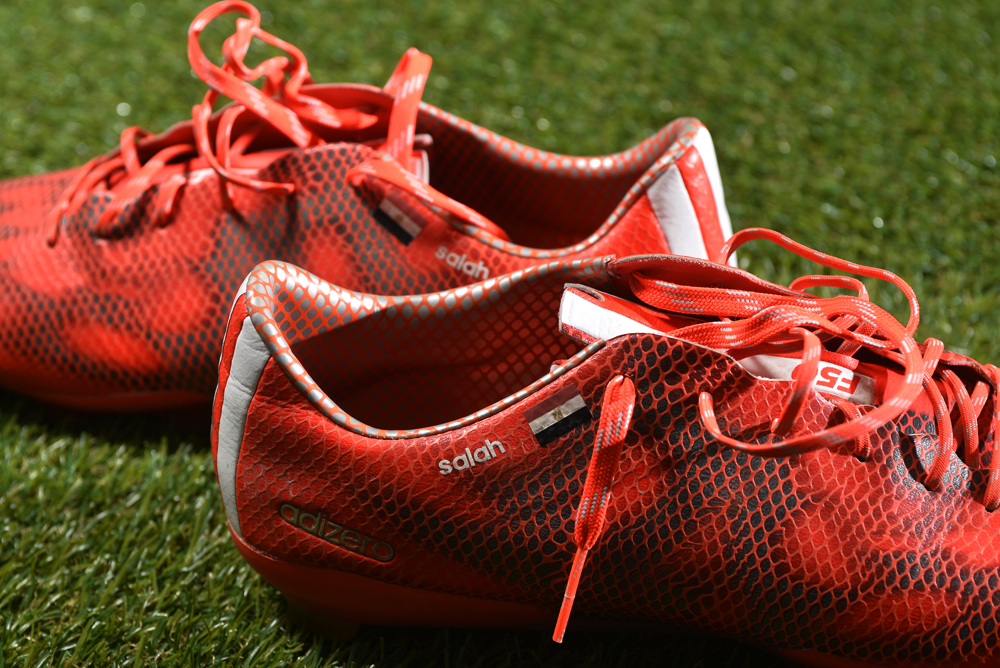 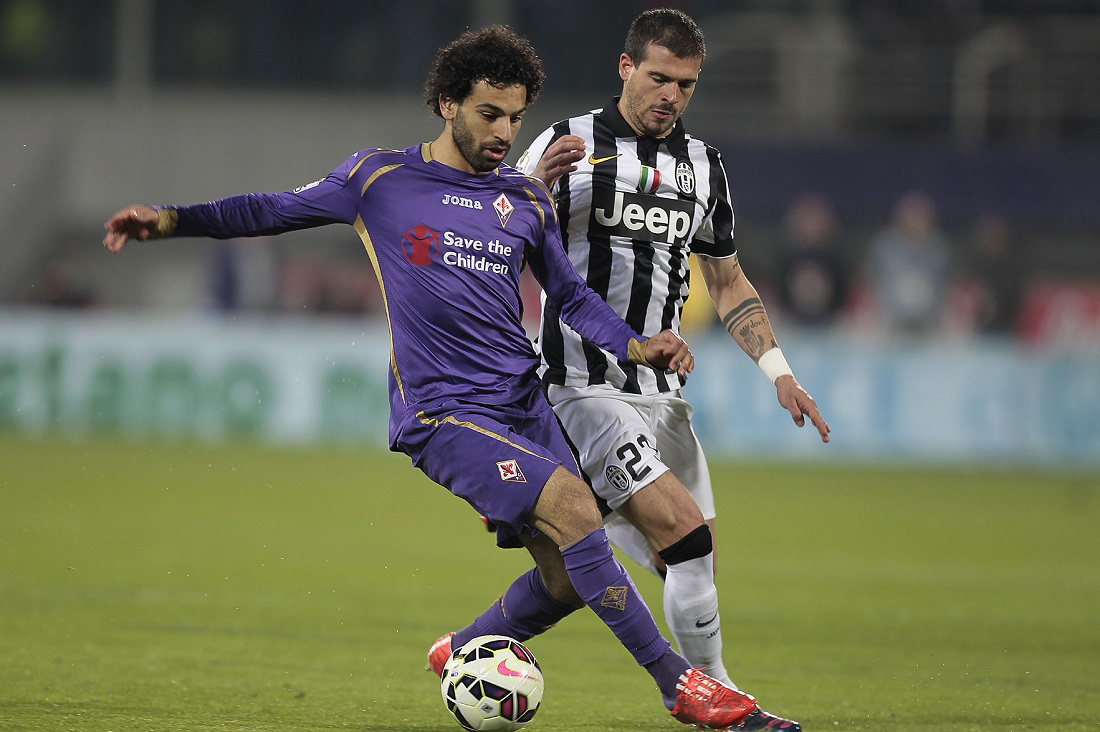 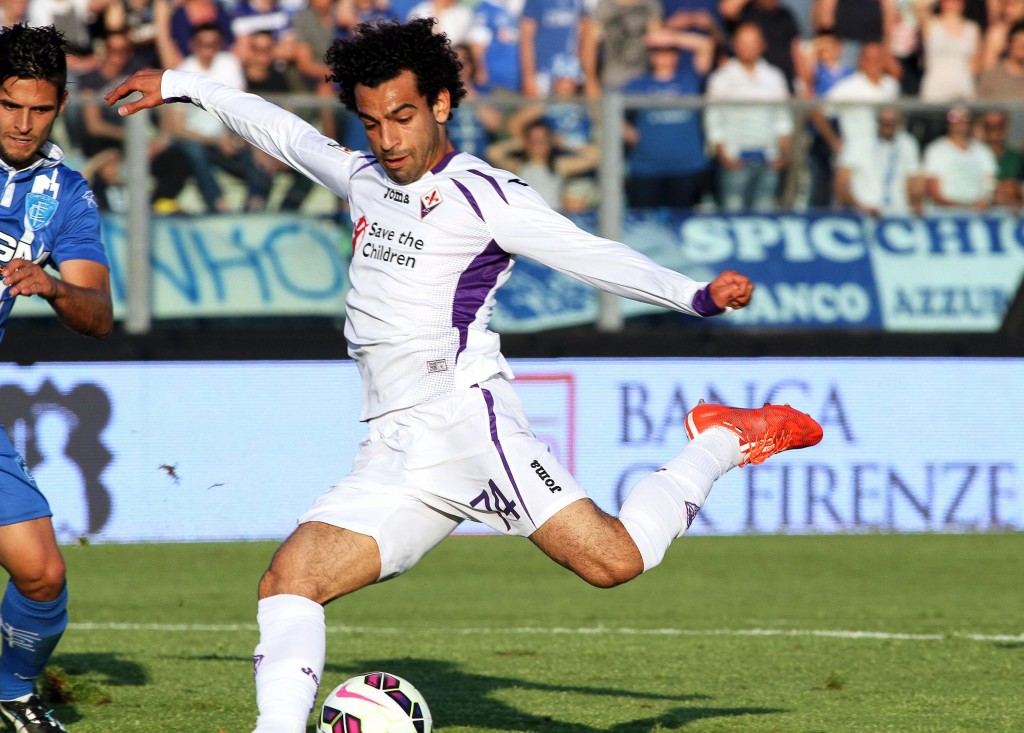 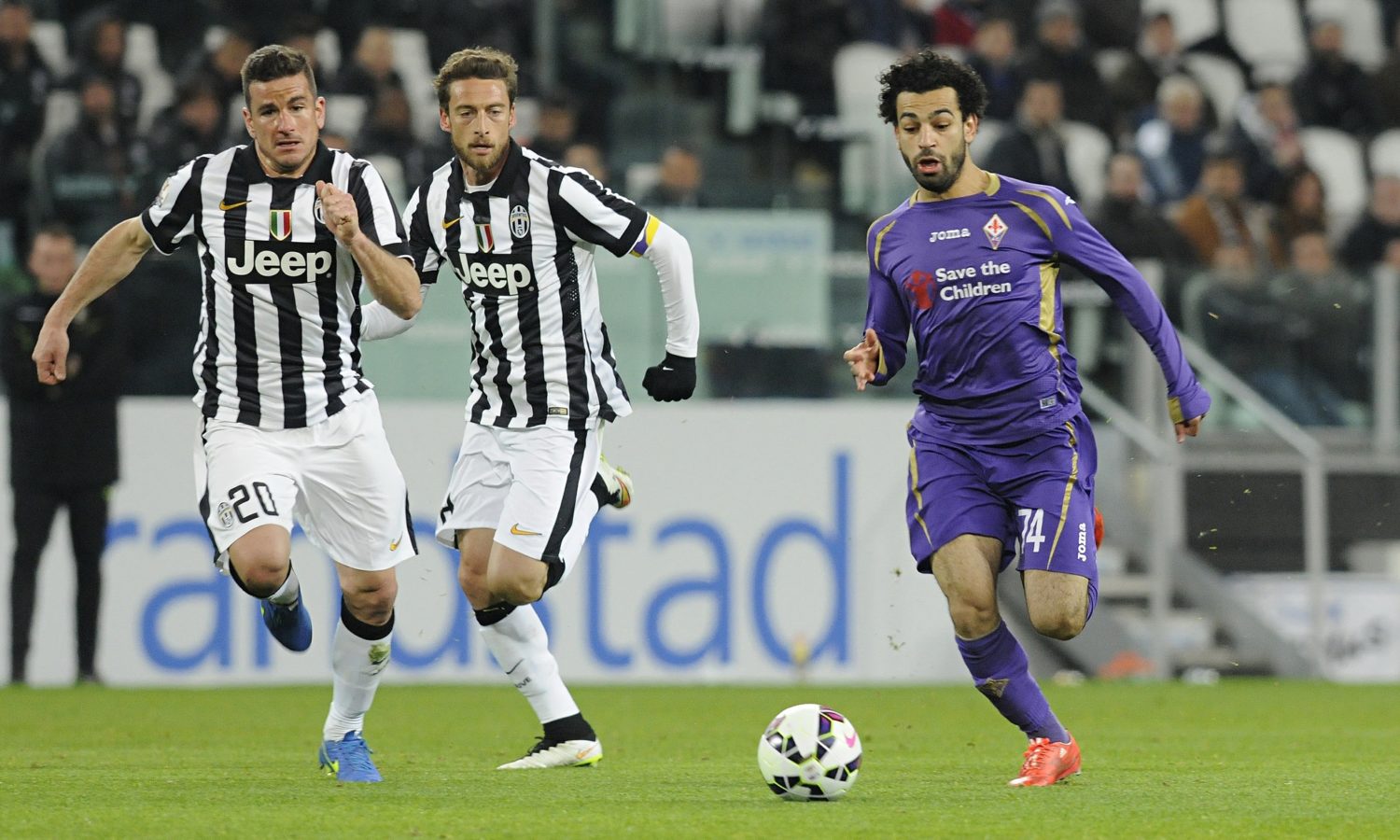 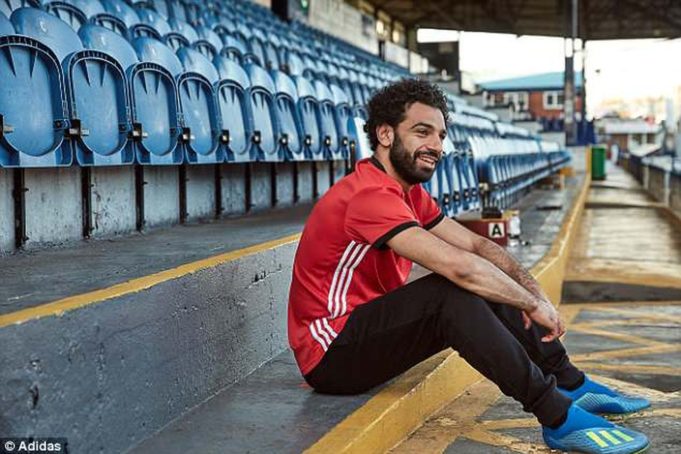 Salah has a sponsorship deal with sportswear and equipment supplier Adidas: he wears Adidas X18 football boots. He appeared in an Adidas 2018 World Cup commercial along with other players in the Adidas stable, including David Beckham, Lionel Messi and Paul Pogba, and singer Pharrell Williams. Salah features in EA Sports’ FIFA video game series: on FIFA 18 he had a rating of 87 and a potential of 90 following his displays for Liverpool. In a 2018 poll by FIFPLAY, a website run and made for the game’s fans, Salah ranked first (ahead of Lionel Messi) on who should be the global cover star for FIFA 19, obtaining 77 percent of the total number of votes. 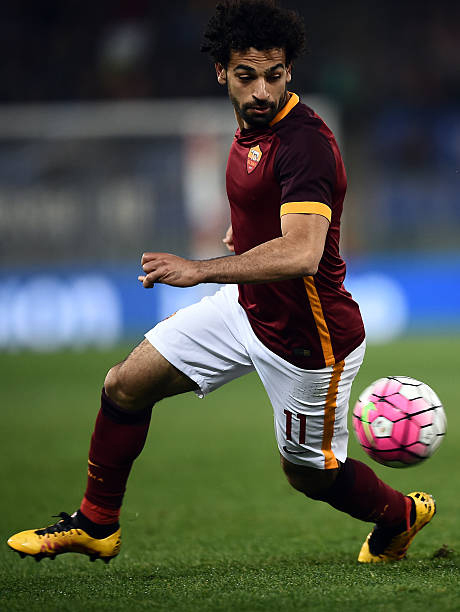 On 6 August 2015, Salah joined Roma on a season-long loan for €5 million; with the option to make the deal permanent, for a reported €15 million. He wore the number 11 shirt. He made his debut on 22 August, as the new season began with a 1–1 draw at Hellas Verona. On 11 September, ACF Fiorentina filed a complaint to FIFA with the claim that Chelsea alleging breach of contract when they allowed Salah to join Roma on loan. On 20 September, Salah scored his first goal of the season against Sassuolo to help Roma salvage a point as the match ended in a 2–2 draw. He went on to score in his following two matches, a 2–1 loss against Sampdoria and a 5–1 win against Carpi. On 25 October, Salah returned to the Stadio Artemio Franchi, scoring the opener against his former Serie A side Fiorentina to help earn a fourth straight league win for Roma. In his return, Salah was also sent off after picking up a second yellow in the closing minutes of the game, only seconds after picking up his first yellow. On 4 November, he scored the opening goal of a 3–2 UEFA Champions League win over Bayer Leverkusen. On 2 February 2016, Salah scored in a 2–0 away win over Sassuolo. Ten days later, on 12 February, he scored in a 3–1 win over Carpi. On 21 February, he scored two goals in quick succession, in a 5–0 home win over Palermo. On 4 March, Salah scored twice in a 4–1 win over former club Fiorentina, overtaking them in the top three. A week later, on 11 March, he scored in a 1–1 draw with Bologna. On 2 May, he scored in a 3–2 away win over Genoa. On 14 May, he scored in a 3–1 away win over Milan on the last day of the league season, scoring the opening goal. At the end of the season, Salah was named Player of the Season, finishing as the club’s top goalscorer with 15 goals in all competitions (14 in Serie A) and six assists. 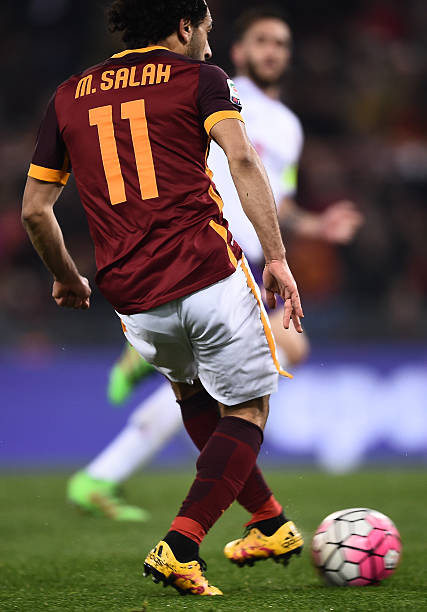 These boots were worn by Mohamed Salah during the Champions League game against Real Madrid which took place in Roma, “Stadio Olimpico”, on February 17th 2016. The player obviously used them in several games but as you can see from the pictures beside, the exact same pair of boots with a very well recognizable scratch on left heel was shot in the A.S.Roma kit room before the game against Real Madrid (lowest picture). 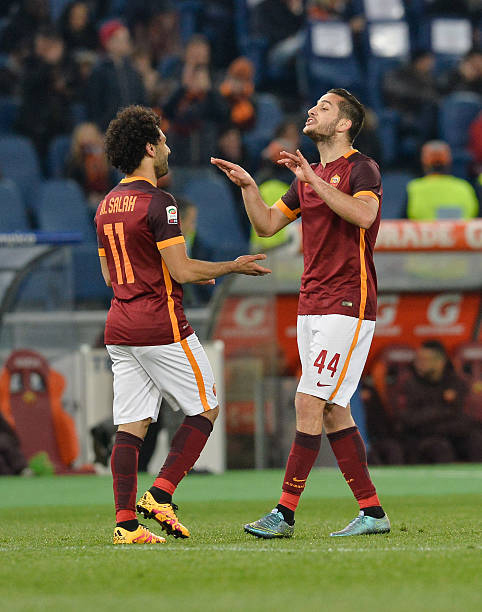 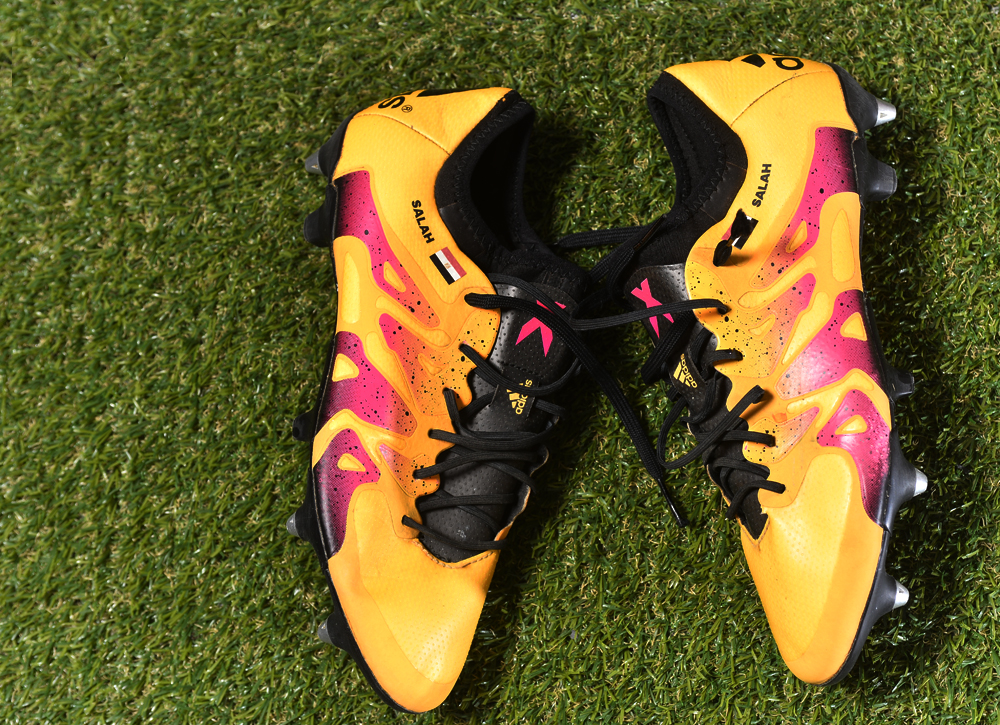 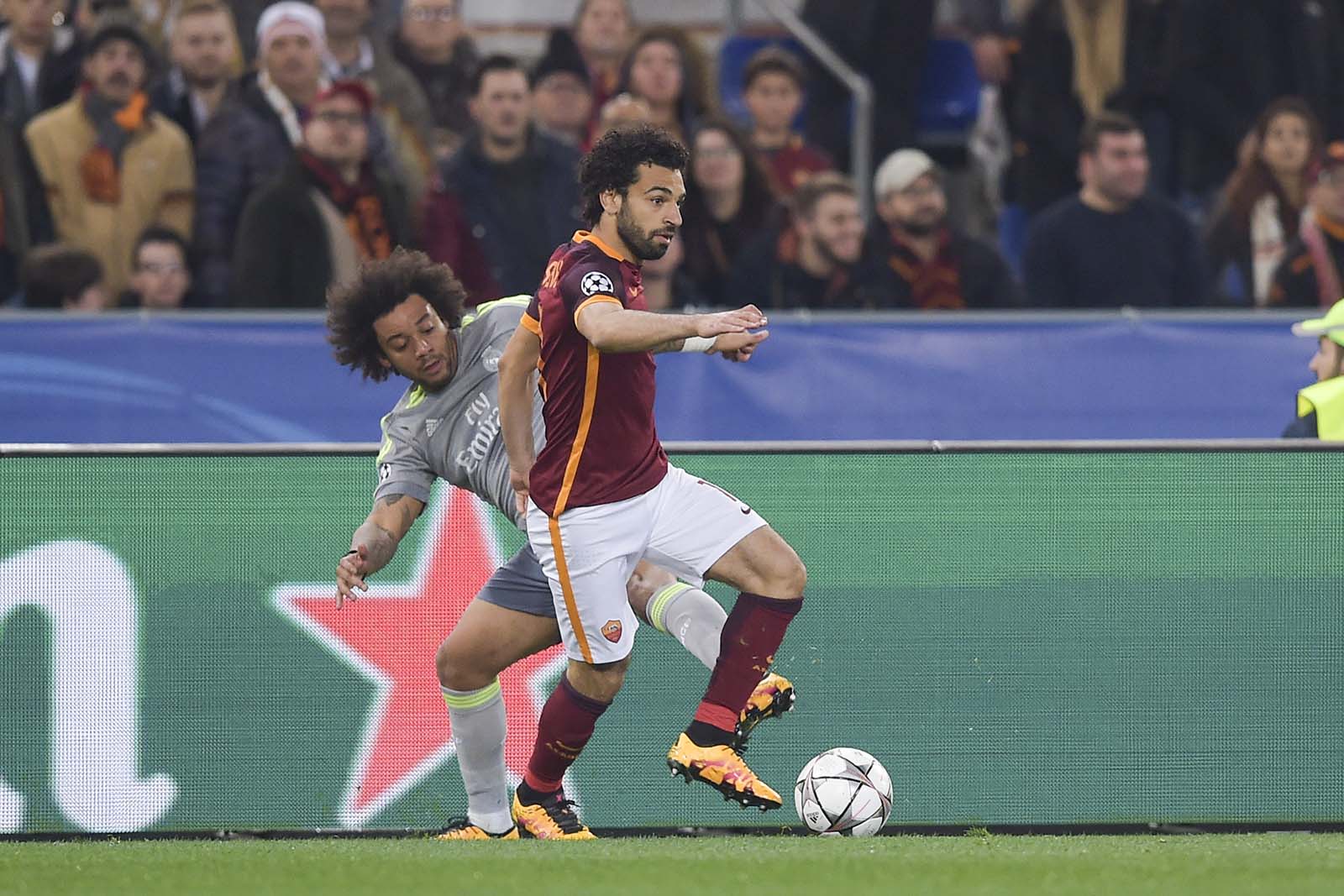 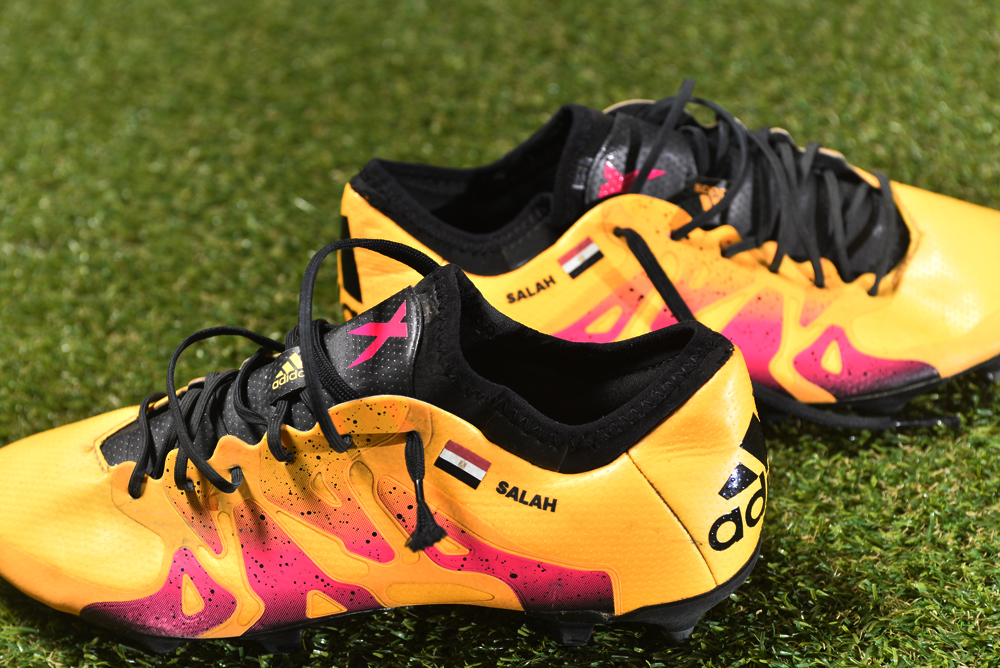 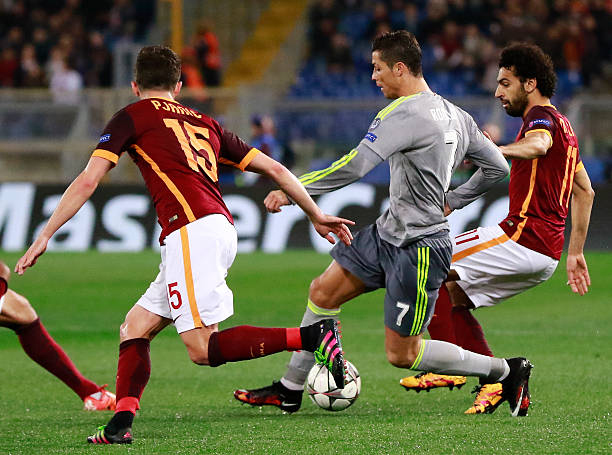 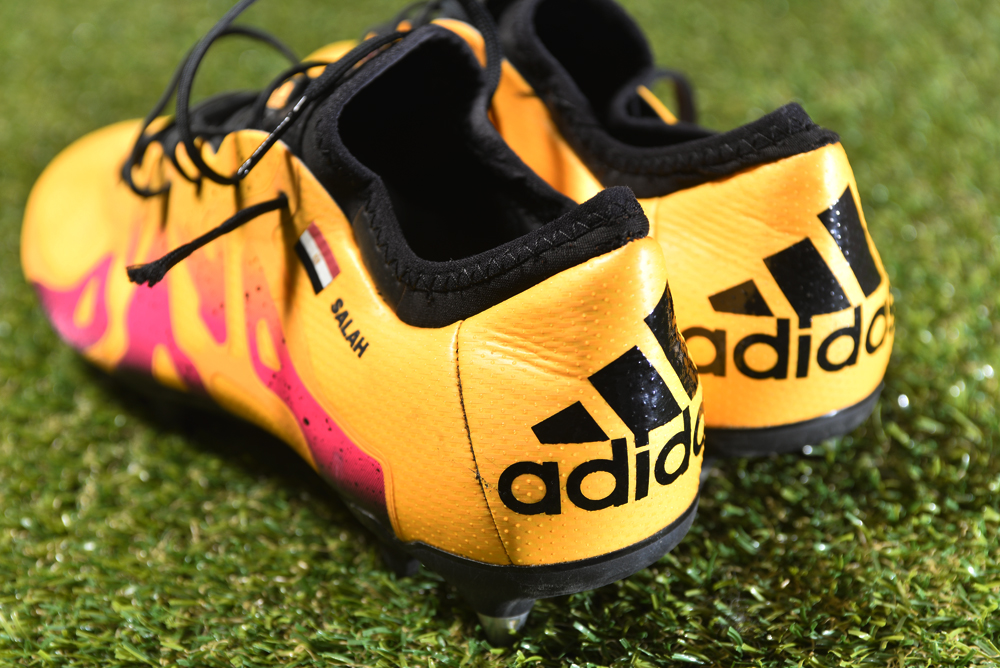 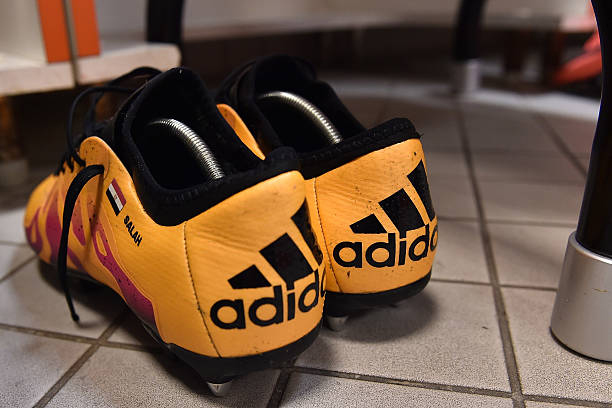 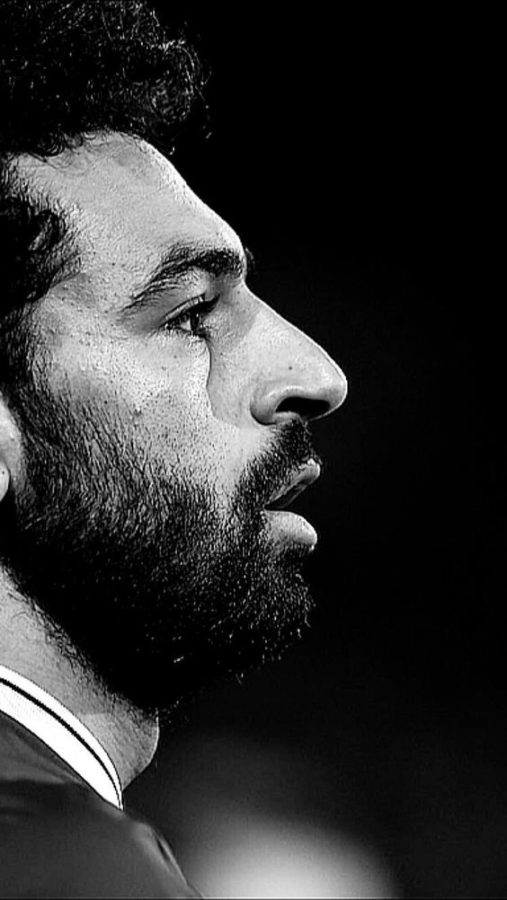 Salah made 11 appearances for the Egypt U-20 team and Egypt U-23 team, representing Egypt in both 2011 FIFA U-20 World Cup and the 2012 Summer Olympics, scoring in all three of the team’s group matches in the latter tournament, helping them to the quarter-finals. On 3 September 2011, Salah made his debut for the Egypt national football team in the 2–1 away defeat by Sierra Leone. He scored his first goal for Egypt’s first team in the 3–0 win against Niger one month later. He later scored a goal in the 93rd minute in stoppage time against Guinea to give Egypt an important 3–2 away victory in a 2014 World Cup qualifier. On 9 June 2013, Salah scored a hat-trick in a 4–2 away win against Zimbabwe as Egypt won their fourth consecutive match in the World Cup qualifiers. A week later in the following match, he scored the only goal away to Mozambique, putting Egypt into the final qualifying group. Salah later scored his sixth goal in a qualification match to the joint-top scorer among all African teams in the qualification stages. Salah was the top scorer for Egypt with five goals during the 2018 FIFA World Cup qualification, including both goals in the decisive 2–1 victory over Congo, one of which was a penalty in the last minute to make the Pharaohs reach their first World Cup finals since 1990. Despite doubts over his fitness following his shoulder injury, Salah was included in Egypt’s 29-man provisional squad for the 2018 FIFA World Cup and was included in their final 23-man squad on 4 June. He missed Egypt’s opening match against Uruguay on 15 June, which the Pharaohs lost 1–0, conceding in the 89th minute. On 19 June, Salah scored a penalty in Egypt’s 3–1 defeat to hosts Russia at the Krestovsky Stadium, Saint Petersburg. In Egypt’s final group game on 25 June, Salah scored his second goal of the World Cup with a chip over the goalkeeper in Egypt’s 2–1 defeat to Saudi Arabia at Volgograd Arena. 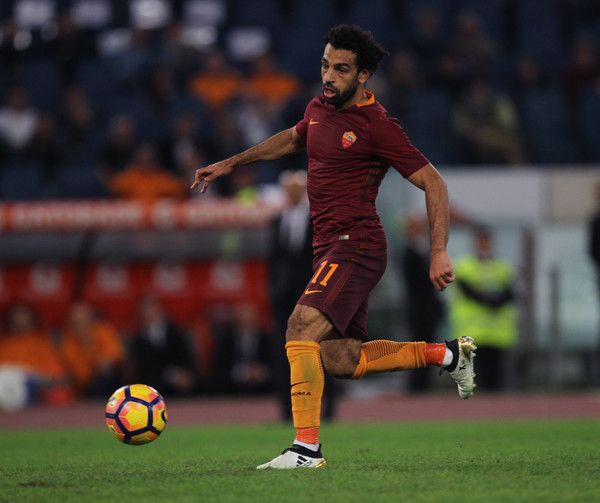 Mohamed Salah married Maggi in 2013. Their daughter, Makka, born in 2014 is named in honor of the Islamic holy city. Salah is Muslim and often celebrates goals by performing the sujood. Liverpool fans created a chant to the tune of Dodgy’s “Good Enough”, saying that if Salah continued to score goals, they would convert to Islam – “If he’s good enough for you, he’s good enough for me, if he scores another few, then I’ll be Muslim too.” Salah gave his approval to the chant, and it has been cited as an example of inclusivity. While Salah is devout to a degree that many other well-known Muslims sports figures are not (his wife wears a veil, for example), his charm and apolitical persona have made him a popular figure in the UK. Salah is nicknamed “The Pharaoh” by the press and his fans. More recently, Salah was given the nickname “Egyptian King” by Liverpool supporters, arising from a chant set to the tune of “Sit Down” by English band James. Following his goal that led Egypt to the World Cup finals for the first time since 1990, a school in Egypt was named after him. Following Egypt’s exit from the World Cup, Salah stayed in his home country for his pre-season holiday. In late June, his address was accidentally leaked on Facebook. After this, crowds of fans showed up at Salah’s house, with Salah greeting the fans and signing autographs for some, although according to reports in Spain, police did arrive to cordon off his house. 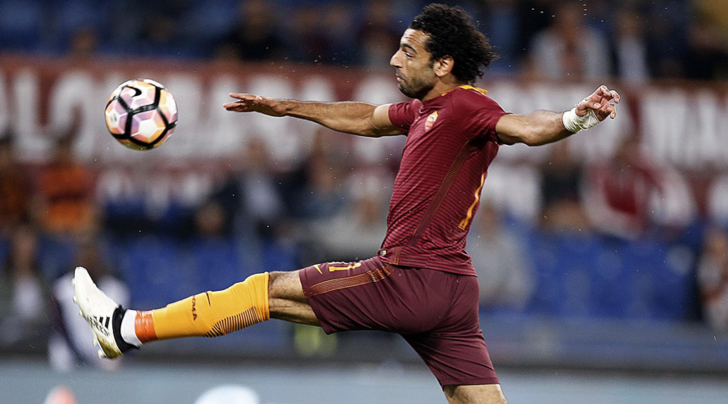 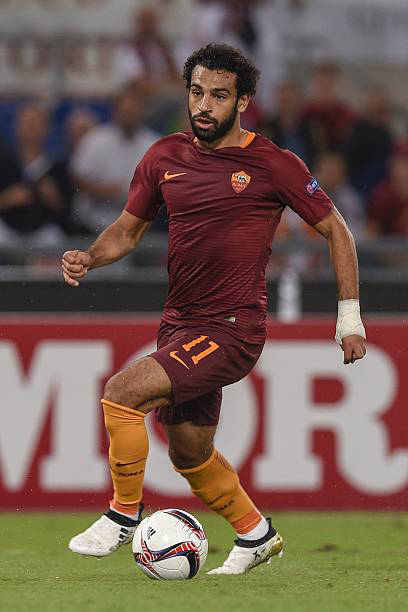 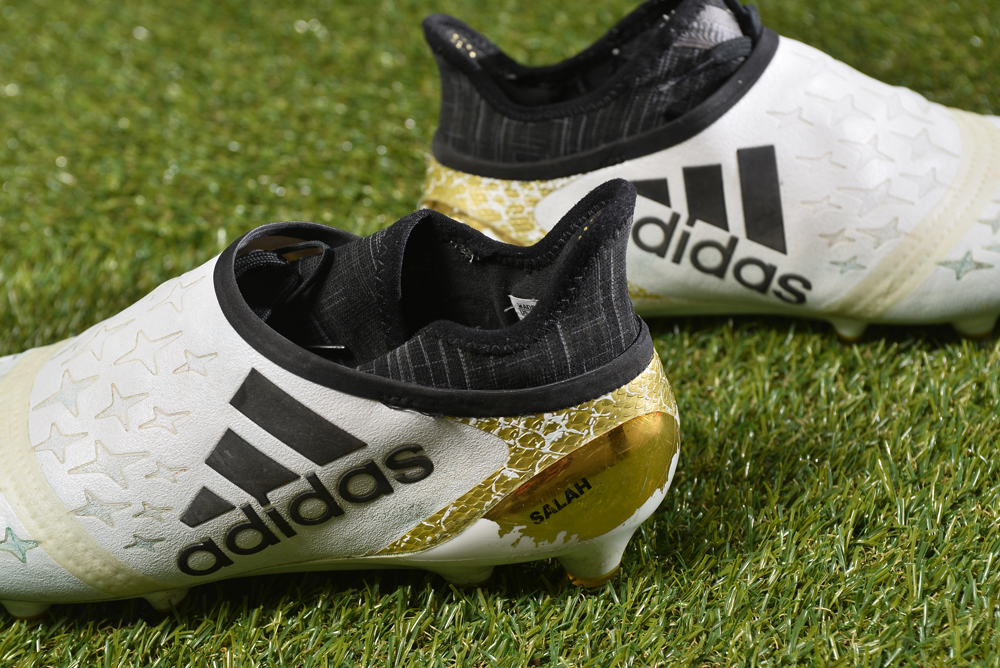 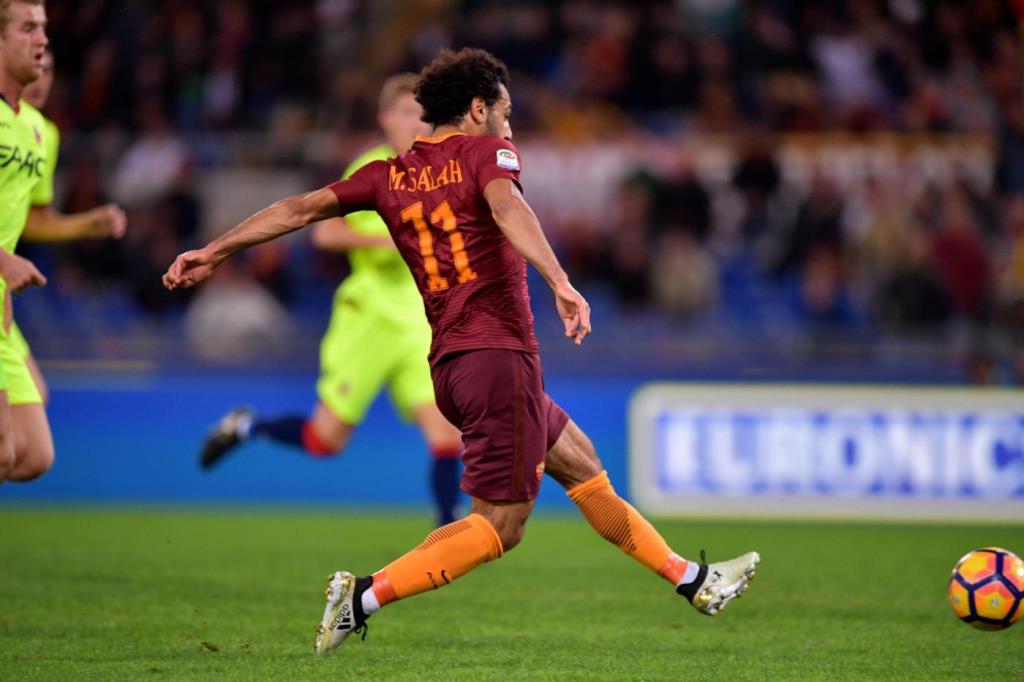 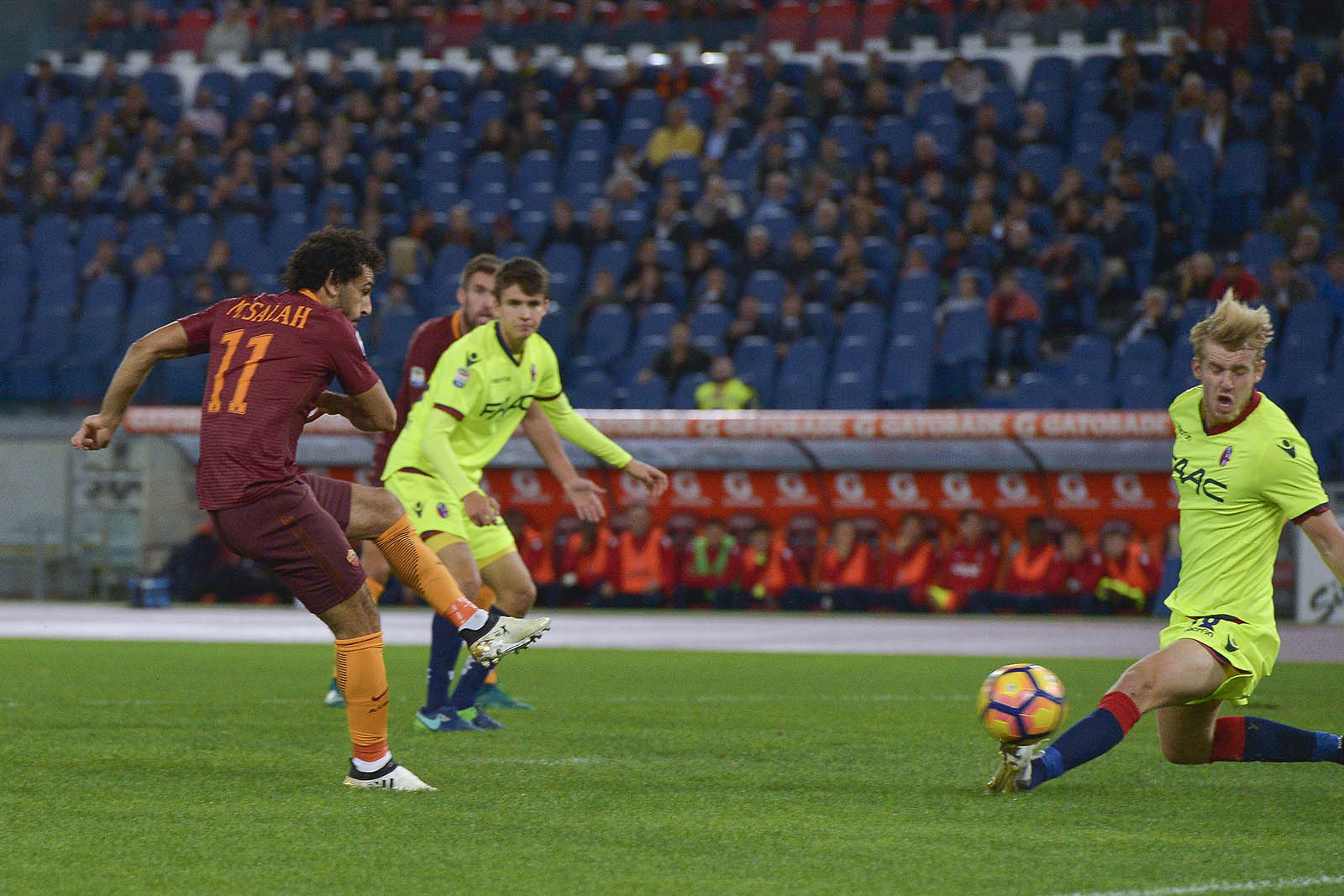 Grosso Grosso2021-06-26T11:48:12+00:00
Page load link
This site uses cookie technology, including third parties' ones. If you want to know more click here. If you access any element of this site outside this banner, you consent to the use of cookies. Ok
<script type='text/javasc