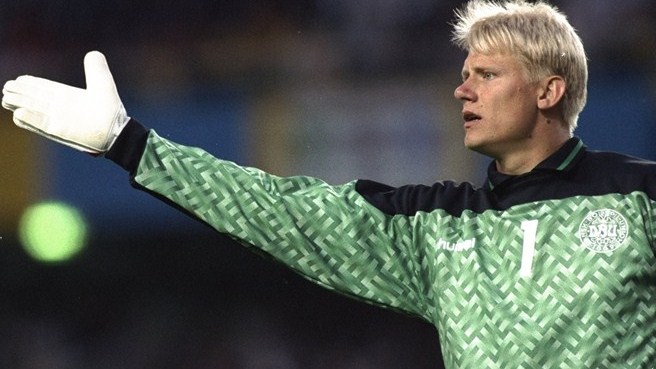 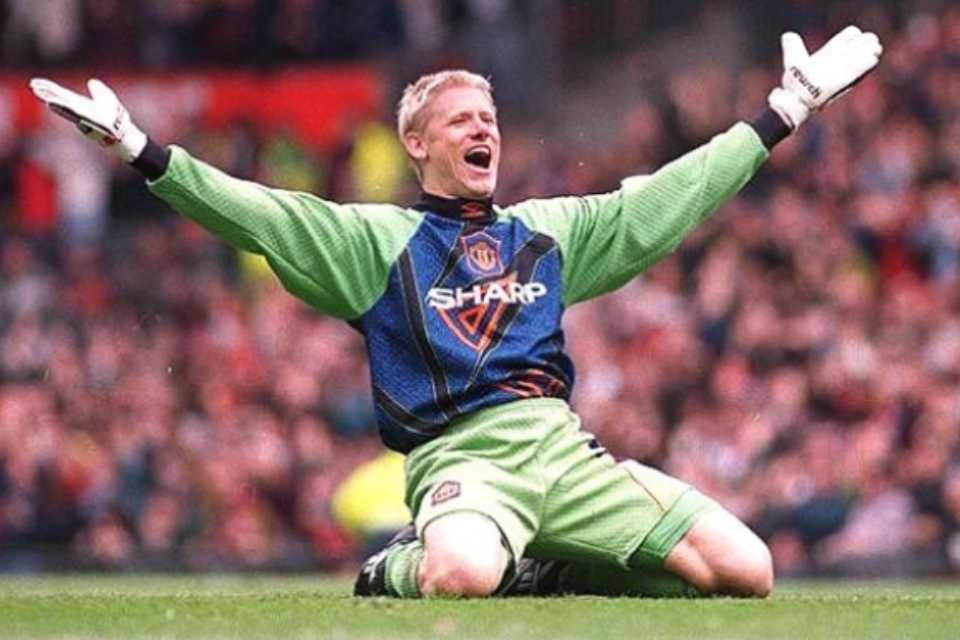 Peter Bolesław Schmeichel is a Danish former professional footballer who played as a goalkeeper, and was voted the IFFHS World’s Best Goalkeeper in 1992 and 1993. He is best remembered for his most successful years at English club Manchester United, whom he captained to the 1999 UEFA Champions League to complete the Treble, and for winning UEFA Euro 1992 with Denmark. Born in Gladsaxe, Copenhagen, Schmeichel was famous for his intimidating physique (at 1.91 m (6 ft 3 in) tall and weighing close to 100 kg (15 st 10 lb) during his playing days), and wore specially made size XXXL football shirts. A fierce competitor, he was known for his loud, unstinting criticism of mistakes he believed the defenders in front of him committed. Unusually for a goalkeeper, Schmeichel scored 11 goals during his career, including one for the national team. He is also the most capped player for the Denmark national team, with 129 games between 1987 and 2001. In addition to Euro 92, he played for his country at the 1998 FIFA World Cup and three additional European Championship tournaments. He captained the national team in 30 matches. He also represented Gladsaxe Hero, Hvidovre, Brøndby, Sporting CP, Aston Villa and Manchester City in a career that lasted from 1981 until 2003 and yielded 24 trophies. Regarded as one of the greatest goalkeepers of all-time, the IFFHS ranked Schmeichel among the top ten keepers of the 20th century in 2000, and in 2001, Schmeichel won a public poll held by Reuters, when the majority of the 200,000 participants voted him as the best goalkeeper ever, ahead of Lev Yashin and Gordon Banks. In 2003, Schmeichel was inducted into the English Football Hall of Fame in recognition of his impact on the English game. In March 2004, he was named as one of the “125 greatest living footballers”, at the FIFA 100 celebrations.

In 2002, Schmeichel completed a move to Manchester City on a free transfer. He played only one season, in 2002–03. Schmeichel’s record in the Manchester derby is exceptional, in that he was never on the losing side. During his nine years with Manchester United, they were unbeaten against Manchester City, while in his single season with City, they won at Maine Road and drew at Old Trafford. Schmeichel announced his retirement from football in April 2003 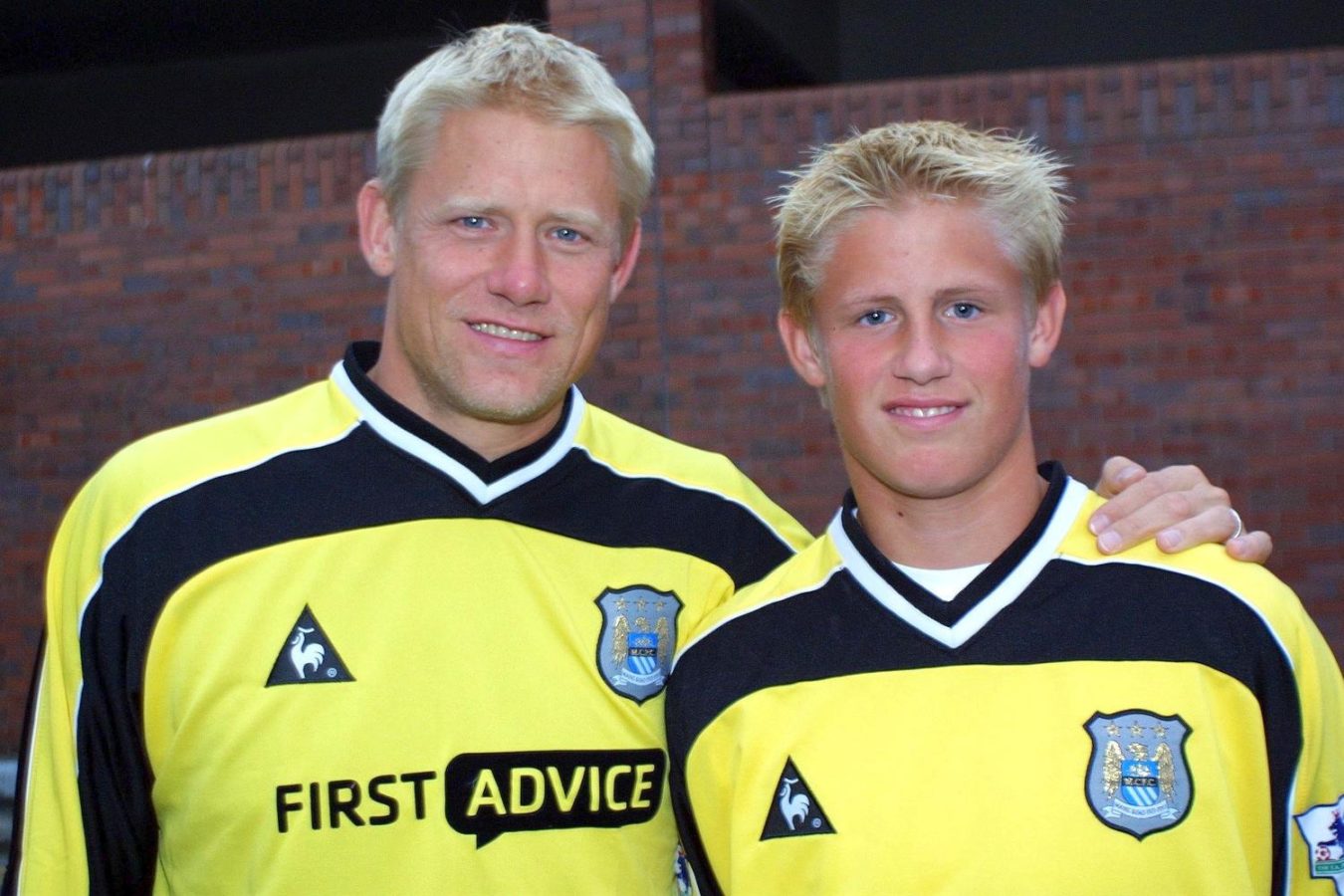 While Peter Schmeichel joined Manchester City also his son Kasper joined the team. It was September 2002 when his son signed a long-term contract, which covered schoolboy, scholar and professional terms. 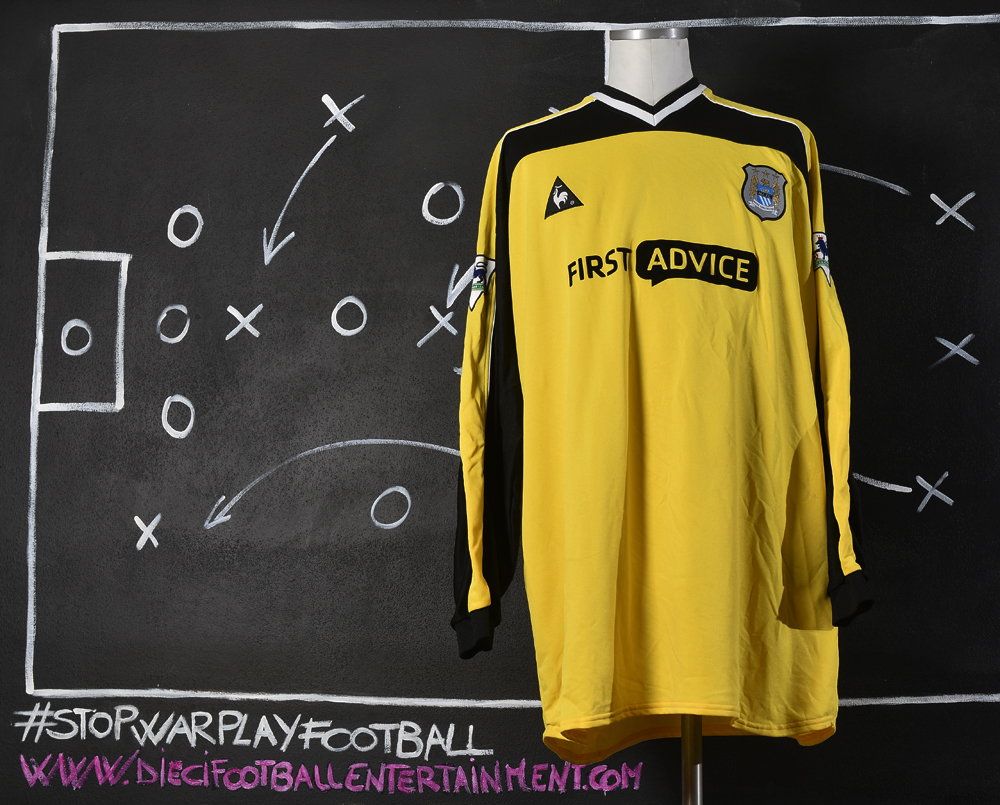 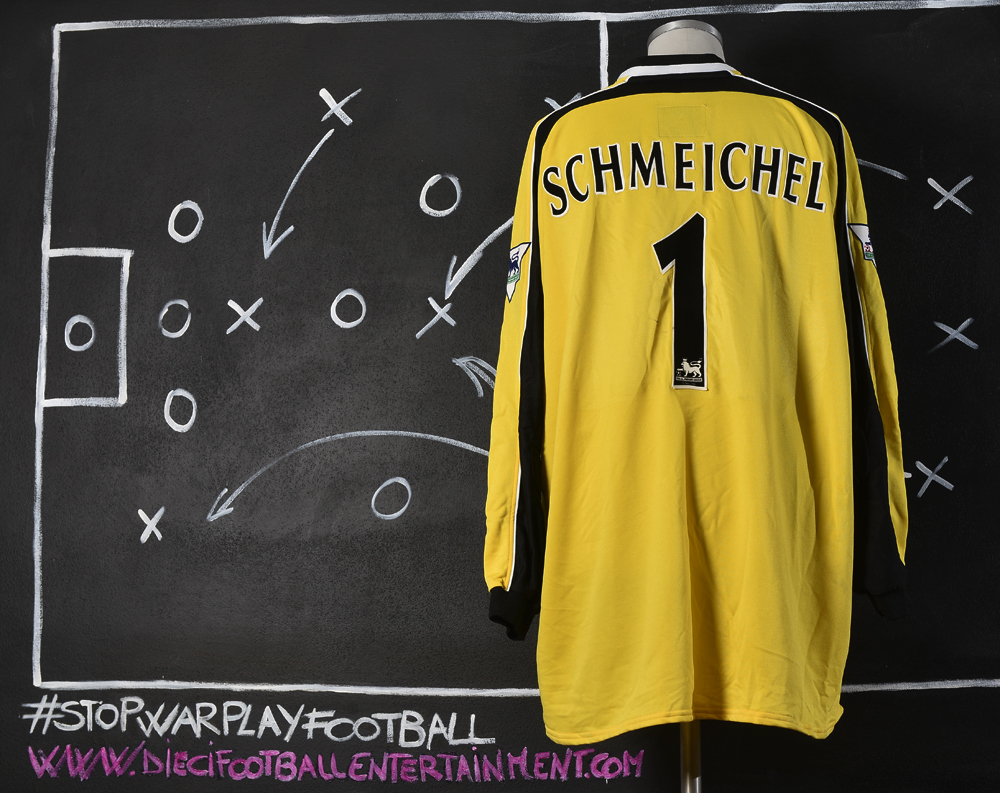 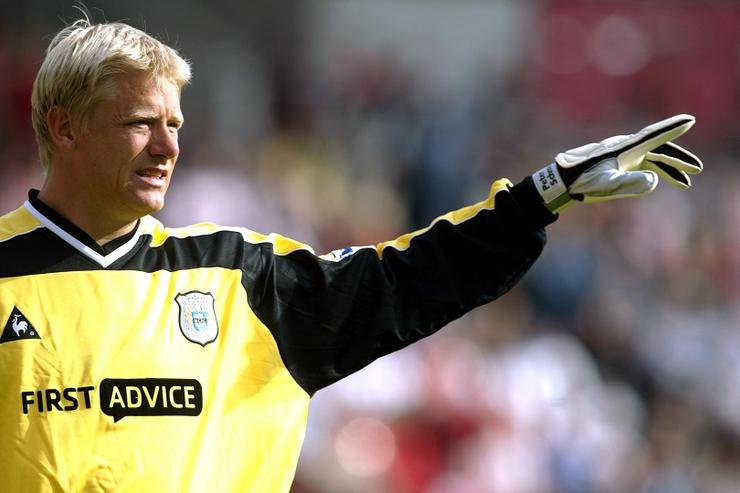 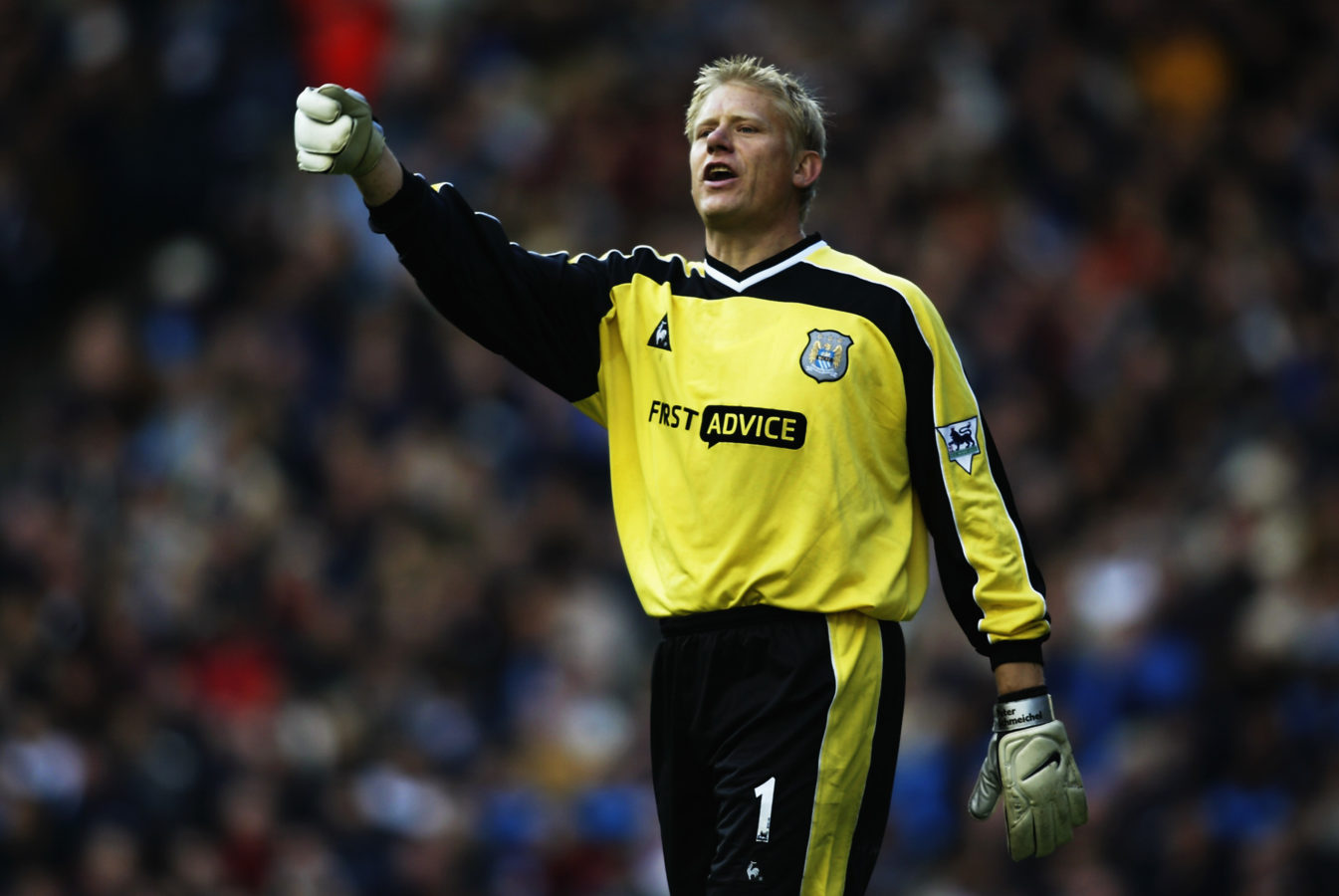 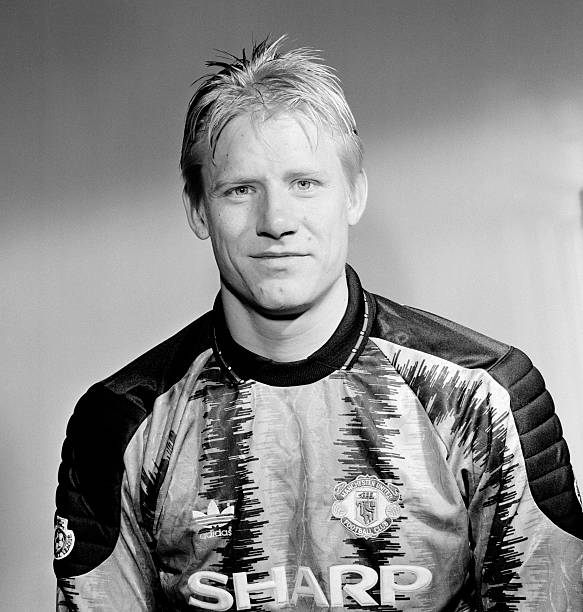 Schmeichel is widely regarded by pundits, as well as both former and current goalkeeping colleagues, as one of the greatest goalkeepers of all time, and also as Denmark’s greatest goalkeeper ever, and has been described as a modern, talented, world-class, and complete goalkeeper, who also stood out for the longevity of his career. A tall, strong and physically imposing goalkeeper, with a large frame and long reach, as well as excellent reflexes, he was also extremely athletic and agile for a player of his size, and was known for his ability to cover the goal with his trademark “star jump” saves, a technique he reportedly developed from playing handball. He was highly regarded for his goalkeeping technique, shot-stopping ability, and positioning between the posts, as well as his command of his area, handling, and ability to rush off his line both in one on one situations or when coming out to claim crosses. A courageous and fierce competitor, he was a vocal presence in goal, known for his strong character, mentality, ability to organise his defence, and leadership from the back, as well as for his criticism of his defenders whenever they made mistakes. He was also effective at stopping penalties. In addition to his goalkeeping ability, he was also known for his capacity to read the game, as well as his adeptness with the ball at his feet, and his distribution and ability to launch swift counter-attacks with his long and accurate throws and kicks. Unusually for a goalkeeper, he would often go up for corner kicks in the opposition’s area when his team were trailing, and scored 11 goals in his career. 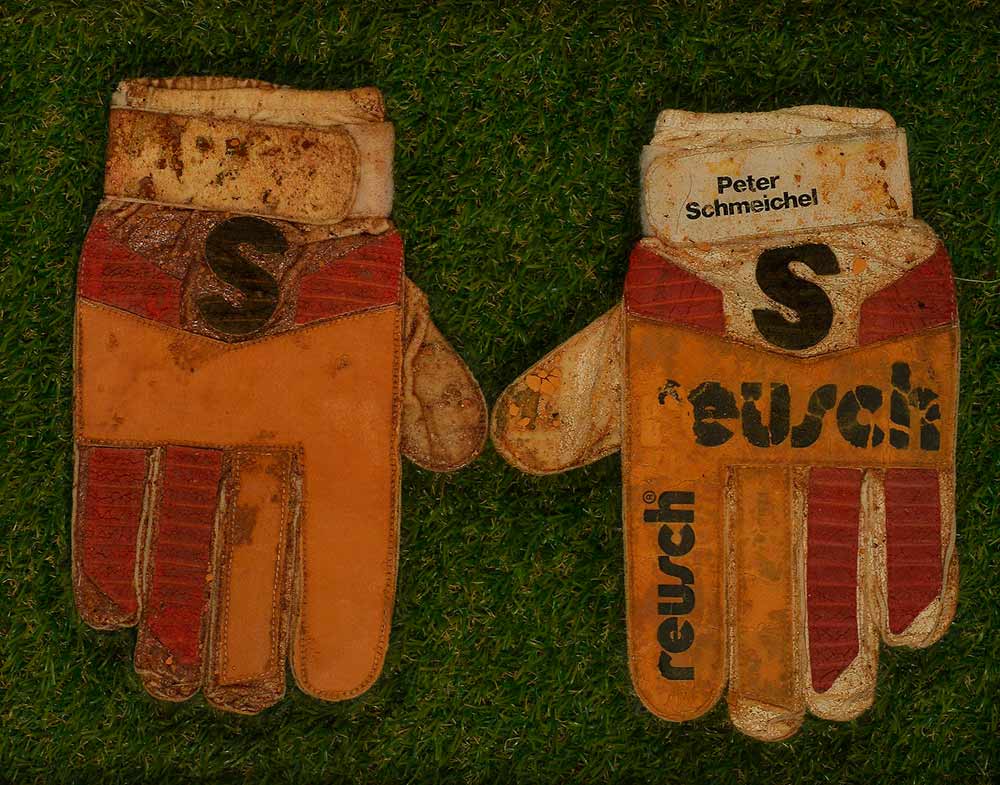 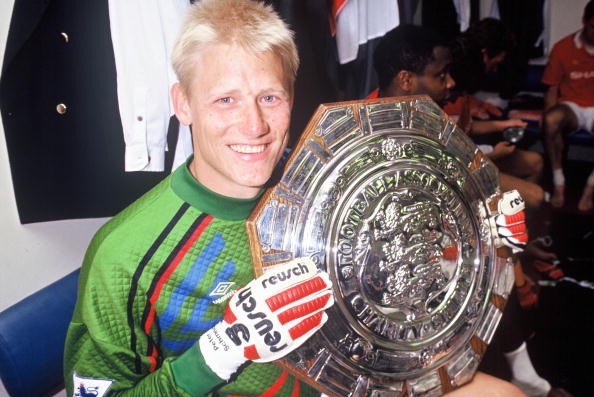 Following his showings on the international scene, Manchester United signed Schmeichel on 6 August 1991 for £505,000, a price described in 2000 by Manchester United manager Alex Ferguson as the “bargain of the century.” It was mainly because at the time, Schmeichel was a relative unknown outside of Denmark, especially within the United squad members. Schmeichel played the bulk of his career for United, eight years in total. With United, Schmeichel won five FA Premier League titles, three FA Cups, one League Cup, and the UEFA Champions League. Manchester United finished as runners-up in Schmeichel’s first season (also winning the Football League Cup for the first time in the club’s history), but it was on the international stage that Schmeichel enjoyed his biggest success that year. In the Danish national team under new national manager Richard Møller Nielsen, Schmeichel was Denmark’s starting goalkeeper at the Euro 92 tournament which they won. He saved a penalty kick from Marco van Basten in the semi-final, and held a cross with one hand in the final. He made a string of important saves during the tournament, and was elected “The World’s Best Goalkeeper 1992”. In the 1992–93 season, 22 clean sheets from Schmeichel helped United win the Premier League championship, the first time the club had won England’s top trophy in 26 years. Schmeichel was once again named “The World’s Best Goalkeeper” in 1993. In January 1994, Schmeichel fell out with Ferguson, as United had squandered a 3–0 lead to draw 3–3 with Liverpool. The two had a row where Schmeichel “said the most horrible things”,[19] and he was subsequently sacked by Ferguson. A few days later, Schmeichel made an improvised apology to the other players. Unknown to him, Ferguson was eavesdropping on this, and he let Schmeichel stay at Manchester United. Schmeichel and United repeated the Premier League championship win at the end of the season. Despite being a goalkeeper, he would run into the attack on corner kicks if his team was behind. The sight of him going up for the corner was a great distraction to opposing defenders. He scored a goal in this fashion, for Man United, in a 1995 UEFA Cup match against Rotor Volgograd. He scored in the last minutes of the game, though United were eliminated from the tournament on the away goals rule. Schmeichel played for Denmark at Euro 96 hosted by England. The defending European Champions went out in the preliminary group stage, despite delivering results equivalent to the Euro 92 tournament. Following a match against Arsenal in November 1996, Schmeichel was accused of racism by Arsenal striker Ian Wright. During the game, Schmeichel and Wright had a number of controversies, and at the end of the game, the two players confronted each other on their way off the pitch. After the game, news emerged of a police inquiry into the incident, where it was alleged that Schmeichel had made a racist remark. After months of politicising by The FA and The PFA, who wanted a “converted” Schmeichel as their posterboy of the “Kick Racism out of Football” campaign, no evidence was found and the case was dropped. Under new national manager Bo Johansson, Schmeichel was a part of the Danish squad at the 1998 FIFA World Cup. He was one of the leading members of the Danish campaign, which ended in a 3–2 quarter-final defeat to Brazil. Schmeichel ended his Manchester United career on the highest note, when Schmeichel and United won the Treble, the FA Premier League title, FA Cup and UEFA Champions League, in the same season. In that year’s FA Cup semi-final against Arsenal, Schmeichel saved a penalty kick by Dennis Bergkamp in the last minutes of the game (which Schmeichel revealed he was unaware of time), to send the game into extra time. In the absence of the suspended Roy Keane, he captained United in the UEFA Champions League final in May 1999. German opponents Bayern Munich had a 1–0 lead until the dying minutes of the game, when United received a corner kick. Schmeichel ran into the attack attempting to cause confusion, and Teddy Sheringham scored the equalising goal. A few seconds later, Ole Gunnar Solskjær scored the 2–1 winner for United to ensure that Schmeichel’s United career ended on the highest possible note. In an unforgettable celebratory moment, Schmeichel was shown cartwheeling gleefully in his area after Solskjær’s winning goal. With his departure, Manchester United had trouble finding a replacement for him, going through several high-profile goalkeepers including Mark Bosnich, Massimo Taibi, Fabien Barthez, Tim Howard and Roy Carroll before finally buying Edwin van der Sar, who Sir Alex Ferguson considered the best goalkeeper to have played for the club since Schmeichel. 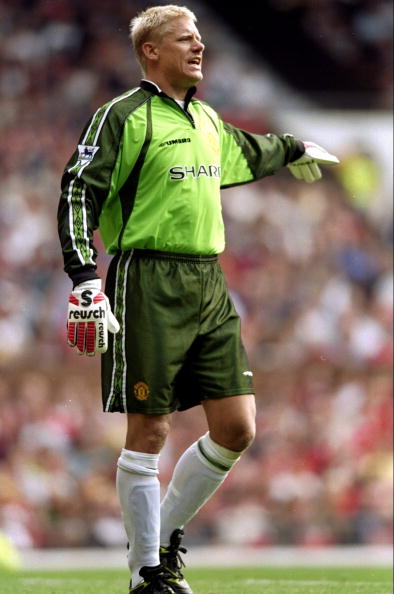 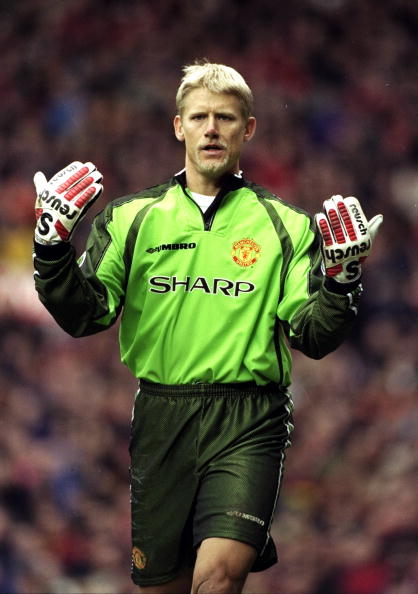 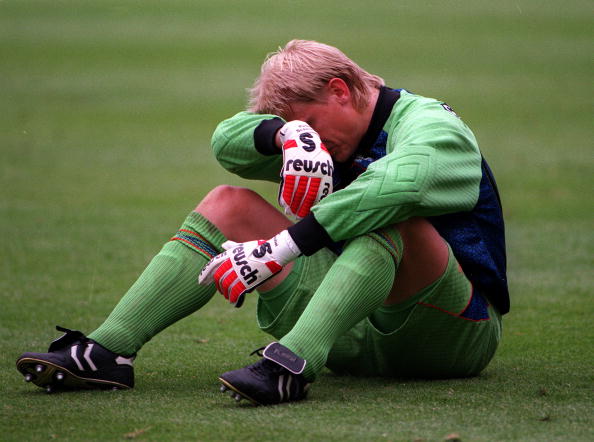 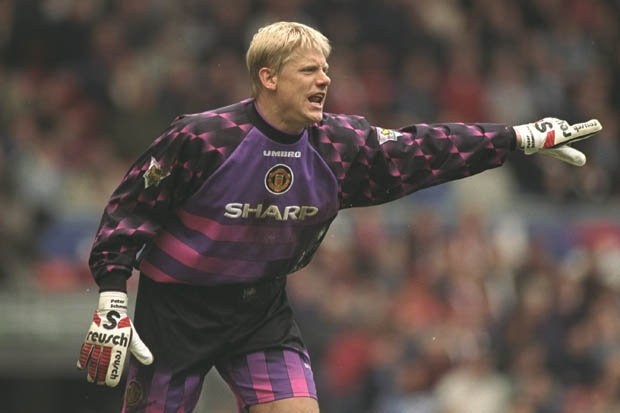 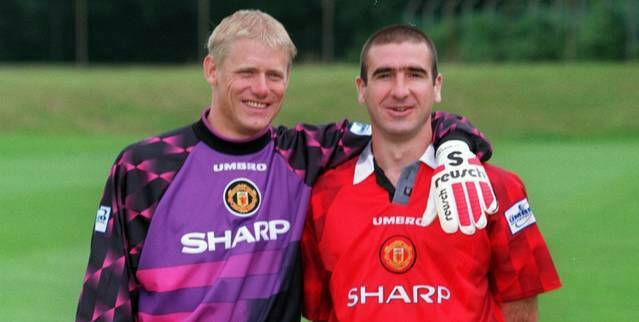 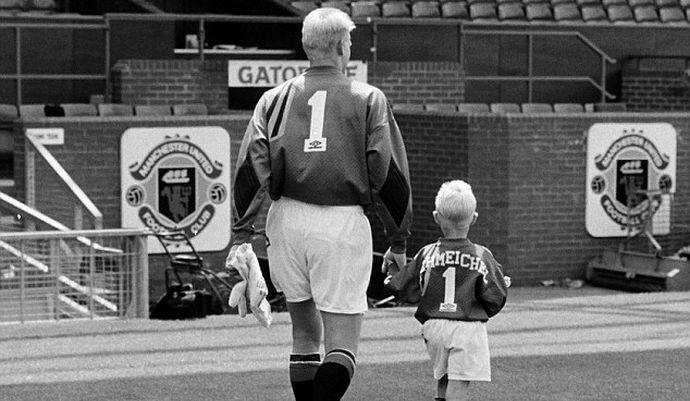 His son, Kasper, is also a professional football goalkeeper currently playing for Premier League side Leicester City and the Denmark national team. On May 2016, Kasper Schmeichel won the Premier League title at 29 years of age, the same age and same calendar day when his father won Manchester United’s first such title in 1993. On both occasions, the respective teams (Manchester United and Leicester City) clinched the titles by nearest rivals (Aston Villa and Tottenham Hotspur) not winning. The Schmeichels became the only biological father and son to win the Premier League. 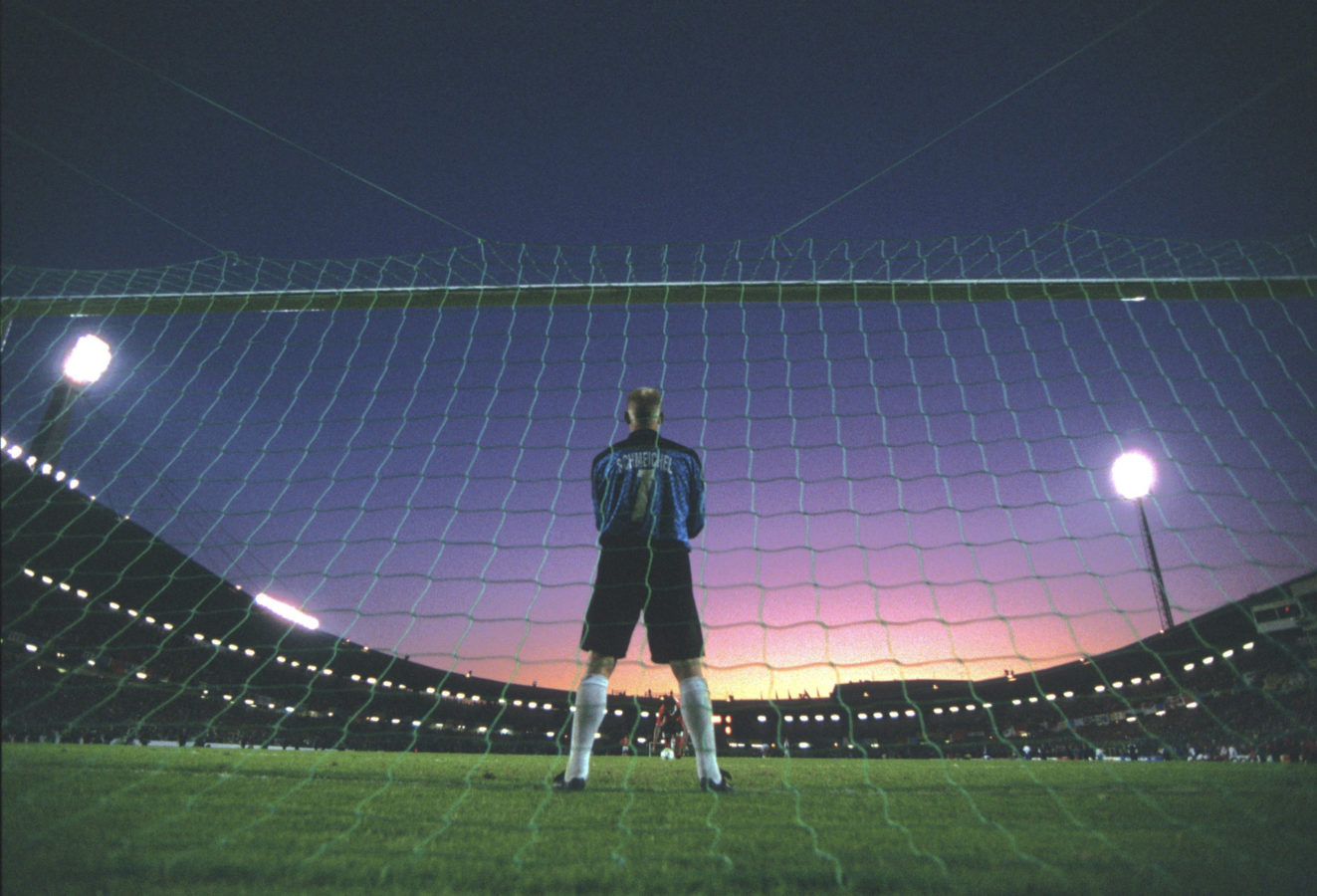 Grosso Grosso2019-04-24T08:16:52+00:00
Page load link
This site uses cookie technology, including third parties' ones. If you want to know more click here. If you access any element of this site outside this banner, you consent to the use of cookies. Ok
Go to Top