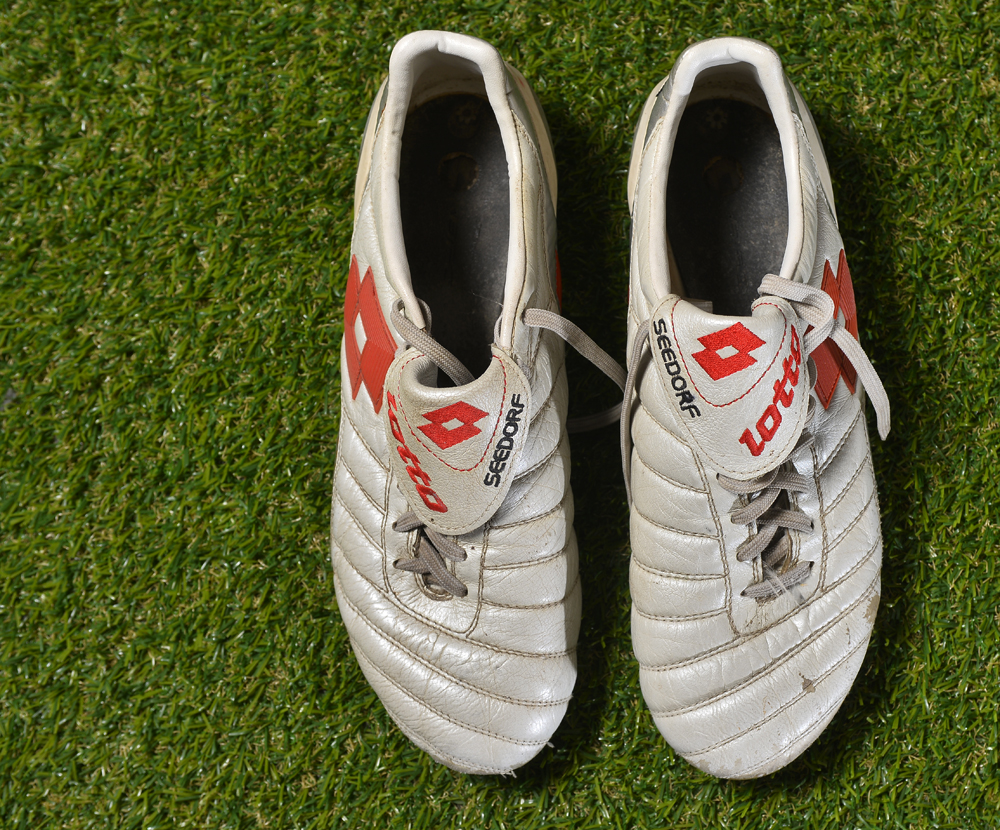 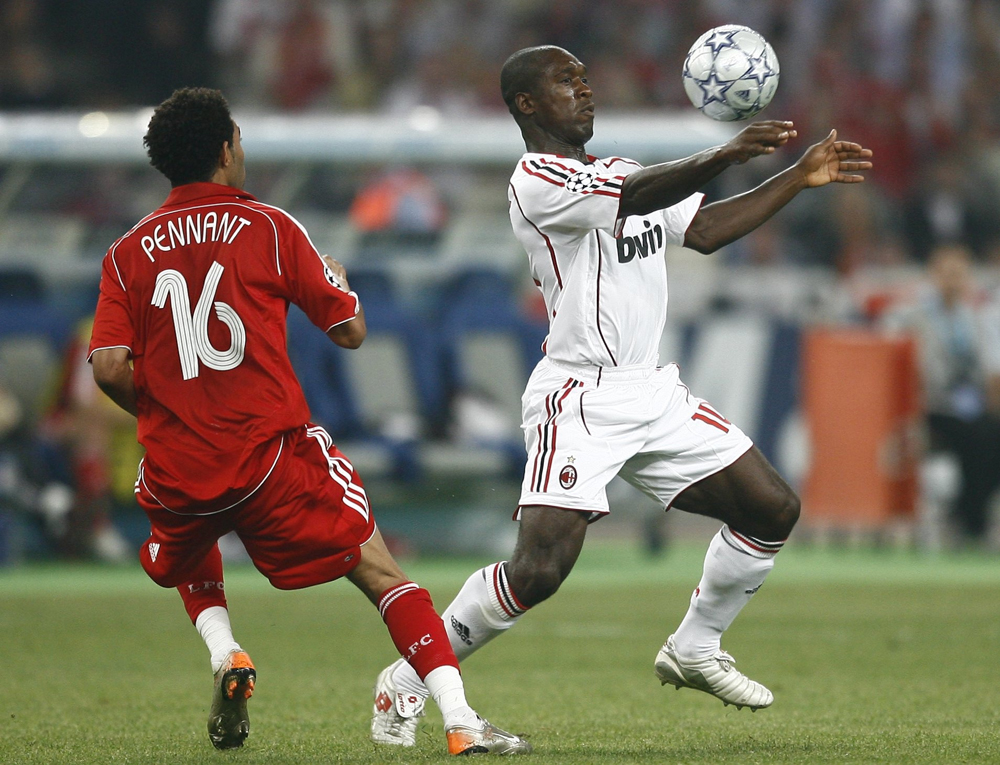 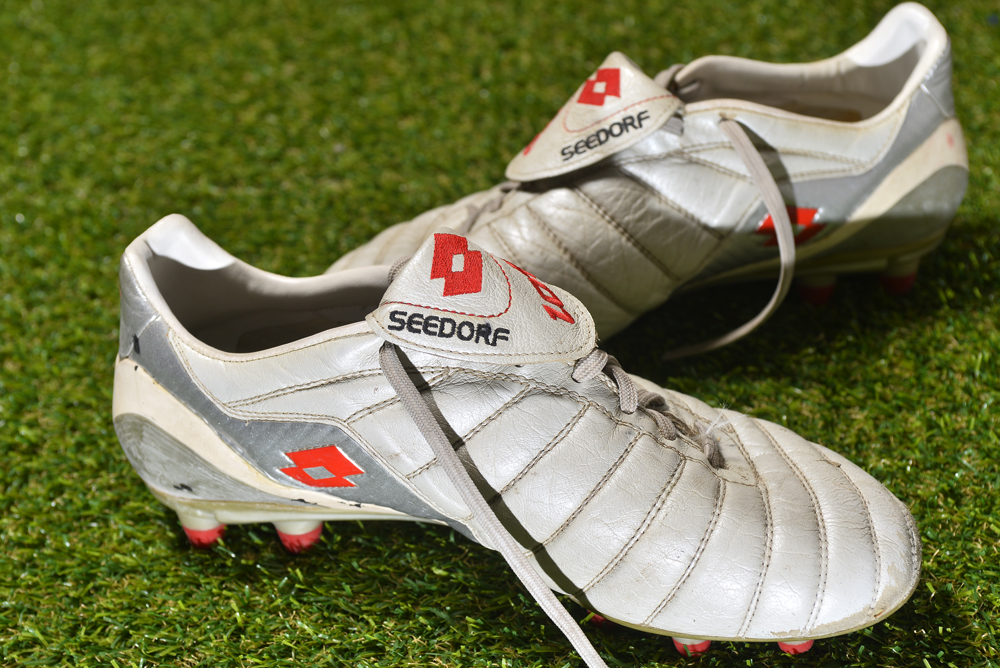 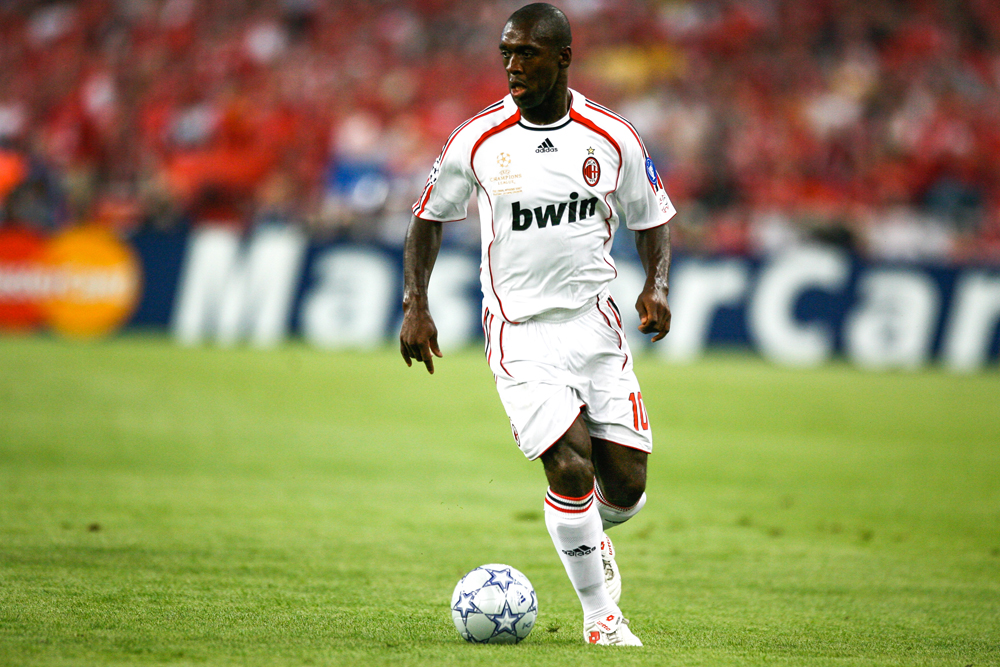 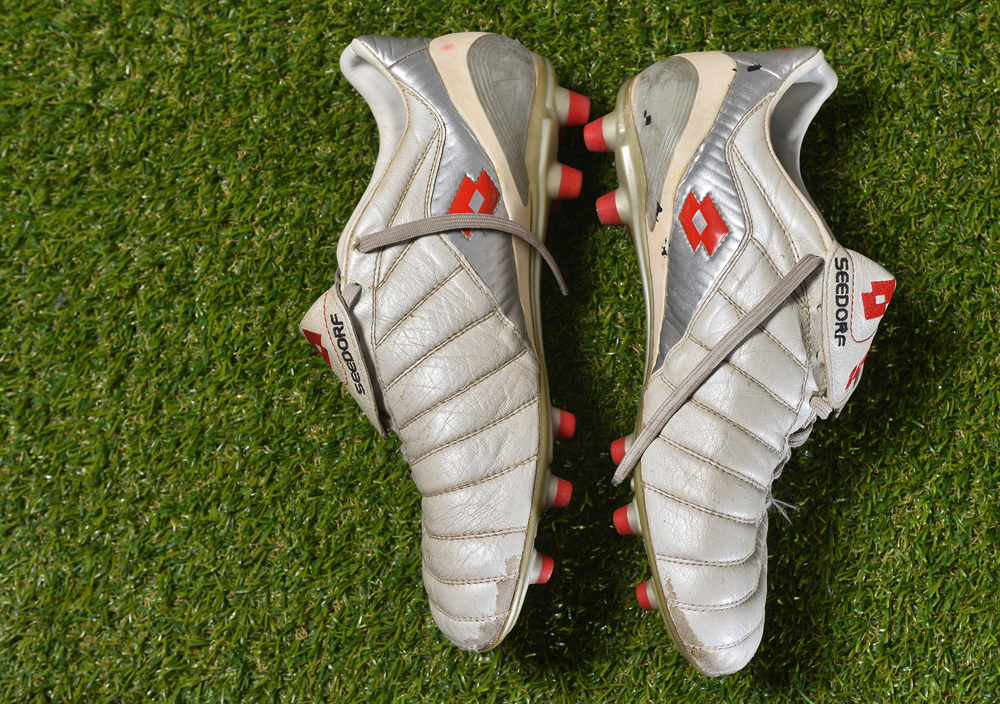 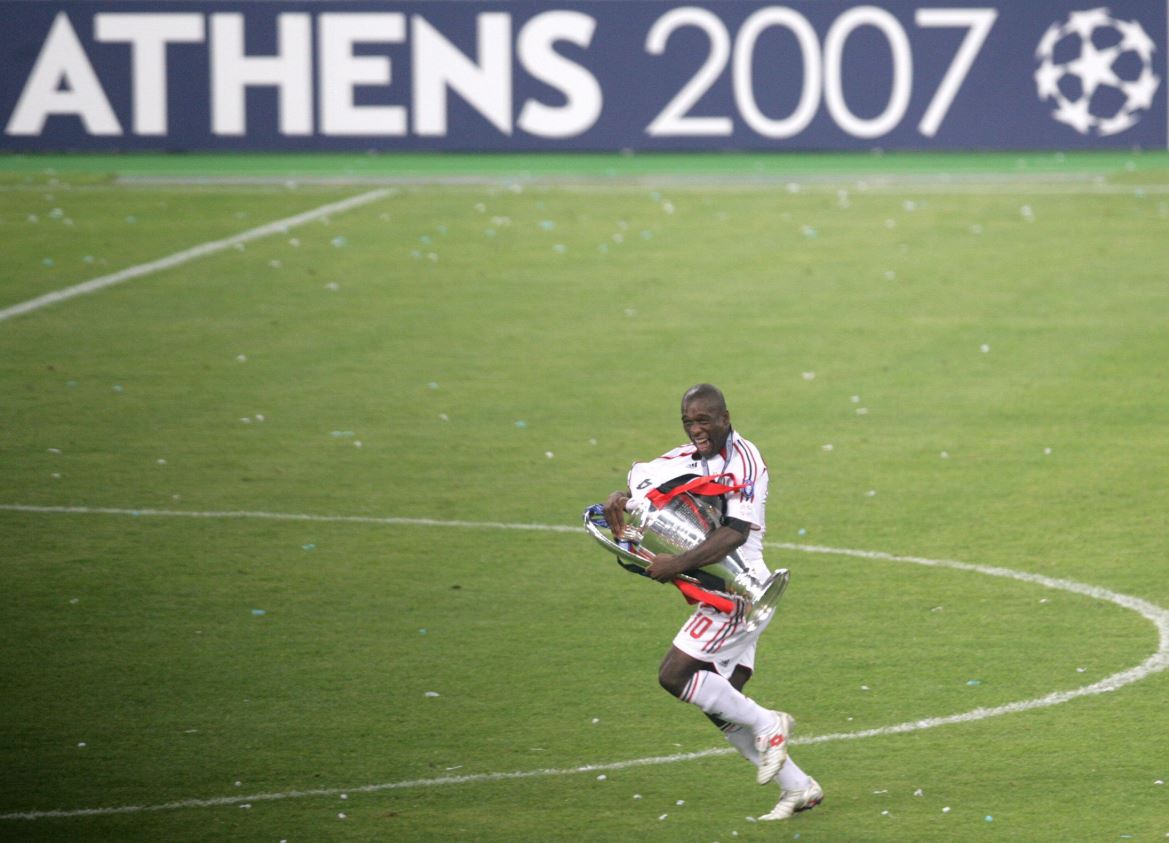 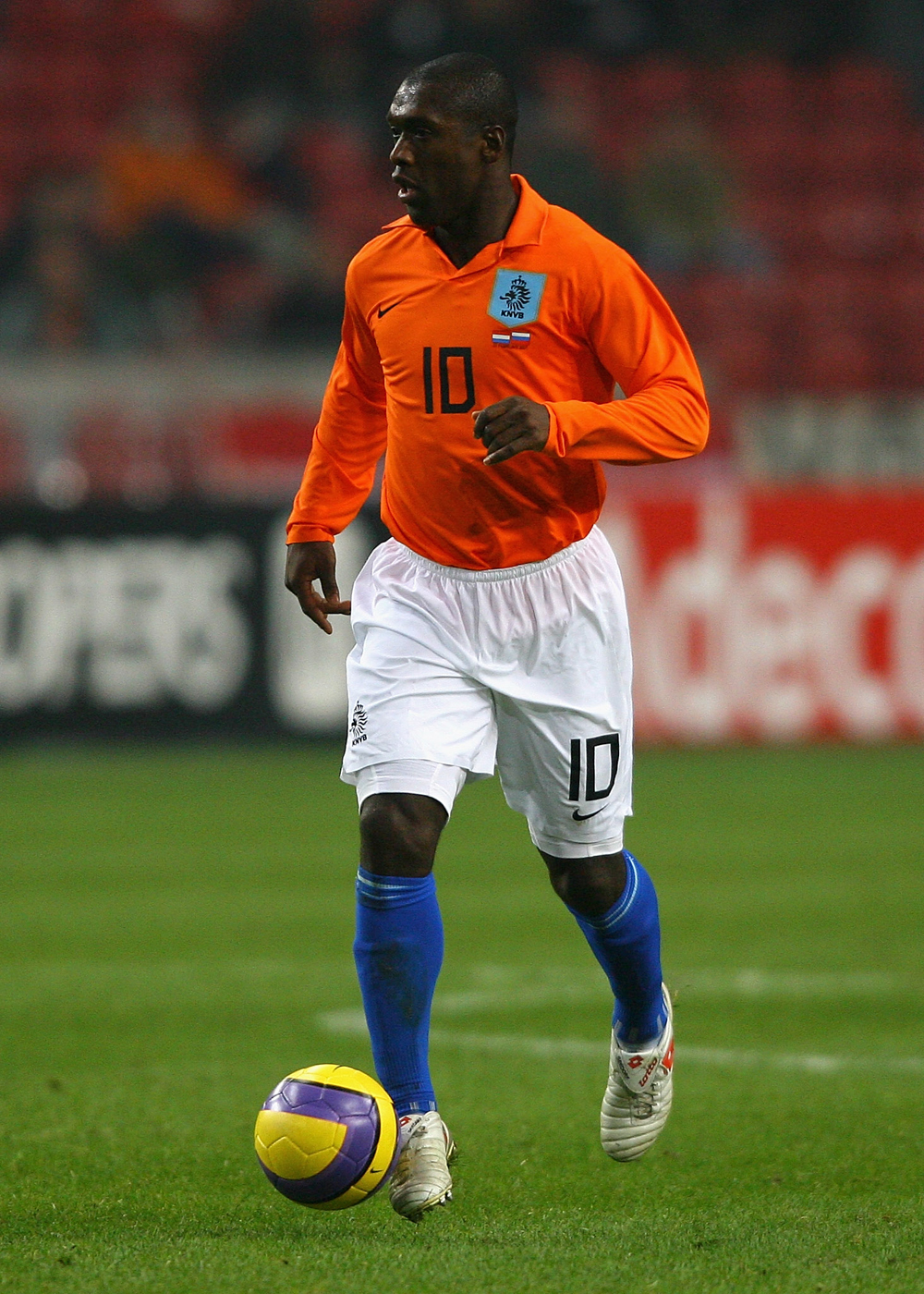 These boots were worn by Clarence Seedorf during the season 2006/2007 with A.C.Milan and Netherlands National team. The same model of boots were worn by him during the Champions League Final 2007 game between A.C.Milan and Liverpool F.C. which took place in Athens, “Olympic Stadium”, on May 23rd 2007. After two years with Inter, Seedorf moved to their city rivals A.C. Milan in 2002, in an exchange with Francesco Coco. Seedorf won the Coppa Italia with Milan in 2003, the first time they had won the competition in 26 years. In the same season, Seedorf gained his third Champions League medal, becoming the first player to win the Champions League with three clubs. The all-Italian final saw Milan beat Juventus on penalties after a 0–0 draw, despite Seedorf failing to convert his own penalty. The following season, 2003–04, Seedorf played a role in the Milan side that won the Serie A title. It was Seedorf’s fourth national league title of his career, following his two Dutch title wins with Ajax and his one Spanish win with Real Madrid. Seedorf played a major role as Milan reached the Champions League final again in 2005, scoring the only goal of the game in their opening group match against Shakhtar Donetsk on 14 September 2004 and appearing in all 13 competition matches. He started the match against Liverpool in Istanbul in which Milan lost a 3–0 lead, eventually losing on penalties after a 3–3 draw; Seedorf did not take a penalty-kick. Milan also finished runners-up in the Serie A, seven points behind champions Juventus, although Juventus were stripped of the title and Milan docked points for match-fixing. A match-fixing scandal tarnished Serie A and Milan were weakened by the scandal but were allowed to continue in Europe the following season, which led to their top players remaining with the club. In that season, 2005–06, he scored a goal after just 25 seconds in a 2–2 draw against Schalke. Seedorf’s role as foil to midfielder Kaká became increasingly impressive as the pair combined in style to score and supply the goals which drove Milan past Bayern Munich and Manchester United to another Champions League final, again against Liverpool. This time, however, they defeated them 2–1 in Athens, with Seedorf collecting his fourth Champions League medal. In that same year, Seedorf was a part of the Milan squad that won the 2007 FIFA Club World Cup, becoming the first European player to win the trophy with three clubs (Ajax in 1995 and Real Madrid in 1998). He ended up winning the Silver Ball for the competition for his performances, notably scoring the winner against Urawa Red Diamonds in the semi final to send his club to the final. At the end of the 2006–07 season, Seedorf was voted best midfielder of the Champions League. He played his 100th game in the Champions League on 4 December against Celtic. With Milan, Seedorf formed a formidable midfield partnership with Gennaro Gattuso and Andrea Pirlo, which began since the 2002–03 season. This midfield trio was still used in the starting line-up until the 2011–12 season (Pirlo left the Rossoneri in the summer of 2011), although their form had been declining. Under the guidance of coach Carlo Ancelotti, their role was to support an attacking midfielder, whether it be Rivaldo, Rui Costa, Kaká or Ronaldinho. Seedorf became the foreigner with the most appearances for Milan following a game against his former club, Sampdoria, which he scored in. At 395 appearances, he passed Nils Liedholm for this historic milestone. During the Sampdoria game, he also became the ninth-highest scoring foreigner for Milan, with 58 goals. On 29 March 2010, Seedorf was the target of racist chants from Lazio fans in a 1–1 draw, which led to the Rome-based club being given a €15,000 fine by the Italian Football Federation (FIGC). This led the Italy’s players’ union want racism stamped out in Serie A. Seedorf won his second Scudetto with Milan in the 2010–11 Serie A season, where he once again played a vital role. He scored four goals and made 36 appearances in the 2010–11 season. Seedorf added yet another medal to his trophy cabinet in the first official game of the 2011–12 season, where he played the full 90 minutes in a 2–1 comeback win over rivals Inter Milan in the Supercoppa Italiana. He scored the winning goal of Milan’s first win of the 2011–12 Serie A campaign, a 1–0 defeat of Cesena on 24 September. Seedorf was ranked seventh of the 20 best players of the Champions League, a list which was compiled in 2012 to commemorate the 20th anniversary of the competition. The ranking was done by Champions, the official magazine of UEFA. On 14 May, he said that he was playing his last match with Milan against Novara that day. He also confirmed that he would continue to play football for another club. On 21 June, Seedorf held a press conference announcing his departure from Milan, stating, “I am leaving after 10 wonderful years… I leave a family” after playing for the Rossoneri for a decade and winning two Champions League, two Scudettos and a Coppa Italia. Club CEO Adriano Galliani spoke of Seedorf following the player’s departure in the highest regard, stating, “When Milan played well, which happened often, each and every time it occurred Seedorf played an amazing match. He is a world class player.” 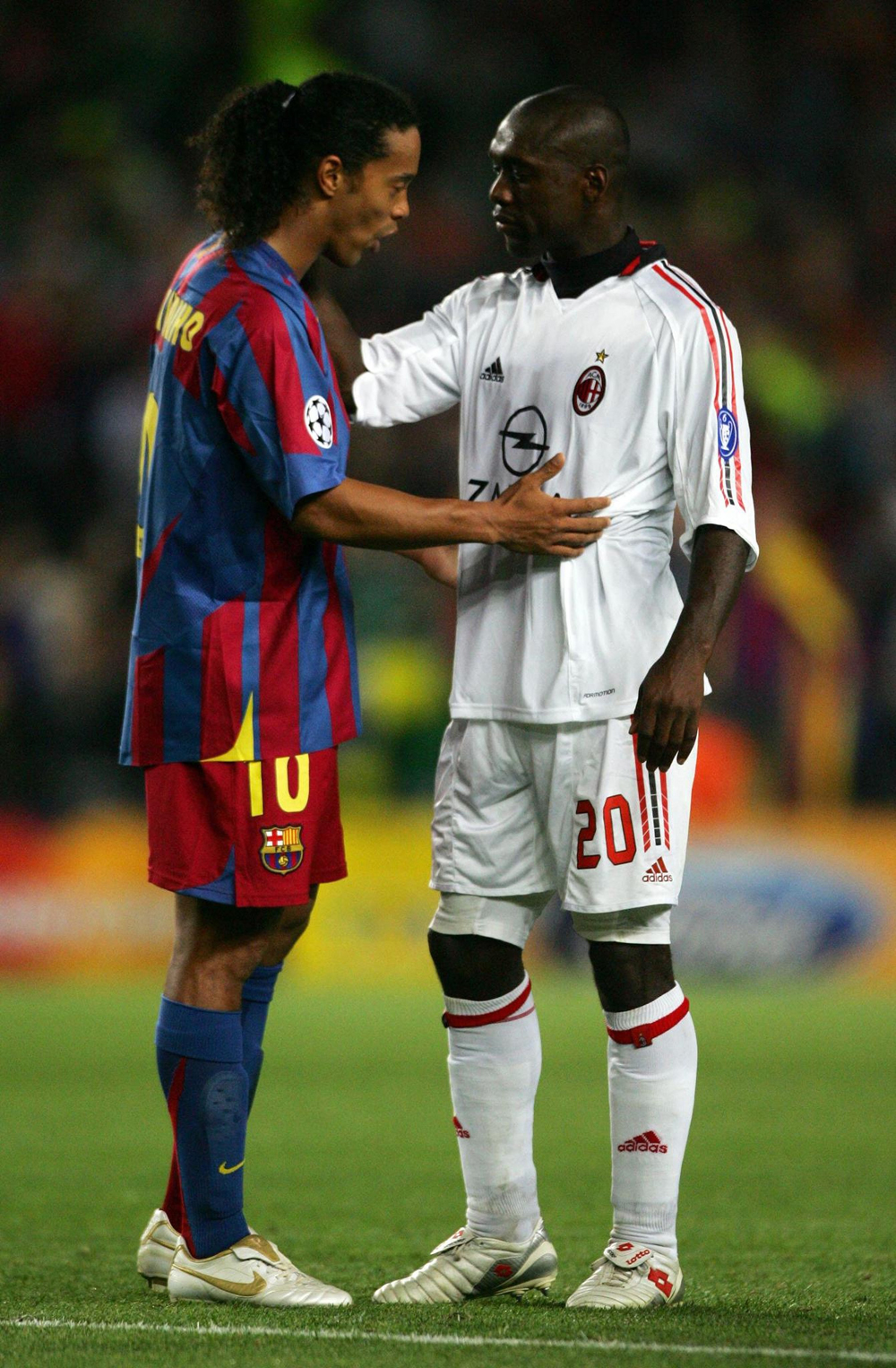 Grosso Grosso2021-01-01T14:13:00+00:00
Page load link
This site uses cookie technology, including third parties' ones. If you want to know more click here. If you access any element of this site outside this banner, you consent to the use of cookies. Ok
Go to Top