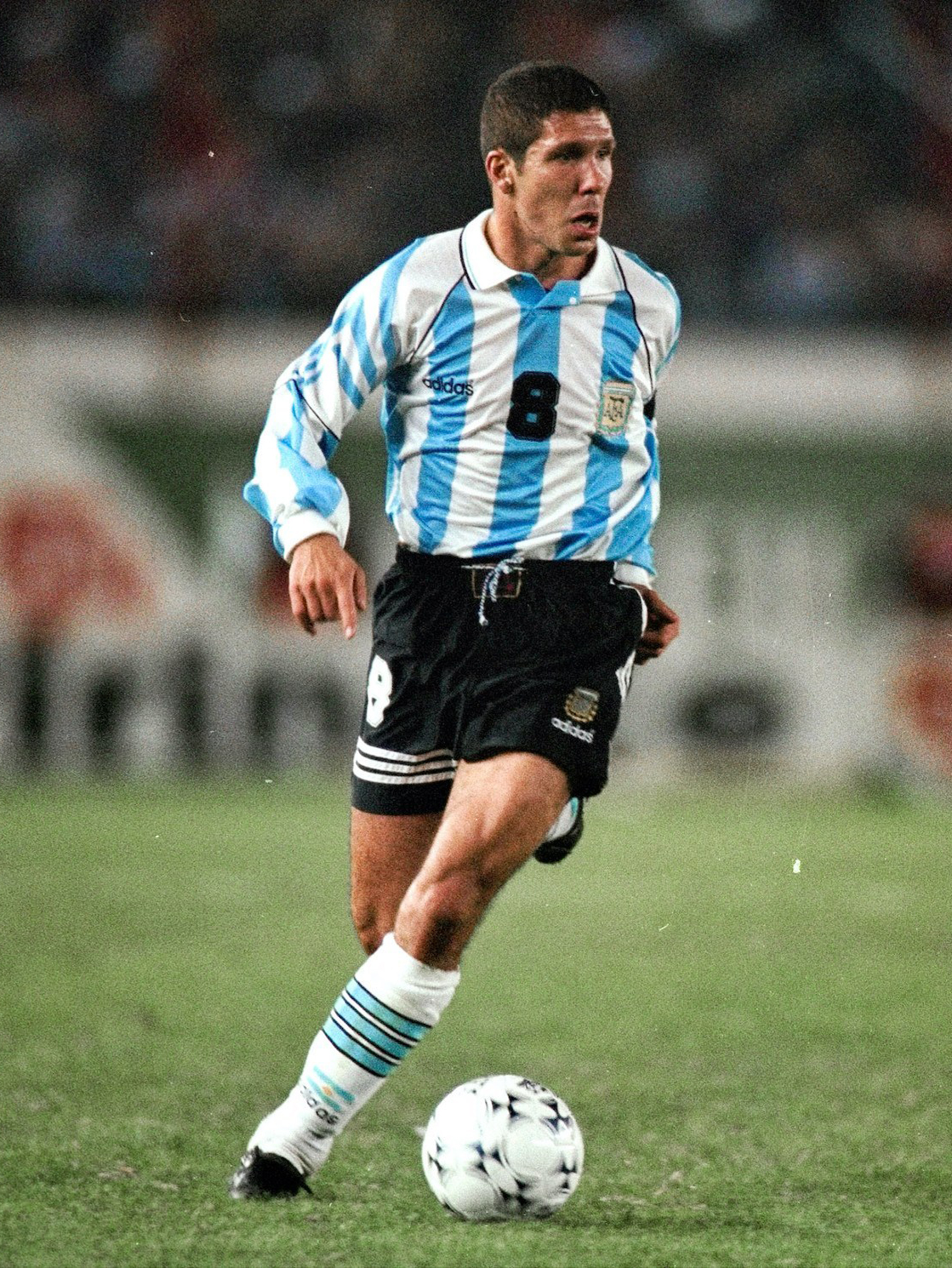 Diego Pablo Simeone González, also known as El Cholo ([el ˈtʃolo]), is an Argentine football manager and former player, who played as a midfielder; he has been the manager of Atlético Madrid since December 2011. Simeone is often considered to be a legendary figure in the history of Atlético Madrid, due to his achievements as a player and manager with them. In his club career that started in 1987, Simeone played in Argentina, Italy, and Spain for Vélez Sarsfield, Pisa, Sevilla, Atlético Madrid, Inter Milan, Lazio and Racing Club. He won a domestic double with Atlético Madrid in 1996, and the UEFA Cup with Inter in 1998, also winning another domestic double with Lazio in 2000, as well as the 1999 UEFA Super Cup and the 2000 Supercoppa Italiana. Simeone was capped over 100 times for the Argentina national team and represented the country at the 1994, 1998 and 2002 FIFA World Cups, and in four editions of the Copa América, winning the tournament in 1991 and 1993. He also won the King Fahd Cup in 1992, and a silver medal at the 1996 Summer Olympic games. As a manager, Simeone has coached Argentine sides Racing Club, Estudiantes de La Plata, River Plate, San Lorenzo and Italian club Catania before joining Spanish club Atlético Madrid in 2011. He won the Argentine Primera División both with Estudiantes and River Plate, and has had his biggest managerial success with Atlético Madrid, winning La Liga, the Copa del Rey, two UEFA Europa Leagues, two UEFA Super Cups, and also being runner-up of the UEFA Champions League twice. 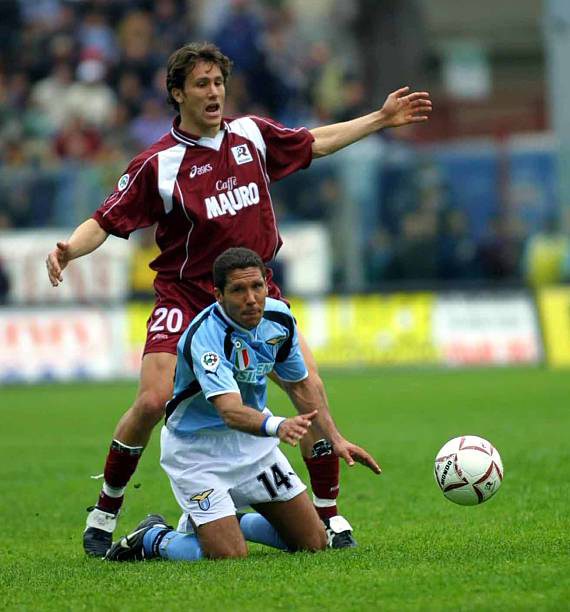 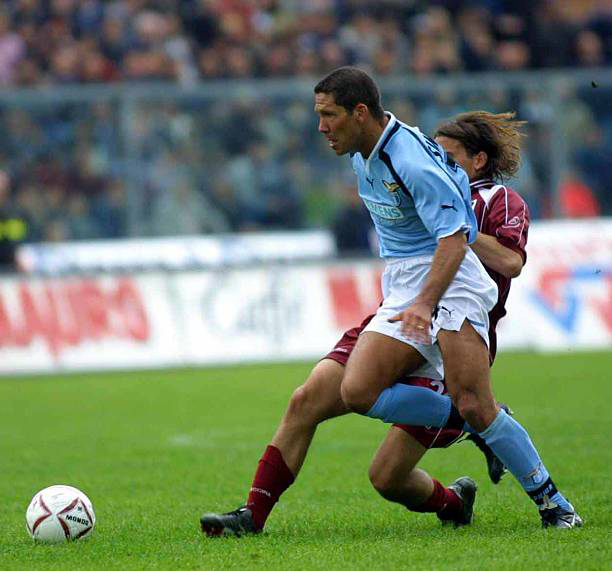 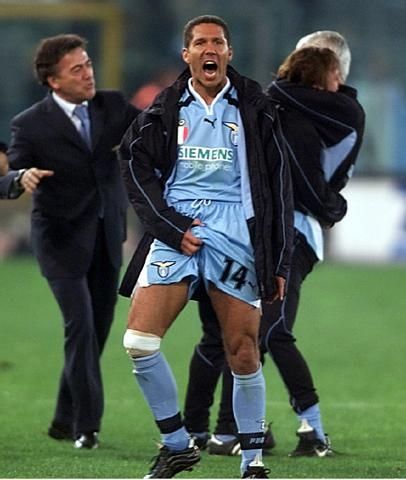 This shirt was worn by Diego Simeone during Reggina vs Lazio which took place in Reggio Calabria, “Oreste Granillo” Stadium, on April 14th 2001. Lazio defeated Reggina 2-0 and Simeone swapped his shirt after the game with a Reggina’s player who we got it from. This style of shirt was only used by the team in the second part of the season starting January 2001. Until December the team wore the white centenary’s kit that used from January to December 2000. 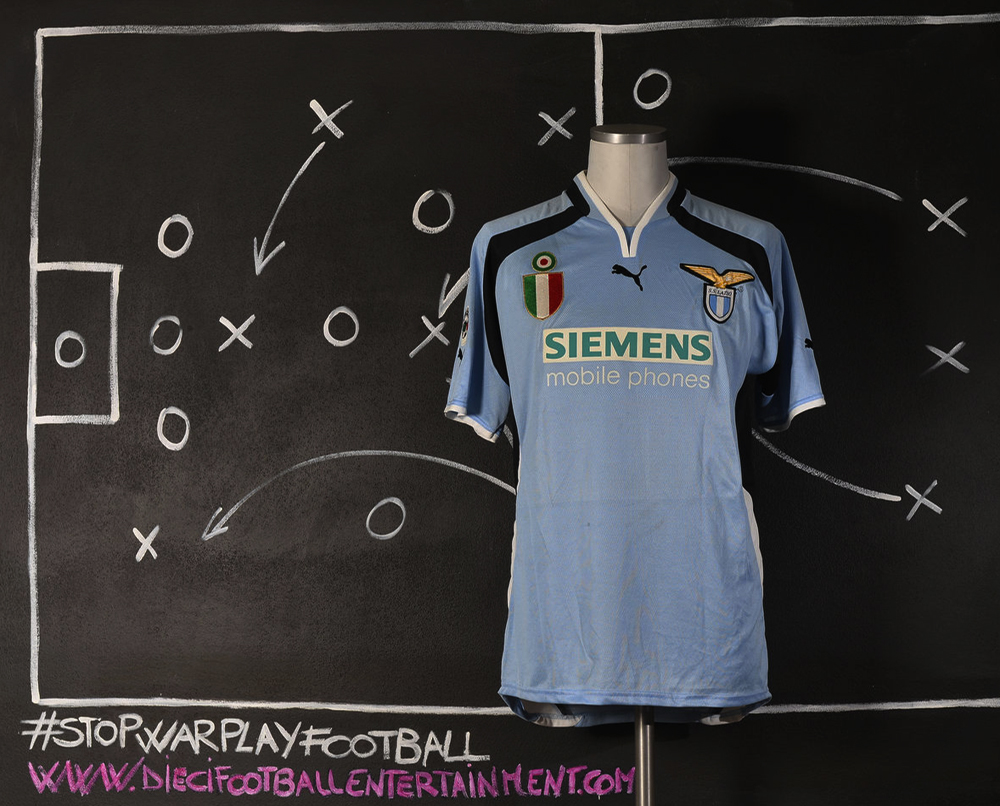 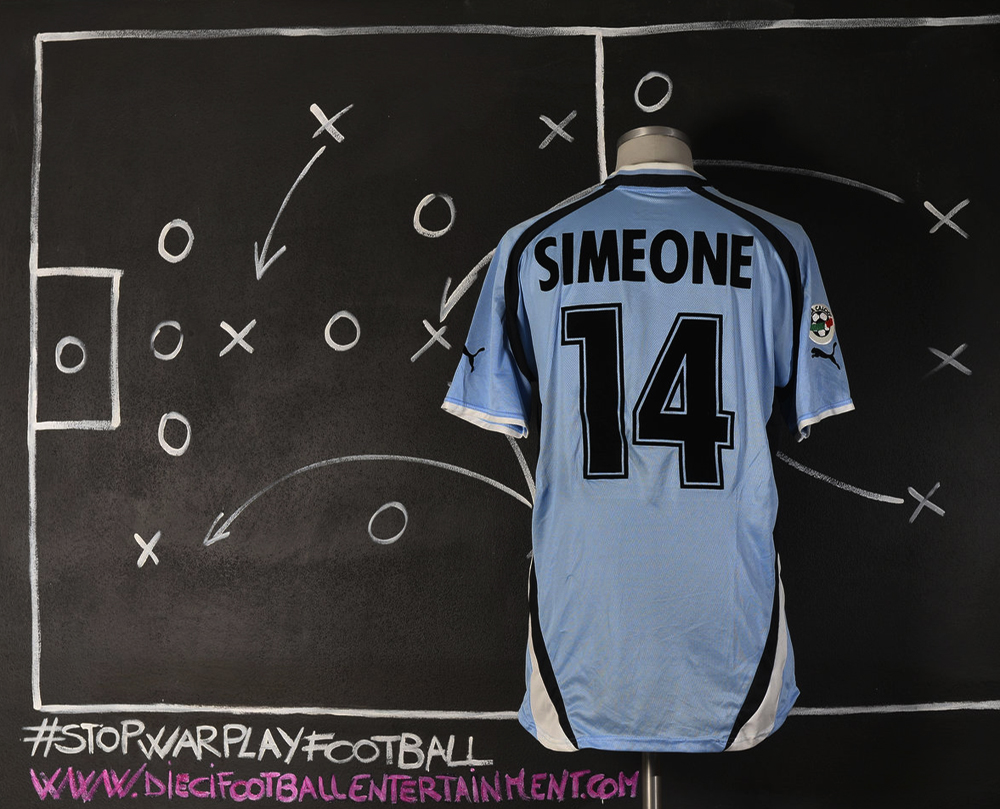 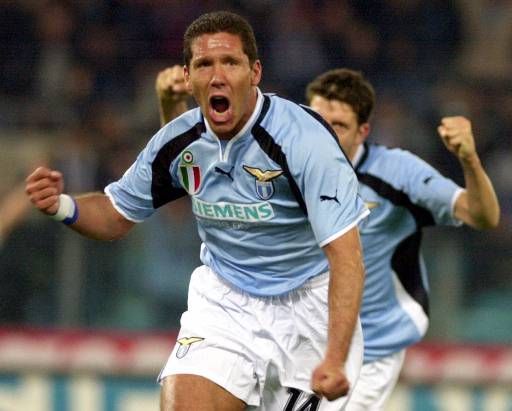 In 1999, Simeone joined fellow Argentines Néstor Sensini, Matías Almeyda, Hernán Crespo and Juan Sebastián Verón at Sven-Göran Eriksson’s Lazio. The side had gone close to the Scudetto in the season before Simeone’s arrival and he helped deliver the championship after a season, where Juventus led the standings by two points going into the last day. A Juve loss at rainy Perugia coupled with Lazio’s comfortable home win over Reggina at the Stadio Olimpico ensured Simeone’s first Serie A title. After winning the double in Spain, he would then add the Italian double as Lazio edged out Inter to claim the 1999–2000 Coppa Italia. He went on to play three more seasons in Rome, which included more last day drama as Simeone’s goal against former club Inter on the last day of the 2001–02 campaign effectively ruined his old employers’ title dream. 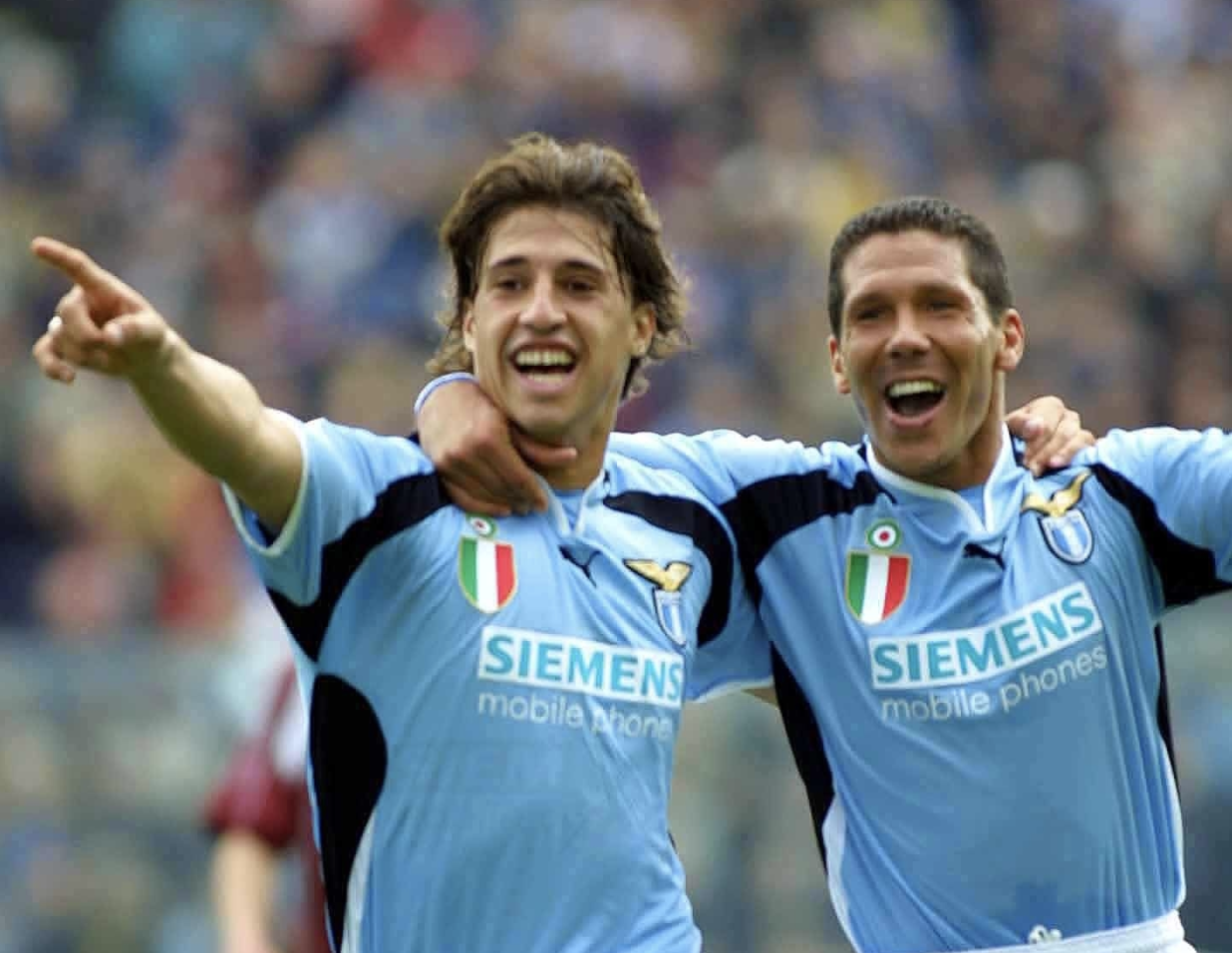 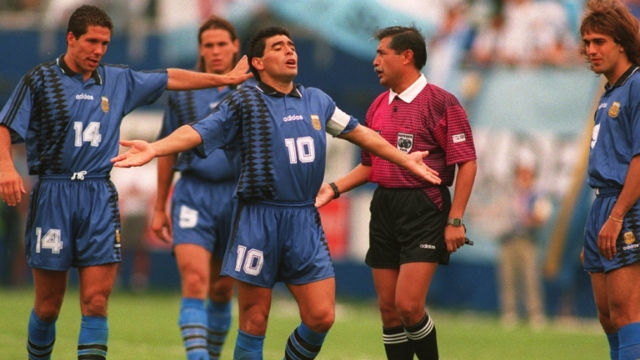 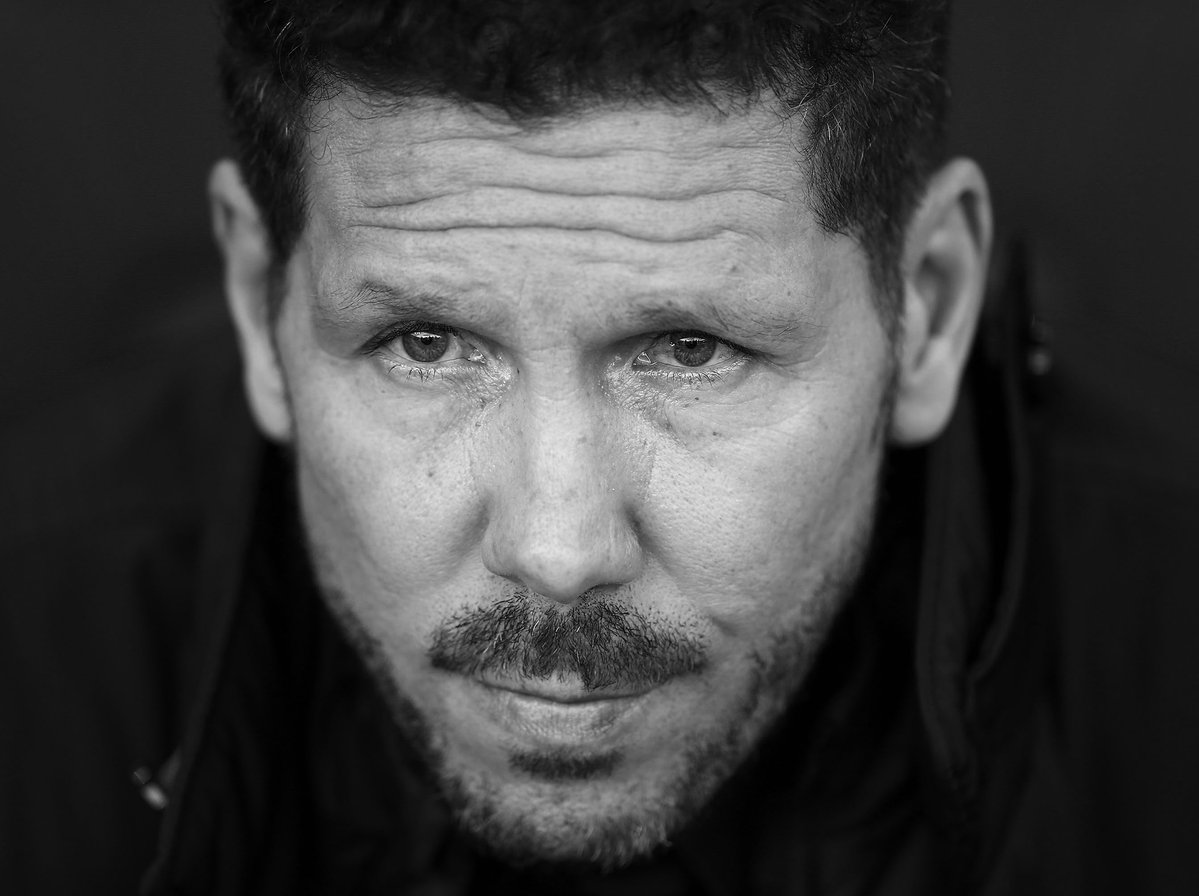 “The players would die for him. He gives belief that we can compete against much bigger teams. We have great confidence in him, we are with him to the death and also he with us – and that shows on the pitch. I believe the whole team has confidence in the coach and we all know the path we have to take: he marks the way for us and we go with him until the death. That is how you achieve things” [Diego Godin]

Simeone was regarded as a tenacious, versatile, hard-working and complete two-way midfielder who was mobile, good in the air and capable both of winning balls and starting attacking plays, also having a penchant for scoring several goals himself. This enabled him to play anywhere in midfield throughout his career, although he was usually deployed in the centre in a box-to-box or defensive midfield role. He was also used in an offensive midfield role on occasion. A talented yet combative player, he was primarily known for his leadership, tactical versatility, intelligence, strength and stamina, although he was also praised by pundits for his technique, vision and passing range. Simeone once described his style as “holding a knife between his teeth”. His main inspirations as a player were Brazilian midfielder Falcão and German midfielder Lothar Matthäus. Simeone ended his playing career for Racing Club, playing his last match on 17 February 2006, and then became manager for the same team. After a rough start, the team made an impressive finish in the 2006 Clausura. When a new club president was elected, Simeone left Racing in May 2006 and was replaced by Reinaldo Merlo. Simeone’s preferred formation is the 4–4–2, which he first practiced when he was manager of Estudiantes de la Plata in 2006. In this formation, the two wingers move inside and act like attacking midfielders, creating space for the full backs and fluidity in the attack, effectively being a 4–2–2–2 when the team is on the offensive. The two holding midfielders provide the defensive muscle needed to win midfield battles. Utilizing this formation, Simeone’s Estudiantes won the 2006 Apertura by beating Boca Juniors 2–1 while being down to ten men from the first half. It is essentially this formation that Simeone also utilizes at Atlético Madrid. Simeone has listed his coaching influences being Marcelo Bielsa, Sven-Göran Eriksson, Alfio Basile, Victorio Spinetto, Luigi Simoni, Carlos Bilardo and Radomir Antić. Simeone’s sons Giovanni and Gianluca are professional footballers, currently playing for Fiorentina and Gimnasia y Esgrima respectively. His third son, Giuliano, has been seen as a ball-boy for Atlético Madrid. 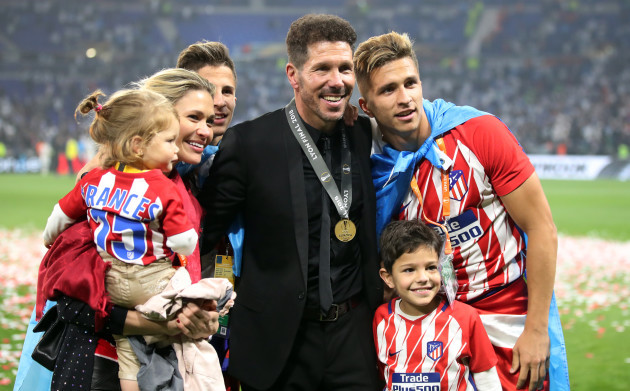 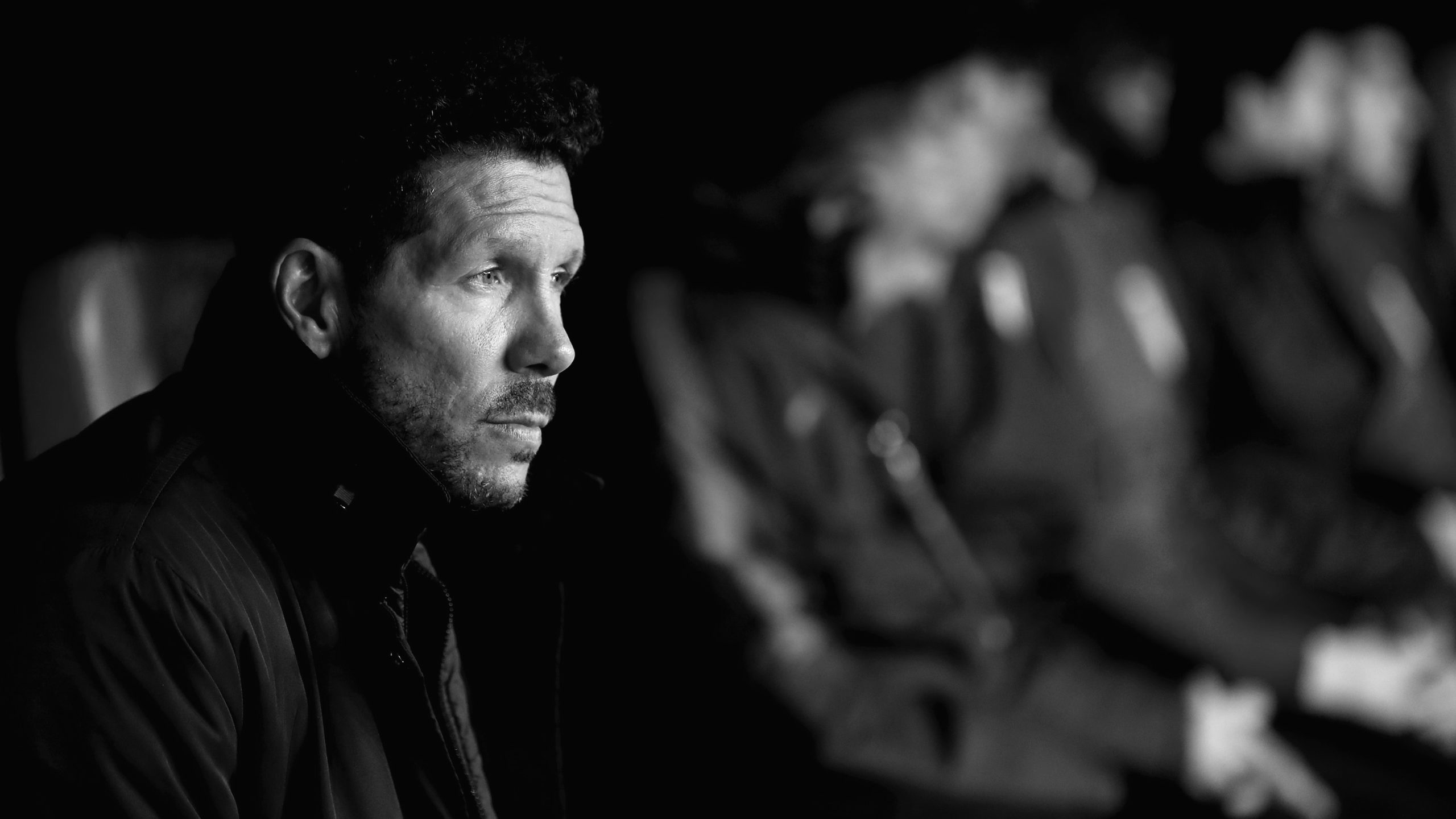 Grosso Grosso2020-05-15T09:47:29+00:00
Page load link
This site uses cookie technology, including third parties' ones. If you want to know more click here. If you access any element of this site outside this banner, you consent to the use of cookies. Ok
Go to Top