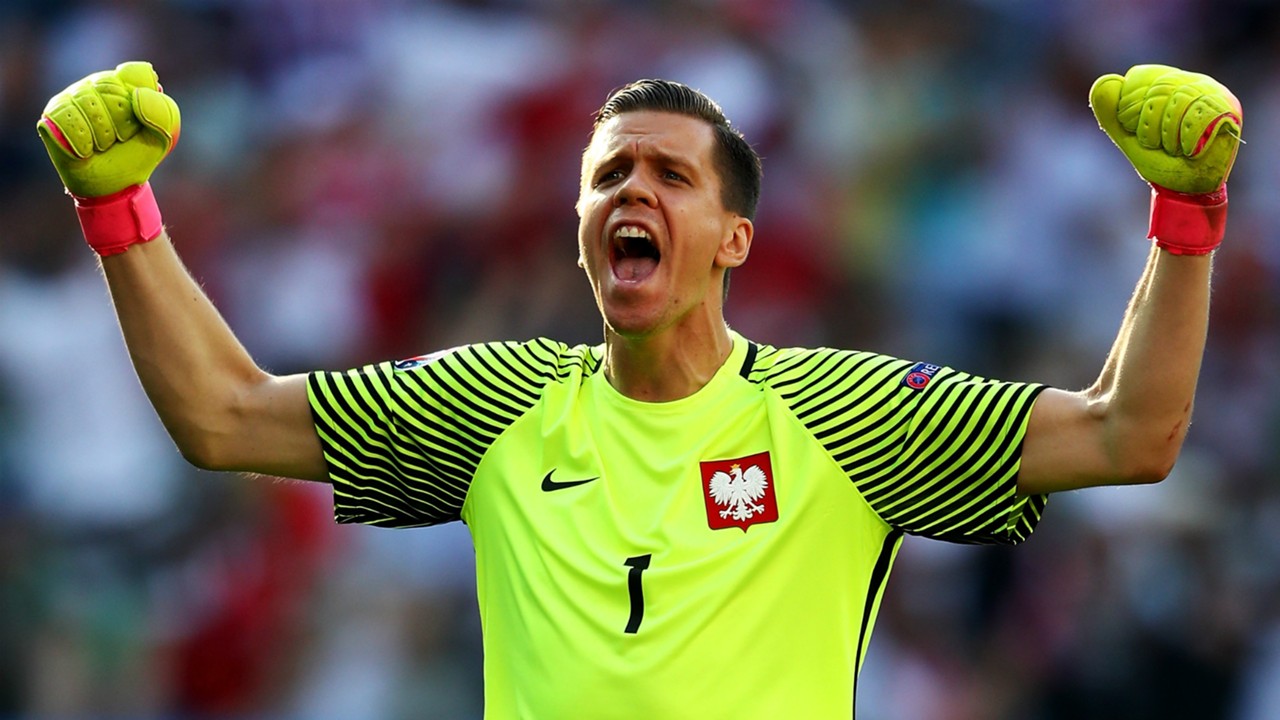 Wojciech Tomasz Szczęsny is a Polish professional footballer who plays as a goalkeeper for the Poland national team. After starting his career at Legia Warsaw, Szczęsny signed for Arsenal in 2006, where he made his professional debut in 2009. He later became the club’s first choice goalkeeper, winning two FA Cups and being the joint recipient (with Petr Čech) of the 2013–14 Premier League Golden Glove. Szczęsny has earned more than 30 caps for Poland from his debut in 2009 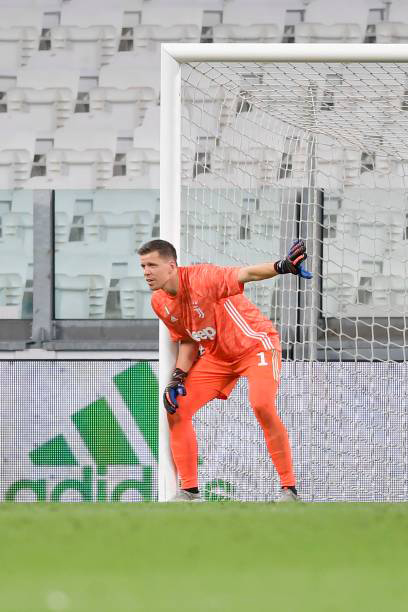 This shirt was worn by Wojciech Szczesny during the Serie A game between Juventus and Lazio which took place in Torino, “Allianz Stadium”, on July 20th 2020. Juventus defeated Lazio 2-1. Szczęsny was signed by Juventus on July 19th 2017 for a €12.2 million initial fee (plus an additional €3.1m in conditional bonuses) on a four-year contract. Upon Buffon’s return to Juventus in the summer of 2019, Szczęsny offered him the number 1 shirt, but Buffon turned it down, saying “I didn’t come back to take something from someone or take it back. I just want to do my bit for the team. It’s only right that the starting goalkeeper, Szczesny, has the number 1 jersey”. Instead, Buffon chose to wear number 77, the same number he had worn during his final season at Parma before initially joining Juventus in 2001. On 26 July 2020, he kept a clean-sheet in a 2–0 home win over Sampdoria, which allowed Juventus to clinch the Serie A title. For his performances, he was named the Best Goalkeeper of the season by Lega Serie A. 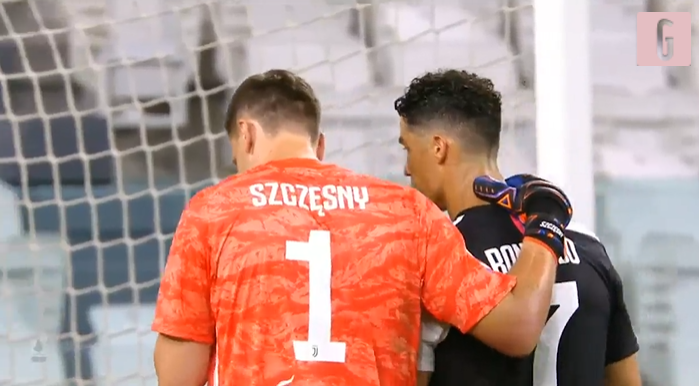 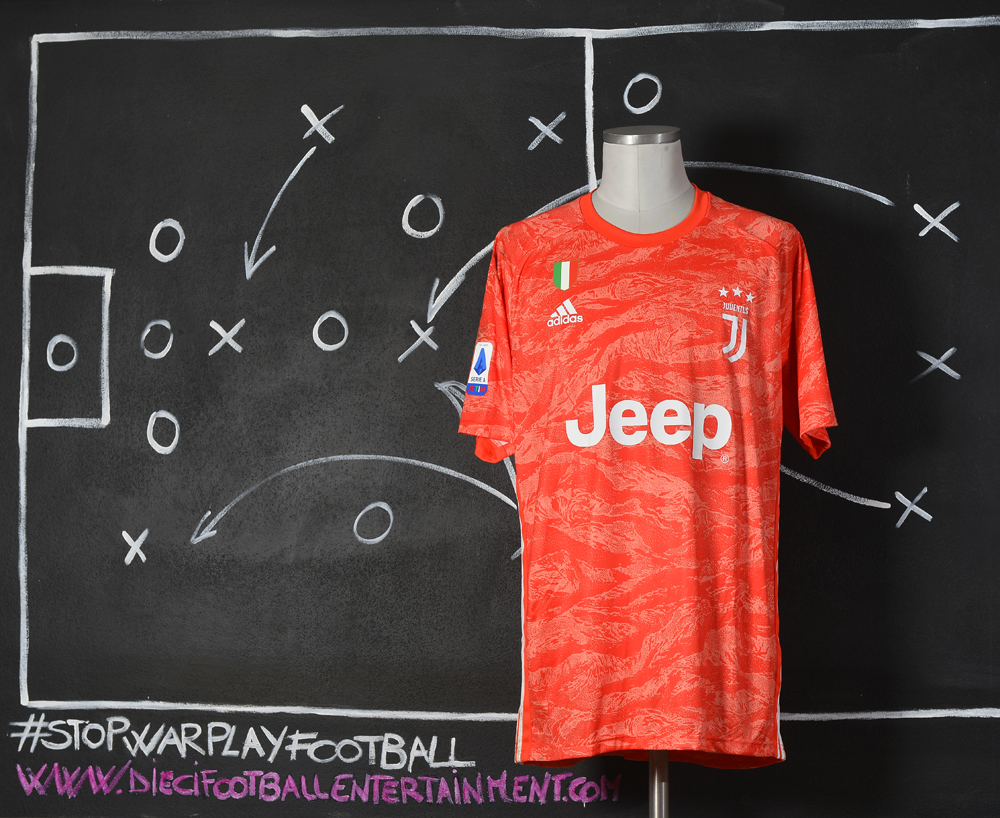 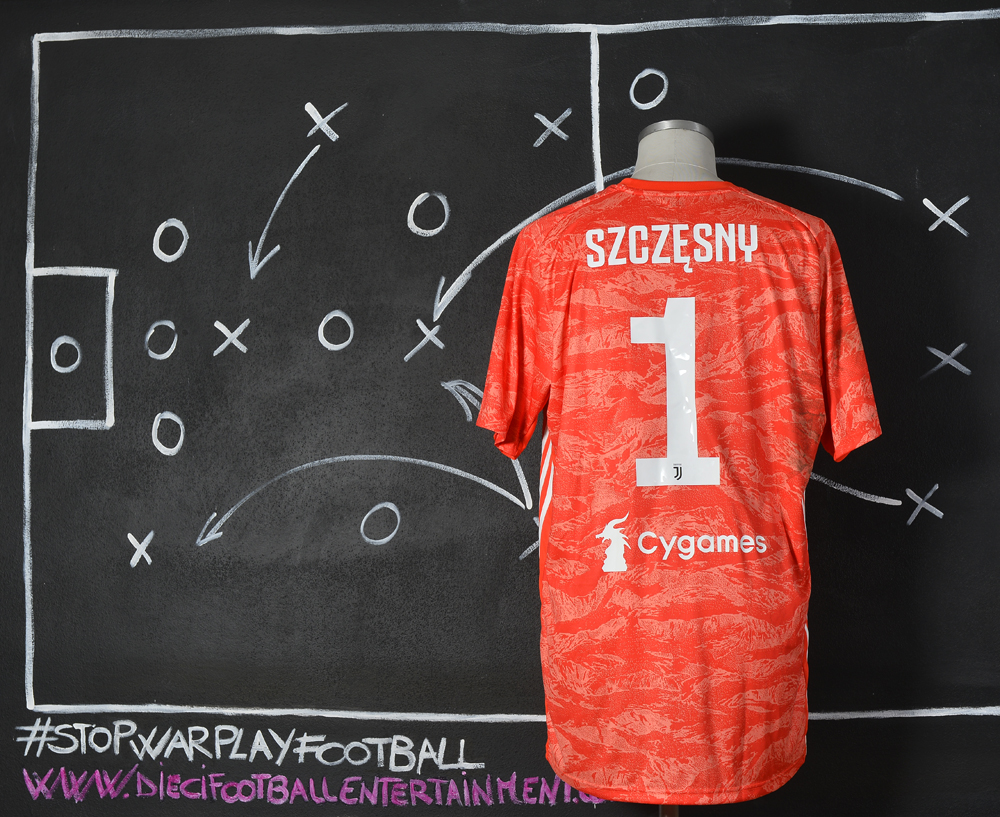 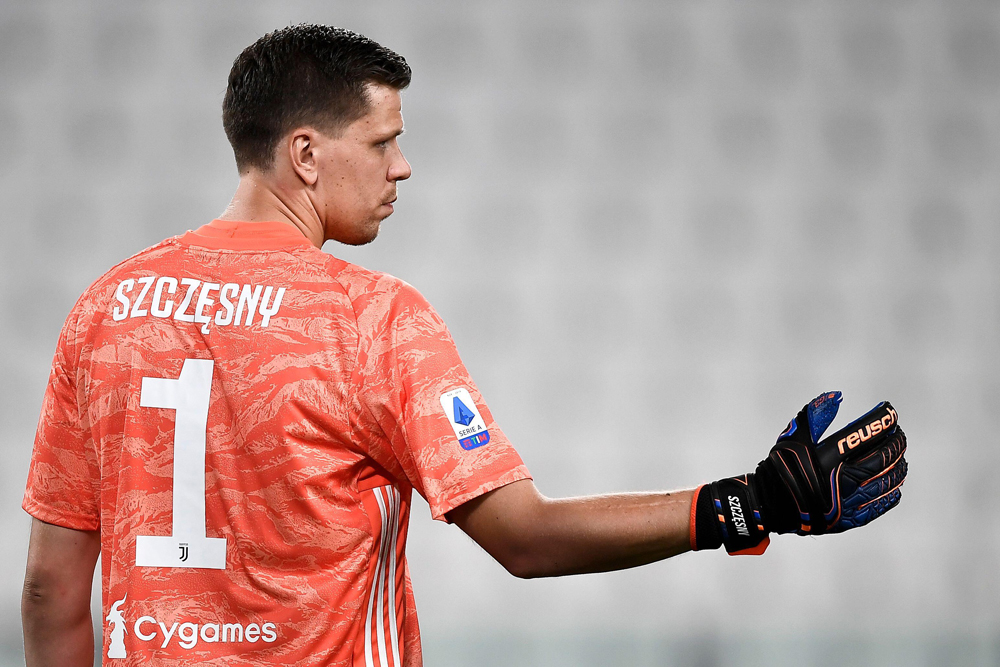 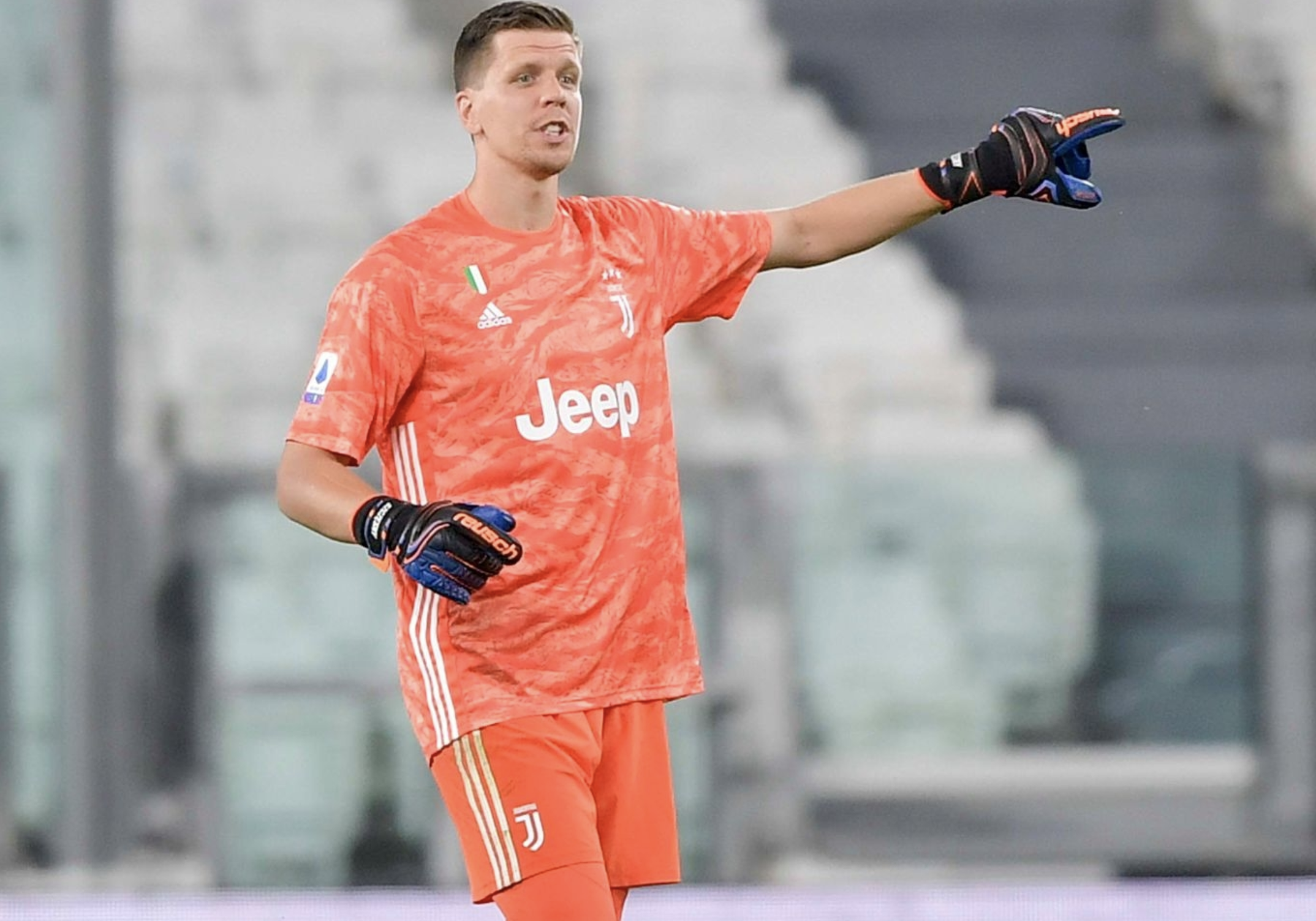 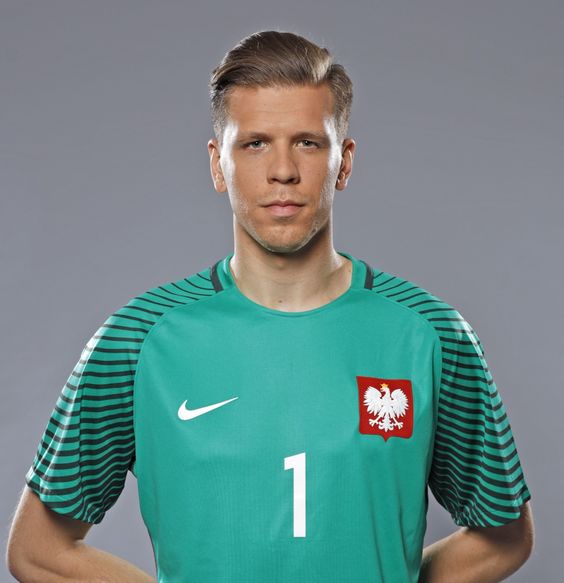 Szczęsny was born in Warsaw. He is the son of Maciej Szczęsny, who was also a professional goalkeeper, having played for Legia Warszawa, Widzew Łódź, Polonia Warsaw and Wisła Kraków, along with seven games for the Poland national team. In October 2009, new manager Franciszek Smuda sent Szczęsny his first call up to the full national side, for the friendly matches against Romania and Canada. He made his debut against Canada on 18 November, coming on as a half-time substitute for Tomasz Kuszczak in a 1–0 victory at the Zdzislawa Krzyszkowiaka Stadium in Bydgoszcz. He earned his second cap and his first full match on 9 February 2011, in another friendly win of the same score, against Norway at the Estádio Algarve. Szczęsny had a strong performance against Germany on 6 September 2011, making eight critical saves in a 2–2 draw; this earned him praise from former German international goalkeeper Oliver Kahn. He was sent off in the opening game of Poland’s co-hosting of UEFA Euro 2012 against Greece, for a professional foul on Dimitris Salpingidis, costing Poland a penalty which was saved by Przemysław Tytoń in a 1–1 draw. Szczęsny failed to play again for the rest of the tournament as Tytoń played the remainder as Poland finished bottom of Group A with two points. On 12 October 2014, Szczęsny was pivotal in securing his country’s historic first victory over Germany in a Euro 2016 qualifier. He played in his nation’s opening game of the tournament against Northern Ireland. He kept a clean sheet in his nation’s first ever win at a European Championship, but suffered an injury, which kept him out of the rest of their campaign. Poland nonetheless made it to the quarter-finals, with former Arsenal teammate Łukasz Fabiański in goal.

On 29 July 2015, with his opportunities further limited by Arsenal’s signing of Petr Čech earlier that summer, Szczęsny joined Roma on a season-long loan. He made his Serie A debut on 22 August in a 1–1 draw at Hellas Verona. Szczęsny dislocated a finger during Roma’s opening Champions League match against Barcelona after clashing with Luis Suárez, an injury that kept him out for six weeks. In December, he was dropped for Morgan De Sanctis for a league game against Atalanta after again being caught smoking following a 6–1 loss to Barcelona. In total, he made 31 league appearances throughout the season, as Roma finished the 2015–16 season with a third place in the league, clinching the last available Champions League qualifying spot. In an interview with Il Tempo newspaper, Szczęsny stated that he felt that his season with Roma had been positive, and credited his experience training and playing in Italy under manager Luciano Spalletti and goalkeeper coach Nanni as being extremely beneficial to his development. A second season-long loan to Roma was agreed by Arsenal, ahead of the 2016–17 season. In his second season in the Italian capital, Szczęsny kept the most clean sheets in Serie A (14), helping Roma to set a club seasonal record of 87 points, and earn a second-place finish in the league. In total, he made 72 appearances in Serie A over the course of his two seasons with Roma. On 19 July 2017, Szczęsny was signed by Juventus for a €12.2 million initial fee (plus an additional €3.1m in conditional bonuses) on a four-year contract. Although it was reported that Szczęsny would initially serve as a back-up to Gianluigi Buffon under manager Massimiliano Allegri, the latter goalkeeper’s intention to retire at the end of the 2017–18 season saw Szczęsny labelled as a potential long-term replacement for Buffon in the media. On 9 September 2017, Szczęsny made his first appearance for Juventus, achieving a clean sheet as he started in their third match of the season, a 3–0 home win over Chievo in Serie A. 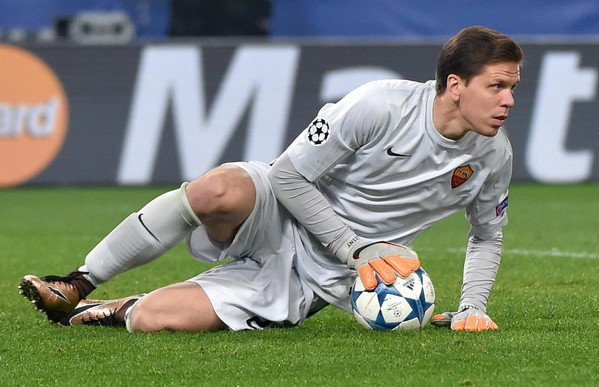 Grosso Grosso2022-04-24T06:42:42+00:00
Page load link
This site uses cookie technology, including third parties' ones. If you want to know more click here. If you access any element of this site outside this banner, you consent to the use of cookies. Ok
Go to Top