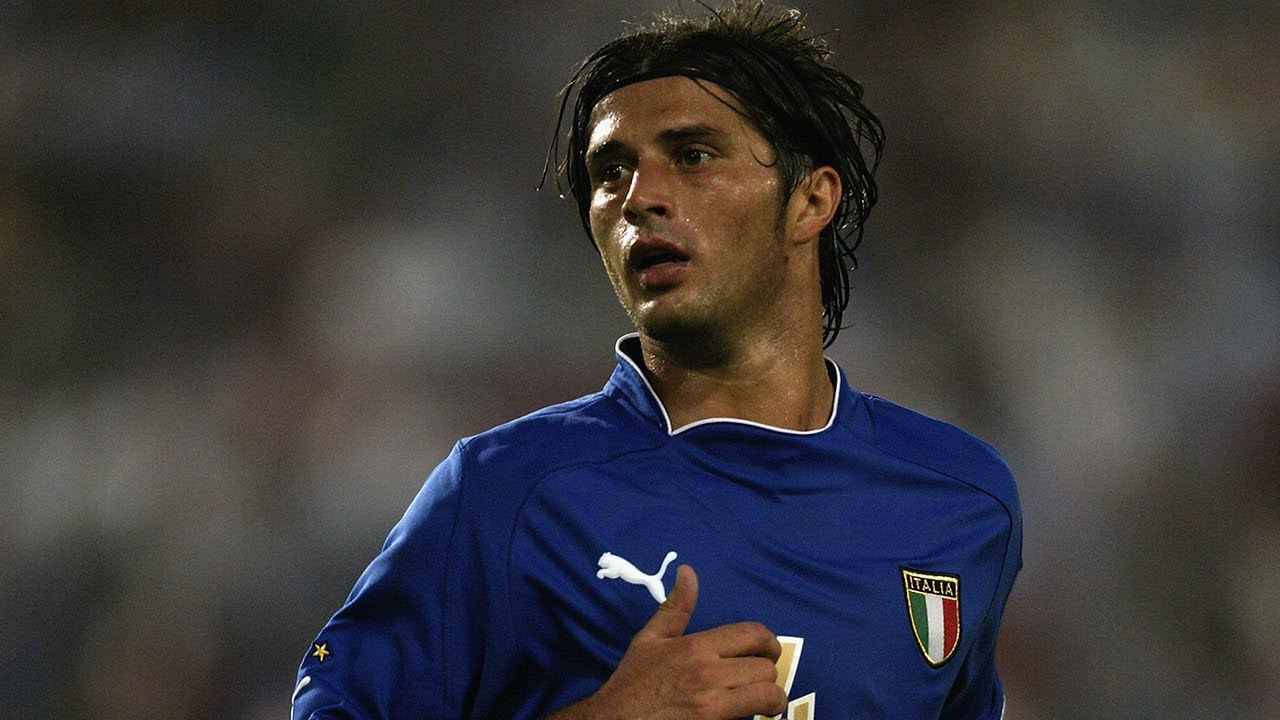 Alessio Tacchinardi is an Italian former footballer who played as a defensive midfielder. He began his career with Atalanta. In 1994, he moved to Juventus, where he spent the majority of his career, winning 17 trophies; due to his success and performances with the club, Tacchinardi was one of the 50 Juventus players to have their names written inside the club’s new home ground, the Juventus Stadium. Following a two-year loan spell with Spanish side Villarreal, he moved to Brescia in 2007, where he retired after a season. A former Italy international, Tacchinardi represented his nation on 13 occasions between 1995 and 2003.  Tacchinardi primarily played as a central or defensive midfielder, and was noted for his powerful and accurate long range shooting, as well as his striking ability from volleys, which saw him score several goals from distance during his time with Juventus. A hard-working and tenacious player, with a strong mentality and a wide range of skills, he was predominantly known for his excellent positional sense, anticipation, and tactical intelligence, as well as his tackling ability, which made effective both offensively and defensively, and also allowed him to play as a centre-back on occasion in a zonal marking defensive system. In addition to his aforementioned attributes, he also possessed good technique, vision, and passing range, which allowed him to start attacking plays quickly with long balls after winning back possession, and also enabled him to function as a deep-lying playmaker for his team. 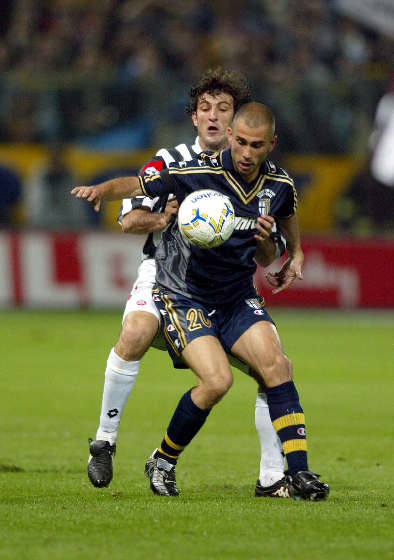 The 2002 Coppa Italia Final was the final of the 2001–02 Coppa Italia, the 54th season of the top cup competition in Italian football. The match was played over two legs on 24 April and 10 May 2002 between Juventus and Parma. The final was won by Parma, who claimed their third Coppa Italia title with an away goals victory after the score was level at 2–2. This was the third Coppa Italia final between these two clubs, after the 1992 and 1995 finals, and the fifth of six major finals between the two sides. 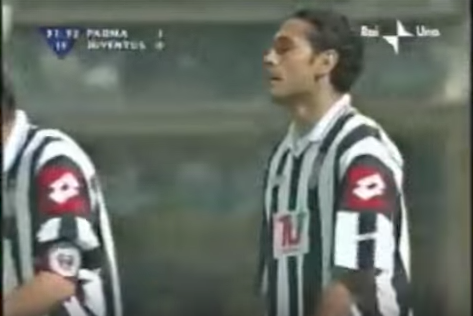 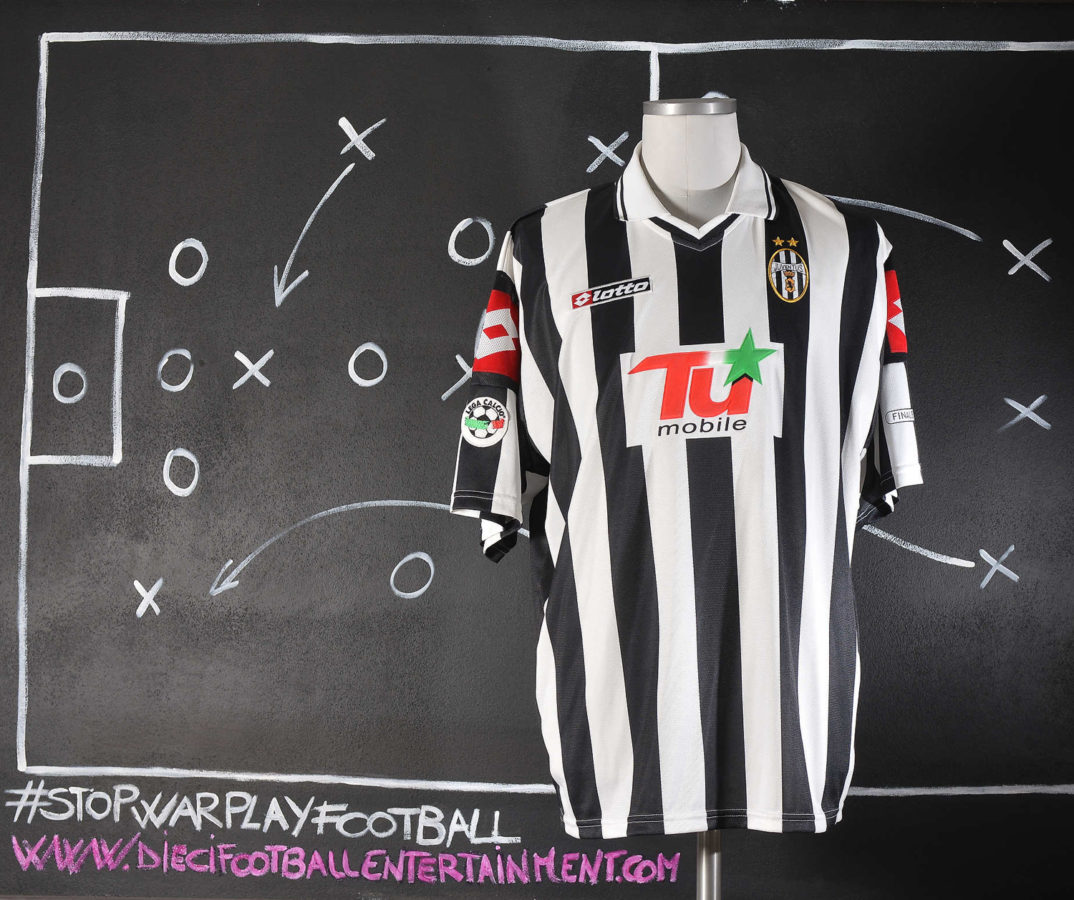 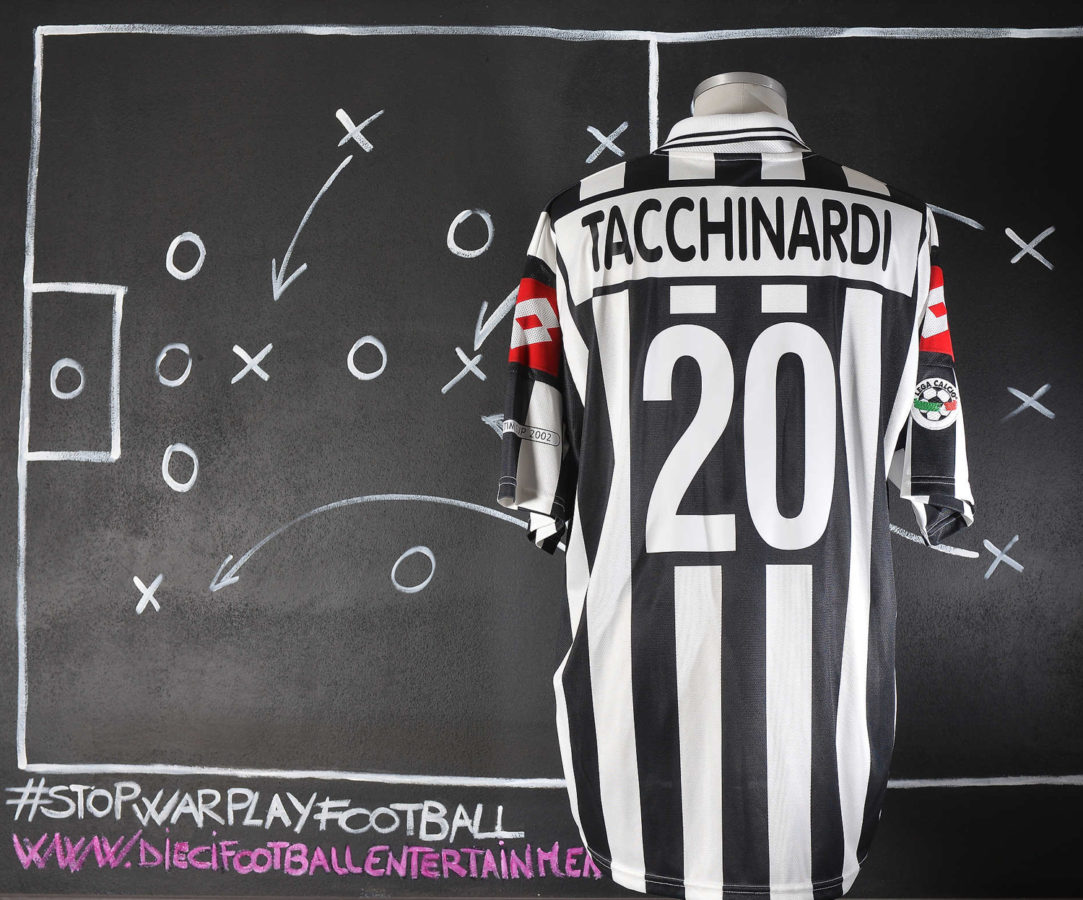 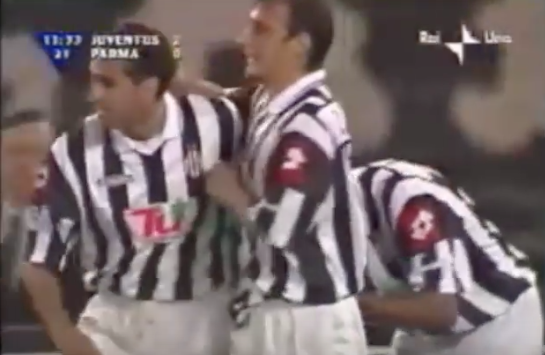 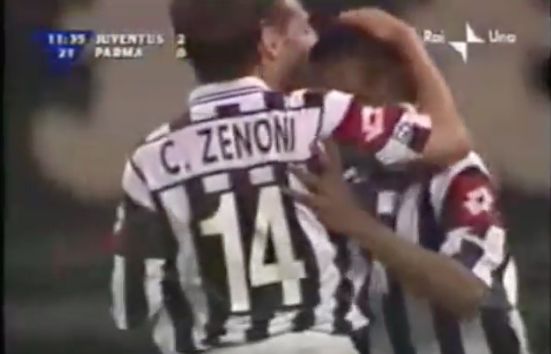 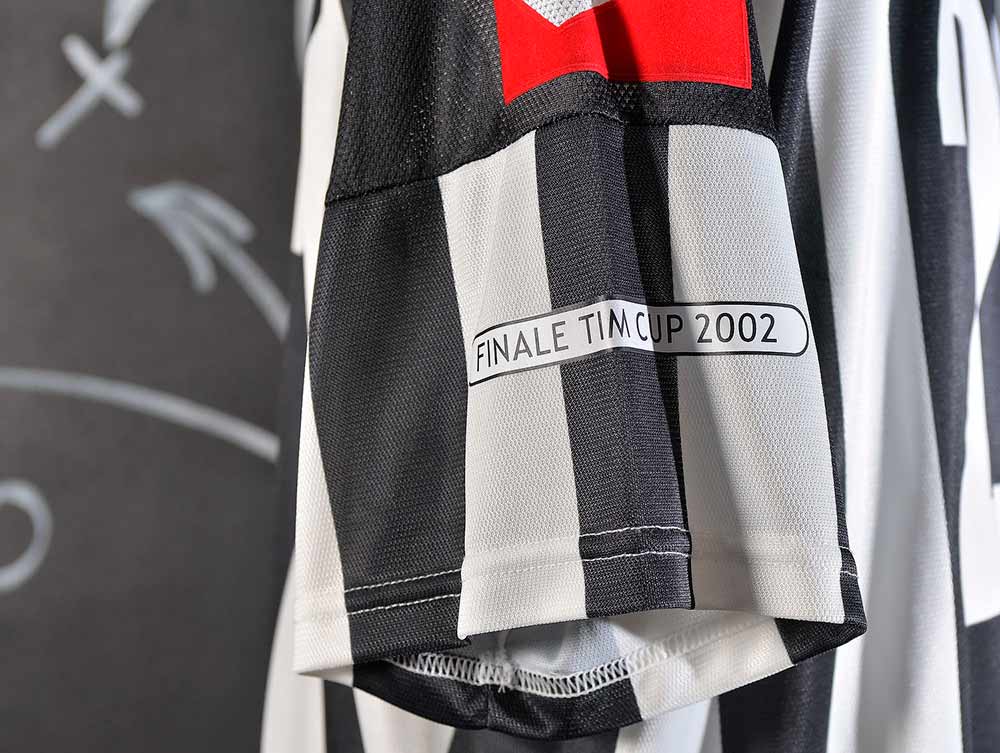 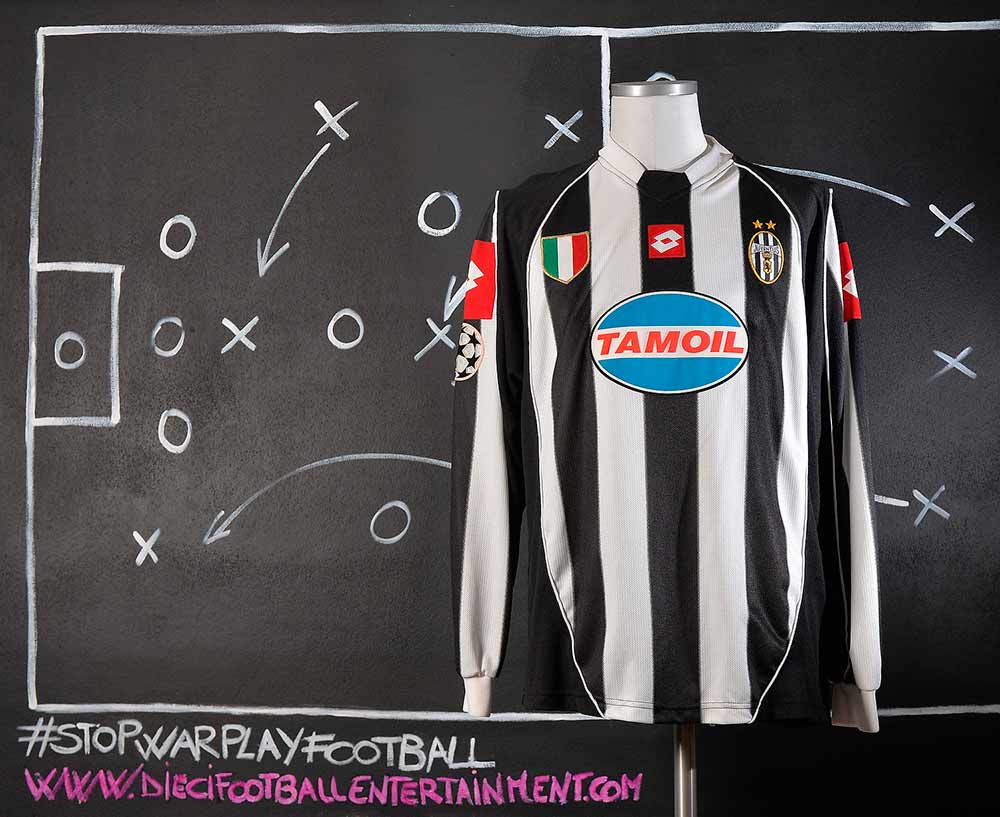 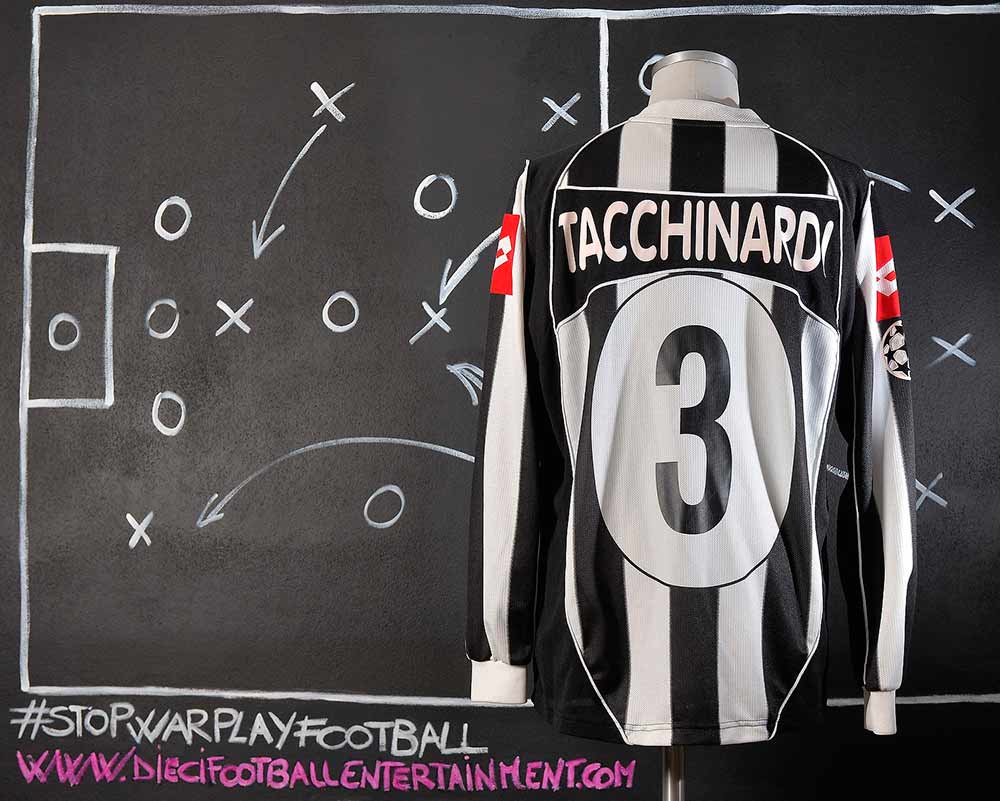 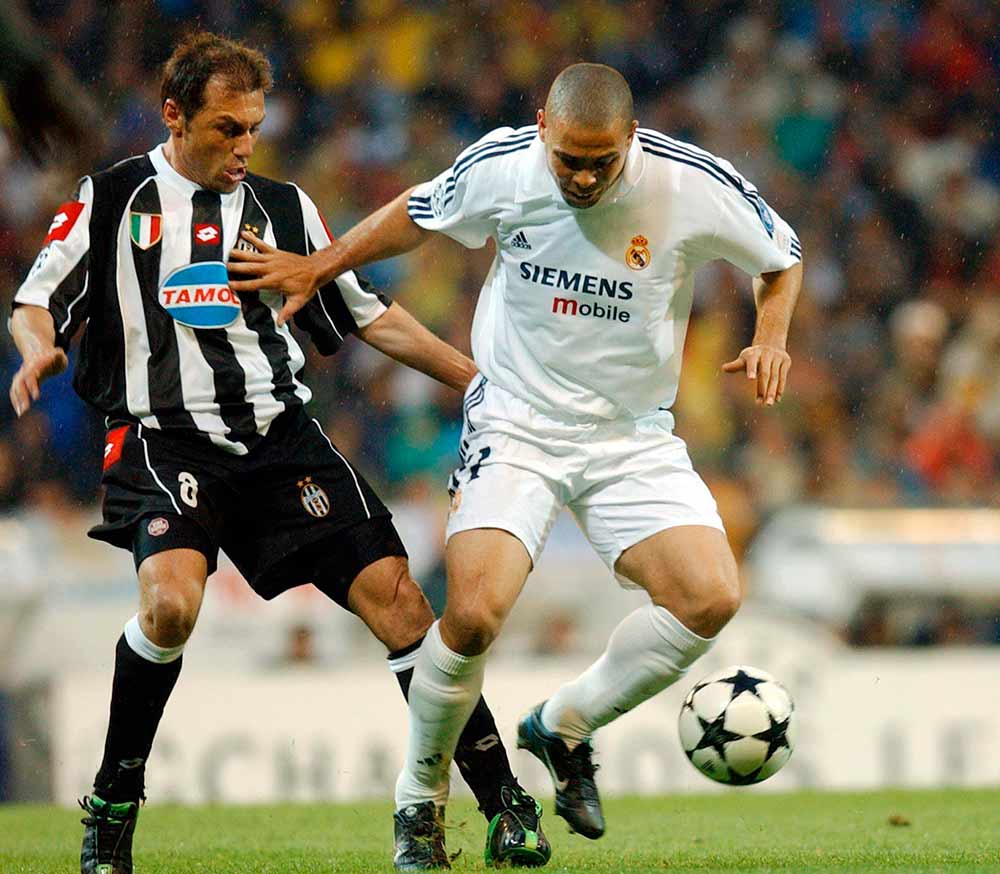 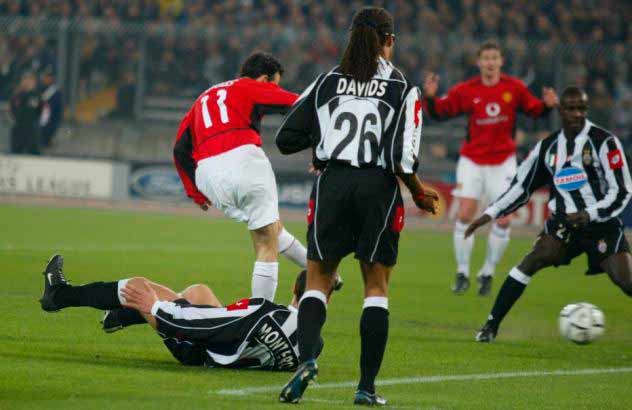 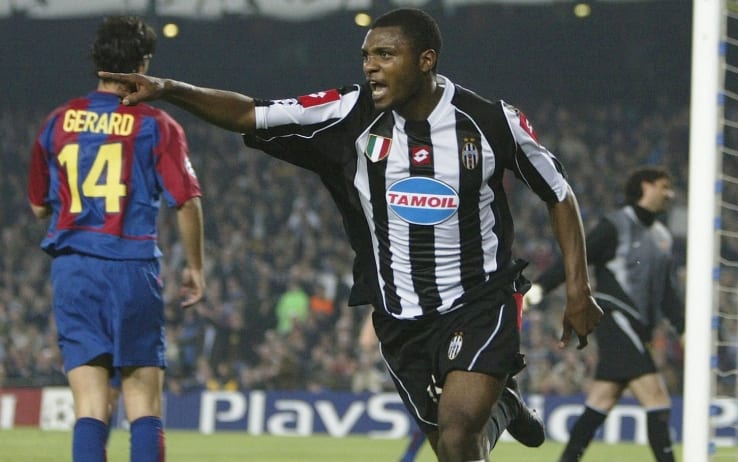 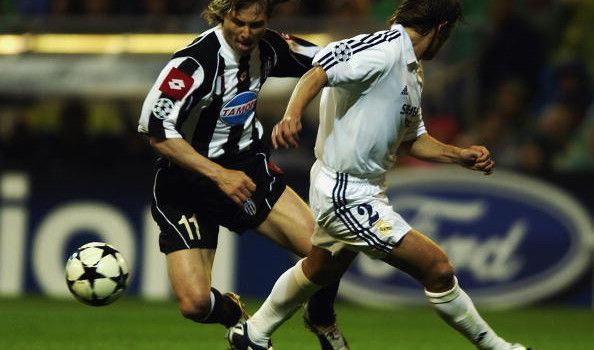 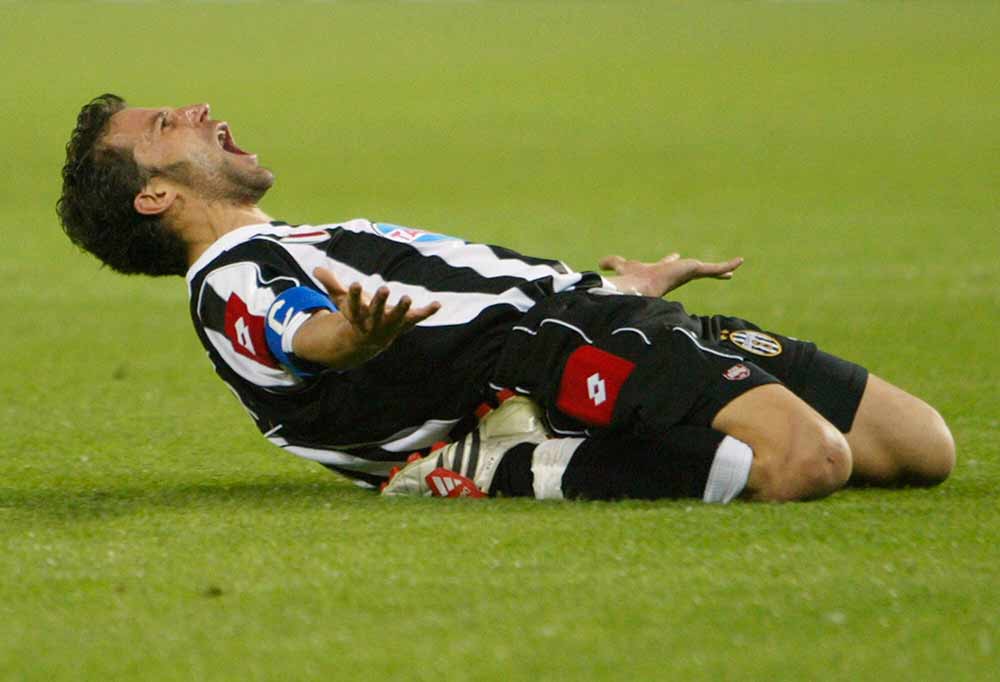 Alessandro Del Piero after he scored against Real Madrid in the second leg of the semi finals. 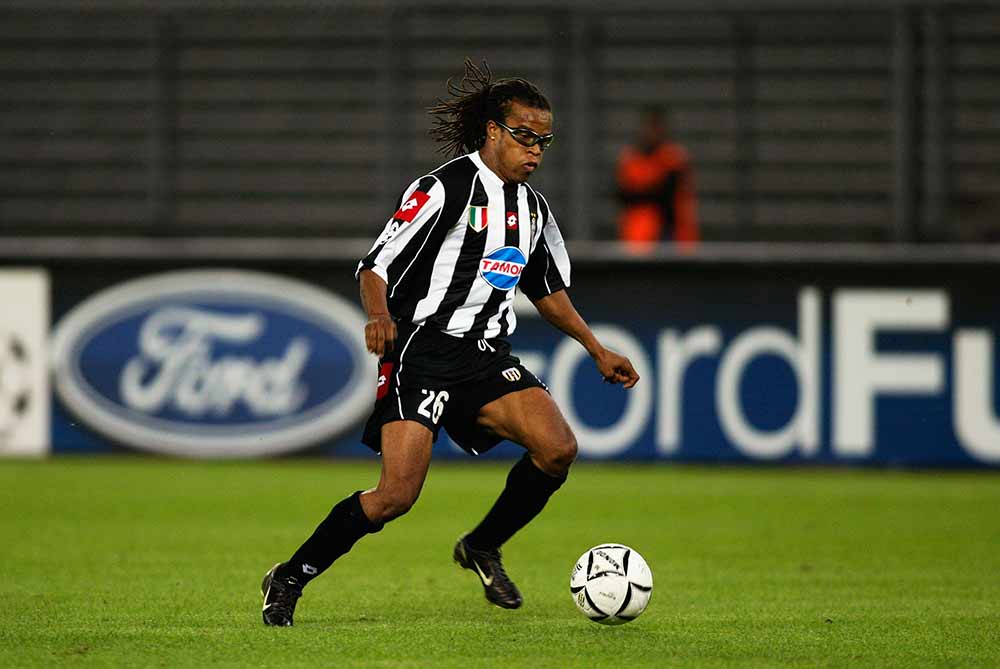 Along with the two Milan clubs, Juventus were one of the three Italian sides who appeared in the semi-finals that season. Juventus knocked out the only remaining non-Italian team, Real Madrid, to set up an all-Italian final with Milan, who had beaten Inter in the other semi-final. The final, played at Old Trafford in Manchester, ended 0–0, with Milan winning on penalties. Normally reliable goalscorer David Trezeguet was among the players who fluffed their attempts. It was Juventus’s best run in the competition since the 1997–98 season, where they had also been beaten finalists. However, the Bianconeri’s run to the final wasn’t exactly a case of plain sailing, and actually involved a lot of tough moments. After impressing in the first group stage, topping their group and conceding just 3 goals in 6 games (the meanest defence of all 32 teams competing), Juventus suffered in the second group stage. Drawn in Group D alongside FC Basel, Deportivo La Coruña, and Manchester United, Juventus began their campaign disastrously, conceding two early goals in La Coruña. The Italians managed to fight back with goals from Alessandro Birindelli and Pavel Nedvěd, but the problems encountered in this fixture would set the tone for the remainder of this group stage. Having beaten Swiss side Basel 4–0 in Turin in December, the Bianconeri were to face Manchester United in their next two games. The first match, played in Old Trafford, saw Juventus send a depleted squad to England after many players caught flu. In spite of this, the Turin club put up a spirited display and only lost 2–1. They were widely expected to make amends in the return leg at the Stadio delle Alpi; but, in front of 59,000 spectactors, the home side collapsed to a 3–0 loss. It was the first time in six Champions League encounters that Juventus had failed to score against United. In the meantime, both Basel and Deportivo had managed to win games, meaning the Italian champions faced an uphill struggle to reach the quarter-finals. In the following game, against Deportivo, Juve were facing the prospect of an early exit with both sides tied at 2–2 and mere minutes remaining. In injury time, Igor Tudor unleashed an unstoppable volley that beat Deportivo keeper José Molina. The victory meant Juventus had a superior head-to-head record against the Spaniards and could only eliminated if they lost their last game in Basel by more than 4 goals. The game was indeed lost, but only by 2–1, giving the Turin side its first quarter-final appearance in the Champions League since the 1998–99 season. More epic games awaited them, with Barcelona next on their agenda. While struggling in their domestic league, Barcelona had impressed in both group stages, topping their group every time and establishing a new record of nine consecutive wins in the competition. The first leg of the quarter-final in Turin finished 1–1, Javier Saviola’s 78th-minute goal equalising Paolo Montero’s early goal. Barcelona appeared to be in a fine position heading into the second leg at the Camp Nou. There, Pavel Nedved scored first for Juventus, but the Catalans soon equalised through Xavi. When Edgar Davids was sent off for repeated fouling the Bianconeri were seemingly doomed, but they held on until extra time; with six minutes left on the clock, substitute Marcelo Zalayeta shocked the Camp Nou with a second goal. 10-man Juventus qualified for the semi-finals, following a game that ranks forever among the club’s greatest European exploits. Even tougher opposition was awaiting them in the following round. Real Madrid had won three of the previous five editions of the competition and presented a star-studded squad with players such as Iker Casillas, Roberto Carlos, Luís Figo, Raúl González, Ronaldo and former Juventus playmaker Zinedine Zidane. They had imperiously seen off the challenge of Manchester United in the quarter-final and were in search of their 10th Champions League title. The first leg was played in Madrid on 6 May. Deploying their usual brand of quick attacking football, the Spaniards put their noses in front with a Ronaldo strike and continued to dominate proceedings, Gianluigi Buffon doing well to save a Zidane free-kick. However, on the stroke of half time, David Trezeguet silenced the Santiago Bernabéu with an equaliser. The second half saw Real continue to dominate, but with much less success than they had against Manchester United in the previous round. Roberto Carlos did grab a second goal for the home side, but the Juventus performance had sown the seeds of doubt in the previously confident Madridistas. The return leg on 14 May turned out to be a completely different affair. Criticised for their defensive approach in Madrid, Juventus set out to attack on their home turf and were rewarded for their efforts with just 12 minutes gone. A fine collective move saw Gianluca Zambrotta cross from deep for Alessandro Del Piero, who headed back into the six-yard box for David Trezeguet to smash home. Madrid were all over the place and found no response to the Italians’ unexpected all-out attack attitude. Just before half time, Alessandro Del Piero tormented the Real Madrid defence in their own penalty area with his twists and turns, and beat Iker Casillas at his near post with a well-placed shot. Del Piero thus maintained his tradition of scoring key goals against Real Madrid, having already done so as a 21-year-old in a 1996 quarter-final tie. The Spaniards played better in the second half and earned a penalty after 65 minutes. Gianluigi Buffon delivered a rare penalty save to deny Luís Figo, thus keeping his side’s two-goal advantage. On 73 minutes, Pavel Nedvěd delivered the final nail into Madrid’s coffin with a thunderous volley that beat the hapless Casillas. Unfortunately, he was booked for a silly foul minutes later, meaning he would miss the final through suspension. On 89 minutes, Zidane, playing on the pitch which had been his home for five seasons, pulled one back for Real Madrid, but the Spaniards ultimately got what they deserved, having been comprehensively outplayed by their opponents. 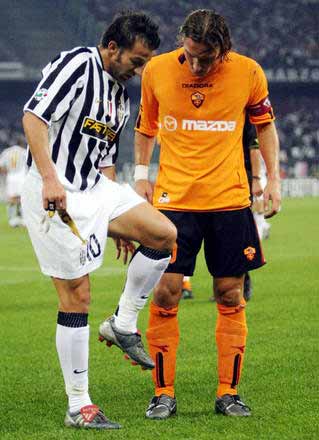 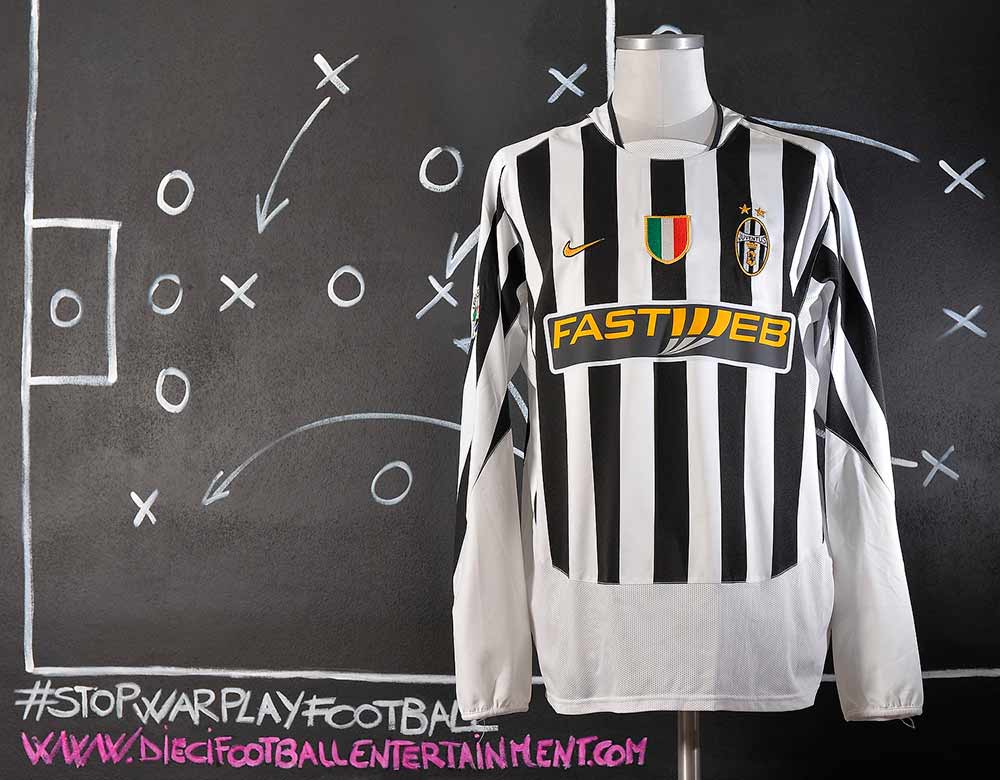 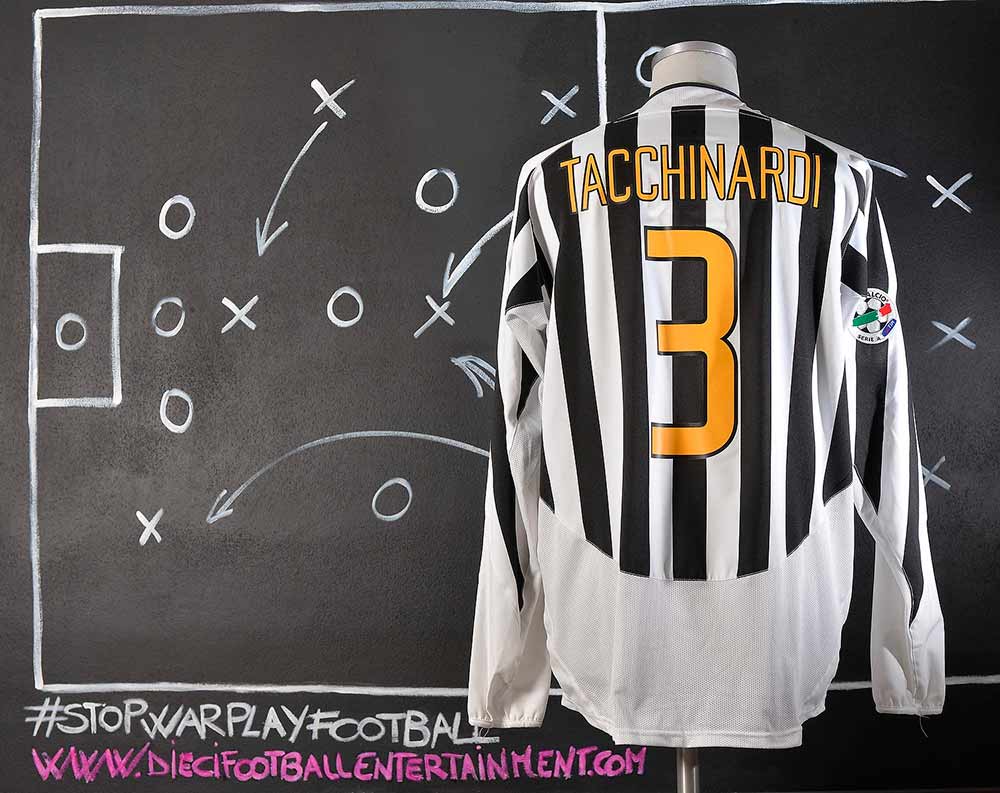 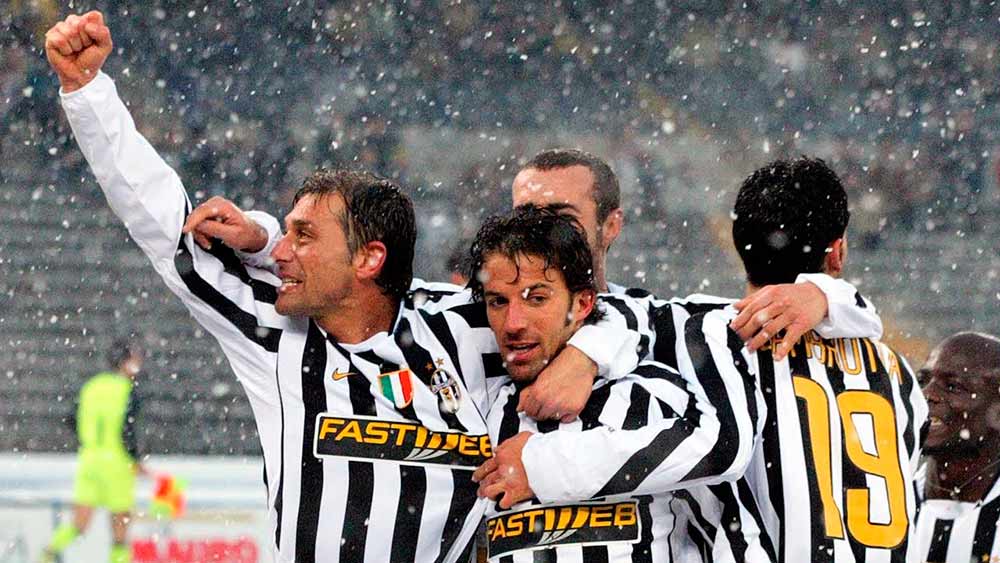 Grosso Grosso2020-01-05T22:46:18+00:00
Page load link
This site uses cookie technology, including third parties' ones. If you want to know more click here. If you access any element of this site outside this banner, you consent to the use of cookies. Ok
Go to Top