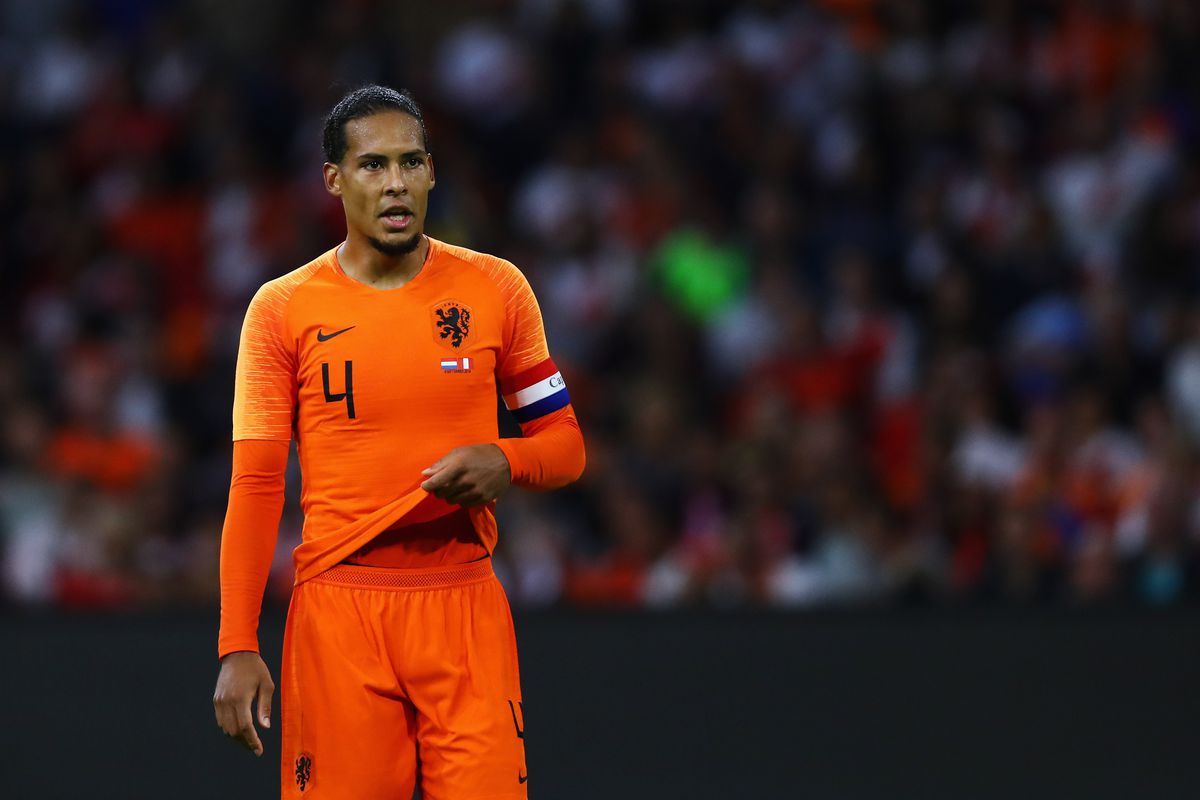 Virgil van Dijk is a Dutch professional footballer who plays as a centre-back and captains the Netherlands national team. Considered to be one of the best defenders in the world, he is known for his strength, leadership and aerial ability. In 2019 he was named the UEFA Men’s Player of the Year, and finished runner-up for the Ballon d’Or and The Best FIFA Men’s Player. After beginning his professional career with Groningen, Van Dijk moved to Celtic in 2013, where he won the Scottish Premiership and was named in the PFA Scotland Team of the Year in both of his seasons with the club, also winning the Scottish League Cup in the latter. In September 2015, he joined Premier League side Southampton before signing for Liverpool in January 2018 for £75 million, a world record transfer fee for a defender at the time. Van Dijk was involved in reaching the 2018 UEFA Champions League Final during his first spring at Liverpool. In his first full season at the club Van Dijk was named the PFA Player of the Year and the Premier League Player of the Season for the 2018–19 season. Van Dijk starred as Liverpool won the 2019 UEFA Champions League Final where he was named man of the match. The following season he played in the club’s victorious 2019 FIFA Club World Cup Final. 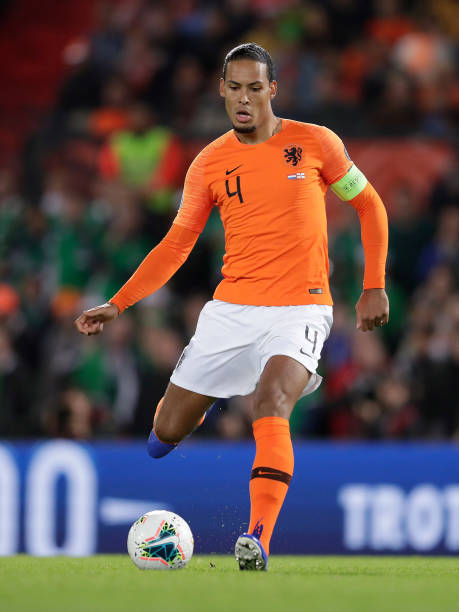 This shirt was worn by Virgil Van Dijk during the first half of the “Euro 2020” qualifying game between Netherlands and Northern Ireland which took place in Rotterdam, “Stadion Feijenoord”, on October 10th 2019. Netherlands defeated Northern Ireland 3-1. The shirt was swapped by Van Dijk with a Northern Ireland player who we got the shirt from. Van Dijk made his full international debut for Netherlands on 10 October 2015, in a 2–1 victory away from home against Kazakhstan in a UEFA Euro 2016 qualifier. He was awarded the captaincy of his country by manager Ronald Koeman on 22 March 2018, and his first match as captain was a 1–0 home friendly defeat by England the next day. On 26 March, he scored his first international goal to conclude a 3–0 win over European champions Portugal at the Stade de Genève. 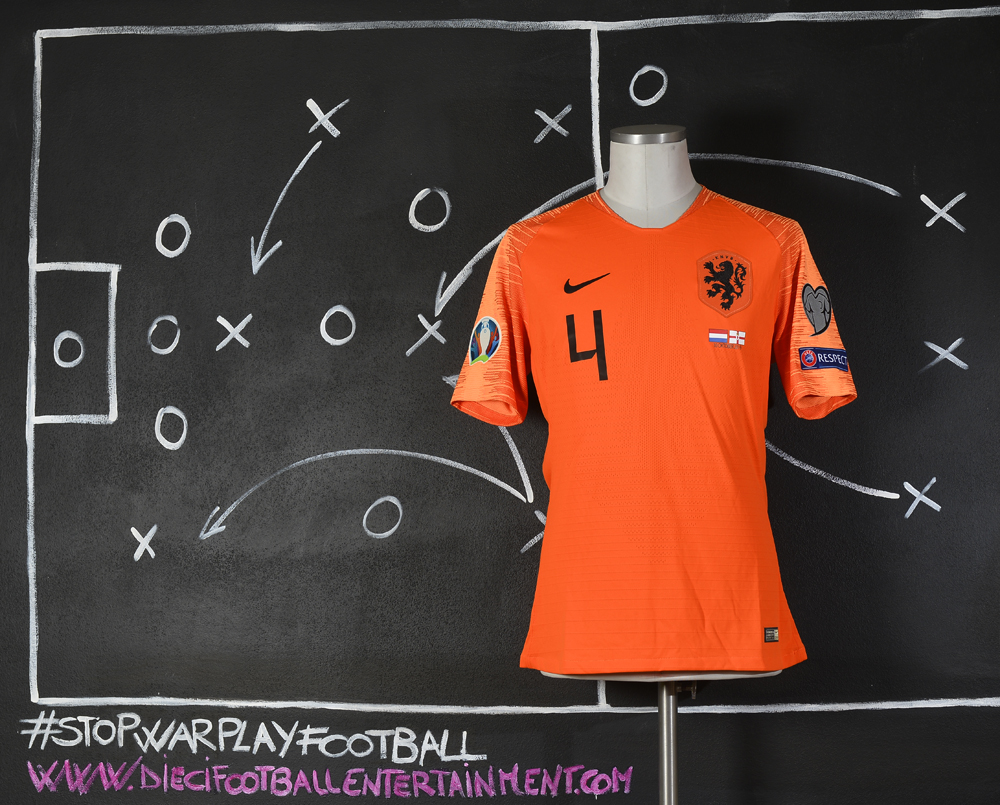 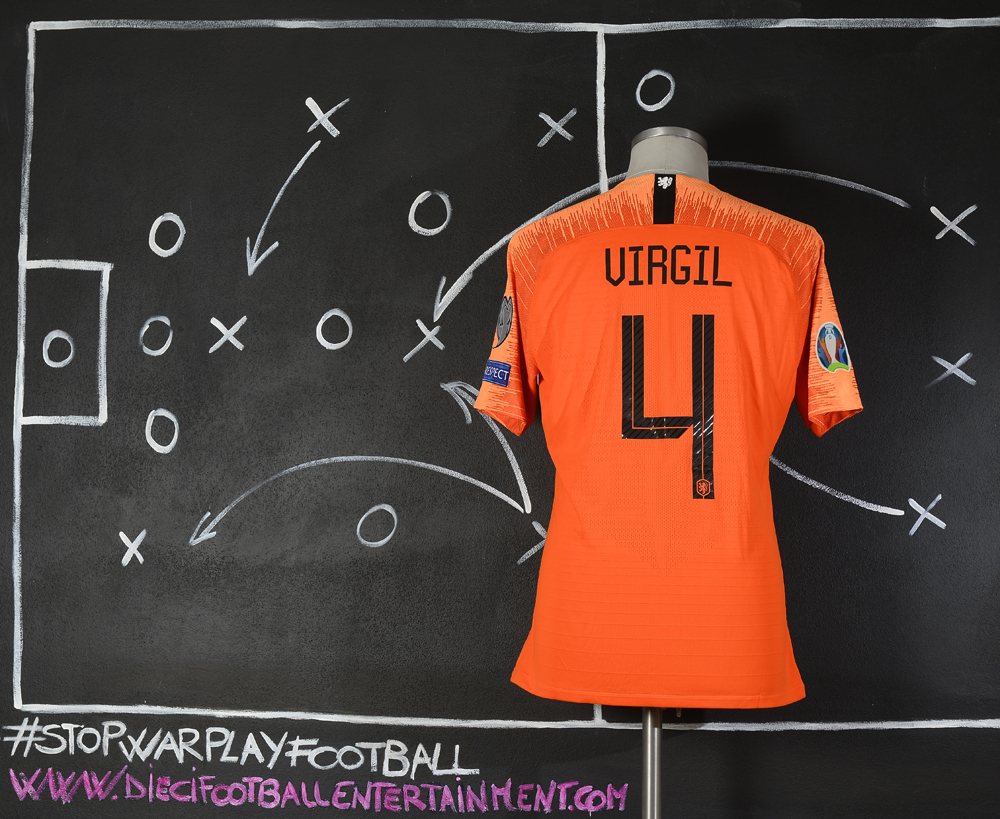 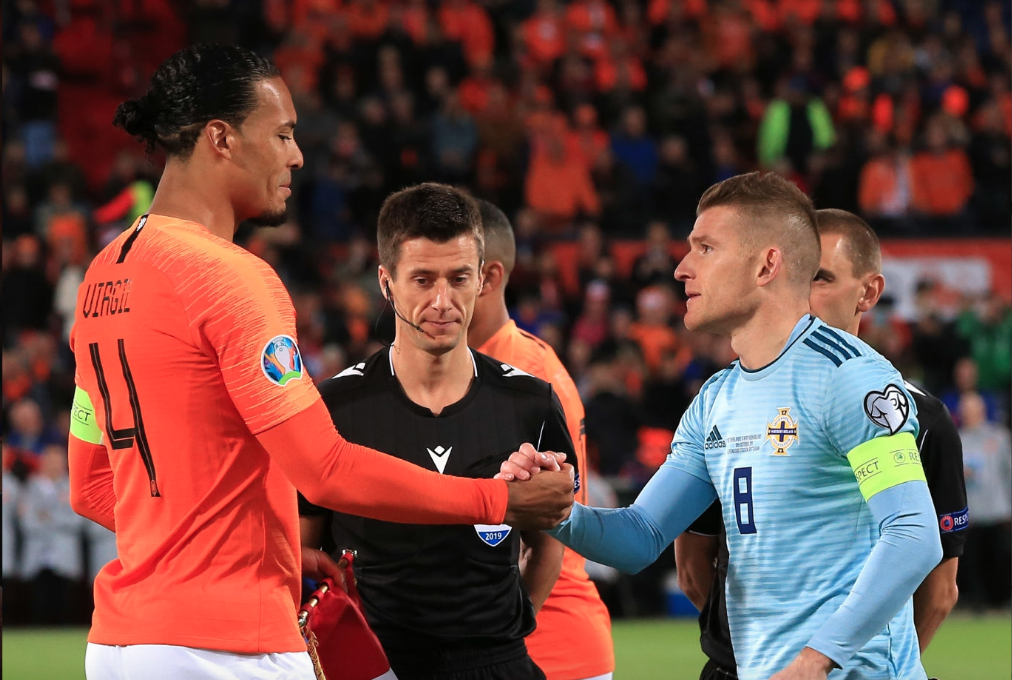 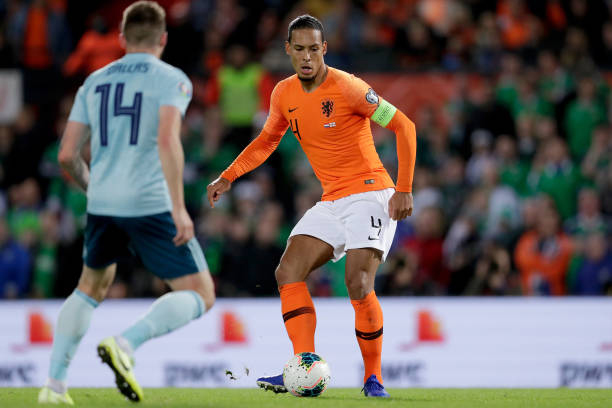 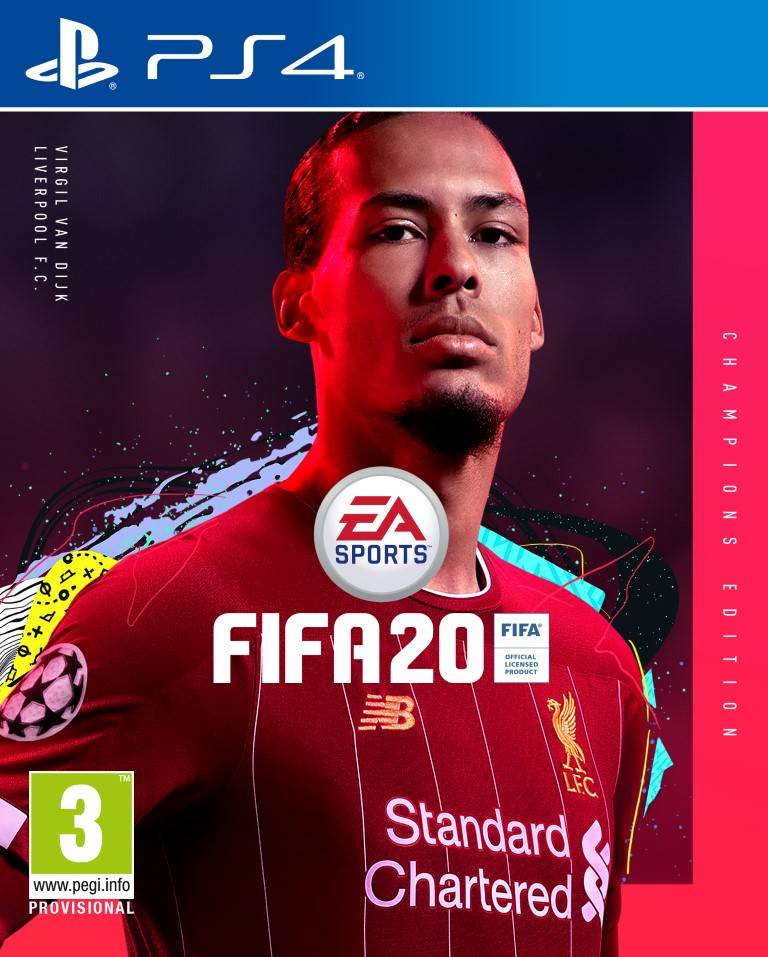 Van Dijk was born in Breda to a Dutch father and a Surinamese mother. Growing up he would play football wherever he could – on the streets, in concrete cages, and eventually Saturday morning matches. He combined his time playing at the Willem II academy with a part-time job as a dishwasher. Having previously and unsuccessfully featured as a right-back, Van Dijk was shifted into a central defensive position in 2008, aged 17, after he grew in height by around 18 centimetres. Despite the positional shift and Van Dijk’s physical growth, Willem II’s reserve manager at the time Edwin Hermans believed he had “too many limitations” which prevented him from breaking into the first team. In 2010, he was scouted by former Dutch international Martin Koeman, who was working for FC Groningen at the time, and he ended up completing a free transfer to the club in the same year. In a 2019 interview with Marca, when Lionel Messi was asked why Van Dijk was so difficult to beat, the Argentine responded: “He is a defender who knows how to judge his timing and wait for the right moment to challenge or jockey. He is very fast and big, but he has a lot of agility for his height. He is fast because of its great stride, and he is impressive both in defence and attack because he scores lots of goals”. Van Dijk features as the cover star of the champions edition of EA Sports’ FIFA video game FIFA 20. He is endorsed by sportswear company Nike. 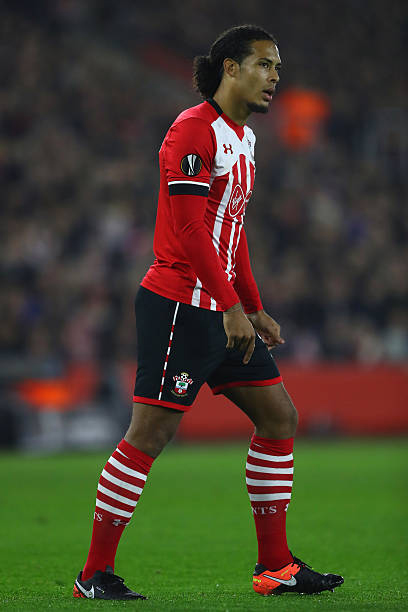 Van Dijk is a physically strong, right-footed centre-back, who usually features on the left-hand side of central defence, although he can also play as a right-sided centre-back. He is gifted with pace, good technique, and an eye for goal, and is an effective set-piece taker. Regarding his ability, former Celtic teammate Kris Commons commented that van Dijk was “comfortable on the ball”, also noting that “He had good technique and a wonderful right foot. He was good on set-pieces, some of the free-kicks he scored for Celtic are absolute wonders. He could read the game well. He had an aura about him, a confidence, because I think he knew he was good.” Neil McGuinness, senior scout at Celtic when Van Dijk was signed, called him “everything you would want if you could create a profile of the ideal central defender”, praising him as a “very smooth ball-playing defender” who possesses aerial prowess, skills from dead ball situations, and “strong leadership qualities”, while commenting that since his move to England, he is “more tactically aware now […] his anticipation and timing has improved and he is a lot more of an all-rounder”. McGuinness believes Van Dijk’s “biggest problem” is that he “can switch off when the game is comfortable”. Van Dijk commonly uses only his first name on the kit. According to his uncle Steven, this is because of a feud with his father. 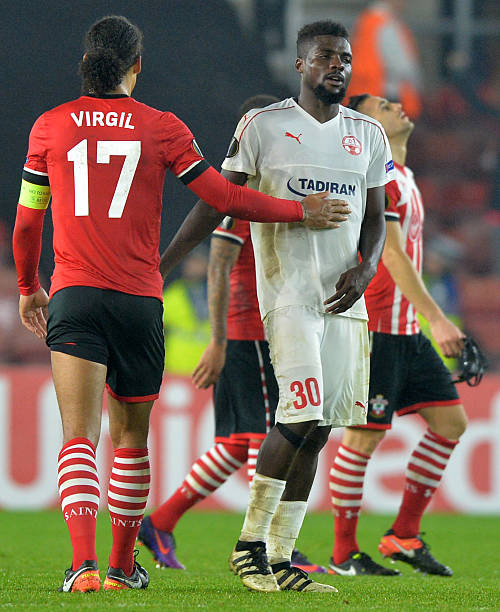 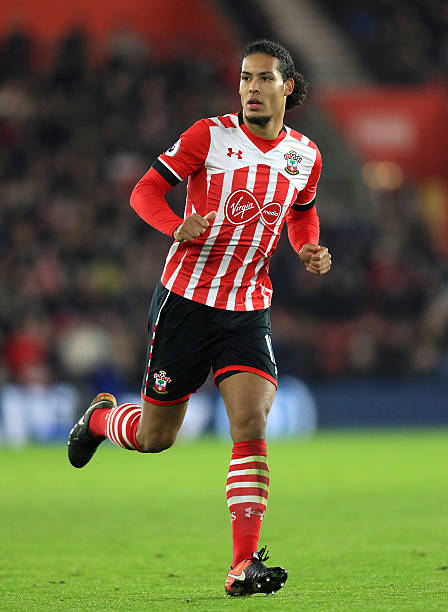 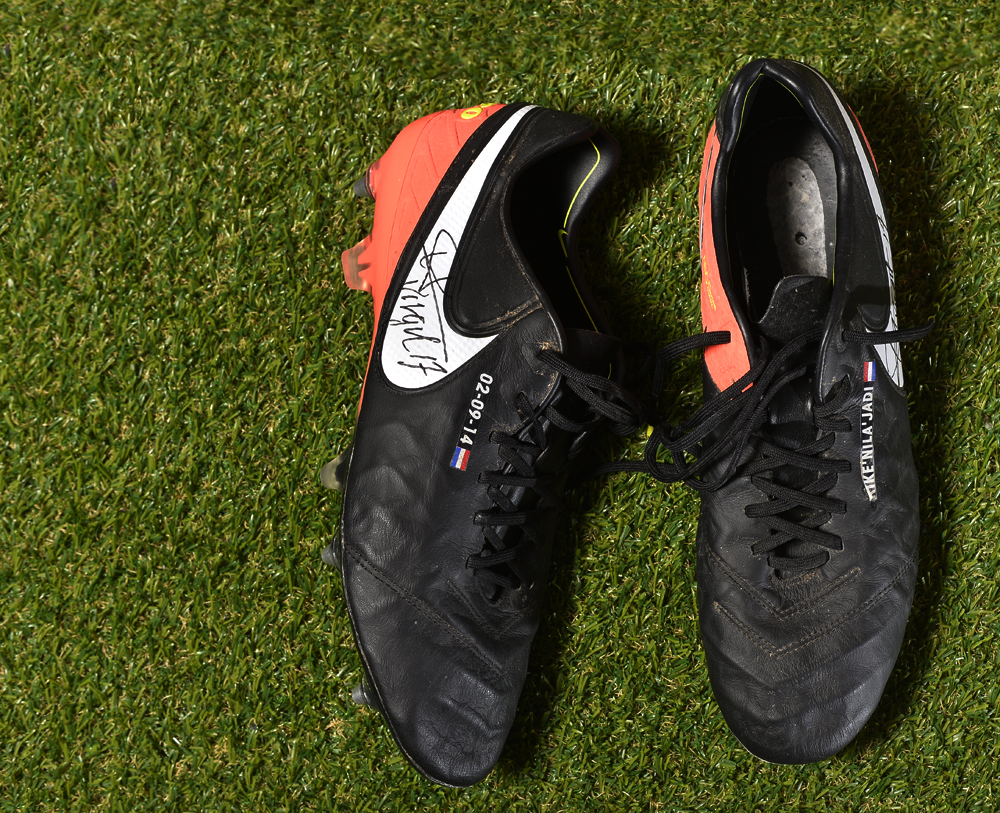 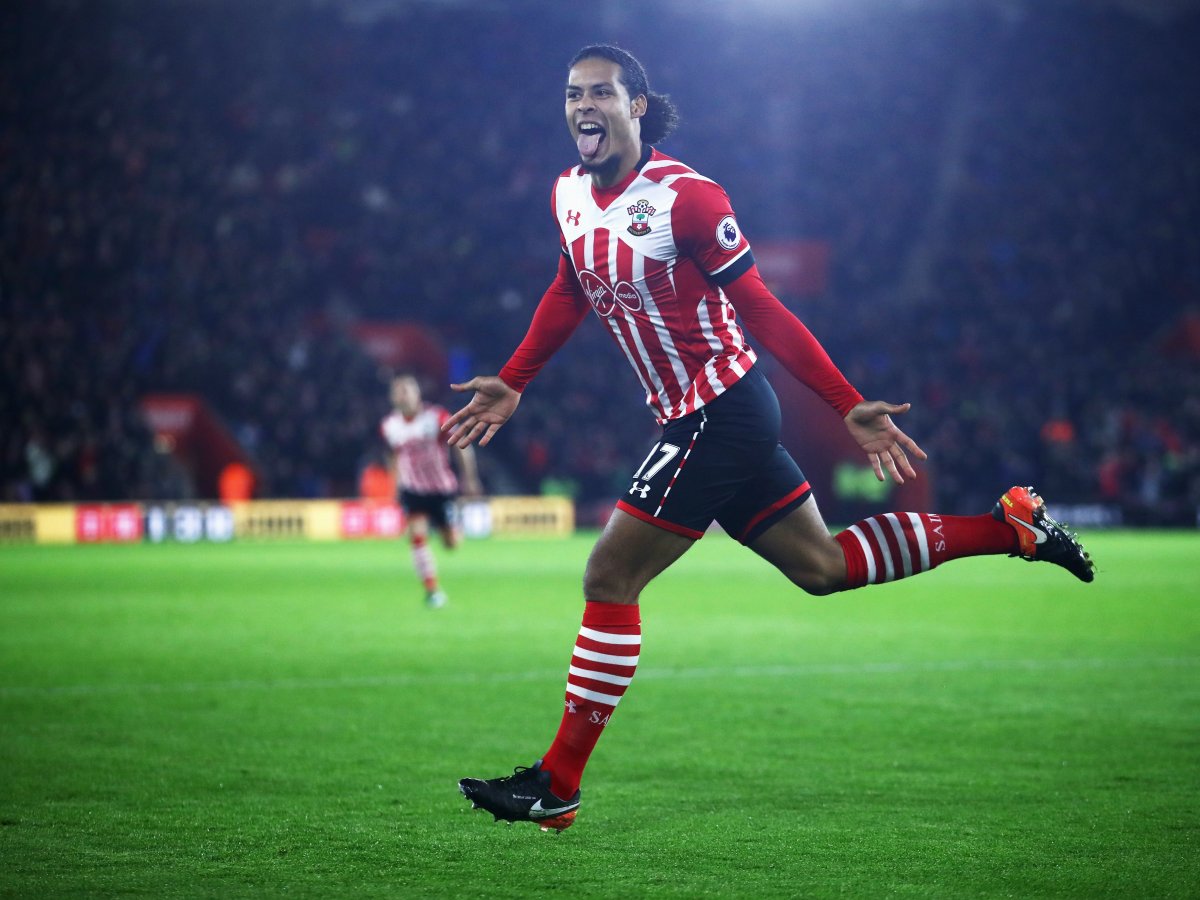 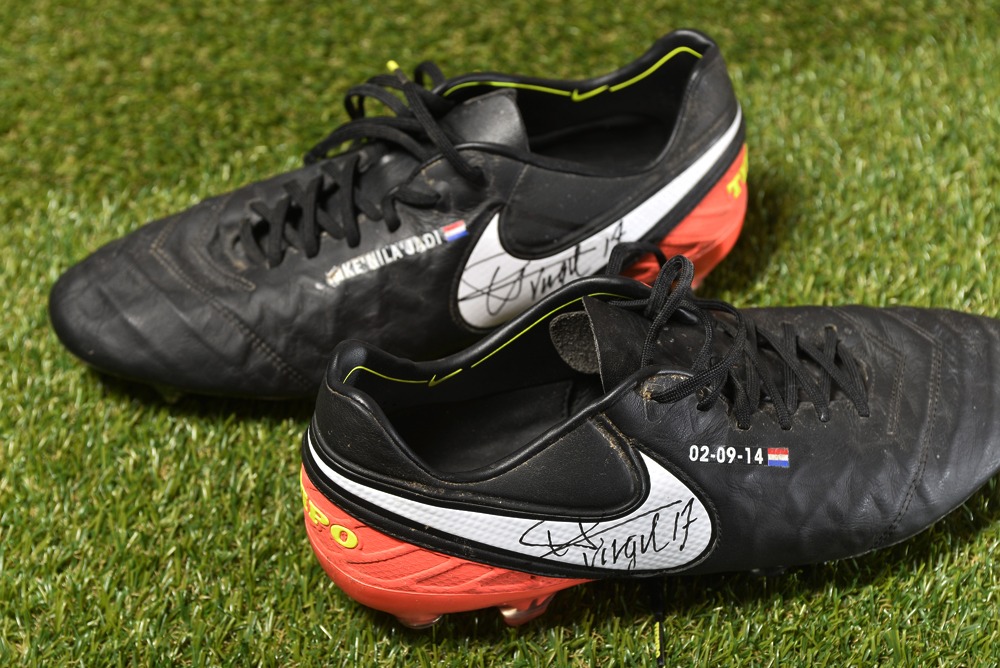 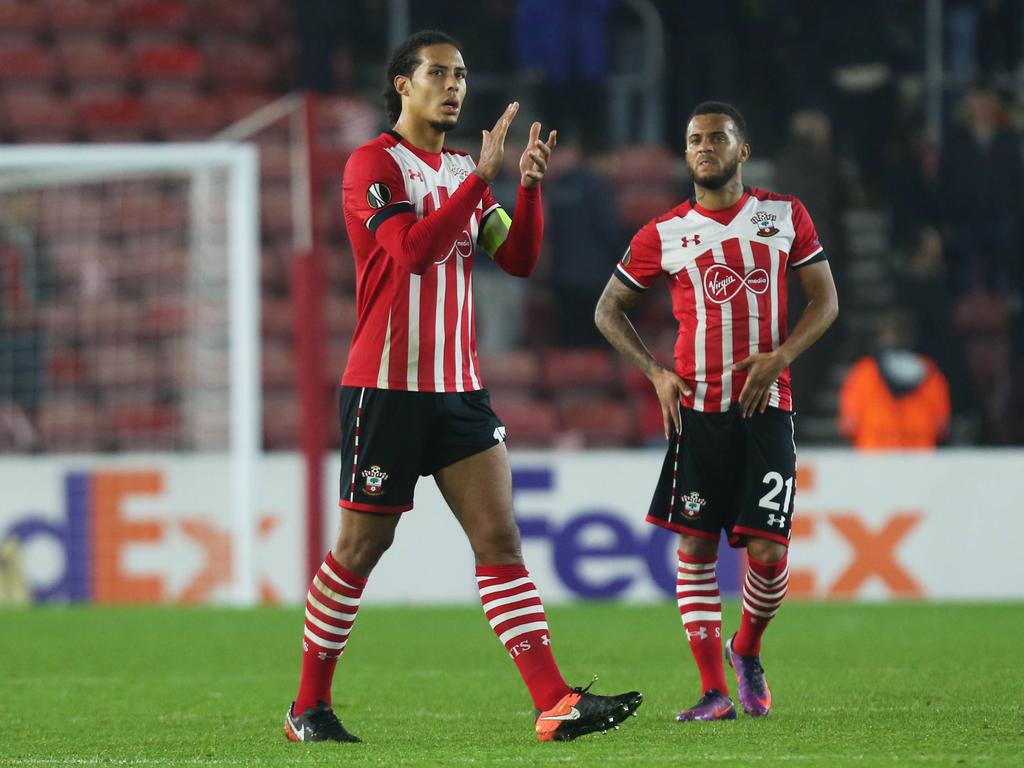 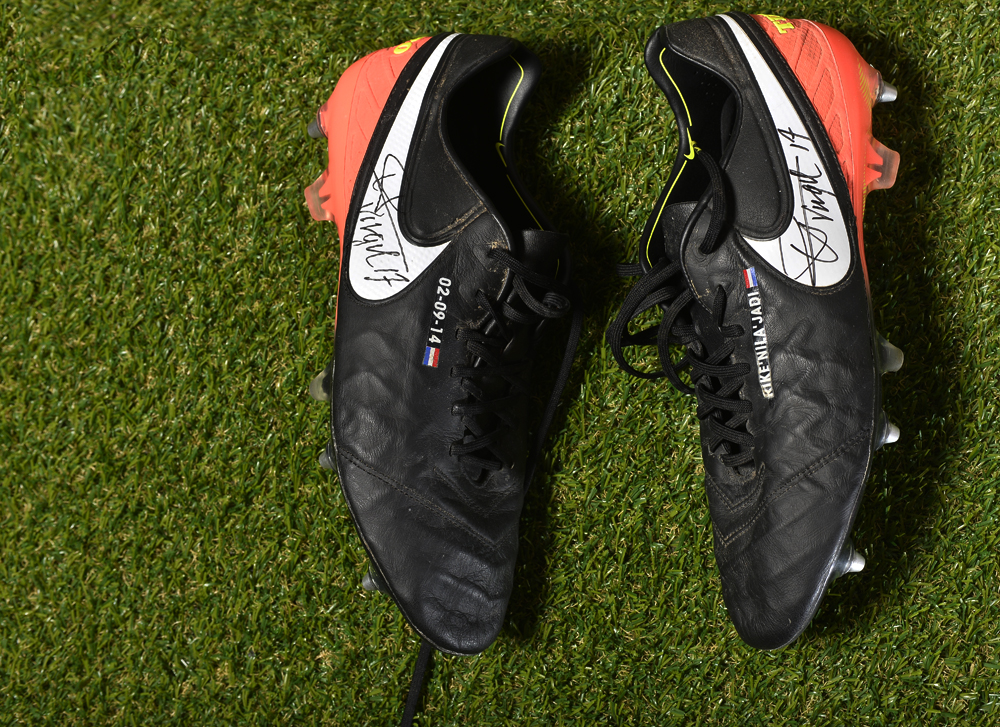 Grosso Grosso2020-03-25T05:20:39+00:00
Page load link
This site uses cookie technology, including third parties' ones. If you want to know more click here. If you access any element of this site outside this banner, you consent to the use of cookies. Ok
Go to Top